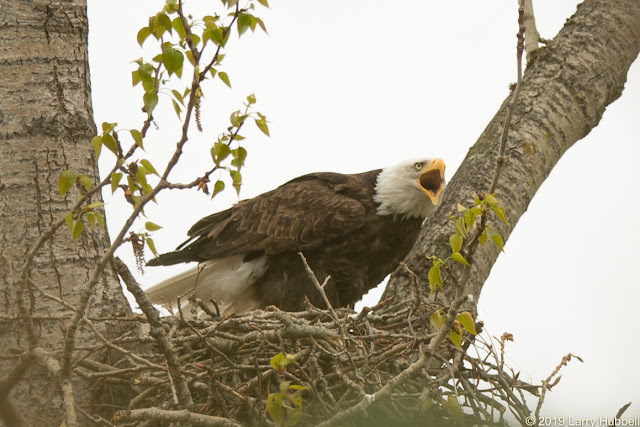 In early April, Marsha's vocal defense of her Montlake Cut nest seemed to imply the existence of eggs. The invisible tether which kept either her, or her mate Monty, constantly close to the nest reinforced the idea that they were defending eggs. Given the height of the nest, I am not positive when the eggs were laid, but my best guess is the last week of March.

Surprisingly, Bald Eagle eggs are not as big as one might expect. All About Birds gives the maximum length as 3.3 inches and maximum width as 2.5 inches. A large Bald Eagle egg is probably similar in volume to a professional baseball, which is just under 3 inches in diameter.

By the way, Why might we say that Monty and Marsha's nest is the most strategically placed eagle's nest in all of Seattle? Read on for the answer. 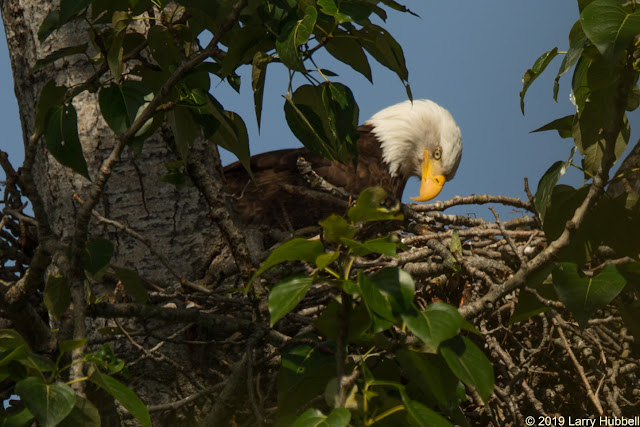 It takes roughly five weeks to properly incubate Bald Eagle eggs. Which means the eaglet(s) most likely hatched out in early May. In this May 3rd photo, Marsha may be looking down at a helpless little hatchling. It is also interesting to note how the cottonwood leaves have grown and were beginning to hide the nest. 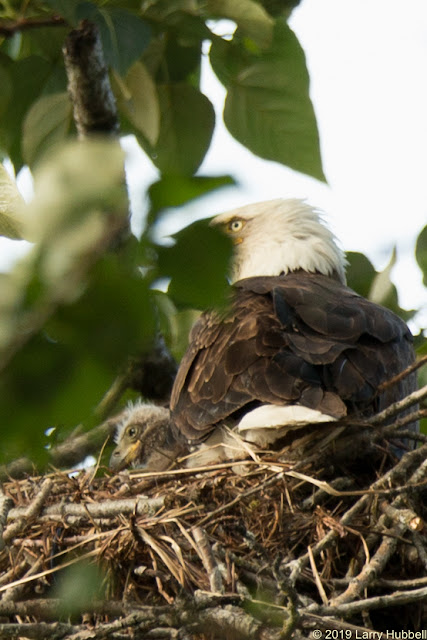 This mid-May photo shows a first glimpse of a young eaglet in the nest. Is this eaglet an only child? All About Birds states that the brood sizes can range from one to three birds. Unlike ducks, a clutch of eagle eggs does not hatch at the same time. Younger eaglets tend to be smaller and can lose out in the competition for food. In fact, they can even become food for older siblings. The parents bring lots of food and offer it freely, but the older and stronger eaglets are more aggressive and generally eat better. 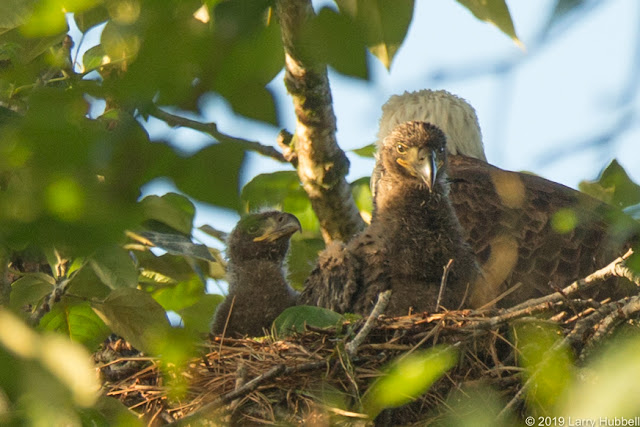 During the last week of May I caught my first sightings of multiple eaglets in the nest. Clearly, a feather transition was taking place. As the eaglets get older their initial downy white/gray feathers disappear and new darker feathers grow in.

At the same time, the cottonwood leaves and limbs continued to grow. It felt like a curtain was being drawn around the nest. The mystery deepened. Are there just two eaglets in the nest? Could there be three? 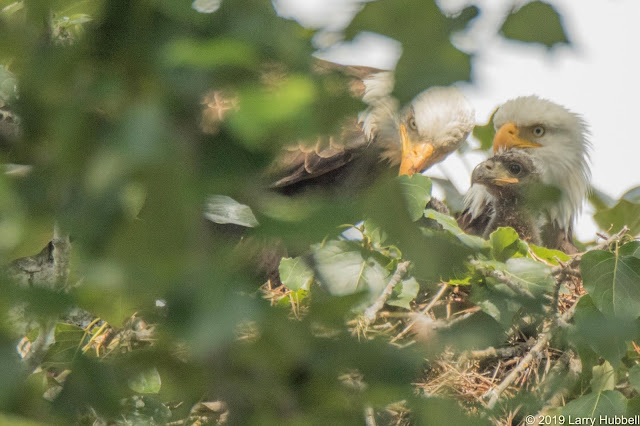 The adults with their white heads and tails and their larger physical size are generally pretty visible in the nest. The young, on the other hand, are often invisible when resting below the rim of the nest. Many times all that can be seen of a young eaglet is a momentary flash of a dark little wing tracing an arc above the rim as the small bird twists or turns. 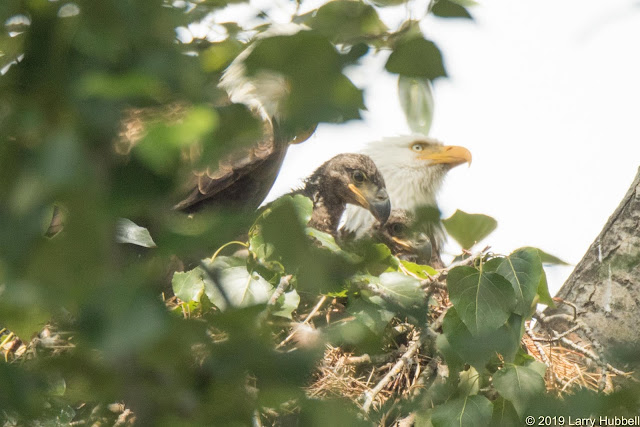 In this photo, the adult eagle on the right is Monty. His 'eyebrow' does not hang down over his eye. This is one of just a few photos which shows the heads of two eaglets and parts of both adults all at the same time. 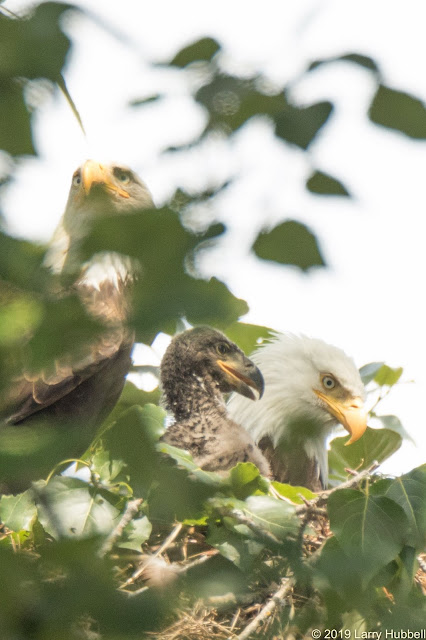 Monty's open-eyed appearance (on the right) gives him a less ferocious look, when compared with Marsha. 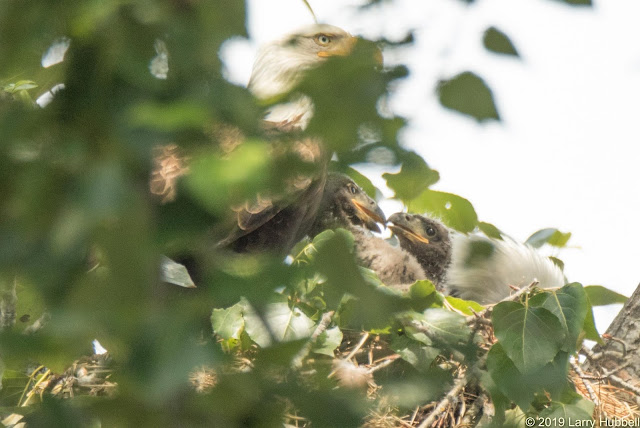 In the top center you get just a profile glimpse of Marsha's perpetual frown. From this angle these two eaglets appear to be fairly similar in size. When these two snap at each other it looks like a fairly, evenly-balanced sibling negotiation. Maybe they are simply focused on gaining elbow room for their growing wings. 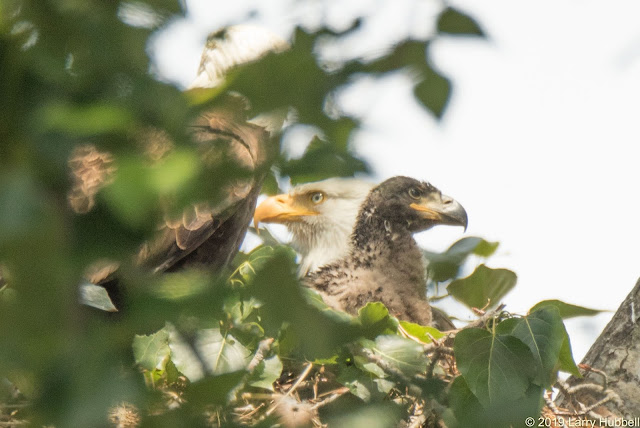 When this eaglet stands tall the transition away from soft grey feathers becomes even more apparent. Clearly, this one is an older eaglet. 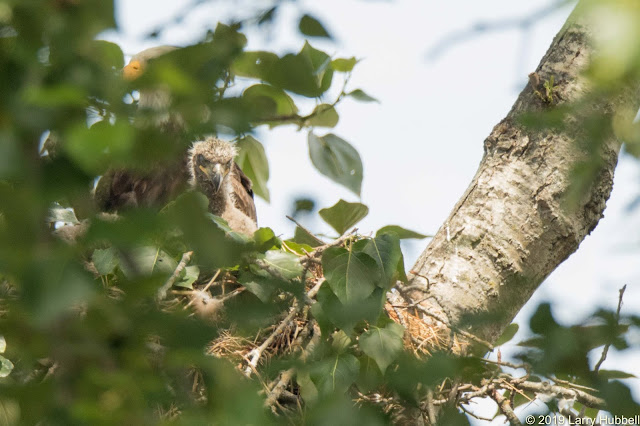 This photo was taken on the same day as the previous few photos. The question is, Do the white fuzzy feathers indicate a third younger eaglet or is this just one of the two previously seen eaglets who is uniquely illuminated so that the fuzzy feathers stand out? 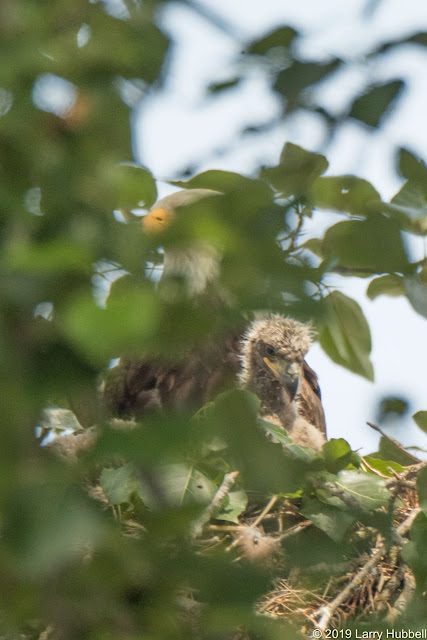 When I took the photos the idea of a third eaglet did not come to mind. I am reconsidering. 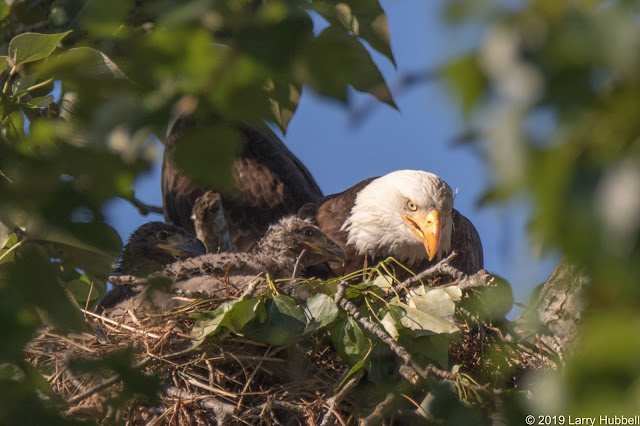 The next day, I caught a few more photos. In this one there are two eaglets visible. The one on the left looks older and darker, although the shade may be a factor. The eaglet in the center still has some light downy feathering. 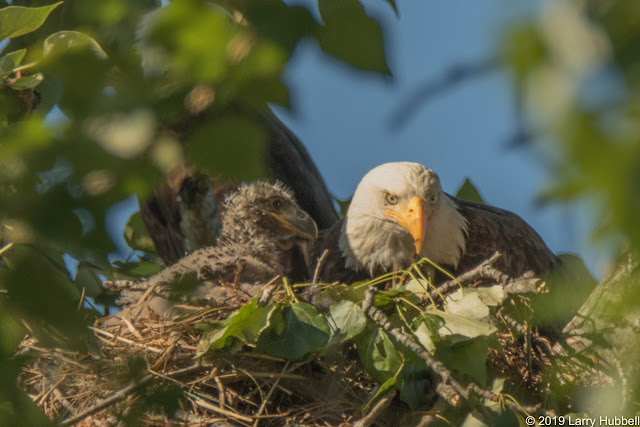 Getting an accurate count of eaglets in the nest remains an unresolved mystery. 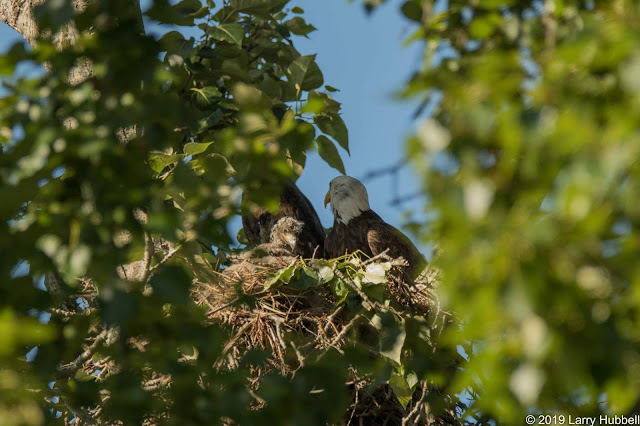 As they get older and larger the answer will become apparent. If you are the first to spot three in the tree, I would love to hear about it.

In just three months, e.g. by August 1st, the young Bald Eagles will probably have an average weight of about ten pounds. At that point, each of the eaglets should weigh more than their parent of the same gender. Males will generally weigh less then average while females usually weigh more. Between now and August the changes will be rapid, they will be putting on weight, growing flight feathers and hopefully in late July we will get to watch them exercising their wings, while bouncing around from one limb to the next, just prior to taking to the air.

In 1916, when the Montlake Cut opened for business it rerouted the drainage of the Lake Washington Watershed. The Black River, which was the original southern outlet for the lake, dried up. When the river disappeared so did many of the native salmon runs which accessed their spawning grounds via the river and Lake Washington. You can read more details of the story by clicking on History Link.

Additional salmon, and other species of fish, have since been introduced to Lake Washington. For migrating fish the only connection between the Lake Washington Watershed and the Pacific Ocean is via Montlake Cut. Young salmon, and any other migrating fish must pass through The Cut on their way out to sea and years later when they mature they must return the same way to reach their spawning grounds.

To the best of my knowledge Monty and Marsha are the first pair of eagles to locate a nest almost directly over The Cut. From their nest in the Cottonwood tree, on the Southeast corner of The Cut, they have a clear view of the water and easy access to passing fish. Their Montlake Cut nest may be the most strategically located eagle's nest in all of Seattle.

If we help salmon recover in the Lake Washington Watershed we will see life flourish in and around Union Bay. We will see the growing numbers of a wide variety of creatures. In addition to Bald Eagles a few of the other direct beneficiaries will be herons, osprey, kingfishers, cormorants, mergansers, river otters and further downstream even the Orcas would benefit.

Changes we can encourage include improvements to Arboretum Creek (e.g. increasing water flow, removing pollutants and returning the stream to the surface) in addition someday we might also consider improving Montlake Cut. Along the edge of The Cut a protective passage could be designed to protect young outgoing salmon on their way to Puget Sound and the Pacific Ocean. It could be something similar to the work which was done along Elliot Bay. 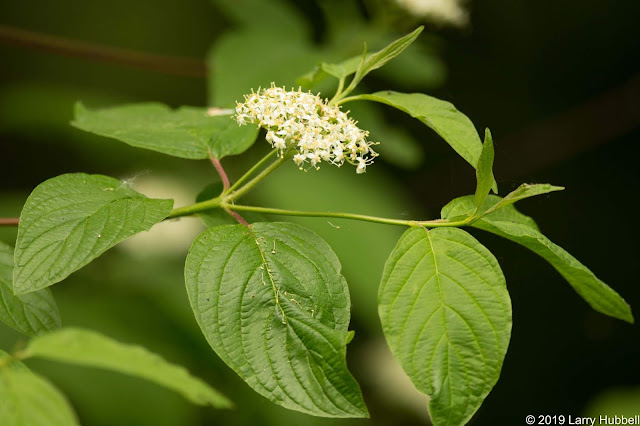 Red-osier Dogwood: You can read more about this unique dogwood by clicking on the highlighted link.

Posted by Larry Hubbell at 1:40 PM