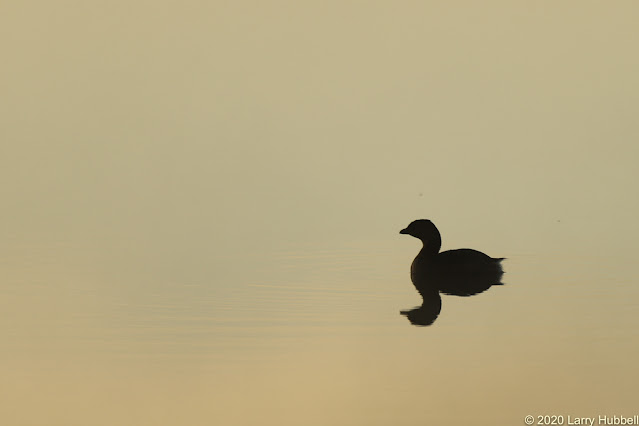 Earlier this month, I visited Yesler Swamp on the north side of Union Bay. I was looking for Trumpeter Swans. I found a Pied-billed Grebe. The angle of the morning light caused the water and the air to merge in an indecipherable mist. The grebe, and its reflection, appeared to be floating as if totally freed from gravity. It was an unexpected moment of beauty.
Appreciating nature is most satisfying when we stop. Stopping physically helps to put our fellow lifeforms at ease, which allows us to observe their natural behaviors. Stopping mentally helps even more. Disconnecting from our wired existence, letting go of our worries, taking a deep breath, and observing the diversity and beauty of life...provides a deep sense of peace.
Watching nature is my form of meditation. By focusing externally, my internal dialogue dries up and disappears. I am left with a sense of calm born out of the observation, acceptance, and appreciation of our fellow lifeforms.
Nearby, an American Crow shattered my moment with its insistent message. A perched predator lurked overhead. 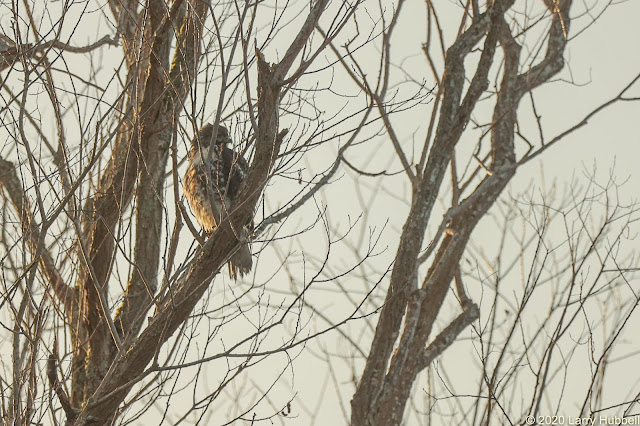 The Red-tailed Hawk was backlit by sunshine and crouching below the diving crow. I thought I saw glimpses of white on the Hawk's back which made me wonder if it might be a first-year bird. I decided to try for a better view. By the time I circled around the hawk was gone.
Red-tailed Hawks are probably our most commonly seen and most varied Hawk species. Birds of the World lists 12 subspecies in North America. However, most of the subspecies are not migratory. I believe the subspecies we most usually see is the Western Red-tailed Hawk. It is apparently unique from other subspecies because it generally has horizontal bars in its belly band instead of vertical streaks. 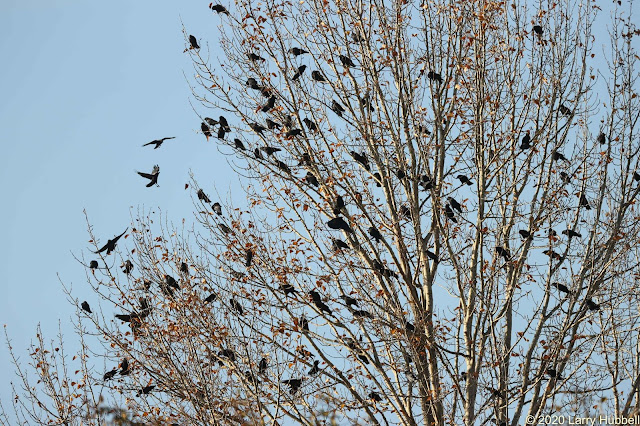 Soon corvid reinforcements appeared, which most likely further motivated the Red-tailed Hawk to keep its distance. I decided to make a circuit through the Union Bay Natural Area - hoping I might see the Swans from a distance. 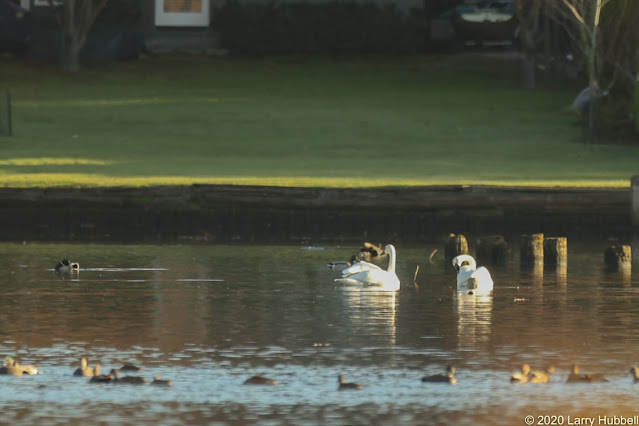 I was glad to finally find them, looking undisturbed in the area to the south of Yesler Swamp. 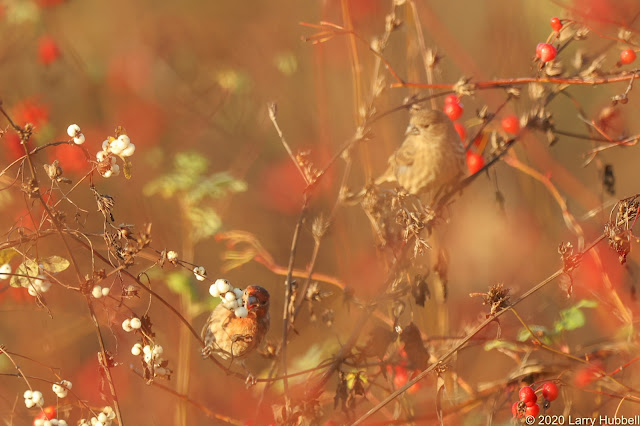 Behind me, House Finches plucked at the snowberries intertwined among the rose hips. This was the first time I ever remember seeing a bird eat more than one snowberry. However, I have also seen House Finches eating dry, moldy blackberries in late Winter. Apparently, they do not have a discriminating palate.
After a brief visit to UBNA, I headed back towards Yesler Swamp. 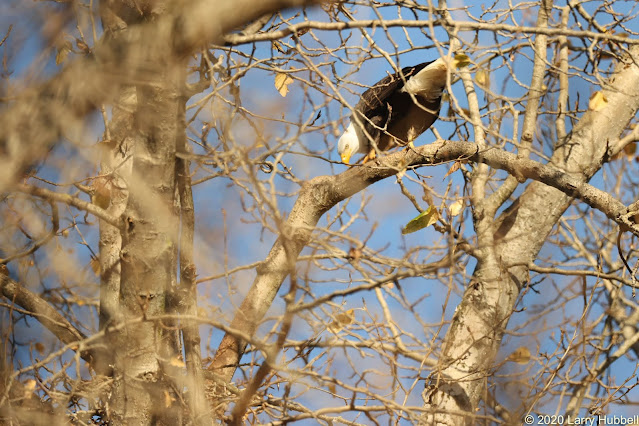 Across the street, I found one of the Bald Eagles hanging out above the remains of last year's nest. It looks like Talia and Russ, the resident pair of Bald Eagles, will have a busy Winter rebuilding their nest. 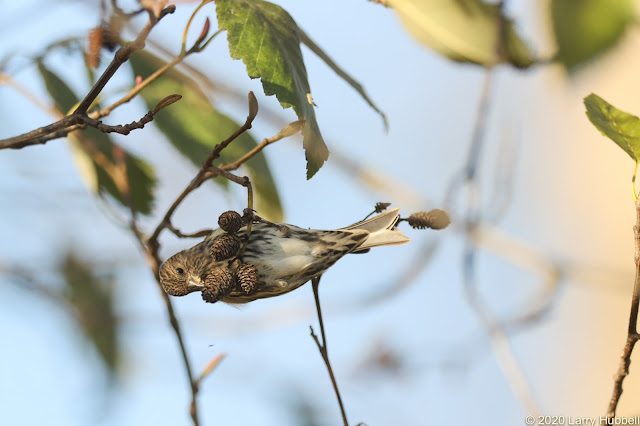 Nearby, I heard the descending call of the Red-tailed Hawk. It was soft, within earshot, but not obvious. Twisting, turning, and searching the trees did not help. I could not find the Hawk even though the call was repeated. You can hear a similar call on All About Birds by Clicking Here and picking either the first or second recording.
Back at Yesler, I did find Pine Siskins actively feeding in the Red Alder. It is hard to imagine how they can survive while eating such tiny nuggets of nutrition.
Finally, I gave up on the Hawk and headed back to the car. 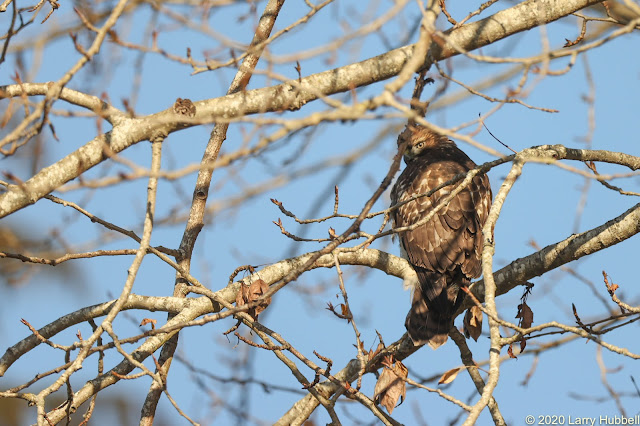 Just before reaching the car, I glanced across the street. Sitting low in a leafless cottonwood was the dark shape of the Red-tailed Hawk. It was studiously watching as smaller birds flew back and forth in the undergrowth. 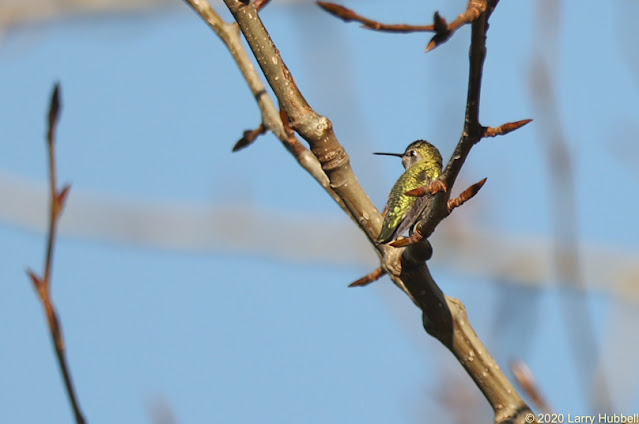 An Anna's Hummingbird perched nearby. Later, it would rise up and hover in the face of the hawk, trusting its speed for protection. 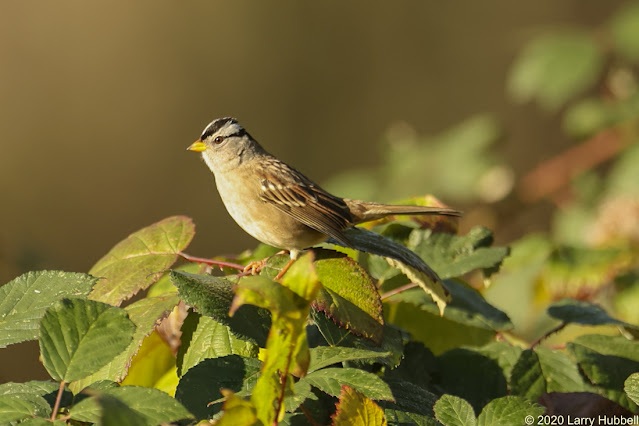 Below, White-crowned Sparrows moved back and forth in the lower vegetation making me wonder if a neighbor had a feeder nearby. 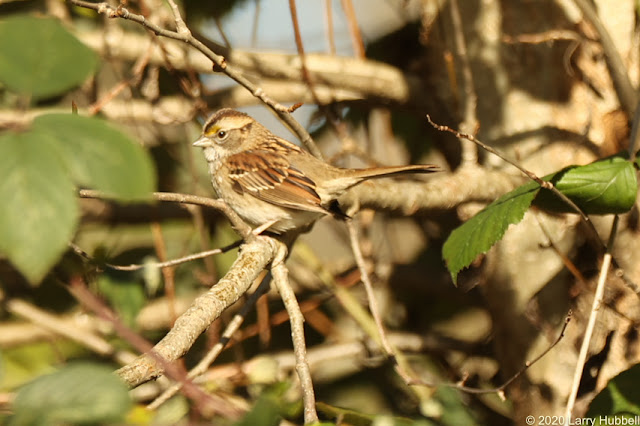 The brown-and-beige coloring on the head of this sparrow made me think it was an immature White-crowned Sparrow. But if that were true it would have a pinkish-orange bill. I does not. Thank you to Doug Santoni who suggested it is a White-throated Sparrow. (A young White-crowned would also have more gray on its chest.) 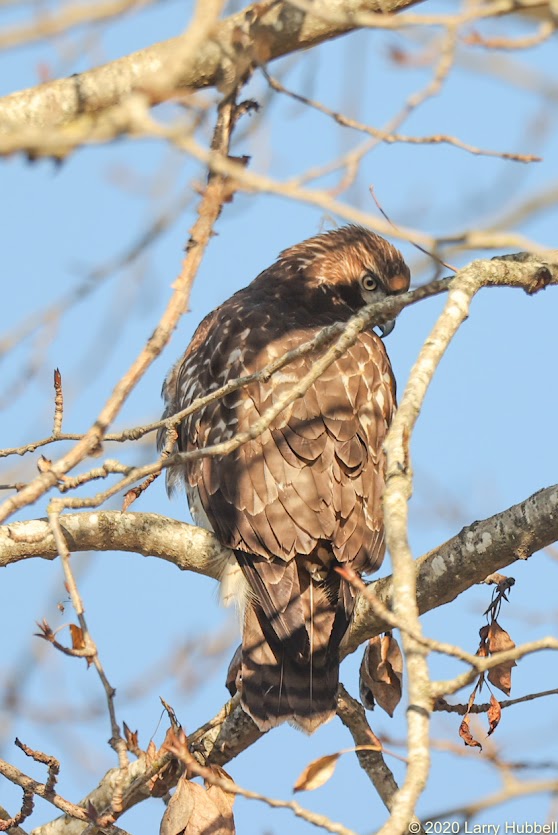 For the most part, the hawk sat still. Only its head twisting and turning while tracking the smaller birds passing below. 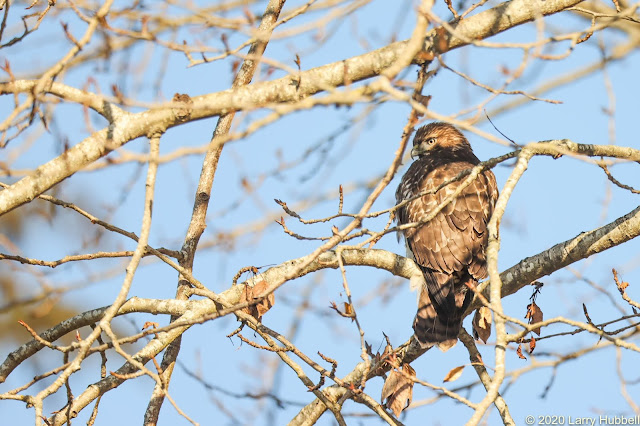 I had no doubt it was hoping to catch a careless bird unaware of its presence and proximity. 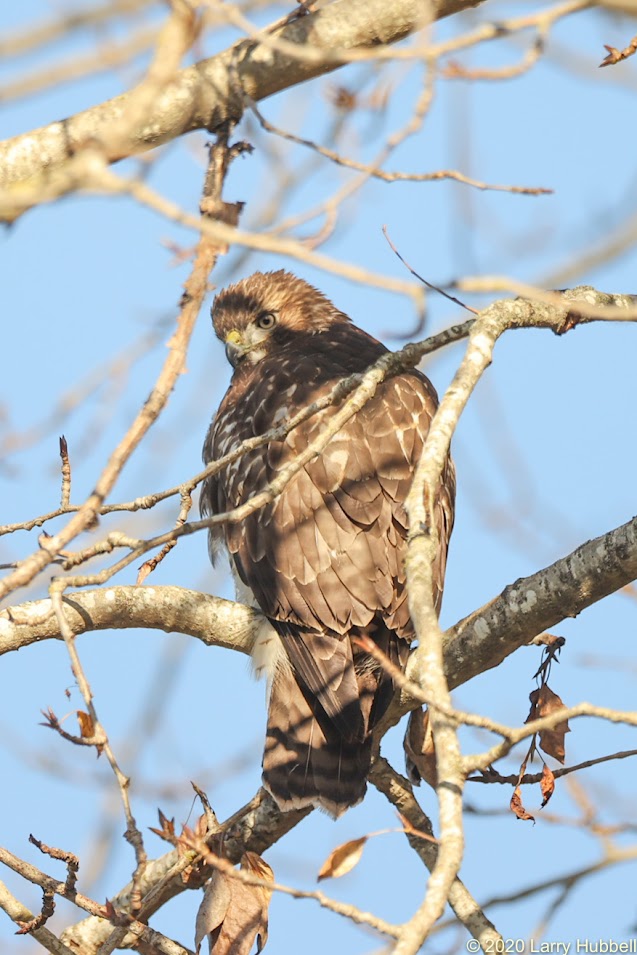 Occasionally, it seemed to become more intent. But apparently, none of the prey species exhibited adequate carelessness.
When perched, juvenile Red-tailed Hawks have tails that are noticeably longer than their wingtips, as in this photo, and not particularly red. 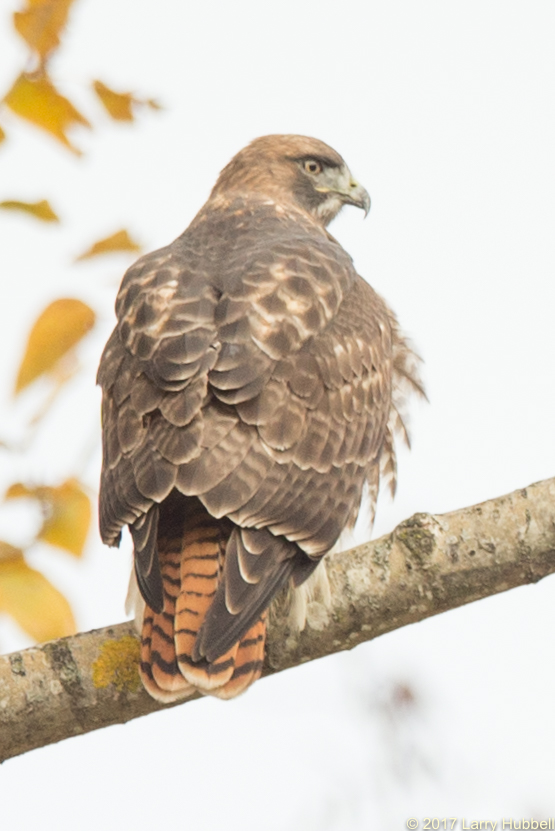 Adults have reddish tails and when the wings are totally folded, e.g. the right-wing, the tips extend much further down the tail. 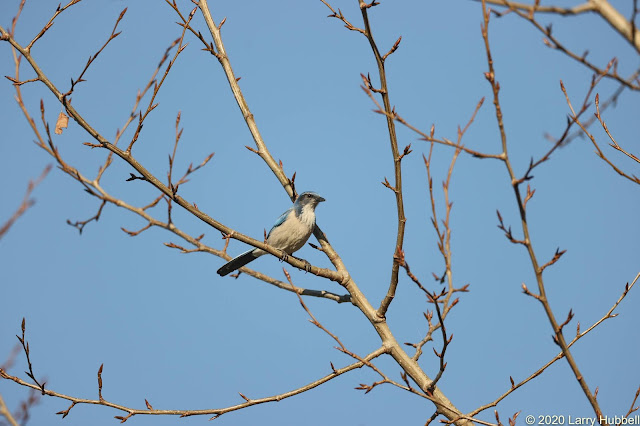 The most exciting moment for me was when the California Scrub-Jay appeared. They are most usually found further to the south. There are occasional sightings in Seattle, however, this was my first time, to see one in the Union Bay vicinity. 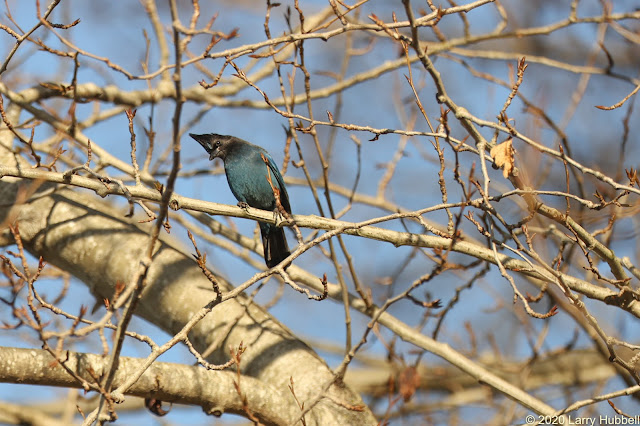 Our common, Union Bay Jay is the Steller's Jay. This thoughtful Steller's Jay also visited the area. It appeared to watch carefully for any sign of aggression from the Hawk. 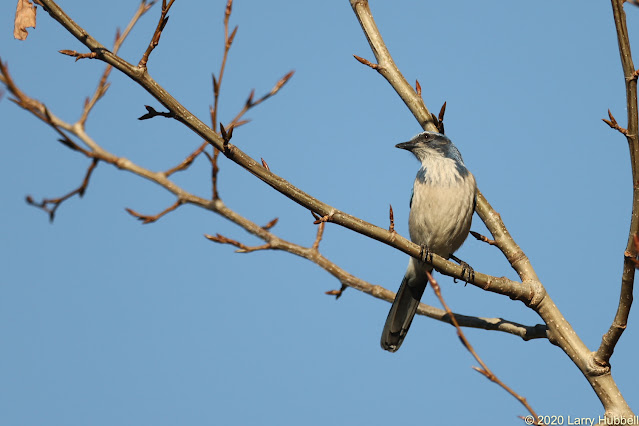 Neither species of Jays perched for very long. They both moved up and away in the bare tree. It was interesting to compare which was easier to follow. With the bright sunlight illuminating the tree, the light belly and chest on the Scrub-Jay helped it to blend in and disappear. In contrast, the dark coloring of the Steller's Jay made it easier to track.
I wondered if the darkness of the Steller's Jay was adapted to live in and around the thick shady branches of our original, primarily coniferous, Northwest forests. The California Scrub-Jay is more plentiful in the sunny Southwest, where hiding in brightly lit conditions is a significant advantage.
This line of thought made me suspect that lighter and brighter colored birds are generally found in sunnier conditions. Certainly, when the darker months come to the Northwest most (but not all) of our bright yellow warblers head south, as do the light-colored Osprey.
At first, it seemed like the big exception was all the white birds, e.g. Trumpeter Swans, Snow Geese, Snowy Owls, etc, which often live in snowy conditions. However, maybe this exception actually proves the point. Since snowy conditions are also bright maybe the rule is, The brighter the conditions the lighter the average bird's plumage.
Curiously, while reading about the Red-tailed Hawks I stumbled across a comment about Gloger's Rule. In Wikipedia I found the following attributed to Zink and Remsen (1986), "Gloger found that birds in more humid habitats tended to be darker than their relatives from regions with higher aridity. Over 90% of 52 North American bird species studies conform to this rule." 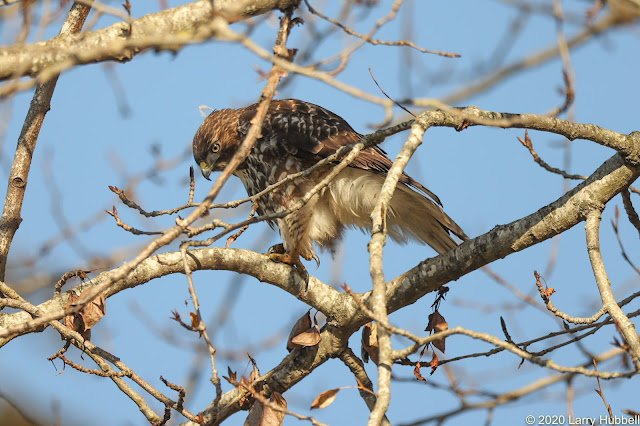 The young hawk finally started to turn around. 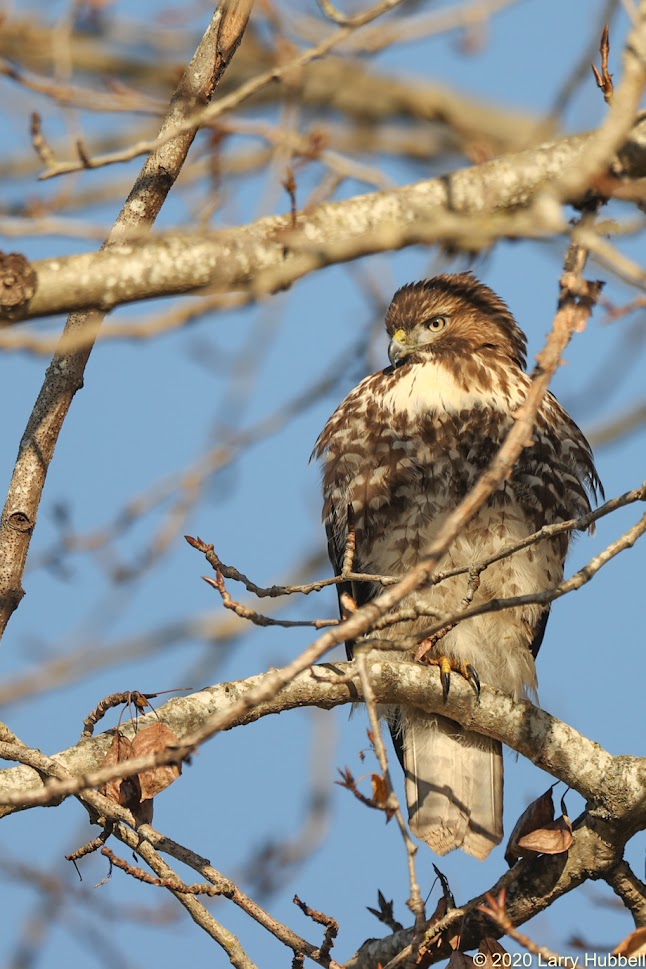 It was interesting to observe the dark barring on the belly band and the light underside of the tail feathers. 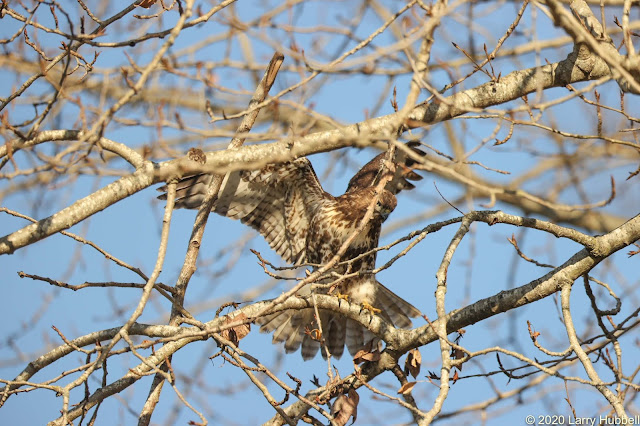 When a neighbor appeared in a nearby yard the Red-tailed Hawk moved away to a more distant location. Sometimes persistence pays off and sometimes I just get lucky!
*******************
Last week, Tyler Mangum wrote in regarding my previous post about the Bald Eagles, Monty and Marsha, and how they appear to be extending their territory to the north. He said that last summer shortly after their offspring, Tsuloss, learned to fly the young bird landed in this same area. Tyler saw the juvenile bird sitting in the cottonwood which was previously in the neighboring Bald Eagle territory, to the north e.g. Russ and Talia's territory. He suggests that this may have been the original inspiration for Monty and Martha to begin expanding their territory. It certainly seems likely to me.
Thank you, Tyler!
*******************
In other news, I was lucky enough to be interviewed by Ed Pullen last week. He just published the interview on his Bird Banter podcast. If you would like to hear it please Click Here.
Have a great day on Union Bay...where nature lives in the city and Black Birders are welcome!
Larry
Going Native:
Without a well-funded Environmental Protection Agency, it falls to each of us to be ever more vigilant in protecting our local environments. Native plants and trees encourage the largest diversity of lifeforms because of their long intertwined history with our local environment and native creatures. I have been told that even the microbes in the soil are native to each local landscape. I hope we can inspire ourselves, our neighbors, and local businesses to respect native flora and to support native wildlife at every opportunity. I have learned that our most logical approach to native trees and plants (in order of priority) should be to:
1) Learn and leave established native flora undisturbed.
2) Remove invasive species and then wait to see if native plants begin to grow without assistance. (If natives plants start on their own, then these plants or trees are likely the most appropriate flora for the habitat.)
3) Scatter seeds from nearby native plants in a similar habitat.
4) If you feel you must add a new plant then select a native plant while considering how the plant fits with the specific habitat and understanding the plant's logical place in the normal succession of native plants.
My intention in my weekly post is to include at least one photo each week and visually challenge us to know the difference between native and non-native lifeforms. 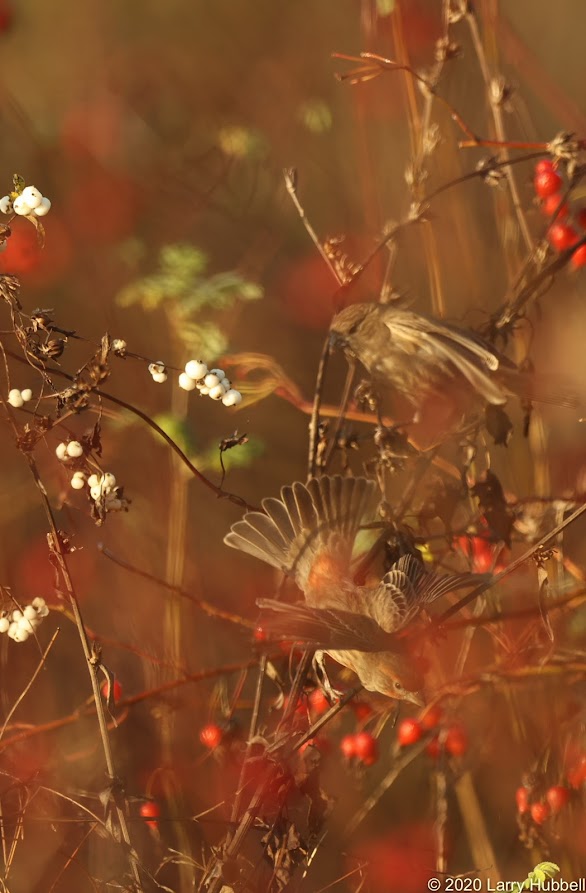 Are Snowberries native to Union Bay?

Scroll down for the answer.
***************
Common Snowberry: Yes!
***************
The Email Challenge:
Over the years I have had many readers tell me that Google is no longer sending them email announcements regarding my posts. Even more frustrating when they go to 're-sign-up', hoping that will enable them to once again start receiving the announcements, they get a message which says 'Sorry, you are already signed up.' Google has not responded to my requests for help with this issue.
My functional workaround is to set up my own email list and each week I manually send out a new post announcement. If you are experiencing the issue and would like to be added to my personal email list please send me an email requesting to be added. Thank you for your patience!
My email address is: LDHubbell@Comcast.Net
Two more final photos: 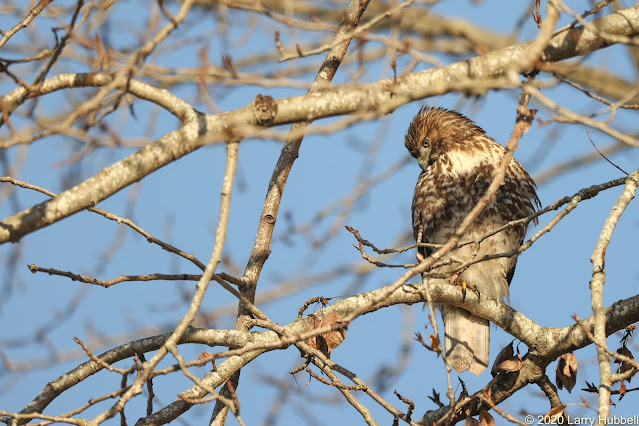 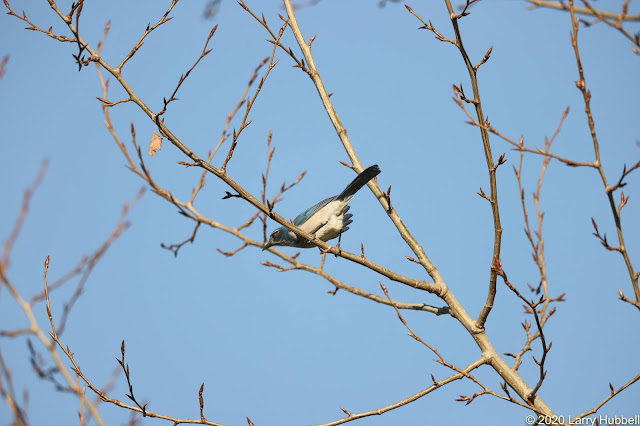