For most of the last month there have been roughly 14 large white swans on Union Bay. They seem to have left earlier this week, just about the time the snow arrived. I wonder if they headed  further south to find warmer weather, it seems like a good plan to me. 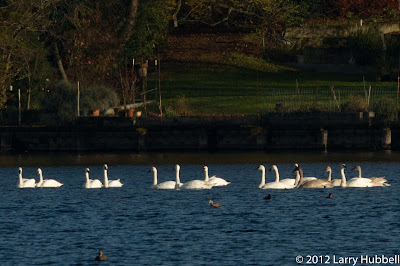 Twelve of these swans appear to be Trumpeter Swans while I believe the other two are the slightly smaller and more elegant Tundra Swans. Three of the 12 Trumpeters are juveniles. They are more of a gray color instead of white. They can be seen on the right side of the photo above. The following two photos are close ups of an adult Tundra & Trumpeter swan. Can you tell which one is which? 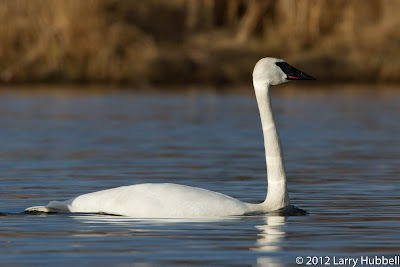 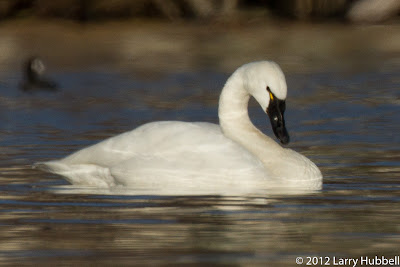 I have learned that the easy way to tell them apart is the small yellow mark just in front of the eye. I believe the correct name for this spot is a lore and only the Tundra Swan has this mark. The Tundra swan is also smaller then the Trumpeter Swan, but this can be difficult to see unless you happen to catch them side by side. 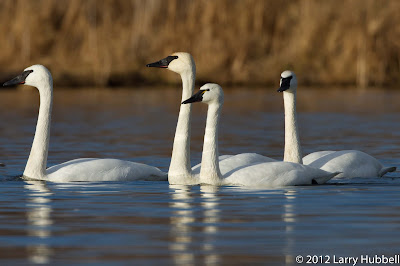 The middle two birds in the photo above happen to provide just such a comparison as do the two birds below. 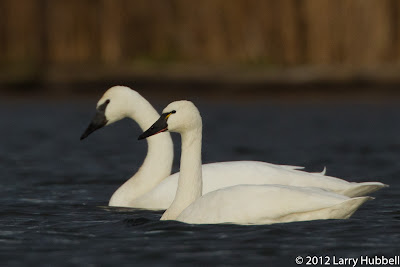 Most days I could spot the swans from Foster Island by looking north. They are usually just small white dots floating on the water but it was very nice to know they were there. Beautiful wild birds living in the middle of a half a million people. They seemed to find plenty to eat because they spent a large portion of their time sleeping. 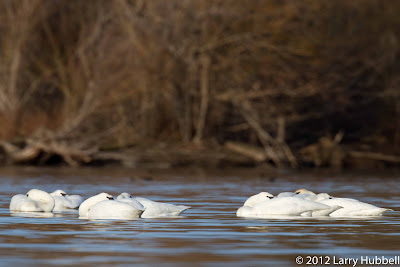 I seldom saw the swans take to the air. It seemed they only flew to escape humans when we approached too close. Unlike most of the other birds on Union Bay, I never noticed the swans flying away from the Bald Eagles. The swans were pretty obvious about their discomfort if someone came too close. Initially they would just turn and swim away. My thought was, "If all you can see is their backside then you are too close." In any case, I do think the swans were most beautiful in flight. 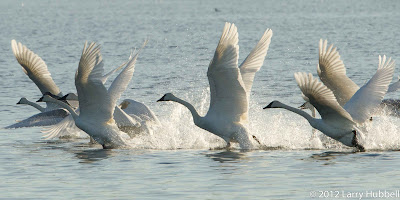