Big Babies – How to tell?

Most of the young birds around Union Bay have now left their nests. At this point in the summer many of the young birds may be nearly as large than their parents. In addition many are now flying and at first glance it can be a bit hard to figure out which bird is the parent. The biggest baby that is still at the nest is most likely Eva’s "little" Eaglet. (previous post) 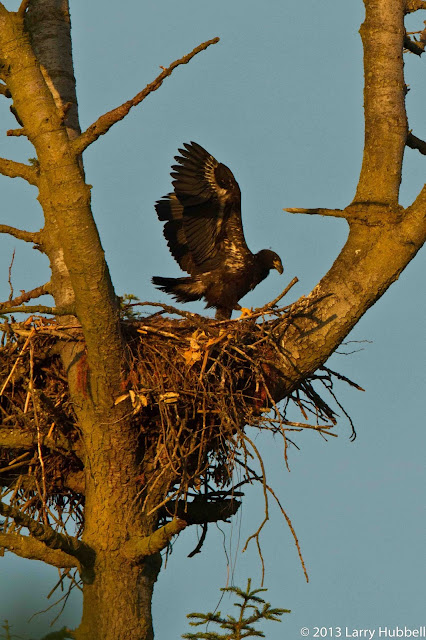 Actually it may branch out at any moment.  (Please leave a comment below if you see it do so.) In any case this eaglet certainly qualifies as a big baby. Here is a photo from last week, which shows that the young bird is virtually the same size as Albert, its father. 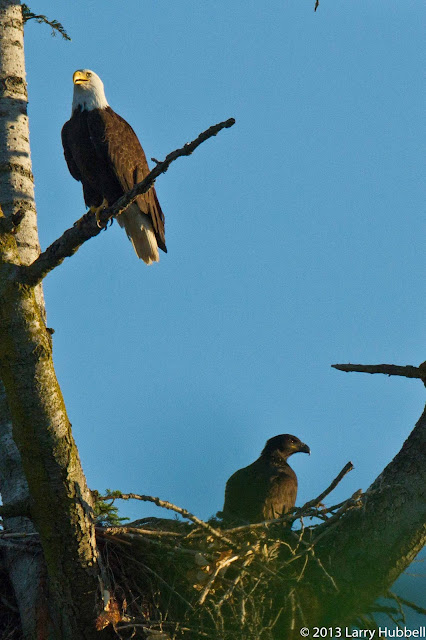 The Cornell Lab of Ornithology implies that the average length of time before eaglets leave the nest is about two and half months. Most likely this young bird is getting close to the mark. The next few weeks will be the most exciting time to be watching the nest.  The eaglet will be practicing its final preparations for learning to fly e.g. fledging. It will be flexing its wings to build strength and practicing its hopping & landing as it moves from branch to branch around the nest.

Although this practicing looks fun and playful it is actually very serious. From the eaglet’s point of view it is preparing for the most dangerous flight of its life. If it fails to fly in its first attempt it is unlikely that there will be a second chance. 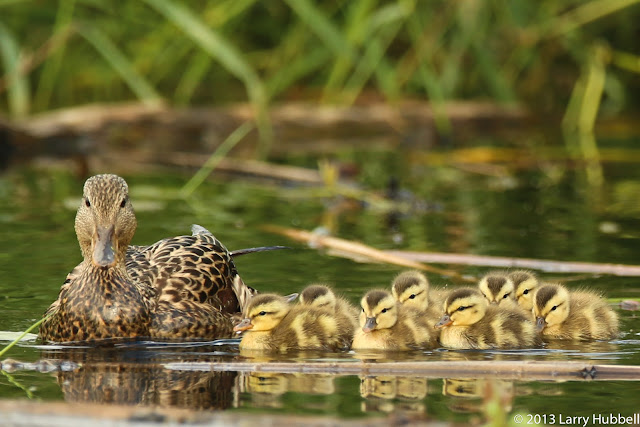 These young mallard chicks are a big baby exception. They are clearly little babies who have left the nest.

For them failing to fly is also dangerous, not because of the potential fall, but because being unable to fly can leave them in harms way. 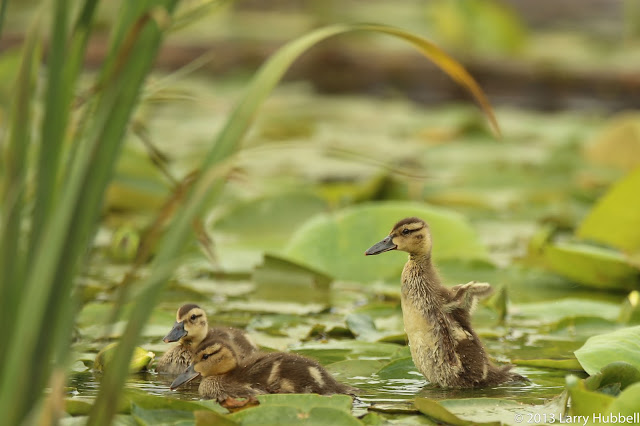 On the other hand this crow is nearly the same size as its parents. 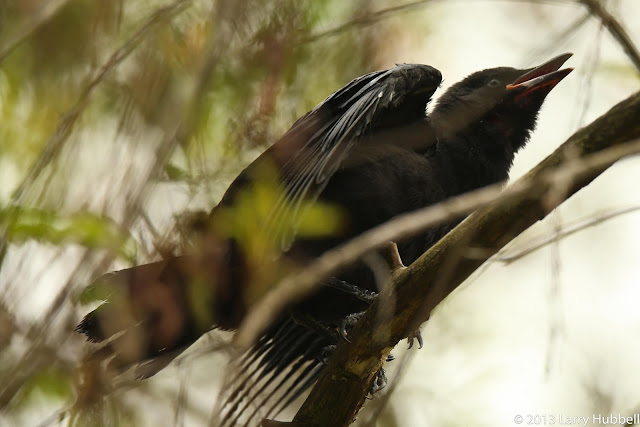 At first glance it just looks like another one of the hundreds of crows that harass the eagles, osprey and hawks around Union Bay. But on closer examination a few details stand out that allow us to know this is one of the big babies. 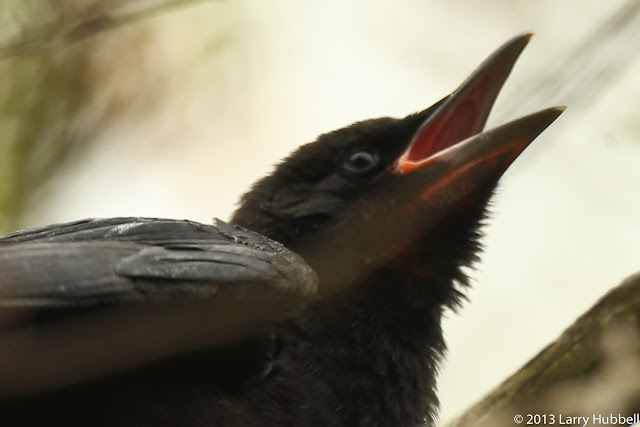 Its fresh, fluffy feathers without any signs of wear indicate that this is a big baby. Also if you were the one taking this photo you would have noticed its constant cries for food. At this time of year the parent’s feathers are looking worn and the parents are quite often appear tired and haggard. However this year’s young birds have been sitting in the nest having their meals delivered and in many cases actually inserted into their mouths. Their largest expenditure of energy, other than growing, has been "crowing" for more food, so they look nearly perfect. No signs of hard work or wear and tear.

Another interesting distinction between this bird and the parents is the pink color at the corners of the mouth. It looks like this coloring is just a stage the bird passes through. Like the Model T, an adult the crow comes in any color you like, as long as it is black. 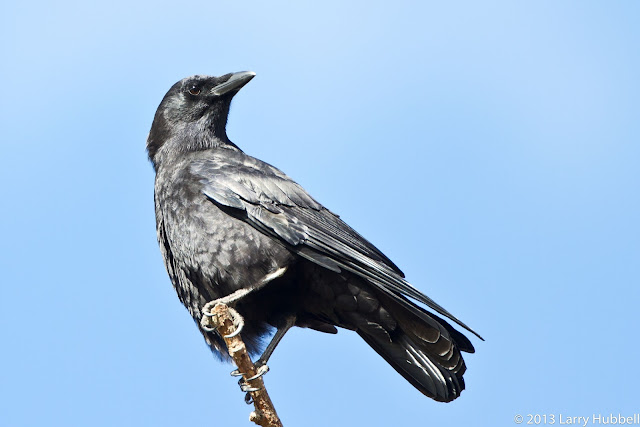 The immediately preceding post showed another example of a big baby asking for food. 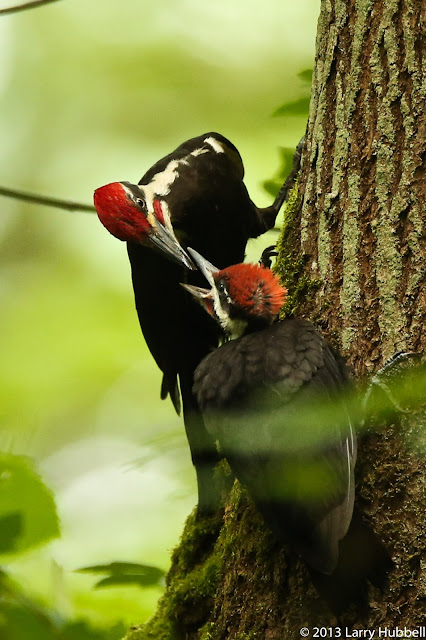 What is interesting about the pileated baby is, although it is a big baby, unlike the downy woodpecker we saw a few weeks back, it is not as large as the parent when it leaves the nest. In this case the parent is not only putting food in its mouth but it appears it may have even partially digest the food as well.

Another big baby in the Union Bay area is this Barred Owlet. (Now that it is flying it would actually be more precise to call it a fledgling Barred Owl.) 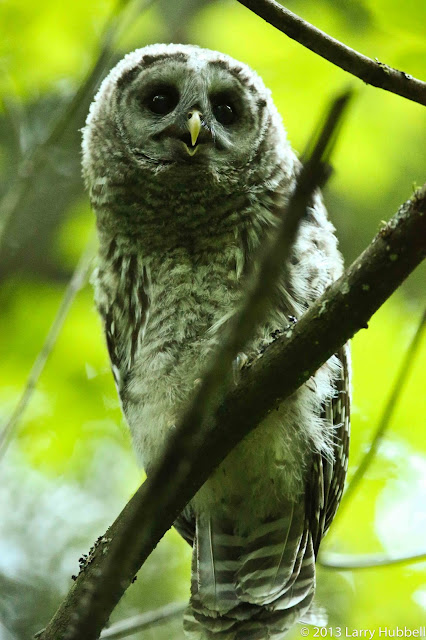 At the time of this photo, less than 2 weeks ago, this bird had left the nest, was may be 70% the size of the parents and was still being fed by the parents. Hunting and catching creatures that move would seem to be a very challenging skill to learn.  It makes sense that an owlet would be dependent on its parents for a while.

This file photo was taken on Union Bay in July a couple of years ago. 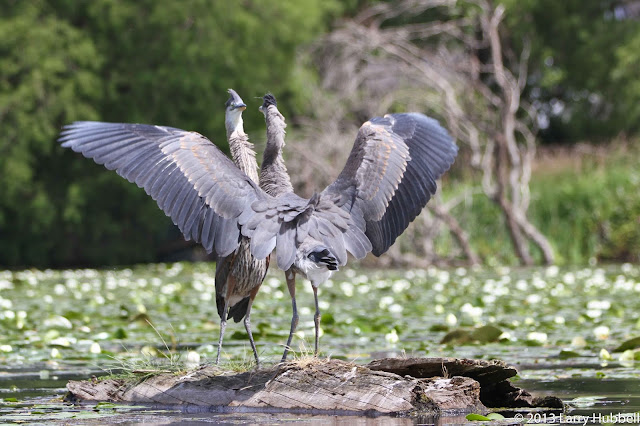 These two Great Blue Herons appear to be a couple of big baby hunters as well. This year’s baby blue herons may be one of the few babies that are still in their nests. If you happen to walk through the grove of trees just east of the Chemistry building on the UW Campus check the leaves near the tops of the trees for some big baby herons perched on their nests. Be sure to watch your step and listen for the cries as the big babies ask for more food.