The Challenges of Youth 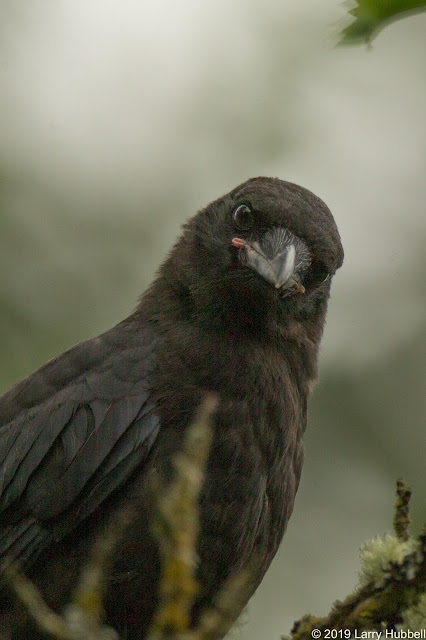 As we step into summer we can see and hear young birds all around us. The calls of juvenile crows lack the crisp, occasional 'Caw' of the adults. Their young voices are considerably more gentle and soft. However, there is no mistaking their repetitive and persistent 'cAhh, cAhh, cAhh' for anything other than begging. 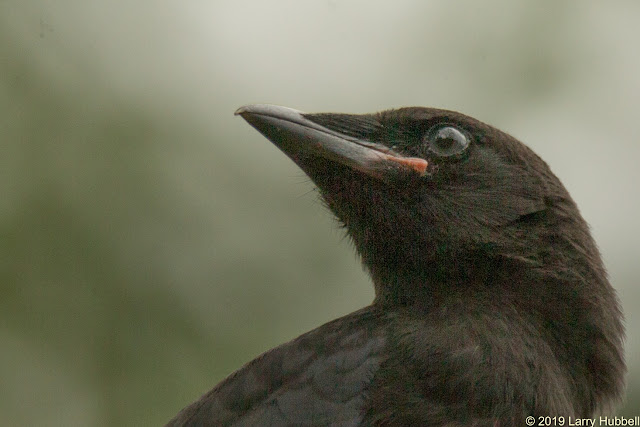 Even if young crows never made a sound their pink gape, at the corners of their mouths, and their abnormally pale and reflective irises would give themselves away. 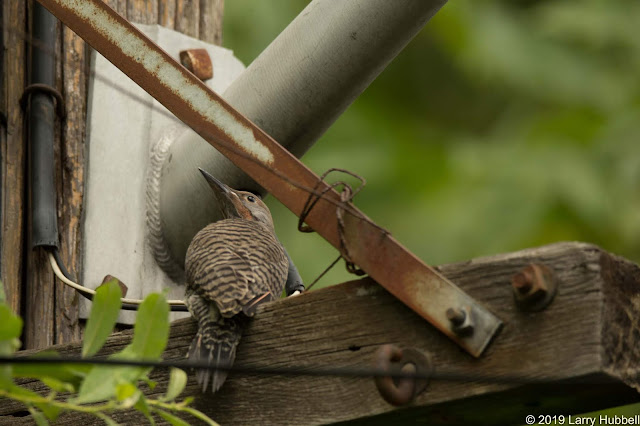 Young Northern Flickers provide both visual and auditory clues as well. This one was repetitively begging with a soft and gentle version of an adult's 'Clear, Clear, Clear' call. 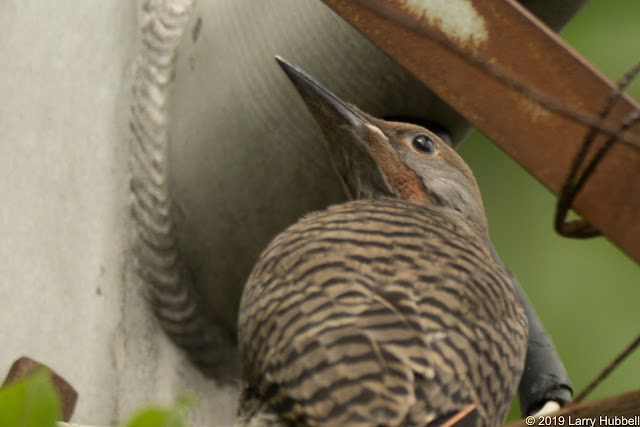 Visually, the clues to this bird's youth include the short, white line of its gape and the faint, almost rusty red, color of its malar stripe. Adult male Northern Flickers, in the local Red-shafted subspecies, have a much more strikingly, vibrant red color on their cheeks, which we will see in following photos. 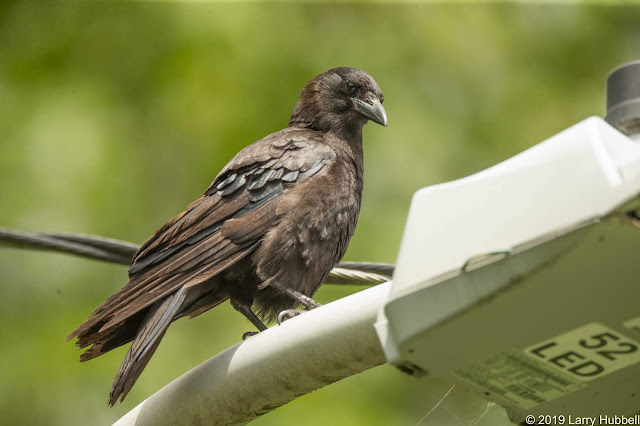 The persistent begging of the young woodpecker attracted this adult American Crow who settled onto the light directly above the young flicker's head.

It is interesting to note the varying lengths of the crow's outer coverts. The bird is obviously molting. The shorter and darker feathers are the new ones. The older and browner feathers show the fading effects of extensive sunlight exposure. 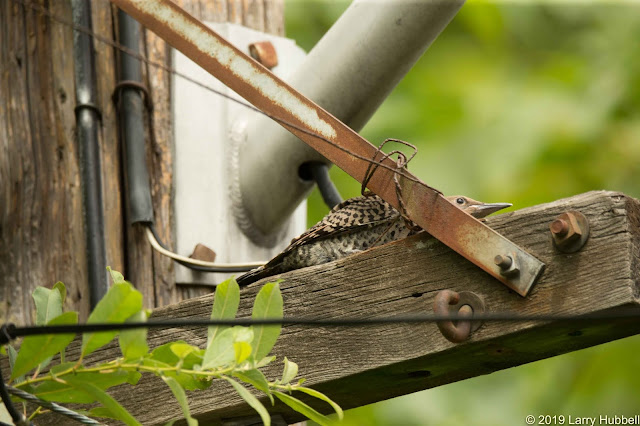 Immediately, the young Northern Flicker scrunched itself down, as if it was trying to become one with the wood. Under the circumstances, the effectiveness of the deception was probably minimal. 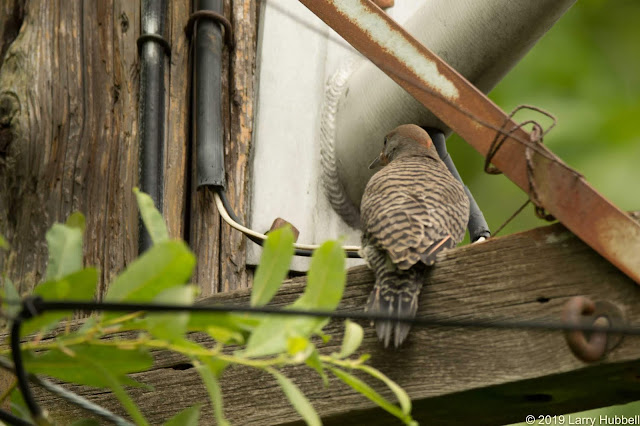 By the way, a variation on the first photo shows the flicker also has a hint of a faint reddish 'v' on the back of its head. This red coloring will also turn bright with time. Surprisingly, this feature is inherited from the locally less common, yellow-shafted subspecies of the Northern Flicker.

Maybe, the crow decided the young woodpecker was too large and healthy to make an easy meal or maybe it was encouraged to leave by the pair of Bald Eagles who suddenly began circling and calling overhead. 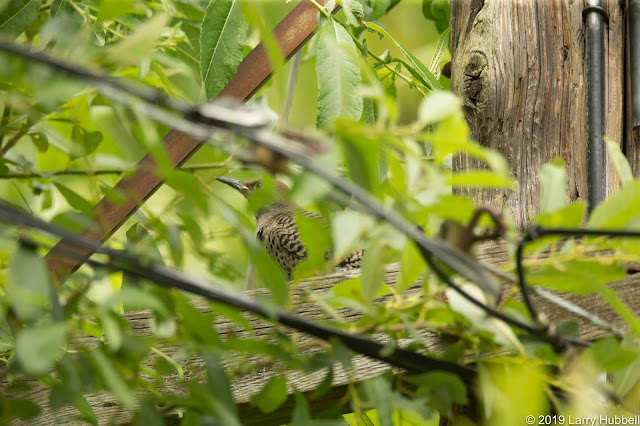 Quickly, the young flicker scurried to the far end of the crossbar. No doubt he was hoping, the surrounding foliage would provide some visual protection from the sharp-eyed eagles. The flicker's apparent attachment to the crossbar made me wonder about its ability to fly. Was it stuck on the telephone pole, while alternating between begging for food and advertising itself as an easy meal? 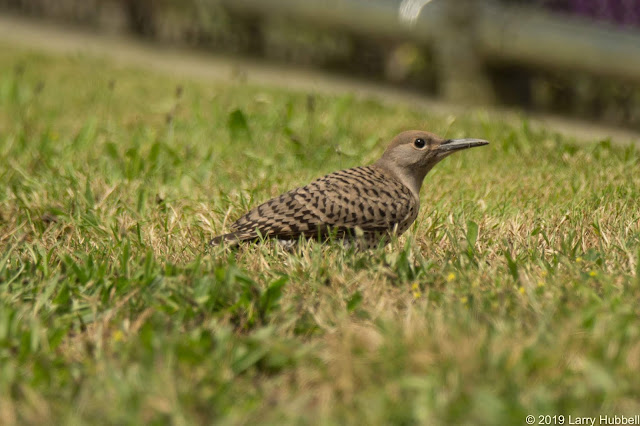 A few days later, I came across another young flicker that clearly knew how to fly. When I first noticed the bird it was perched in a tree with what were apparently two other members of its family. It followed its father's lead and flew down to the grass in front of me.

This young bird does not have any reddish tinges on its head so we can be assured it is a female. It has already lost its light-colored gape, so you may wonder, How can we be certain of its youth? 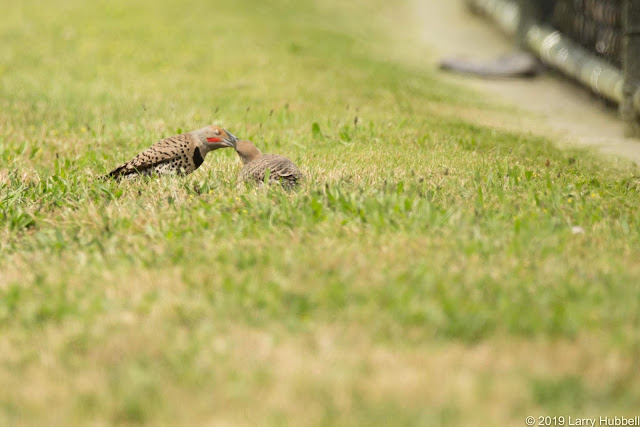 I was convinced by the adult male, when it choose to feed the young bird. 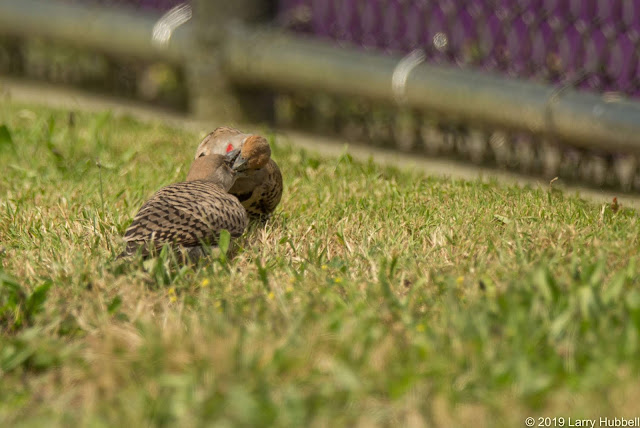 The process was repeated multiple times. The adult was apparently collecting small ants and then regurgitating them deep into the inner recesses of its offspring. It is scary how close the sharp tip of the young bird's bill comes to the eye of the adult. 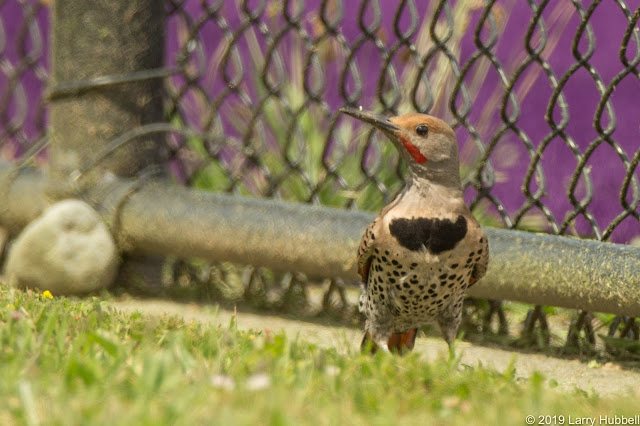 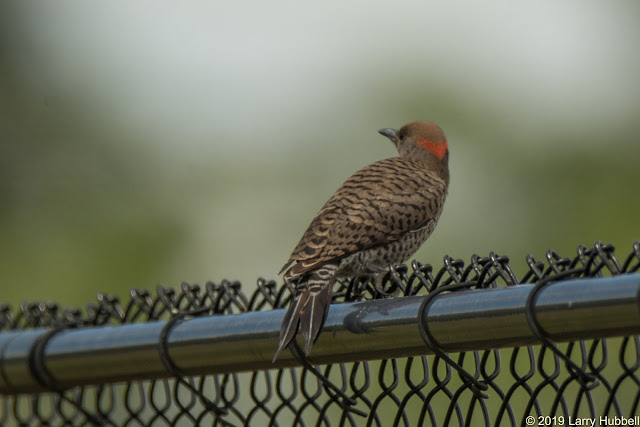 After a few minutes, the third flicker also flew down from the tree. The 'v' on this bird's head was significantly more obvious. The genes from the yellow-shafted subspecies are apparently surprisingly well-spread among our local Northern Flickers. 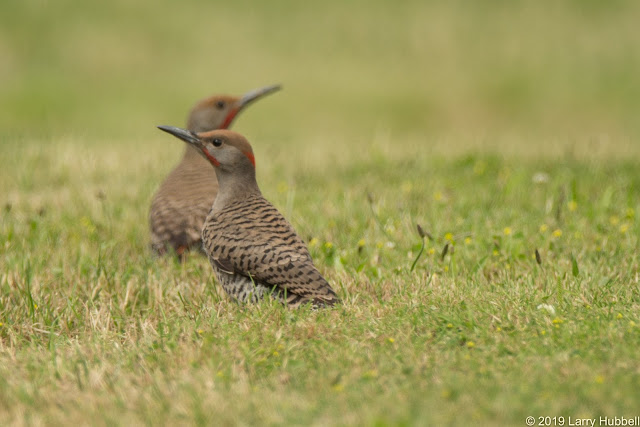 From the fence top, the young male flew down to join the adult. The red on this bird is nearly a bright as the malar stripe on the adult behind it. None the less, I am assuming it was a juvenile bird because of the way it followed after the adult.

Curiously, the adult male did not exhibit a 'v' on the back of his head. However, the young male, which I am assuming to be his offspring, does have the 'v'. If my assumptions are correct then I am left to wonder, How did this genetic code get passed along? Could the adult male pass on a recessive gene that is expressed in its offspring? Could the mother pass on a male gene that is not displayed in females? or If neither of these are possible, Does the situation imply that the genetic father might have been different than the male who apparently fed and helped raise this younger male? 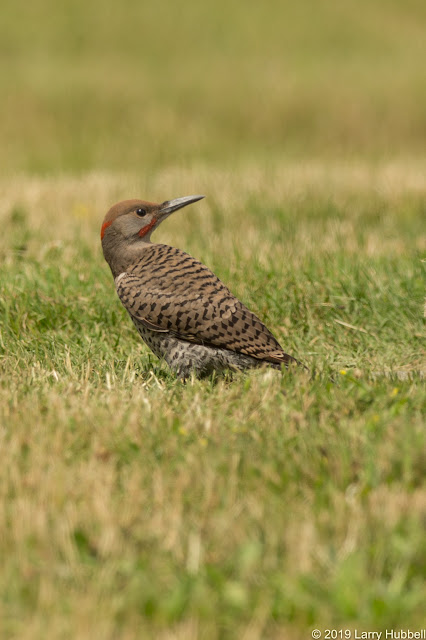 Ultimately, the young male watched the adult go on about its way without sharing. The adult seemed to be saying, 'Its time for you to find your own'. The adult's behavior seemed to reinforce the belief that this was a young male nearing maturity. 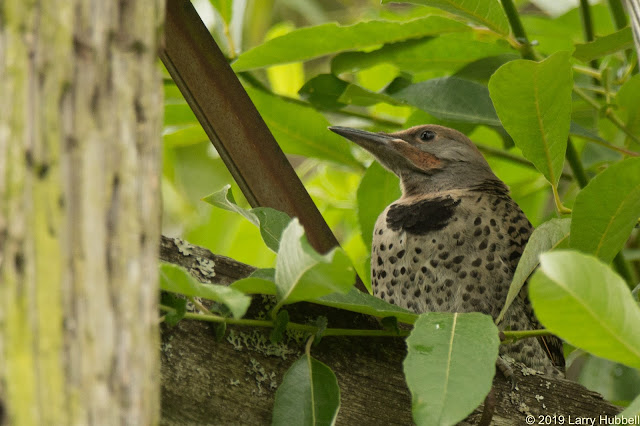 After the Eagles moved on, I returned to check on the young Northern Flicker hiding on the crossbar. He was sitting pretty, and quiet, still fairly well hidden back in the foliage. Survival is a curiously difficult challenge for the young. They want to call out to their parents, to encourage being fed, but they don't want to attract too much predatory attention. They don't want to expose their lack of flight skills but at the same time, they need to be practicing flying. Flying allows them to stay close to an adult which not only optimizes the efficiency of the parental gravy train but it also provides the youth with repetitive examples of an adult's predatory awareness plus they also learn how and where to find food.

Achieving maturity requires a delicate balance between a healthy appetite, learning new skills and adequate caution. The harsh truth is only those who successfully navigate the path between these competing demands will be able to pass on their genetic inheritance. Once again, I am amazed by the similarity of the challenges faced by all life on earth. 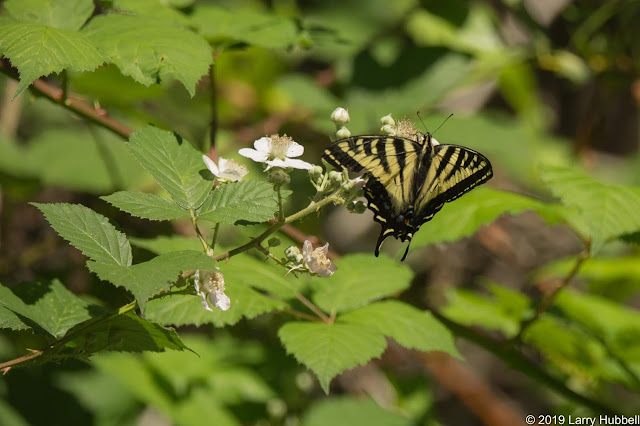 Are the butterfly and flower native or not?

Western Tiger Swallowtail: The butterfly is native. Surprisingly, the most common plant that I have seen this specie utilizing lately is the invasive Himalayan Blackberry, as shown in the photo. Click on the red highlighted link (and then scroll down) to learn how to identify this invasive blackberry as opposed to the native blackberries which we want to retain and encourage.