Yesterday, Marcus Roening and I went in search of the McKay's Bunting. Since there have been no known sightings on Union Bay this required some travel. The McKay's Bunting is extremely rare (a few thousand birds) and they usually reside on two, small Alaskan Islands. Luckily, one bird had been sighted on Damon Point south of Ocean Shores. Having the opportunity to see a McKay's Bunting in Washington state is a very special treat.


Marcus is a good friend who also happens to be a birder with over 35 years experience. 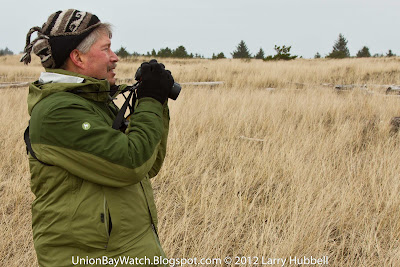 Along the way Marcus pointed out an Emperor Goose, a Greater White-Fronted Goose, a Harlequin Duck, a Peregrine Falcon, a half-a-dozen Snowy Owls and many, many other birds as well. Thank you, Marcus!
After a two to three hour drive and a brisk morning walk to the far end of Damon Point (beyond the Snowy Owls) we found  small group of Marcus's birder friends. They were quietly observing the small, white bunting as it bounced in and out of sight among the low sandy dunes which were somewhat sparsely covered with beach grass. 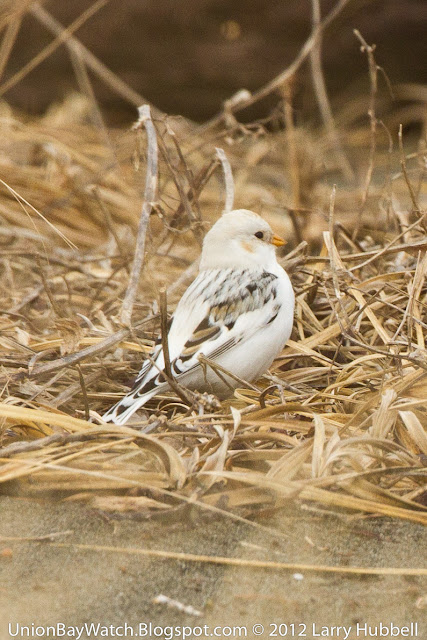 After watching the somewhat sleepy, Snowy Owls the McKay's Bunting seemed like an amazing bundle of energy. It seldom stopped moving. Usually it stayed on the ground although occasionally it would leap up to a grab a seed of grass. I do not remember seeing it fly.
Afterwords when I got home and began looking closely at the photos I was surprised to see a number of feeding behaviors that escaped me at the time. 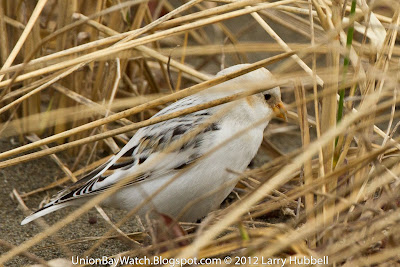 For instance in this photo if you look closely the bunting seems to have caught a small grass-colored inch worm. 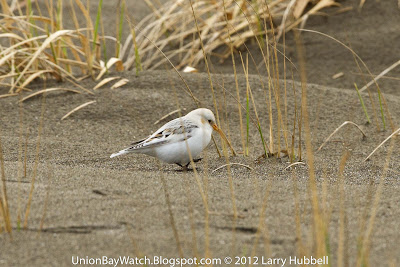 In this shot the bird appears to be pulling on the stalk of the grass. I suspect there must have been some form of food on the grass that attracted it. 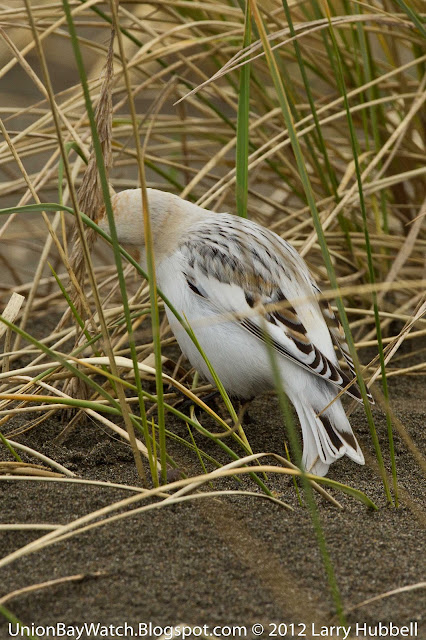 In this case the bunting is pulling a seed off the head of grass. 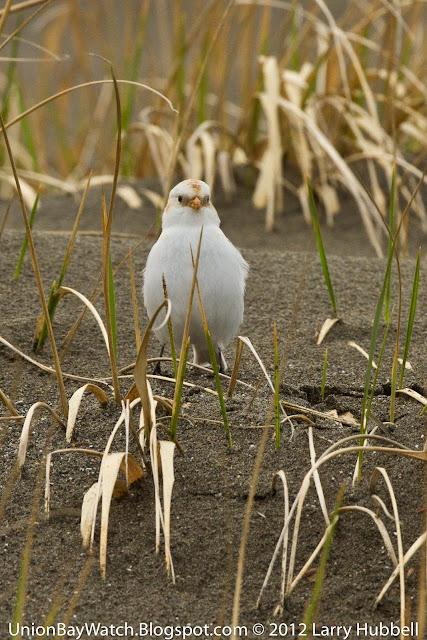 In this case I believe the bird is actually holding a seed in it's beak. 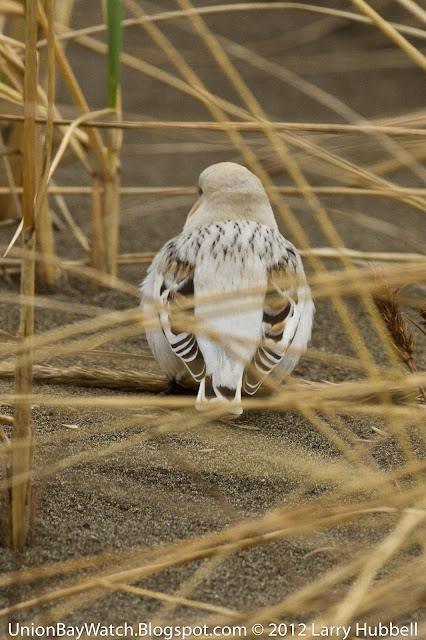 In this final example the bird is sitting on the head of grass to hold it down while it feeds. You can clearly see the leftover husks lay on the ground behind the bird. 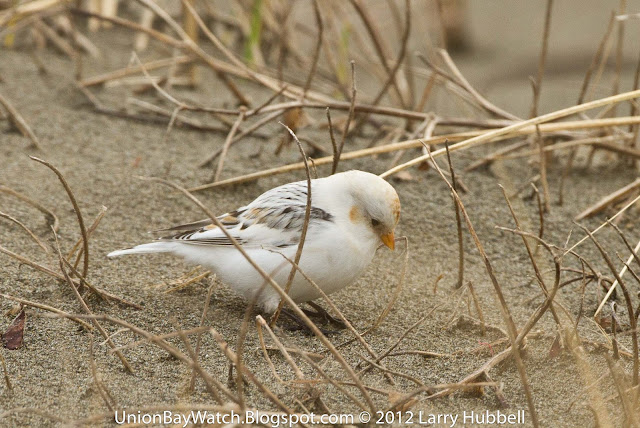 In this last shot the bird does not appear to be feeding, but I do wonder what it is thinking.
What  a beautiful little bird.
Until next time,
Larry
Ps: By the way when I get the chance I will be posting larger copies of these and a few other McKay's Bunting photos at:
http://unionbaywatch.smugmug.com
Posted by Larry Hubbell at 10:18 PM 3 comments:

The Tufted duck is most generally found in Europe and Asia. For some reason a few of them choose to winter in North America. I wonder if they are simply confused or if there is a risk-taking gene.

These photos are my thanks to Connie on Tweeters List who first spotted this duck from shore at the Union Bay Natural Area. Once at the UBNA the easiest way to get close to the Tufted is by searching for a half a dozen birders shielding there eyes from the sun and all looking intently off shore. 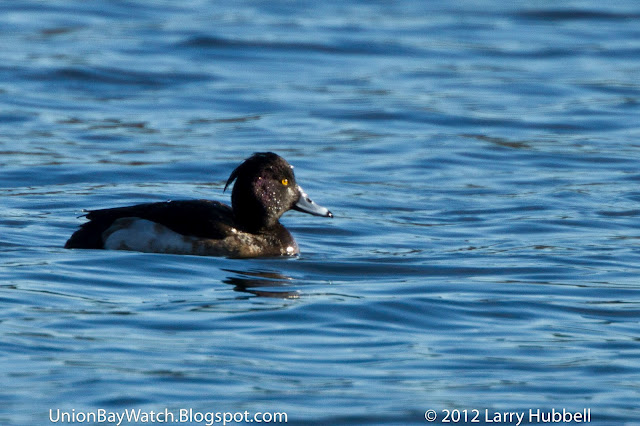 The key identifier for this bird are the feathers sticking out behind his head, somewhat like a Wood Duck. The most common activity for this duck appears to be diving to feed. This causes the tuft to become wet and lay closer to the head which can make him more difficult to spot in a crowd of birds. 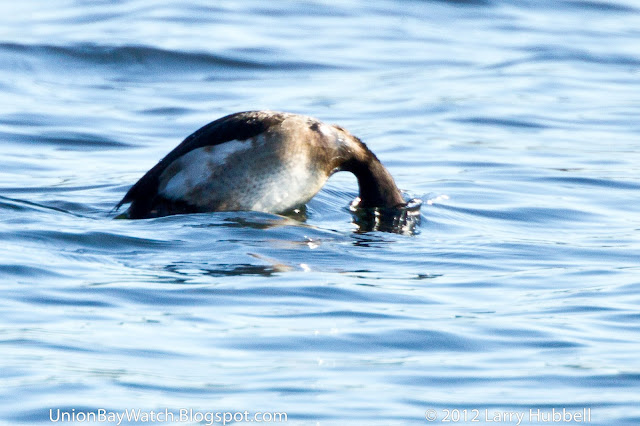 On the other hand he is smaller and different than some of his companions. 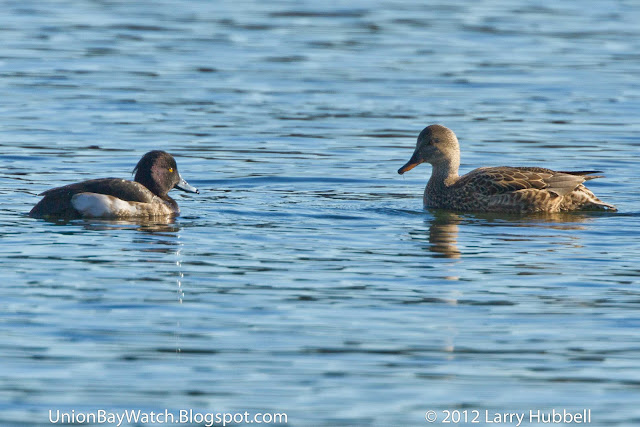 In addition to diving he did find time for a couple of other activities. 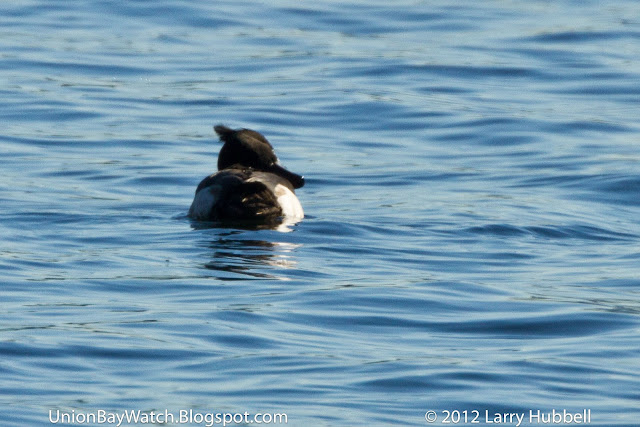 Rubbing that hard to get spot. 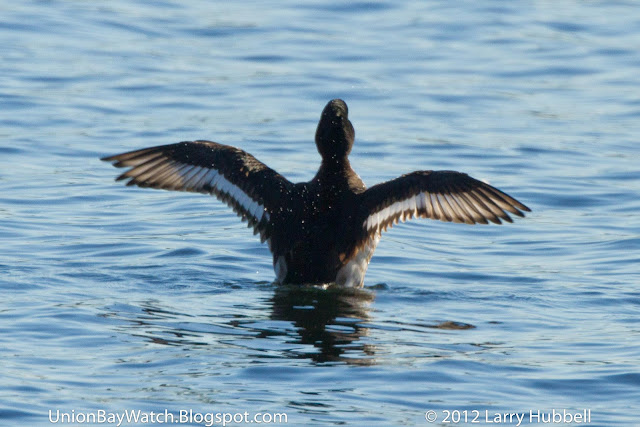 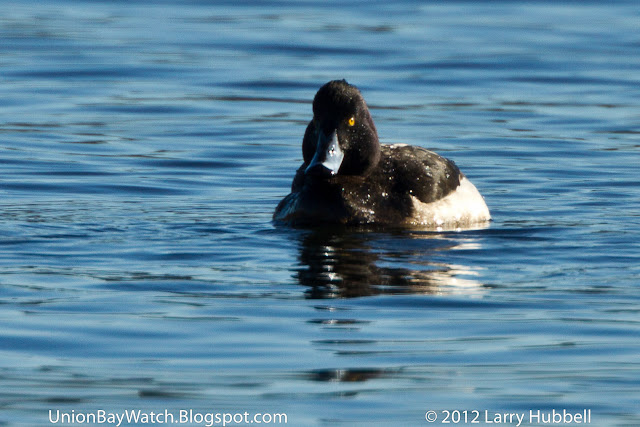 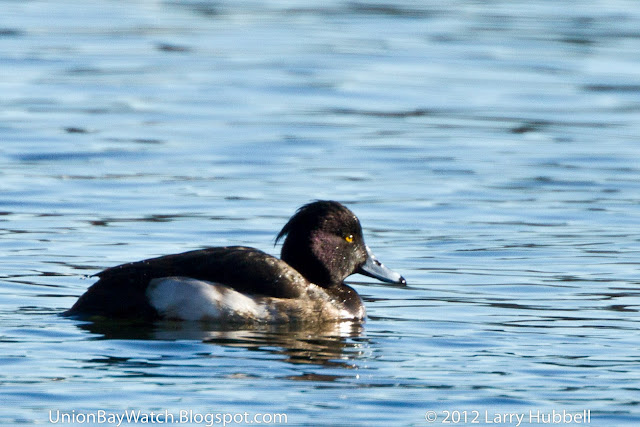 Here is one more parting shot.
It looks like another beautiful day today, so if you happen to find yourself at the Union Bay Natural Area, be sure to bring yours binoculars, scope or camera and search for the Tufted Duck.
Have a super day!
Larry
PS: After posting this blog I went out to Foster Island and spotted birders at UBNA who looked just as described above. So I could not resist posting this photo. <grin> 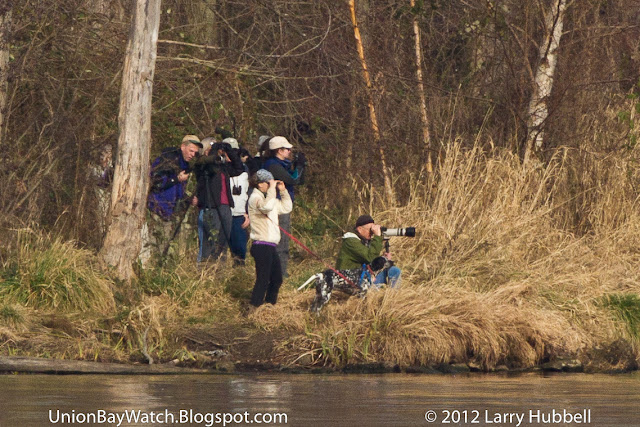 PSS: By the way I have larger versions of the bird photos available on Smugmug.
http://unionbaywatch.smugmug.com
Posted by Larry Hubbell at 9:12 AM No comments: