Bursting at the Seams

Right now Union Bay is bursting at the seams with life. There are so many stories happening it is difficult to select one, two or even three so here are four stories wrapped into one. The stories include updates on the Osprey, FOY Goslings plus new First of the Year Duckling photos (with thoughts about their one-eyed mother) and finally photos showing the operation of a Heron's eye lid when feeding. 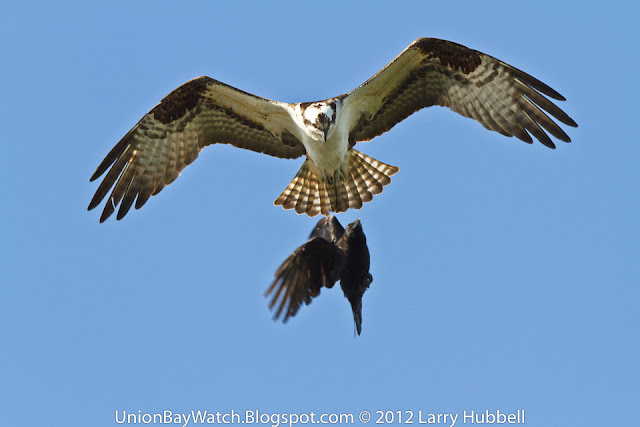 The photo above of the osprey and the crow was taken just north of the Arboretum at 5:30 pm one day last week. The osprey was attempting to fish the waters just S.E. of Foster Island. The crows on the other hand were returning to the area to spend the night. The osprey was initially chased away by one or two crows. He then returned a few minutes later and was chased away by a half a dozen crows. Within ten minutes he was back again and this time he was chased away by one to two dozen crows. During his time in this area he made only one dive into the water for a fish but came up empty. After flying thousands of miles to get here for the summer he is obviously hungry and persistent. The crows do not appear to be too hungry however they are most certainly persistent. The osprey now appears to be making it a habit to circle around Union Bay above the shallow waters near the land. 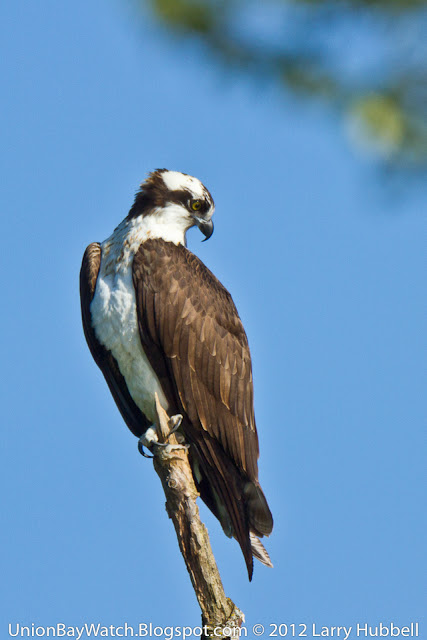 The good news was yesterday morning the osprey was back searching the water for fish while most of the crows were away scouring the streets of Seattle. 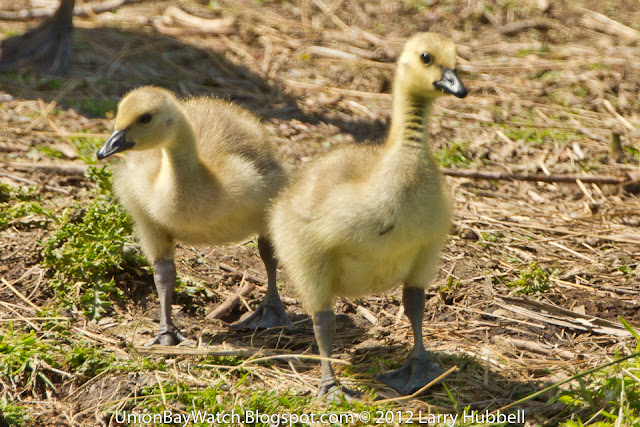 On the other hand it appears the more curious of the siblings is gone. The total count of goslings has been reduced to three. In addition it appears that these goslings have been taught to follow boaters and beg for bread. If you feel a need to feed wild creatures please consider the consequences. If while young (and cute) the goslings do not learn to feed naturally what will happen if the weather turns cold and no boaters are available to provide them food. 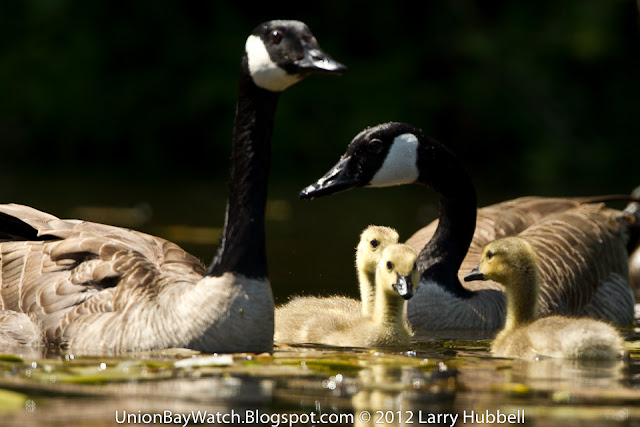 Yesterday in addition to the goslings there were also nine brand new ducklings just south of Foster Island. They were learning to feed naturally. They were practically hopping across the water snipping and snapping at tiny little airborne insects. The insects were of the variety that my uncle calls, "noseeums", although these young ducklings can certainly see them. 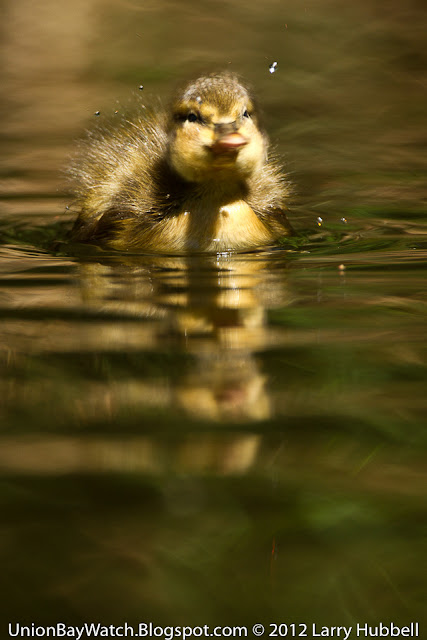 It was virtually impossible to catch all nine ducklings in the same photo. 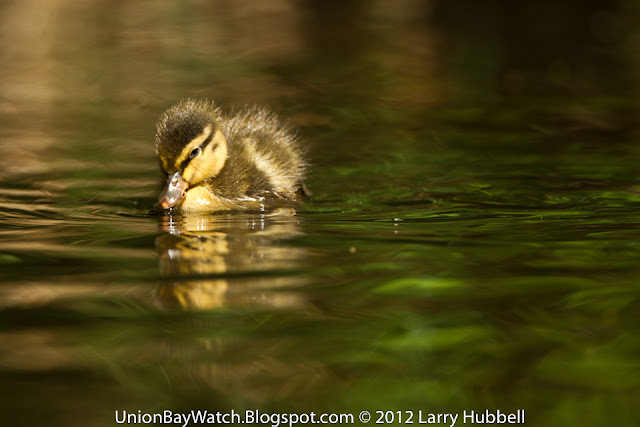 The mother was attentive but clearly taxed beyond her means. Her ability was reduced because she was missing her right eye. Having seen a Cooper's Hawk (see the fifth blog) while it was in the process of removing a Wigeon's eye, a Cooper's Hawk is the most likely suspect. The additional reasoning is as follows: 1) Five minutes later a Cooper's Hawk was seen being chased away by Red-winged Blackbirds. 2) The other birds of prey seen in this area are Bald Eagles and Osprey if either got their talons into a Mallard they would have punctured the heart long before the eye was removed. 3) The Cooper's Hawk appears to have a much smaller turning radius and would find it easier to catch a Mallard.

In any case it is amazing that this half blind Mallard recovered from such an attack and then was able hatch out nine ducklings and get them on the water and on their way to adulthood. Given this is being written on Mother's Day it seems appropriate to award this mother the first ever Union Bay Watch "Children First Award". 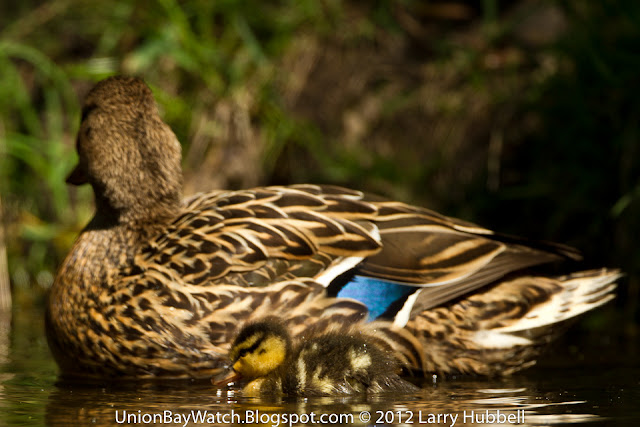 The last story for today's blog covers the functioning of a Great Blue Heron's upside down eye lid. This first photo appears to be just a bad photo, however the milky color of the heron's eye is not just a result of the speed with which his head plunges into the water. It is also because he has a waterproof eyelid that closes whenever his eye might get wet. 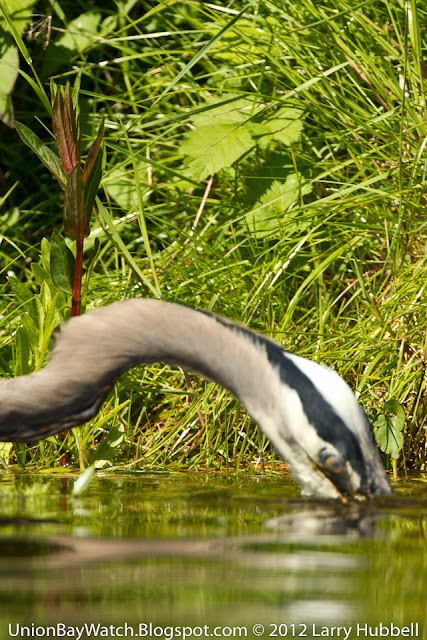 It is also interesting to note how far his neck is extended beyond the little red plant on the left side of the photo. In the next photo he retracts his neck and begins the process of tossing the fish into his mouth. 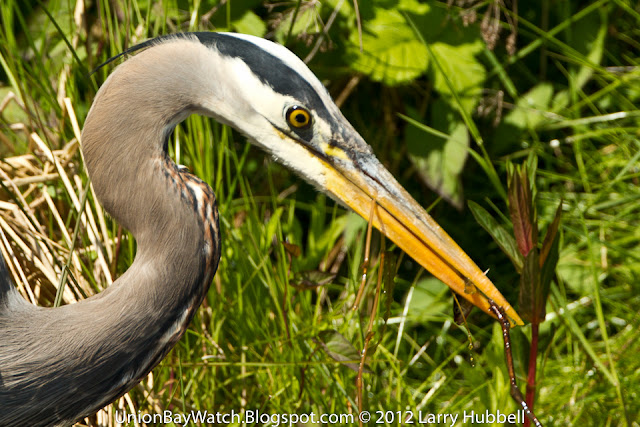 The red twig is now on the right side of the photo and his milky waterproof eyelid has been retracted. 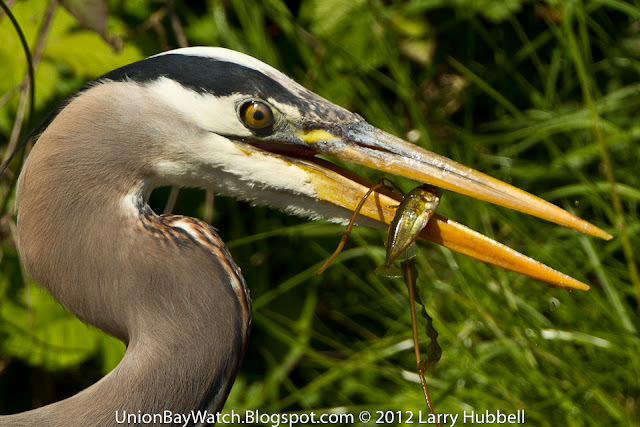 As the fish gets closer to the eye the waterproof lid is utilized again just in case the fish throws off a bit of water in the process. 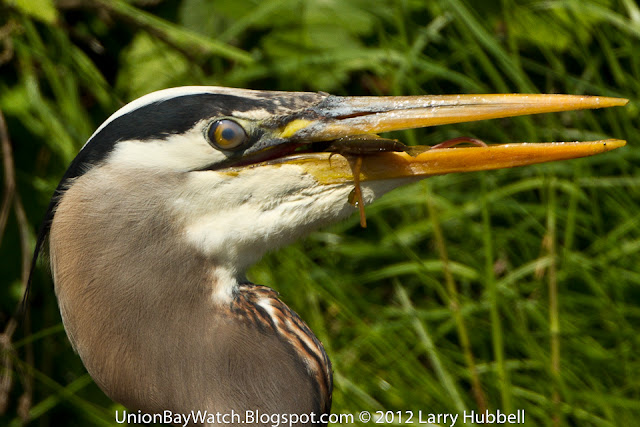 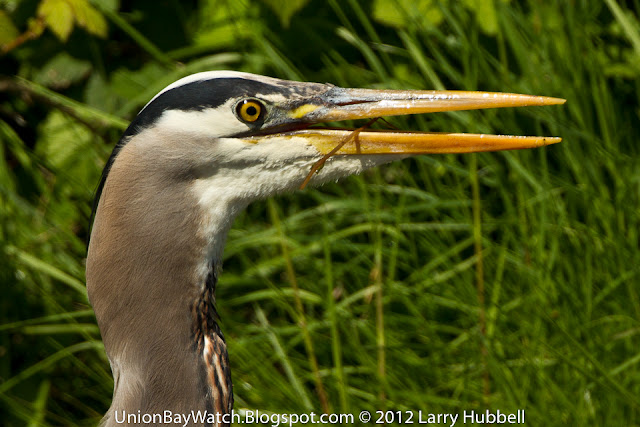 Finally with the fish safely down the hatch the eyelid is once again retracted.

Happy Mother's Day to you and yours!