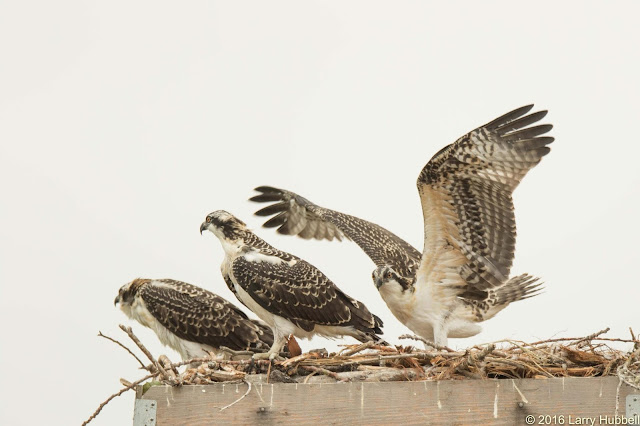 Three young Osprey preparing for their first flights from the nesting platform in 2016.

The osprey pair nesting on the platform at the Union Bay Natural Area (UBNA) has had seven young between 2016 and 2018. Five of their young successfully learned to fly and left the nest. Sadly, the two from 2018 did not survive.

This Spring has been filled with equal measures of anxiety and hope. Would the adults return? Will they successfully raise young in 2019? Will the young learn to fly e.g. fledge? It has been a bit of an emotional roller coaster. Happily, the adults Chester and Lacey have returned. By early May, their preparations for nesting certainly appeared to be headed in the right direction.

You can read about their April efforts and find a link to last year's story by Clicking Here. 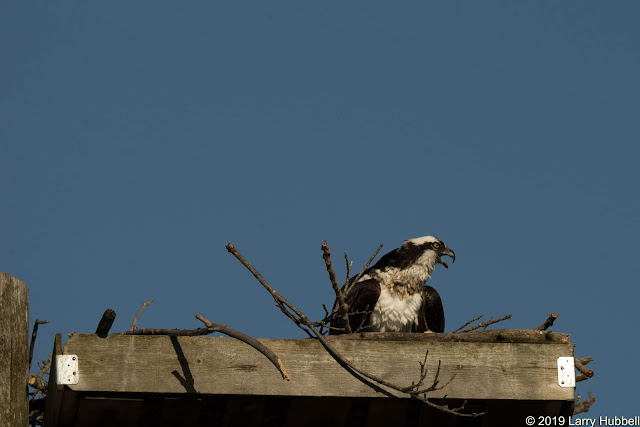 On May 9th, the female, Lacey, was sitting on the nesting platform and loudly begging her mate, Chester, for food. A male Osprey often brings food to its mate, especially when they think the female may be interested in mating or is incubating eggs. When the eggs hatch this responsibility grows dramatically. The males must then supply the bulk of the food to feed the young.

During the previous three years, by May 15th, Lacey has settled lower in the nest and appeared to begin the incubation process. Given this perspective, it was not a surprise to see Lacey at the nest site and still not incubating on May 9th. Maybe her 'early' begging was an attempt to reacquaint Chester with his future responsibilities. 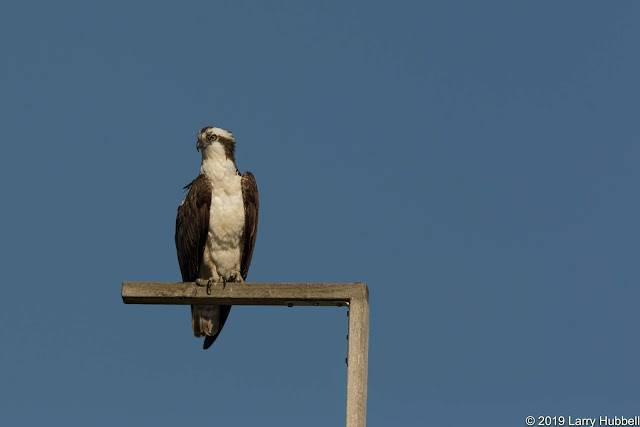 Chester who was sitting right overhead ignored her calls for almost ten minutes. 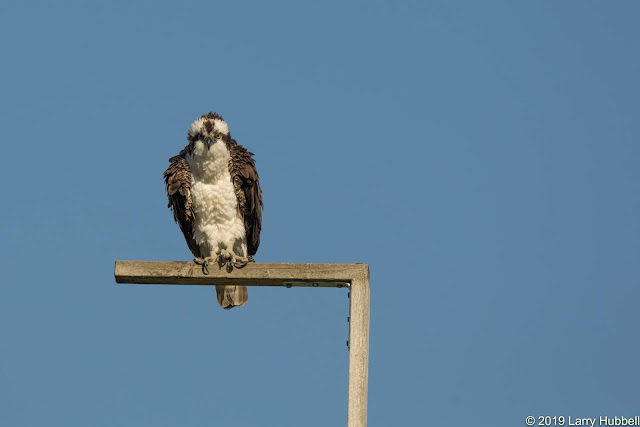 Finally, after a shivering shake, Chester appeared to come awake to Lacey's expectations. A few moments later he flew out over the bay and began searching the water for fish. 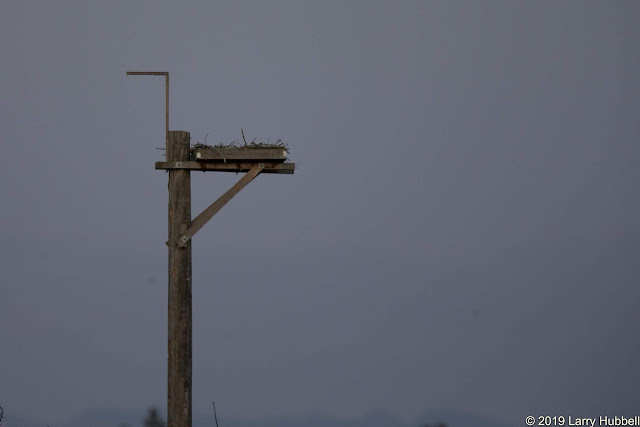 Sadly, May15th has arrived and passed and I have seen no sign of incubation at the nesting platform. However, there have been a number of interesting Osprey developments. Curiously, Chester and Lacey do not appear to have abandoned the area. As of earlier this week, they are still hanging around their traditional Union Bay territory. If they are constructing a new nest somewhere nearby I have not seen it. On the positive side, another pair of Osprey have established a new territory just a quarter of a mile to the north. 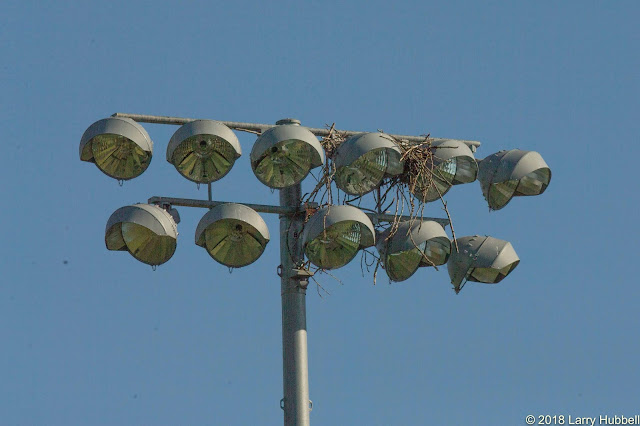 This part of the story started with a new nest being built above the Intramural Activities (IMA) field in 2018. In this July 2018 photo, the new pair's initial nesting attempt was evident. However, the new nest was not complete in time to lay eggs last year. 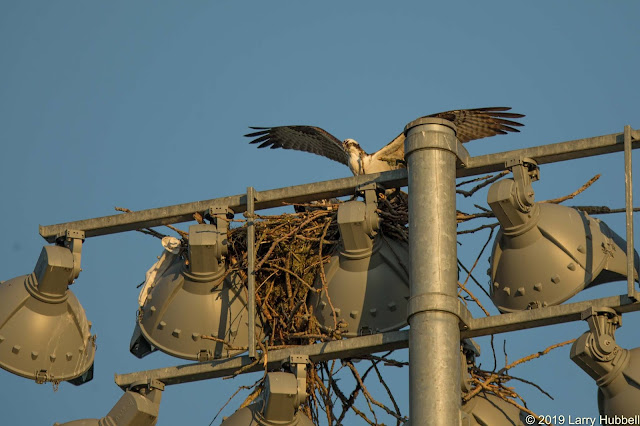 By May 8th, 2019, the new nest was much larger and both Osprey were actively involved. Here, the male is landing and the female is mostly hidden behind the crossbar. They traded off sitting in the nest, almost as if they were already on eggs, and the male brought the female food! (If I had the skill to accompany my posts with music, this is where I would cue in Handel's Hallelujah Chorus.)

One of the challenges, when watching four unique, and occasionally interacting Osprey, in close proximity, is trying to keep them straight. The brown necklaces on the females versus the pure white chests on the males helps distinguish them. Knowledge of their respective territories also helps but they do not always respect the invisible boundaries. 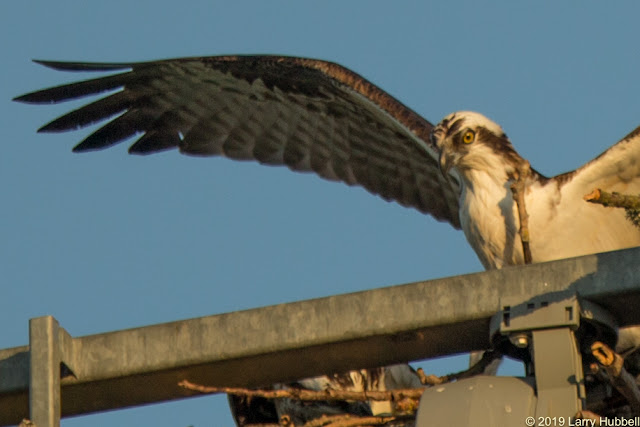 Since the male Osprey is primarily in charge of providing food for the family, and since the Steward on a ship is the officer in charge of provisions, I am suggesting we call this particular Osprey, Stewart. I certainly hope he can live up to his name and provide his mate and their future young with all the fish they require. 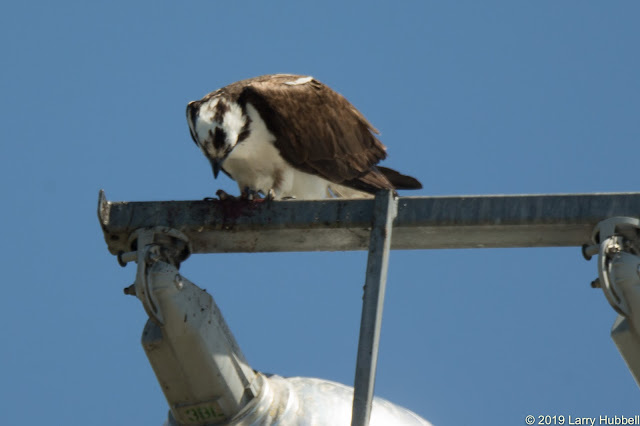 After Stewart landed at the IMA nest the female picked up her food and retired to a nearby tree to eat. 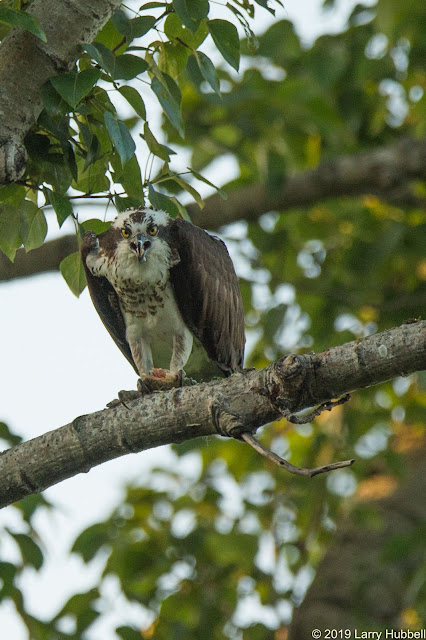 Luckily, the necklace on her chest has larger and darker spots when compared with Lacey's. In addition, her forehead, specifically the area between her eyes, is much lighter. The photo below helps to at least partially display these distinctions. You will find the differences are reinforced further in future photos.

Given that this female is now the only female Osprey near Union Bay who is currently incubating eggs naming her, Hope, seems like an obvious choice. 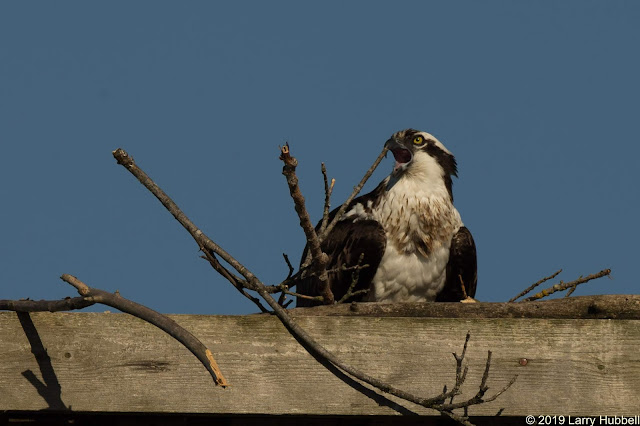 Last year, occasionally a third Osprey would visit Chester and Lacey's nest. Prior to 2018, whenever an Osprey flew anywhere close to their nest it was rapidly chased away. I suspected the third Osprey was more acceptable because it may have been one of their offspring - possibly one of the three in the first photo above from 2016.

Theoretically, it takes young Osprey two years, after their initial, first-year migration south, to mature and then return north to establish a breeding territory. I am wondering if the third Osprey, from 2018, might also be one of the new pair of Osprey who are nesting on the IMA light pole. 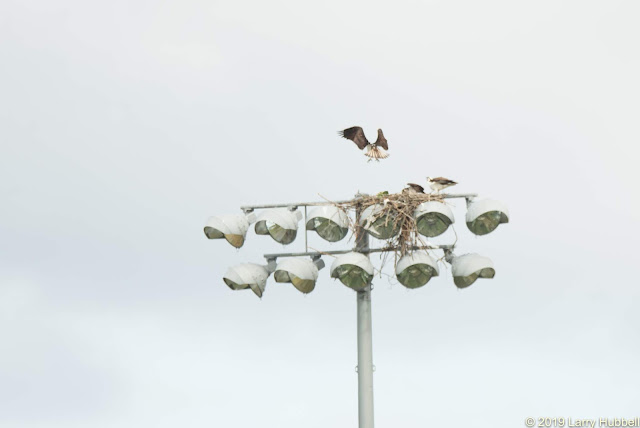 Last week, I saw two interactions that seemed to reinforce this idea of a family relationship. One example was when a second female approached the pair sitting on the IMA light pole. The response from the two resident Osprey was not particularly aggressive. 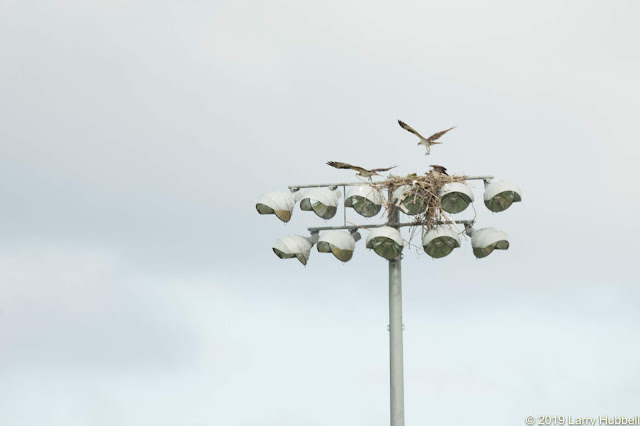 As the second female (I suspect it was Lacey) attempted to land on the light pole the male, somewhat reluctantly, hopped over and escorted her away from the nest. During the chase which followed it seemed like Stewart was going through the motions but not very concerned about the situation. This was all seen from a great distance so I was not able to establish the identity of the individual birds with great certainty. 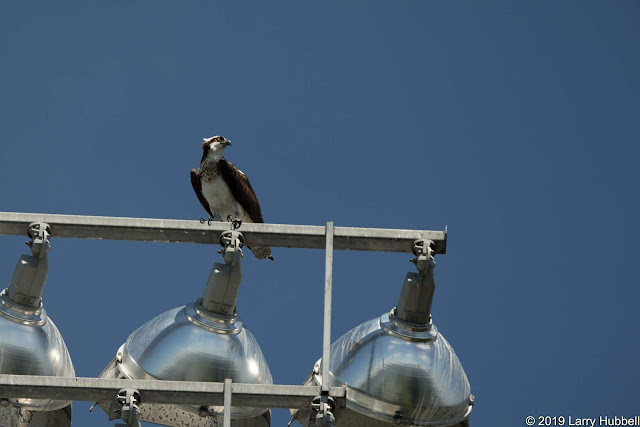 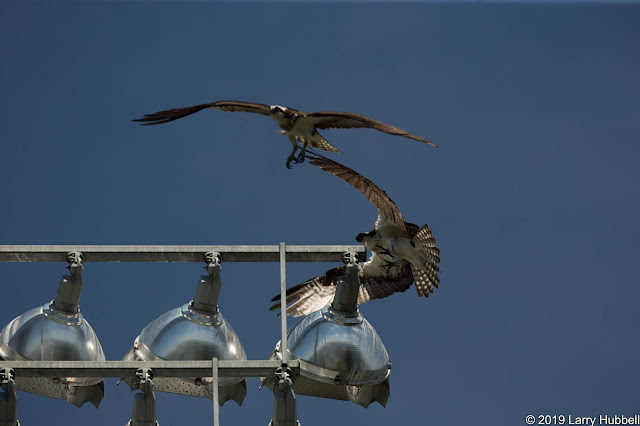 This attracted the attention of Lacey, who suddenly appeared and bumped, Hope, off the light pole. Like the previous example, this interaction did not appear to be highly aggressive. It seemed more like a point was made without anyone getting hurt. 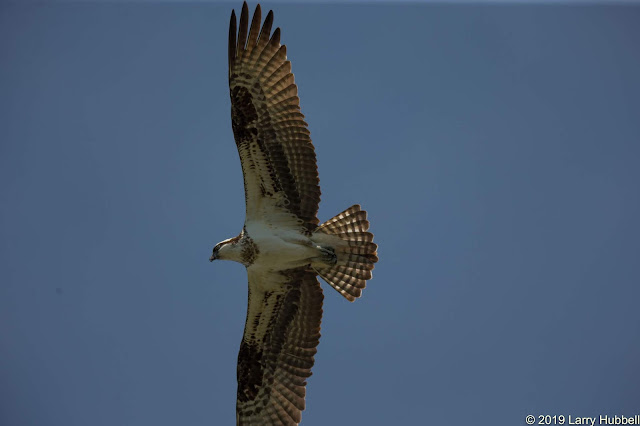 I have no doubt about the bumped female being, Hope, because of the obvious darker marks on her necklace. Lacey's motivation seemed fairly obvious. I suspect she did not want another female begging for food from her mate, especially while sitting in Lacey's territory. (Food deliveries among breeding birds are often consummated with mating.) 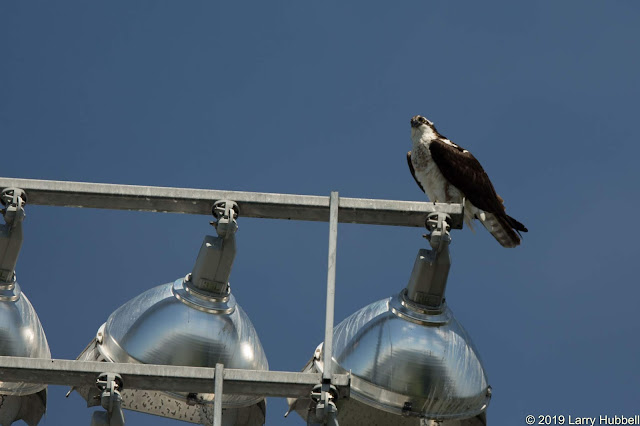 Finally, this photo of Lacey, immediately after the bump, clearly displays her more delicate necklace and helps to reinforce my identity assumptions.

I find the interactions between the two pairs of birds extremely interesting. Also, I wonder why Chester and Lacey have chosen not to incubate eggs this year. If Bald Eagle harassment was the motivating factor then I would expect Chester and Lacey would relocate to a safer place and establish a new nest. However, they appear to be staying on in their UBNA territory, and apparently are defending it, at least from other Osprey. It makes me question whether the local Bald Eagles are truly the issue.

I am very curious to see if young Osprey will successfully fledge from the new IMA nest. I am excited by the prospect of Stewart providing a sufficient supply of food and I am also enthused that Chester and Lacey may provide a buffer between the new nest and the Bald Eagles who traditionally hunt above Union Bay. I also wonder if and how Chester and Lacey may interact with new youngsters from the IMA nest. I wonder if the Ospreys comprehend the concept of grandkids. Will they all be one big happy family? I sure hope so!

Last week, one of my neighbors sent in a suggestion for a product called Birdsbesafe. It is a brightly colored cat collar which visually alerts birds to the presence of an approaching feline.

PAWS Cat City of Roosevelt in the U-District will start carrying the Birds be safe collars very soon. (Nice to buy from them. :)

And I can't help but include some pics of my cats modeling them. 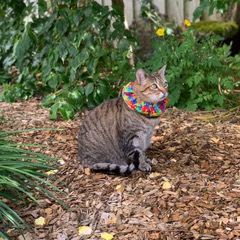 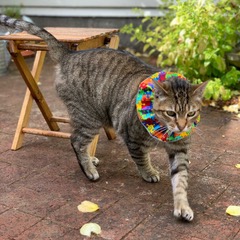 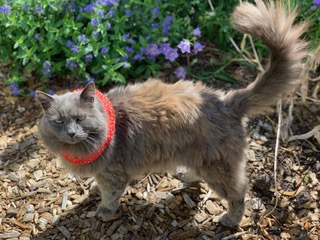 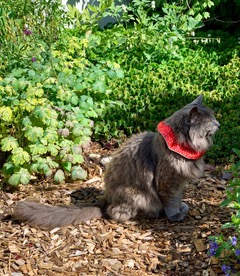 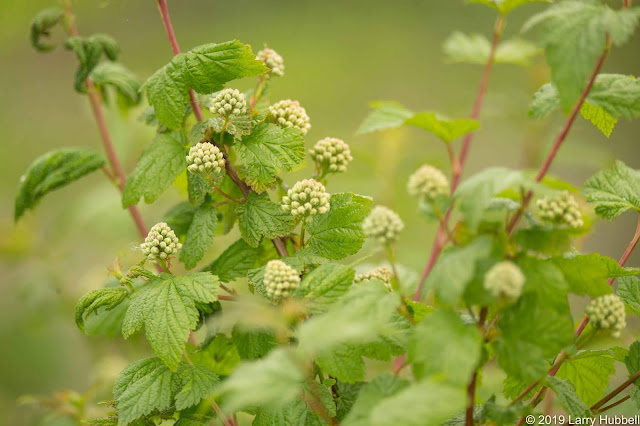 Pacific Ninebark: You can read more about this native plant by clicking on the highlighted link.

Posted by Larry Hubbell at 6:43 AM