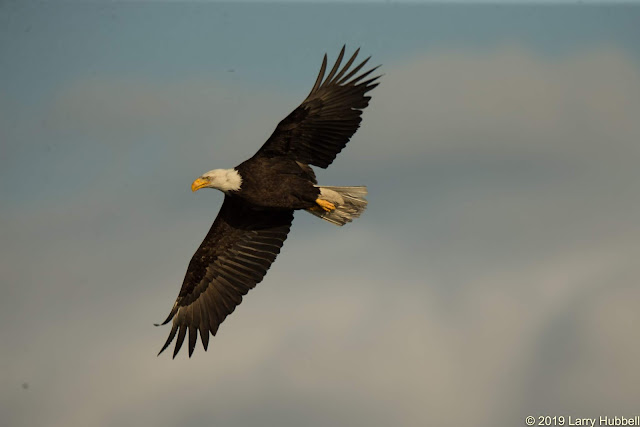 Yesterday, as Marsha flew north across Montlake Cut, it may have looked just like hundreds of other flights she has made. She landed in the old-world Cedars just north of the University of Washington (UW) Waterfront Activities Center (WAC). 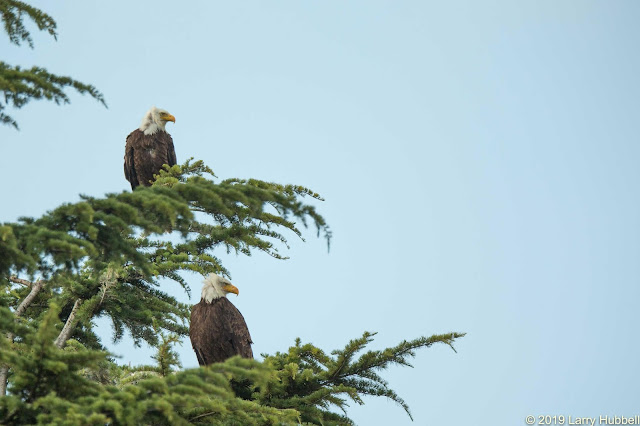 No doubt Monty called out to greet her as she arrived. Sitting on top of the cedar trees provides them an unobstructed view of Union Bay and many potential food sources such as fish, ducks, herons, and geese.

By the way, I have heard from multiple sources that, earlier this Spring, Bald Eagles raided the Great Blue Heron colony on the UW Campus. Apparently, they have put the colony out of business, at least for this year. Eagles have to eat and adults raising young are under a great deal of pressure.

I certainly hope the herons return and attempt to recolonize and raise young on the campus, next year. 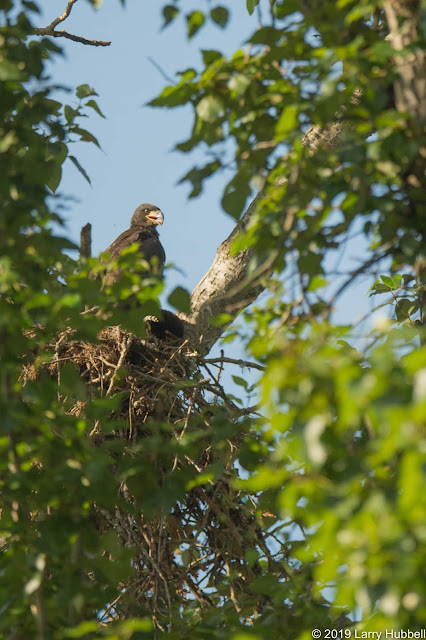 Since early May, I believe the eaglets have grown from hardball-sized eggs to nearly as large as their parents. The Center for Conservation Biology provides a nice summary of research which says that by six weeks of age, the eaglets they studied, weighed ninety percent of their mother's weight. (Click Here to read for yourself.) I am estimating that our Montlake Cut eaglets may now be six or seven weeks old. 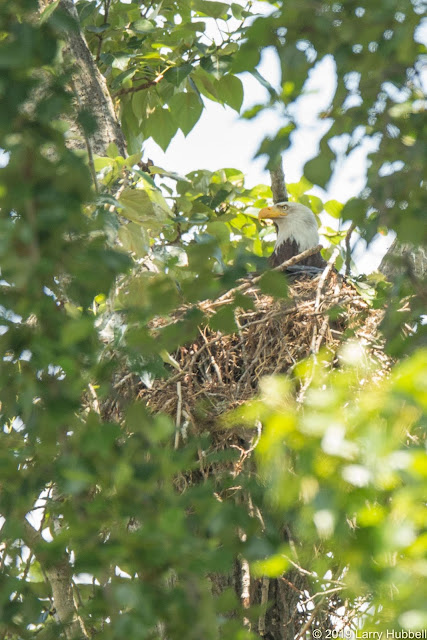 This photo, from earlier in the week, may be one of the last times we see Marsha apparently sitting down in the nest, at least during the current breeding season. The young eagles are simply getting too big and dangerous for the adults to remain within reach.

The parents will still deliver food but I do not think they need to provide much in the way of protection or warmth. The young eagles are now a significant danger to virtually any creature which is foolish enough to spend time in the nest. Also, I suspect they can now generate and retain all the heat they need - at least as long as the parental gravy-train continues. 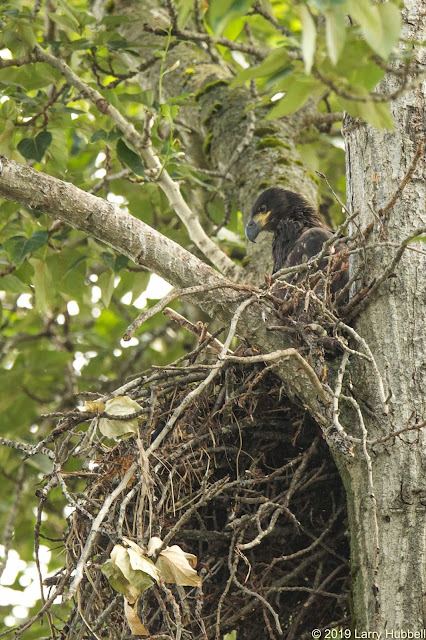 One obvious sign of juvenile development is their change of focus. Instead of sitting down in the nest, while looking up and watching for the parents to bring food, the young are now becoming much more observant of the world below. 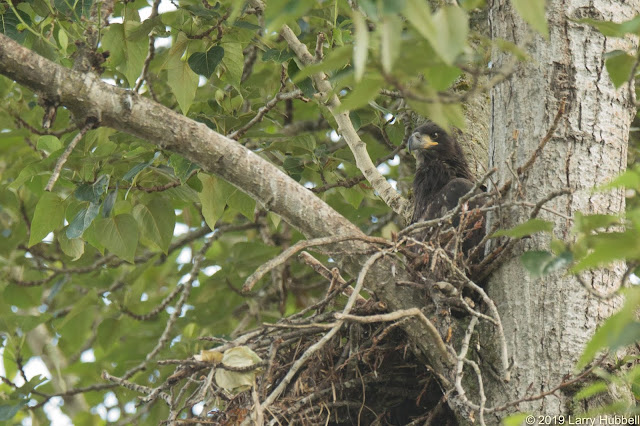 I wonder if they are watching the boats passing through The Cut or gazing at the sunbathers lounging on the opposite shore. They might be watching the Crows, Gulls or Terns as they fly by or observing the tasty young Canada Geese following their parents around on the water below.

Actually, I suspect their primary focus should be watching for fish migrating through The Cut. Historically, there were abundant upstream spawning grounds in the Lake Washington watershed back before The Cut completely changed the drainage. By the way, I found these spawning maps, for local Chinook, Sockeye, Coho and Kokanee, extremely interesting. 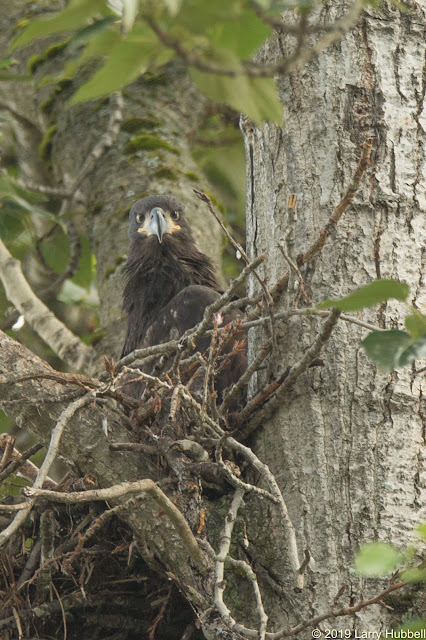 This was the first time I remember seeing one of the eaglets actually noticing my existence. In the future, no doubt this same piercing look will strike fear in the hearts of many creatures, just prior to their untimely demise. 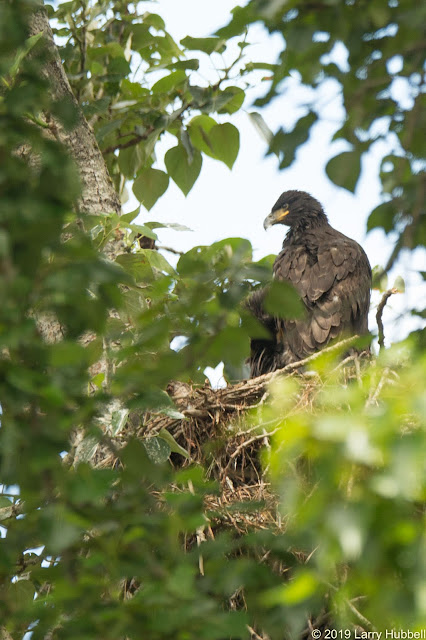 As the curtain of leaves closes on the south side of the nest the young eagles are clearly focusing down on the world of water to the north. 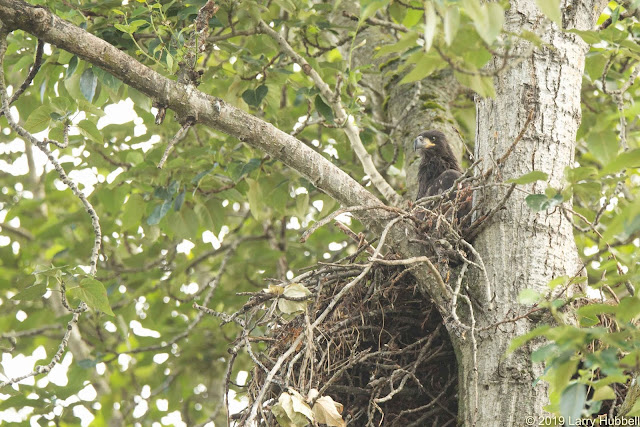 I suspect that during the next few weeks we will see the young move out onto this northern branch while exercising their wings. The process is aptly called, 'branching.' It hopefully culminates with a successful flight. I am guessing the first one will fledge sometime around the end of July. Click Here to read about the fledging process.

During the next six or seven weeks, if you see one of the young eagles on the ground, and especially if they are unable to fly, please do not approach them. I would recommend keeping people and pets away while immediately calling the Progressive Animal Welfare Society (PAWS) in Lynnwood at:

They can provide you guidance regarding the appropriate next step(s). 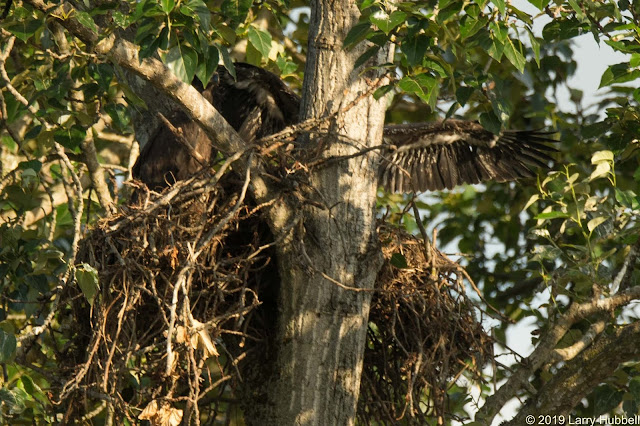 The reason Marsha's flight across The Cut stood out to me was because it was preceded by one of her young spreading its wings and beginning to flap. Marsha immediately left the nest and headed north. Yesterday, was the first time this year, that I observed one of the young eagles executing their strength-building exercise. Marsha's reaction seemed like a significant change to me. 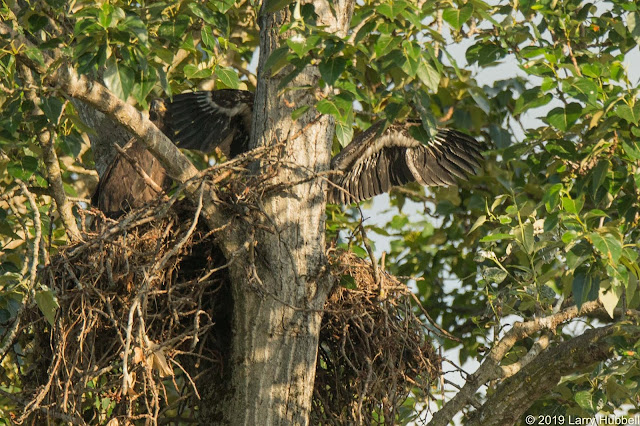 Even with their wings spread the young, dark eagles can be hard to see in the dappled shadows. The movement is easier to observe in person. In this photo, both juveniles are still in the nest. One is sitting to the left of the branch while the other is behind the main trunk with its wings open and visible on both sides. It will be interesting to see when they leave the nest for the first time. 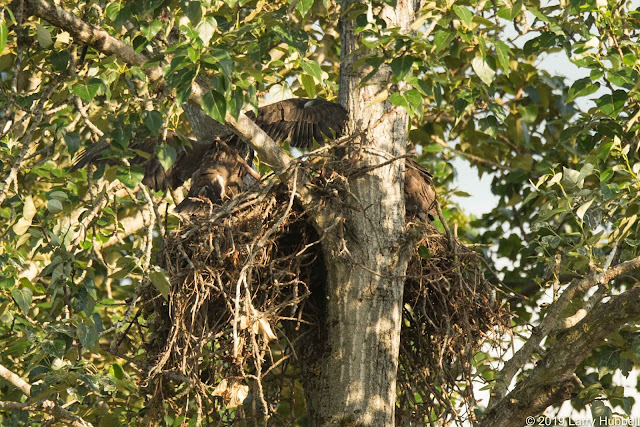 Here, the northern juvenile takes a turn at flapping. 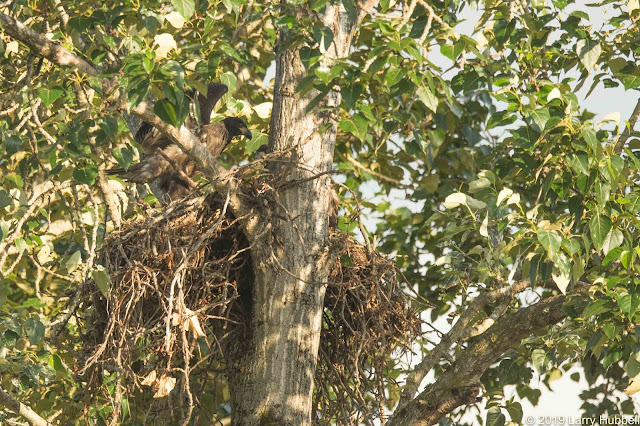 Surprisingly, the most visible sign of eaglet development cannot be seen by peering through the cottonwood leaves and searching the nest for the movement of young eagles. 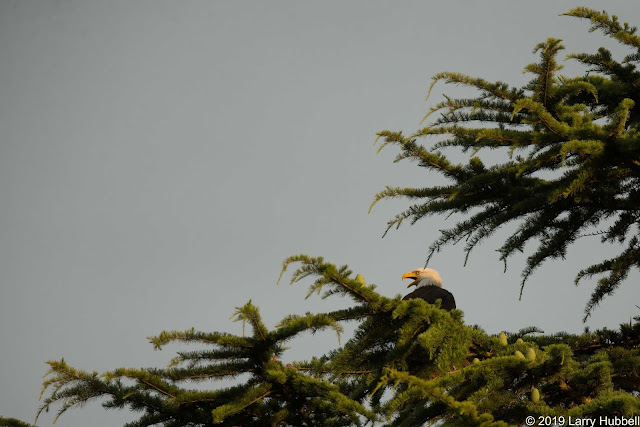 Their most obvious sign of development is the changing behavior of their parents. Monty and Marsha have dramatically increased time spent at their non-breeding roost, just north of the WAC. In the future, maybe we will remember this moment of change because it coincided so closely with the Summer Solstice. 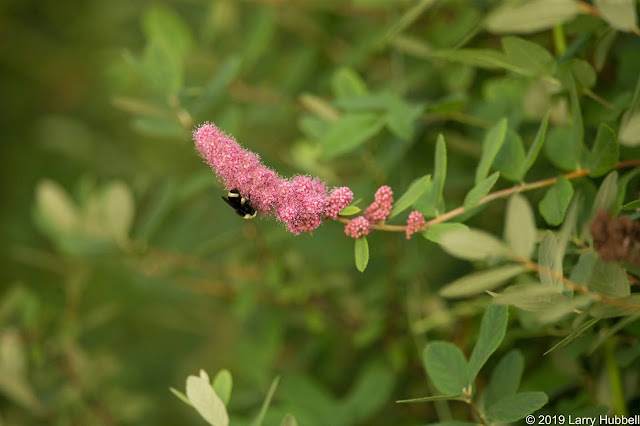 Spiraea (or Hardhack): This is a native plant. I suspect the bumblebee is a Yellow-faced Bumblebee, but apparently, there are a few other species that look very similar.

Posted by Larry Hubbell at 4:26 PM