On Friday morning (3/16/12) from Foster Island I saw two adult eagles near Yesler Swamp. By the time I got to the north side of Union Bay the eagles were gone. So I took my camera down the trail to the "Swamp" (I suppose we really should call it a wetland not a swamp. The term wetland seems more proper and respectful of it's value. I have seen a wide variety of birds in this small little corner of the Union Bay Natural Area.) In any case as I was shooting photos of a female hooded merganser I heard crows raising a racket behind me.


My first thought was may be the eagles have returned and the crows are ganging up on them. I only had 15 minutes left to take photos anyway so I decided to head back towards the car and check for the eagles. As I headed back up the trail I was switching the camera and tripod from one arm to the other and not paying too much attention to the trail in front of me. Suddenly there was a flurry of action barely 10' in front of me. One of two birds lifted off and landed just a few feet further away on a low branch of a maple tree. The other bird struggled slowly to it's feet.


The bird in the tree was a hawk, while the one standing on the ground was a wigeon.


I had accidentally interrupted a life and death struggle. I backed away from the birds wondering what would happen next. I set up my camera and waited. The hawk kept its focus on the wigeon. 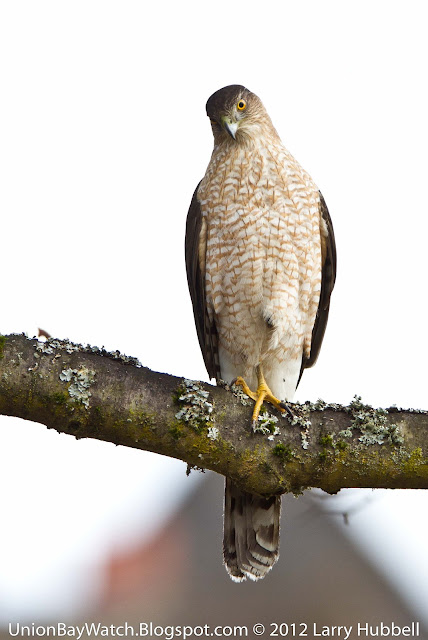 The wigeon looked stunned and confused with a small amount blood on his lower chest. 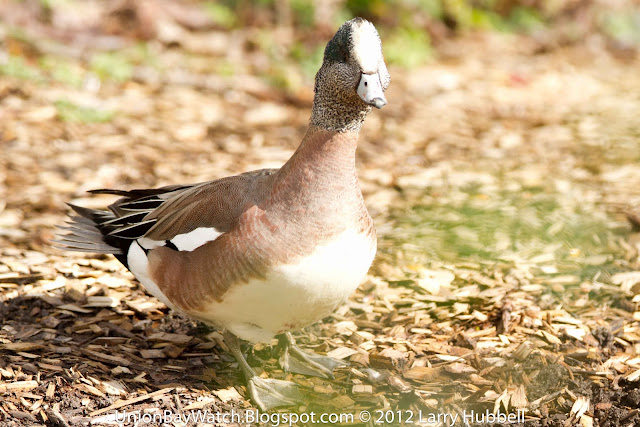 I was surprised at how long they both simply waited. I did not notice until later when I was studying a photo that the wigeon's right eye was missing. I am still not sure which bird flew first. 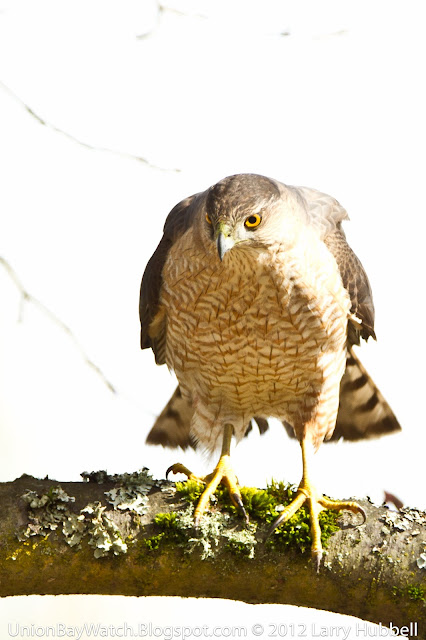 Suddenly the action resumed. The wigeon headed south with the hawk in close pursuit. As the hawk brought the wigeon to the ground a second time the crows came out of the trees and dive-bombed the hawk. It almost seemed like they were trying to defend the wigeon. 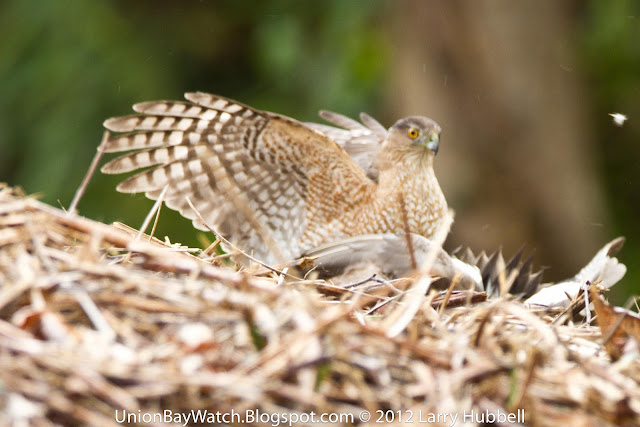 Once again the hawk ended up in a tree, although it was an alder tree this time. 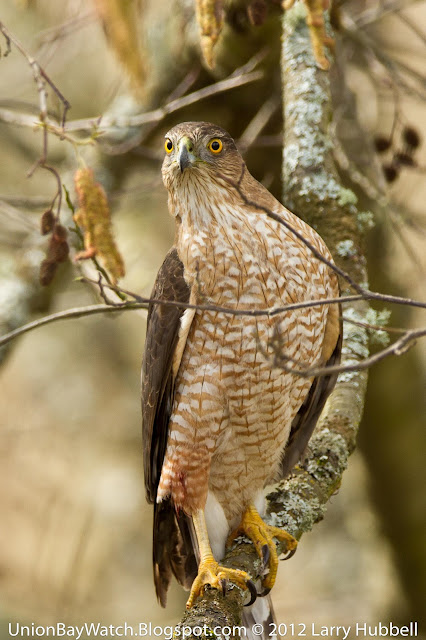 Once again the wigeon got to it's feet and this time wobbled quickly away into the undergrowth. I had to leave, but I came back on Saturday and did not find any remains. It seems the wigeon may have escaped, with the help of the crows.

I assumed that the hawk was a Cooper's Hawk, but a neighbor who saw the photo suggested that it might have been  Sharp-Shinned Hawk. I checked my National Geographic Field Guide and it said that a large female Sharp-Shinned could be up to 14 inches and a small male Cooper's Hawk could also be 14 inches.

The guide said the SS's tail is more square and some times notched while the CH's tail is more rounded. This hawk seemed to have a rounded and notched tail, so this did not resolve the issue for me. It also said the SS has a smaller head but when you do not have the two side by side that can be hard to judge. In the end I decided to visit the Cornell birding website where I found some very helpful information.

The most obvious difference for me was the shape of the chest, shoulders and head. To me it looks like the Sharp-Shinned is wearing shoulder pads while the Cooper's Hawk has shoulders that are more narrow than it's waist. It turns out that I happened to get some photos of a Sharp-Shinned Hawk in 2010 about 100' from where I took these photos. So here is a side by side comparison so you can see the differences. 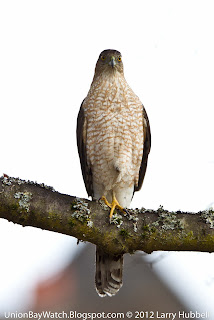 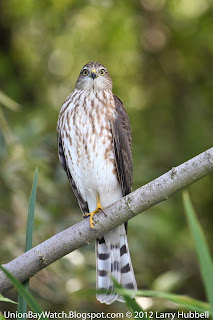 The following Cornell link shows that the Sharpie on the left is a juvenile bird because of the vertical as opposed to more horizontal striping. Very interesting!


I will be very curious to hear if anyone spots the one-eyed wigeon.


May the crows be with you!