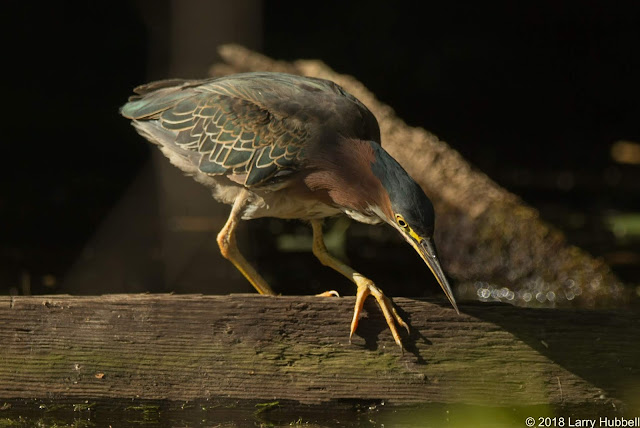 There are multiple reasons why Green Herons can be an uncommon sight. For one thing, they are relatively small. It would take approximately ten Green Herons to equal the weight of one Great Blue Heron.

Green Herons are also bashful. Unlike American Crows, who will look you in the eye and raise a ruckus because you are breathing their air, Green Herons will quietly turn tail and flee before you even see them. When a Green Heron chooses to ignore your presence, they often stand stock-still and remain virtually hidden in plain sight.

Their posture and relatively short legs also contribute to their low profile. Plus, their rich and varied coloring makes excellent camouflage. Apparently, while nesting they can become even more secretive. So far, I have yet to see a Green Heron on a nest. 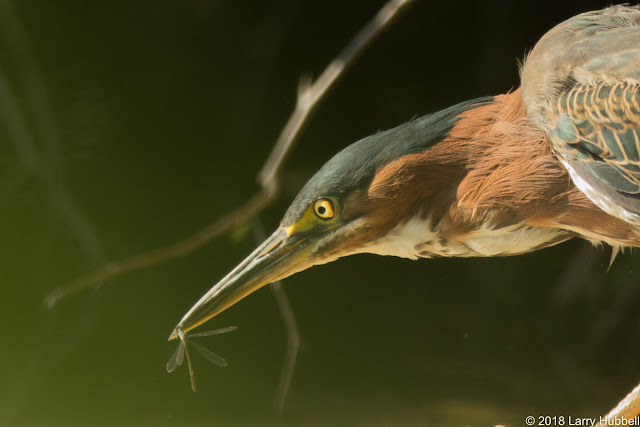 They will eat almost anything within reach, although they focus mostly on small fish. 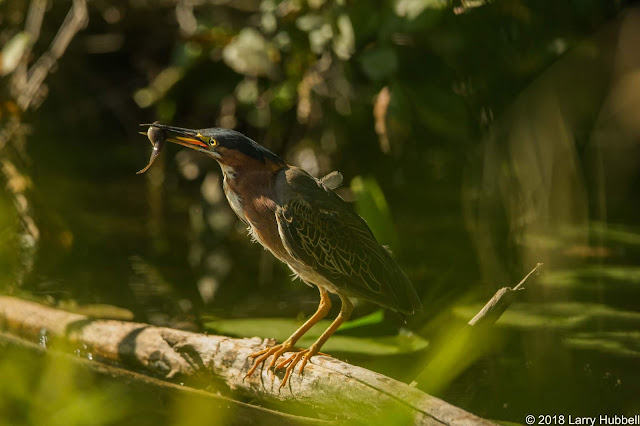 Tadpoles and frogs are also acceptable. If you have ever seen a successful Green Heron hunt, no doubt you have been impressed by their secret weapon. 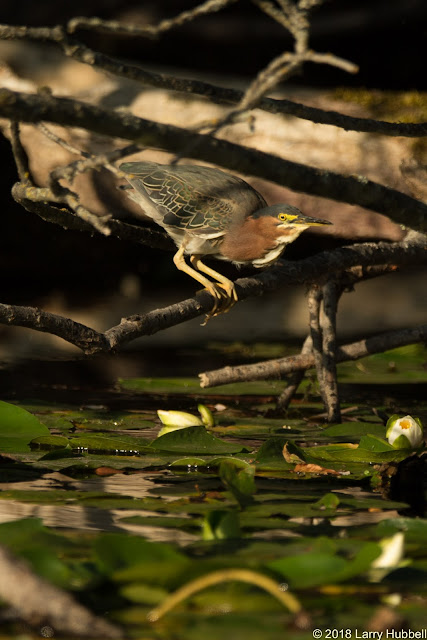 They can appear to be sitting quietly, enjoying the sunshine, when actually they are a bundle of tightly wound muscles waiting to strike. When a fish, frog or damselfly attempts to pass by, they may mistakenly assume that they are safely out of the heron's reach. 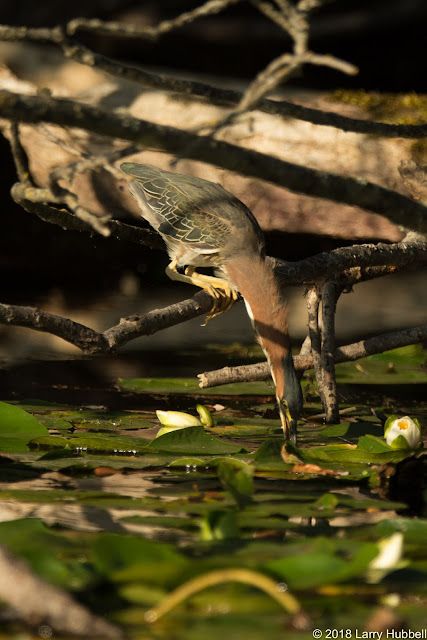 Faster then the eye can follow, the neck extends and the dagger-like bill closes on the unsuspecting prey. How a Green Heron can retract such a long neck and make it virtually disappear, is beyond me. With Great Blue Herons, the neck works in a similar fashion but the length of the neck is almost always apparent - even when retracted into a 'S'. 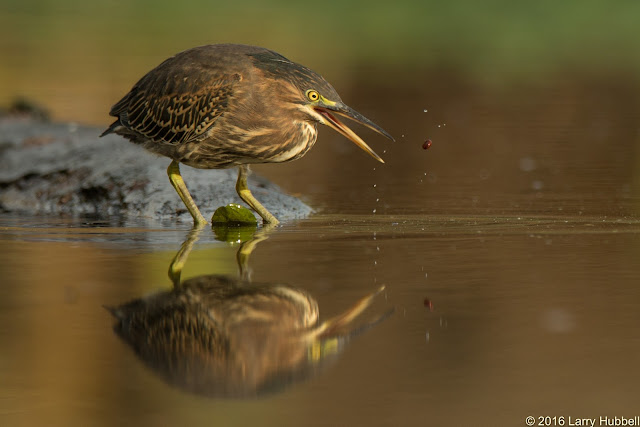 Green Herons have an intellectual advantage as well. They are smart enough to pickup a twig or a seed and throw it out onto the water. When a fish surfaces to inspect the potential meal they can quickly become the heron's sushi snack instead.

Unlike the previous photos, the photo above was taken in November of 2016. Almost all of my Green Heron photos have been take in July, August or September. Last year, I started to wonder why that was. Do northern birds migrate south and increase the numbers during the late summer? Do young birds leave their nests and double the visible population? Are there other factors in play? 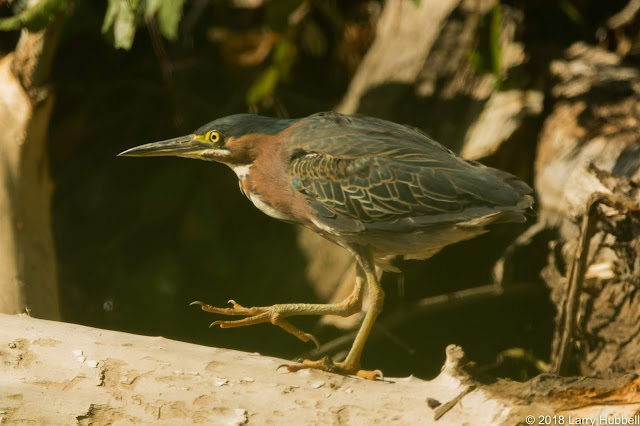 This year, I have tried to pay closer attention to the age of the Green Herons in hopes that I might better understand their fairly dramatic change in visibility. When comparing this heron with the one in the 2016 photo, can you tell which one is oldest?

I have also been wondering if it is possible to tell the visible differences between males and females. 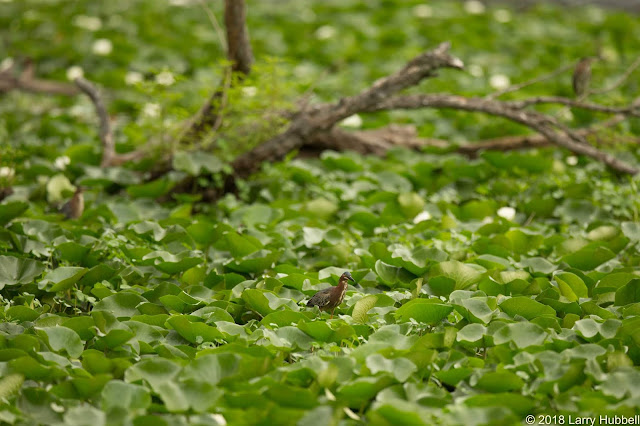 Later in July, I happened to catch three Green Herons is one photo. My focus was on the bird in the front and center. To the upper-right and on the left you can just barely make out the shape of two more Green Herons. The differences in their colors and patterns became immediately interesting to me. 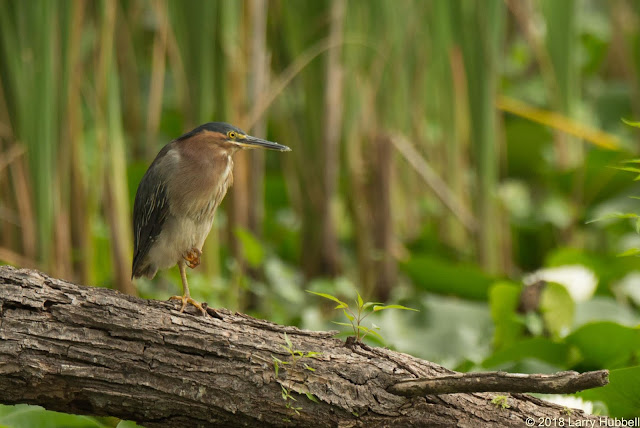 This is the bird on the left in the previous photo. 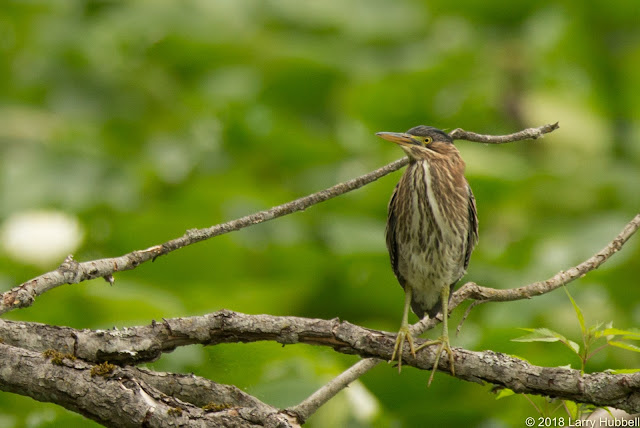 This is the bird from the upper-right side of the photo. 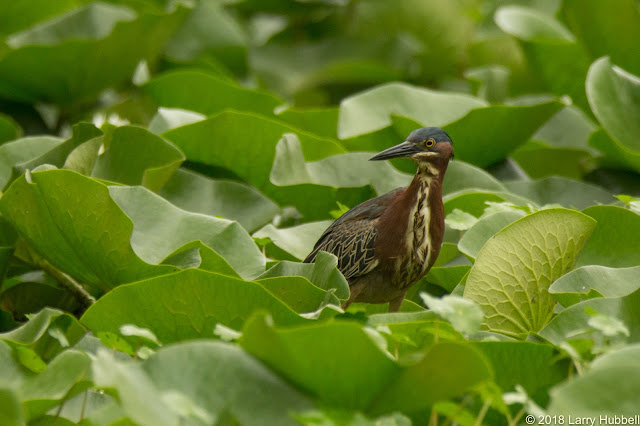 Finally, this is the heron which was directly in front of me. Take a moment to consider the differences between these birds. I believe there are both age differences and potentially gender differences as well. 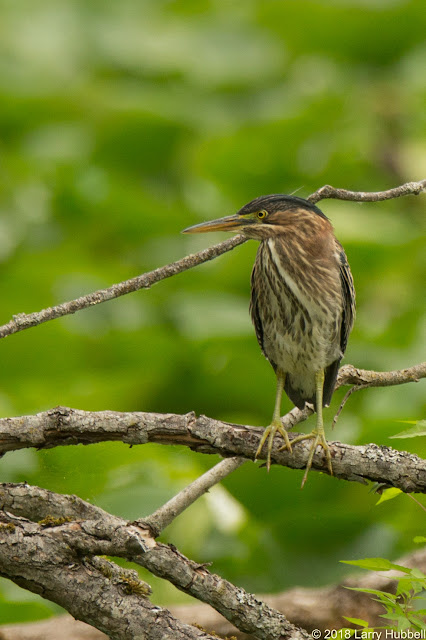 Because the sides of the neck are streaked with white we can conclude the bird on the right is a first-year bird. Also, notice the yellow 'spectacles' which surround the eye and extend forward to the bill, and the mostly yellow coloring of the bill. 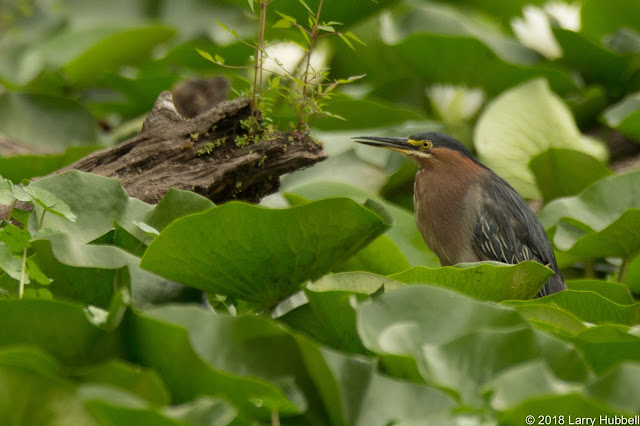 The bird from the lefthand side of the photo has a neck which is unblemished on the sides. This indicates it is a mature bird i.e. more than a year old. The 'spectacles' are not quite as large but almost more obvious due to the increasing contrast with the cap and the bill. 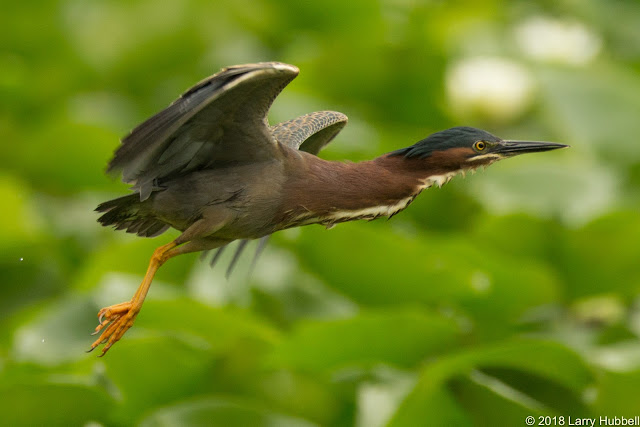 The bird which was front and center is also a mature bird due to the unblemished sides of its neck.

Birds of North America* says, '...females tend to be smaller, duller and lighter.' In this case, that makes me think this is an adult male and the left-hand heron (in the previous photo) is an adult female. 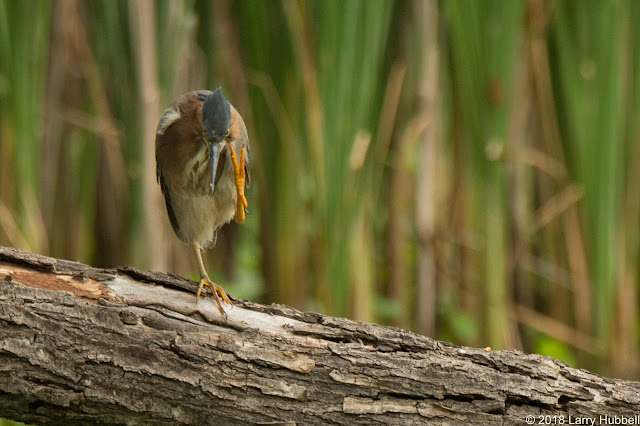 Here is another shot of the left-hand bird.Notice the orange color on the sole of the foot versus the yellow coloring on the leg and the top of the other foot. I believe that as Green Herons age the coloring of their feet and legs turns from a greenish-yellow to orange. If true, then the adult male, i.e. the bird in flight, is certainly the oldest of the three birds. 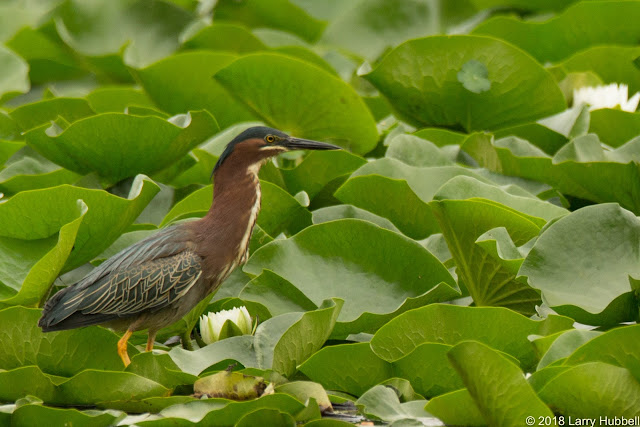 Here is the adult male after he resettled. Notice his spectacles are almost invisible. In reference to the spectacles Birdweb says, 'These markings are present, but less pronounced, in the adult.' It also appears that the bill color darkens up as these birds age. 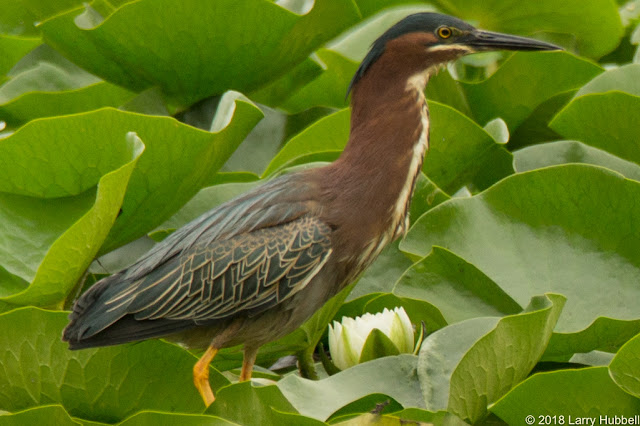 Can you spot one more difference between this adult and... 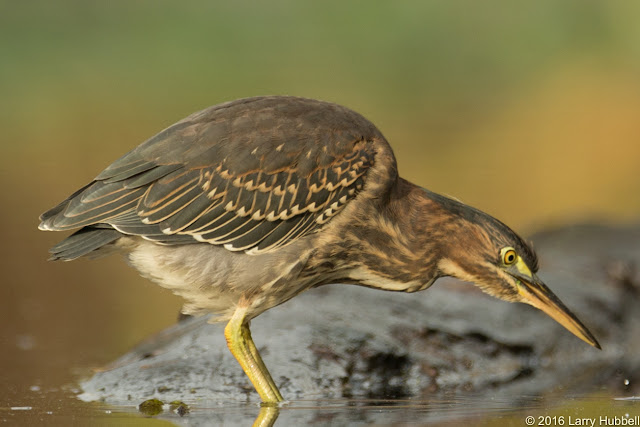 ...the young bird photographed in 2016? The profusion of small, whitish, upward-pointing triangles also indicates a young bird. These light markings wear away with time. 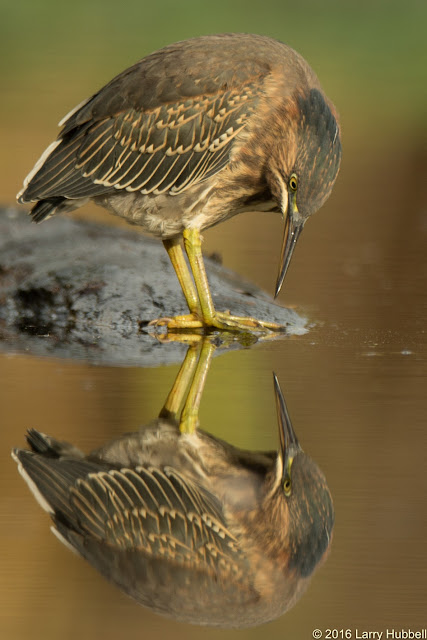 Finally, Birds of North America (BNA*) states that A.C. Bent and H.C. Oberholser believed that the brown stripes in the crown of a juvenile indicate that the bird is a female. BNA goes on to suggest that this is area in need of further research. Regardless, it is another interesting difference between a juvenile and an adult Green Heron.

In conclusion, I suspect that migration, fledging and maybe even the proliferation of lily pads (as a hunting platform) may all combine to explain why I consistently see more Green Herons during this time of year. Another factor could be the absence of other breeding species, which have already headed south, and the fact that most wintering species have not yet arrived. This general lack of alternative species to watch may also help focus my attention on Green Herons.

In any case, I sure hope your get the chance to visit Union Bay and see a Green Heron's secret weapon in action! 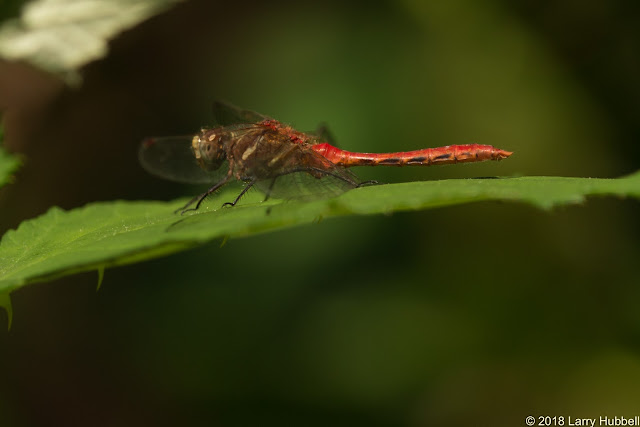 What species of dragonfly is this? Is it native to Union Bay?

Cardinal Meadowhawk: I believe this dragonfly is native to Union Bay. Did you know that Dennis Paulson, who teaches the Master Birder Class for Seattle Audubon, is also a world-renown expert on dragonflies? Dennis' Field Key to Adult Washington Dragonflies is easily accessible by Clicking Here.

Posted by Larry Hubbell at 1:13 PM