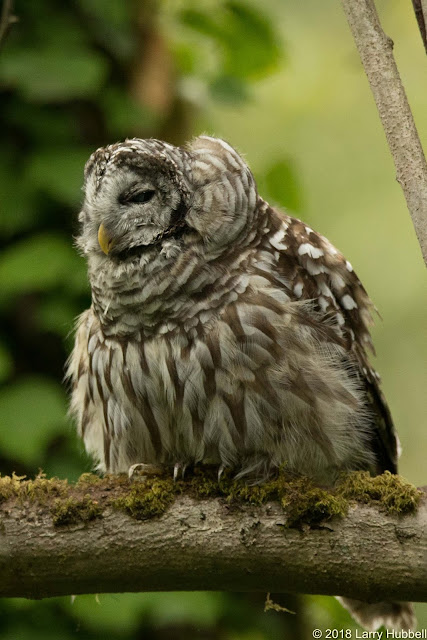 Earlier this week I was attracted by the sound of an irate crow near the mouth of Arboretum Creek. As I crept closer to the commotion I spotted this owl. The sleepy predator was obviously the object of the corvid's disaffection. 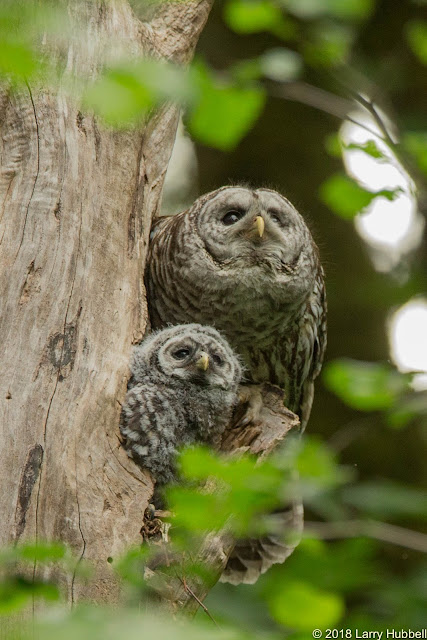 It has been roughly three months since we watched this young Barred Owl leave the confines of its original home. You may read the story in the June post named, An Owlet Adventure. 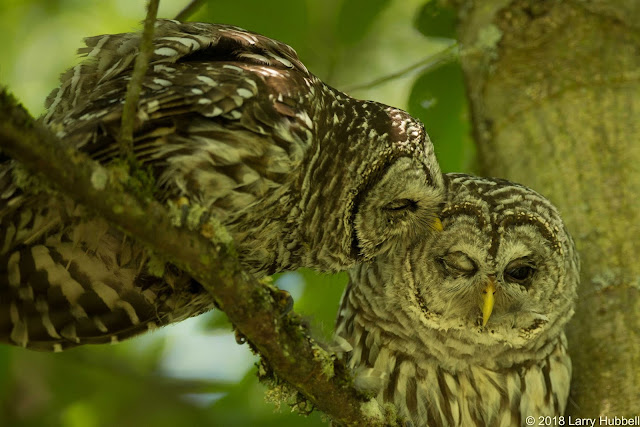 In late July, I spotted this pair near the mouth of Arboretum Creek. Clearly, the larger bird on the right is an adult and most likely female. In *Birds of North America it says that female Barred Owls can weigh 30 to 40 percent more than their mates. I wondered if the bird on the left was her mate or her offspring. After comparing this picture with the following photos I am thinking he is most likely her mate. 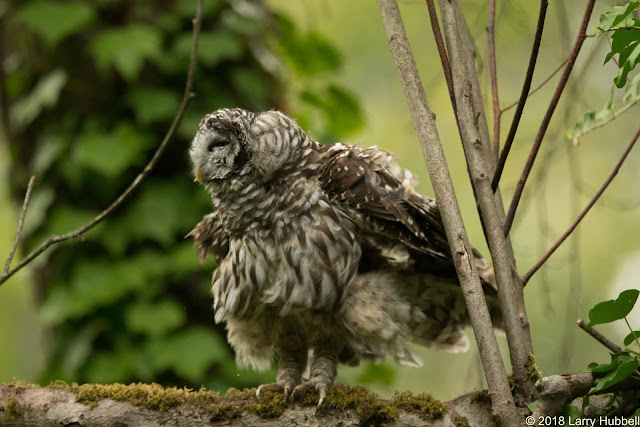 When the owl which I was watching this week shivered, I caught this rather unusual photo showing its feathers all askew. 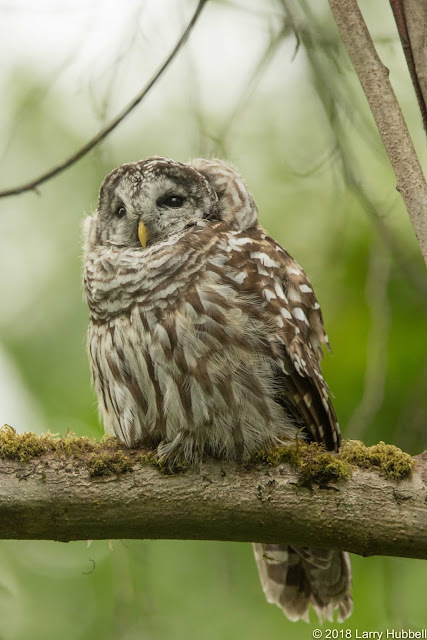 A moment later, the feathers fell back into place. Even so, there was an unusual 'ruff' of feathers sticking up around the owl's head. 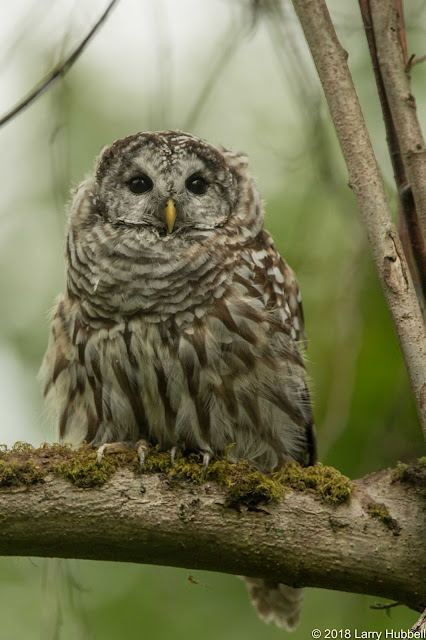 As the owl began waking up and looking around, these next few photos show little wisps of downy feathers momentarily sticking out at odd angles. 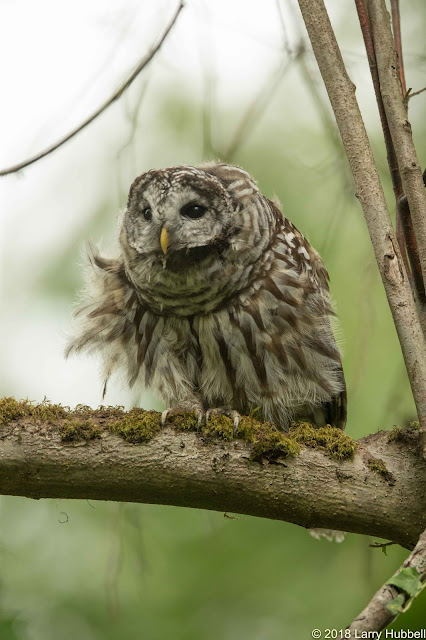 I do not remember the day being especially windy. In any case, I have never seen a whole clump of feathers stick out like this with a mature Barred Owl. There are other clues which I believe indicate this bird's immaturity. 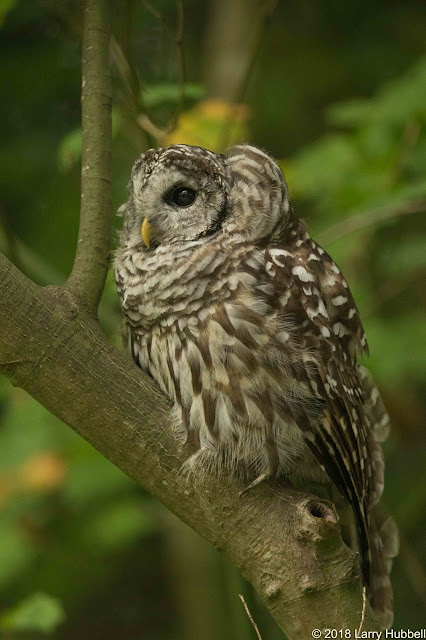 When the bird flew to a nearby perch the collar or ruff around the head stood out even more.

The fact that the owl landed on a branch having a 45 degree angle also makes me think it was young. Adult owls have a strong preference for horizontal branches. I suspect a flat perch enables the owls to have a wider radius of attack and therefore increase their odds of a successful attack. 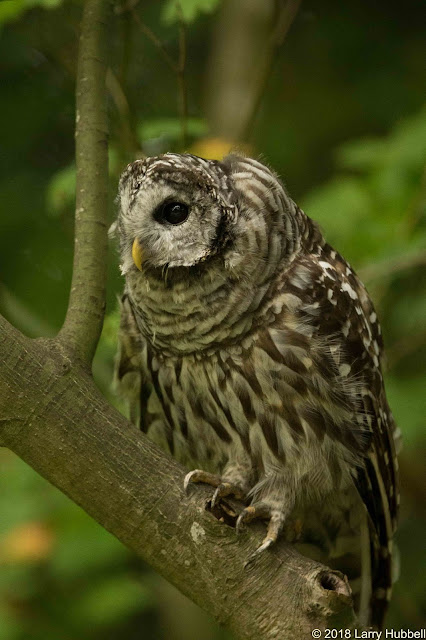 For example, from this perch any potential prey on the owl's right side would have extra time to escape while the owl attempted to navigate around the branch. 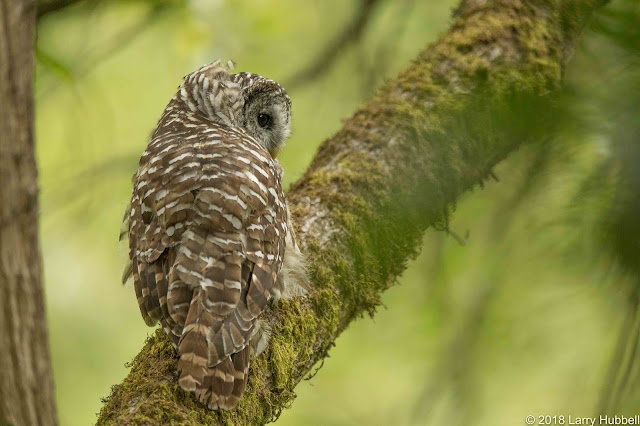 The next perch the owl chose had the same type of drawback. However, this angle of observation provides another clue regarding the bird's age. Birds of North America refers to the work of A.C. Bent when it states that in their first few months, young Barred Owls replace most of their body feathers - but not their wing or tail feathers. 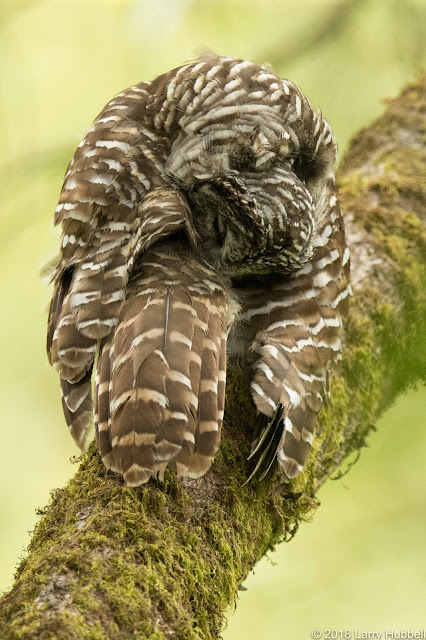 This information is helpful because the light barring on young tail feathers is more buff colored - instead of white. By next Spring the buff coloring should be gone. 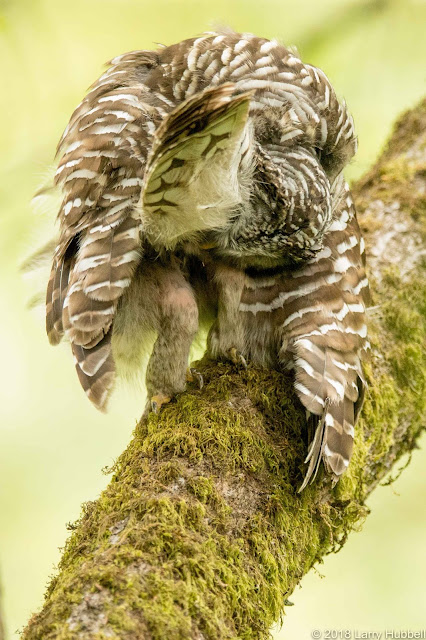 I suspect the extensive personal grooming may be partly due to all the young downy feathers needing to be removed. 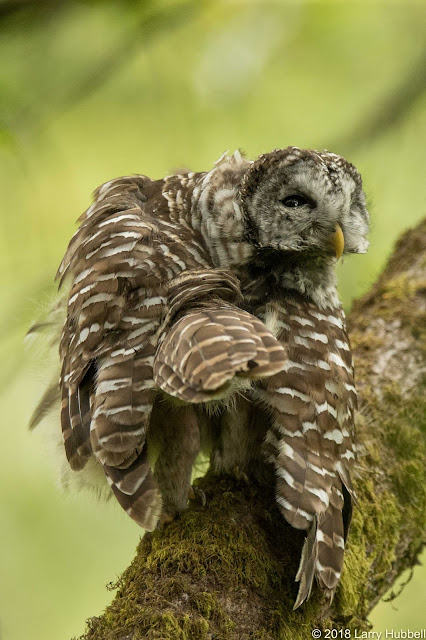 Certainly, this resulting pose is not common among adult owls. 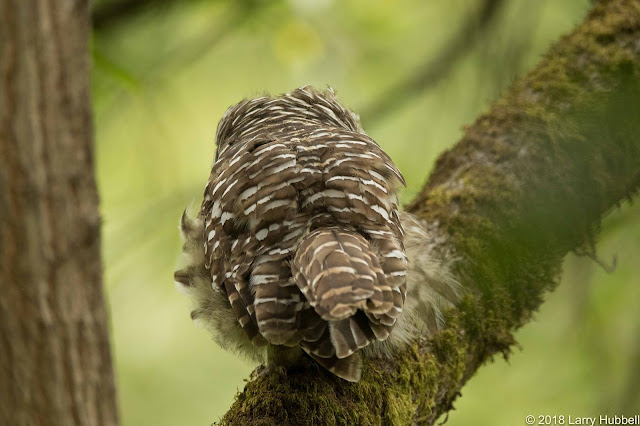 Feathers sticking out in multiple directions reinforces my conclusion. 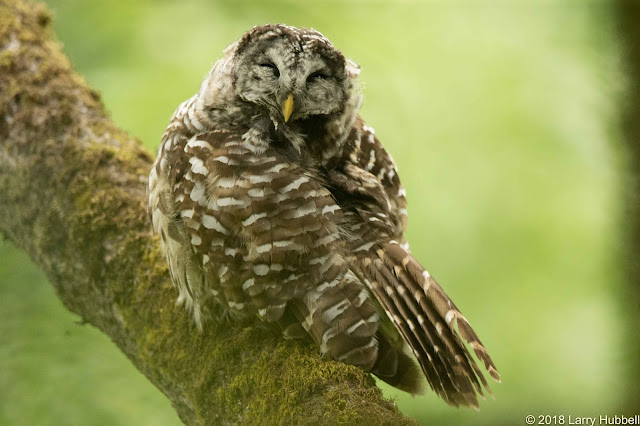 One year I watched and heard four young Barred Owls in Arboretum begging their parents for food. This year there was only the one successful fledgling. I never heard it begging. Maybe the two-to-one ratio of parents to offspring helped keep this bird very well fed. It is reassuring to know that this bird has survived the summer and is well on its way toward maturity. 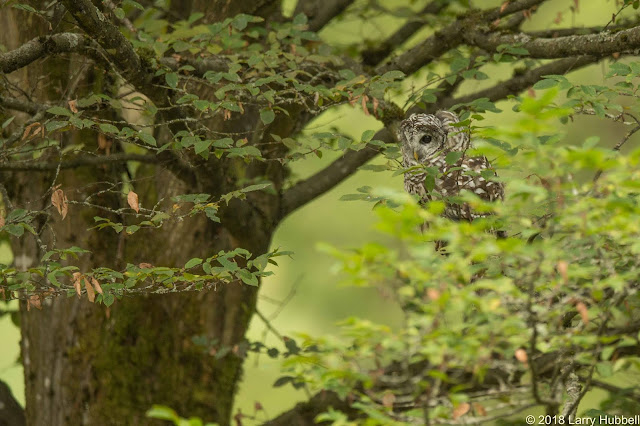 As I prepared to leave, the young owl moved to a more horizontal branch closer to the stream and assumed an active hunting stance. I suspect that by next Spring, when the parents begin to focus on raising a new brood, this young bird will have been totally on its own for a number of months. Hopefully, its growing maturity will help this bird survive the challenges of winter.

Have a great day on Union Bay...where nature grow's up in the city! 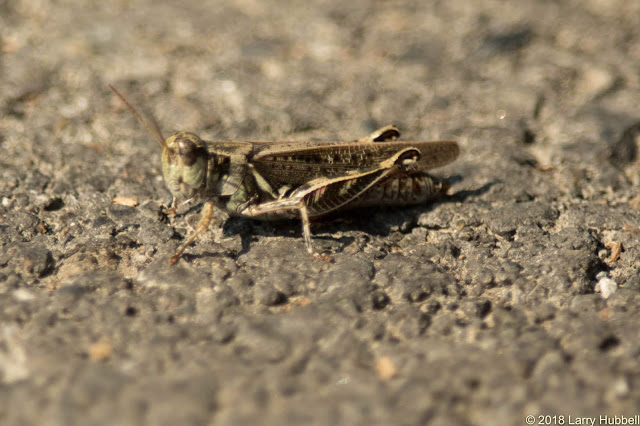 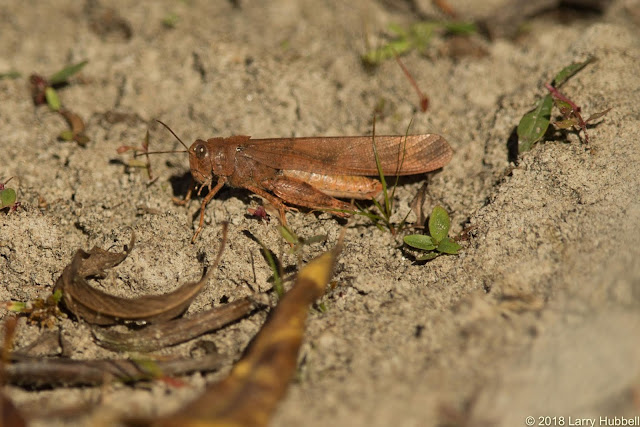 What species are these hoppers? Are they native to Union Bay?

Scroll down for my thoughts

I know next to nothing about grasshoppers. This week, I am certainly looking for expert guidance. The best I was able to come up with is that A) looks like a true grasshopper and B) looks more like a locust. For comparison I looked at this Insect Identification Guide.

Posted by Larry Hubbell at 1:32 PM