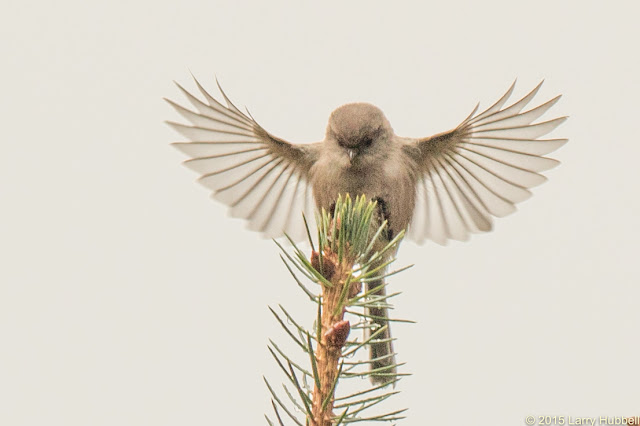 This is one of my favorite Bushtit photos from 2015. These little birds have a wingspan of approximately six inches and their fully grown tail feathers must be nearly two inches in length. 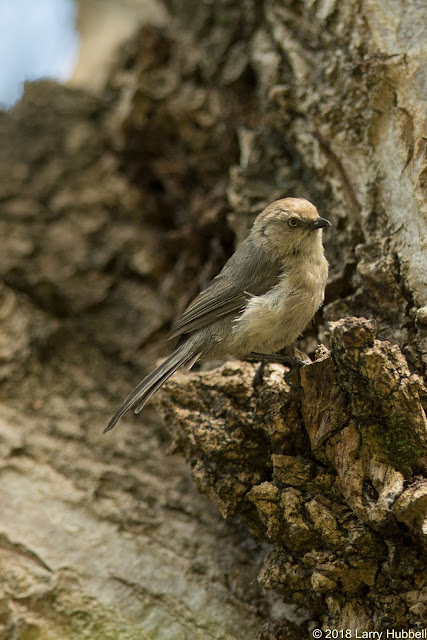 This week when I spotted a small flock of Bushtits just south of Portage Bay, they reminded me of some earlier photos. Bushtits are the only North American member of the Long-tailed Tit family - Aegithalidae. In the Fall and Winter, Bushtits begin growing fresh feathers which can be subtlety darker and less faded than their previous plumage. 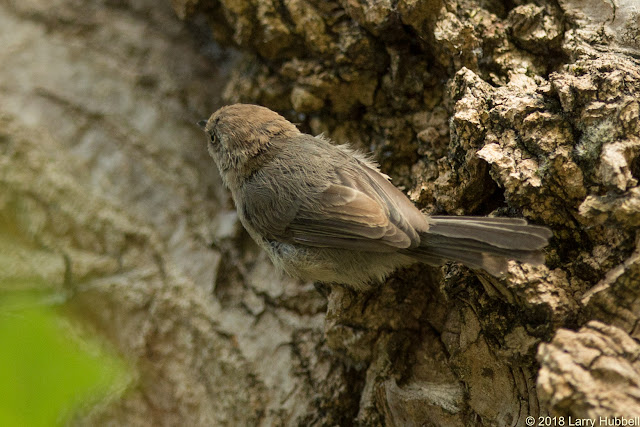 When viewing this bird from the back it seemed surprisingly dark for a Bushtit. It makes sense that new Fall feathers would be in better shape than those which have exposed to the wear and tear of Summer and Spring. 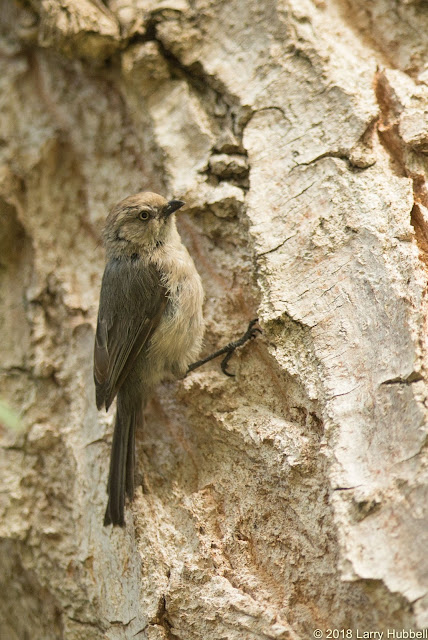 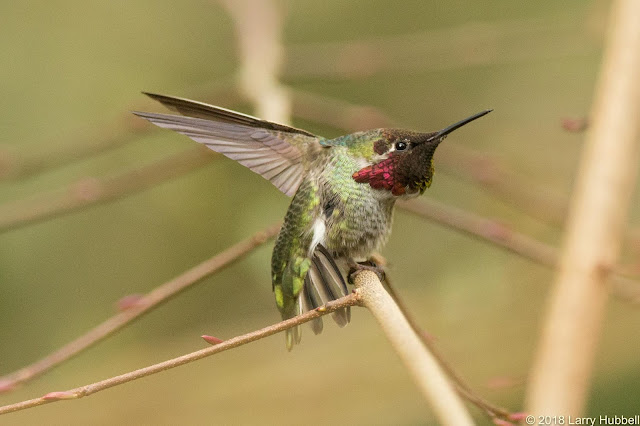 By comparison, an Anna's Hummingbird with a nearly identical weight, has short legs and tiny little feet.

The two species also have strikingly different bills, which fits with their food preferences. I suspect the ratio of animal matter to plant matter consumed is significantly higher with Bushtits. 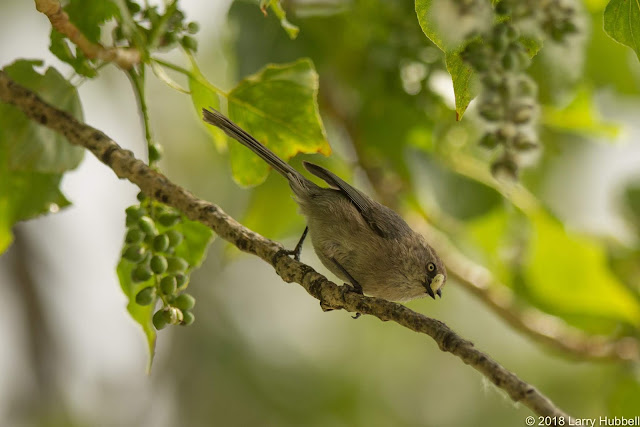 In May I noticed this Bushtit with a single white worm, which it gleaned from a unique tree on the northwest side of Montlake Cut. A single worm could be a mini-meal for the individual bird. However... 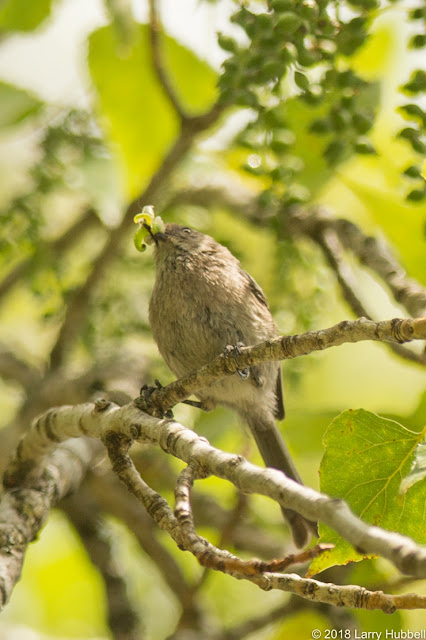 ... a beak full of worms makes it obvious, that this bird was collecting food to return to the young in the nest. 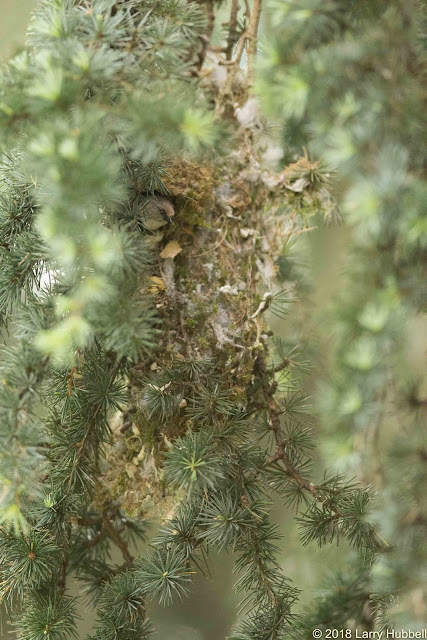 Lucky for me, my friend Whitney pointed out the nearby nest. It was hidden in plain sight right above a frequently used walkway. I could have easily missed it. Once I had both the nest and food source in mind it became much easier to observe the living 'conveyor-belt' of food being delivered to the young in the nest.

All About Birds states that the Bushtit incubation period is just less than two weeks. It takes another 18 days before the young are ready to leave the nest and fledge. 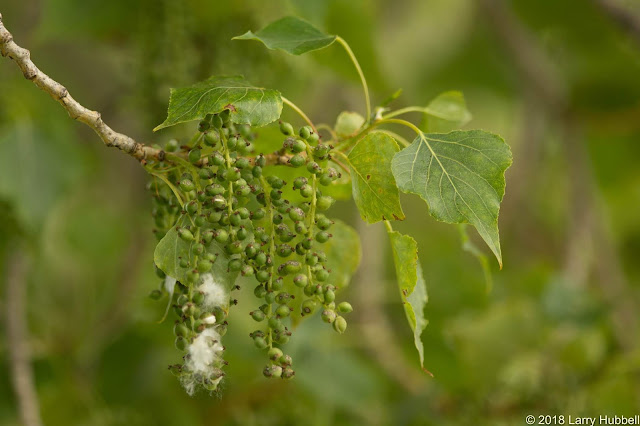 I found it interesting that the tree where the birds were finding the worms, had leaves similar to the trees around it. However, this particular tree was a bit different than its neighbors. It was broader and it had this fruit which the others did not. I suspect the tree in question is a locally-rare, female version of the Lombardy Poplar which Arthur Lee Jacobson mentions on page 293 of his book, 'Trees of Seattle'. 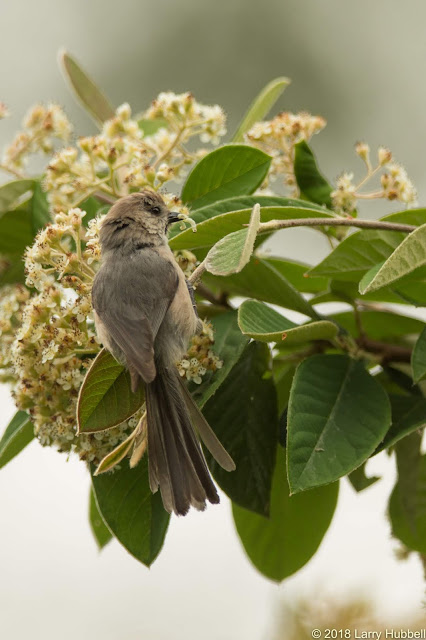 In late June on the south-side of The Cut, I saw a small flock of Bushtits involved in a similar food gathering process. By the way, you might want to notice the two somewhat shorter, outer tail feathers. I believe, the varied lengths of the rectrices, or tail feathers, is an obvious sign of molting and new feather growth. 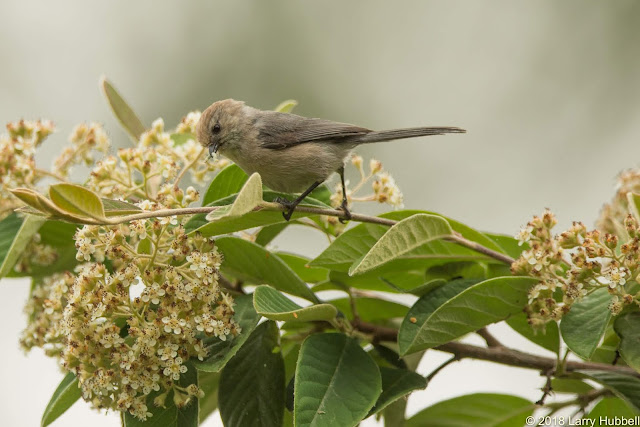 This bird appears to be a male, because it has totally black irises. 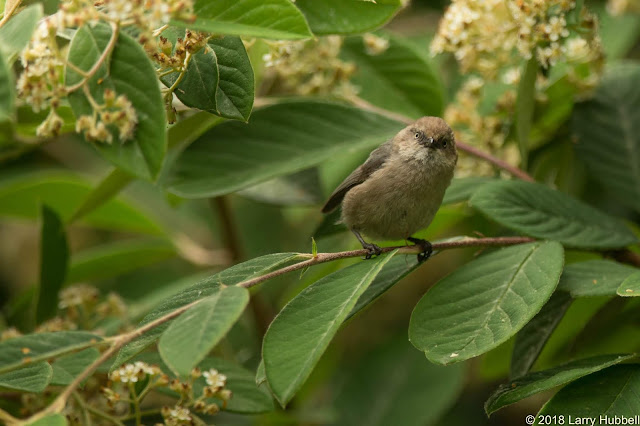 Suddenly, my eyes were drawn to a surprisingly odd looking female Bushtit. 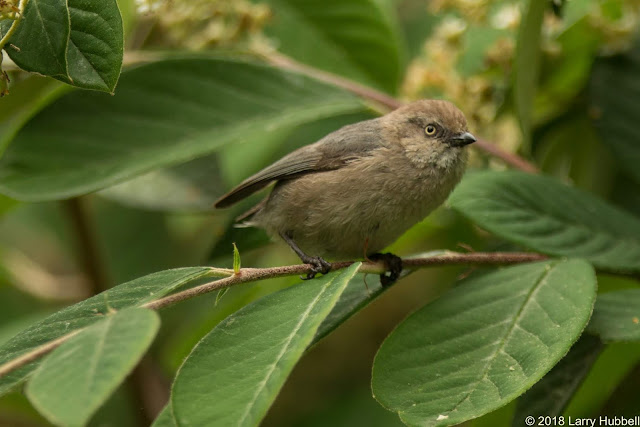 The bird's tail was almost totally missing. The two dark projections at the rear of the bird are her wingtips. 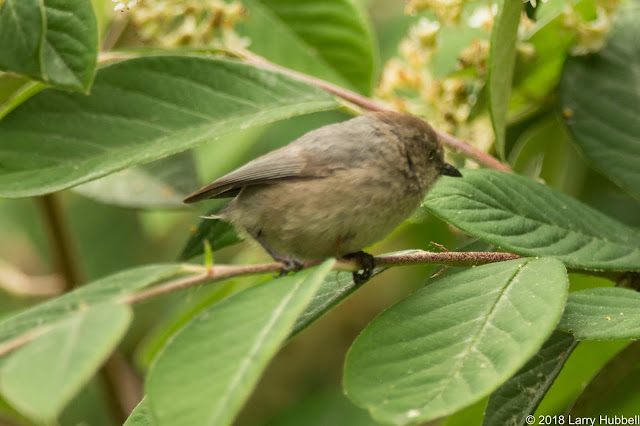 As she turned further there might have been the barest hint of a tail feather, and a nice profile of a fully-developed bill. My first thought was to wonder if the bird might be a young Bushtit whose tail was just starting to grow.

I did not suspect it was an adult because, as we saw in the earlier photo, they do not lose all of their tail feathers when they molt. In order to keep a functioning tail they apparently lose and replace their rectrices in sets of two. 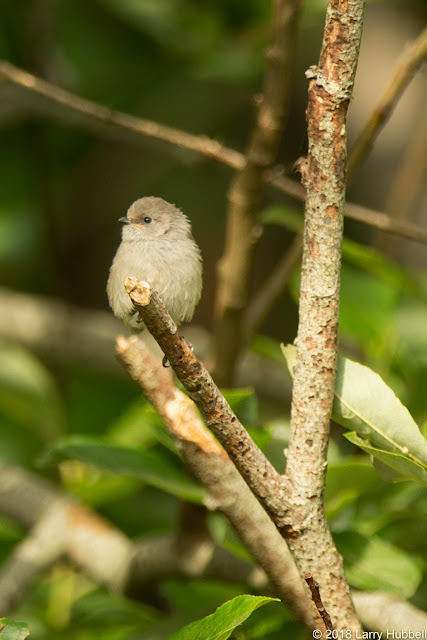 As I reviewed my 2018 Bushtit photos, I found this photo taken a week earlier near Port Townsend. The small size of the Bushtit's bill and the uniformly clean and tidy look of the feathers made me think this was truly a young bird, fresh out of the nest. 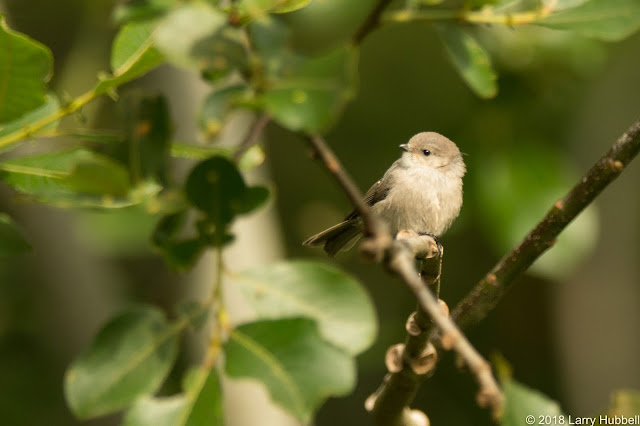 However, even though the bird's bill is relatively small, its tail is already of significant size and easily noticeable. 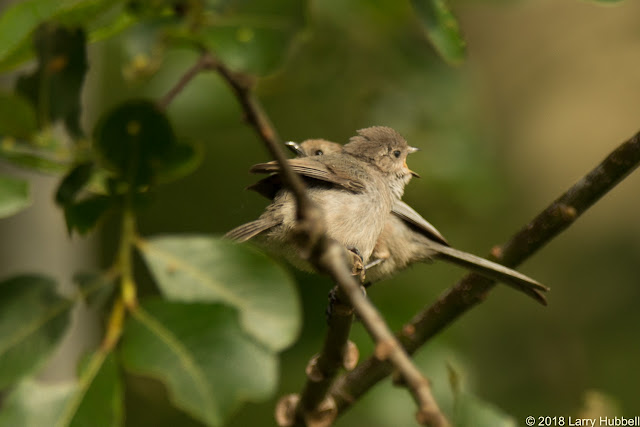 When an adult landed beside it, the young bird appeared to be begging for food. 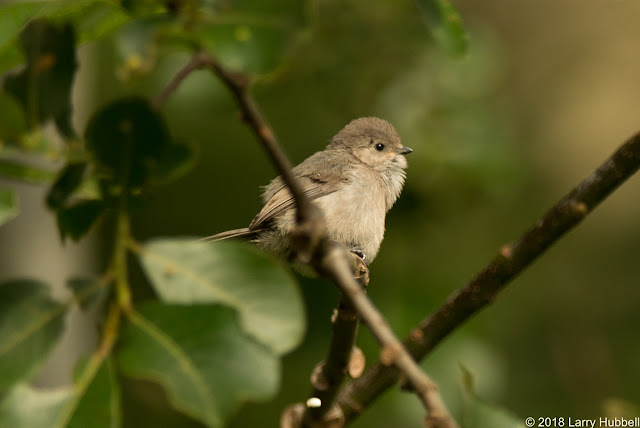 As I was reading through the Bushtit section of *Birds of North America, I learned that when Bushtits fledge, both genders have dark irises. The females do not develop their light-colored irises until a month after fledging. This combination of information convinced me that the tail-less Bushtit was old enough that under normal circumstances it should have had a tail.

The next idea which came to mind was that the Bushtit may have had a close encounter with a predatory bird. I have seen Merlins, Sharp-shinned Hawks and Cooper's Hawks in the area just south of Montlake Cut. Plus, American Crows and Steller's Jays might go after the eggs in a Bushtit nest. Maybe one of these was tearing into a Bushtit nest  when it ended up with a mouth full of the incubating female's tail feathers. 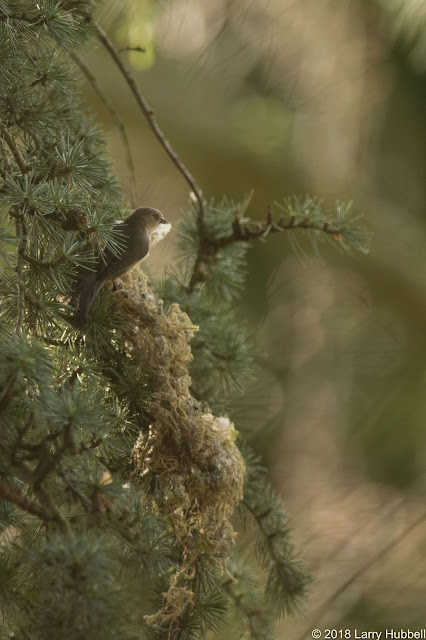 It may be possible I saw the scene of the crime. Earlier in the Spring, I watched a group of Bushtits working around another nearby nest. A first I was excited that they might be building a new nest. 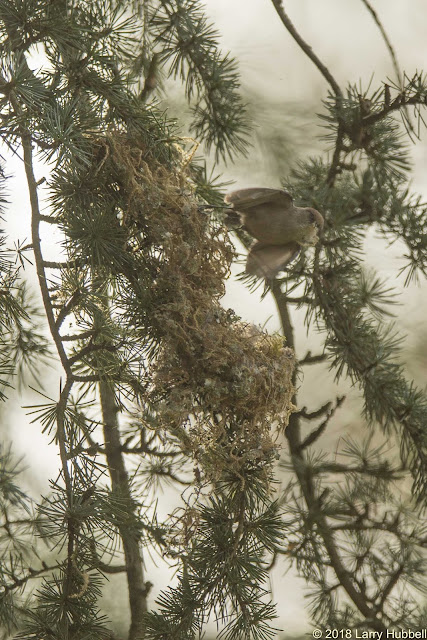 It was only when I saw them flying away with nesting material that I realized they were involved in a recycling effort and rebuilding the nest elsewhere. I wonder if this might have been the site where the female lost her tail.

I am sure there could be other explanations for the missing tail. For example, Could the Bushtit have been hatched without a tail? The mystery continues. 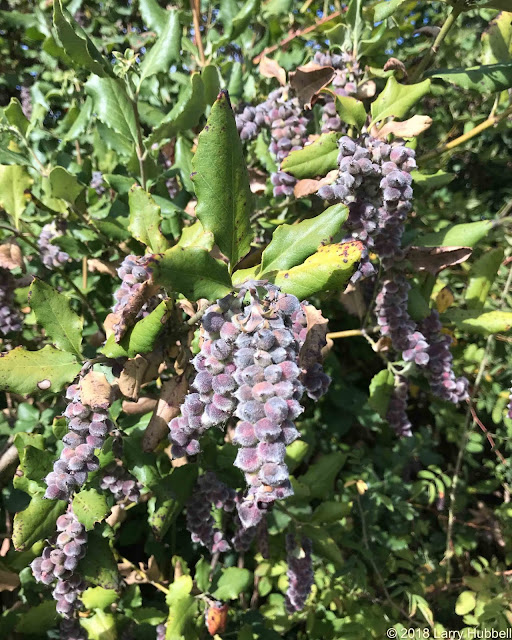 What is the name of this bush? Is it native to Union Bay?

This plant is not native to Union Bay. It is native to Southern Oregon and California. With climate change, I wonder if our grandchildren will ultimately have to replace our locally native plants with more drought-tolerant flora from places like California.

Thank You - to Eric for identifying this unique bush - spotted near Portage Bay.