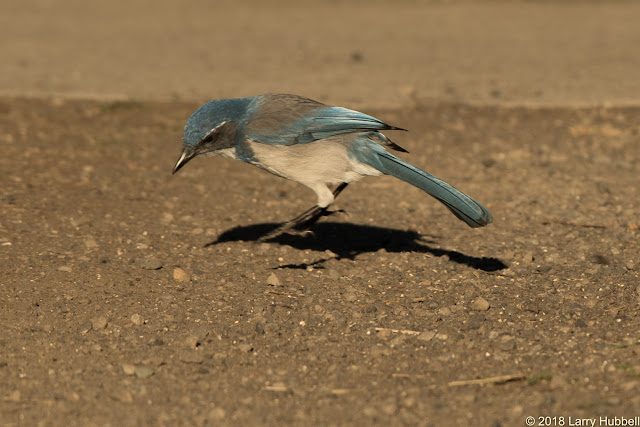 A California Scrub-Jay near Salmon Creek in Vancouver Washington.

I like this photo because it catches the bird in what I call a corvid hop. At first glance one might think the bird is standing on the ground. A careful examination of the shadow causes a mental re-adjustment. Suddenly, the bird appears airborne, without the use of wings. Our local American Crows and Steller's Jays do a similar maneuver as this their corvid cousin - the California Scrub-Jay.

I have been hoping to photograph a Scrub-Jay near Union Bay for quite some time. Earlier this year, my friend Whitney saw a group of them near Agua Verde. They were gone by the time I visited the area. Scrub-Jays are more common further to the south but occasionally a few wander north.

Earlier this month, my friend Dave Galvin heard a California Scrub-Jay as he biked through Montlake. The next morning, I visited the specific area but sadly I saw only Steller's Jays.

The same day, I joined my friend Eric's bird walk near Portage Bay. In part, because I wanted to ask Eric if he had seen any Scrub Jays lately. He pointed out a tree where he observed one the day before, but none appeared for me.

This week, while visiting my mother in Vancouver I finally secured a few photos. Vancouver is inside the normal range for California Scrub-Jays so finding them was not too challenging, however it did not really satisfy my desire to see them near Union Bay. 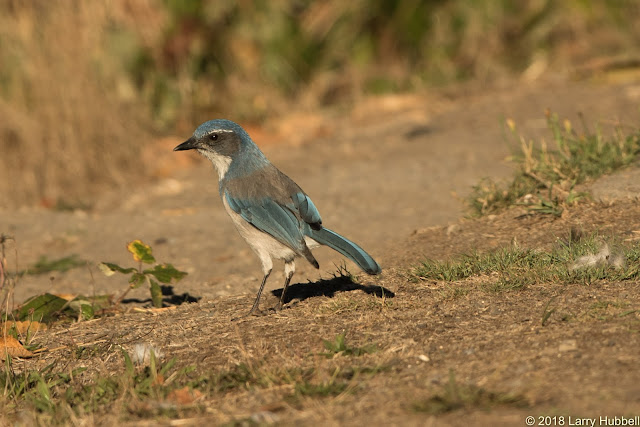 The beauty of this jay is an excellent reward for those who spot one. I am always amazed by the hues and colors of blue birds, especially since their feathers do not have any internal blue coloring. It is the physical structure of the feather which causes it to reflect light in the blue wave length.

This makes me wonder if a scientist were to crush a blue feather, destroying the internal structure, what would be the color of the resulting powder? Would it be grey like the cheeks or the back of the jay or a shade of white like the belly or bib or some other completely unexpected color? 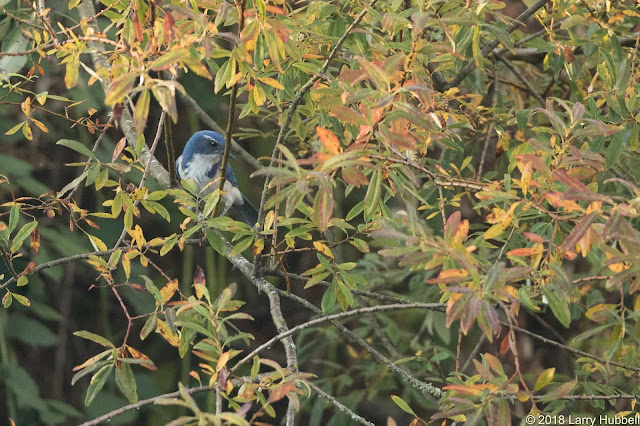 In this photo, taken with out direct sunlight, why does the blue color appear richer? If blue is a reflection of the light why would less light seem to create more color? 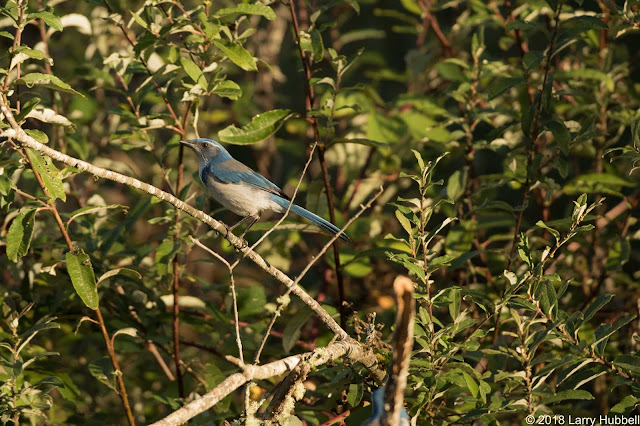 For comparison, here is a bird in a similar situation, except for the addition of direct sunlight. 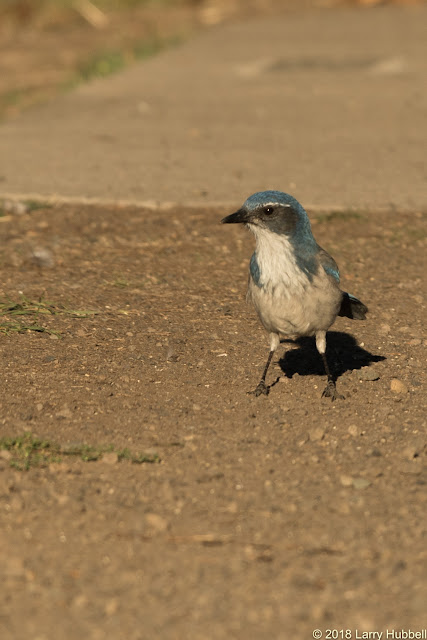 I wonder if the bright white of the bib and the supercilium and the off-white of the belly are structurally different from the blue feathers or do the whitish feathers contain white pigmentation. 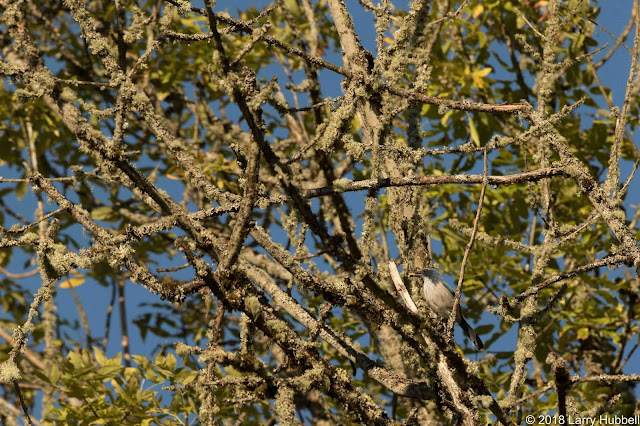 It is also interesting how the coloring of the Scrub-Jay helps it to disappear in into a busy, broken background. From my limited experience it does appear that Scrub Jays spend more time in smaller bushes than the Steller's Jays or Crows which I watch around Union Bay. 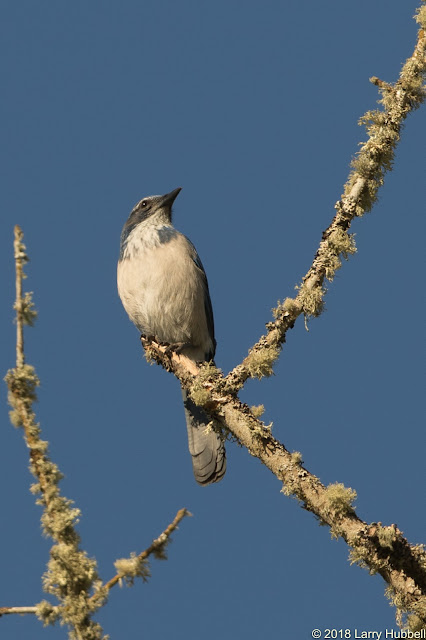 They also spend time in the tree tops. Against a clear blue sky a Scrub Jay certainly looks elegant. I was surprised to notice that the tail feathers which are blue on the topside are grey underneath. 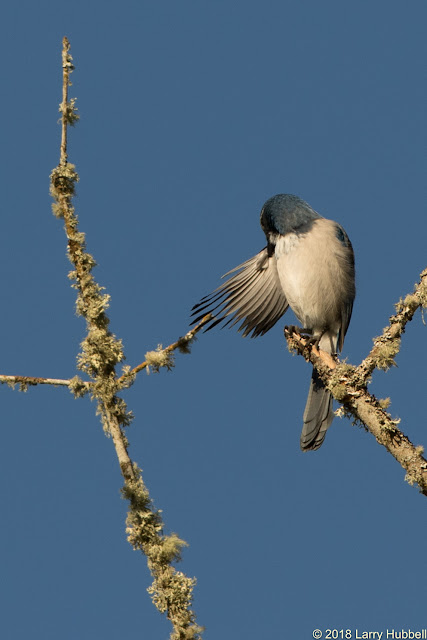 The feathers of the wings are also blue on the upper surface. In this case as well, the undersides of the feathers seem to grow a darker grey as the distance from the body increases. 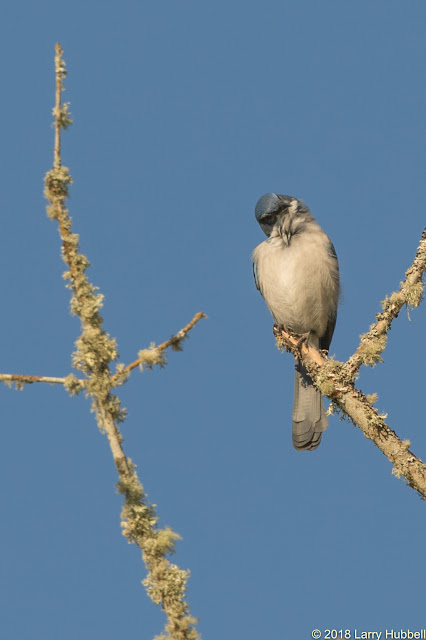 All birds can get in surprisingly awkward positions while preening their feathers. 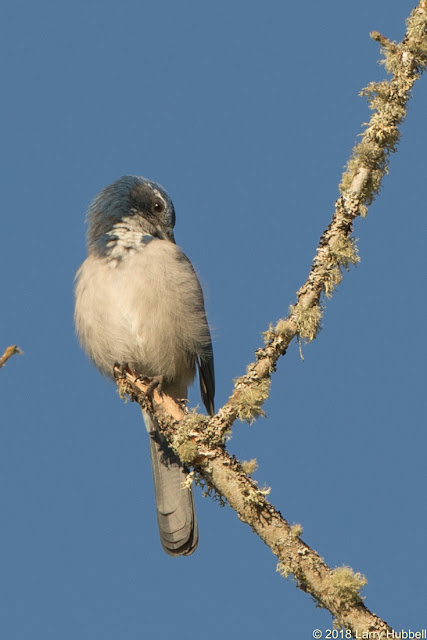 The miracle of flight requires minimal air resistance which is in part achieved with well groomed and aligned feathers. 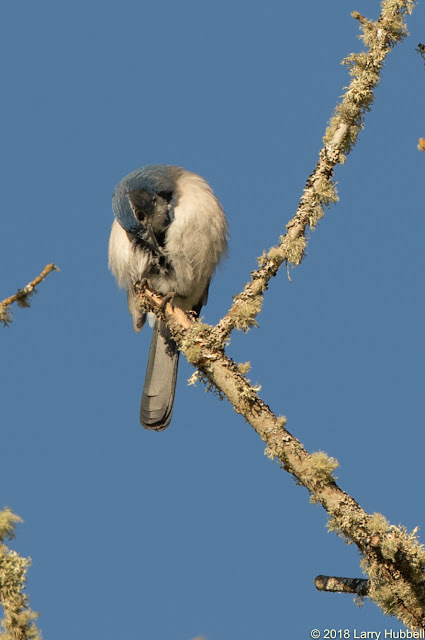 I am sure clean feathers are also lighter which helps to increase a bird's endurance and range. 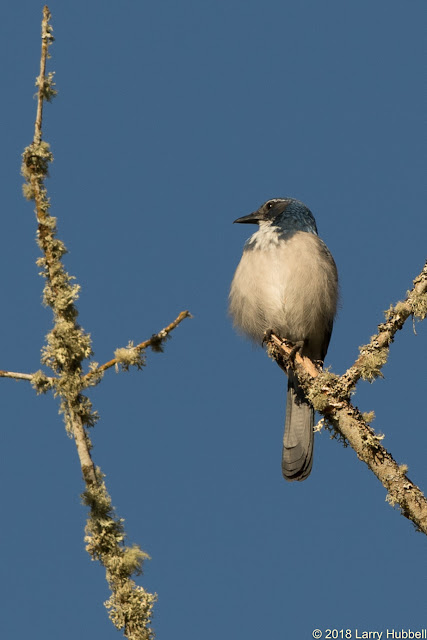 I am at a loss to explain why we still call such a beautiful bird a Scrub-Jay.

In my experience the term scrub is a derogatory term. In the sawmill towns where I grew up scrub was used to describe bushes which were considered too small to harvest for lumber and which were therefore consider worthless. In fact small bushes are actually a critical habitat for birds and other wild creatures. Along a similar line, in sports the term scrub is used to describe strike-breaking substitutes which are considered to be worth less than the more skilled athletes which they temporarily replace.

Currently, the Scrub-Jay species found in California, Oregon and Washington is called the California Scrub-Jay. It is one of four species which previously were combined into a single group called the Western Scrub-Jay. Even though this bird often spends time in smaller shrubs and undergrowth I believe it has other attributes which deserve to be highlighted via its name.

For example, California Scrub-Jays can also be found in oak woodlands. (Woodlands which are in need of protection. Click Here for more information.) In this habitat they utilize their incredible memory to distribute, store and retrieve acorns from a wide variety of locations. Without this amazing capacity these birds would be unable to survive the winter. Certainly, a name reflecting this mental acuity around oaks and acorns would more properly reflect their skills and abilities.

If I was lucky enough to name this bird I might call it the 'Blue-Grey Acorn Jay". 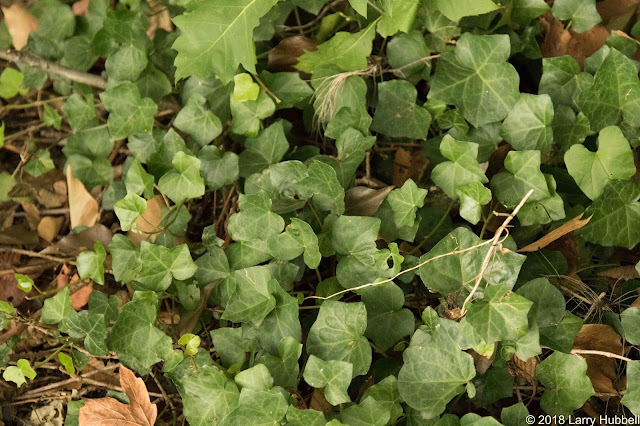 This week I am taking a slightly different approach. My friend and photographic mentor, Laurence Norton, sent me a link from King County which suggests native replacements for English Ivy. I hope you find This Link as interesting (and useful) as I did!

Posted by Larry Hubbell at 2:24 PM