A Moment In Time 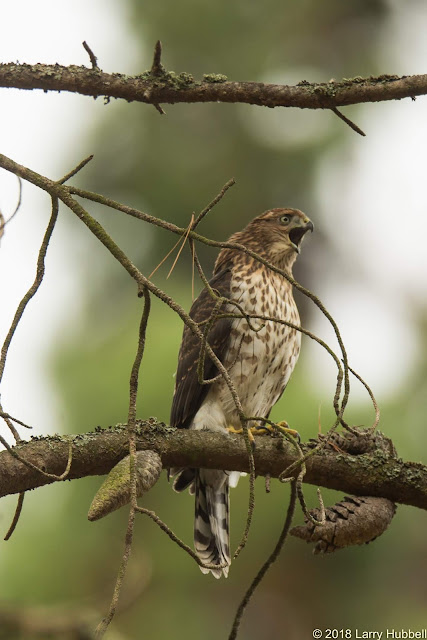 When the smoke began to lift, one of the first birds I saw this week was a young Cooper's Hawk. I heard it first. The repeated calls seemed to bounce from one location to the next. I twisted and turned trying to find the source of the sound. It is possible that I was hearing multiple siblings begging all around me. I wandered in circles visually searching the pines and the sequoias trying to pinpoint the sounds.

Due to the persistent and repetitive begging, I assumed the hawks I heard were young. Each of the high-pitched 'keee' calls seemed to explode before fading in both pitch and volume. When one of the young birds finally landed in front of me, the vertical brown teardrops on its breast confirmed its youth, while the varied length of the tail feathers confirmed it was a Cooper's Hawk. 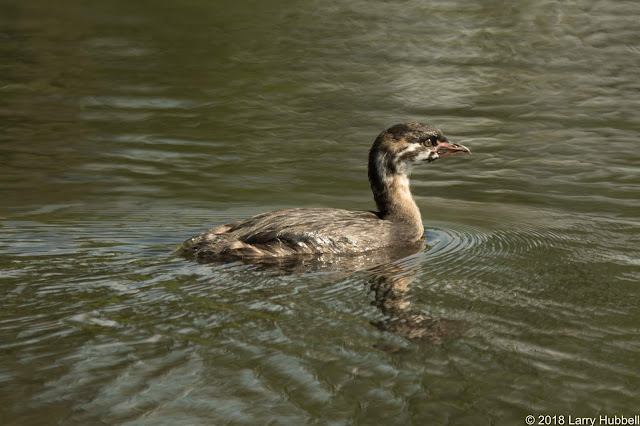 On multiple days this week, I also saw a young Pied-billed Grebe. I suspect I have been watching the same one since I consistently saw it just to the west of Duck Bay. It floats around a lot and occasionally dives. Mostly it seems to wait and watch for its mother to pop up with food. The black and white cheek and the pink hue on its bill are indicative of its youth. 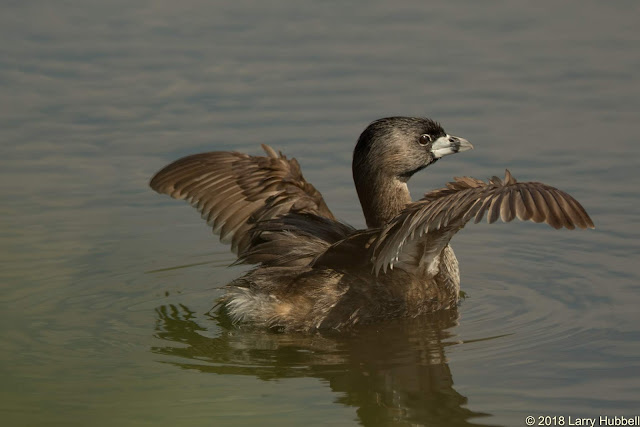 The two-toned, 'pied-bill' of the adults is what gives this species its name. It is interesting how the adult and the juvenile share a similar shape while their facial coloring is quite different. 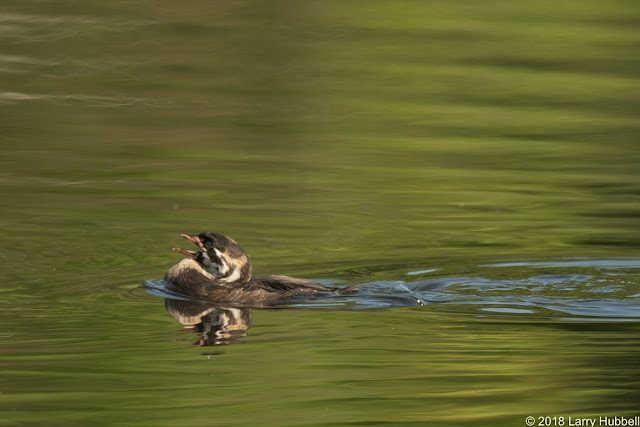 When the young bird sees a parent surface it immediately lowers its head, opens its mouth and does its best imitation of a starving, young hatchling. 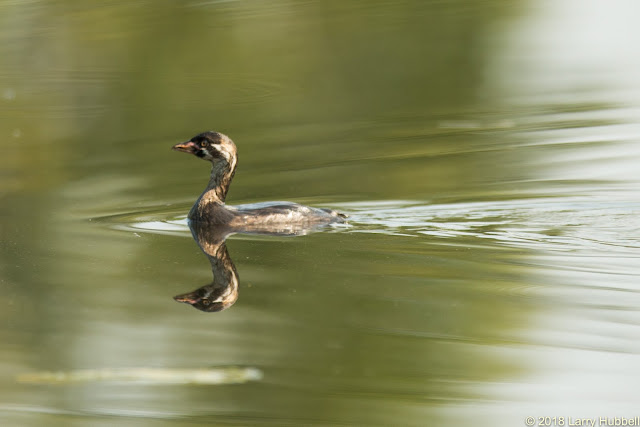 When the mother dives it resumes a more dignified pose. 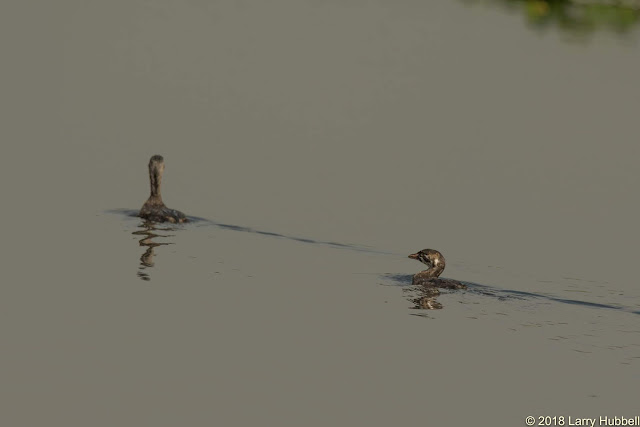 When the adult resurfaces, the young one shrinks again and promptly gives chase. 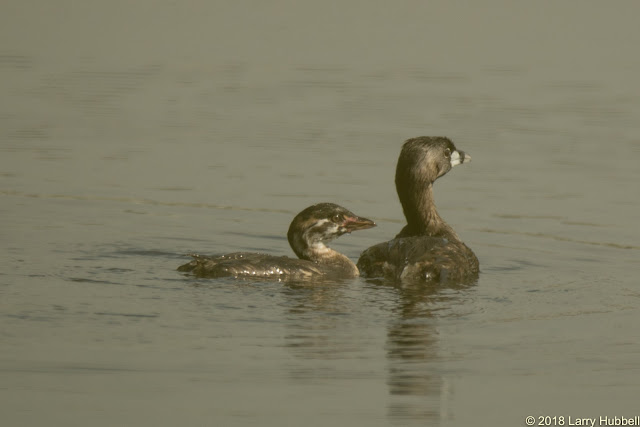 I wonder if the mother is counting the days until this one learns to find food. Finding enough food for both of them must be quite a challenge. 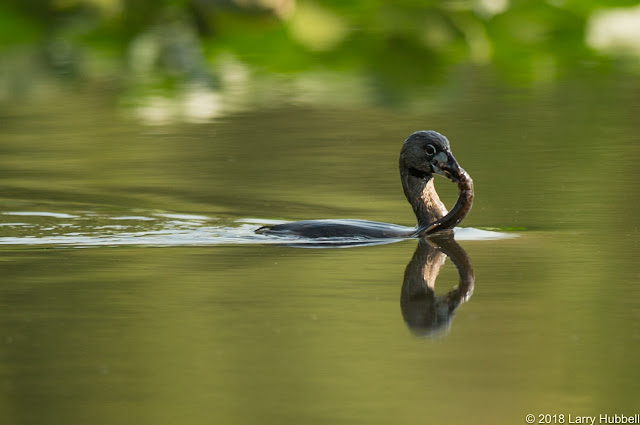 When the patient parent captures food, she keeps it alive while she wanders about searching for her hungry, young offspring. In the past, I have watched parents recapture the same fish multiple times, while the young fumble about and slowly learn to handle live food. 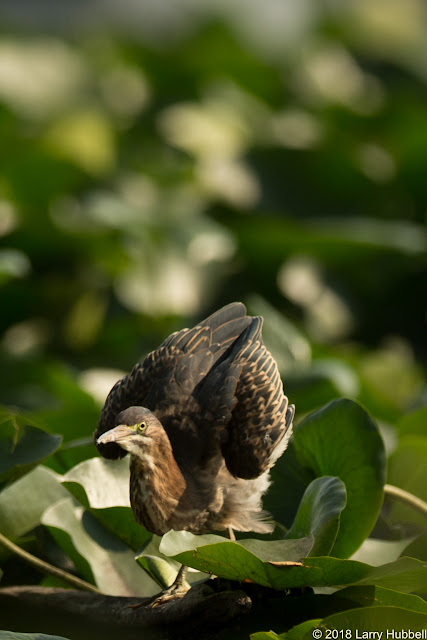 The next day I spotted a young Green Heron to the west of Foster Island. The mottled stripes on the sides of the neck and the small white triangles on the tips of the wing feathers indicate this heron is in its first year. 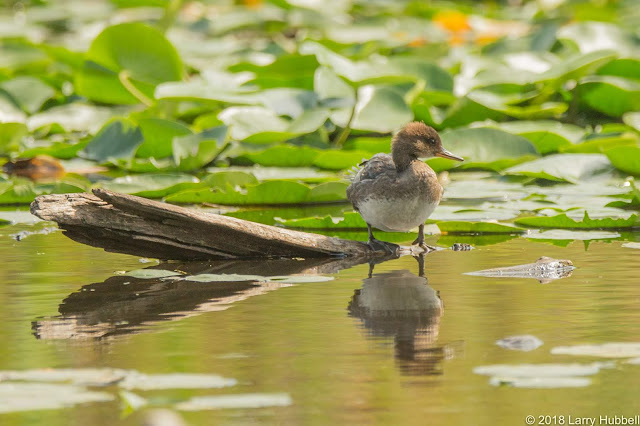 Yesterday, to east of Foster Island I saw what I believe is a young Hooded Merganser. This was the first time I remember seeing a Hooded Merganser - without a hood. While I was focusing on this bird I heard a very loud 'Pha-Phoom'. Something hit the water between us.

I jumped, lowered my camera and looked up as an Osprey disappeared to the south. I had seen a single Osprey in the distance the day before and I wondered if it might be one of the two adults from the nest in the Union Bay Natural Area (UBNA). Sadly, I knew it was not either of this year's young, since neither survived. Maybe next year.

When I headed south, in the direction which the Osprey flew, I caught one more glimpse of it as it turned and headed north. I decided my best bet was to hike to the north end of the island and try to catch sight of the Osprey, since I often see them circling around Union Bay. When I got there the bay seemed empty, no birds as far as I could see. I turned to head home. As I walked I thought, What if the Osprey had been sitting in the tree above my head when it dived? Maybe, when it headed north it simply returned to the same hunting roost. On my way home for lunch, I decided to stop and take one more look. As I crept quietly back to the same location, I searched through the thicket of Red Alder branches and leaves. 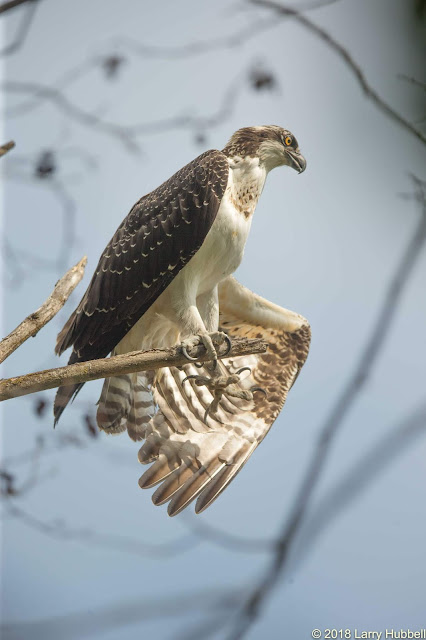 To my pleasant surprise, there was the Osprey. The white edging on its dark feathers and the hint of orange irises told me it was a juvenile. The light coloring of its feet also seemed unusually pristine. I suspect that with use and the passage of time osprey feet slowly fade to a dirty gray-brown. 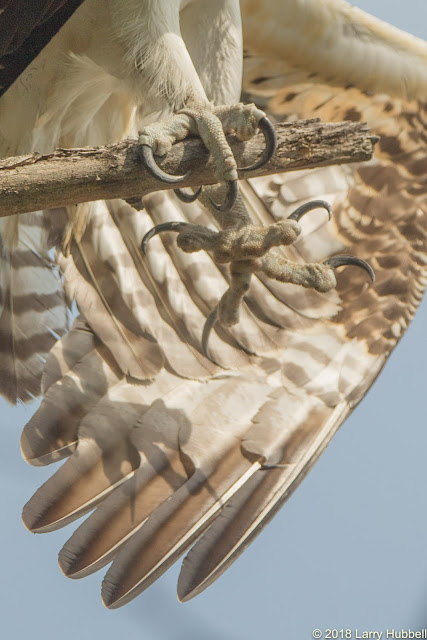 When the young bird stretched its leg it was fun to see how the sharp, curving talons divided into two opposing groups. This adaption helps them to catch and hold onto the fish they love. 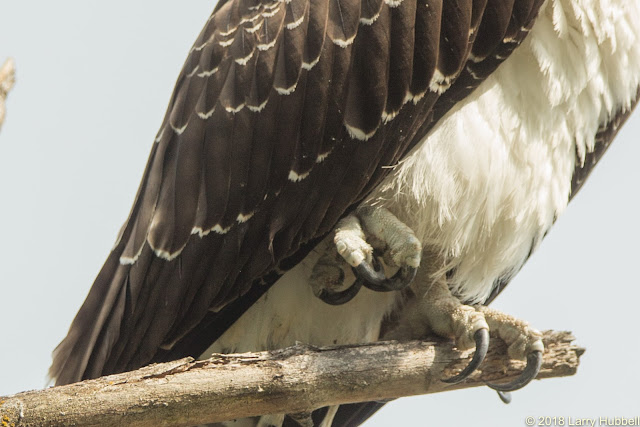 It was also interesting to watch how the talons contracted into a harmless little ball before being tucked away next to the bird's belly. 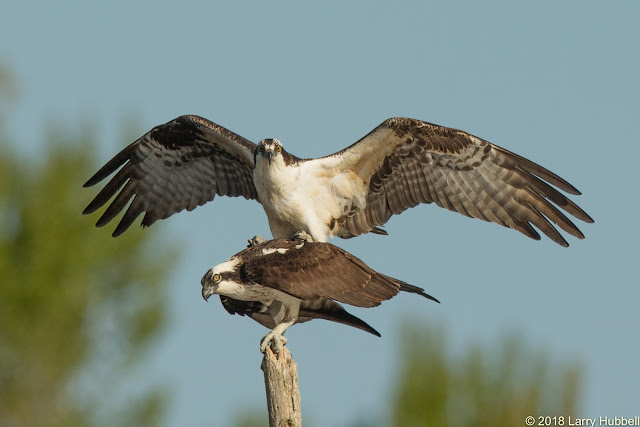 In this photo from Spring we can see how the male balled-up his talons to protect the female's back. This photo also shows us how the dark feathers of an adult, most obvious on the side of the female, lack the white tips which we saw on the young osprey in the previous photo. 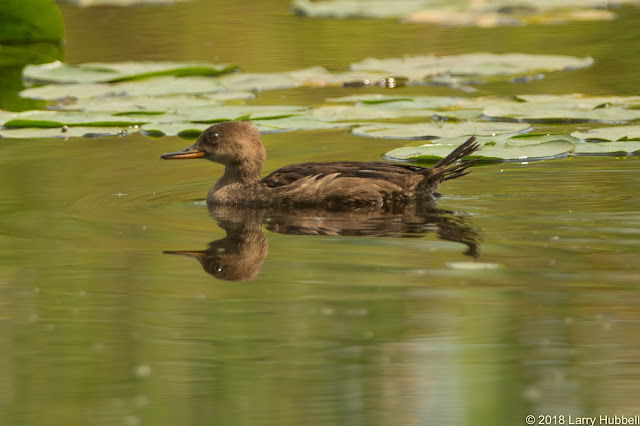 Meanwhile, the 'hoodless' merganser had stayed in the area. When it decided to slowly paddle away, it tilted its head to keep a watchful eye on the Osprey sitting overhead. 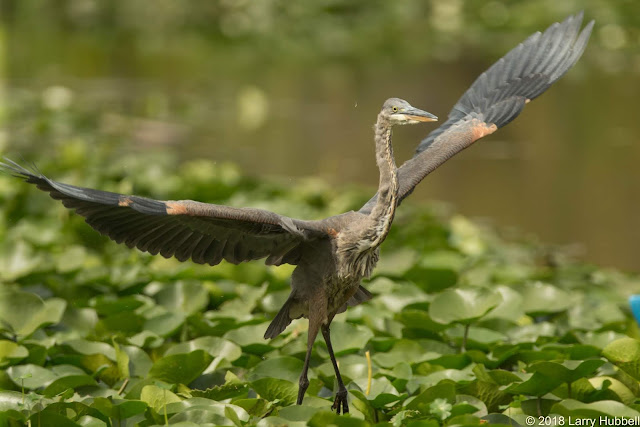 Later when I passed by Duck Bay, I could not miss this young Great Blue Heron flying about. In this case, the gray top to the head indicates its youth. Not to mention its almost hyper-active hunting technique. Apparently the calm, patient hunting style of an adult is a skill which must be learned. 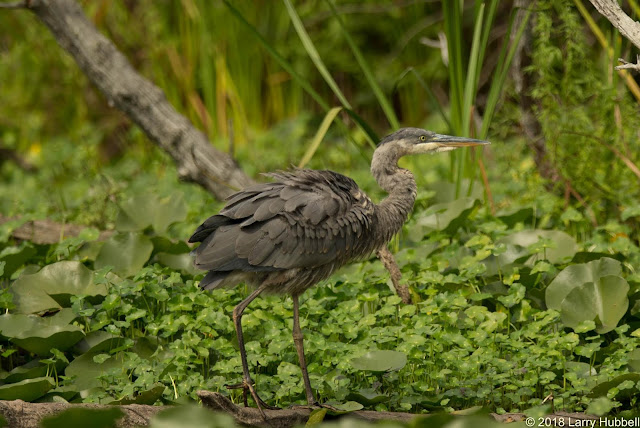 When the bird shivered and shook, its obviously short feathers reinforced my assessment of youth. 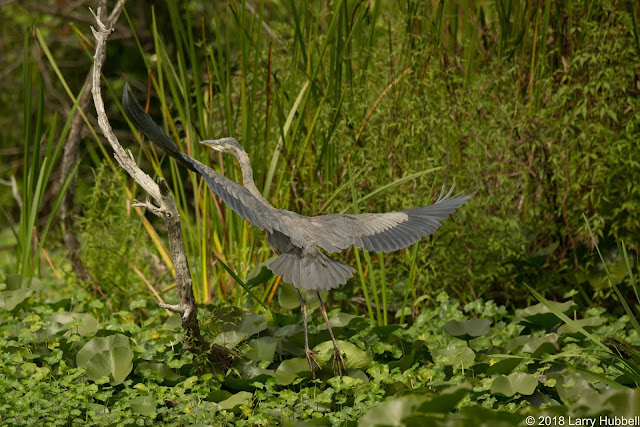 All of these young birds are in a race with the calendar. The Cooper's Hawk and the Pied-billed Grebe are still getting food from their parents, but the parent's level of devotion and effort is not sustainable. With Fall fast approaching, all of these first-year birds must learn to become self-sufficient.

For months, their parents have been working towards this moment in time. In Winter and early Spring the parents worked to attract and retain mates. They built nests and defended territories. They laid eggs, incubated and protected them. In all of these cases, except for the precocious merganser, the parents have supplied a nearly endless buffet of food for their young. In general, the parents have helped the young to find food and demonstrated the foraging process. Just like us, this new generation of birds is facing a future which will be determined by how quickly they learn and how effectively they use their new skills.

The survival of these creatures may also hinge on the choices we make. Please take the time to research and learn about the candidates in this Fall's election. Their views regarding humanity and nature will be critical for the future. Click Here for what appears to be a calm and unbiased source regarding the candidates. Click Here to register to vote. 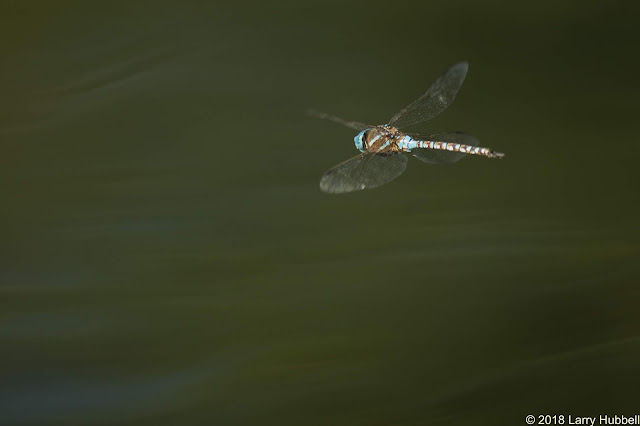 What species of dragonfly is this? Is it native to Union Bay?

Blue-eyed Darner: Yes, this dragonfly is native to Union Bay. Did you know that Dennis Paulson, who teaches the Master Birder Class for Seattle Audubon, is also a world-renown expert on dragonflies? Dennis' Field Key to Adult Washington Dragonflies is easily accessible by Clicking Here.