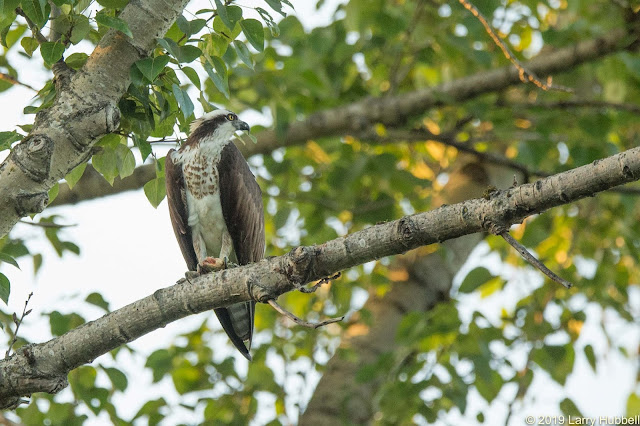 This is Hope. She and her mate, Stewart, successfully incubated, hatched out and raised one young osprey in 2019. We named it, Rama. This all took place in their nest just south of the QFC at University Village. Specifically, the nest is on the south side of 45th Street on top of the northern light pole above the intramural activities (IMA) soccer field. I suspect Rama was their first offspring. 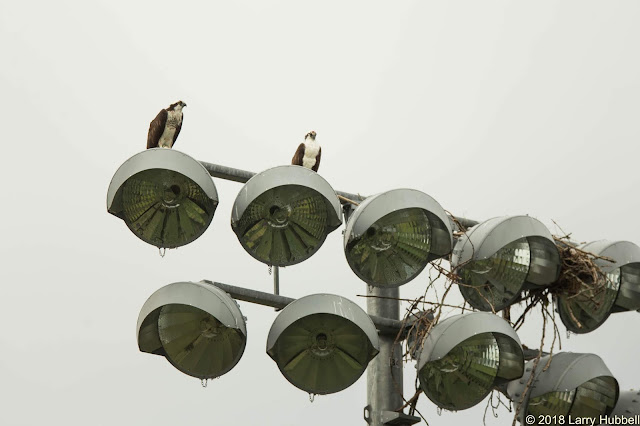 This belief is base on the fact that in 2018 they only half-finished their nest and they did not appear to do any actual egg-laying or incubating. Stewart is on the right. (Mature males generally have pure white chests.) 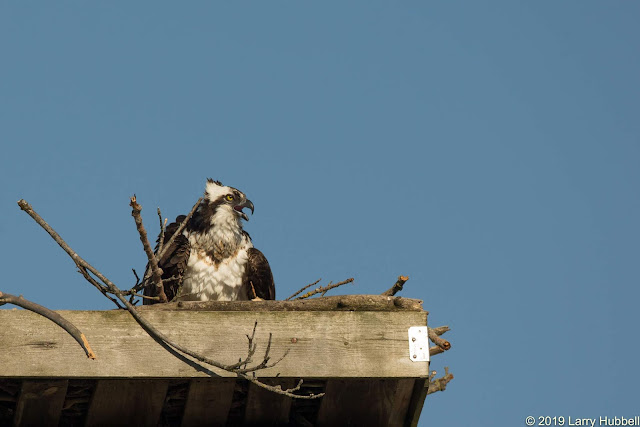 In 2019, about a quarter-mile to the south our older osprey pair, Chester and Lacey, appeared to be on course to lay eggs for the fourth year. Their nest is on the osprey platform at the Union Bay Natural Area (UBNA). This photo shows Lacey, the female of the pair at the nest site begging Chester for food in early May of 2019.

It is interesting to compare the faintly brown smudge of coloring on her chest with the crisp dark brown spots on Hope's chest (in the first photo above). The difference is distinctive. 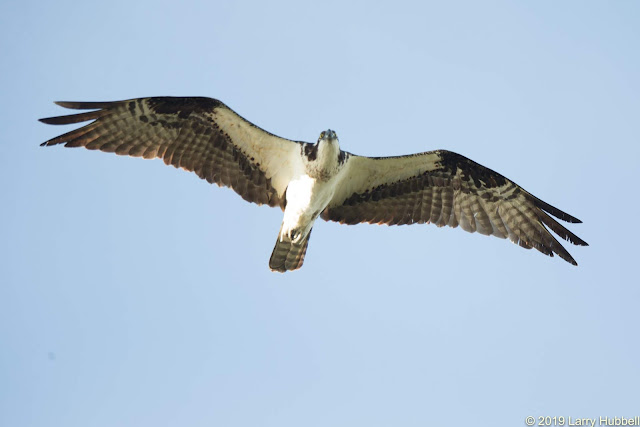 Sadly, Lacey did not settle on eggs in mid-May, as she has done in previous years. This might be related to the fact that in 2018 her young did not survive the summer.

So far, this photo, taken above the UW Baseball field in June of 2019, is my last photo of Lacey. I believe she apparently left the Union Bay area in mid-summer in 2019.

Chester seemed to hang around longer. However, in early fall, when the weather begins to turn cold, fish move to deeper water which makes it harder for osprey to catch them. So, the osprey fly south and generally do not return to our area until April of the following year. This leaves us with some major mysteries for 2020. 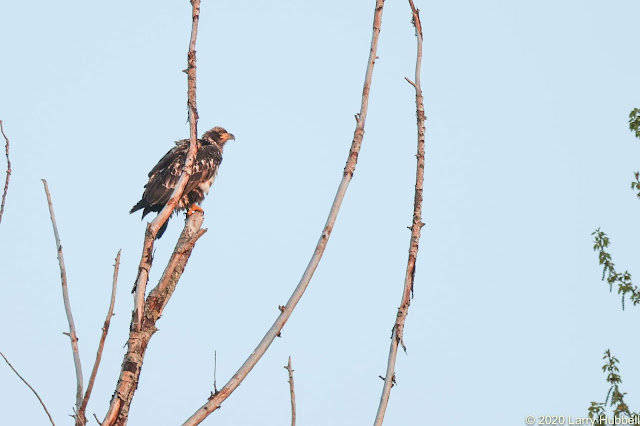 It may be a big advantage for Hope and Stewart that their nest site is not located near the Union Bay shore. Bald eagles love to hunt along the water's edge and they also enjoy being apex predators, which includes stealing fish from the osprey.

As a matter of fact, Friday morning, this immature Bald Eagle was in a tree just north of the UBNA osprey platform. In contrast, I do not ever remember seeing a bald eagle perched this close to Hope and Stewart's nest, even though it is fairly close.

Click Here to visit my Union Bay map that displays these nesting locations. The osprey nest sites are shown with yellow stars. 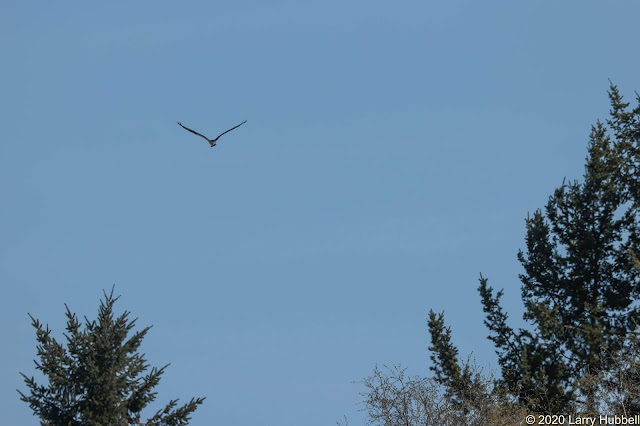 On April 8th, I saw my first osprey of 2020. It flew east above the UBNA. As my friend, Jeff later pointed out it was carrying a fish. I did not get a close look at the osprey. However, since it did not stop to feed near either of our two local nest sites, I suspect it did not belong to either of our established Union Bay pairs of osprey.

Last Sunday at dawn, I happened to stop within sight of the osprey platform at the UBNA. I watched a female dive into the water twice. The second time she came up with a fish. She flew north. I followed. She stopped and ate the fish on top of a light pole immediately southeast of Hope and Stewart's nest. This made me suspect she was Hope. Osprey have a high level of site fidelity. They may travel thousands of miles during migration but in the Spring the same two ospreys generally return to the exact same nest they used the year before. 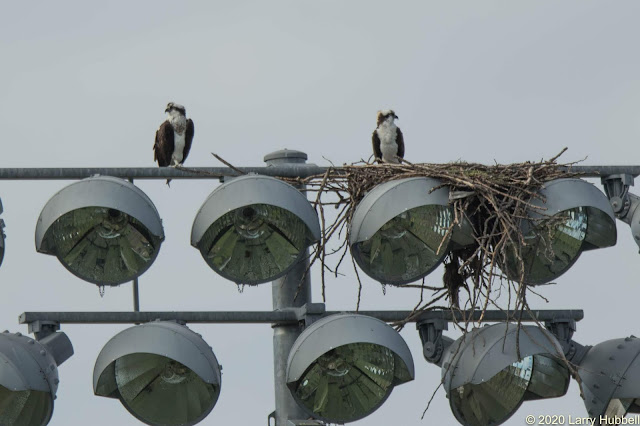 On Tuesday, for the first time this year, I photographed Hope and Stewart back at their nest, just south of QFC. I cannot be absolutely positive they are the same two ospreys, but their timely return to the same site increases my confidence. Plus, Hope's dark bib on her chest fits perfectly with her photos from previous years. 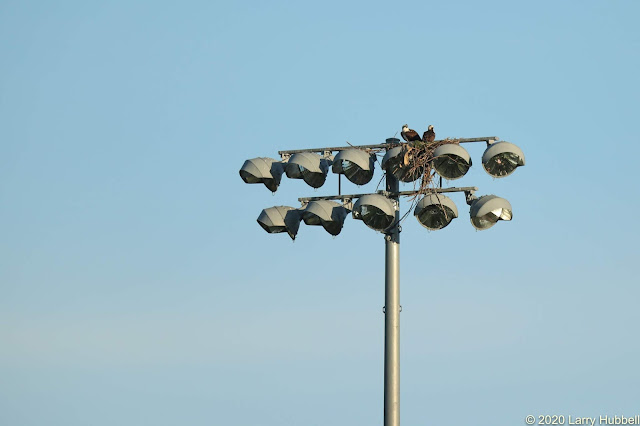 Friday morning, they were both still there. Sadly, with the field closure, my photo is rather distant. 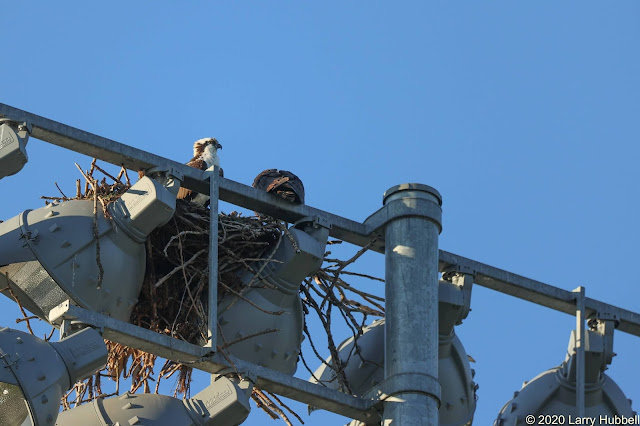 I finally decided to approach the nest from the sidewalk on the south side of 45th Street. The angle is not optimal but it was the best I could do.

As I watched a maintenance person drove up and stopped below the nest. He picked up an armful of sticks, loaded them into his vehicle and carried them away. I felt a little bad for the osprey. I was sad to see them drop so many sticks. I wondered if the removal of the sticks would make their nest rebuilding more challenging. However, they normally take dead branches from nearby treetops - instead of retrieving them from the ground.

(Afterwards, I learned that the maintenance person has been picking up an daily armload of sticks from below the nest.) 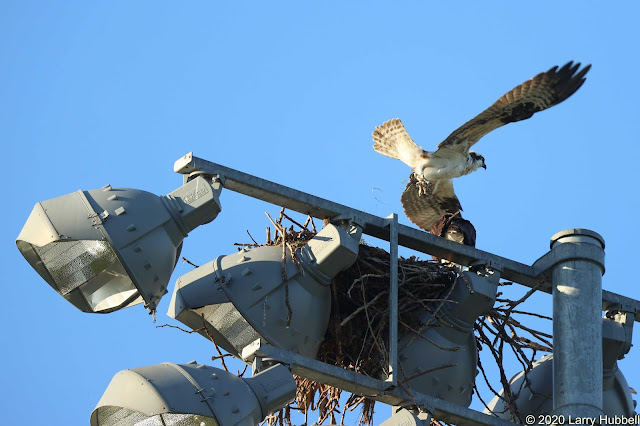 Almost immediately, Stewart lifted off from the nest. If you look closely you can see little pieces of grass falling away from his talons. I wonder if this pair is already bringing in soft nest-lining material. If the grass was leftover from last year I am thinking it should have decomposed by now. 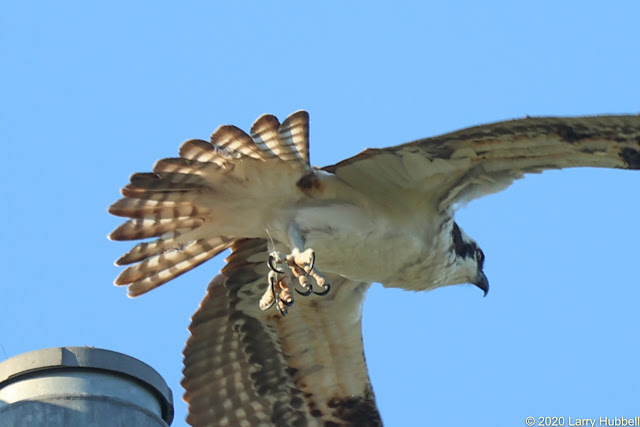 I could not resist zooming in on his talons to show how curved, sharp and perfectly adapted they are for catching fish. 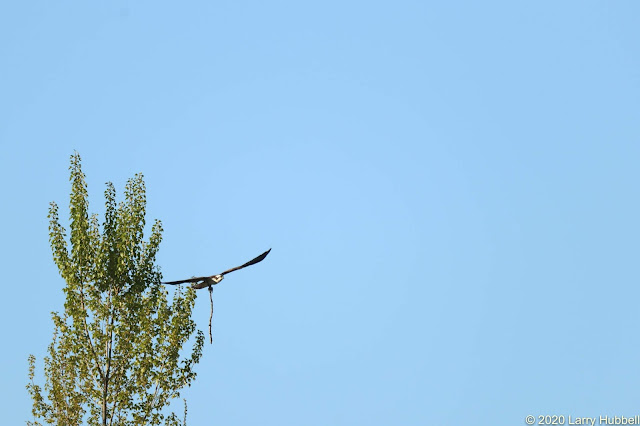 Stewart put my mind at ease. He hardly even slowed down as he broke a branch off the top of a nearby tree. 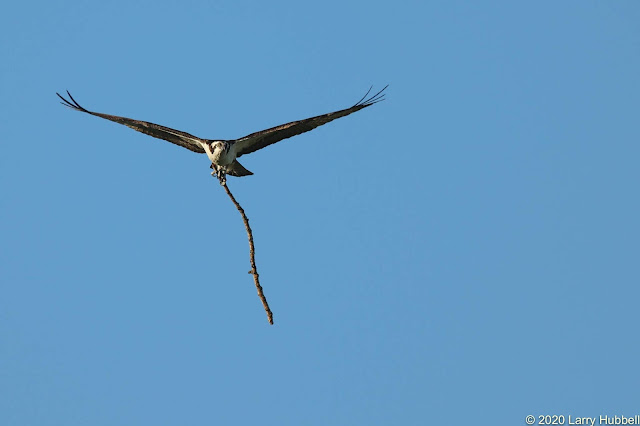 As he carried the stick back toward the nest my hope for their future steadily increased. 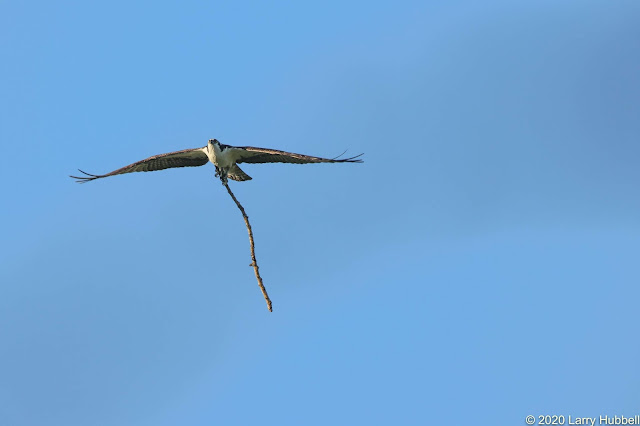 Emotions are funny things. Watching him approach the nest was like seeing a plan in action. Noticing how capable he is, observing his direct and purposeful approach made my hope grow. 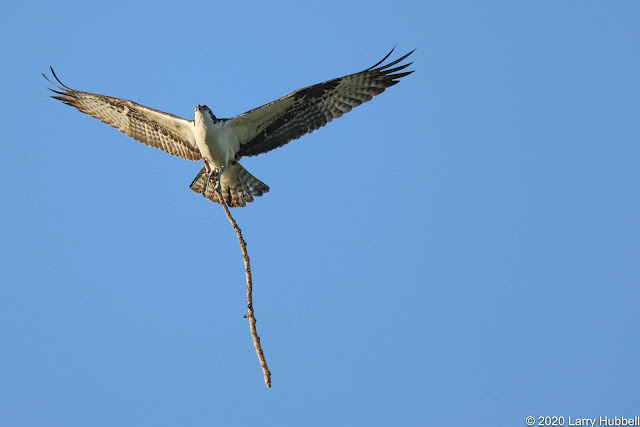 I breathed a sigh of relief as my concern for this pair of osprey diminished. My shoulders relaxed a bit and a smile crossed my face. 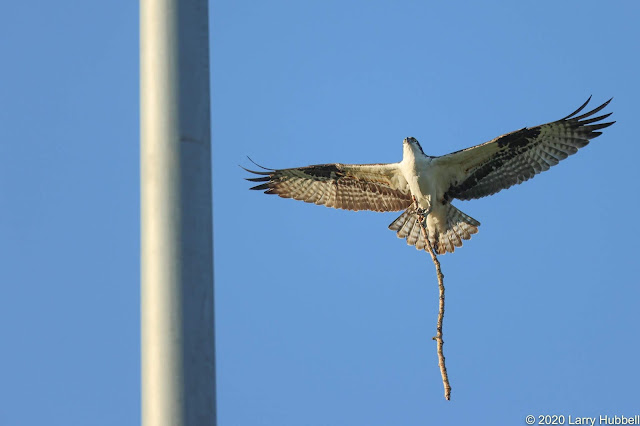 Without any effort on my part, my hope for their 2020 reproductive effort transformed into faith. 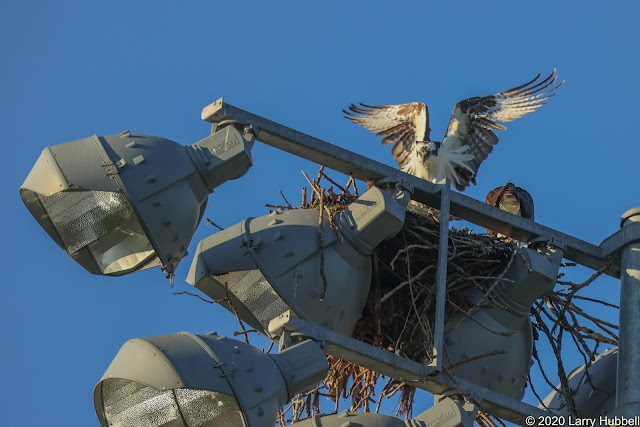 Barring any unforeseen circumstances, I believe they will successfully nest again this year.

On the other hand, I have seen no sign of Chester or Lacey. My hope for their nesting success continues to fade with each passing day. When and if they return, I would expect to see them resting in the trees north of the UBNA nesting platform, catching fish, eating on the light poles above the UW Baseball Facility (or in the trees), mating with each other and bringing sticks to the nesting platform.

Stewart and Hope might do a few of these things in the same area. However, the key is where do they go when they are done. Tentatively identifying osprey requires paying attention to their site fidelity. Where do they go to eat? Where do they sit when they are full? Do they bring sticks to a particular nest? Where are they sitting at the end of the day?

During the next couple of weeks, feel free to send me an email, with the time, location and activity, if you see any sign of Chester or Lacey near the UBNA nest site. 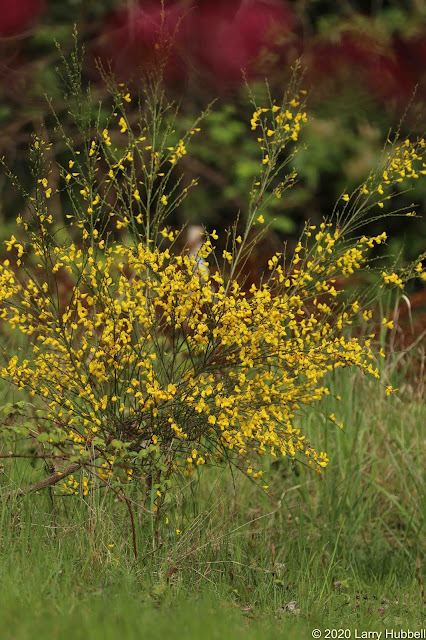 Scotch Broom: This invasive, stinky, non-native plant is on the Washington State plant quarantine list. Click on the highlighted name to learn more. 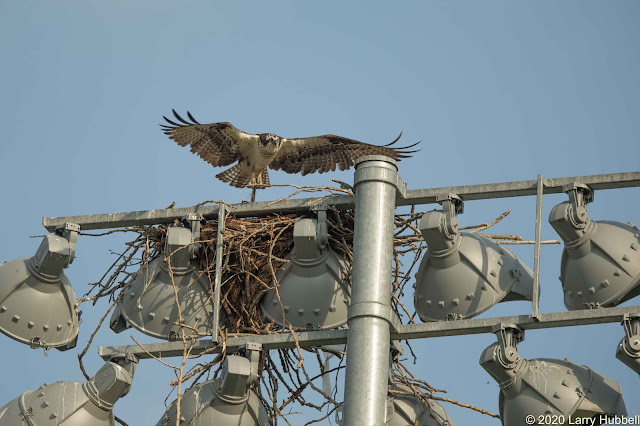 For those who read this far here is a photo of Hope at the nest in July of 2019.