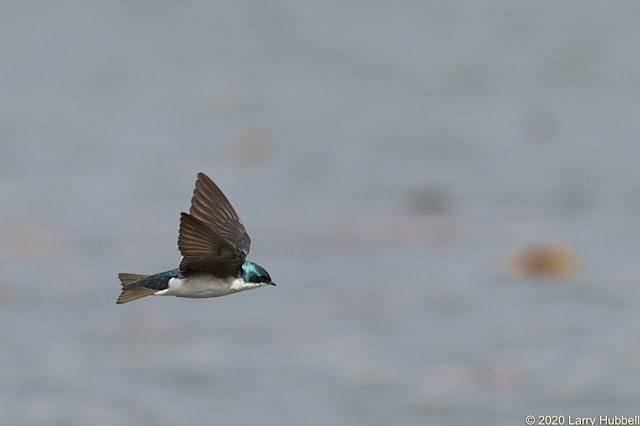 Friday afternoon, just to the east of the Conibear Shellhouse, many dozens of swallows circled and swooped as they collected insects. They were primarily finding their food a few feet above the water. Occasionally, they would shift their wings vertical, make an abrupt turn and pick off an insect sitting on the water, while still in flight.

Attempting to focus and follow the swallows in flight made my head swim. I would bet their tactics could be used to give fighter pilots lessons.

Swallows are some of the earliest migratory birds to return to Union Bay. Their return is a sign that Spring is on its way. Many times the excitement of seeing them is quickly followed by the question, 'What type of swallows are they?'

According to Seattle Audubon's Birdweb, Tree Swallows (as in the photo above) are generally our earliest arrivals. They are listed as common starting in March. Tree Swallows have short-tails and a relatively short migration. Central America appears to be as far south as they go. 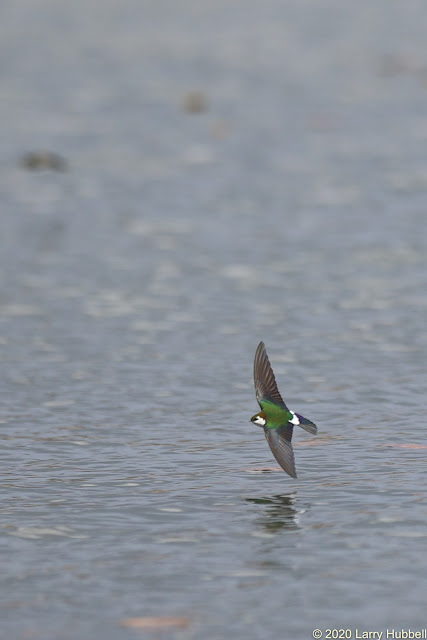 Violet-green Swallows tend to arrive next. They become common in April, according to Birdweb. During Winter, Central America is also their most distant destination.

On Friday, I noticed considerably more Violet-greens than Tree Swallows. The two species can be confusing, particularly if all we see are dark shapes dipping and darting in a sinuous death dance for insects. However, as you can see in these photos, the adult males do have color differences, which are especially evident when the sunlight breaks through the clouds. 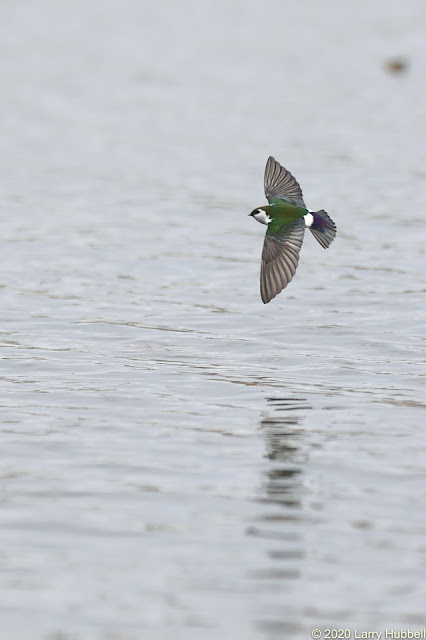 Not surprisingly, the Violet-Green has green on its back and a small, hard-to-discern violet patch above its rump. 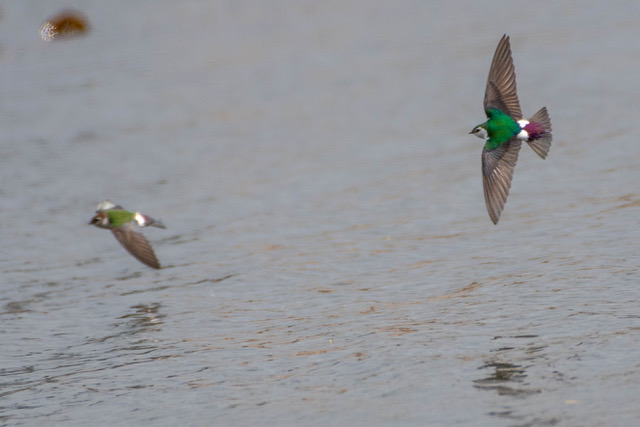 Friday, my friend Jeff Graham sent in this amazing photo which beautifully displays the colors of an adult male Violet-green Swallow. Thank you, Jeff! 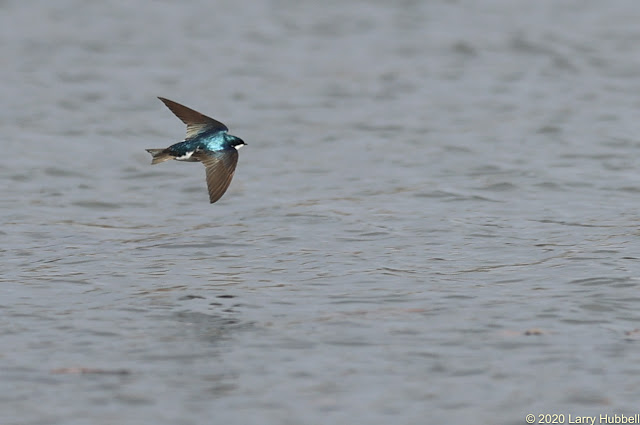 Adult male Tree Swallows have more of a blue back. It can reflect turquoise in the sunlight but under clouds, dark blue and dark green can seem pretty similar. However, unlike a Violet-green Swallow the Tree Swallow's uniform color extends from the forehead all the way back to the rump.

Another key difference between the two species is the amount of white on the cheek and on the body, just aft of the wings. 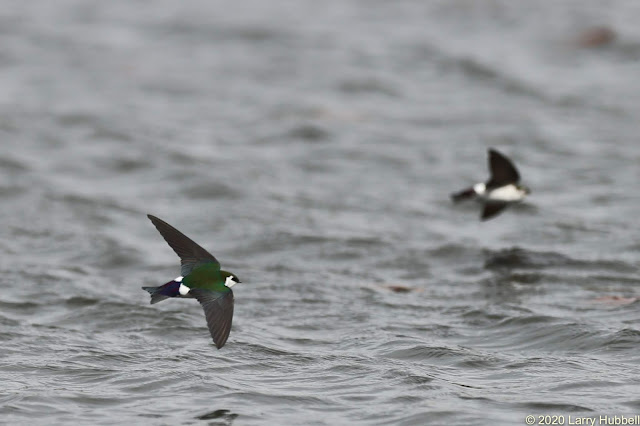 The Violet-green generally has white that circles up above the eye - kind of like the top half of a capital 'G'. It also has a white 'saddle' just behind the wings. Tree Swallows do not have either of these key characteristics. 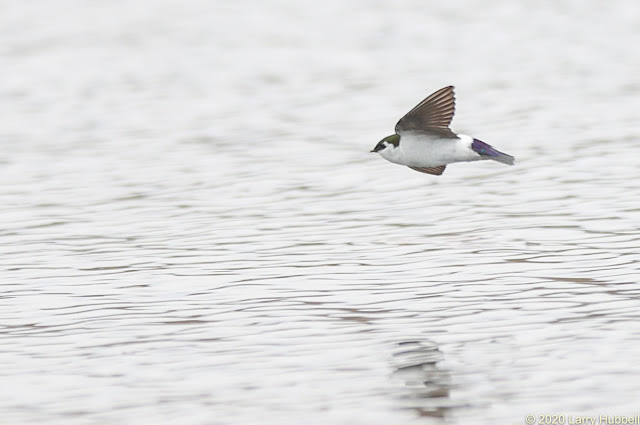 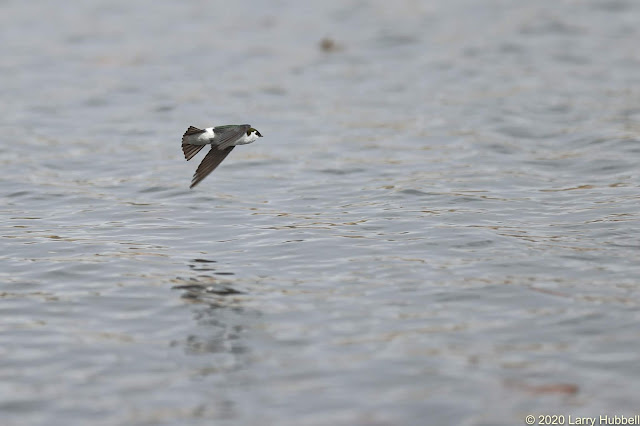 Curiously, their tails also seem somewhat different than most other birds. Their tails appear to pop out from the sides of their rump, instead of extending back behind the body. 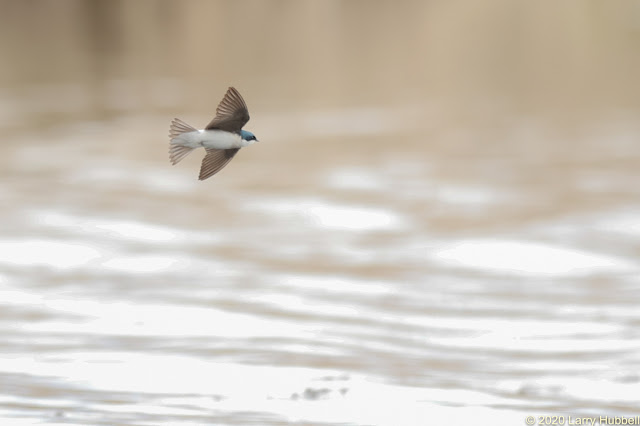 This Tree Swallow photo shows the tail arrangement even better. 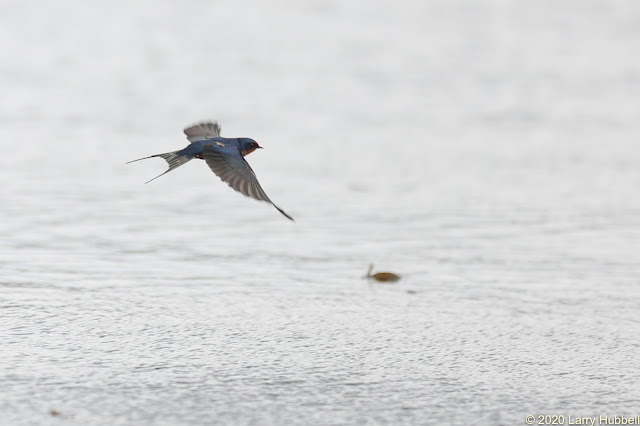 The third swallow species I saw yesterday was a Barn Swallow. It has a blue-black back but its slender outer tail feathers and burnt orange throat make it unique. I saw it rather infrequently. There may have been only one bird that I saw multiple times. According to Birdweb they are generally not common here until May.

Curiously, Barn Swallows have longer tails, take longer to get here and probably come from farther away. This Map (from Birds of the World) shows they can winter almost anywhere in South America.

By May, we can expect to see two more swallow species arrive at Union Bay. Do you know which two?

We can also expect to see all five species in a relatively small area. Imagine a triangle with its eastern corner at the osprey nesting platform in the Union Bay Natural Area (UBNA). The western corner would be directly west at the northeast corner of the Intramural Activities Center (IMA). Finally, the southern corner would be at the Wood Duck Box #7 i.e. just west of 'Number 2 Island'. All of these locations can be seen on my Union Bay map. Just Click Here, then use the plus sign to zoom in. Finally, click on the icons to read more specific birding information.

The round orange icon on the map provides information regarding Cliff Swallows which are our fourth potential swallow species.

The fifth species may feel like a bit of a trick. Clicking on the round purple icon will pull up what was intended to be Wood Duck Box #3. In 2019, for the first time, it was utilized by Purple Martins. It turns out that Purple Martins are Swallows. They are the largest swallow species in North America. You can read more about them in the post labeled, Purple Martins. 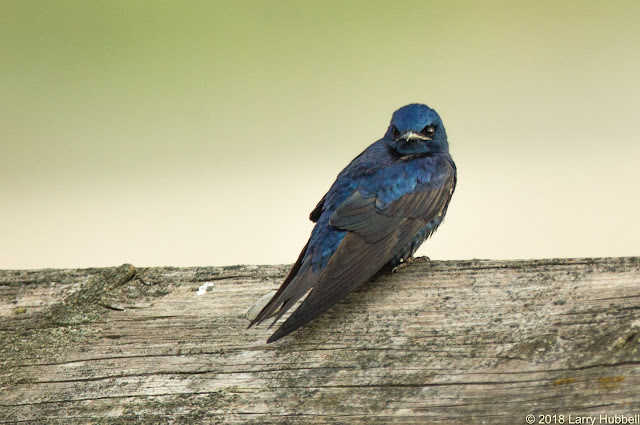 By the way, I learned from my Master Birder classmate, Kim, why I did not notice a mature, adult male Purple Martin (like the one in this photo) in and around Box #3 last year. Apparently, subadults - who are not yet in adult male plumage - can actually breed and reproduce. Evidently, that is what happened in 2019. This means that in 2020 and beyond, the male should be in his full, brilliant plumage when he returns to the northwest corner of Union Bay.

Kim also mentioned that our local Purple Martins winter in southeast Brazil. Which may explain why they are not the first swallows to return to Union Bay. Let's all keep our eyes peeled and watch for Mr. Martin's return!

We can also hope that a second pair notices the new Purple Martin box that was added to the Box #3 pole while the Martins were enjoying a Brazilian summer.

Have a great day on Union Bay...where swallows live in the city! 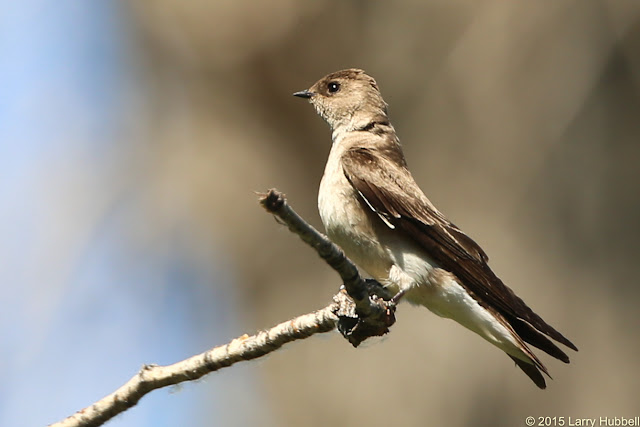 What type of swallow is this? Is it native to Union Bay? 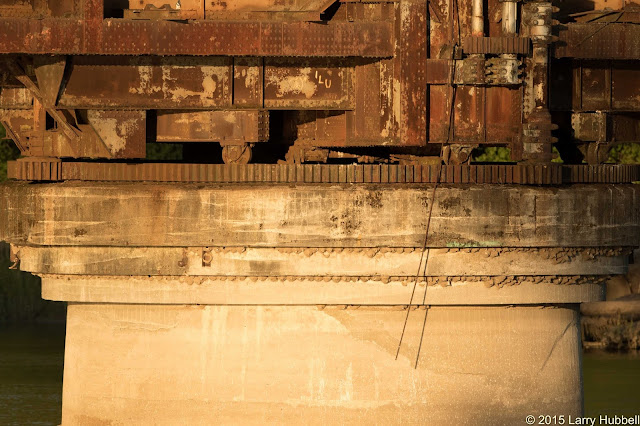 As a reward for reading this far, How many swallow nests do you see? This photo shows a concrete support for a railroad bridge located near Woodland, WA.

I am estimating there are 75 to 80 Cliff Swallow nests under the concrete collars around the top of the pier. 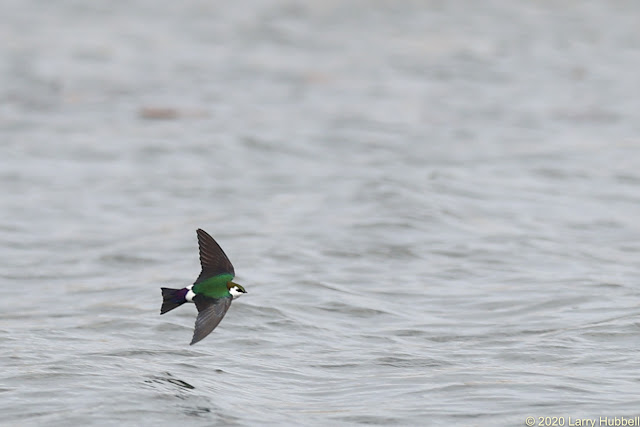 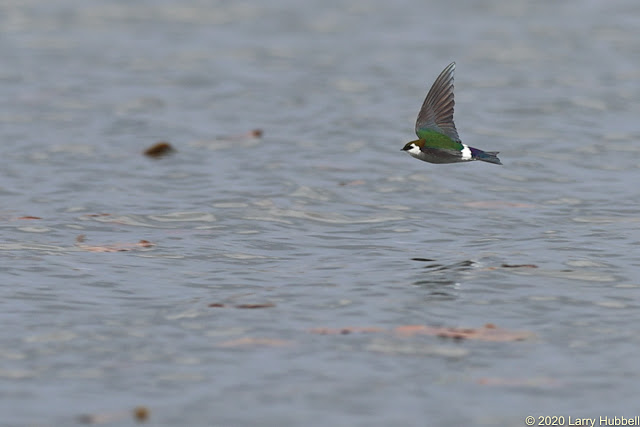