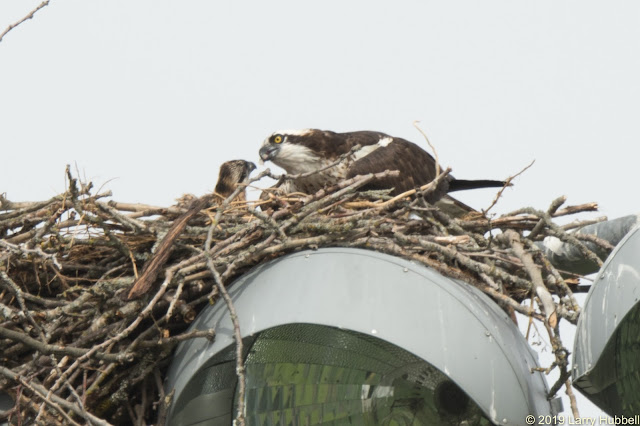 This is Hope, feeding her new nestling. I am estimating the little bird is around 3 weeks old. Given the height of the nest, it took a while for the small bird's head to become visible to those of us below.

I am thinking the best name for this young bird is, Rama. Rama has both Hindu and Hebrew meanings, some of which may even seem appropriate. However, none of these definitions are my reason for suggesting this particular name.

By the way, this is apparently Hope's first successful nest and therefore her first parenting experience. 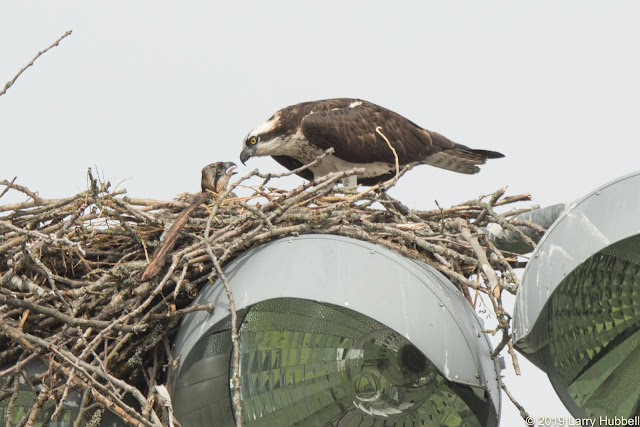 It might seem disappointing that Hope and her mate, Stewart, apparently have only one hatchling. However, on the positive side with just one in the nest, there will be no sibling competition. This young bird should get all the food it needs.

Even though the nest is near N.E. 45th Street, probably a quarter-mile north of Union Bay it does not seem to create any real issues for Stewart. I have read that Osprey can successfully nest many miles away from their fish supply. 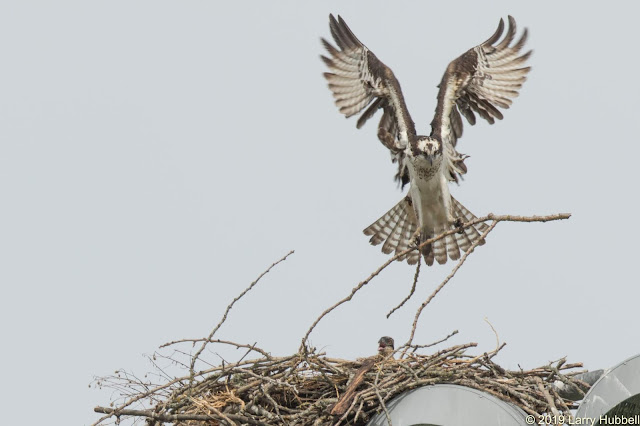 After Rama hatched out, my friend Ronda and I were both surprised to see Hope restart her nest building forays. I looked it up in Birds of North America (citation below) and apparently, this is a common behavior among female Osprey. 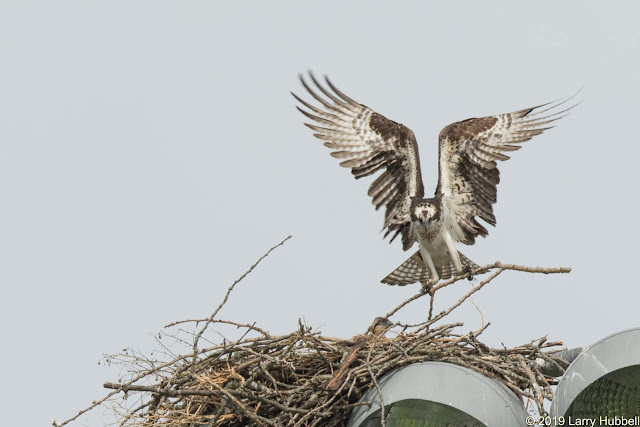 However, it does require a certain level of skill to safely add a four-foot-long forked branch to an active nest. 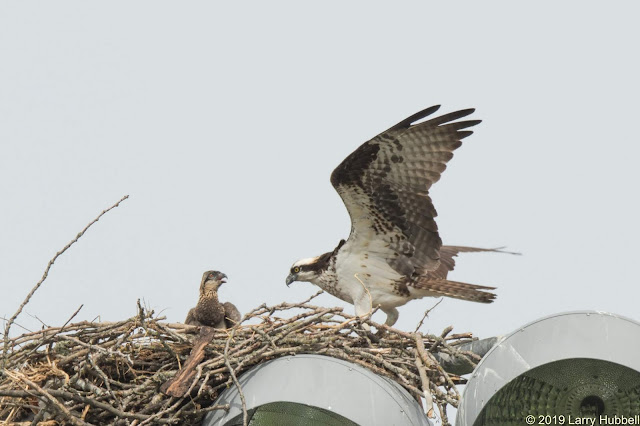 Apparently, this is a skill which Hope is still developing. 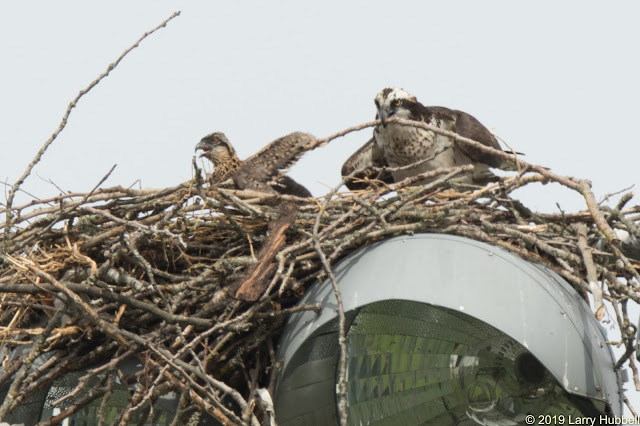 She ended up with the branch hooked under Rama's partially-grown left wing. Immediately, I started to worry. Would Rama get tossed out of the nest? Would the young Osprey be able to duck if the stick popped free? I remember as a child hearing, 'Be careful with that stick! You could put somebody's eye out.'

Since our local Osprey winter in Mexico, I often entertain the idea of giving them Spanish names. Since the Spanish word for branch is, Rama, it seems like a fitting name to me. 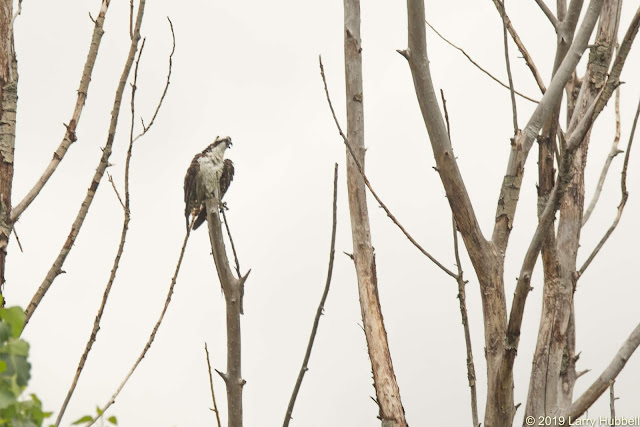 Two days later, on Thursday, I encountered another Osprey with a branch. When I first saw Chester, the male from the Union Bay Natural Area pair, he was calling loudly and circling above the University of Washington (UW) Baseball Field, with the branch in tow. Moments later he landed just north of their normal nesting platform. I wondered if he was intending to deliver the branch to the nest. (We still do not know for sure why Chester and Lacey did not attempt nesting this year.)

While Chester sat on the snag another male Osprey came south turned in a half-circle, around Chester, and then headed back north. I could not see the markings on the head but given the proximity and the lack of reaction from Chester I suspect it was Stewart.

The other day Ronda mentioned reading that second-year, male Osprey often return to the area near their parent's nest to set up their own territory. Since Stewart and Hope first attempt to build a nest was in 2018 that would imply the Stewart might actually be one of the two males from Chester and Lacey's original Union Bay brood in 2016. This also might help explain why Chester's reaction to Stewart was so low-key. You can read more about 2016 brood in the post called 'The Un-Snipe'. 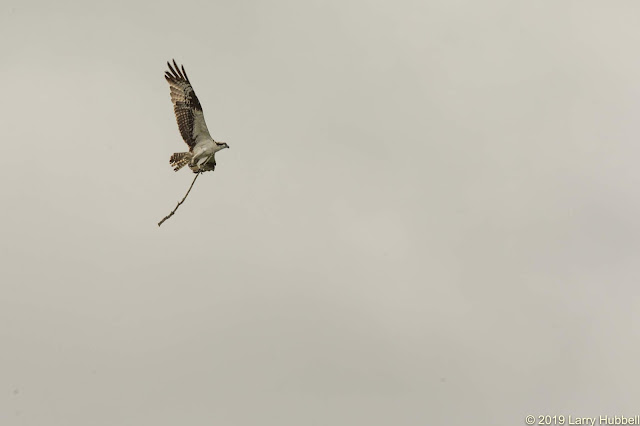 After a few minutes to rest, Chester took off with the branch. Initially, he appeared to be headed toward the nesting platform, but if so he overshot. 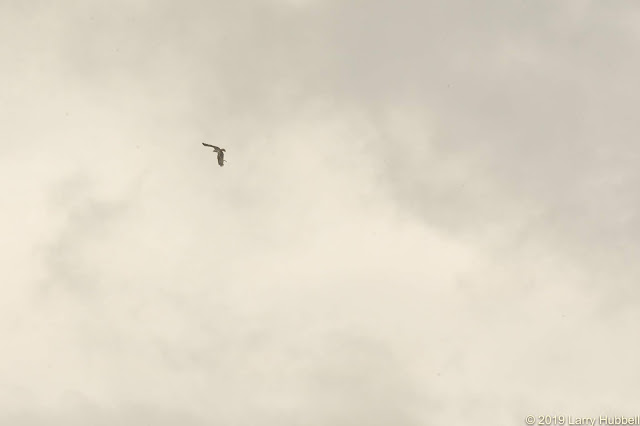 Chester headed out over Union Bay before circling back as he rose higher into the air. The circling continued. 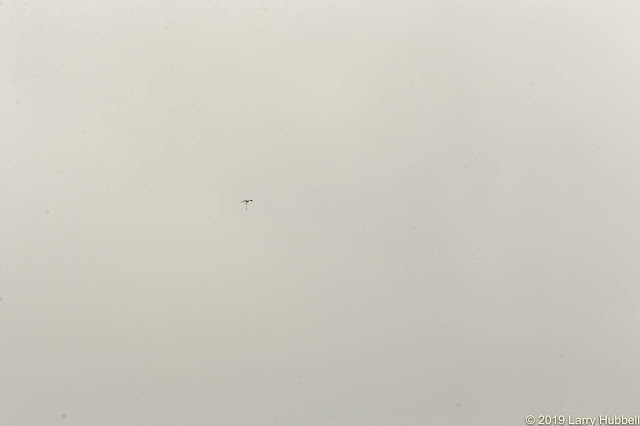 For close to five minutes he continued to circle and rise, circle and rise. He must have been well over a thousand feet in the air. I could barely see him with my naked eye and I could no longer see the branch, without help from my camera and lens. 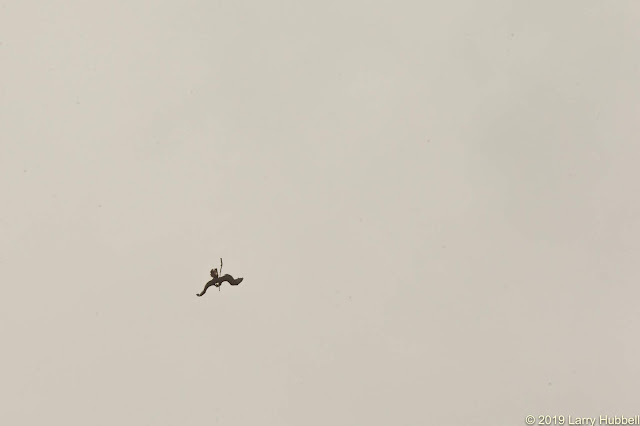 Once he reached a sufficient height Chester began diving, straight down. 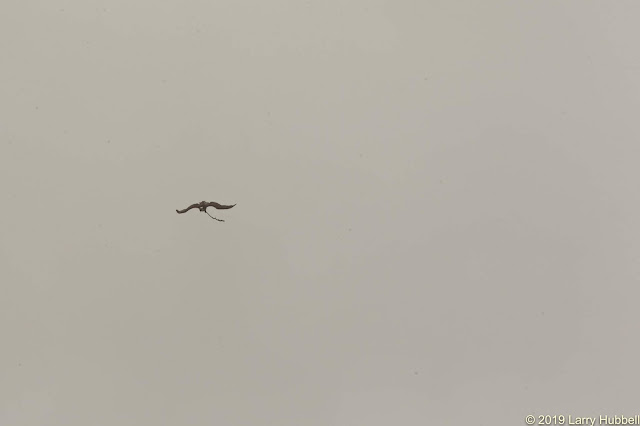 The dives were followed by momentarily turning horizontal. The gravitational pull on the long branch must have been quite strong when he hit the bottom of each dive. 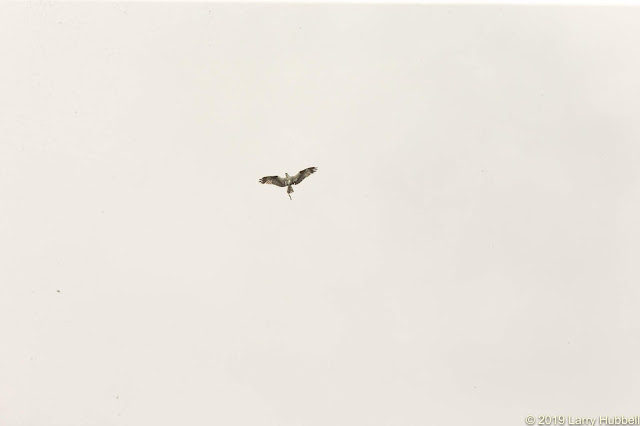 None the less, Chester held on to the stick and used his speed to turn vertical. He stayed in the vertical position for so long I suspect he almost came to a stop. Then he repeated the same 'J' dive over and over as he approached the ground. Click Here to see a similar process recorded in a video by Martin Muller - from the Urban Raptor Conservancy. 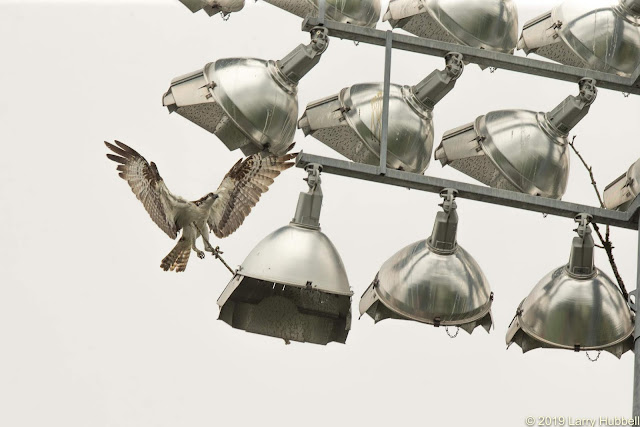 Ultimately, Chester returned to one of the UW light poles which he had been circling earlier. 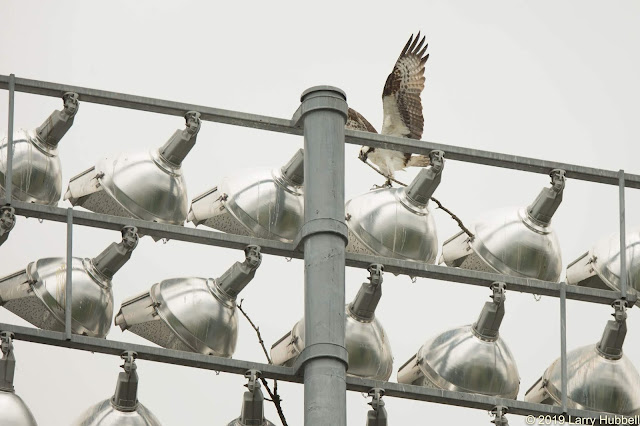 I checked the time stamps on my photos. He held on to the same branch for over fifteen minutes. Most impressive was that after resting on the dead snag he carried the branch in the air non-stop for over seven and a half minutes, while either climbing or diving.

Last year, I watched him do a similar set of dives, which at the time I called an Air Dance. (Apparently, it is more often referred to as a Sky Dance.) Click Here to read that story. The previous air dance was different in a number of ways. It was in the Spring instead of Summer. He was carrying food not a stick and it was done directly in front of Lacey. It was clearly part of their annual courtship process.

This time, I did not notice Lacey in attendance, we are past the courtship time of year and he was carrying a stick not food. I am really uncertain what the Branch Dance was all about. However, male Osprey who have a nest which fails, like Chester and Lacey, are said to sometimes build a new nest in the area before heading south for the winter. I hope the fixation on the branch, and the display over Union Bay, indicates Chester will try nest-building somewhere close. 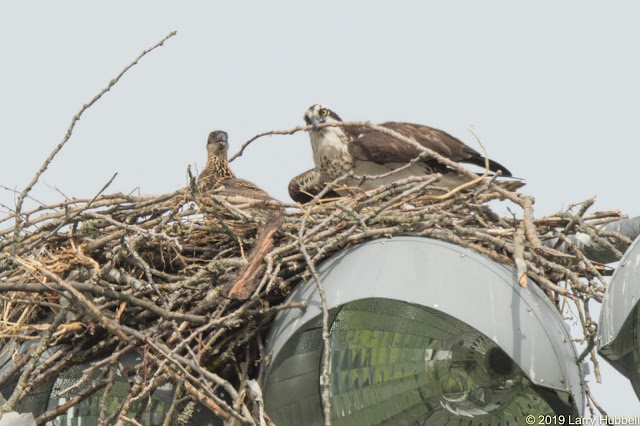 Flashing back to Rama and Hope, she ultimately wiggled the branch out from under Rama's wing, without doing any apparent damage. 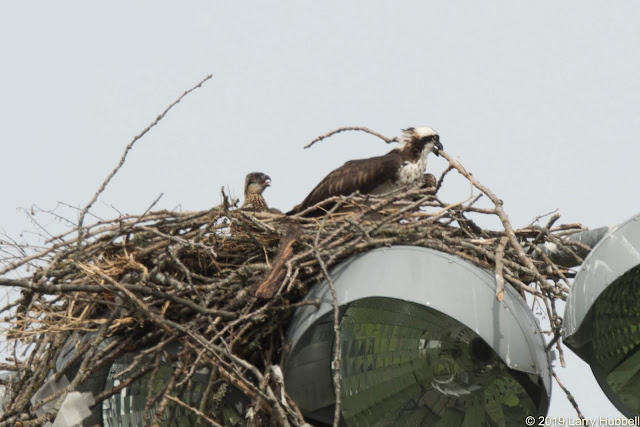 Hope then turned and placed the branch on the east side of the nest. It sure is wonderful to see another young Osprey growing up near Union Bay, especially since Chester and Lacey will not have young of their own this year. Hopefully, this summer the fish will be plentiful and next year we end up with two successfully nesting pairs of Osprey.

Speaking of fish, Friends of Arboretum Creek is hosting a Community Meeting this coming Monday (details below). We are hoping to enhance the stream with year-round water flow which will benefit fish, birds and the surrounding ecosystem. I certainly hope you are able to attend! 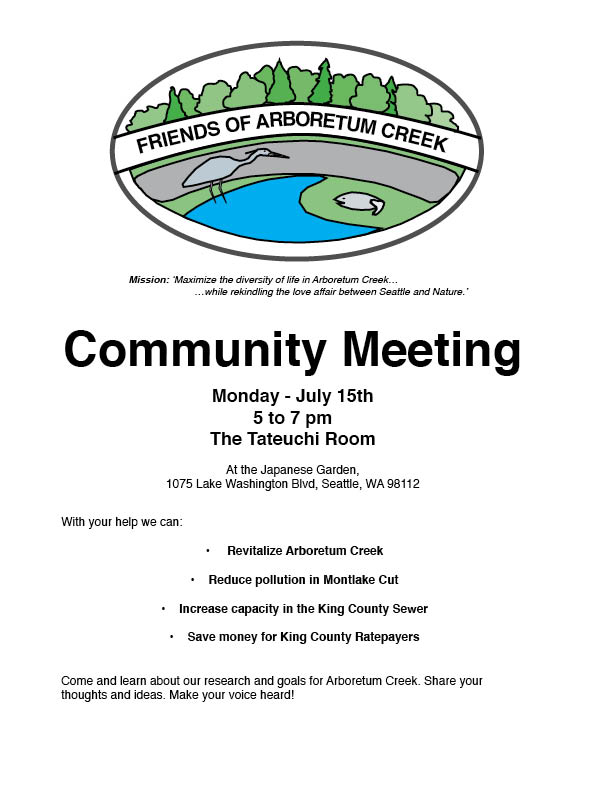 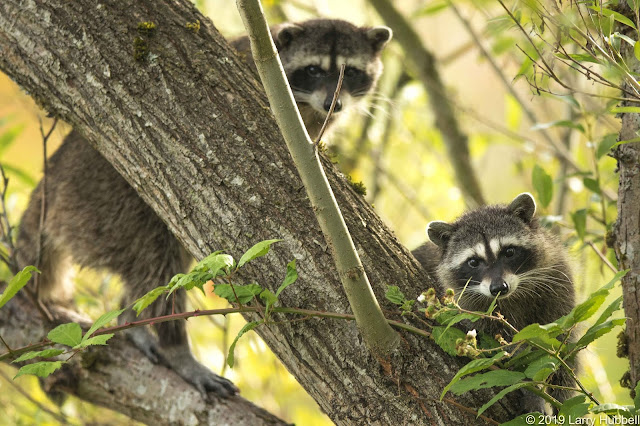 Are Raccoons native to the Pacific Northwest?

These were seen, earlier this week, just south of the Conibear Rowing House.

Raccoons: They are native and they look cute but they can be challenging. If you want to see a delightful set of videos, including young raccoons and birds, please Click Here. The link will take you to visit Dan Pedersen's blog which this week includes some incredible videos of young creatures provided by his partners Craig and Joy Johnson. I promise the videos will make you smile!


My email address is LDHubbell@comcast.net
Posted by Larry Hubbell at 4:10 PM