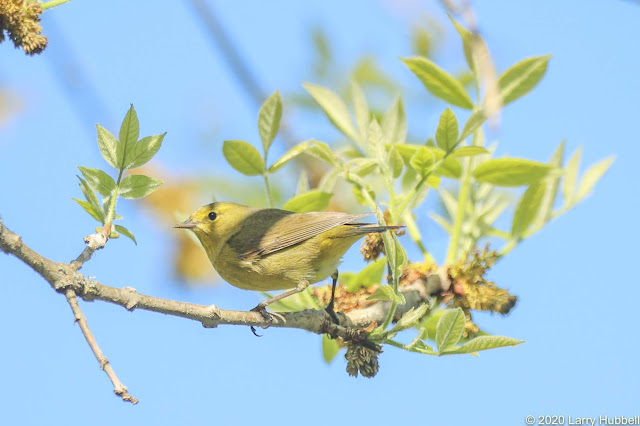 Orange-crowned Warblers are beautiful and inspiring. They commonly arrive in the Spring to breed in our area, however, they follow the sunshine and migrate south when our skies begin to turn gray in the Fall.

They nest and often feed close to the ground. From a birding perspective, this does make them somewhat easier to see. In spite of thick foliage and quick movements, at least, they are often at eye level.

On the other hand, low nests can be easily disturbed or raided by a variety of creatures, including outdoor cats and off-leash dogs. This is true for all of our ground-nesting birds. Concern for their defenseless eggs and immobile young is especially valid from Earth Day, when the bulk of nesting is getting underway, until Independence Day, at which point many young birds have fledged. 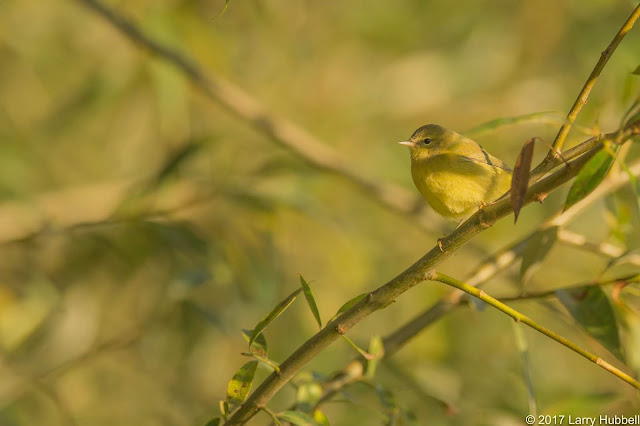 So far, I have never photographed one of their orange crowns. From the front... 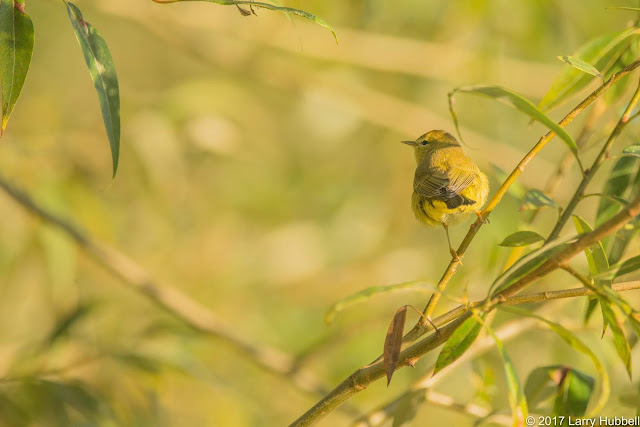 ...or from the back, somehow the crown still eludes me.

The seventh slide on All About Birds does show that their crowns really do exist and can even be photographed. Hopefully, my persistence will pay off someday. 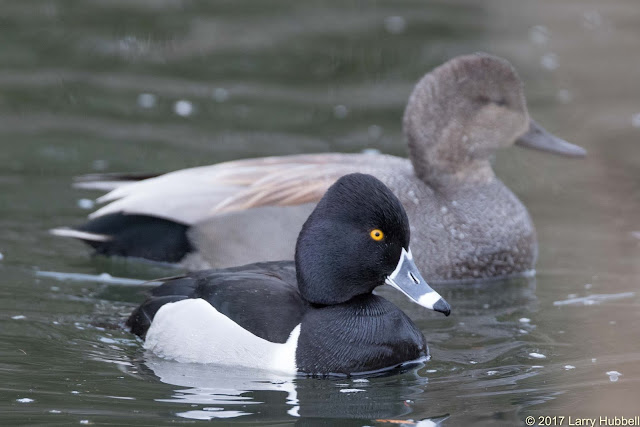 Another bird with a 'challenging' name is the Ring-necked Duck (RNDU). The ring is normally hidden. 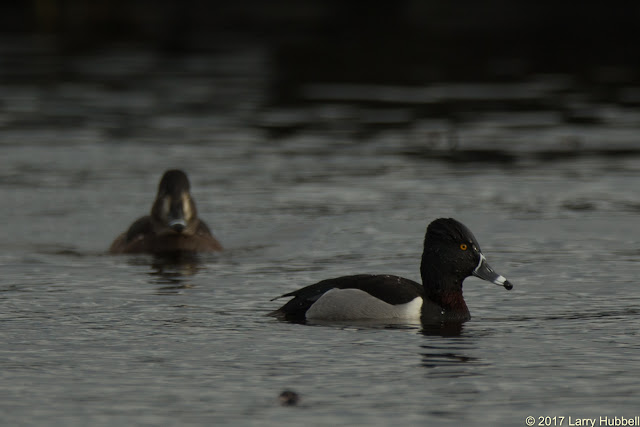 Females (there is one on the left) do not have ringed necks. Plus, even if the males are sitting at the correct angle and the light is reasonably good the density of the color in the ring is so similar to the black on their heads and chests that it can be nearly impossible to see. 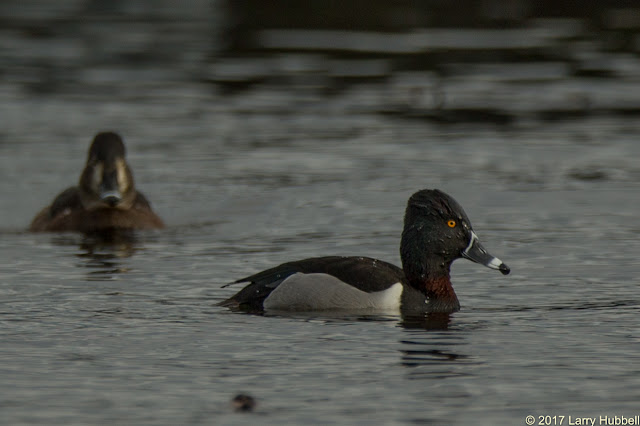 By zooming in and brightening the shadows, I can almost see the wine-colored ring around this bird's neck. However, I am not exactly certain how much imagination is involved. 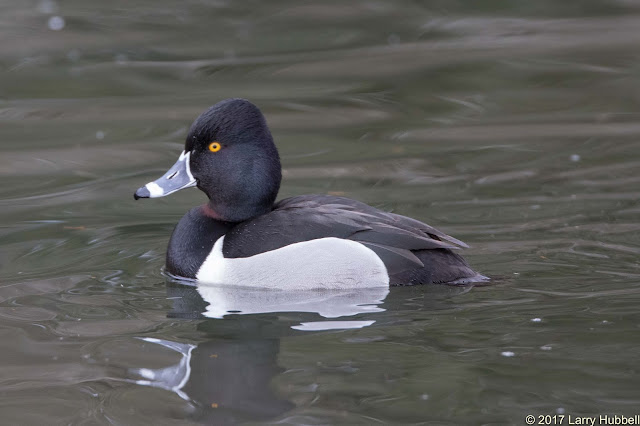 Occasionally, when very lucky, I can document a portion of the ring. In this case, it is visible just above the chest. 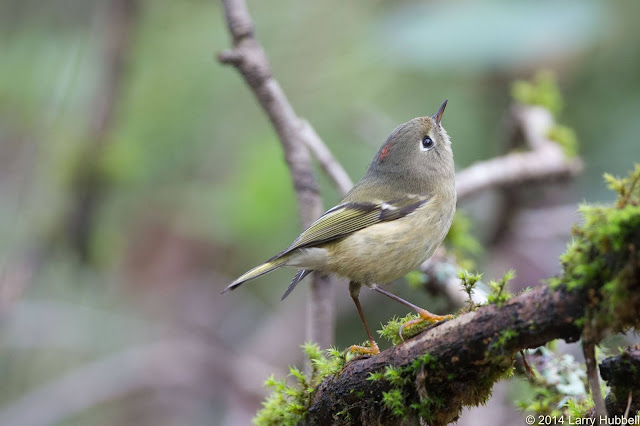 The other classic example of this type of naming challenge is the Ruby-crowned Kinglet (RCKI). Luckily, they are here in the Wintertime when there are fewer leaves to obstruct the view. In this photo, you can see just a hint of the bird's ruby crown on the back of its upturned head.

I am still hoping to someday catch a photo of one of their crowns fully extended. Although, that may be challenging because I suspect they show off their crowns most often during the breeding season, which they spend in the mountains. 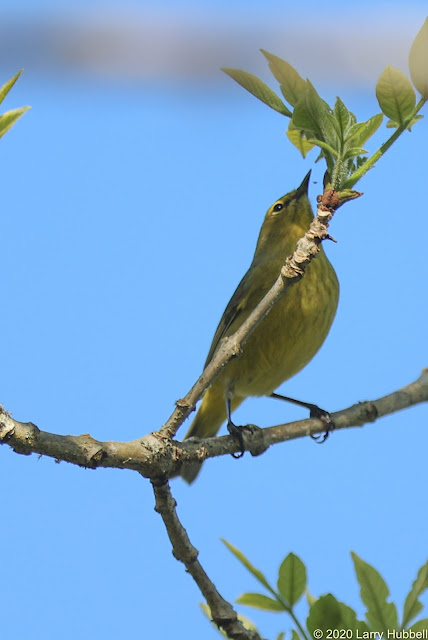 At least, with the Orange-crowned Warbler, there are some other aspects of its plumage that can be helpful. For example, the subtle stripes on its chest. 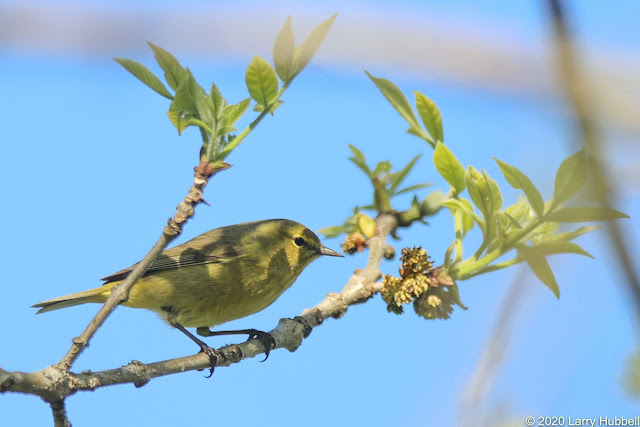 They too are not always visible and shadows can make them rather difficult to distinguish. 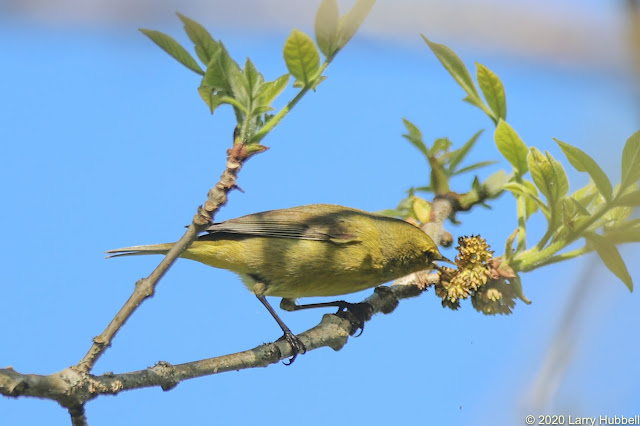 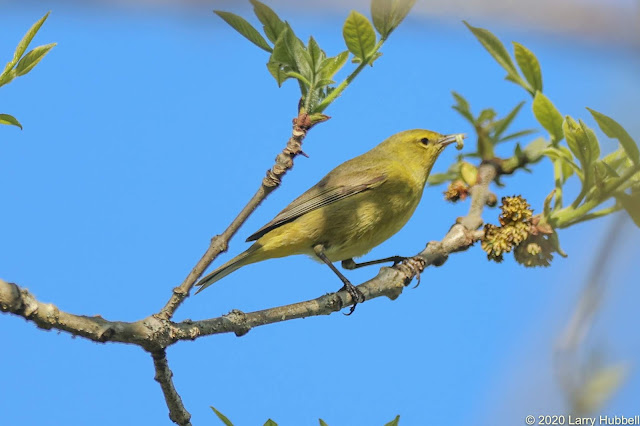 Well-camouflaged little caterpillars are probably critical to both them and their young. 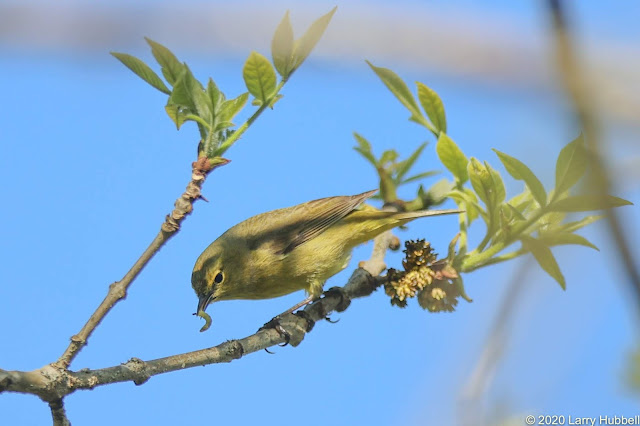 Another important characteristic, which helps me to identify Orange-crowned Warblers, are their broken eye-rings. 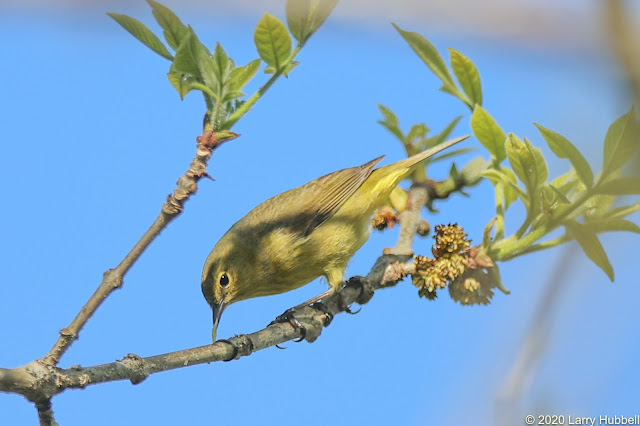 The rings are split by a subtle dark line that appears to run directly through the eye. There are other warblers with a somewhat similar arrangement, however, a good glimpse of the eye ring can help to eliminate both the Yellow and Wilson's Warblers as possibilities. 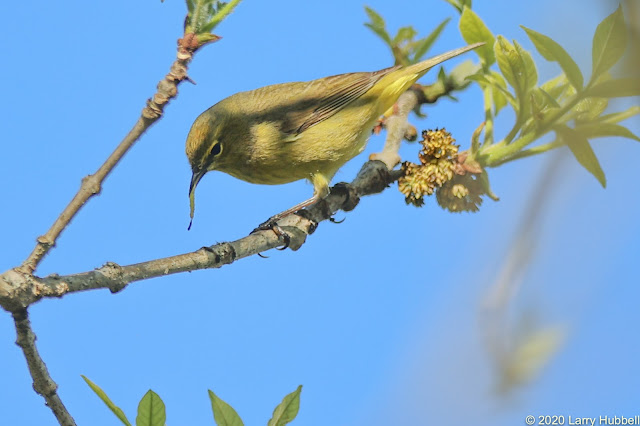 In total, there are four sub-species of Orange-crowned Warblers in North America. Our local subspecies is the brightest in color. I find their relative brightness surprising because our subspecies of Black-capped Chickadees (BCCH) and Downy Woodpeckers (DOWO) are some of the darkest on the continent. I have thought the darkness was due to the clouds in our area, however, if that is true then what is the reason for the sunny, bubbling, brightness of our Orange-crowned Warblers.

The only thought that comes to mind is that the BCCH and DOWO are here year-round, so they get the complete winter darkness experience. Perhaps, having a relatively darker plumage helps hide them from predators - especially when the leaves have fallen. In the case of the Orange-crowned Warbler, they are only here during the brightest months of our year. Plus, during winter they reside in sunny places like Mexico or California where their relative brightness may be their most effective camouflage. 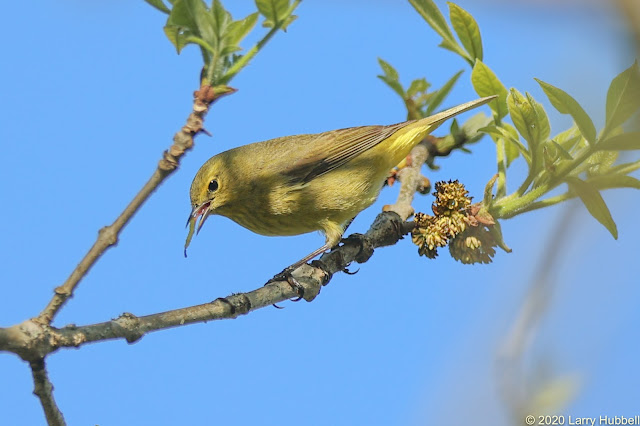 Curiously, the brightest spot on the Orange-crowned Warbler's body is in the last place I would expect - under the tail. The under tail coverts cover the unfeathered base of the tail feathers. I really can't imagine how having your brightest feathers in one of your most hidden locations is beneficial. I suppose this is just another example of why I find nature endlessly fascinating. 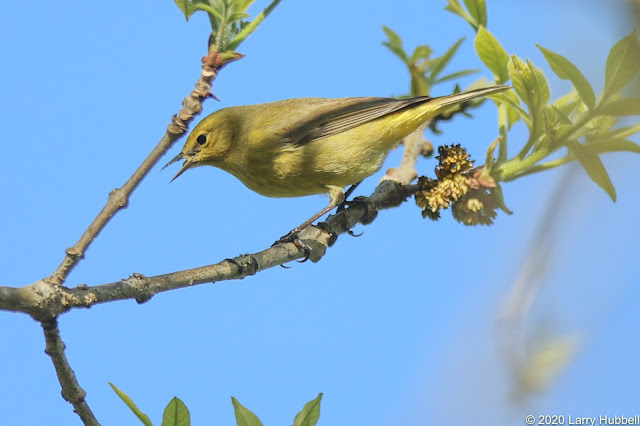 You may still be wondering about the title to this week's post, 'Oh See WA'. It kind of looks like some kind of surprising reference to seeing the state of Washington, but it's not. There is a logical link to Orange-crowned Warblers. If you don't have time to figure it out, scroll to the bottom of this post and I will explain. 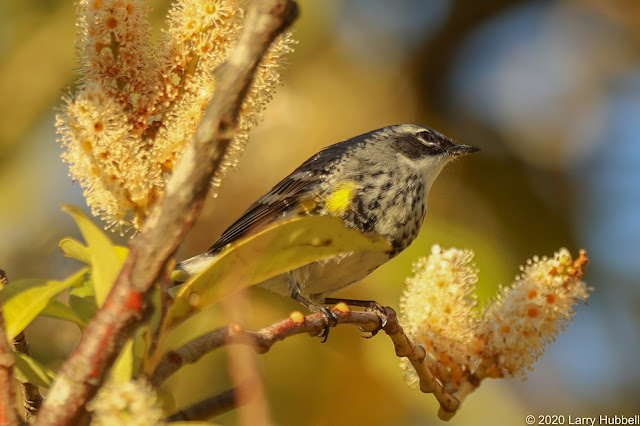 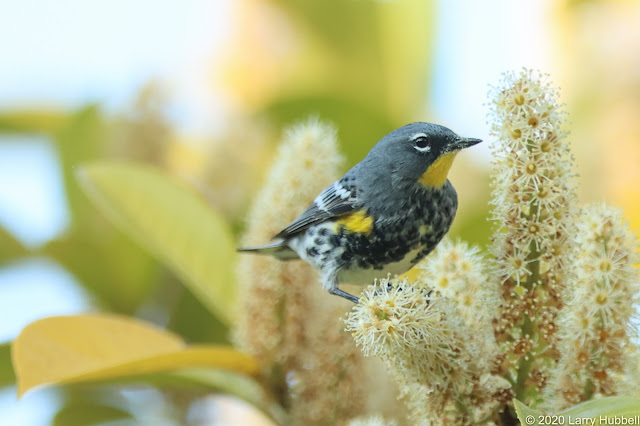 Yellow-rumped Warbler: These are both the same species. However, they are two different subspecies. The first, with the white throat, is one of the Myrtle subspecies. The second, with the yellow throat, belongs to the Audubon's subspecies. They can be found year-round in our area but their number dramatically increase this time of year as massive number migrate north to breed. In addition, their colors are particularly vibrant during the breeding season i.e. right now. 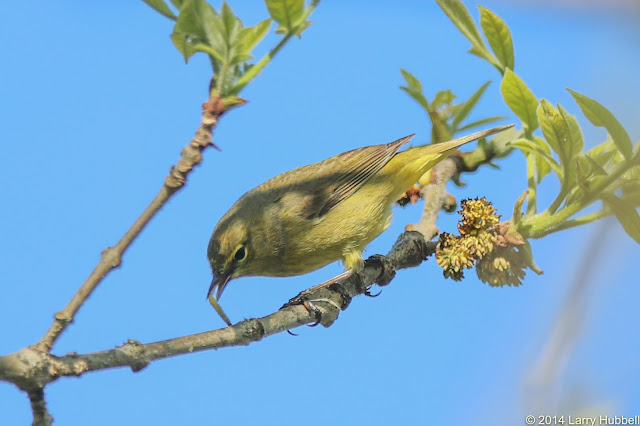 Long before Twitter, birders figured out that codes were a quick way to help document the birds they saw. The commonly accepted four-letter code for an Orange-crowned Warbler is OCWA. Similar to the RNDU and the RCKI, the Orange-crowned Warbler's code comes from the first letter of each of its hyphenated names plus the first two letters from its last name. OCWA inspired the rather cryptic title to this post, 'Oh See WA'.