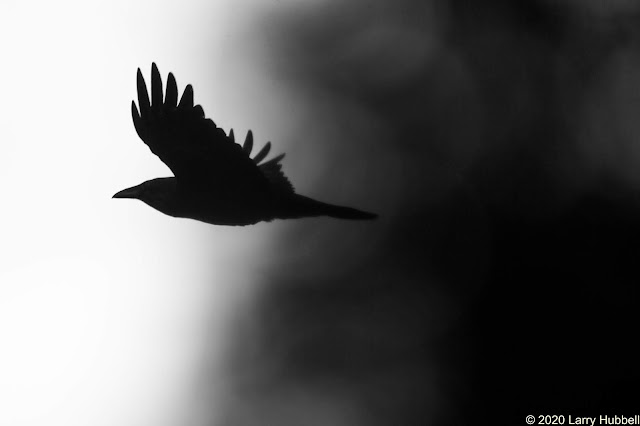 Common Ravens are unique! They are the world's largest songbird. As such, they do not have the curved bill or long talons of an eagle or a hawk. Ravens rely on their intelligence more than their physique. Their most overlooked physical gift maybe their color. I heard a new phrase this week which seems to apply, 'Black conceals and white reveals.' When ravens settle into the shadows they seem to simply disappear. As songbirds, they can be bold and loud, but they can also be silent and subtle. 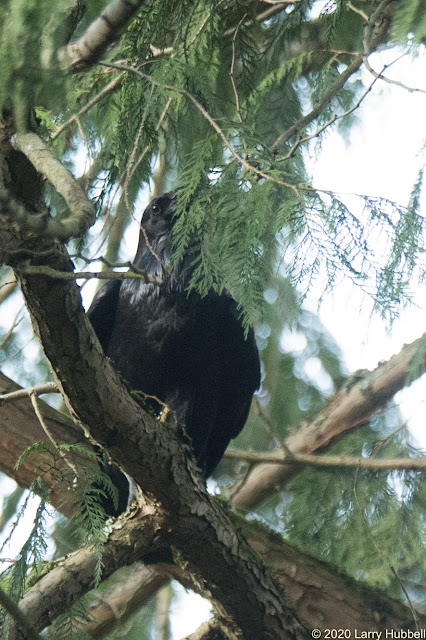 If you wander through their territory it is highly likely that they are watching you, even if you do not notice them at all. I do not think it was an accident that Edgar Allan Poe chose a raven to star in his most famous poem. Their intelligence feels obvious. They seem more similar to humans than any other avian species. 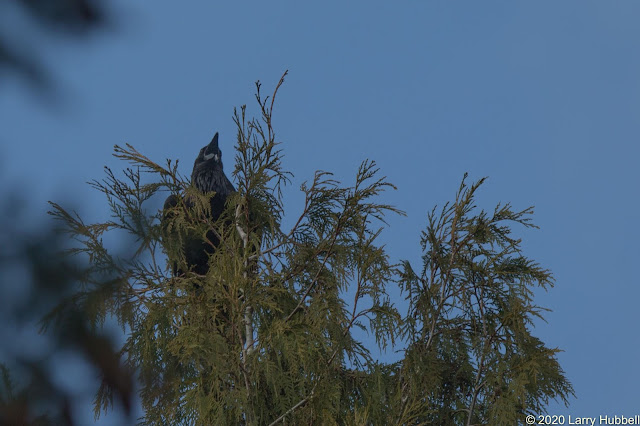 On the other hand, when they choose to be heard they can be very hard to miss. I first saw ravens in the Arboretum, almost one year ago. Ever since I have been wondering, Would they stay? Would they adapt to the constant presence of humans? Would they find adequate food? Would all our mechanical noises be too much for them? This week, for the first time, they may have finally made their intentions known.

Common Ravens exist all around the world and even though I do not comprehend their language, scientists think that the ravens may have different versions of their 'language' depending on where they live. In Birds of North America (BNA)*, I found the following comment regarding ravens, 'Recent evidence suggests that there are local dialects and individual-specific calls so that the total vocal repertoire may be virtually limitless.' That certainly sounds a lot like humans, except that ravens can vocalize sounds which we can only dream of making.

*Enggist-Dueblin, P. and U. Pfister. (1997). Communication in ravens (Corvus corax): call use in interactions between pair partners. Advances in Ethology 32:122. 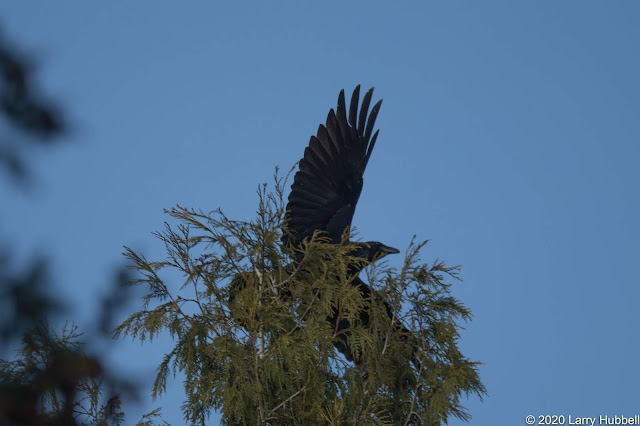 When compared with American Crows, Common Ravens have longer wings which help them make use of wind currents and up-wellings. Crows have shorter, rounder wings and their nearly constant wingbeats give them away. You can read more about how they compare by Clicking Here. Another new phrase, which I just learned lately, is 'If it's rowing, it's crowing!' This seems like an excellent memory tool for distinguishing distant crows from ravens.  Thank you, Bev. 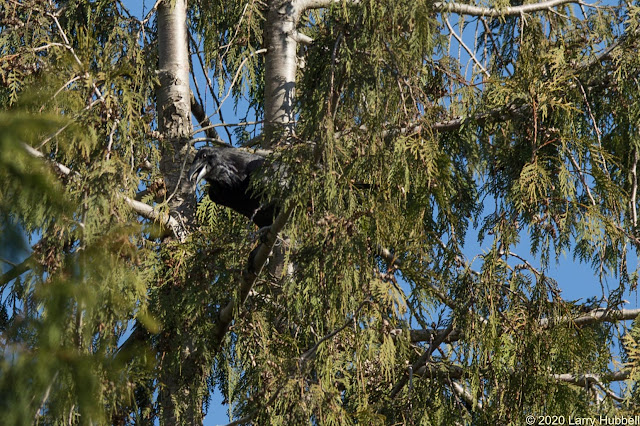 For the last year, I have been waiting and hoping to see signs of nest building. This week, I was lucky to see at least two ravens moving through the upper branches of tall trees. As they worked they seemed to appear only momentarily before blending back into the shadows. 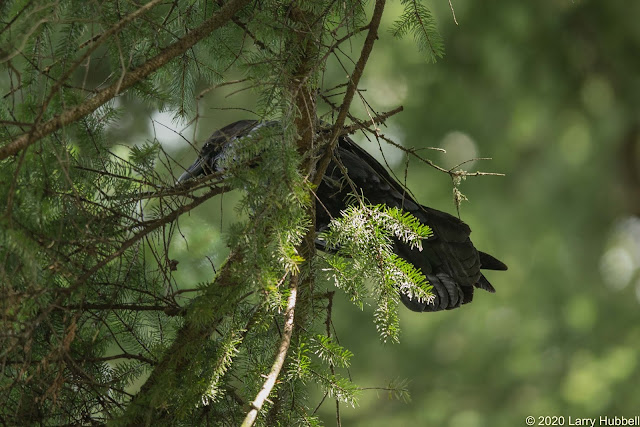 They seemed to prefer the tallest of the native trees and they worked on limbs which were quite high but with cover overhead. 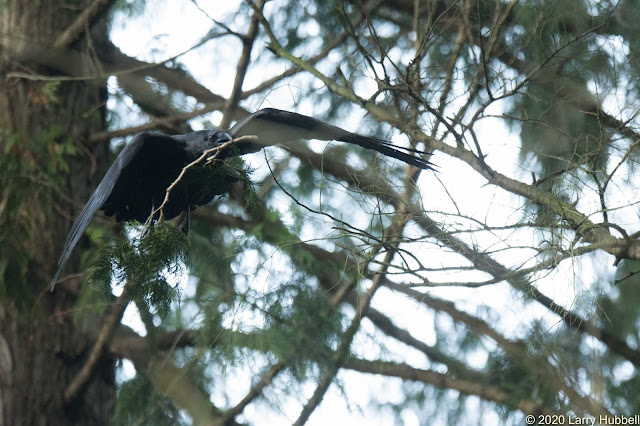 On Monday, it became evident that the ravens were nest building. I was somewhat surprised to see them carrying green branches with foliage still attached. I wondered if the foliage might indicate that their nest is nearing completion. 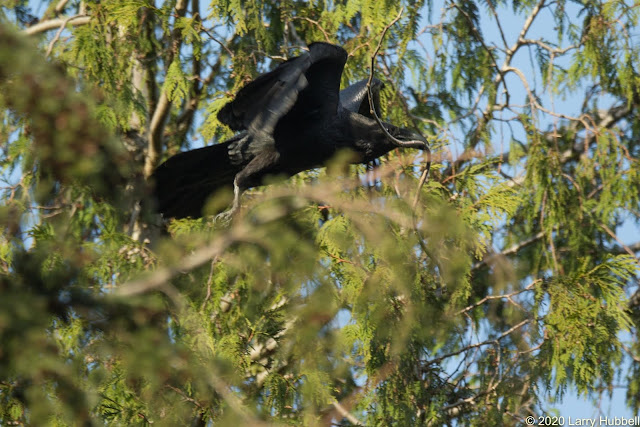 However, they also carried branches without foliage. 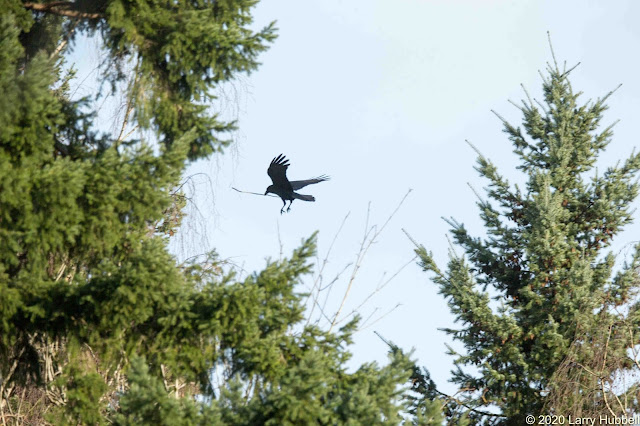 They worked at two different sites. Surprisingly, I cannot find any mention of ravens building two nests at one time. BNA* says, '... Nonetheless, despite more than 1,400 research  reports and articles on this bird in the scientific literature, there are many gaps in our expanding knowledge of this fascinating species.'

I also could not prove that I saw only one pair of ravens, maybe there were two pairs, but I doubt it. The 'nest' sites seem simply too close for comfort. 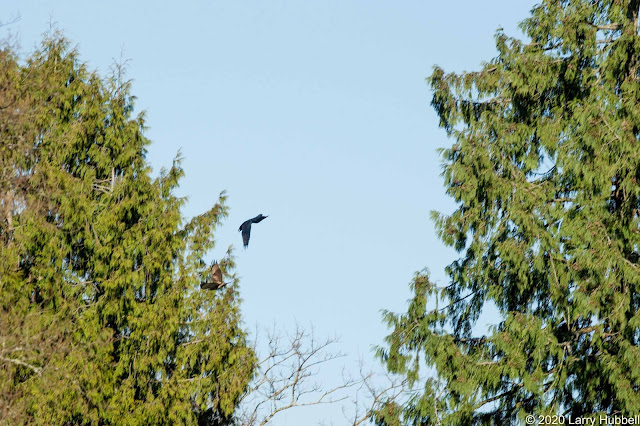 The next day, I saw one of the ravens chase a Red-tailed Hawk out of the Arboretum. Red-tails and Ravens are of a similar size but the hawk is endowed with the talons and tools of a predator. The second raven trailed behind the first one, apparently ready to provide air support if needed. The first raven's courage and indignation carried the day. The hawk's focus was on escaping.

Both the hawk and the secondary nest site were roughly the same distance from the primary site. Plus, each following day, as I visited the Arboretum, I heard a raven calling near the primary site, although, I seldom saw them. I am excited to say that, this year, I believe the Ravens will be raising young in and around the Arboretum.

In both cases, the trees were tall and the foliage thick. I have not actually seen either nest. I can only infer from what I have observed.

At present, I have no plans to publish their potential nest locations. I do not know how much attention might be too much for the Ravens. Plus, I would not want to deprive anyone of the joy and mystery I have experienced. Following their sounds and movements with reverence makes every new reveal an incredibly satisfying experience. I know and respect that they are making a choice to reside close to us. This common existence is a treasure to be protected and an incredible opportunity to enrich our urban lives. When I am in their territory, I too strive to be silent and subtle. So far, it has certainly been worth the effort! 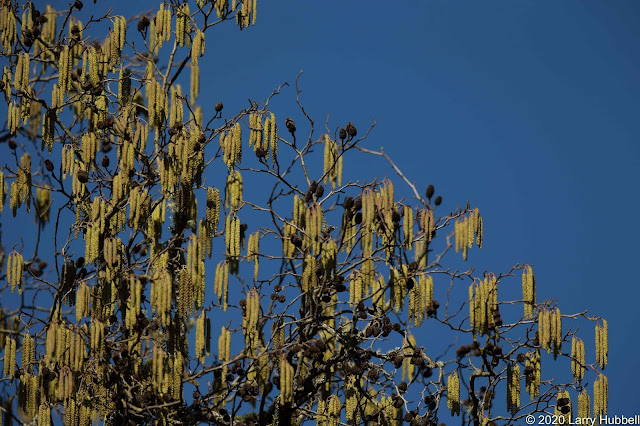 Until the leaves come out, I cannot be absolutely positive whether this is a native tree species. However, I believe there is only one primary native species that has been showing yellow male catkins, like these, during the last month. Which one is it?


As a reward to those who have read this far, let me recommend this week's post by my friends Dan, Craig and Joy at: