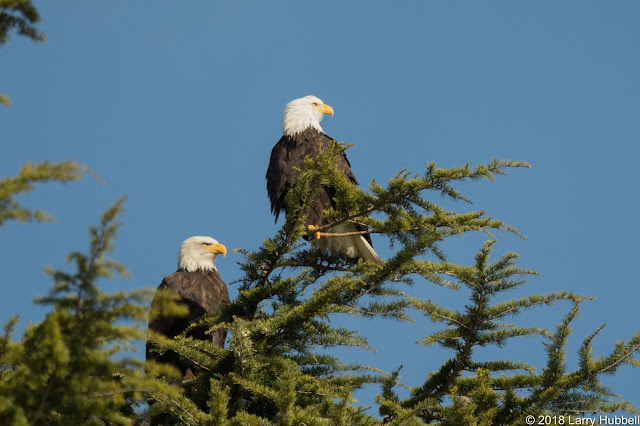 Marsha and Monty are the newest pair of Bald Eagles that nest on Union Bay. Marsha, on the left, is slightly larger and her white head feathers never seem as clean as Monty's.

They often sit on top of the old world cedars just north of the Waterfront Activities Center (WAC). This location, on the southwestern shore of Union Bay, is obviously their favorite hunting roost. By clicking on this Union Bay Map you can get a more precise idea of the location.

(Roosting locations for all three pairs of Union Bay Bald Eagles are indicated by white diamonds. Clicking on the diamonds will bring up clarifying descriptions. By the way, a significant number of other updates have been added to the map.) 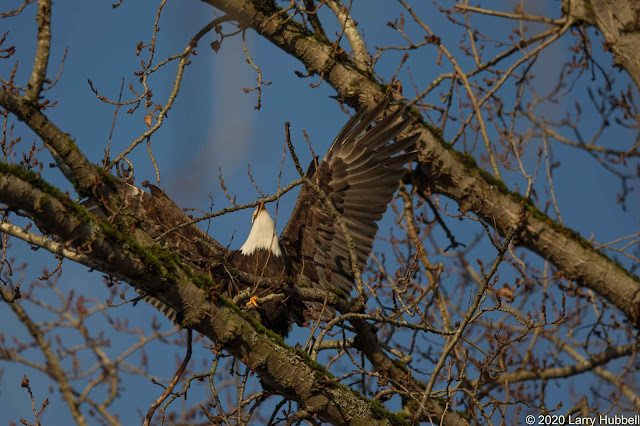 This is Monty struggling to break a branch off a cottonwood tree near their nest on Sunday. 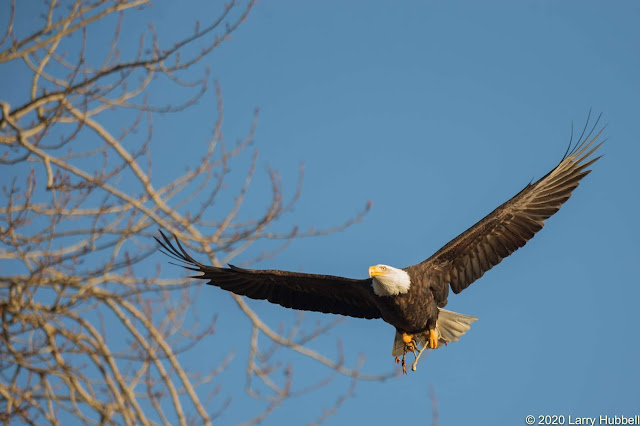 Marsha, being larger, has less of an issue procuring a branch from a cottonwood tree on the north side of The Cut. 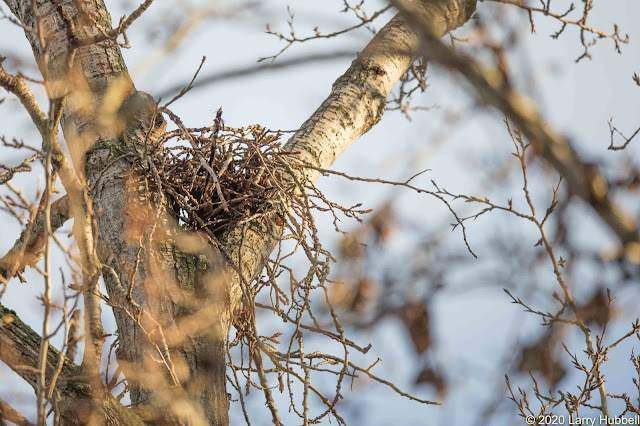 Currently, the Montlake Cut nest is not too impressive. Last years nest, as well as their original 2018 nest, fell apart as the eaglets grew. The resulting struggles of last year's young can be read about in these posts:

Cutter and Bay and

Once again, the parents are rebuilding the nest on the southeast corner of the Montlake Cut. By the end of March, the nest should once again be at least large enough to hold Marsha and this year's eggs. Marsha and Monty get credit for their tenacity, but their engineering and construction skills are still a bit suspect.

By the way, do you know why their nesting location may be the best nest site in King County? 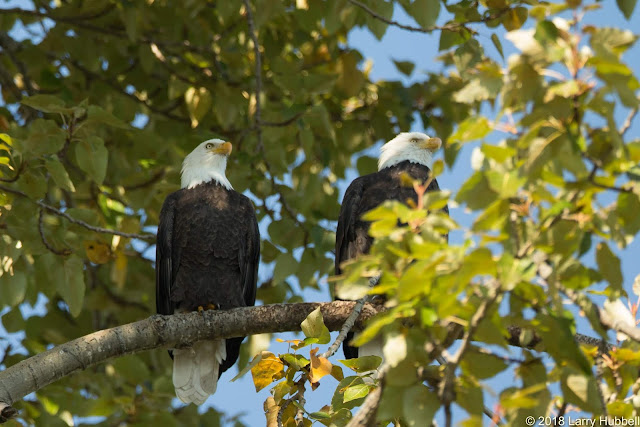 This October photo shows their nearest neighbors, Talia and Russ. This pair nests on the north side of Union Bay, in the old Talaris property. However, they commonly roost in the first cottonwood immediately north of the WAC. This roost is quite close to where Monty and Marsha prefer to sit. Both locations are shown on the Union Bay Map. 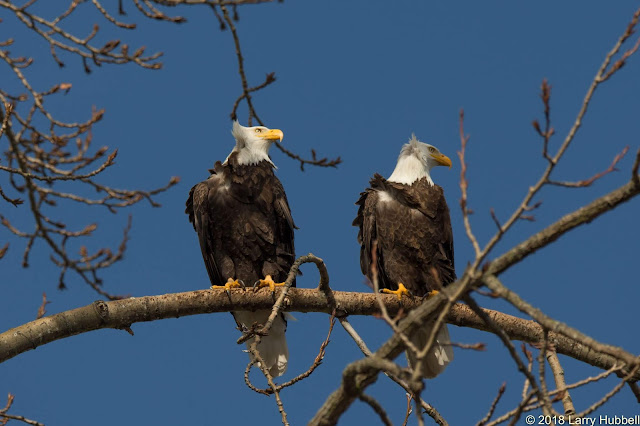 By mid-winter, the leafless tree looks pretty bare, but it is almost always the same pair in the same spot. Even the winter wind does not disturb their hunting focus. 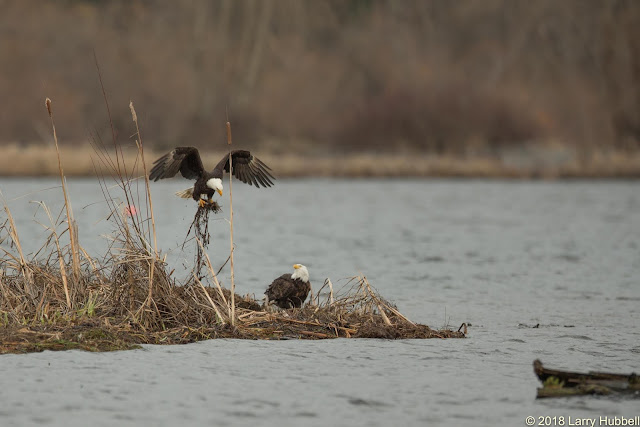 A couple of years ago, I watched Russ pulled grass from an offshore island. He then carried it directly back towards their Talaris nest, which certainly helped to validate which pair I was watching. 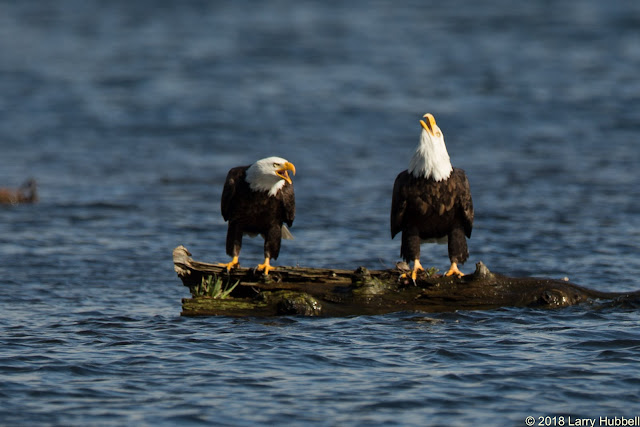 The next week, when the sun broke through they landed on the nearby log. Both of them called out their greetings. Clearly, this little island and log are in the southern part of their territory. 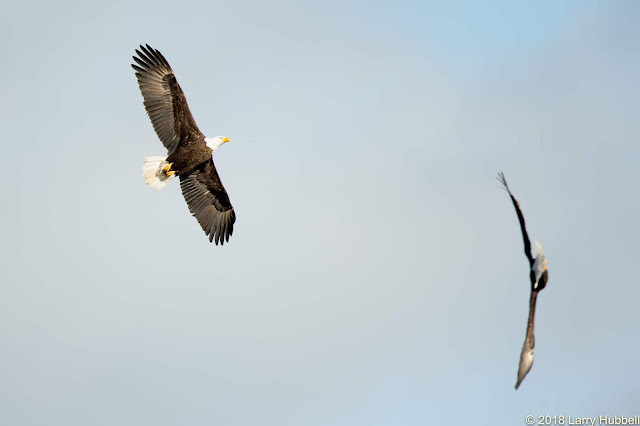 Commonly, when an eagle from either pair heads directly out over the water, all four of these eagles take to the air. There is lots of circling, diving and calling as they enforce the invisible boundary between their territories.

Lately, I have occasionally seen Monty or Marsha wander over the line apparently looking for food, whenever Talia and Russ were not nearby. Often, the northern pair will notice the incursion and the two of them will come streaking across the bay to chase the invader away. As apex predators, eagles tend to take whatever they can easily get. I have never seen them actually fighting. Apparently, intimidation is less risky. 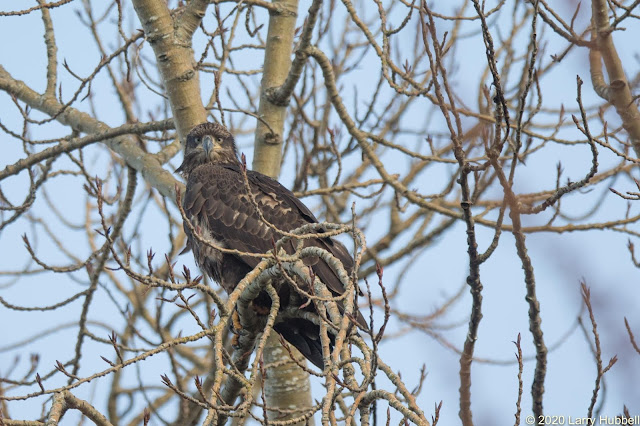 During the last few weeks, there have been as many as five Bald Eagles in the cottonwood tree on the north end of Foster Island. Most of them appear to be immature, like this one, which is most likely a second-year eagle. From the second through the fourth year immature eagles are generally as large as adults, but size does not translate to skill. Mature eagles must learn to be capable hunters in order to feed themselves and their hungry offspring.

This secondary hunting roost on Foster Island typically belongs to Eva and Albert. It is also shown on the Union Bay Map. 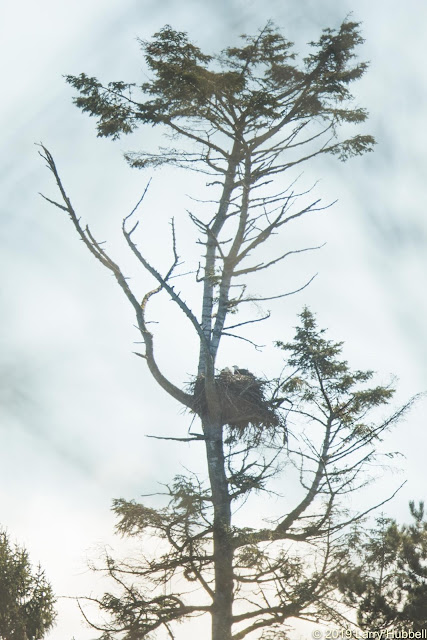 Eva and Albert are the local Bald Eagles that nest in Broadmoor on the south side of Union Bay. They generally defend Foster Island, the 520 light posts, Duck Bay and the Arboretum.

I suspect the five eagles are hungry transient eagles stopping by to hunt for food. Last Saturday, as we watched, one of the young flew out over the bay and dived at American Coots. Finally, it wore itself out and gave up. I have seen adults fly out over the bay, pick off some food and return with no visible delay. 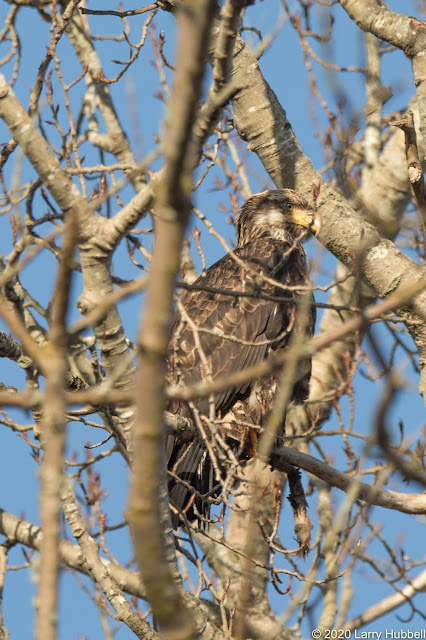 The young are not all the same age. This one looks like it may have an eyestripe indicating it is most likely a third-year Bald Eagle.

Last Saturday, I believe I saw Eva and Albert circling overhead high above the transient eagles. I suspect the reason they did not attempt to drive them out of their territory is simply a matter of numbers.

This week's best example of an eagle exerting its influence, when the odds were in its favor, was sent in by Jeff Graham. 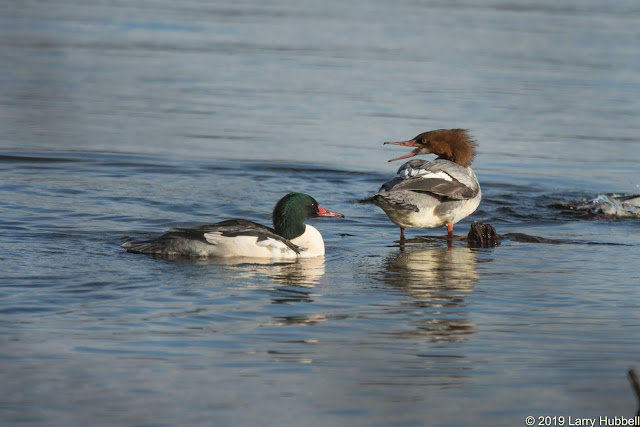 A male Common Merganser, on the left, approaching a female.

Jeff sent in the following photos and reported, "...A common merganser came up with a fairly large fish. Just then a gull aggressively flew at it and the merganser dropped the fish. 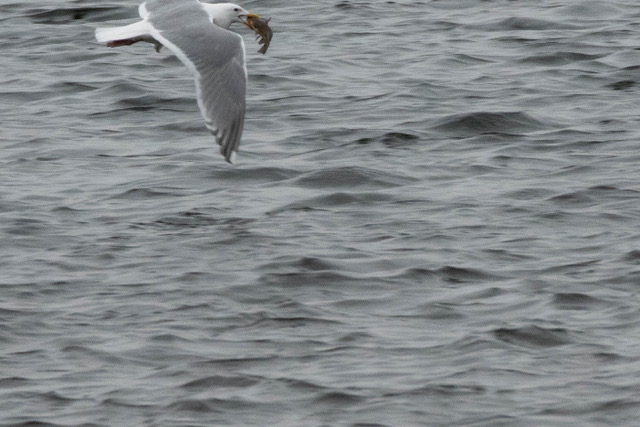 The gull plucked it out of the water. It flew over to the dock just off the boat rental building. 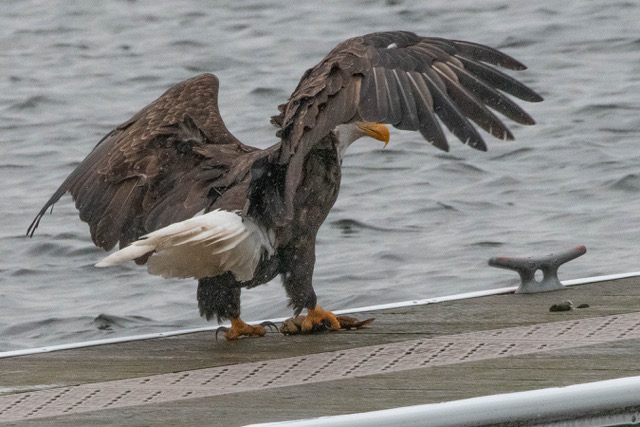 A mature eagle flew right at the gull and the gull dropped the fish on the dock. 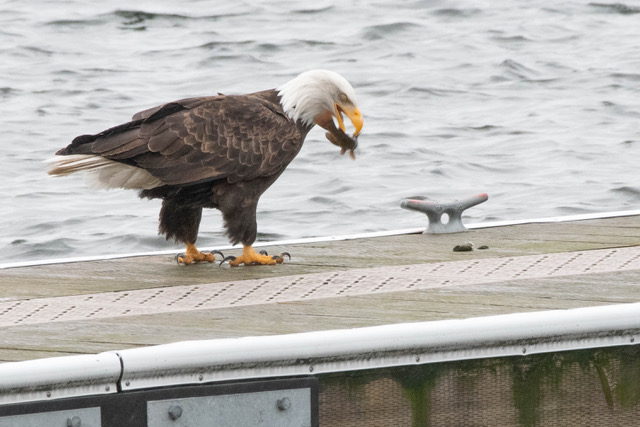 The eagle came down and ate the fish. So interesting to watch....The eagle flew off to the nest tree across the Cut when it was done eating."

The Bald Eagle in Jeff's photos was operating in Monty and Marsha's territory. It flew to their nesting tree and sure looks like Marsha to me.

By the way, Marsha and Monty's nest site is optimally placed because the complete Lake Washington watershed drains through Montlake Cut. This means all seagoing fish that enter or exit the watershed must pass below Monty and Marsha's nest. Looking down from a hundred feet in the air, with the sun behind you must make the migrates quite easy to see.

When it comes to nest building Monty and Marsha may not be engineering geniuses but in regards to site selection, they are certainly sitting on the upper side of the bell curve. Mature Bald Eagles often catch prey on the first pass, consistently extort fish from smaller birds and carefully choose when to defend their territories. It may be impossible to accurately estimate an eagle's IQ, but it is obvious they calculate optimal odds with ease. 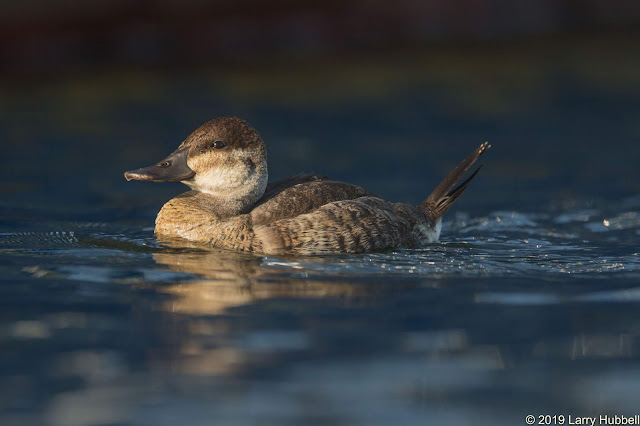 What species of duck is this? Is it native to our area?

Ruddy Duck: This is the more subtly-colored female of the species. The shape of the female is virtually the same as that of the male. Both, have a relatively large head and bill with a fairly long and stiff tail. They are native to Washington and most common in our area in the Winter. 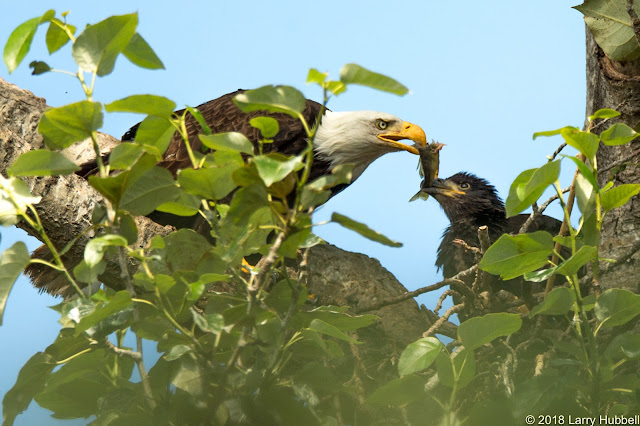 This is Marsha, in 2018, feeding a fishtail to one of her young in the nest.