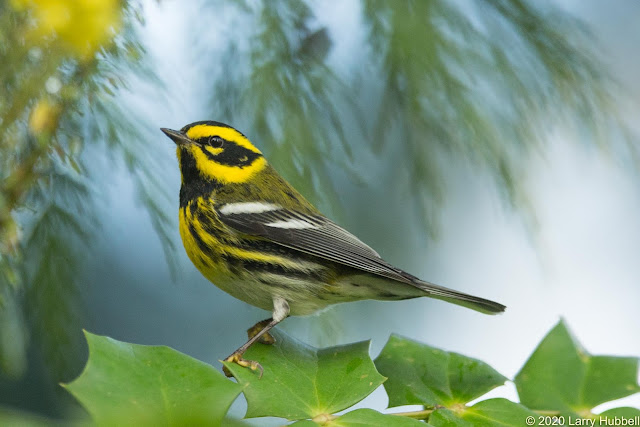 The male Townsend's Warbler might be the least frog-like bird on the planet. The exquisite alternation of black and yellow is so eye-catching that the green on the back is hard to notice. From a physical perspective, this small patch of green may be the only thing about this bird that sort of resembles a frog. 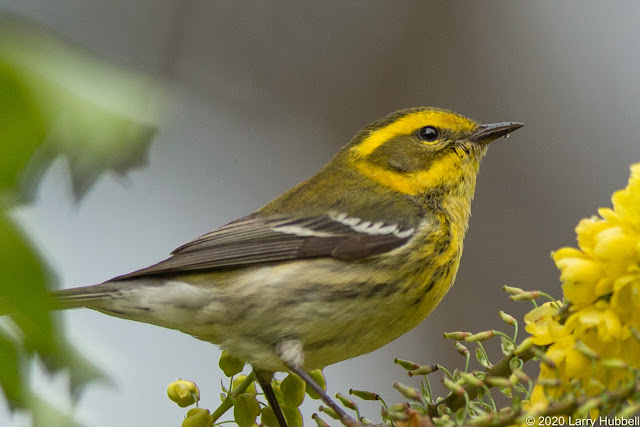 The female (and immature birds of either gender) have additional green coloring in many places, often where the males have black. The throat is an exception. It is black in the mature males but in the others, it is mostly yellow. For more gender comparisons, and a link to the history of this unique winter-flowering Mahonia, visit the 2018 post entitled, 'Living Sunshine'. 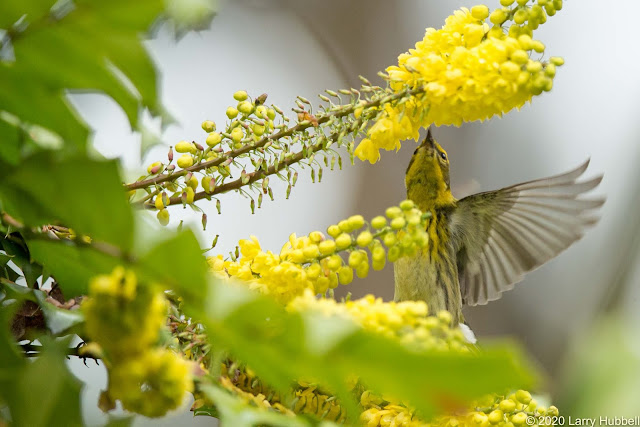 Curiously, of all their body parts it is their wings that may have the closest connection to the concept of leapfrogging. While you ponder that, try not to imagine frogs with wings. 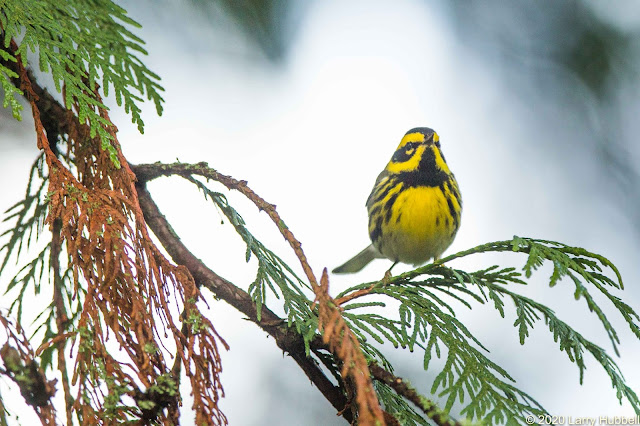 Here is an example of a mature male's black throat.


According to Birdweb, in the winter, Townsend's Warblers are uncommon around Puget Sound. However, among neighbors who live near the Arboretum, a number report seeing these warblers at their feeders. Also, whenever watching the hummingbirds in the winter-blooming Mahonia, it is not surprising to see one of the Townsend's Warbler wandering through the blossoms. 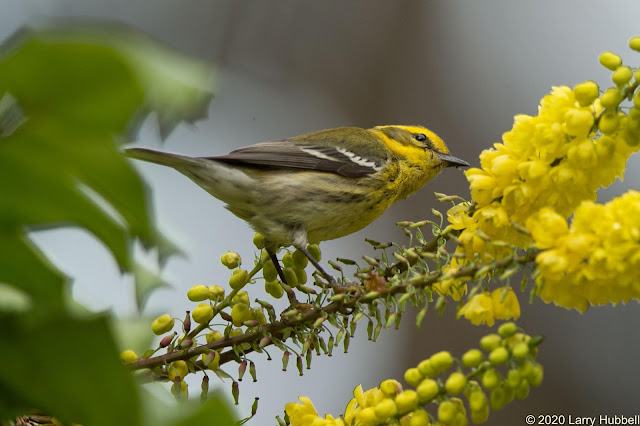 Hummingbirds hang in the air while feeding at the blossoms and then in a flash, they zip to the next flower or chase a competitor away. The warblers on the other hand land before quickly inspecting the blossoms for small creatures. Soon, they flutter and leap to the next flower. Using peripheral vision, a flash of motion suggests a hummingbird while a bouncing blossom or branch generally indicates a warbler. 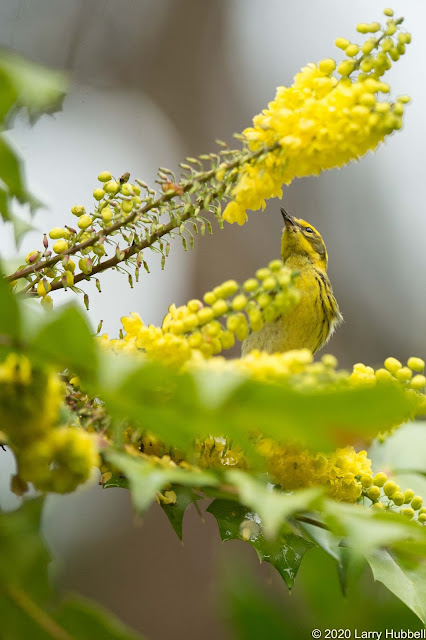 The warblers do not linger long. They either find food or not and in a moment they're gone. 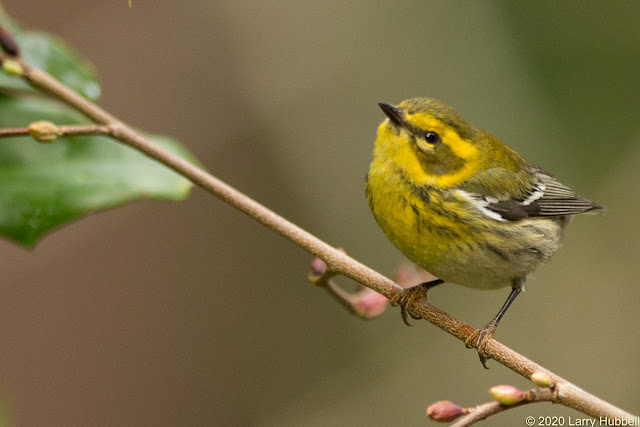 The insects they find must be very small as I never see what they eat. 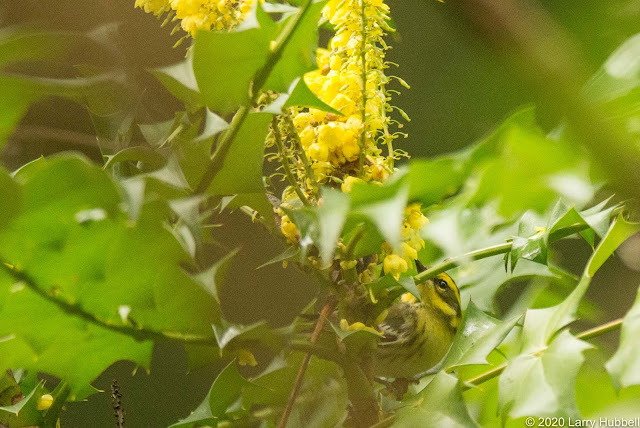 Since spotting the bird is a bit of a challenge, it is not surprising that photographing their food is even more difficult - maybe next year.

By the way, did the comment about frogs-with-wings make you think of bats? Just curious, whether anyone else made that connection. Frogs are amphibians and bats are mammals, still, maybe it's the bat's featherless wings that seem almost fitting for a frog. 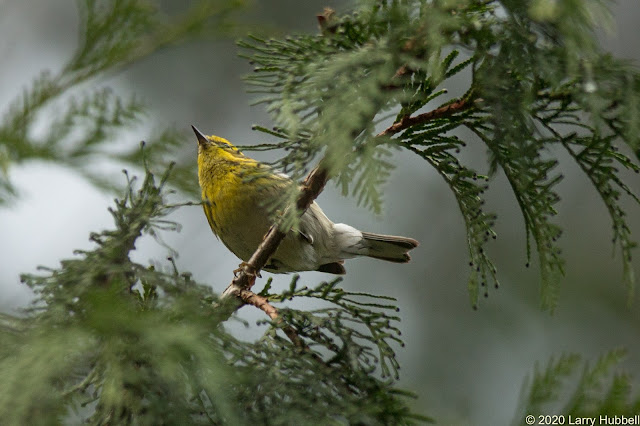 Not only do the warblers eat small creatures, but sometimes they feed on honeydew. Honeydew is the sugary excretion provided by scale insects that consume sap from plants. Apparently, the sap contains more sugar than the insects need. So they pass the excess while searching for other required nutrients. (It would sure be handy if human bodies had this ability.)  All About Birds. says Townsend's Warblers primarily find honeydew-producing insects on oak trees.

In the book, Where Song Began, the author, Tim Low, mentions that honeydew, and similar substances, are produced in such volumes in Australia that birds large and small become quite aggressive about it.

It turns out the leapfrogging connection to wings is related to migration.

Birds of North America (citation below) mentions that there are at least two different migration patterns among Townsend's Warblers. Curiously, virtually all of these warblers migrate and breed in the western part of North America. In the U.S. these birds are most generally found between the Pacific Coast and the crest of the Rocky Mountains. During warm weather, they reproduce as far north as British Columbia and even south, central Alaska. During cold weather, they winter as far south as Costa Rica and throughout much of Mexico. This highlighted link will take you to the All About Birds Range Map. It is a bit more precise than my verbal description.

There is still much to learn about Townsend's Warblers. There may be additional migration patterns that still need to be studied and understood. In any case, I find it fascinating that long wings are a waste of resources for the less adventurous birds, At the same time, they are a plus for those birds involved in the lengthy migration, which leapfrogs past the shorter-winged warblers of the same species. 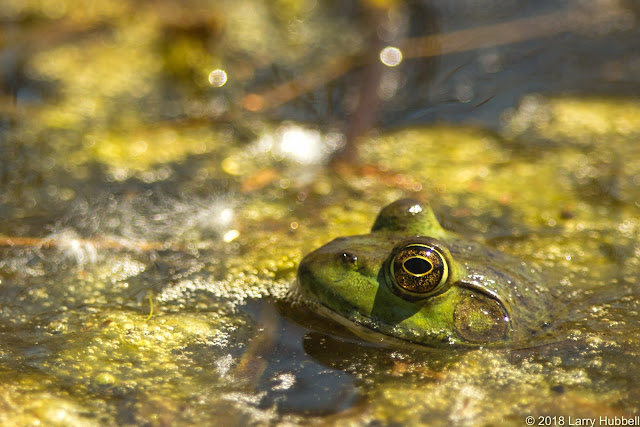 What species of frog is this? Is it native to our area?

American Bullfrog: They are native to the eastern portion of North America. They are invasive in Union Bay and will eat smaller native frogs and other aquatic creatures. On the plus side, they provide a larger meal for the native herons. The ridge behind the eye, curving down around the 'ear-like' structure is a key for identification. 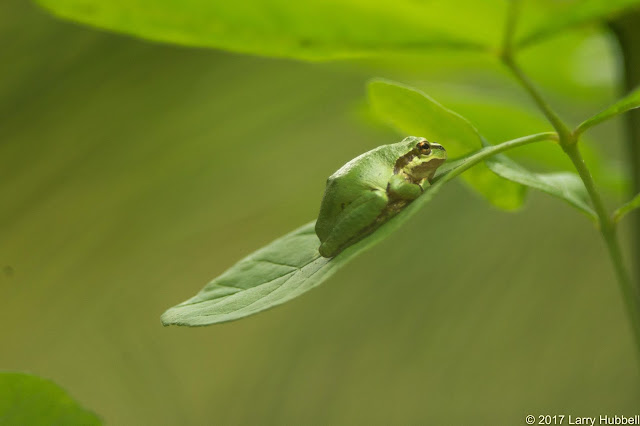 This is a native Pacific Tree Frog. They are about one inch long. It was photographed on Foster Island. (I am guessing that the depth of the Bullfrog's mouth opening, from front to back, is also about one inch.)

Posted by Larry Hubbell at 1:09 PM