The Raven and I exchanged glances at a great distance..

This week, for the first time in my life, I saw Ravens in the Arboretum. I was awe-struck. Words cannot explain my excitement, wonder, and reverence. I was lucky enough to see them on three consecutive days. It was like watching a myth come to life.

Native Americans from the Pacific Northwest chose the Raven as the creator of the earth, the moon, and humanity. They also recognized the Raven's intelligence, referring to it to as, The Trickster. You can experience much more about The Raven and its relationship with the native Pacific Northwest culture at the Tillicum Village production on Blake Island.

As the European culture expanded across North American Ravens learned to avoid humans. Unlike salmon, the Ravens were smart enough and capable enough to retire to more isolated regions. During my lifetime I have generally seen Ravens in areas like The Olympics, Crystal Ski Area, Snoqualmie Pass and near the Skagit River delta.

However, there are reports that Ravens are beginning to reappear in urban environments. Wild creatures are constantly striving and fighting to find new food sources and safe locations to raise their young. It will be interesting to see if the Ravens in the Arboretum find everything they need to become our permanent neighbors.

I suspect these two Ravens are a new pair, searching for a territory of their own. From a habitat perspective, the tall native trees of the Arboretum have attracted their attention. The next question is, Will they find an adequate supply of food?

Ravens are omnivores. They will eat anything from fruit, eggs, and insects, to a vast variety of small creatures including roadkill. Anything we can do to help the smaller creatures thrive will ultimately benefit the Ravens.

Local residents can help by: 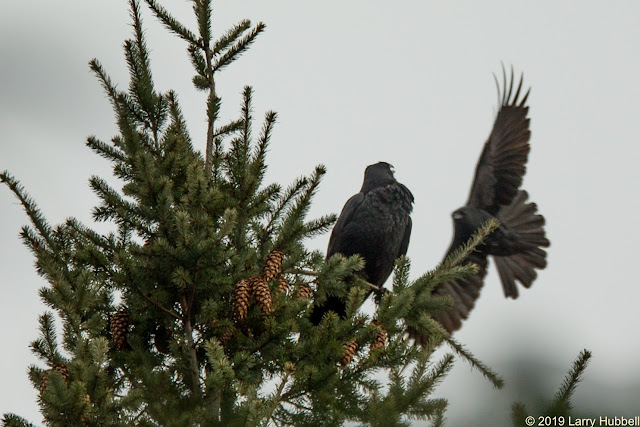 A very common question is, How can you tell a Raven from Crow? There is a size difference. However, unless you see them close together it can be hard to judge. Crows generally weigh around a pound while Ravens can weigh up to four times as much. In this photo, the Raven is seated and the Crow is darting in to harass it. Also, note the shape of the Crow's tail. 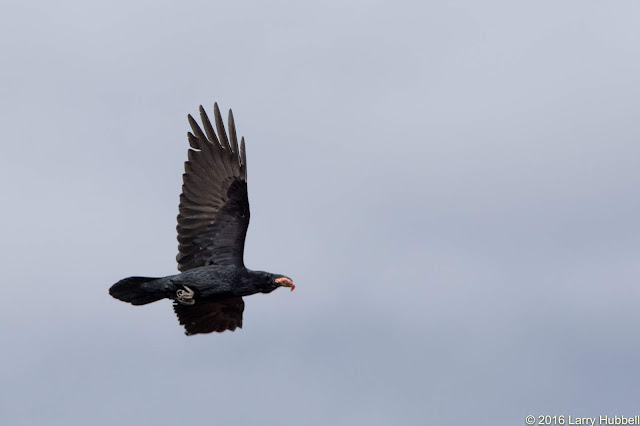 Ravens, particularly in-flight, often display more of a diamond-shaped tail as opposed to the fan-shaped tail of a Crow. Although, at normal angles, the shape can be hard to judge. Raven's wings are also relatively longer and less rounded. You can easily compare with the previous photo.

Ravens have a much deeper voice. I hear 'Grawk' instead of the higher pitched 'Caw' of a Crow.

The first recording is the 'standard' sound of a Raven. The last recording is amazingly different. The first time I heard it in the wild I had great difficulty believing it came from a Raven - even though I was looking directly at the Raven at the time. 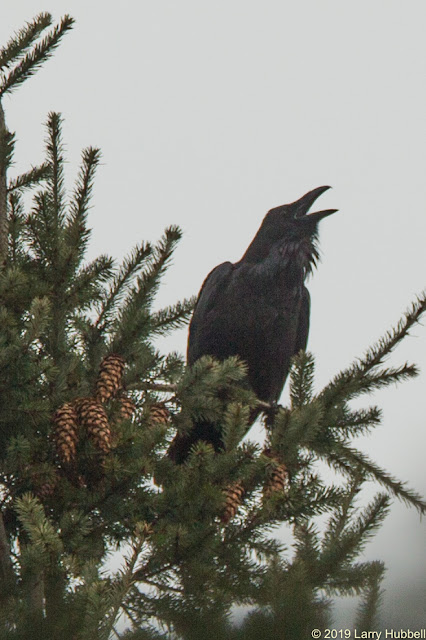 Ravens can display obvious hackles. The long feathers extending out from the neck. These can be raised although when they are lowered they are basically invisible. In this case, the Raven's hackles were raised because it was irritated by the crow's harassment. 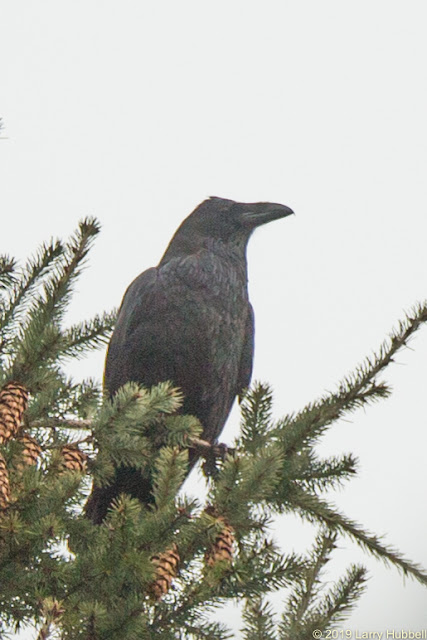 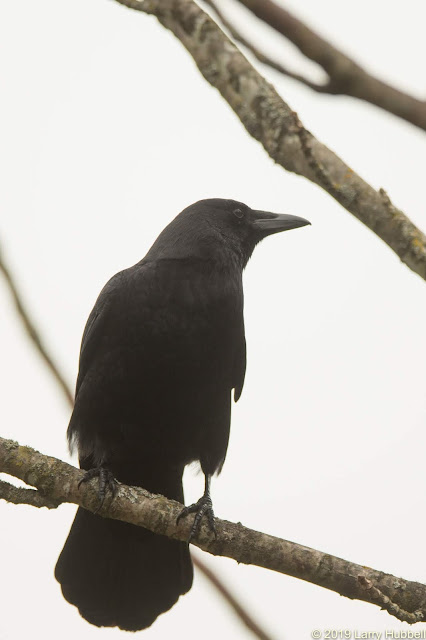 With Crows, the tapering begins at the head and the angle continues quite consistently all the way to the end.

Good Luck! I certainly hope you get the chance to hear and see Ravens in the Arboretum! 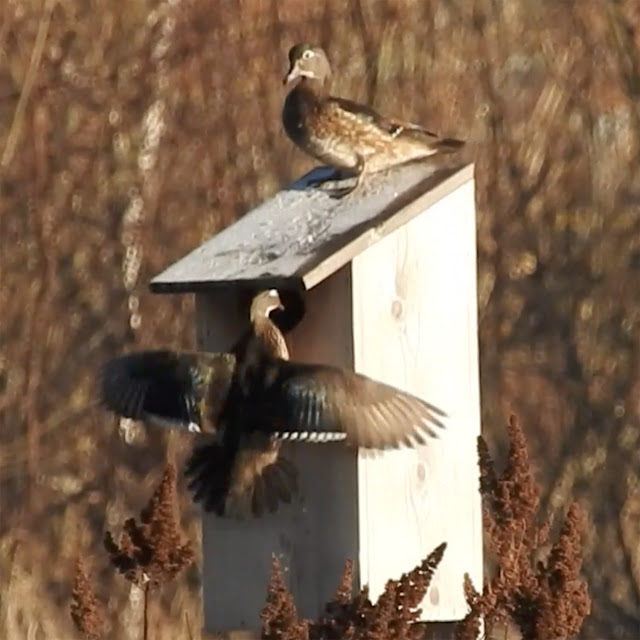 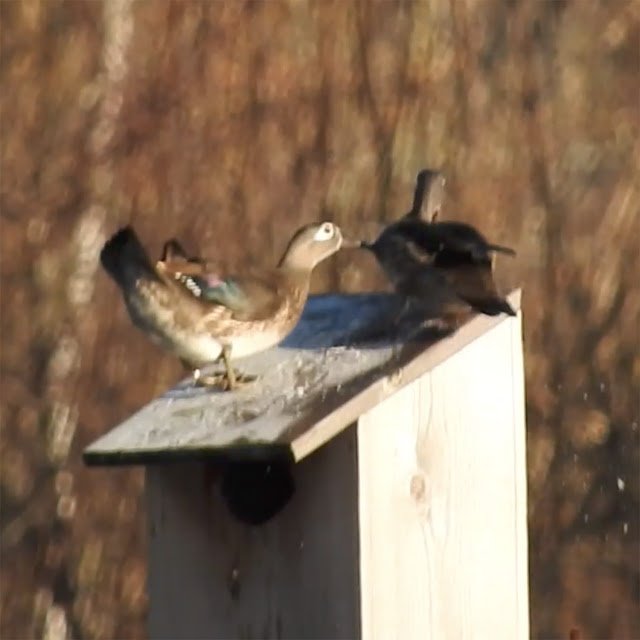 There can be only one - at least for the moment. 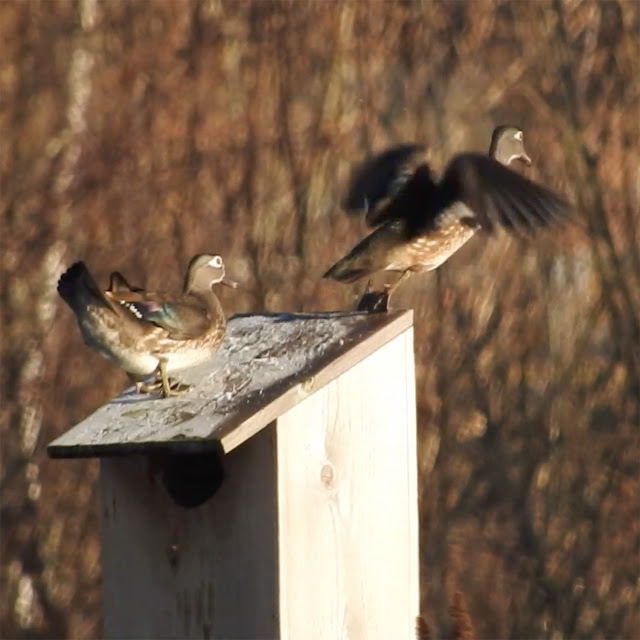 The second hen won the battle but not the war. 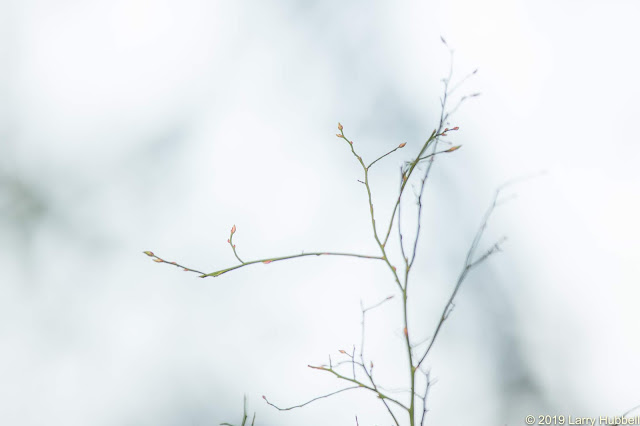 Which native berry will this plant produce? I realize this may seem like an absurdly difficult challenge. However, during the Spring, when plants are just starting to bud, people often begin their gardening and planting. If we are to retain native plants we must learn to identify them even without their berries and leaves. In this case, look closely at the delicate habit of this plant. I believe it is really quite unique among native berries. 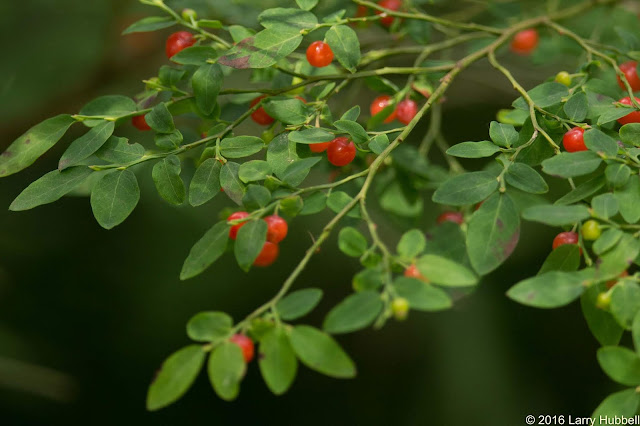 This is one of my favorite natives plants. Its light and delicate appearance can be savored just as much as the taste of its fruit.