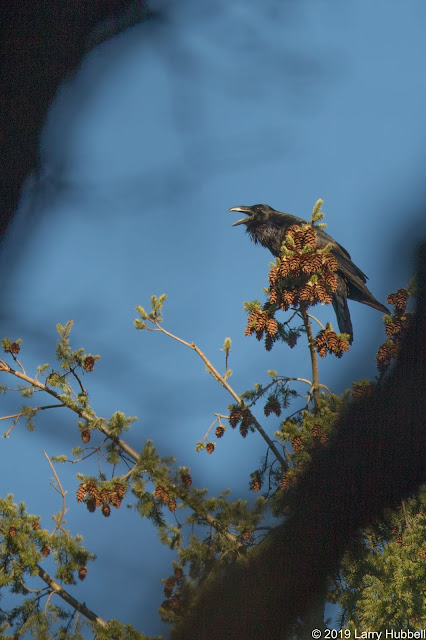 The post, The Mythical Raven, was inspired by my first-ever sighting of a Raven in the Arboretum. Both of which took place in March of this year. That initial post documented many of the critical differences between Common Ravens and American Crows. 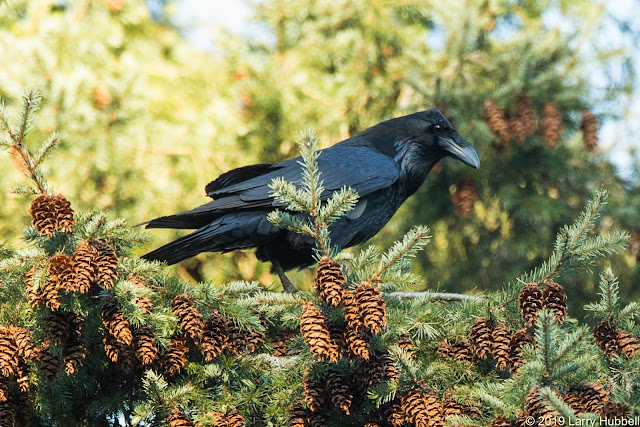 During the following week, I spotted Ravens in the Arboretum, twice. However, it wasn't until this week, that I noticed an additional difference between the two species. If you look closely at the top of this Common Raven's bill you can see that the feathering near the forehead extends approximately halfway to the tip of the bill. 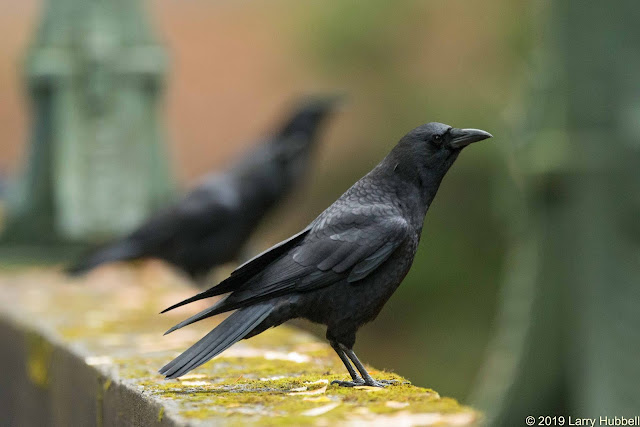 With an American Crow, the 'forehead' feathering reaches less than a third of the way to the tip. When the light is right, and especially with binoculars, this difference is quite obvious.

The bill-size versus the size of the head is a bit more subtle. It seems as though the primary purpose of a Raven's head is to provide a site for holding the massive bill. With Crows, the opposite seems true. The head appears to be the larger more important body part, while the bill seems like a supporting actor. 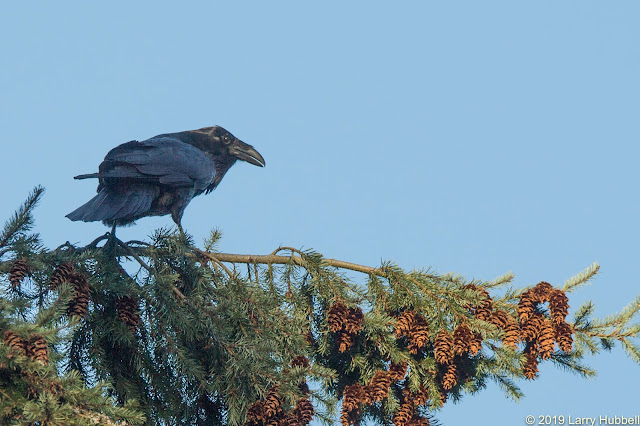 Even without seeing the relative size of the bird, the shape of an extended tail, the length of the wings or hearing its voice, there should be no question in your mind which species is in this photo. 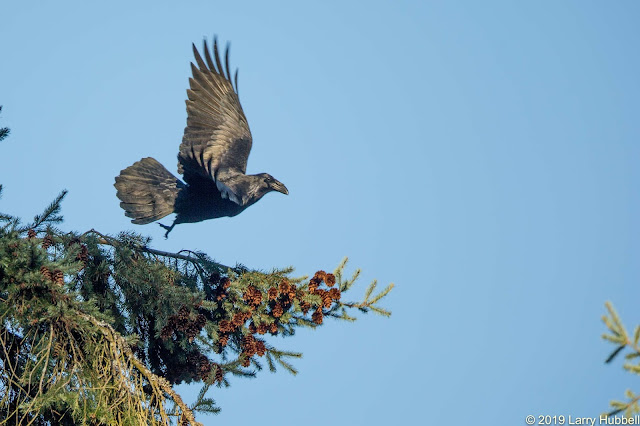 As the Raven took flight, it partially displayed its diamond or wedge-shaped tail, which is distinctly different from the fan-shape of a Crow's tail. 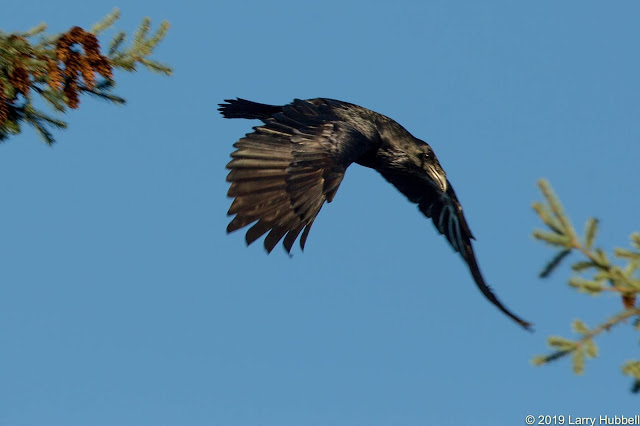 Back in March, the primary, Raven-related questions on my mind were, Will they stay? Will they establish a territory? Will they build a nest and raise young? 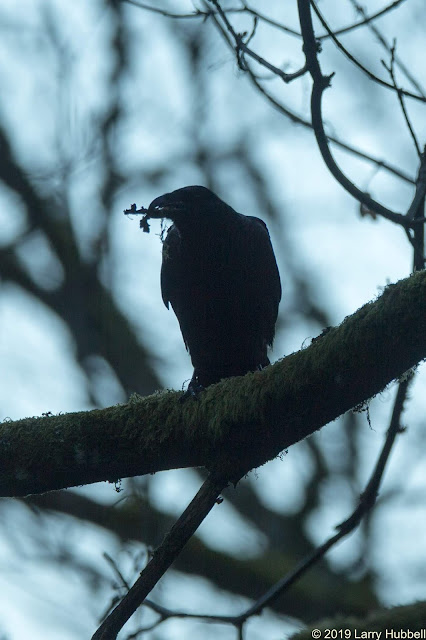 Later, on the same day, I caught a filtered glimpse of one of them with a small twig in its mouth. I was hoping that it might be a sign of nest building. 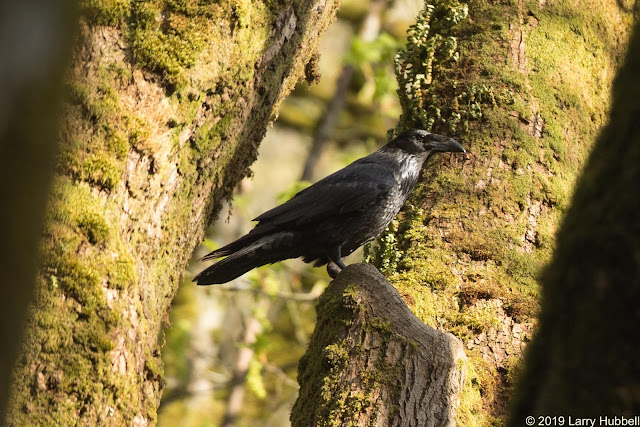 My next sighting was roughly two weeks later in Interlaken Park. 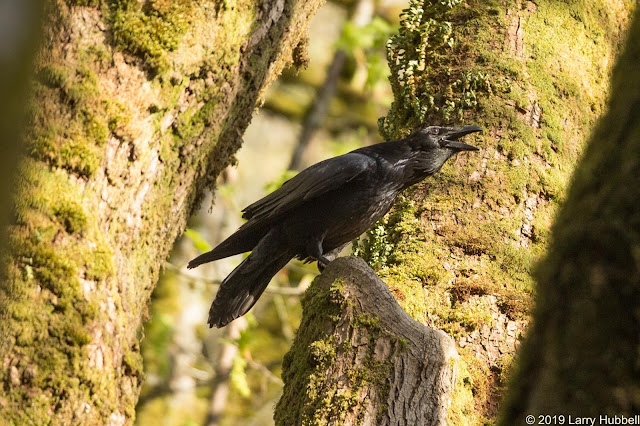 Whenever I see a Raven it always seems like I hear it first. They are obviously intelligent and very careful, but they are also act shy. If they notice me watching them they tend to immediately move to a more hidden position. It is hard to understand why they are both consistently vocal and shy. 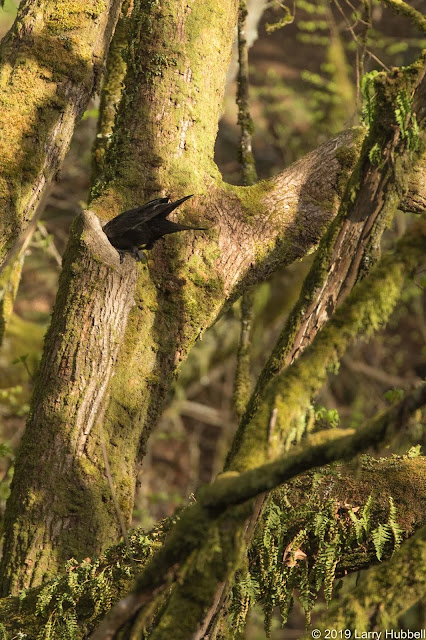 One of the special things about Interlaken Park is the slope. It is easy to stand at the edge of the park and look horizontally into the upper canopy which rises up out of the ravine. In this case, the Raven found a decomposing hole, most likely where a branch broke off years before. The Raven appeared to be inspecting the interior for small, tasty inhabitants. 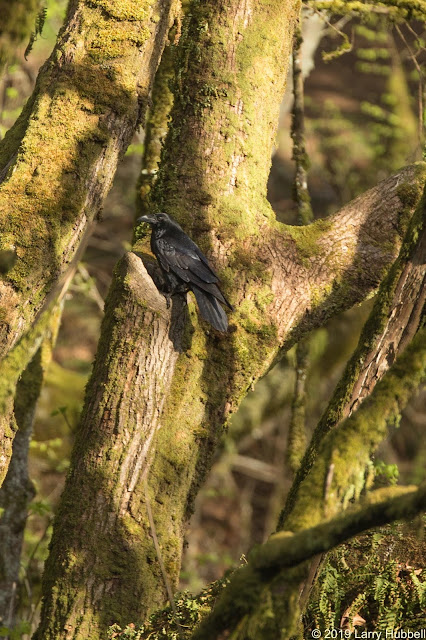 The distance was such that I could not determine if the mission was successful or not. 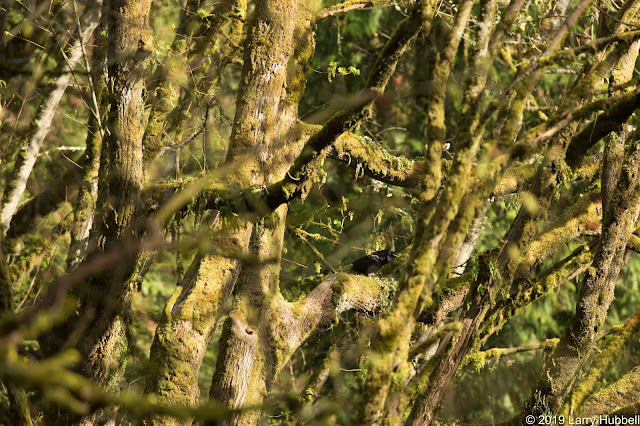 There is certainly something magical about the untended beauty of Licorice ferns hanging from the moss-covered branches of Big-leaf Maple trees. The Raven apparently felt right at home. 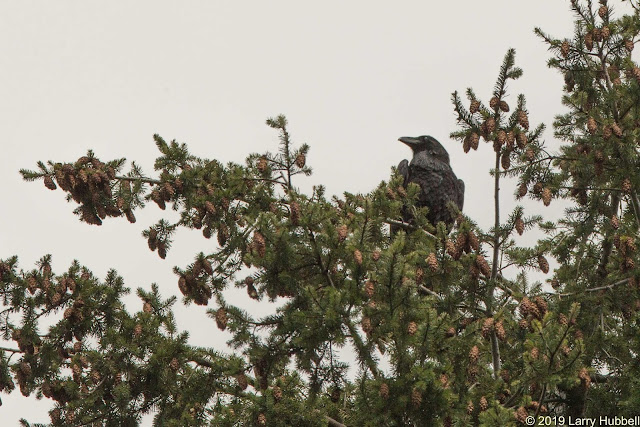 About a week later, in mid-April, I took my last Spring photo of a Raven. It was in the Arboretum. I heard them at least once more passing west over Interlaken Park at the close of the day. Throughout the bulk of the summer, I did not see or hear Ravens anywhere in the Montlake or Union Bay neighborhoods. 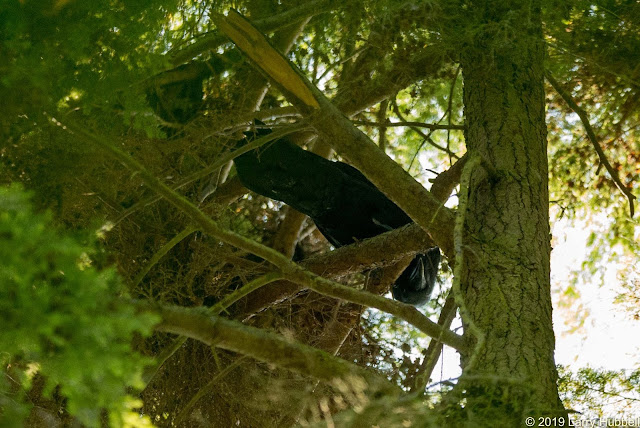 On September 6th, I caught my first Fall photo of a Raven, also in the Arboretum. Apparently, it was inspecting the bottom side of the branch for food. 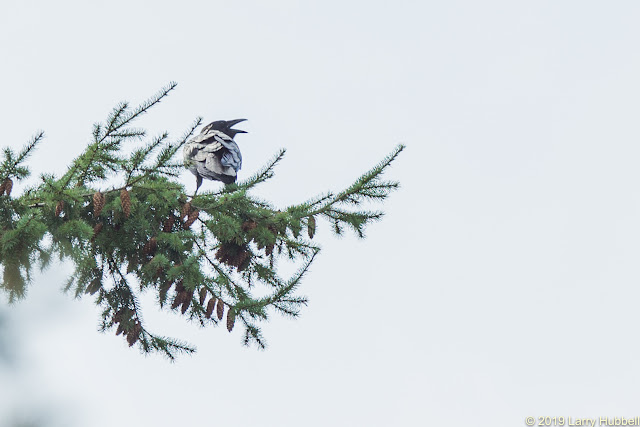 In mid-September, I saw another one. 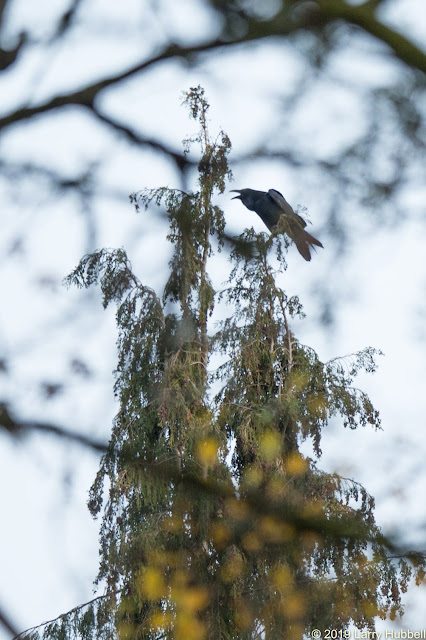 Last week, I caught a distant photo as one called out. 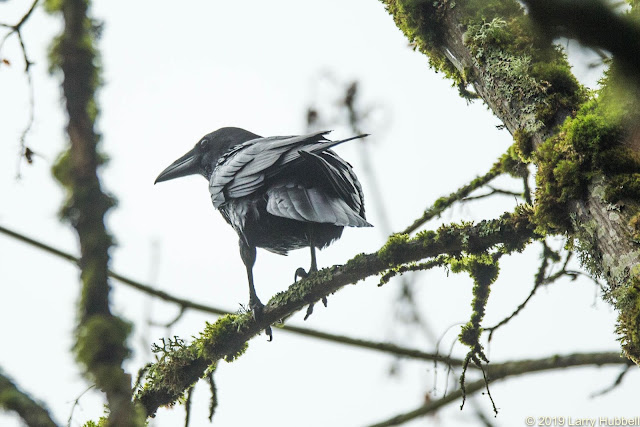 This week, I have seen them multiple times. 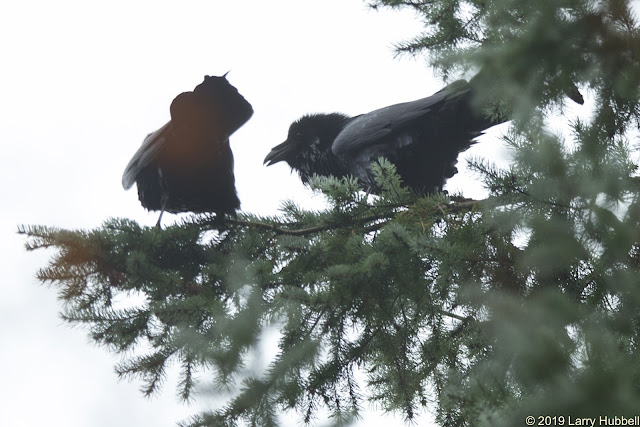 On Thursday, the Raven on the left was sitting on the branch when it was approached by the bird on the right. As the second Raven flew in towards the perched bird it was calling out. However, the sound was not their normal call. The sound was most similar to a high-pitched hiccuping. You can hear a similar Raven call by playing the last recording on All About Birds > Click Here. (The first recording is their 'normal' call.)

I have not read anything which explains the purpose of the odd-sounding call. In this case, the approaching bird appeared to be focused and apparently speaking to the perched bird. The perched bird sat and listened for a few moments before silently gliding off to a nearby tree. I wonder if the response was an example of actions speaking louder than words. 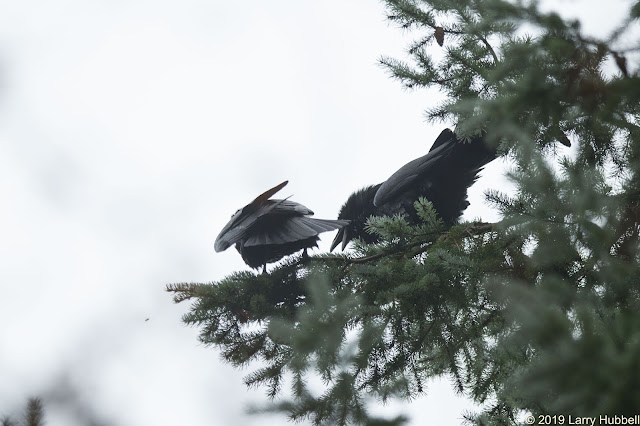 The return of the Ravens leaves me encouraged, curious and slightly apprehensive. On the positive side, their return makes me think this may be a young pair which is including the Arboretum in their initial territory. We may get to enjoy them as our newest neighbors for many years to come.

Speaking of messages of hope during a challenging time, you will want to read an incredible post on the blog of my friend Dan Pedersen, Click Here. 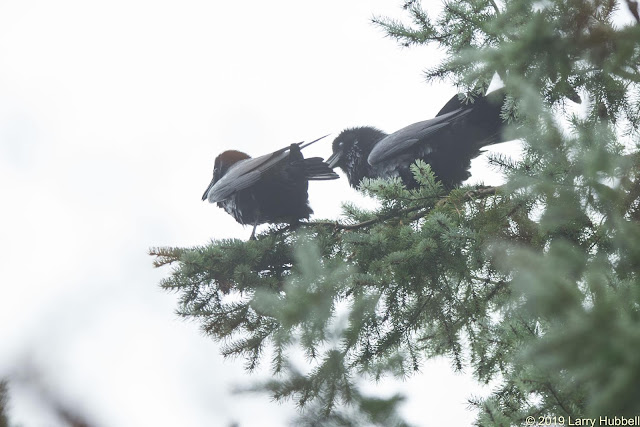 I am curious whether the Ravens built a nest this year. Although, I doubt it. I do feel fairly certain they did not build one in the Arboretum. I realize they are intelligent enough to work quietly and it is possible I might have overlooked their nest building. However, I doubt they could have had young in a nest and spent a month or two bringing food to the nest, especially, if the young birds were begging to be fed, without anyone noticing their presence. (All About Birds says they lay three to seven eggs.)

If they did nest this year, it seems likely it was somewhere other than the Arboretum. I would certainly like to know if you have seen more than two Ravens, at once, anywhere in the Montlake/Union Bay area. 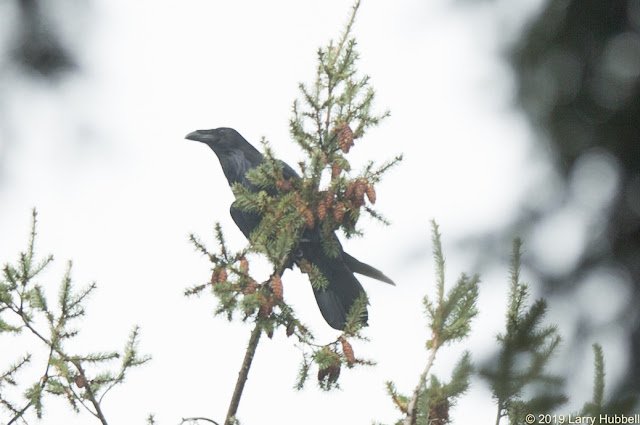 I suspect a young pair of Ravens might take a year, or maybe even more, to settle into a territory, build a nest, and successfully feed and raise young. Similar to how it took the new Osprey pair, on the north side of Union Bay, two years to complete their nest and raise their first offspring.

While I am excited to regularly see Ravens in our area, I am apprehensive about how a new set of predators may impact the local eco-system. A friend mentioned watching the Ravens chasing after a Barred Owl in the Arboretum this Fall. I have to wonder if Hawks, Owls, Eagles, and Ravens can all successfully nest, hunt, and coexist in and around the Arboretum. The Ravens will certainly add pressure on other smaller, non-predatory birds, especially during nesting.

One of the most important things we can do, to help Ravens successfully co-exist, is working to improve the local eco-system and the abundance of life it supports. If you are a King County resident one important way to help is to write an email to the King County Council members asking for approval of the latest grant request from Friends of Arboretum Creek (FOAC).

The FOAC design grant will determine the best method for reuniting Alder Creek with Arboretum Creek. More clean water in the stream will dramatically increase the potential for life in the Arboretum eco-system, while also increasing the capacity in the King County sewer. You can read about the project details by clicking on the highlighted link, above.

You can easily send a letter of support by copying our FOAC Sample Letter. The Council will be voting on this request in early December. Your timely support may make all the difference! 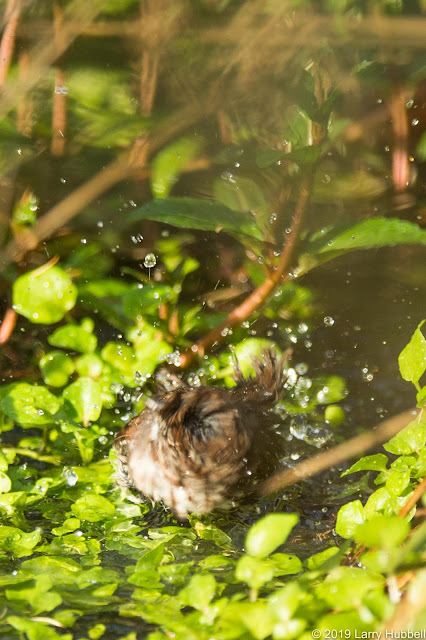 Is this bathing beauty native to Union Bay? 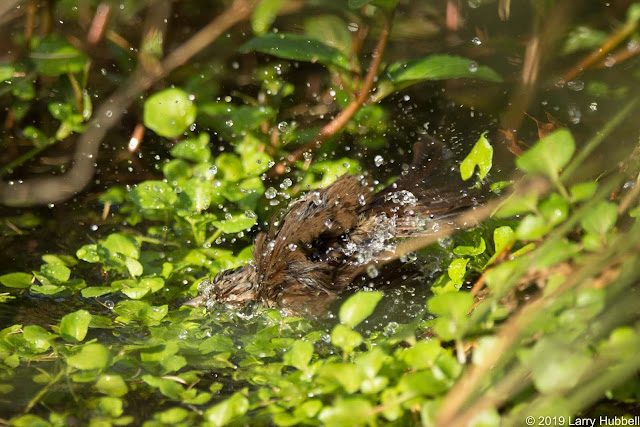 Here are a couple more photos to provide helpful hints. 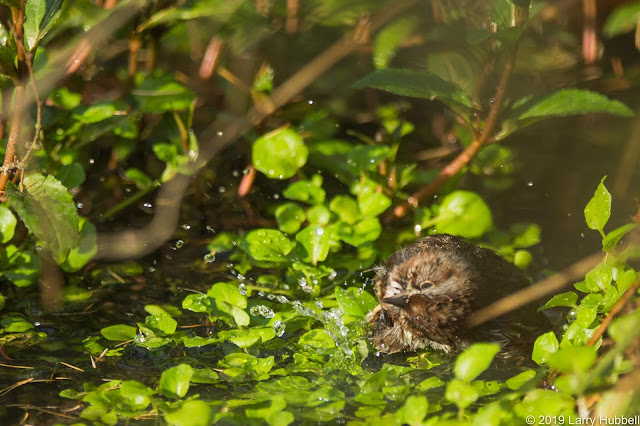 What species is it? 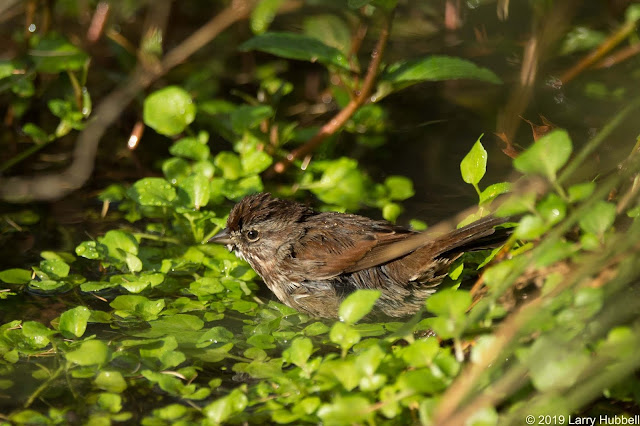 Song Sparrow: This is one of our most common native birds, however, it can be challenging to identify when it appears to be a brown blur in the middle of a cloud of water droplets. This one was bathing in Arboretum Creek, earlier this week.

Posted by Larry Hubbell at 1:11 PM