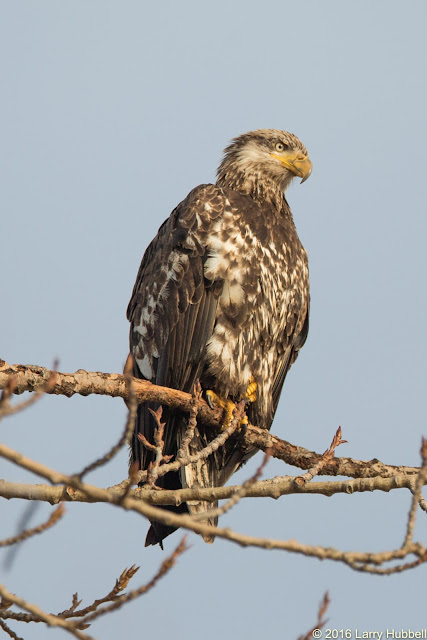 Yesterday, this bald eagle sat in a cottonwood just north of the Waterfront Activity Center (WAC). Its beak is turning yellow, its irises have lightened up, there is white showing on its head. This set of colors does not mean the eagle is over-the-hill and in need of an aerial, skywalker.

In fact, this is a relatively immature bird - in its third year. It is making progress, however it still has many feathers to replace before it reaches maturity. This combination of feather colors and especially its dark 'eye stripe', indicates the bird's age. Bald eagles can live into their thirties, so a three year old is quite young. 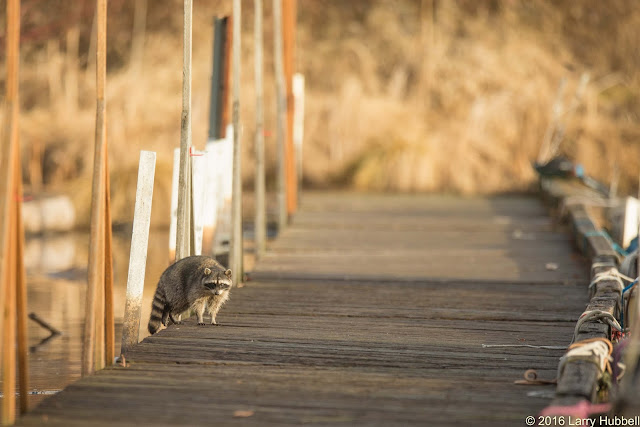 The eagle silently took notice of a raccoon crossing the dock below, before it refocused on the coots, wigeons and gadwalls feeding just offshore. The raccoon was favoring its right hind foot. Since it was only using three legs, Tripod, seemed like an appropriate name. Its appearance was only superior to the eagle in one area - its well defined eyestripe. (In the case of raccoons I do not think the eyestripe is much of an indication of age.)

Tripod swam to the little island directly offshore. After a brief foray Tripod swam to the next island to the north and then the next one after that. Given that Tripod is easily identifiable it should be easy for us to track him-or-her as s/he wanders around Union Bay. In particular, we may want to report Tripod to an animal shelter if s/he begins to look thin and in need of help. 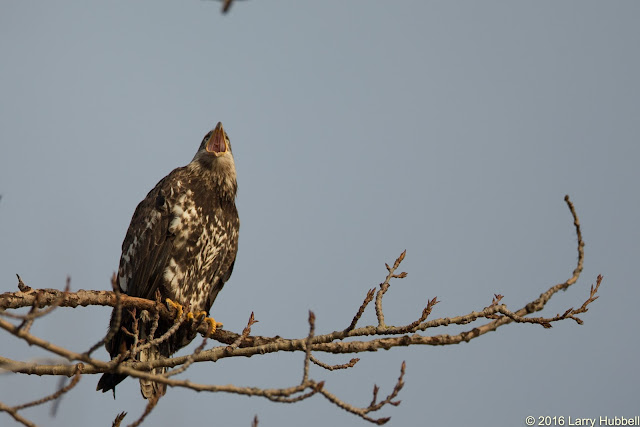 The only vocalization from the bald eagle was when another eagle approached. The loud, angry sounding call, seemed to say, 'This is my spot. Don't even think about slowing down!' The second eagle's steady wingbeats took it directly overhead and then north in the direction of the cormorants, which are almost always stationed above the UW baseball field.

While I was distracted by the raccoon the first eagle silently took flight. When I looked up a moment later it was no where to be found. 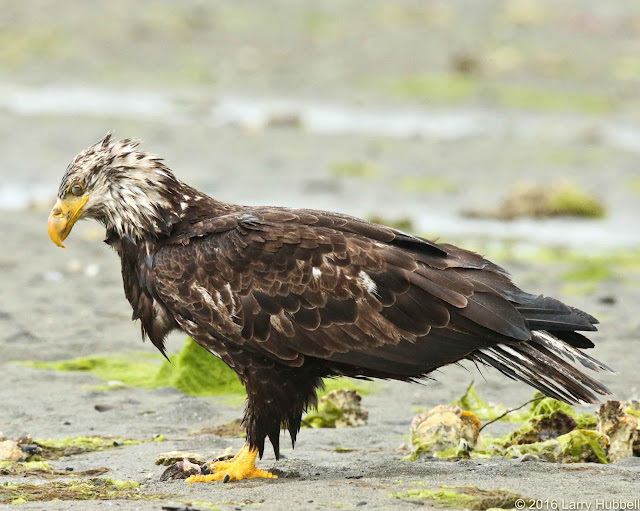 This older photo, from Hood Canal, shows a bald eagle in its fourth year - almost mature. The eyestripe is basically gone the white feathers on the body have been mostly replaced. Notice the variation in the brown body feathers. The darker feathers have spent less time exposed to sunshine, weather and rain, while the light brown feathers have slowly faded from exposure and age. On the head and tail the inverse is true. The older, darker feathers are being replaced by the white feathers which will ultimately indicate the bird's maturity. 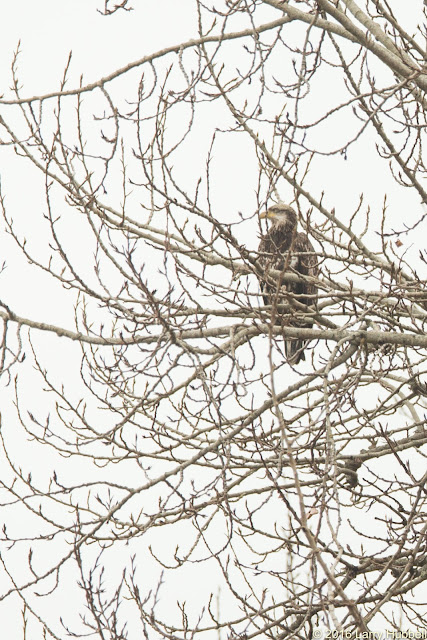 On Tuesday, I saw five young bald eagles sitting around Union Bay. This third year eagle, and another very much like it, were watching from the cottonwoods above the totem pole on the southeast corner of Montlake Cut. 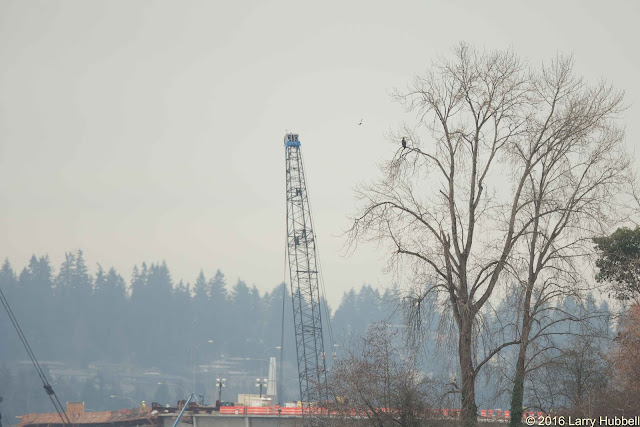 Another young eagle bird was stationed in the tree on the north end of Foster Island, apparently, unconcerned by the construction work. 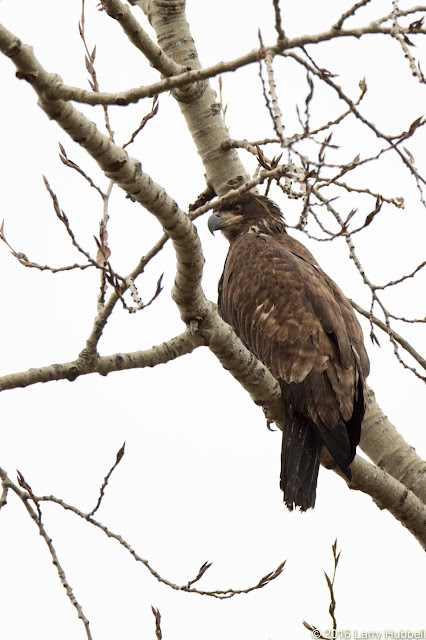 North of the WAC this first year bird was 'sharing' the cottonwood trees with a second year bird. It was sharing in the sense that it had a great view of the empty asphalt roadway between the Dempsy Center and the cottonwood trees. First year eagles have mostly dark beaks, dark eyes and mostly dark feathers. If you would like to see more in-depth coverage of a first year eagle - Click Here! 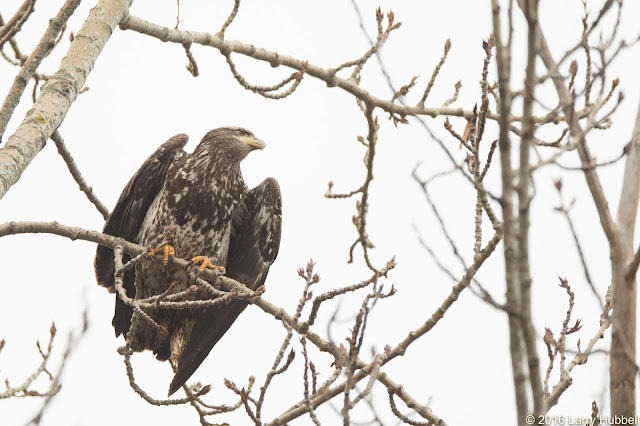 The second year bird had the more favorable shoreside seating. 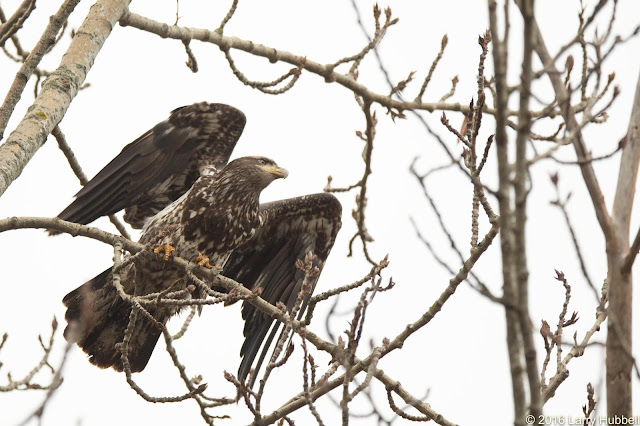 It would occasionally take off from its prime waterfront location and inspect the ducks who were feeding below. 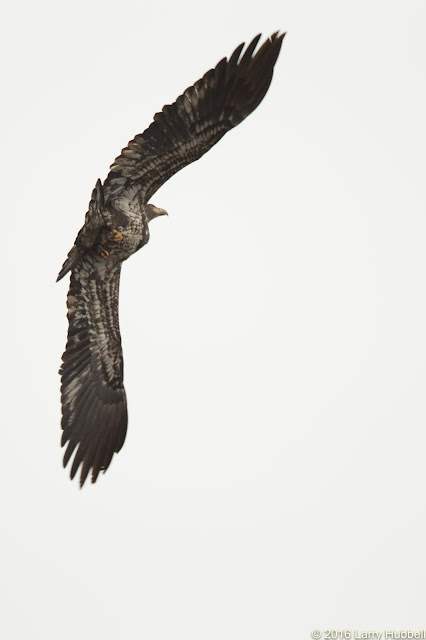 Curiously, just after it took off it seemed to slow up and turn vertically in the air. The only time I remember seeing eagles do this type of maneuver is when they are interacting with another bird, which usually is trying to attack them. 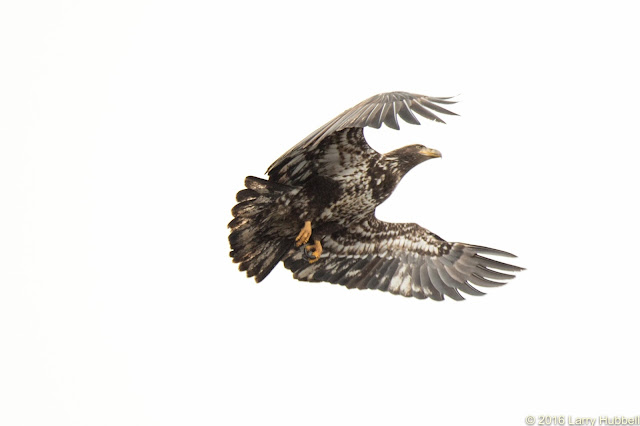 In this case there were no other birds nearby. My best guess is the eagle was watching another bald eagle far in the distance and maybe 'over-reacting' to some threatening behavior. 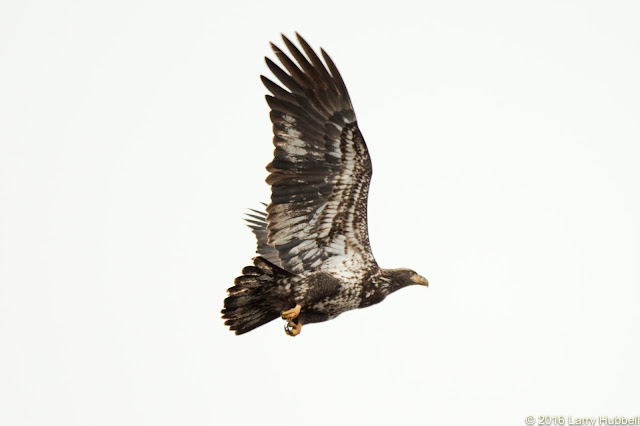 In any case, the young bird soon resumed normal flight. In addition to the multitude of white body and wing feathers this eagle also displayed some additional characteristics which are unique to a second year bird. Do you see the clues? 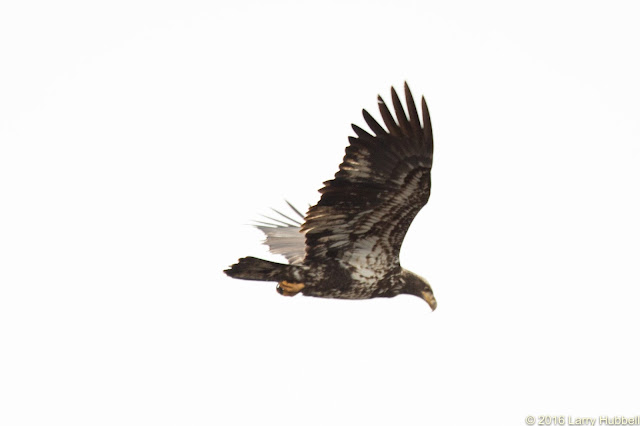 Whatever was bothering the eagle was momentarily forgotten as it passed over the ducks. It appeared to refocus on the concept of lunch. 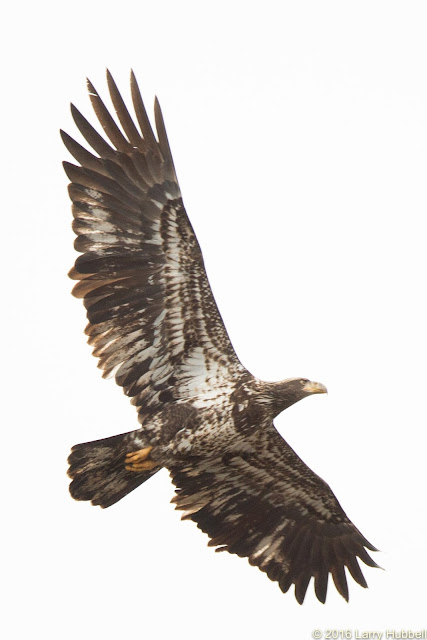 Not seeing any opportunities to its liking the eagle began to return to the cottonwoods. 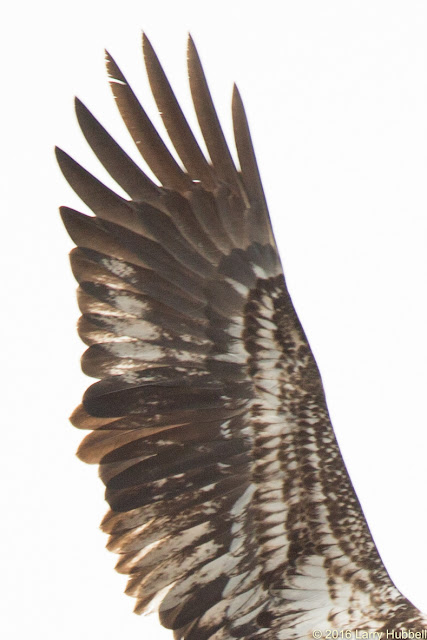 This close up of the eagle's right wing shows a number of interesting features. For instance if you look at the last half-a-dozen primary feathers, e.g. the feathers at the tip of the wing, you can see that they are notched. The bottom half of each feather is wider while the extended portion of each feather seems to suddenly shrink. This creates a finger-like look and provides the eagles with the means to fine tune their control of lift and airspeed.

The feathers which indicate the bird's age are related to the length of some of the other wing feathers. Eagles are so large and have so many feathers it takes them a couple of years to replace all of them. Curiously, their first year feathers are the longest set of feathers they ever own. Possibly, the extra length helps when they are first learning to fly.

In this case, you can see two light brown feathers and five white speckled wing feathers which are visibly longer than the newer, darker feathers. By the end of the eagle's second year all of the longer first year feathers will be gone. For this reason the uneven trailing edge of its wing's is indicative of an eagle in its second year. 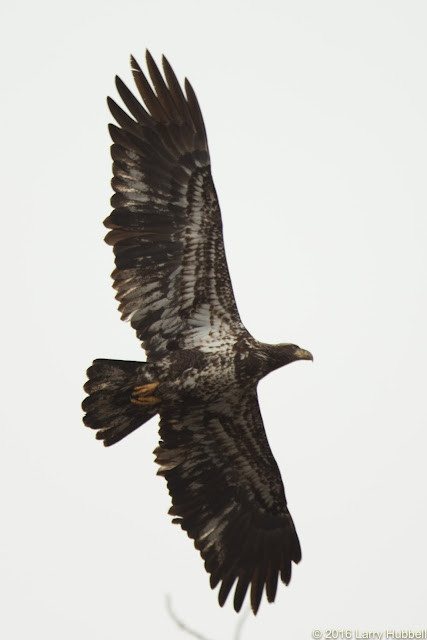 Both wings have a similar look although the number of older feathers on each wing does not appear to be consistent.

The young eagle returned to its prime real estate and continued to be highly observant.  My best guess is it was worried about a mature eagle showing up and sending it on its way, 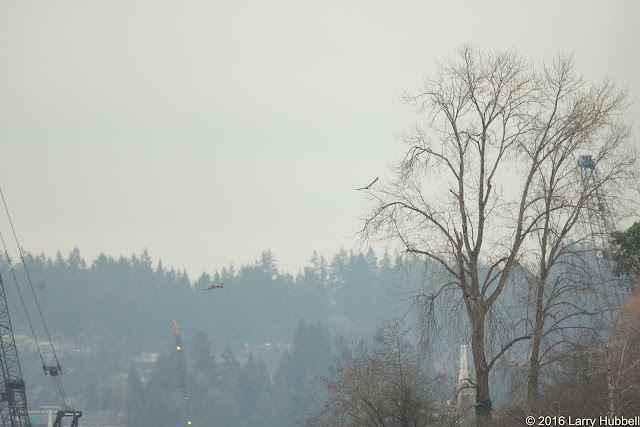 Perhaps this idea was inspired by one of the adult bald eagles which chased the young eagle out of the Foster Island cottonwood tree. The young eagle is just below the tree line about half between the tree and the crane on the left side of the photo. 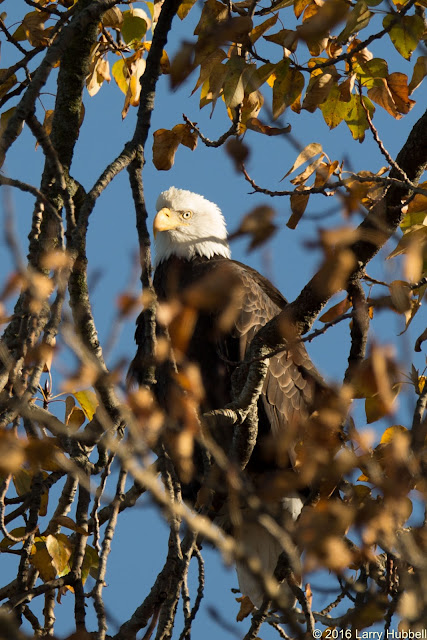 Once a bald eagle reaches maturity, around age 5, there is no longer any visual means to determine their age. This November photo from Foster Island is most likely Eva or Albert from the Broadmoor nest or possibly one of the adult eagles from the nest just north of Yesler Swamp.

Yesterday, while birding on Vashon Island, a member of our class pointed out an interesting immature bald eagle. Thank you, Lynne! The bald eagle was not a precise fit for any of the examples I have given in the post. Like the eagle at the beginning of this post it had light colored irises, however unlike my first example the bald eagle which we encountered had a completely mature looking yellow bill and a head which was nearly perfectly white - except for an eyestripe. The eyestripe was getting lighter at both ends and Master Birder Penny Rose stated that this particular bird was most likely a fourth-year eagle. Penny went on to explain that there can be individual variations in the manner in which eagle's mature.

Clearly, to some degree, bald eagles can mature at different speeds and in their own individual way - just like humans. Please use the examples given in this post as a rule of thumb. Don't forget to examine each individual eagle carefully, be aware that variations are possible and always be open to seeing something you have never seen before. Thank you, Penny!

Have great day on Union Bay...where the eagles are aging right before our eyes.

Without a functional Environmental Protection Agency, each of us will need to be even more vigilant in protecting our local environments. Native plants and trees encourage the largest diversity of lifeforms because of their long intertwined history with local creatures. I have been told that even the microbes in the soil are native to each local landscape. My hope is that we can inspire ourselves, our neighbors and local businesses to plant native at every opportunity. (Does anyone know who we should contact to inspire the use native shrubs and plants at the next Light Rail Station?)

My intention is to include at least one photo each week and visually challenge us to know the difference between native and non-native lifeforms. Here is a simple start: 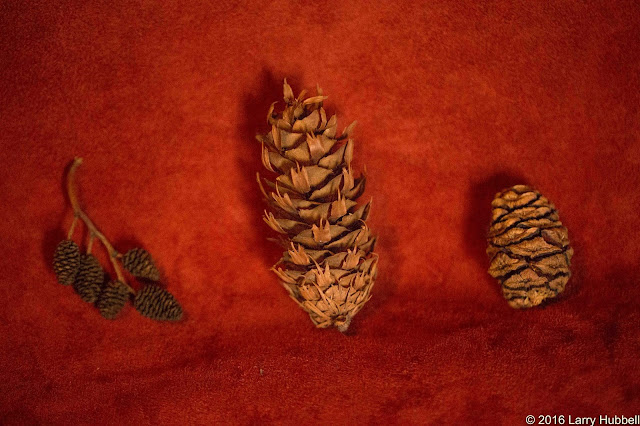 What trees do these cones come from and which are native to the Pacific Northwest?

One of the most useful documents I have found is:

Native Plants for the Lively Garden in Puget Sound Country

Following the link will bring you to a printable, online copy of the information. This wonderful document was written by Russell Link and is provided via the Seattle Audubon Society (SAS). Thank you to both Russell and SAS.

The clump of cones on the left are from a native Red Alder. These trees take nitrogen from the air and convert it so it can be used in the soil. They make the soil healthier for a wide variety of plants.

Also, the only trees I have seen our local pileated woodpeckers nesting in have been Red Alder. Large old alders decompose nicely and provide the perfect fit for these wonderful birds. In turn the pileated woodpeckers provide holes, homes and nests, for dozens of native creatures who are unable to excavate their own sites. Each year we need a new set of alders planted somewhere around Union Bay to insure future pileated woodpecker nesting sites.

The cone in the center is from a native Douglas Fir tree. The Douglas Fir is the most common tree in the Pacific Northwest. It is hard to spend much time under a mature Douglas Fir without seeing multiple native birds and creatures searching the tree for food.

The cone on the right is from a Giant Sequoia. The trees are wonderful and the wood is very durable - however they are native to California where they fit very nicely with the local flora and fauna.