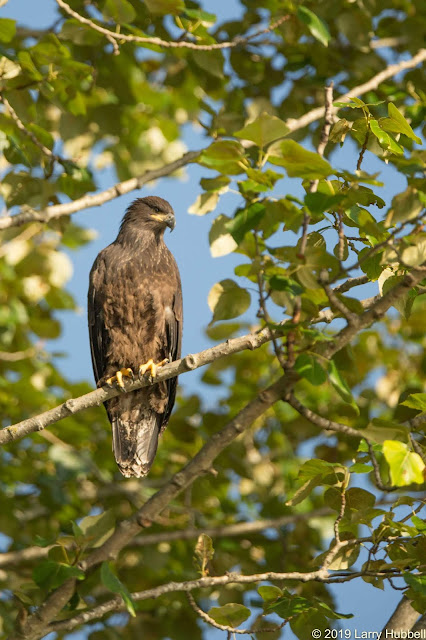 Last week's post left us, and Cutter the newly released young Bald Eagle, up in the air.

By the end of the post Cutter had surprised everyone with a successful upward flight. This reassuring development meant he was not dependent on his parents to locate him.

What we did not know was whether the parents would accept Cutter back and resume feeding him. He had been gone for well over a week. Since Cutter does not yet have the skills to provide for himself the parental delivery of food is critical to Cutter's survival in the wild.

Jeff Brown from the Progressive Animal Welfare Society (PAWS) did everything in his power, along with help from Rod Smith, UWild Waterfront Manager for the University of Washington, to give Cutter and his parents the optimal chance to resume their family relationship. However, there were no guarantees.

Last Monday, to everyone's great relief, Rod reported seeing Cutter, with the identifying silver-colored band on his leg, sitting near a parent and eating. All of the work and effort by PAWS, Jeff, Rod and concerned neighbors paid off. 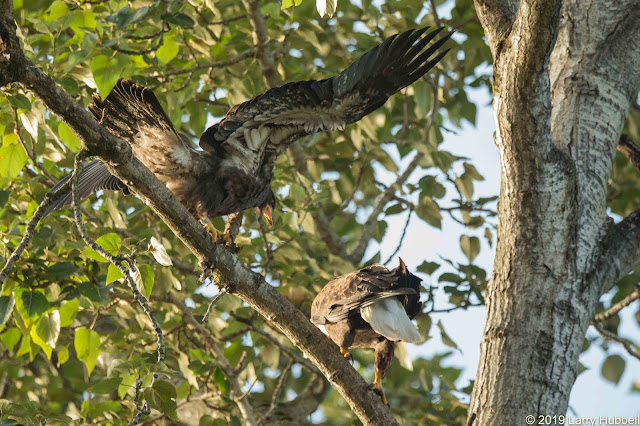 On Wednesday, I was lucky enough to see Cutter excitedly return to the nesting tree. As he landed his ankle bracelet, above the right foot, was visible. His begging implied he was hoping the adult in the tree was leaving food for him. However, after the parent left, Cutter moved to a nearby tree. This particular interaction did not include any fresh food for Cutter.

The band on his leg gives us a very special opportunity. If we watch carefully we may be able to document how long Cutter spends in his parent's territory, before leaving to make his way in the world. If we are lucky we may even be able to observe his progress as he learns to hunt. 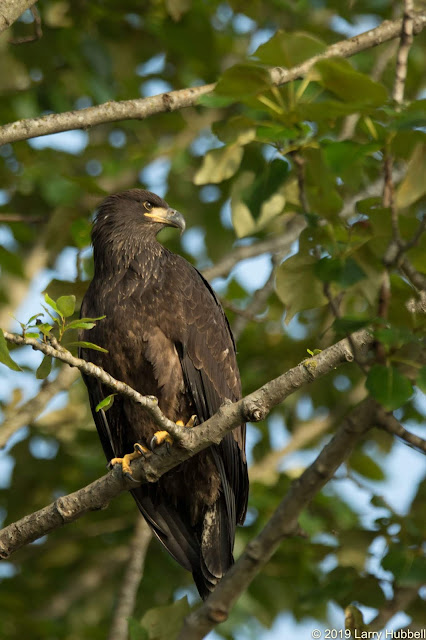 On Wednesday, even though I did not see him eat it was obvious he was well-fed. He was highly energetic. 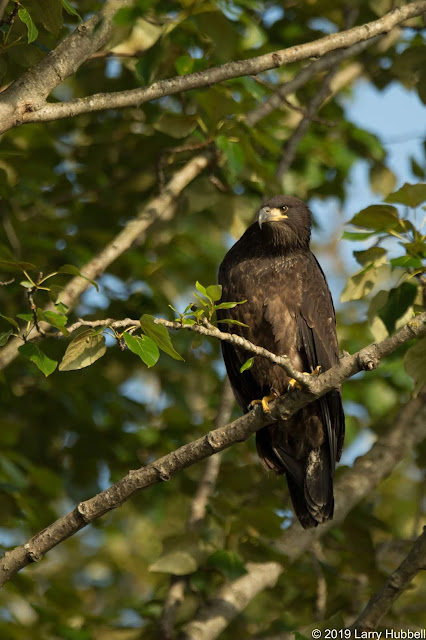 During the half an hour I watched, Cutter was almost constantly in motion. His curiosity was evident. 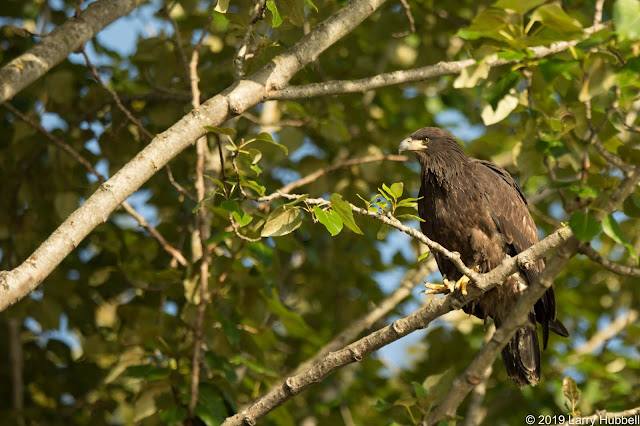 It is funny how the behavior of a young eagle seems almost inappropriate to the process of learning to hunt. The twisting and turning had to make him obvious to any potential prey. The loud begging calls, anytime he saw a parent or wished he saw a parent, also seemed counter-productive to the concept of hunting. However, the loud begging calls may be effective at motivating the parents. 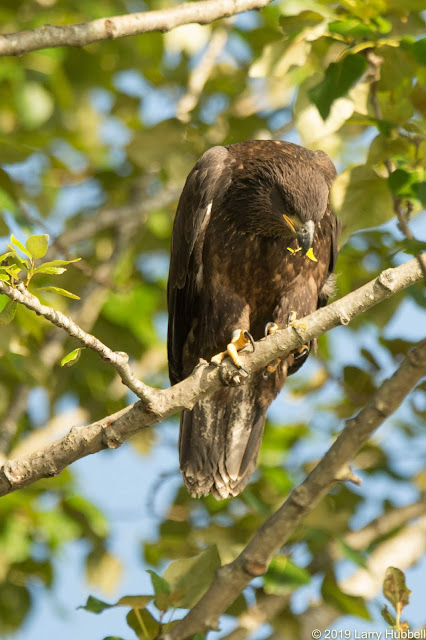 The quiet inspection of a leaf demonstrated his curiosity and might have helped with developing his fine motor skills. 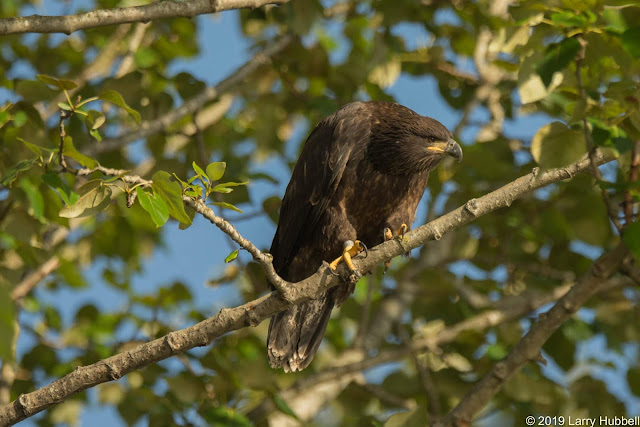 At certain angles, he certainly looked the part of a future apex predator. 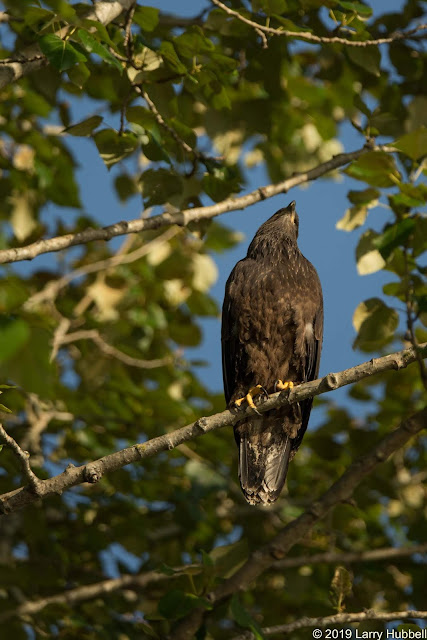 At other times, he reminded me of a bored grade-school child standing in the outfield... 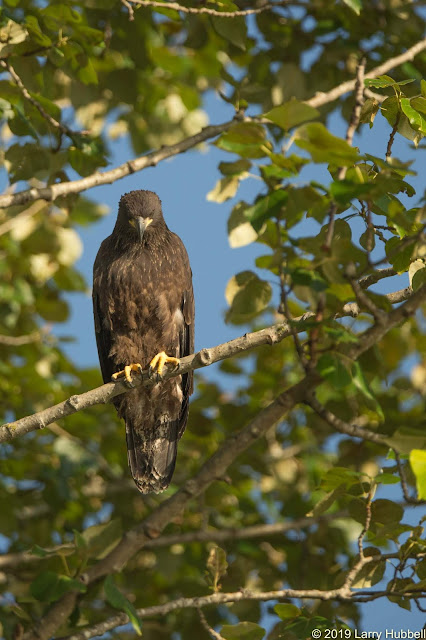 ...with no real interest in the game being played. 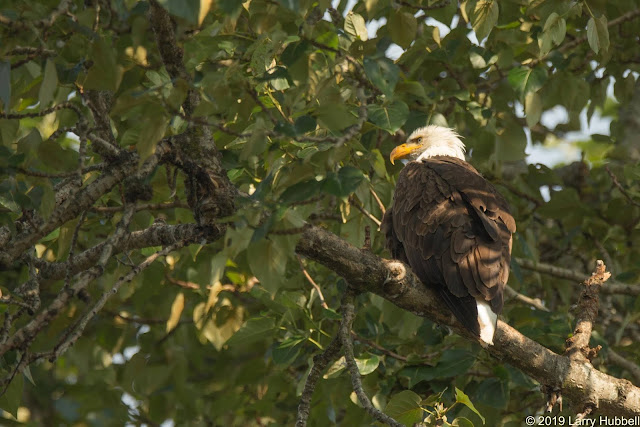 On Friday, I spotted one of the parents sitting quietly on the branch closest to the nest. I have often wondered why adult Bald Eagles have such brilliantly white heads and tails which contrast so sharply with their bodies. 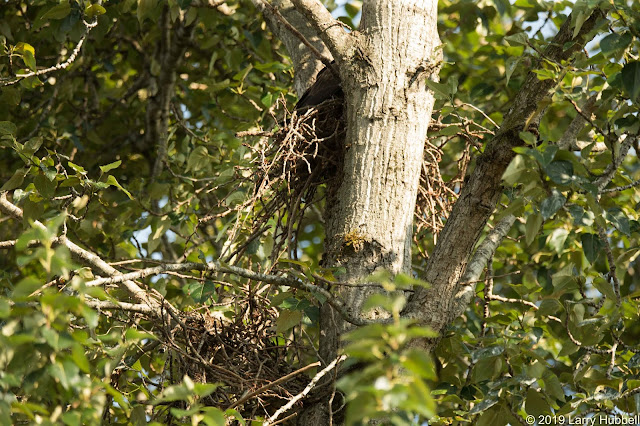 On the other hand, it seems obvious that the dark colors of the immature eagles provide camouflage which helps them avoid detection and danger. For example, when taking this photo I was slow to notice that Cutter's tail was hanging out of the nest. It was only the movement of his tail, which was constantly vibrating and shaking, as he dismantled his food which finally attracted my attention. 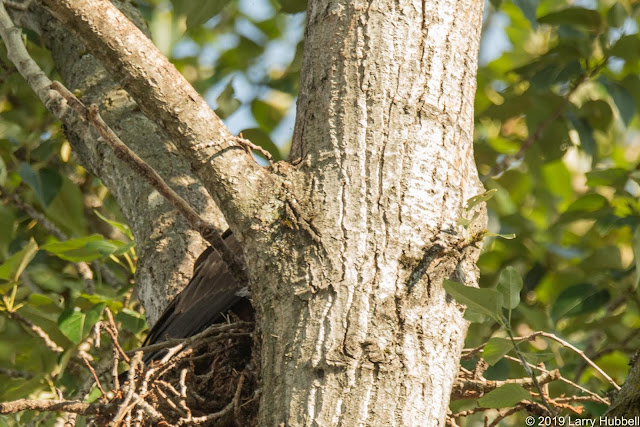 When I zoom in the back half of his body is a bit more obvious, to the left of the trunk. 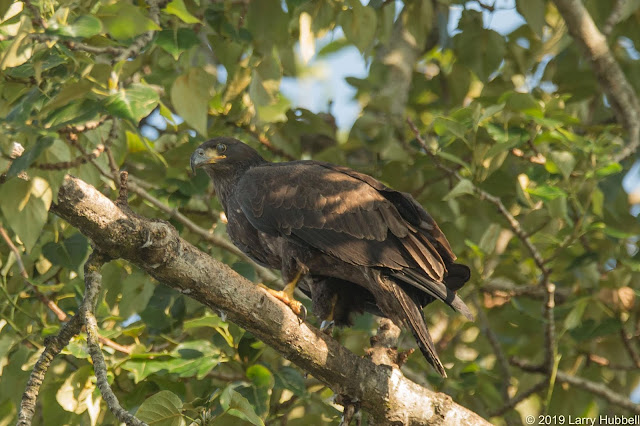 After he finished eating, he moved out on the branch where the adult had been earlier. 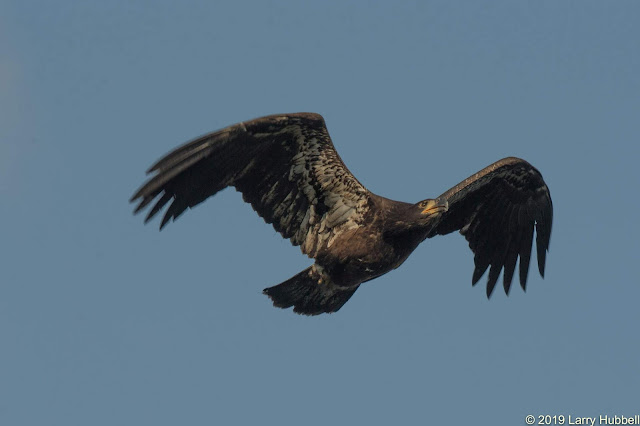 A few minutes later his sibling, Bay, made a beeline for the nest. I am not sure how she realized there might be food in the nest. Maybe she saw the adult leaving the area, and concluded there might have been a food delivery. 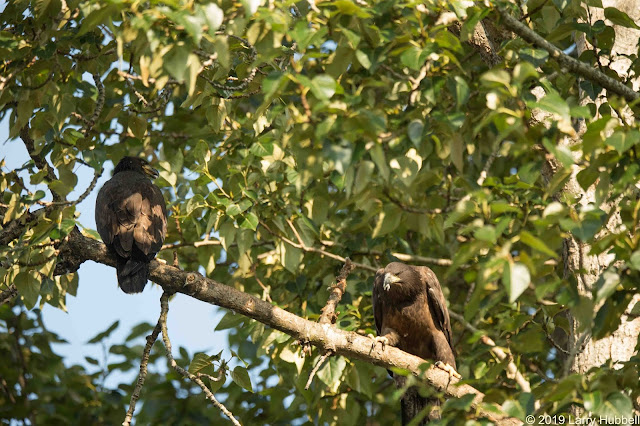 In any case, she was right. After a few minutes of cleaning up the leftovers, she popped out on to the branch with the remnants of her snack still hanging from her bill.

A couple of days later, I finally realized why mature Bald Eagles have such sharply contrasting heads and tails. One of the Adults was sitting on their primary roost by the Waterfront Activities Center while the other was sitting at their secondary roost e.g. the tallest cottonwood on Marsh Island.

As I searched the surrounding trees and failed to locate either of the youngsters, I realized the impact of the age-related differences in plumage. Regardless, of their motion and curiosity, the dark plumage of the youngsters can be hard to spot. On the other hand, the contrasting light and dark plumage of the adults sitting in the treetops is nearly as obvious as a flag blowing in the breeze. 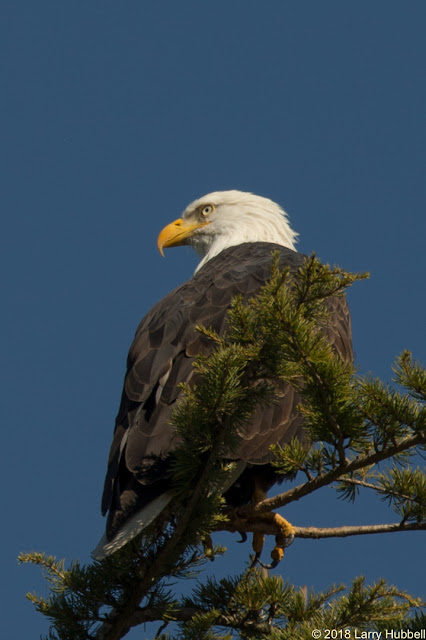 In my mind, an adult's plumage, posture and location are like a flashing sign above reversible lanes which says, 'Do not enter!' It provides an obvious warning to other eagles that the territory is taken and trespassing is not worth the risk. This felt like a new idea to me, but I suspect ornithologists must have reached this conclusion long ago.

As I turned to leave I saw a Bald Eagle approaching from the south. It looked to be about four years old. As it reached the 520 freeway, where it could see both Monty and Marsha, its forward progress stopped. It circled and drifted off to the side without getting any closer to the adults. It reinforced for me that the flashy white heads and tails help to resolve territorial claims without violence. Even if this approach is only partially successful it would be a positive, self-reinforcing trait. 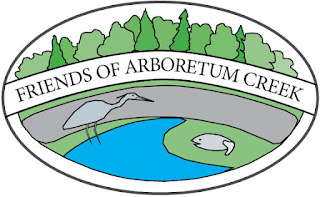 The Friends of Arboretum Creek have just applied for a King County water quality grant named:

This project will create a design for:
In particular, returning in excess of 40,000 gallons per day of year-round flow to Arboretum Creek will change the upper portion of the stream from stagnant pools of hot summer water to a functional ecosystem. The restored aquatic life should then attract a variety of birds and other creatures. Some of the fish-eating birds I expect to utilize a restored Arboretum Creek are: 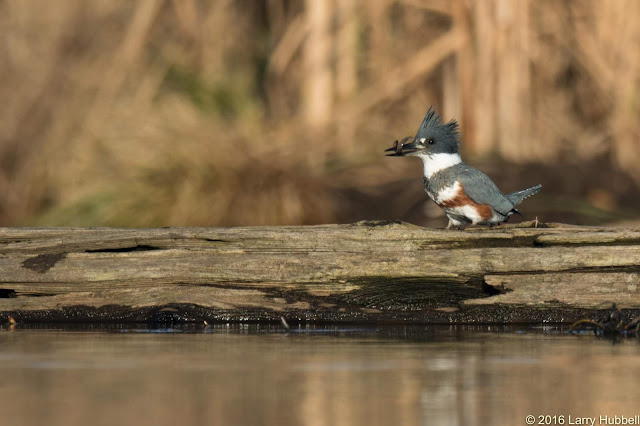 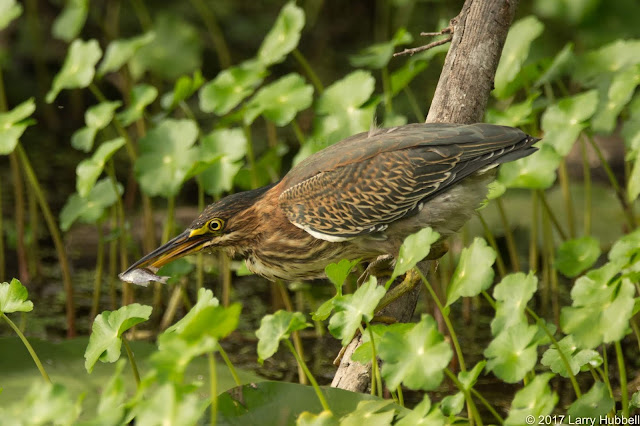 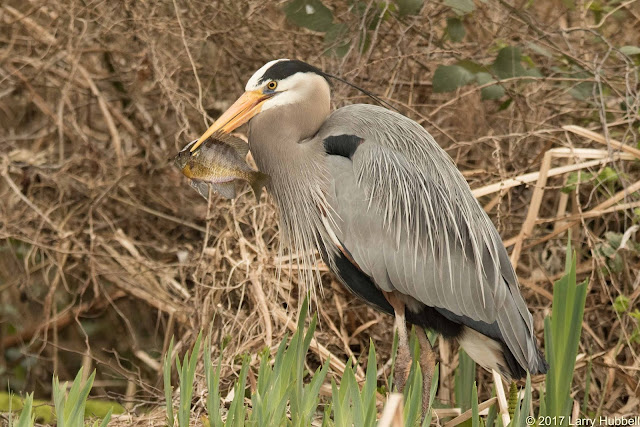 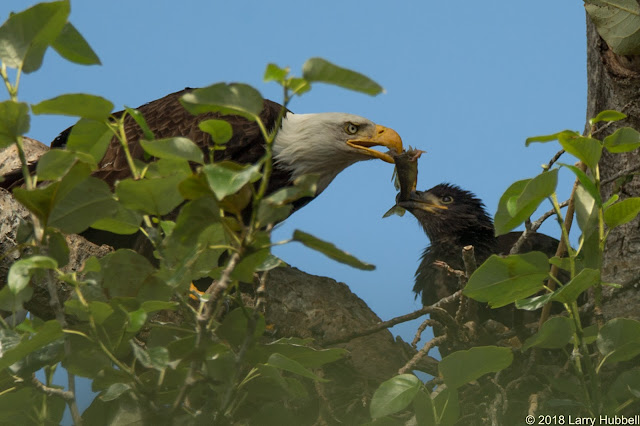 ...if the fish grow large enough, maybe even Bald Eagles and Osprey could find food in Arboretum Creek.

Returning this additional flow to Arboretum Creek will provide cascading benefits for King County ratepayers. Including:
During the next few weeks, as the King County Council reviews water quality investment options, your letter of support for this project could make all the difference. Please email the Council Members and emphasize the wisdom of this investment based on which of the cascading benefits are important to you. The Council Member's email addresses are:

Restoring nature is a fundamental step to a thriving human society. Thank you in advance for doing what you can.

Friends of Arboretum Creek work in partnership with:

My intention in my weekly post is to include at least one photo each week and visually challenge us to know the difference between native and non-native lifeforms. Which of the following white flowers are native to Union Bay? 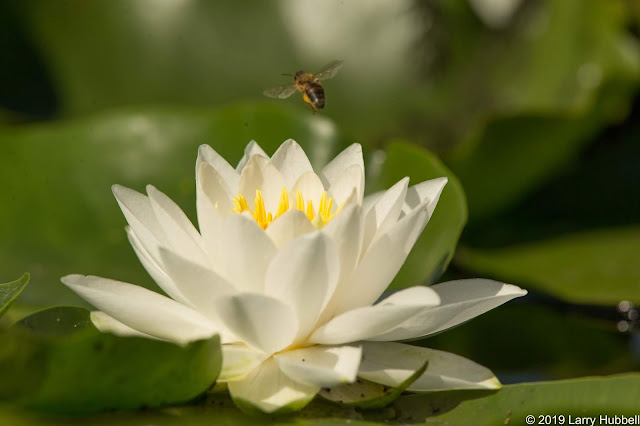 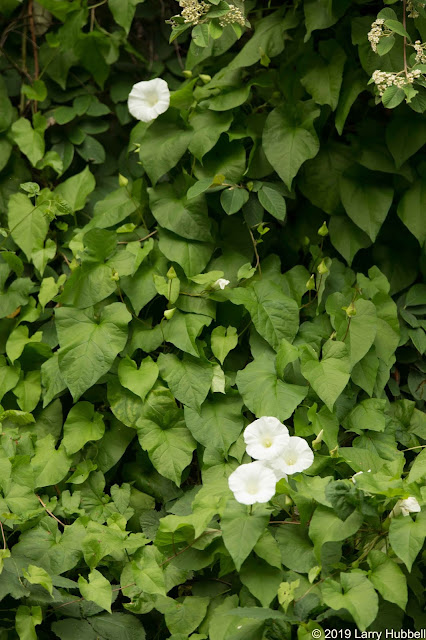 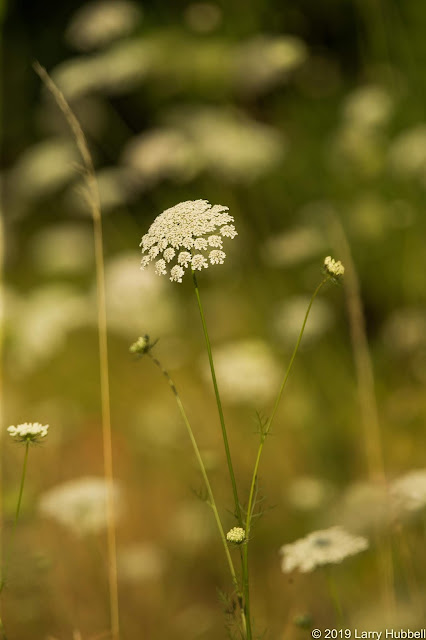 None of the above are native to Union Bay!