The Hidden Lives of Herons 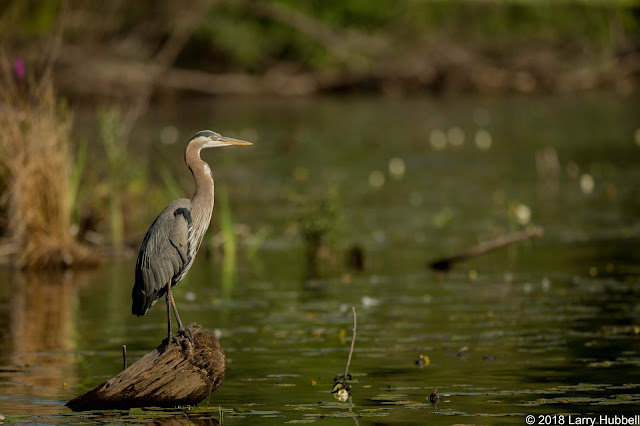 Great Blue Herons are not particularly shy. They often hunt while simply standing quietly in full view. Even when strolling slowly through the water they generally make no pretense of hiding. However, when it comes to nesting and reproduction they manage to maintain a surprising level of secrecy. 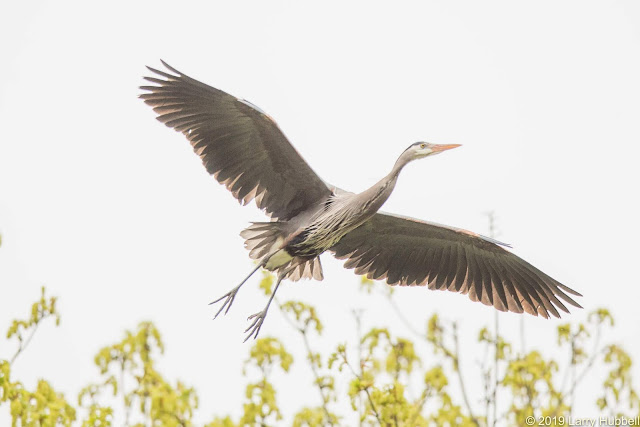 This is especially amazing for birds with wingspans which can exceed six feet and urban nesting colonies which can include dozens, or sometimes even hundreds, of nests. 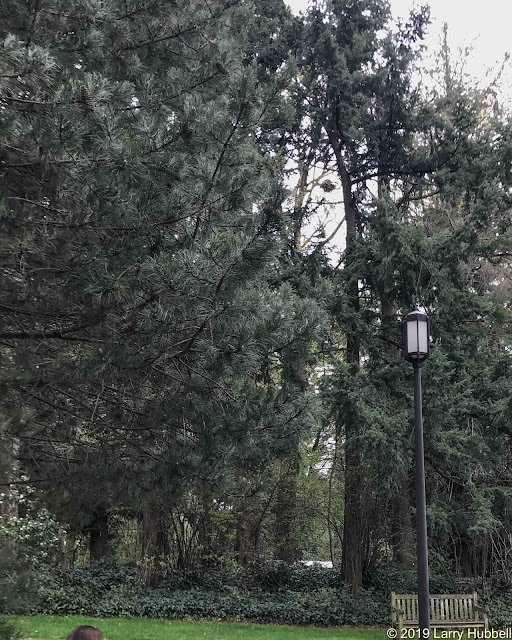 Our local Union Bay colony has only a couple dozen nests. Hopefully, when the 520 runoff is ultimately excluded from Union Bay, our local supply of fish will flourish and the Great Blue Herons will stage an epic comeback - not to mention the Osprey.

Most of the Heron's current nests are hidden away near the tops of Big Leaf Maple trees on the UW campus. In the photo above you can barely see a heron standing in her nest. She is the upper half of the small roundish dot, visible between the trees, and up to the left from the lamp. 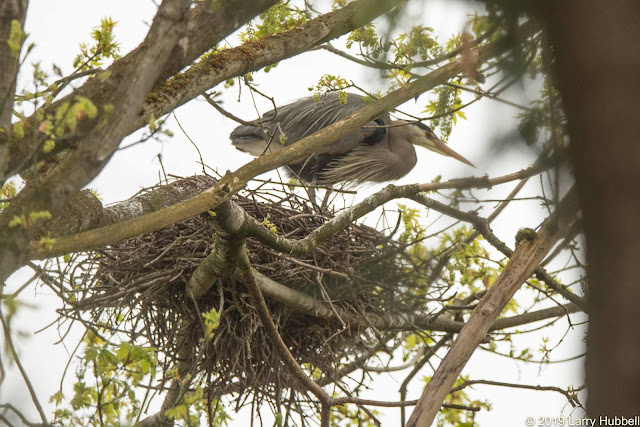 Here is a close up of the same bird in the nest. According to what I have read the female Great Blue Herons generally, do the incubation. This assumption is my only basis for determining the gender of the bird. I am not aware of any plumage differences between males and females.

Note: I do not believe there are any twigs in the nest which are larger than the diameter of the heron's leg. 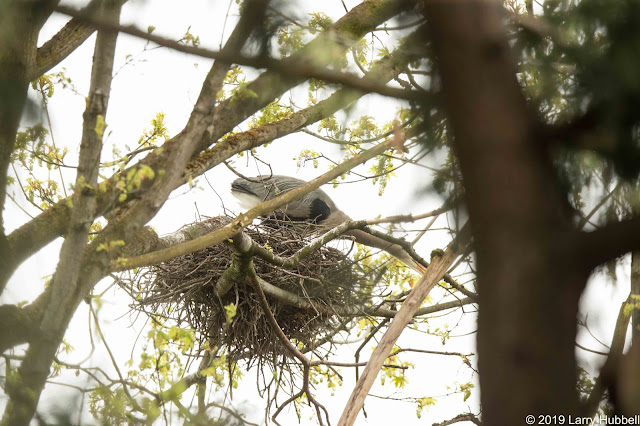 Here she is leaning out to secure another twig for the nest. The long neck is clearly useful for more than just snatching frogs and fish out of the water. 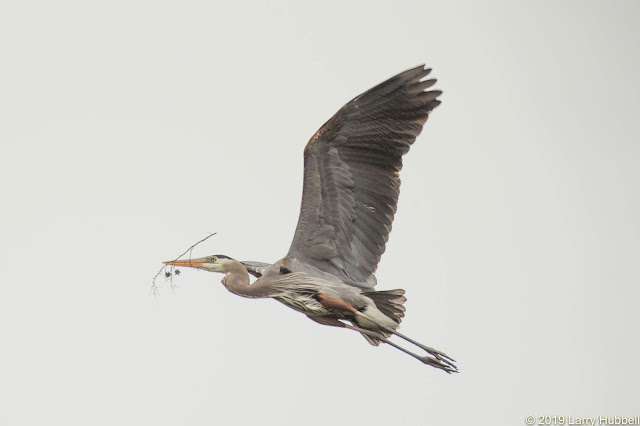 Nests are often reused from one year to the next. It appears that the males supply the bulk of the supplemental nesting materials. 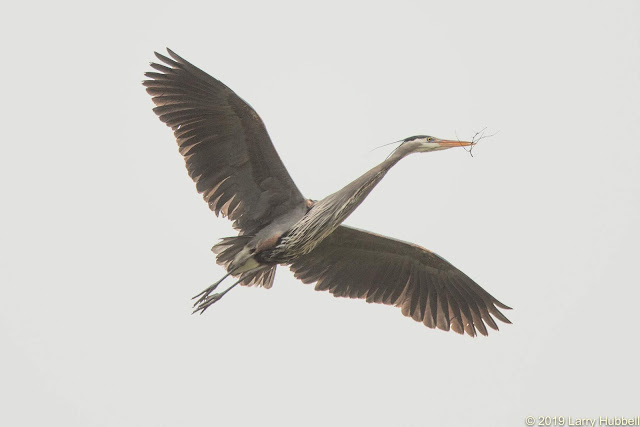 The contrast between the materials used by Great Blue Herons versus... 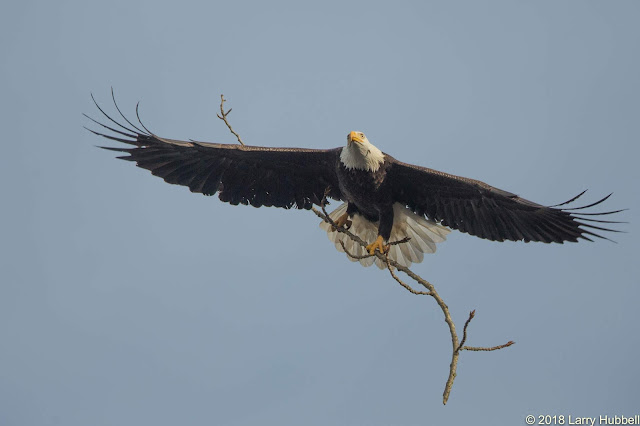 ...Bald Eagles is dramatic. A Bald Eagle will occasionally break a cottonwood branch by striking it with their chest while flying at full speed. They will also try hanging upside down by their feet and swinging from a branch until it breaks. 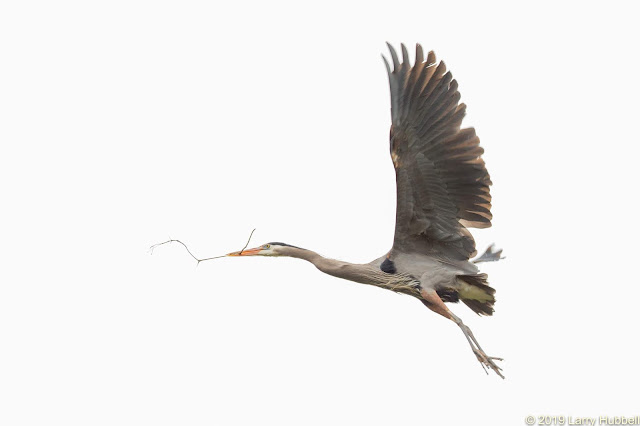 Heron nesting material appears to be consistently smaller and lighter. 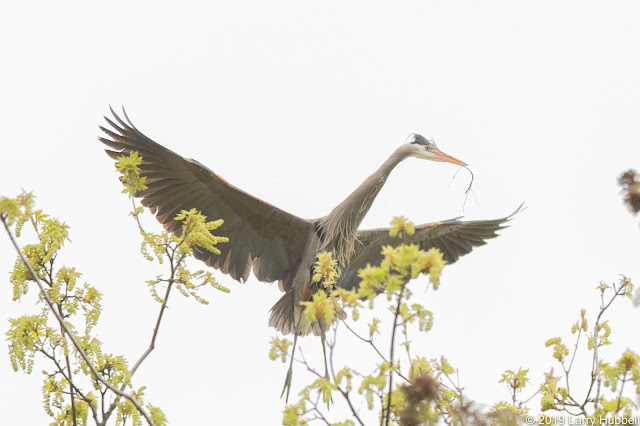 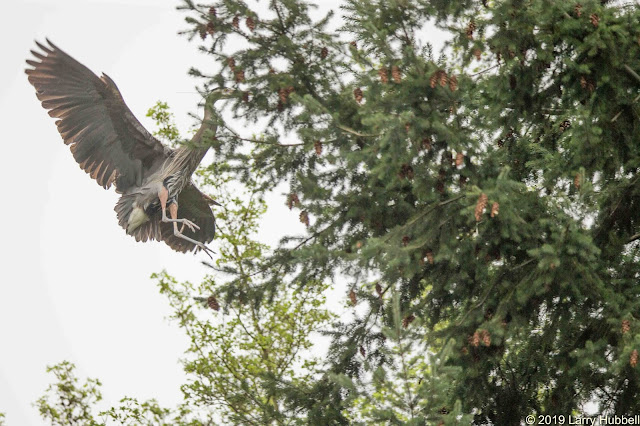 On Tuesday, I watched numerous retrievals of twigs by Great Blue Herons. 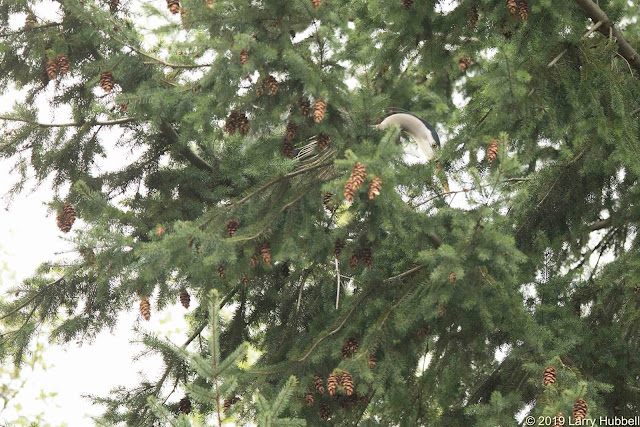 They would consistently land on the outer tips of an upper branch in a nearby Douglas Fir tree. Then with great care and precision, they would slowly walk down the branch. 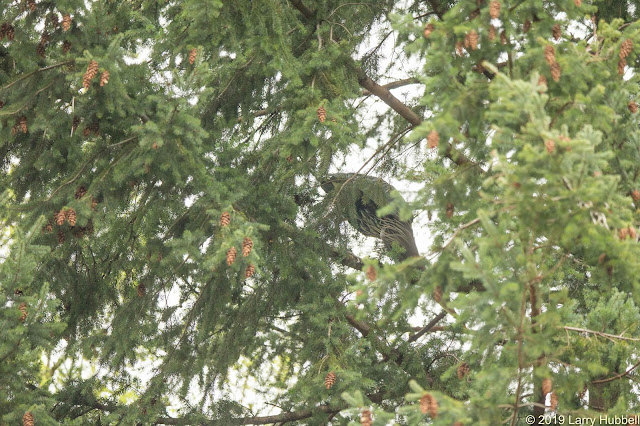 Once the males were inside the bulk of the green foliage they would carefully extend their necks and slowly break off small dry twigs from inside the central, highly-shaded portion of the tree. I never saw a Great Blue Heron use its feet to remove or carry even the smallest twig. 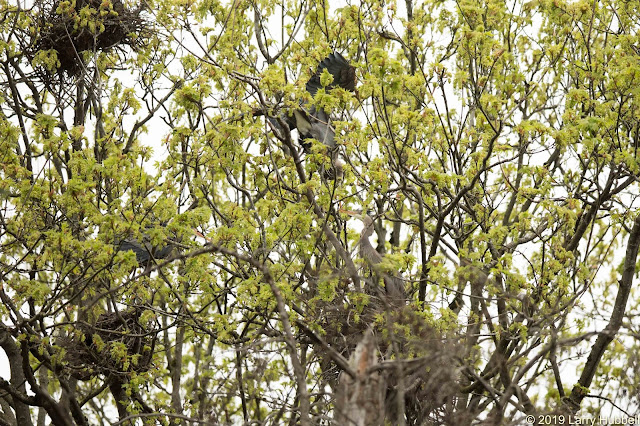 Another surprise was watching a heron slowly and delicately extend his neck down from an overhead branch towards his mate. She stood and extended her neck up and out of the nest in order to meet the male halfway. At which point they carefully made the 'handoff' of the dry little twig.

By comparison, I have watched eagles land in the nest with a large branch and smack their mate in the head with a wing while attempting to retain their balance. Often eagles will lose control of the branch and simply watch it drop to the ground. The pile of new branches below the Montlake Cut eagle's nest is large enough to make a good start a second nest. The difference, in the nesting behaviors of the respective species, is striking. 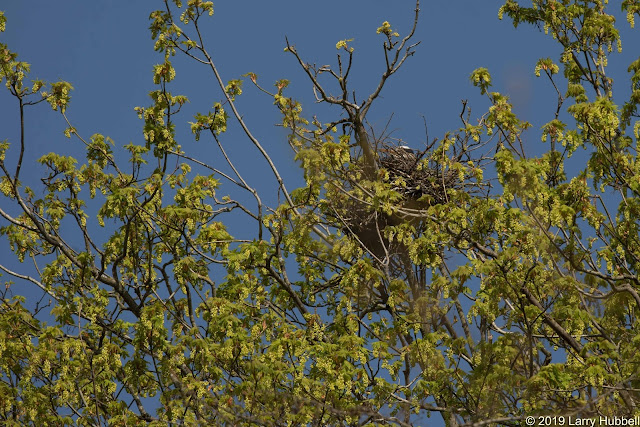 Yesterday afternoon, during the brilliant sunshine, I returned to the heron colony hoping to secure a brighter set of photos. I watched for a couple of hours, while the clouds slowly moved north. All I could see where tops of the female's heads as they sat in their nests. 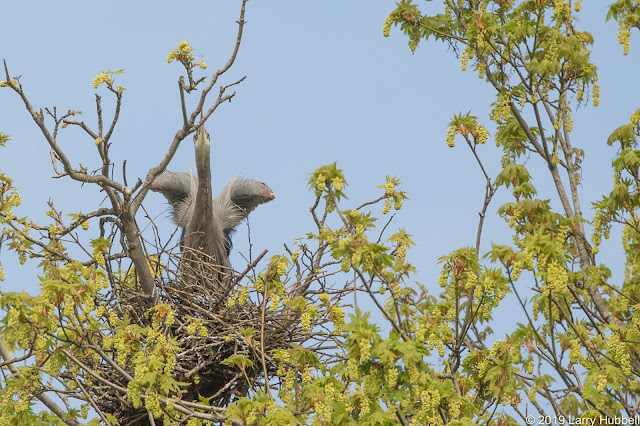 Finally, as the sunlight diminished the female in this nest sat up and stretched. 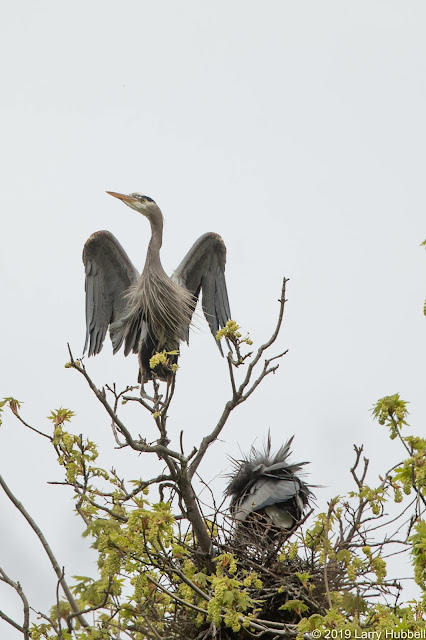 Later still, her mate returned and perched just above the nest. At the time, I thought their extended feathers might have been evidence of wind in the treetops, even though I did not notice any wind at ground level. 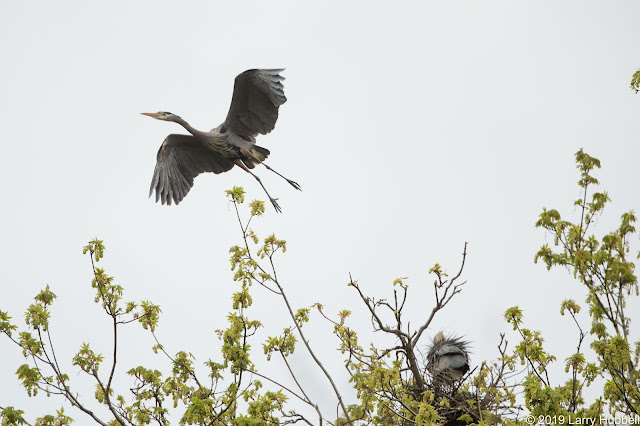 Soon the male left his perch and headed towards a nearby Douglas Fir tree. I thought he was going to pluck off another one of those small dry twigs. My assumption was wrong. 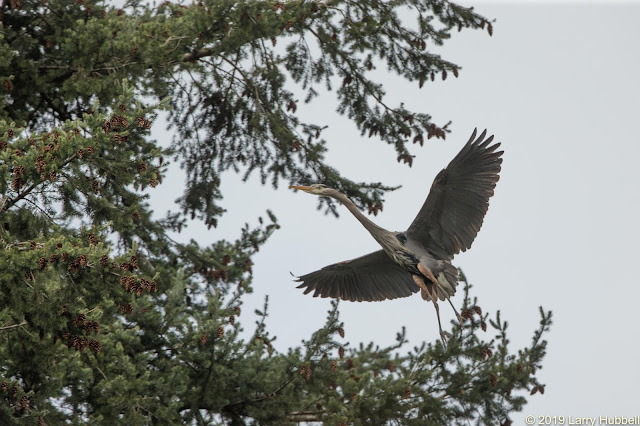 Maybe I should get half-credit, at least he landed in the fir tree. 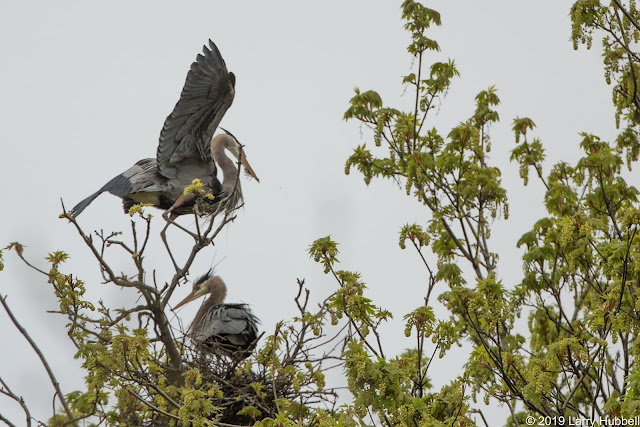 However, when he returned to the nest he was carrying a short tip of green needles in the well-known, 'bottle-brush' arrangement. 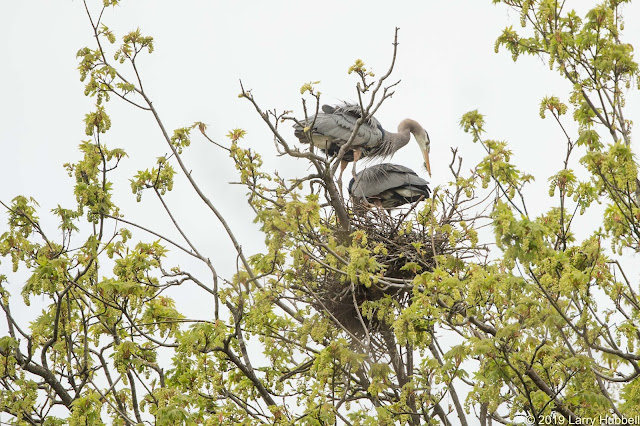 Leaning forward the male carefully added the greenery to the nest. 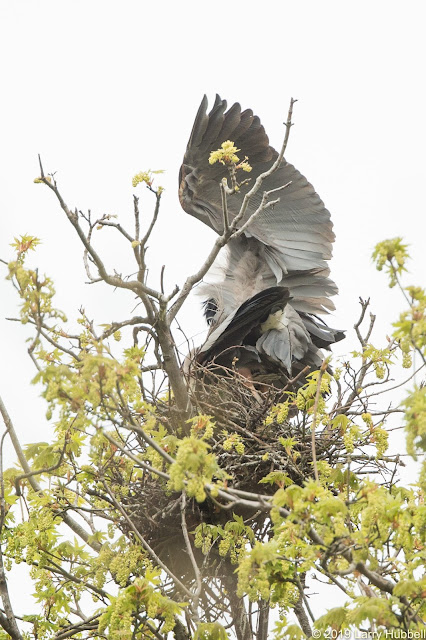 Immediately, the herons began mating. The flurry of grey-blue feathers made the process discreet, although the concept of modesty seems to be a wholly human invention. 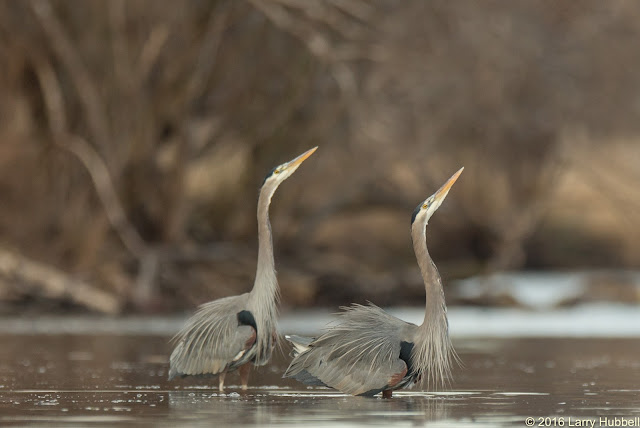 It was only later while reviewing the photos that I remembered having seen two herons with all their plumes extended on their backs and chests. This photo, from 2016, shows a pair doing their mating dance on Union Bay. I suspect that instead of the wind-blowing what I saw yesterday was the herons raising their plumes and signaling their readiness to mate.

The next activity was the male securing the fresh tip of a Douglas Fir bough, which was immediately followed by mating. Could the gift of needles be part of the process? Would a dry twig have worked as well? I do not know.

Afterward, the male made four more round trips to the Douglas Fir tree. He secured another mouthful of green needles each time. The female apparently decided that once a day was plenty. She sat calmly in the middle of the nest, with her plumes laying low and did not provide him with any further opportunities.

In these photos, you can see that the catkins on the Big Leaf Maples are already out and the leaves are beginning to sprout and extend. In the near future, the reproductive lives of herons will once again be hidden from view. At which point, additional observations will have to wait until next year. 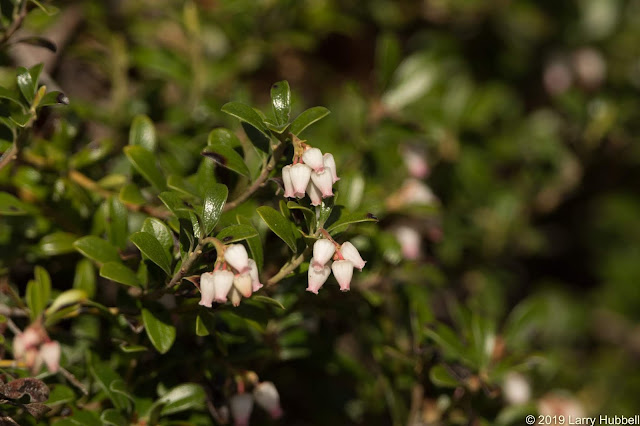 This wonderful native plant with leaves only a half an inch long and tiny white 'urn-like' flowers is currently blooming. What is it called?

Note: In case it helps, this photo was taken just west of the UW Great Blue Heron colony.

For an additional definition of the word, Click Here.

By the way, I ran into a student, Nicholas I believe, who told me that an environmentally-oriented group at UW intends to remove the ivy below the heron's nests. After the nesting is finished, of course. Their intention is to enable the native seeds, still in the ground, to return to productivity. They believe this small patch of earth may be the only undisturbed topsoil on the campus. Hopefully, it will function as a seed bank replenishing the assorted diversity of flora that originally existed at this location. What a thoughtful and delightful idea!