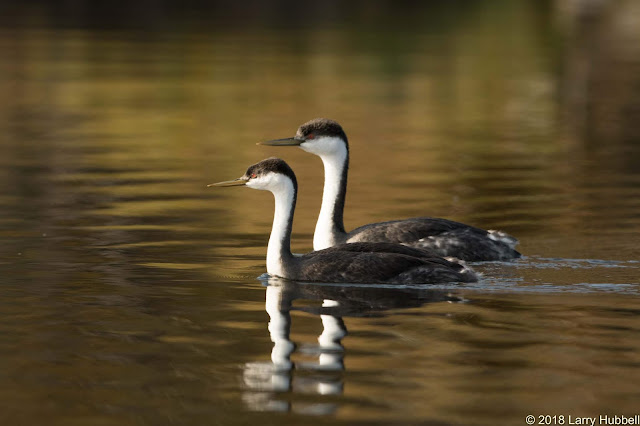 I have seen Western Grebes at a number of different places on Union Bay. However, my most common sightings are in October and immediately east of the Conibear shell-house. This year, these two showed up on time and at the expected location. 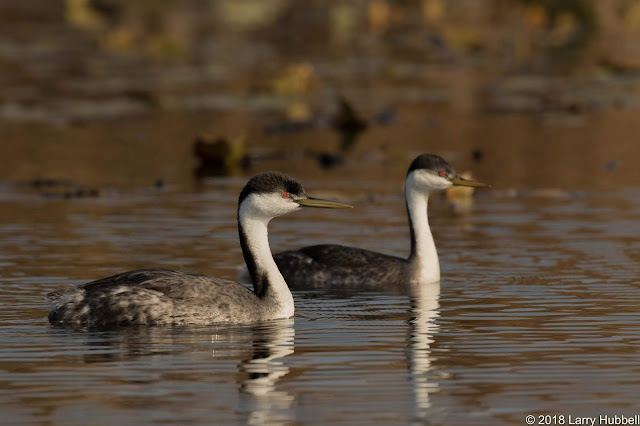 While watching them lazily paddled back and forth, I noticed a fairly obvious difference in size. 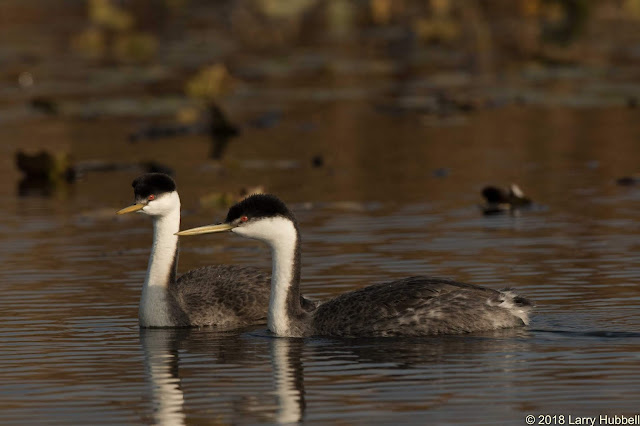 Initially, I assumed the difference was due to gender. As time passed, I began to wonder, Could the smaller bird be a juvenile? I had no clue how to resolve the issue. I did not remember noticing any age, or gender, related variations between Western Grebes in the past. 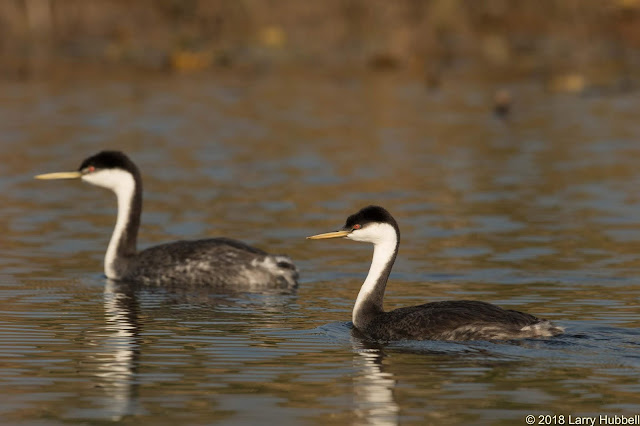 The bird on the left was not only larger and longer but it even seemed to float higher in the water, with a larger percentage of its back and body above the surface. I wondered why. 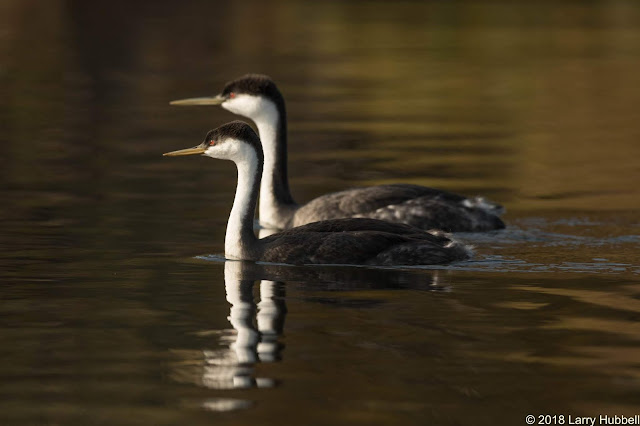 I think this photo makes the size difference most obvious. Theoretically, if the two birds were nearly the same size, the closer bird should appear larger.

Later, while reading Peter Pyle's book, 'Identification Guide to North American Birds - Part II', I came to understand that male Western Grebes are often noticeably larger than the females. Among other things, their bills are generally longer. However, in some cases, there can be overlap. A small male could be somewhat smaller than a large female. However, it seems reasonable to assume a visually observable size difference most likely implies the larger bird is male. 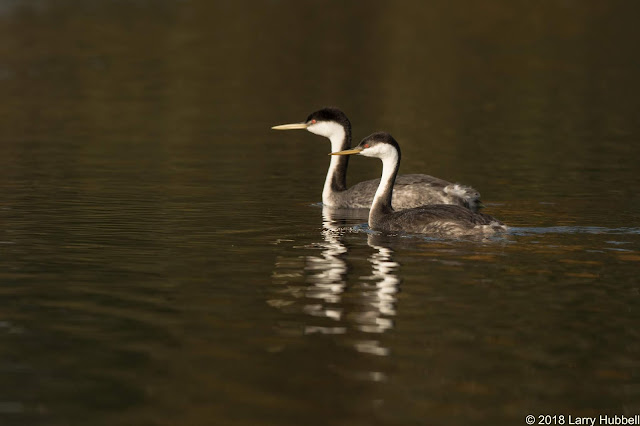 In this case, I found the size difference to be quite obvious. However, this did not resolve the question of age. Could the smaller bird have simply been a juvenile, of either gender? 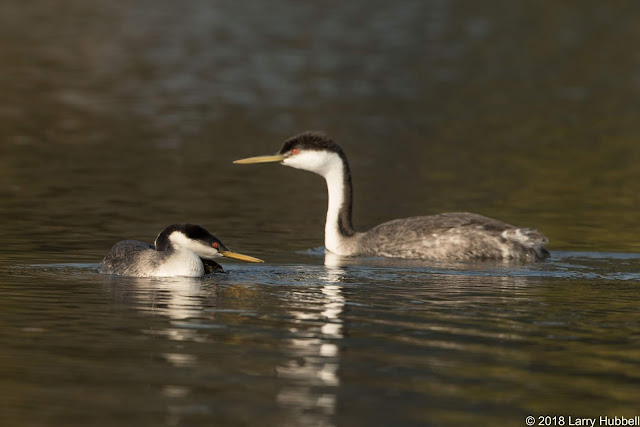 As the afternoon progressed, the smaller bird turned in the water. For a split second, I wondered if it was going to attack the larger bird. It did not. The larger bird simply ignored the antic and they resumed their casual paddling. 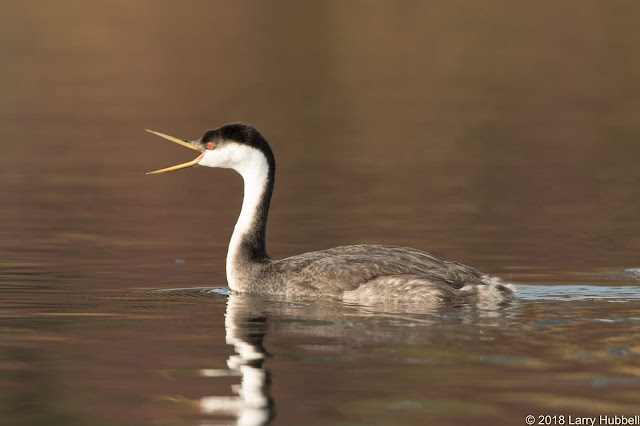 Later, the smaller bird appeared to yawn. They must have fed earlier in the day because they did spend much time diving for food. 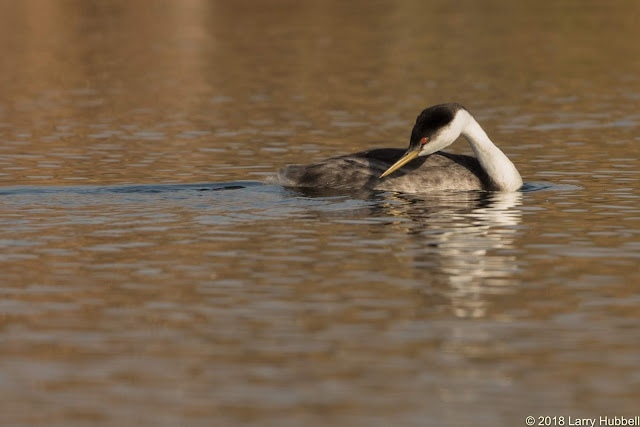 As with other birds, I assumed that preening was a secondary activity which might indicate their hunger was satiated. It is interesting, that unlike Pied-billed Grebes, I seldom see a Western Grebe bring their catch to the surface. I suspect, they generally swallow their food underwater. 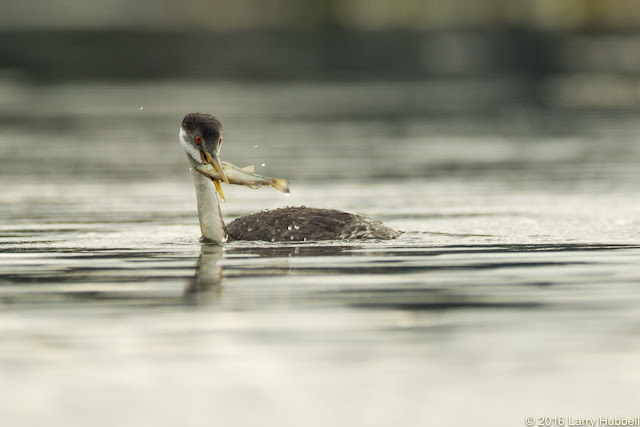 Only once have I photographed a Western Grebe with a fish out of water. All About Birds says, 'They either spear prey, or capture it with a forceps-like motion of the bill, taking larger prey items to the surface before swallowing.' 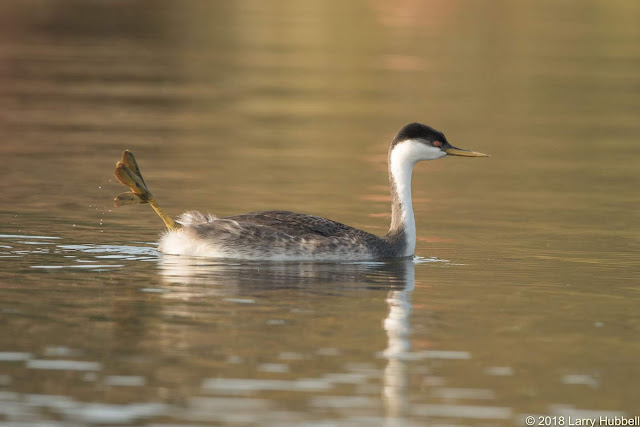 The preening turned into stretching. I find grebes to be really quite odd. They have super wide toes, instead of webbed feet, and their legs are attached were their tails ought to be. This is an amazing adaptation for underwater swimming, but it makes walking on land fascinatingly awkward. Please, Click Here to see a rare video, as recorded by Mick Thompson.

By the way, if you want to stump your birder friends ask them, 'What color is a Grebe's tail?' 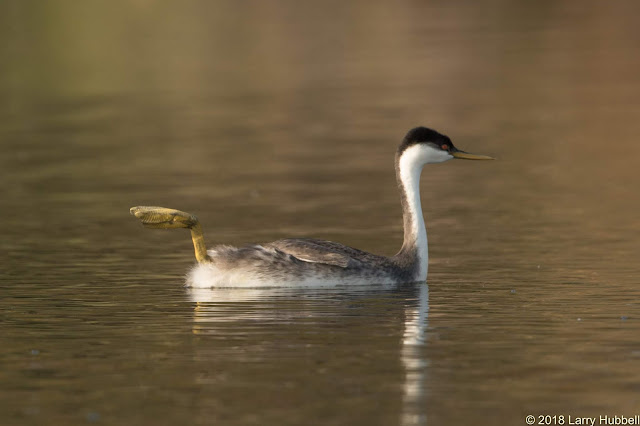 This bird continued to swim around with only one foot in the water. Due to the angle of presentation, I was initially uncertain whether I was seeing the top or the bottom of the exposed foot. Certainly, a Western Grebe's hip joint does function like mine. 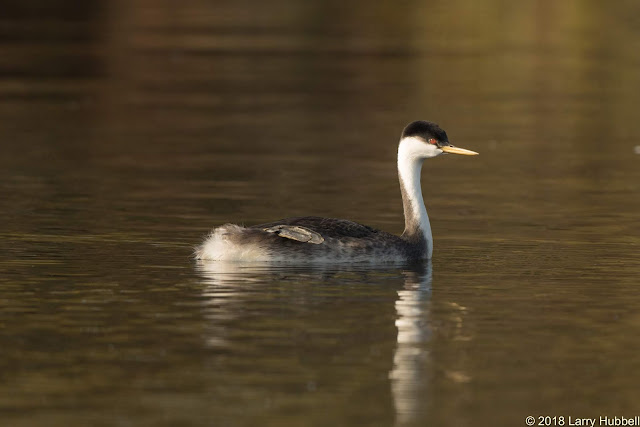 Ultimately, the bird simply laid its foot down on its back. At which point, it seemed obvious that I was now seeing the underside of the foot, which was a dark greyish-black in color. This casual inverse of the leg made me think Western Grebes should be given the title, 'Yoga Masters'. 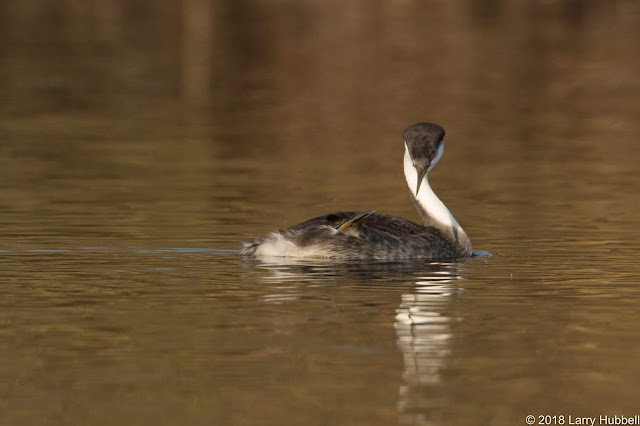 With its long neck and beak, it was obvious that the grebe could easily reach over its back and thoroughly inspect its foot with its bill. 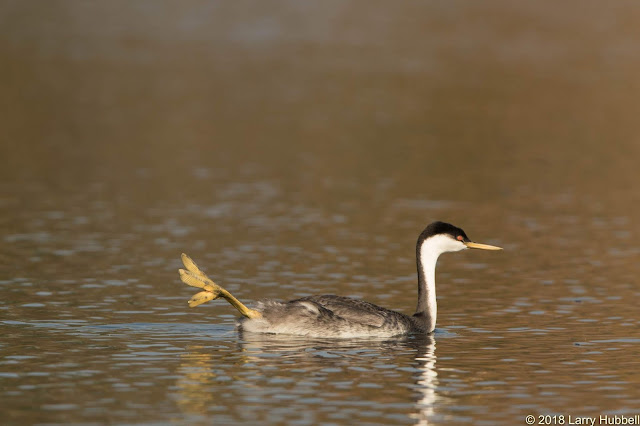 Little did I know that the yellow top to the smaller bird's foot might imply an answer to my question. 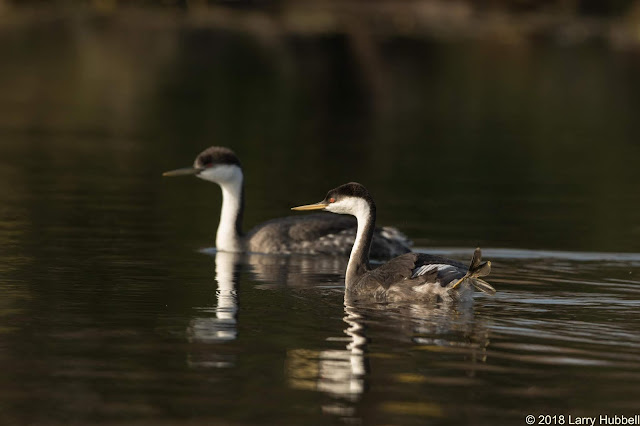 I understood this to imply that the smaller bird was most likely an adult since the upper surface of its foot was yellow instead of olive green, as it would be in a juvenile. 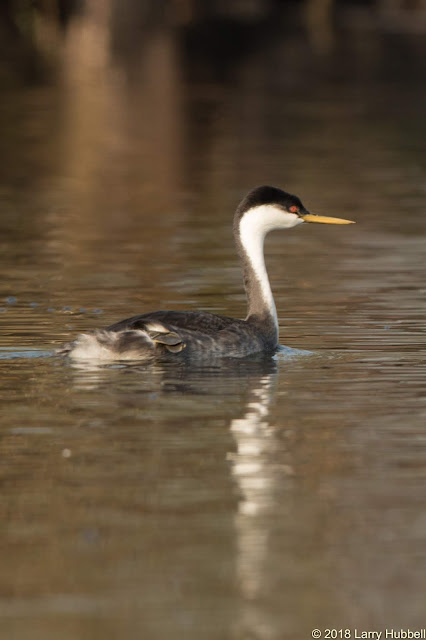 This whole photographic process was an incredible surprise for me. At the time, I was out in a rowboat with my friend, Chris Kessler. Chris quietly, rowed the boat around to the sunny side of the birds while I photographed their practice of yoga. It was a wonderful first experience. I have never before had a maritime chauffeur. Thank you, Chris! 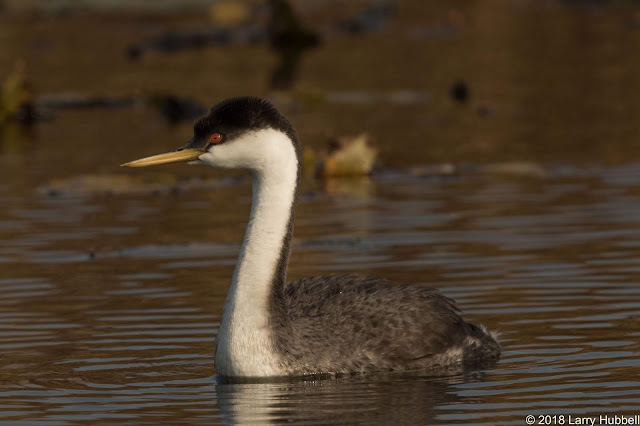 I will leave you with a final Western Grebe conundrum. It seems to me that the upper mandible, on the smaller, female bird, often appeared to be a tiny bit longer than the lower half. I think it creates an almost 'up-turned' look to the bill. With the larger male the two parts of the bill appear heavier and precisely the same length. The next time you are observing Western Grebes take a look and let me know whether or not you too can see this potentially, gender-based bill difference. 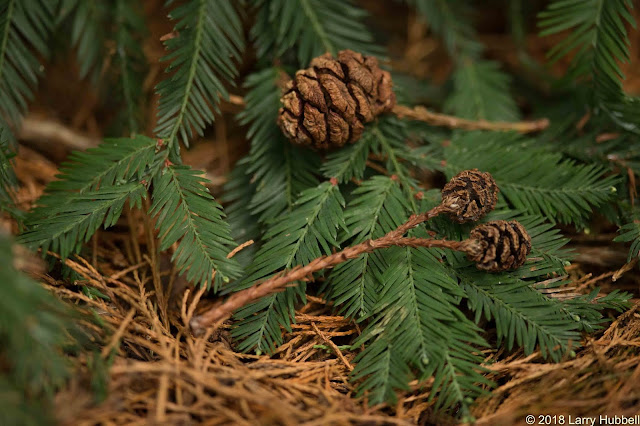 What types of trees are these cones from? Are they native to Union Bay?

Neither species is native to Union Bay.

Posted by Larry Hubbell at 1:17 PM