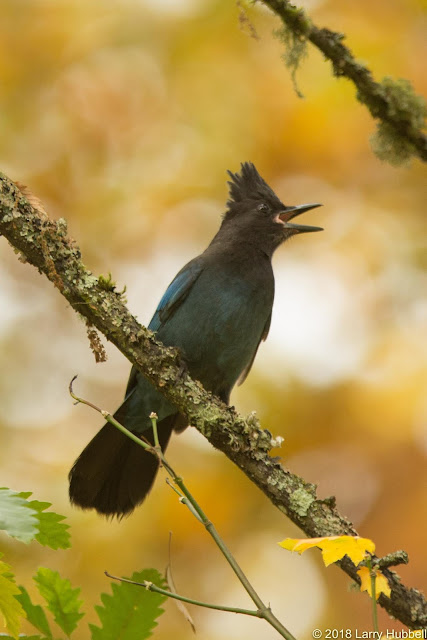 Autumn is a wonderful time of year. I love the brisk breezes, the occasional brilliant sunshine and the golden-yellow leaves drifting slowly to the ground. It is also, the time when acorns fall. Of course, the acorns often get a little help. The Eastern Gray Squirrels and the Steller's Jays are aggressively searching, plucking and stashing this year's bounty. Their current effort is an investment which will be critical to their survival during the short, dark days of winter, when the leaves are gone and the oak trees look lifeless and bare.

For me, this means it is time to resume my quest for a photo of a sunlit, brilliant blue Steller's Jay highlighted against a background of orange and yellow leaves. The preceding photo is my best attempt of 2018. Hopefully, I will catch an even brighter shot before the leaves are gone. 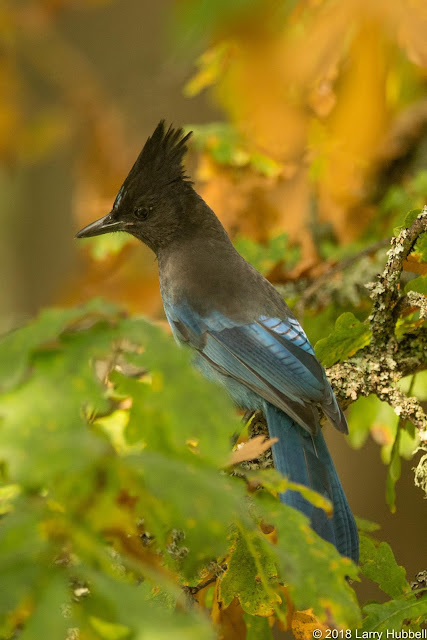 I suspect their raucous, rapid-fire call is the most prominent memory many people have of a Steller's Jay. However, what strikes me the most is their quiet, inquisitive intelligence. 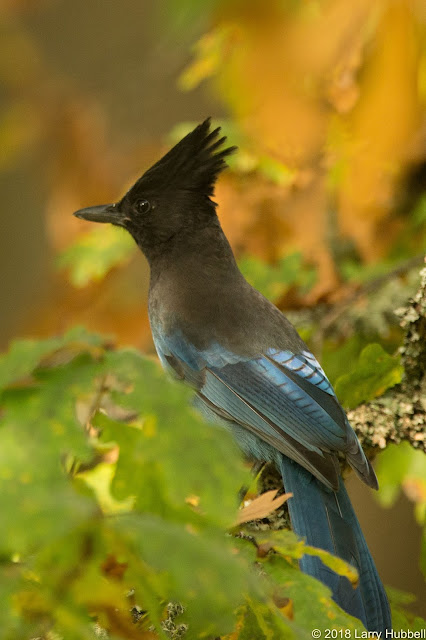 I find it impossible to watch a Steller's Jay without being impressed by the way they evaluate their opportunities. 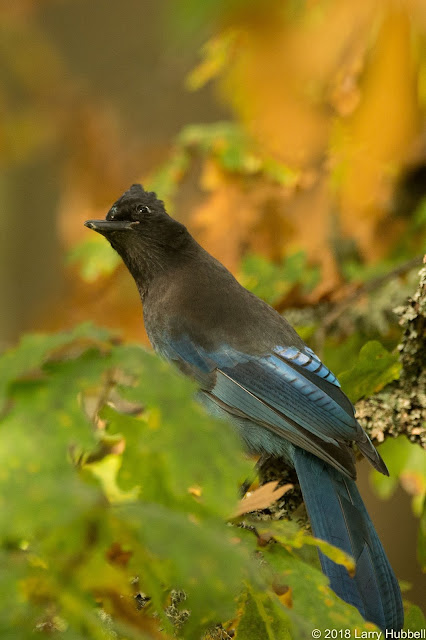 As they search for acorns they appear to be debating things like the maturity of the nut, the best angle of approach and possibly the size of the prize. 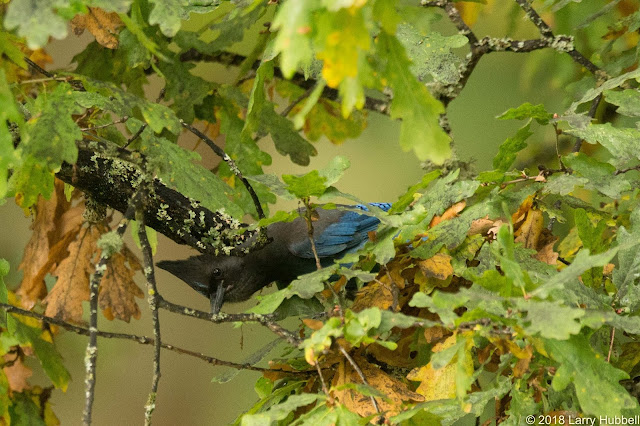 Sometimes I wonder if we studied the world as carefully as a Steller's Jay, would we make better choices? They not only study their world - they remember. If they hide just one or two acorns, for each day of the coming winter, then they will need to remember over one hundred different storage locations. What a memory! 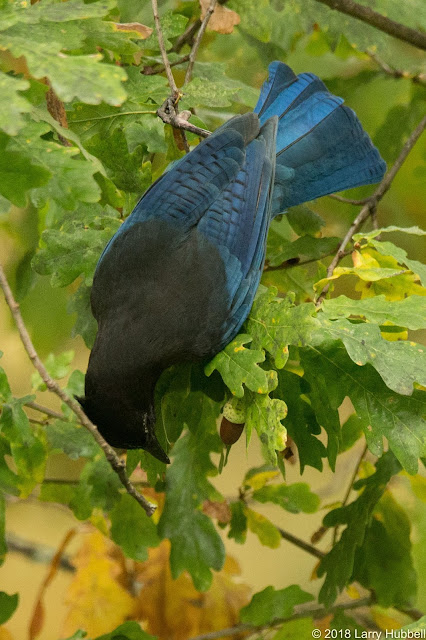 The search for winter provisions hits high gear in early October. The jays start out in the treetops and as the month proceeds they slowly descend. 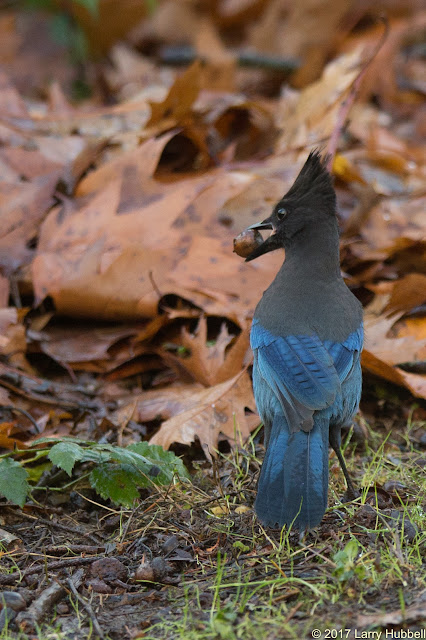 Toward the end of the month, as the elevated acorns disappear, the jays spend more and more time on the ground - flicking leaves to the side and searching for hidden nuggets of nourishment.

Birds of North American Online* says that the sexes are similar with one exception. The dark barring on their wings and tails is fainter and thinner on females. Notice the faint barring on the tail of this bird versus the darker barring on the bird's tail in the next photo below. 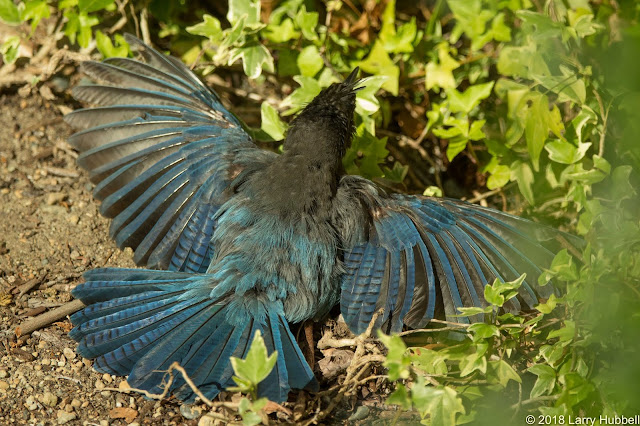 A special, Thank You!, to Susan and Ralph for enabling access to take this photo.

Steller's Jays are normally very careful birds and will often flush if you just look at them. Earlier in the year, I felt very lucky to catch this photo of one sunning-itself on the ground. 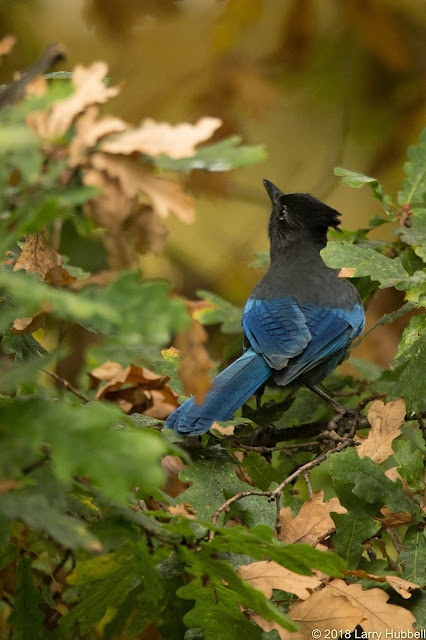 By the middle of the October, the upper acorns have been seriously depleted and the jays tend to spend more time in the lower branches, getting ever closer to eye level. 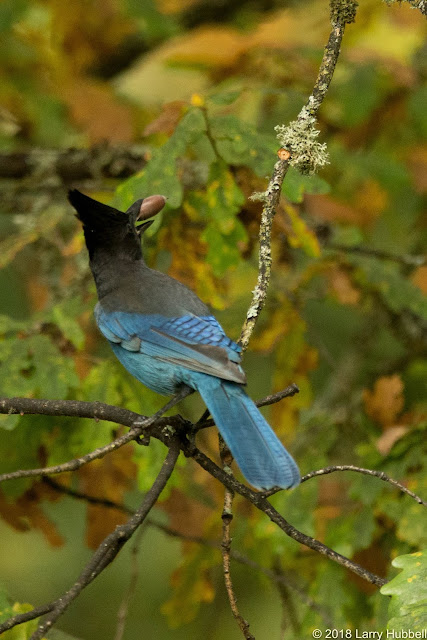 One by one, the acorns are plucked and carried away. 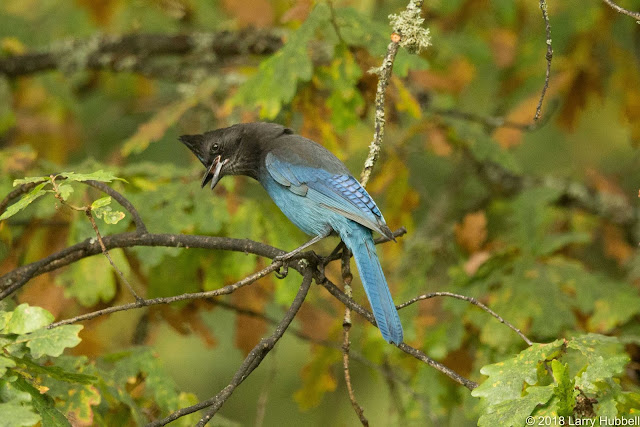 If you could zoom in enough you would see that this bird has a whole unshelled acorn in the back of its mouth. 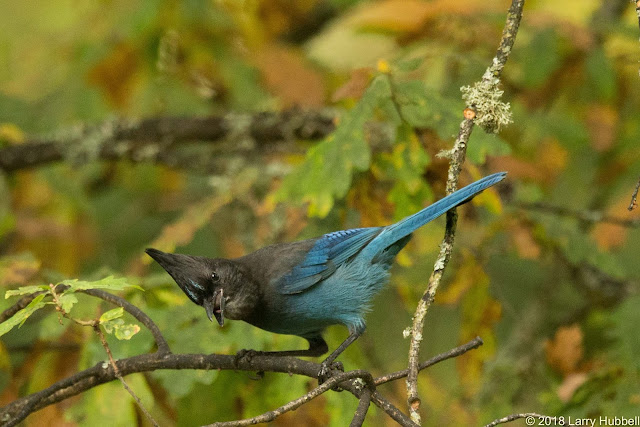 At this angle, the whitish-grey goatee, below the bill, is protruding as well. As I watched the Steller's Jays this week I realized they were partially swallowing whole unshelled acorns in order to transport them and cache them for winter consumption. I suspect that this bird already had at least one acorn in its throat when it added another.

This photo also displays the two light blue steaks on the Steller's Jays forehead. In the 'Rocky Mountain' subspecies, these streaks are usually white. 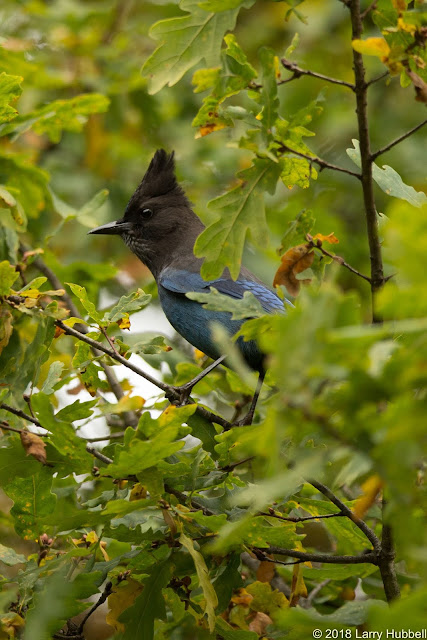 As I watched more closely, I started to notice more jays with protruding throats. 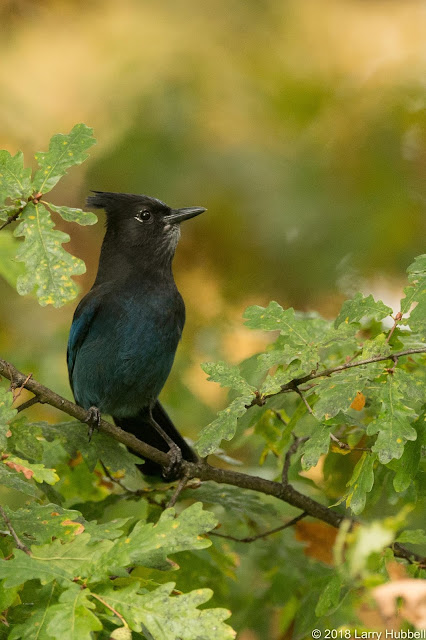 If you compare the last two photos with the first three in this post, you will notice that the throats on these birds are bulging slightly towards the front. In the Food section on All About Birds it says,'With large nuts such as acorns and pinyon pine seeds, Steller’s Jays carry several at a time in their mouth and throat, then bury them one by one as a winter food store.'

Another interesting fact about this photo is the partial white eye-ring. Apparently, this is more common among the 'Rocky Mountain' subspecies than in our local version of the Steller's Jay. In total there are 16 different subspecies. They reside primarily in the western part of North America and in Central America. Wouldn't in be wonderful to see a photo display of all sixteen variations. 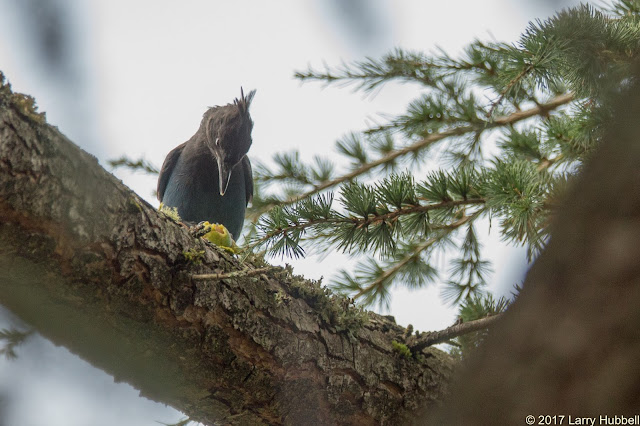 Even before I read about the jays carrying whole acorns in their crop, I remembered watching one break open an acorn in order to consume the nut. It held the acorn on top of a large branch and slammed it repeatedly with its bill. If they are willing to work that hard to open the nuts, then there is no way they are capable of digesting the shelled nuts whole. Logically, the birds which I watched this week had to be 'swallowing' the whole acorns as a means of transportation. 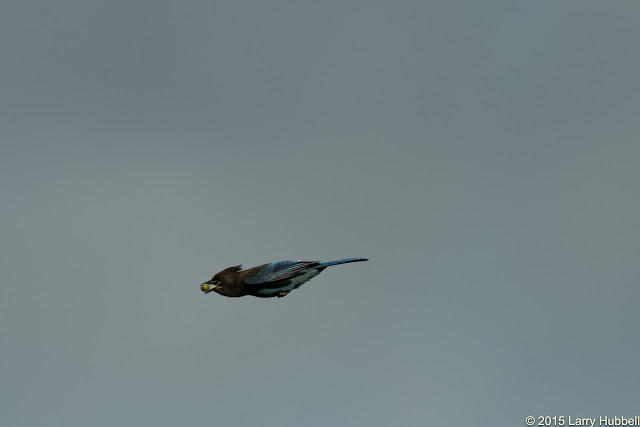 The idea prompted me to take a second look at this old 2015 photo. Suddenly, I realized the jay was not just carrying an acorn in its mouth. The whole neck is obviously enlarged. It was probably carrying two or three more nuts in its crop.

Some birds, like a Cooper's Hawk, may store food in its crop in order to move to a safe location where it can sit and slowly digest the bounty. On the other hand, a Steller's Jay stores acorns for transportation to a suitable hiding spot.

The bird in this 2015 photo, was flying from a Foster Island oak grove to the small, squirrel-free island in the middle of Duck Bay. I have been calling the tiny area Nest Egg Island, but Acorn Island may be more appropriate. 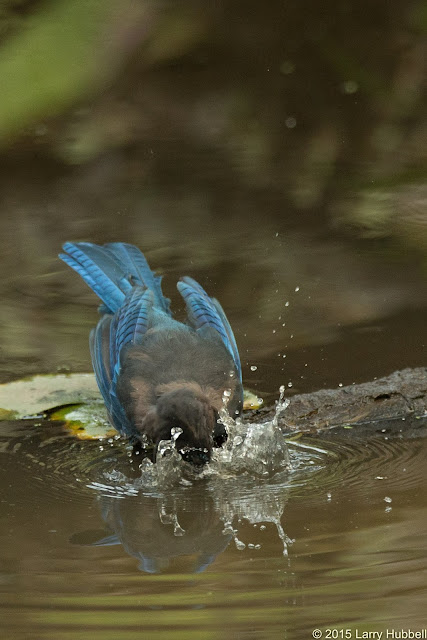 In another 2015 photo, I caught a Steller's Jay taking a bath. I believe the brown feathers on the bird's back are indicative of youth.

Thinking about the color of their feathers reminds me of the following link suggested by John Palka. This post explains how jay feathers can be blue even though they contain no blue pigmentation.

John Palka, who was previously a University of Washington Biology professor, does a wonderful blog titled Nature's Depths. I think you will find it very interesting. 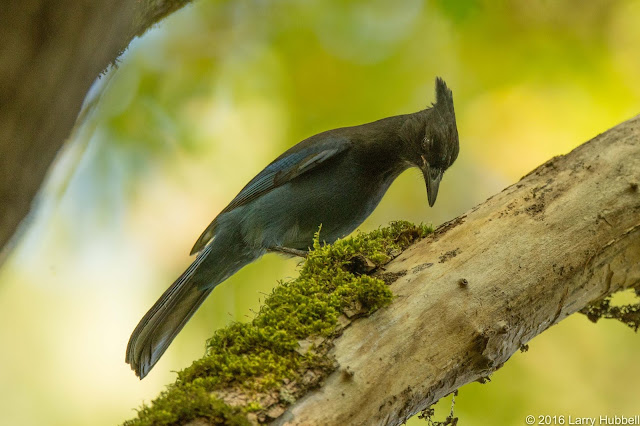 I never get tired of watching Steller's Jays at work. Whenever a jay is in view, I never turn away. In fact, it is usually the jay who finishes its endeavor and with a hop, skip and a jump it disappears into the treetops.

If you get the chance to visit the Arboretum in the next week or two, take a close look among the oak trees. Your odds of seeing a jay in action are pretty good. October is a stellar time to see the Steller's Jay. 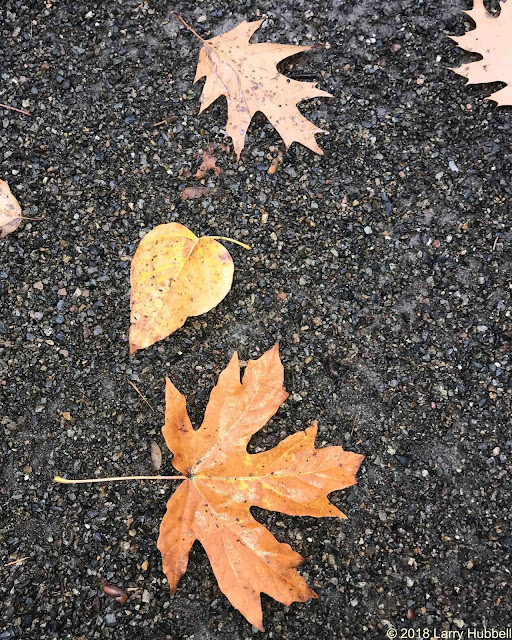 Please excuse my recycling of last week's photo, but it seemed appropriate. Which of these leaves belonged to an acorn producing tree?

The leaf (and a half) at the top of the photo are from an oak tree which originated in the eastern part of North American, probably the Northern Red Oak. These trees are not native to Union Bay, but our local Steller's Jays apparently don't care. They seem to have a love of the acorns from the imported trees.