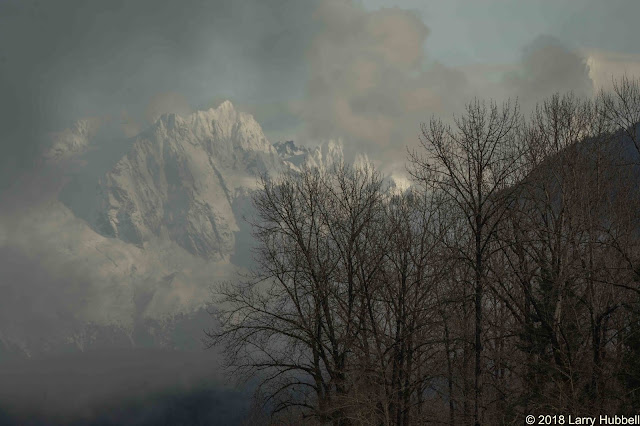 Early on Thursday afternoon, to the east of Rockport, a snow-covered section of the Cascades peaked through the clouds and the sun's warmth began to take a bit of the chill out of the mountain air. After nearly five months of rest and rehabilitation, Charlie's graduation day arrived. 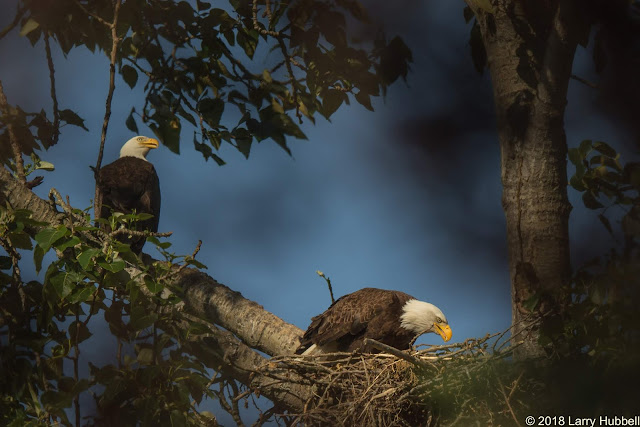 Charlie was the first offspring of Monty and Marsha, the adult eagles pictured above, to leave their nest, beside Union Bay. Technically, we might say the nest left Charlie. A branch broke, the nest shifted and partially fell, and so did Charlie. In the process, the young eagle's pelvis was cracked. Even though the eaglet was nearly as large as an adult, Charlie had not yet learned to fly. A young, flightless and injured eagle on the ground is in trouble. You may read more about Charlie's early struggles, and even see some of his 'baby' pictures, by Clicking Here.

In a more remote location, Charlie would have been highly unlikely to survive. Luckily, Monty and Marsha choose to build their nest in Seattle. Because the nest was in a populated area, it enabled a kindhearted neighbor, to make a timely call to The Progressive Animal Welfare Society (PAWS) in Lynnwood, and Charlie was rescued.

Initially, Jeff Brown from PAWS was uncertain whether the eagle's pelvis would heal. With food, shelter and time Charlie recovered and learned to fly. Thursday was Charlie's chance to return to the wild.

By the way, Jeff mentioned that Charlie's measurements indicate he is too large to be a male Bald Eagle. Charlie is a female, who might be more appropriately named Charlotte. Jeff and the other employees, volunteers and supporters of PAWS in Lynnwood should be congratulated. Once again, they have not only saved a beautiful young creature from almost certain death, they have invested nearly five months of professional care and support, which should enable Charlotte to survive on her own. 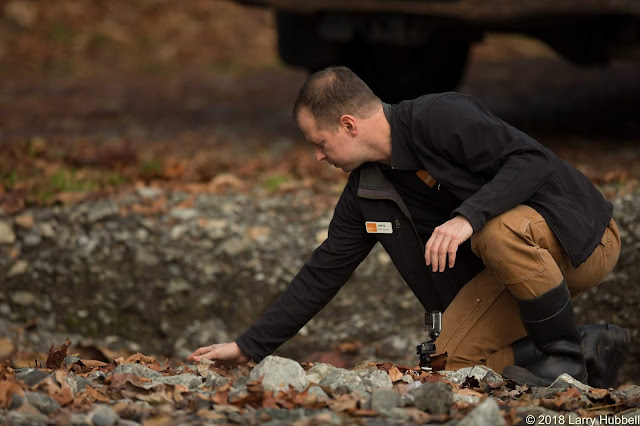 Yesterday, Jeff Brown prepared for Charlotte's release. While in captivity the eagle was cared for from a distance. As little human contact as possible was critical so that Charlotte could maintain her healthy fear of humans. 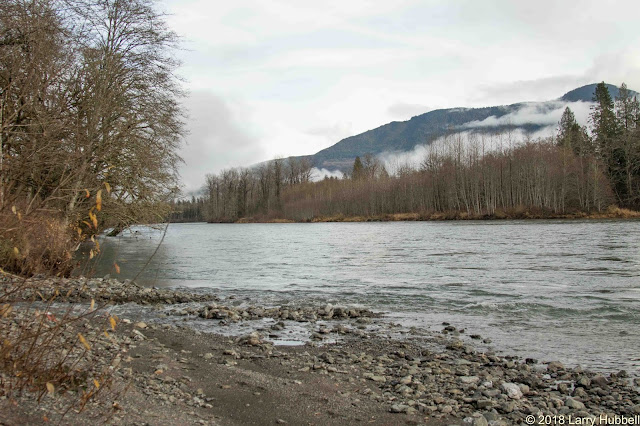 As the river rolled calmly past anticipation built. A pair of adult Bald Eagles watched from a treetop on the distant shore as Charlotte took to the air. 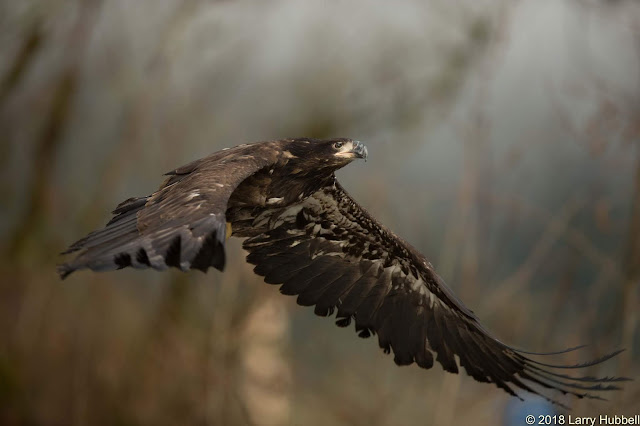 Charlotte's freedom flight was a majestic sight. It will be another four years or so before she is fully mature and ready to reproduce. Still, at this age, she is full-sized and, hopefully, fully-capable and ready to take on the world. 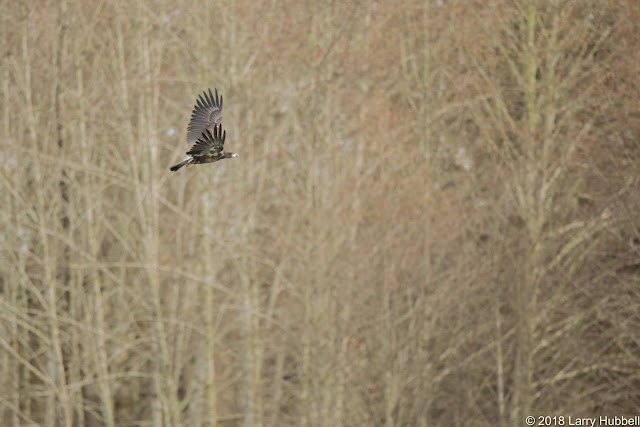 Charlotte circled upriver and then turned and headed downstream. 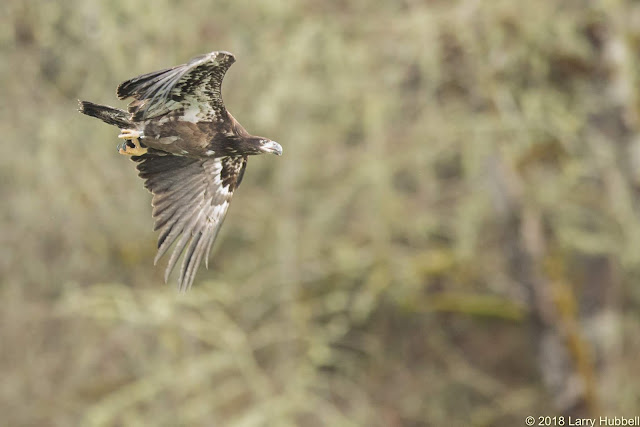 As she passed by, the band on her right leg and her huge talons were obvious. Hopefully, she finds plenty of salmon returning to the river in the near future. It is hard to imagine a better time or place for a young eagle to achieve independence. 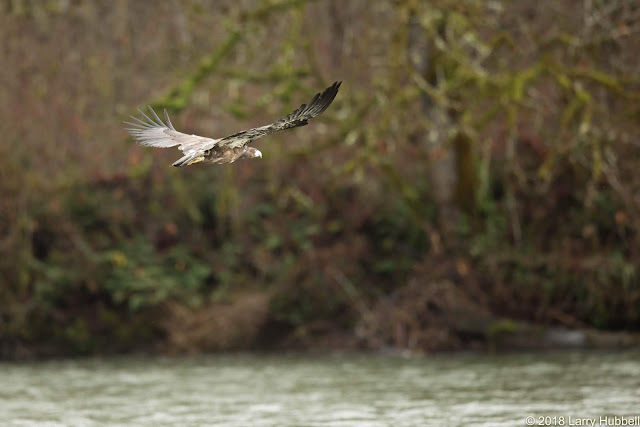 As Charlotte began to disappear in the distance she descended closer and closer to the water. 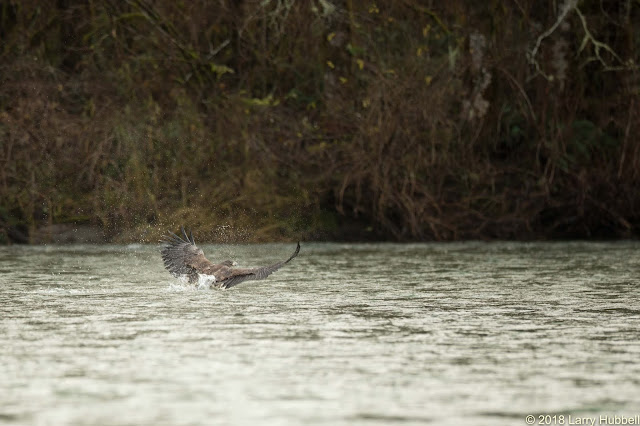 In one of my last photos, she touched down. As we watched she splashed her way closer to the distant shore. Never having seen an eagle released before, I was concerned about her drowning. Later, Jeff mentioned that Jim Watson, the Washington Department of Fish and Wildlife scientist who also watched the process, was very reassuring. Apparently, he has seen other young eagles enter the water and survive.

It was certainly exciting to see Charlotte flying free. I hope she grabbed a fish, paddled her way to shore and had a nice meal. I suspect for Jeff and the folks from PAWS watching her disappear in the distance was a little bit like watching a child leave home. You do everything you can to help them prepare to face the world on their own, you feel pride at their obvious capabilities but there is still a good deal of apprehension about the challenges they may face.

We are all wishing Charlotte the best in her new adventures. 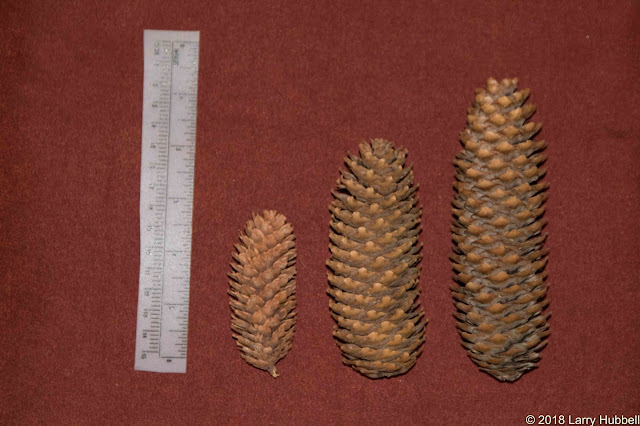 Which one of these cones is most likely to be from one of two species native to Washington state? Which of the two species would have included Union Bay in its historical range?

Both of the following two trees have cones which could be close to 3 inches in length, similar to the cone on the left.

Engelmann Spruce: Is found in higher and drier elevations in Washington, like the east side of the Cascades.

Posted by Larry Hubbell at 1:09 PM