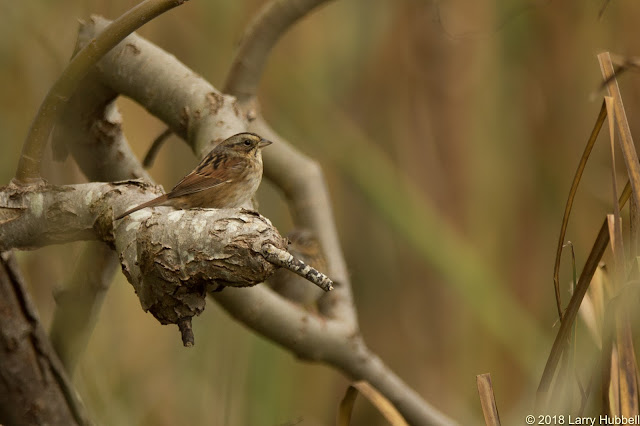 On Monday I visited the Union Bay Natural Area (aka Montlake Fill). I was inspired by a friend and classmate from Seattle Audubon's Master Birder Class. Louis is a young man with sharp eyes, keen ears and an incredible memory for avian details. Not long before, Louis positively identified a Swamp Sparrow at The Fill. Seattle Audubon's free online application, Birdweb, lists the Swamp Sparrow as rarely occurring near Puget Sound, and even then only from November through March. Knowing that Louis had personally seen the sparrow gave me confidence that the bird was really there and worth a search. Even so, I had my doubts about finding the bird, and questions about distinguishing it from other sparrows. In preparation, I reviewed the Swamp Sparrow details in my guidebook.

When I reached the edge of the marsh, all I saw were dried cattails. I could hear male wigeons making their high-pitched 'sneezing' call, out on the bay. The cold wind whistled in off the bay, but on the positive side, there was no rain. A Song Sparrow gave me a brief moment of excitement. Then the waiting and the listening continued. Finally, there was a flicker of motion and a small sparrow came up out of the cattails and landed on a low hanging branch. The combination of a mostly dark crown, the yellow base of the slightly delicate bill and the very slightly-streaked grey chest were all positive hints. It almost felt like the Swamp Sparrow found me. 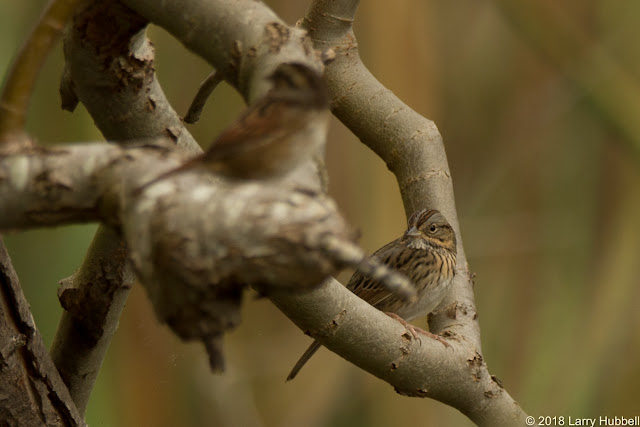 A few moments after the Swamp Sparrow arrived a second sparrow landed next to it. The coloring was somewhat similar. The most glaring difference between the two birds were the dark vertical steaks against the pale orange-brown background on the chest of the second bird. A Lincoln's Sparrow, while not nearly so rare as the Swamp Sparrow, was also a fun bird to find. These are my first photographs of both of these species. 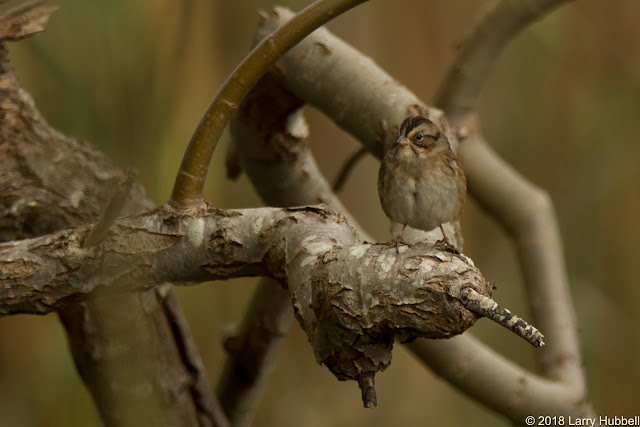 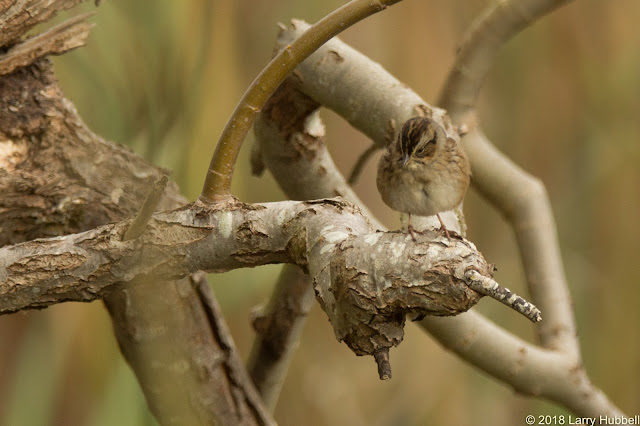 In this case, the dark coloring on the Swamp Sparrow's head appeared broader and not so clearly divided, like the stripes on the crown of the Lincoln's Sparrow. I am not sure if this is a universal difference between the two species or simply individual variation.

The next day I returned to the same location hoping to catch a few more photos. When I arrived, another young man was already there. He was also looking for the Swamp Sparrow. Sadly, this was his fifteenth trip, without seeing the reclusive little bird. It turned out that neither of us saw the Swamp Sparrow, even though we heard some very promising calls. 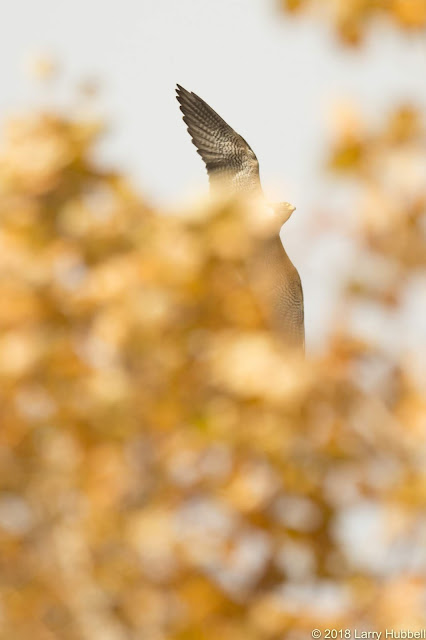 Later, I walked a few feet away and began chatting with a second birder. Suddenly, we noticed a bird of prey circling around the cottonwoods. The crisply pointed wings told us we were watching a peregrine falcon in action. 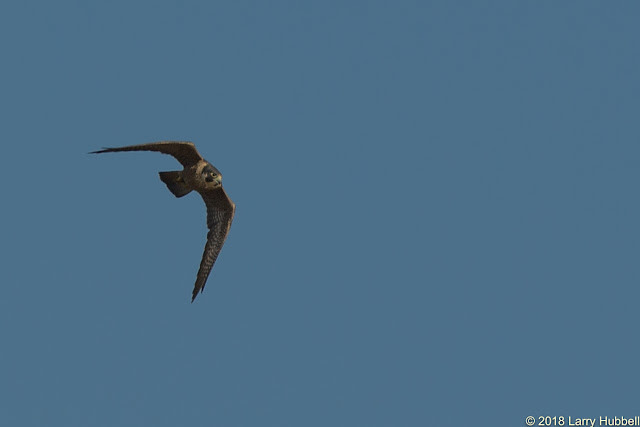 I twisted and turned trying to catch up with the bird and hoping my camera would focus faster than I could. 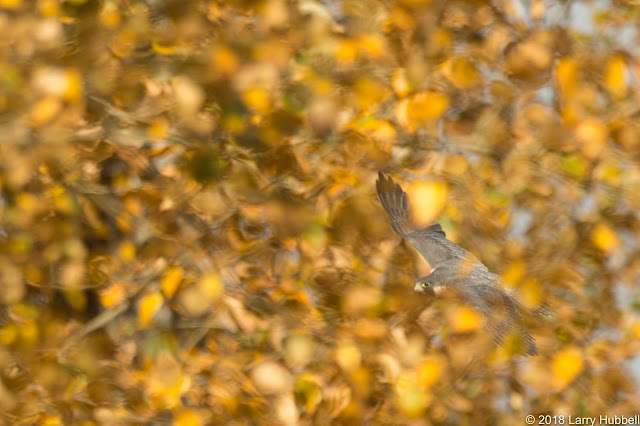 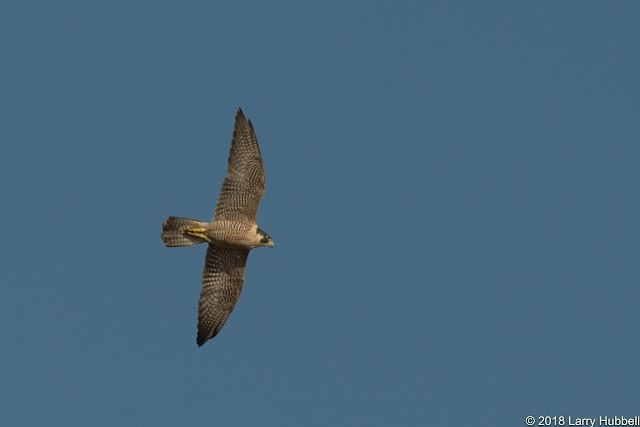 It felt like the falcon was pursuing a smaller bird, but everything was happening so fast, I couldn't even catch a glimpse of the prey. 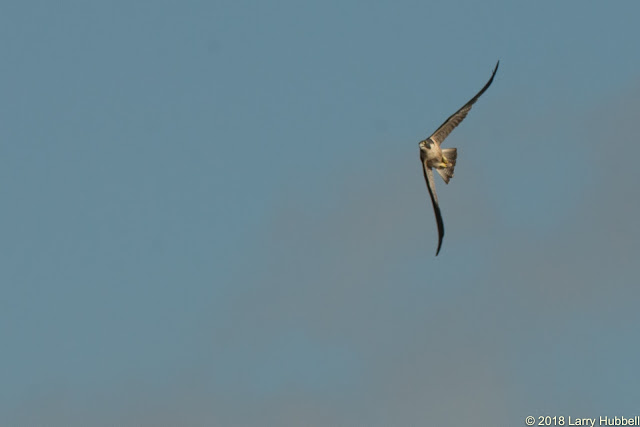 Suddenly, I realized there were two different falcons, both of which were taking turns diving and circling around the prey. I did not see the capture, but moments later, as the falcons began to fly away, I caught a glimpse of a small bird in the talons of the second falcon. The birder next to me saw the falcon drop the little bird as the two of them passed near Main Pond. I was confused.

The constant low-level circling-pursuit was a hunting procedure which I had never seen before - from a peregrine falcon. Previously, I had seen hunting falcons descend swiftly from a great height. Pulling in their wings and, looking almost like a rocket. Their great speed, in excess of 200 mph, making the impact on their prey terminal.

When I reached home, I sent an email to my friends at the Urban Raptor Conservancy. They have decades of experience observing and banding Peregrine Falcons - and many other birds of prey. If anyone could explain what we had seen it would be Ed Deal or Martin Muller. 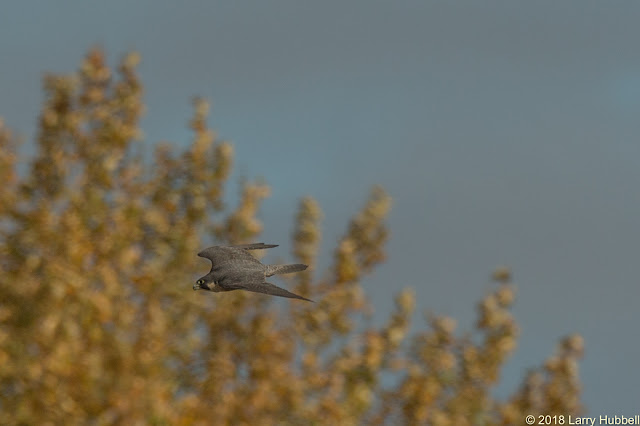 Martin's reply included '...Tandem hunting is part of courtship behavior. Coordinating their actions. Many year[s] ago I watched Stewart and Bell hunt a hummingbird over downtown. They certainly didn't do it for the caloric value of the prey (they actually discarded the prey after killing it, which [is] how we know it was a hummingbird)...'

Peregrine courtship in early November may be the first hint that Spring (and breeding season) will return again. However, Monty and Marsha, the newest Bald Eagle pair on Union Bay, are also providing a timely reminder. On Thursday, I was sitting in my kayak near the east end on Montlake Cut when the sound of an overhead branch breaking caused me to look up. With a branch 'in hand', one of the eagles turned and headed for the same fork in the cottonwood where they nested last year. Eagles do not normally start a new nest each year, but since last year's nest fell, Monty and Marsha must begin again. I have been on pins and needles for weeks waiting to see if they would attempt to nest in the same prime location.

If you missed the story of how the nest fell and the impact on their offspring the following three links will explain last summer's drama.

The good news is Monty and Marsha are at least a month ahead of last year's effort to build their nest. Spring may still be a Winter away but the promise of its return is all around us.

Can you correctly match the photos of these four sparrows with their species' name? The species are: 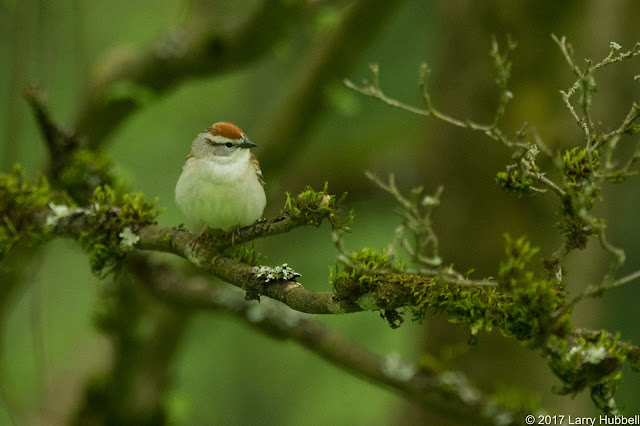 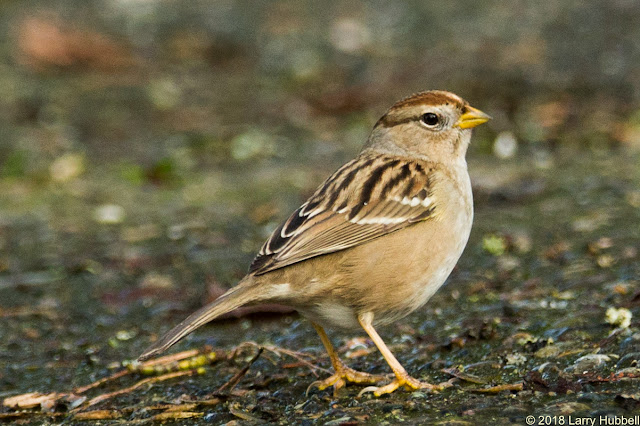 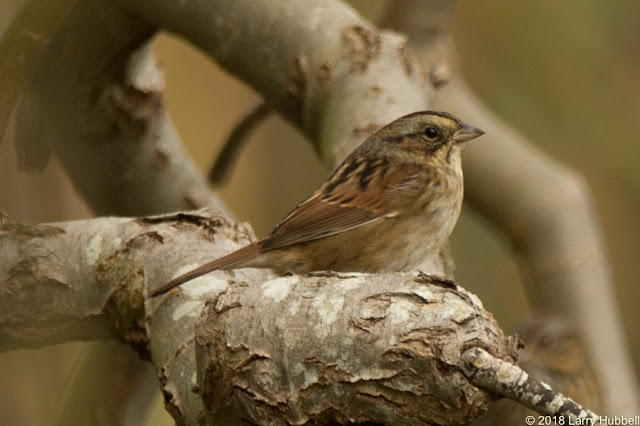 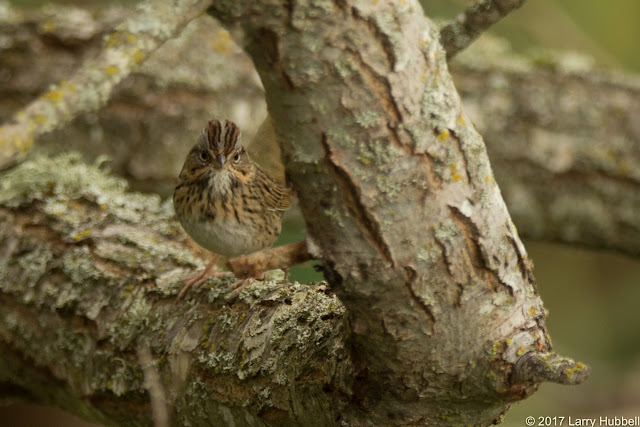 All four species are native to Union Bay, although some are more common than others.