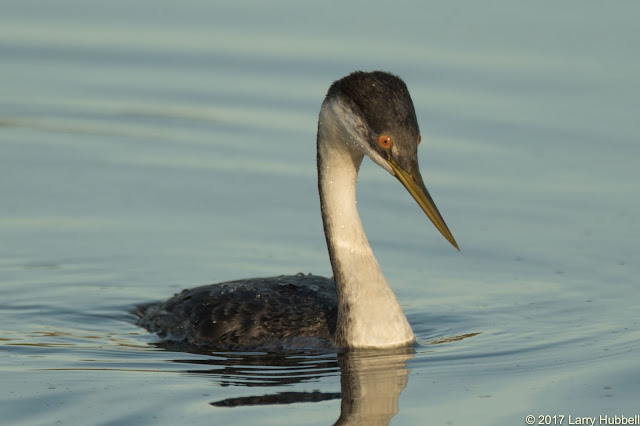 The sharp precision of the bill, the laser-like focus of the eyes and the long, thin neck give western grebes the appearance of elegant assassins. In the fall, when these grebes return to Union Bay our local fish should be scared. 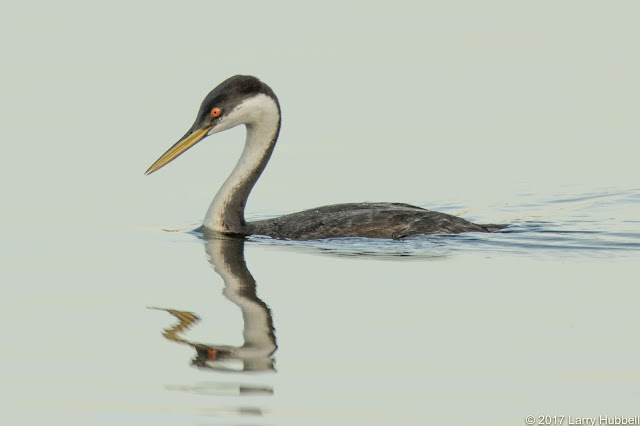 I find it hard to imagine more elegant creatures. The evenly distributed dark and light coloring, off set by the bright eyes and the yellow bill, provide a salve for our souls during the dark days of fall and winter. 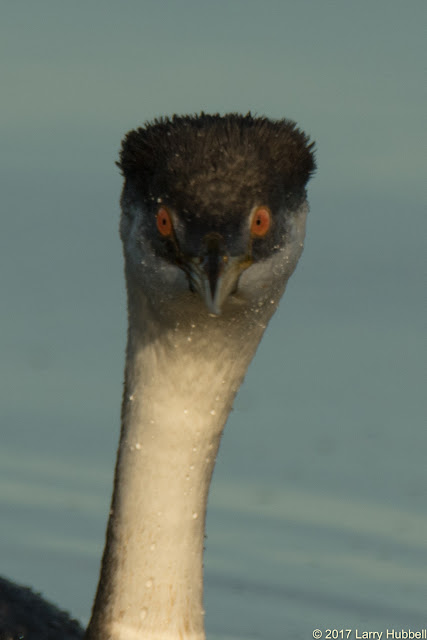 Surprisingly, when a western grebe looks you in the eye its, elegance evaporates. The full frontal view seems to amplify their intensity. Perhaps this fearless stare inspired the phrase, 'If looks could kill...' 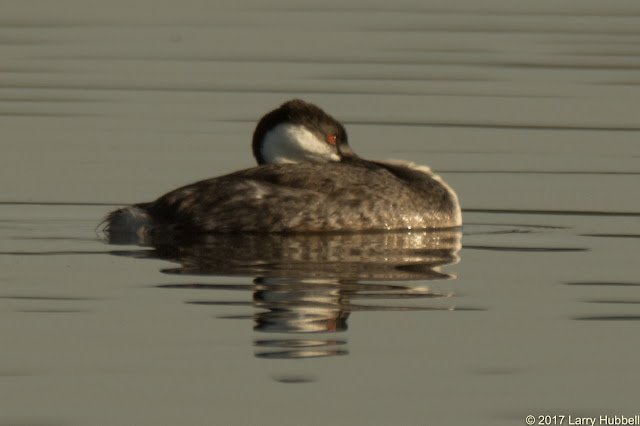 On the other hand, when they relax and paddle in silent circles they look like little toy boats, and it can be very hard to imagine their deadly intentions for aquatic life. 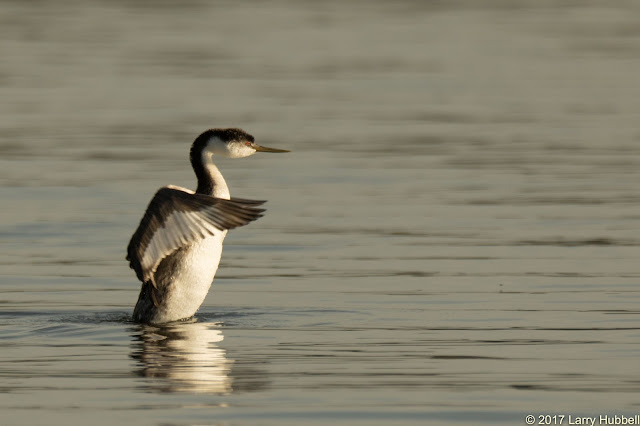 When they stand up in the water, to flap their wings and dry off a bit, you can see how the coloring of their bodies is evenly divided. They are dark above and light below. 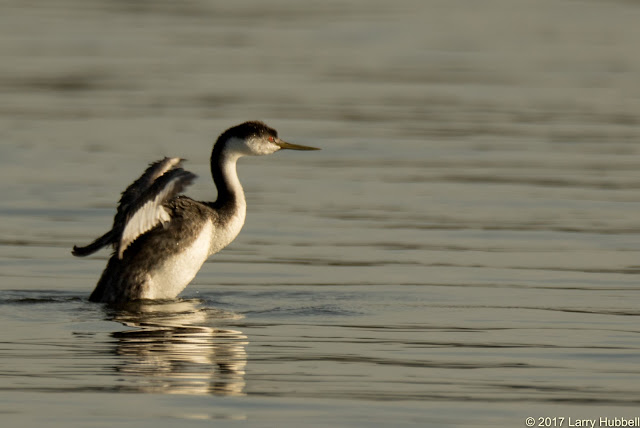 When viewed from below, their white bellies must help them blend in with the sky. Their dark backs help make them less obvious, when seen from above. This type of countershading can also be referred to as Thayer's Law. You can read more about Thayer and his life's work by Clicking Here. 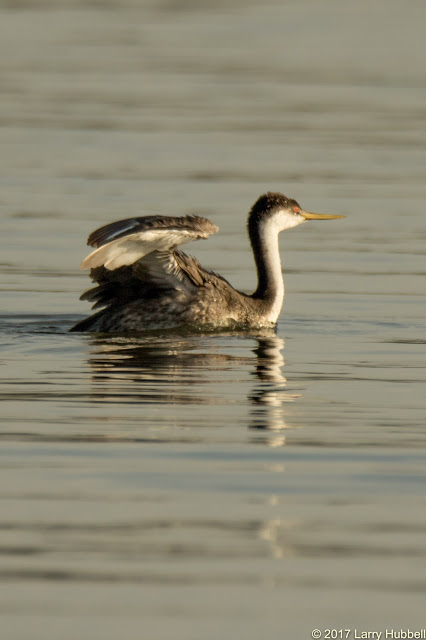 Their wings appear to have a similar distribution of color. 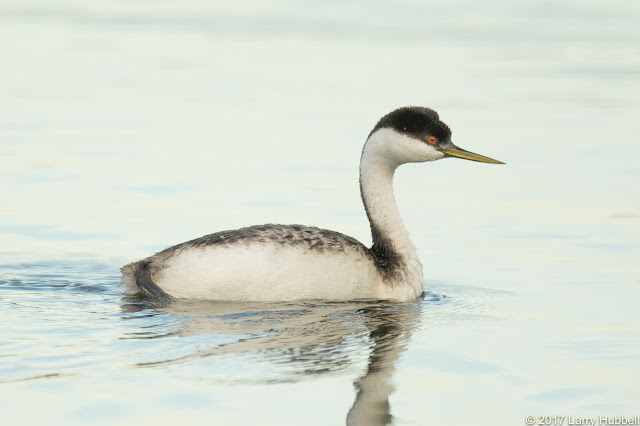 With their feet attached at the rear of their bodies, they can not only stand up in the water, but they can also roll their bodies sideways while paddling about. This 90 degree turn puts the grebe's belly on one side and its back on the other while their head and neck remain vertical. 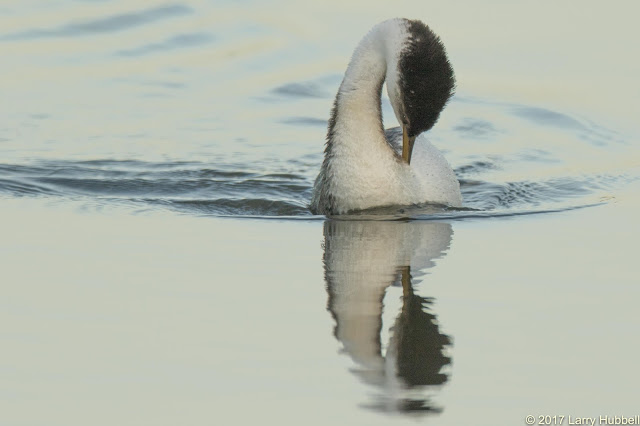 This is particularly handy when preening and cleaning feathers which are normally positioned below the waterline. 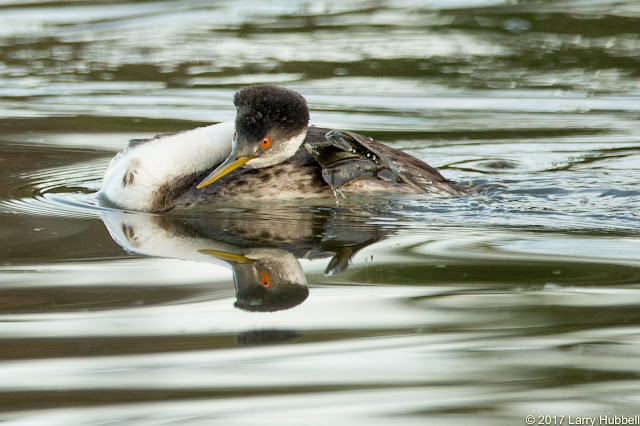 It can also be helpful when attempting to scratch the back of the head. It looks like every inch of the long neck is required for this endeavor. 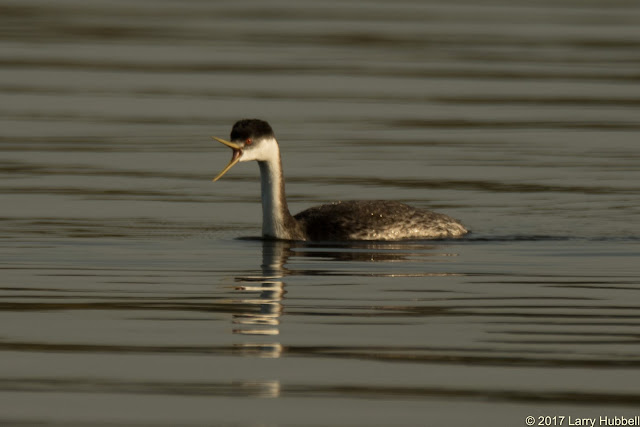 I am guessing this grebe has finished resting and is stretching its mouth before resuming its feeding activities. 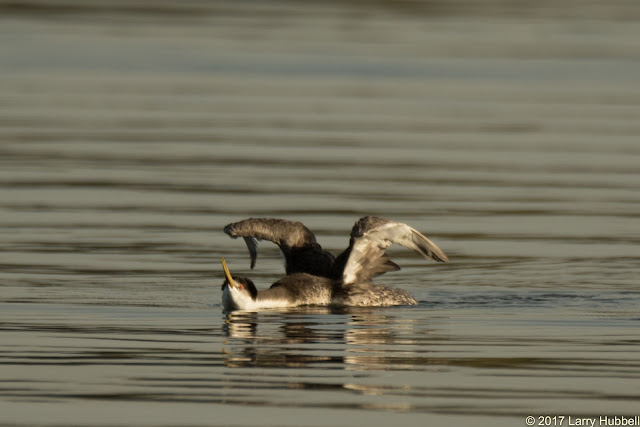 This assumption was reinforced when the bird's next immediate action was to stretch its neck and wings. 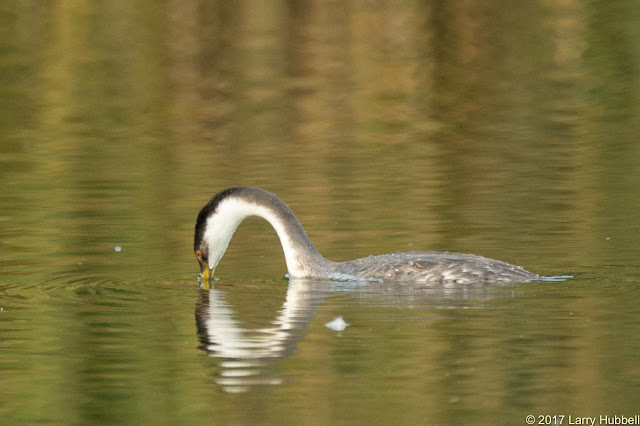 Catching a grebe in the process of diving is quite a challenge. Normally, by the time I am aware that they are beginning to dive, they are gone, leaving only a gentle ripple on the surface of the water. 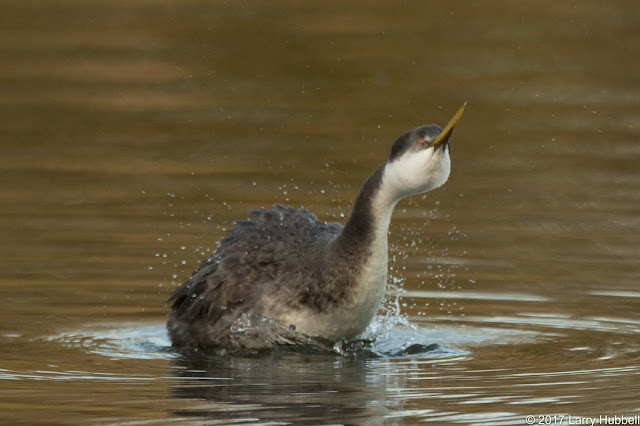 When they come up from a dive they sometimes rid themselves of excess water by shaking like a dog. I must admit that in the case of a canine, the ears flapping from side to side adds a certain element humor. The elegant grebes apparently have no use for humor, or large flapping ears. 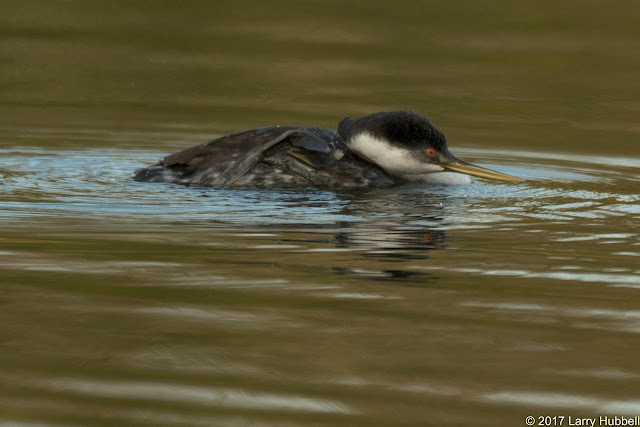 Even though western grebes are generally found in groups, or colonies, they do require a certain amount of elbow room. This bird is coiling its neck and preparing to chase off, or strike out at a bird which has encroached on its personal space. 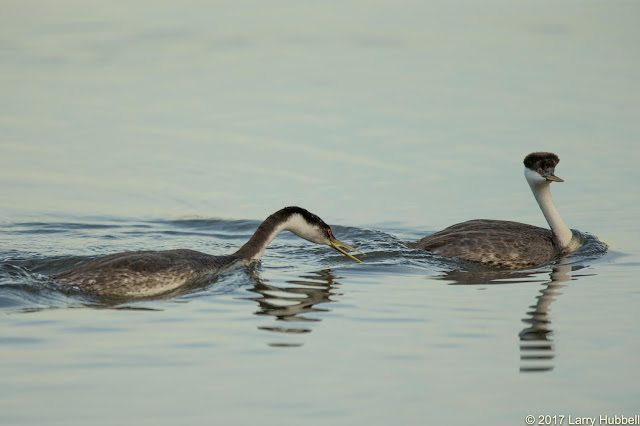 I have yet to see another bird with the courage to stand and fight when faced with the sharp, spear-like bill of an irritated western grebe. 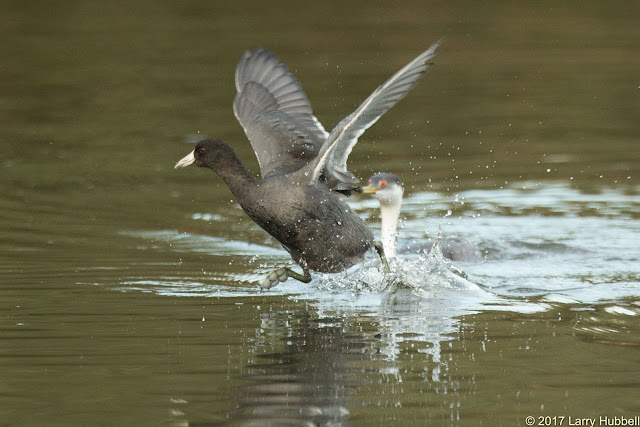 I felt like I could almost hear this coot saying, 'Run, run as fast as you can...' 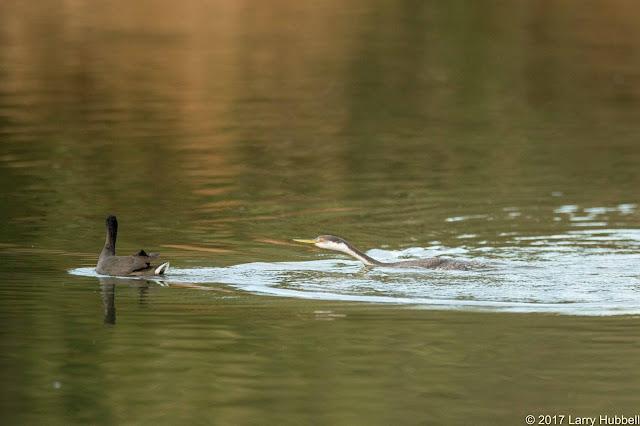 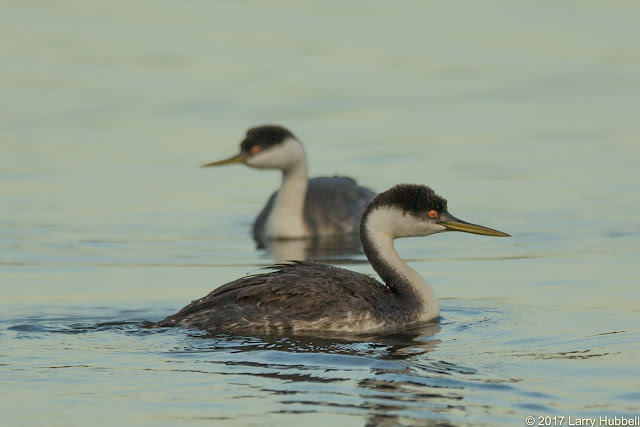 In the past I have only seen from one to three grebes at a time on Union Bay. In October, I was excited to see eight of them swimming near the shell house. Yesterday I spoke with Ingrid, who has seen as many as ten this fall. My friend Andy Jacobson, from my Master Birder class, mentioned that over 300 have been seen at Magnuson Park this weekend. I certainly hope this means their wintering numbers are increasing in the Seattle area. 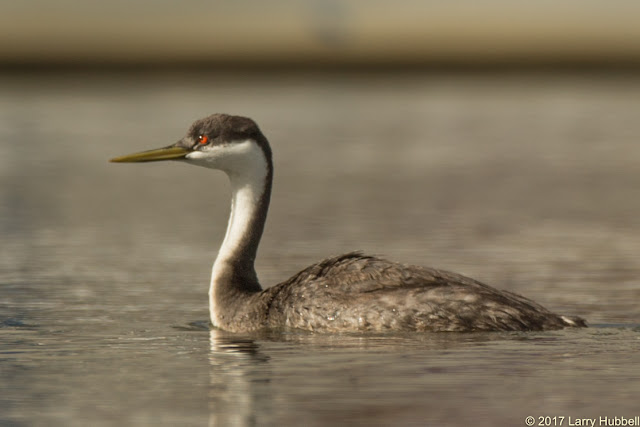 All About Birds states that western grebes are particularly sensitive to pesticides. If you find these birds as beautiful and elegant as I do, you can help increase their odds of survival by utilizing organic or mechanical methods of pest control.

Without a well-funded Environmental Protection Agency, it falls to each of us to be ever more vigilant in protecting our local environments. Native plants and trees encourage the largest diversity of lifeforms because of their long intertwined history with local, native creatures. I have been told that even the microbes in the soil are native to each local landscape. My hope is that we can inspire ourselves, our neighbors and local businesses to plant native flora and to support native wildlife at every opportunity. My intention is to include at least one photo each week and visually challenge us to know the difference between native and non-native lifeforms. Can you identify these birds? Are they native to Union Bay? 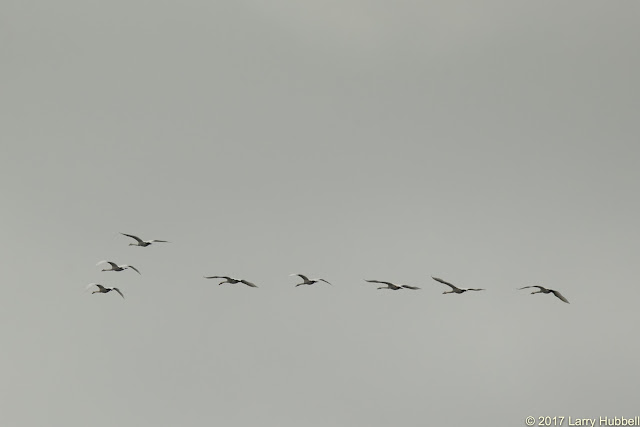 
These are the first Trumpeter Swans that I have seen above Union Bay this fall. Yesterday, I could tell they were Trumpeter and not Tundra Swans by their trumpeting as they flew over. From the photo alone you should be perfectly satisfied with having identified that they were either one or the other. They are native to our area in the winter. I do wonder if their migration patterns will change as temperatures continue to rise.