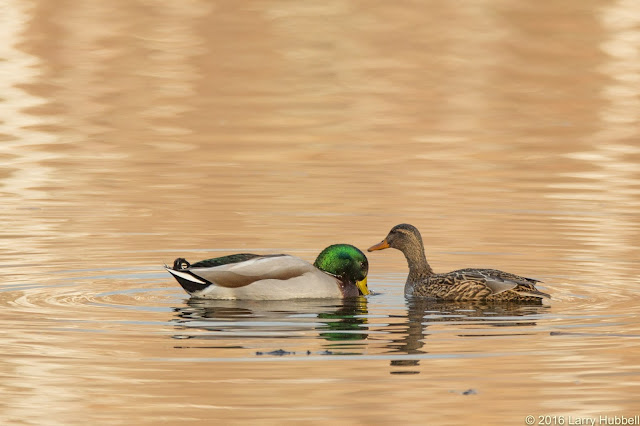 A male mallard bowing his head to his mate.

We tend to believe we are a cut above other lifeforms. We have language, books, television, cell phones and the internet. What other species could possibly compete with us and our sophisticated means of communication? 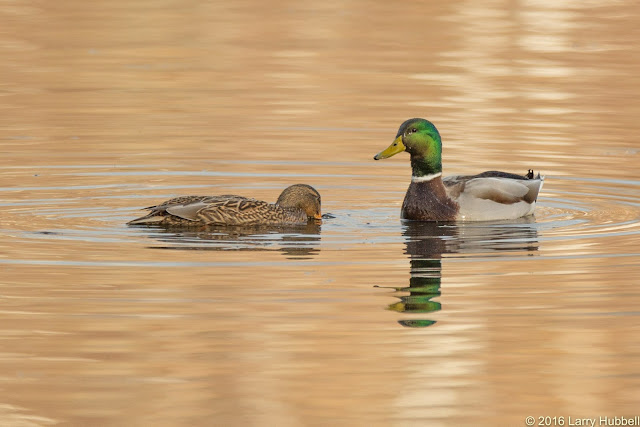 The female mallard sends a reciprocating signal to the male.

Do our accomplishments confirm this lofty view of our abilities? Surely, if we are the masters of communication we should be able to work out mutually beneficial solutions to our problems. Shouldn't our exceptional communications, along with our innate humaneness, result in us being the least violent of all species?

It seem obvious to me that we have not yet mastered communication. I sometimes wonder if our 'sophisticated' intercourse may even be more of a hinderance than a help. The need for college level courses to help students distinguish truth from falsehood reinforces this perception.

Ducks, like the Mallards in these first two photos, can communicate their intentions by simply bobbing their heads. The repetition from both parties communicates receptivity as well as desire. 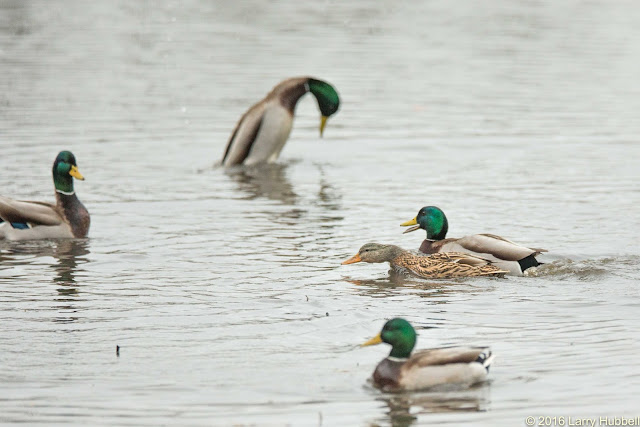 When a female gets undesired attention, she and sometimes her mate, will lower their heads and aggressively chase the unwanted males away. The signals are clear and easily read. Occasionally, the message may be ignored, but I suspect it is seldom misunderstood. 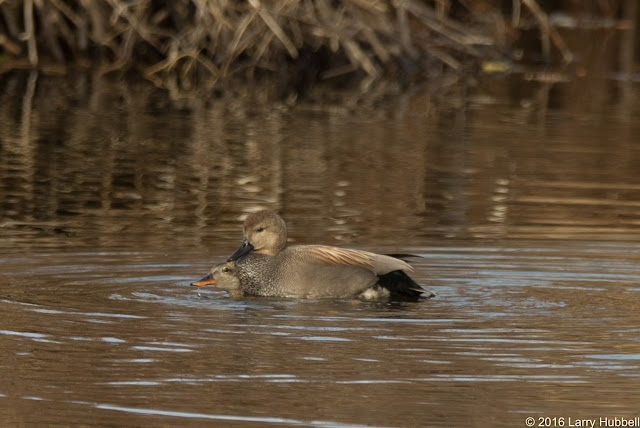 Gadwalls communicate their intentions in a similar fashion and achieve similar results. 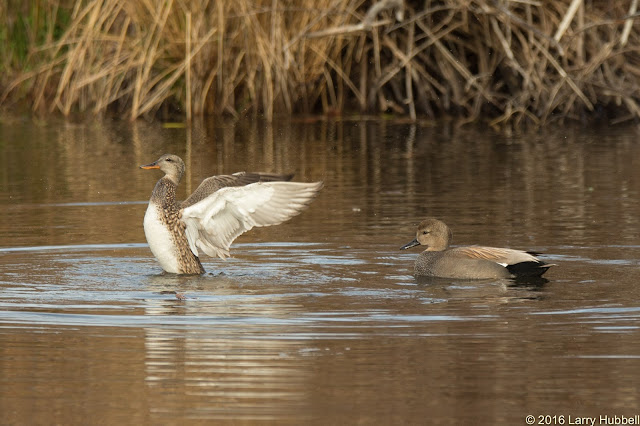 Afterwords, one or both of the birds usually stands up and fans their wings. This no doubt shakes off excess water and straightens their feathers. I feel like it might also be a show of pride. I may be projecting my emotions on the duck's behavior, still the body language looks pretty clear to me

As I was writing the first word of the previous paragraph the literal interpretation of the word, afterwords, crossed my mind. Isn't it interesting that we use afterwords to mean, after any activity, not just the speaking of words. This seems like a clear indication of our predilection to focus on words. Could it be that the creatures who communicate primarily via body language actually suffer less confusion than those of us who use more complex forms of communication. 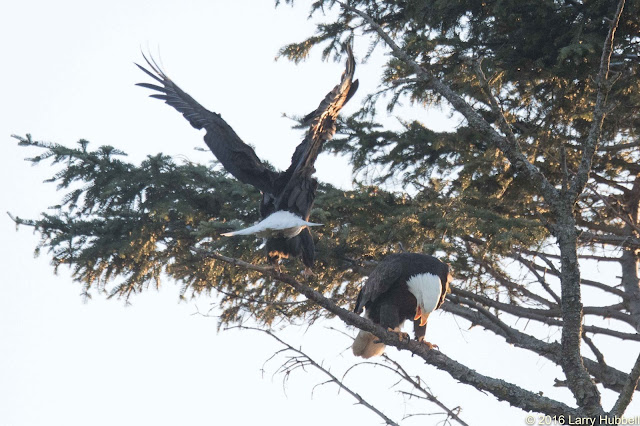 Among tree-nesting birds, when the female assumes a horizontal position it often communicates that she is amenable to her mate's affections. 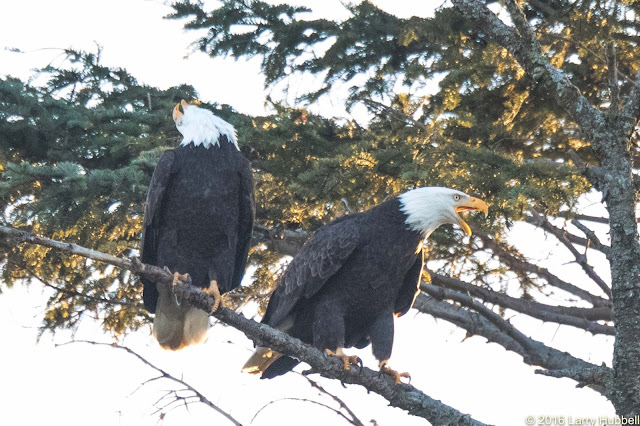 Afterwords, Bald Eagles can be particularly loquacious. Their vocalizations sure sound, and look, like an expression of pride to me.

Among eagles, males are, noticably smaller, than the females. That is Albert, on the left, and Eva on the right. By the way, she is on-eggs and should have young in the nest by Tax Day.

Update: Thank you to Martin Muller for helping me correct my assumptions regarding weight differences between genders among Bald Eagles and Cooper's Hawks. 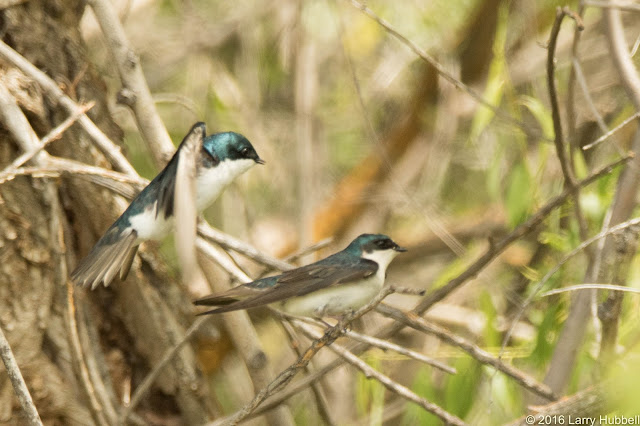 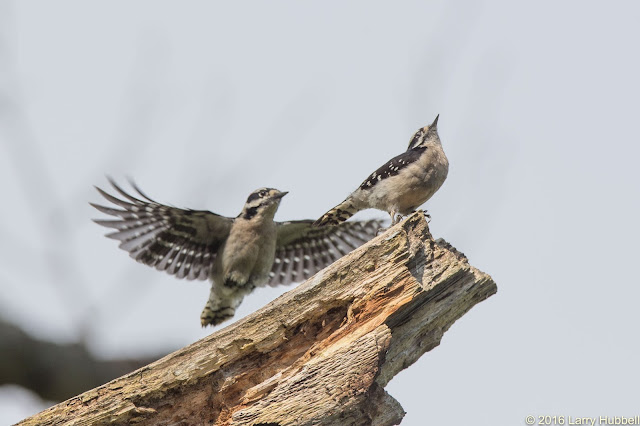 A similar message is sent and received between Downy Woodpeckers. 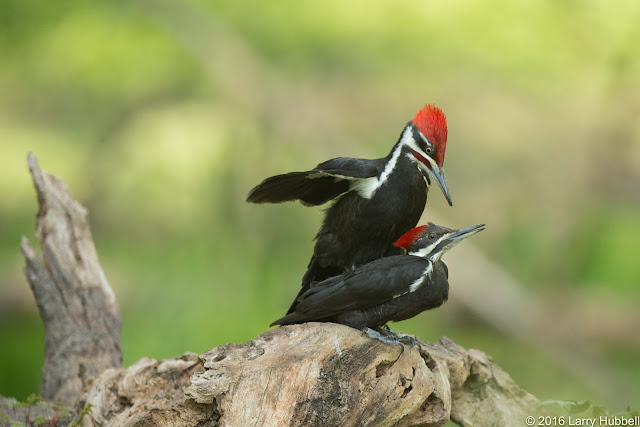 The Pileated Woodpeckers need a more substantial base, but the result is the same. 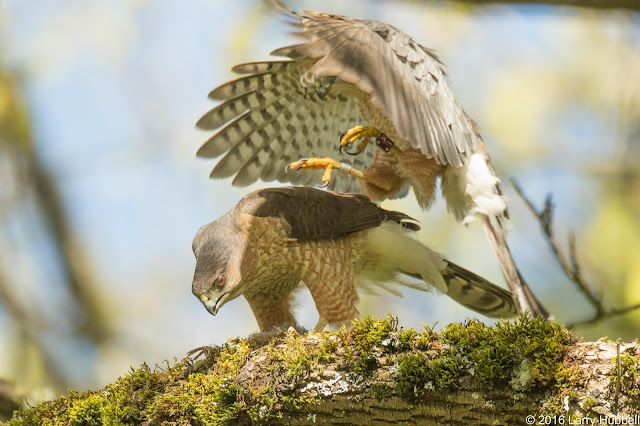 Among Cooper's Hawks, the males are also generally smaller than the females. As Martin Muller once told me, '...and the females eat smaller birds.' I suspect this is why males tend to be especially attentive to the female's needs. They often start out by bringing food to the female, in order to ensure she is in a good mood. It may also be to the male's advantage if the female is not hungry. 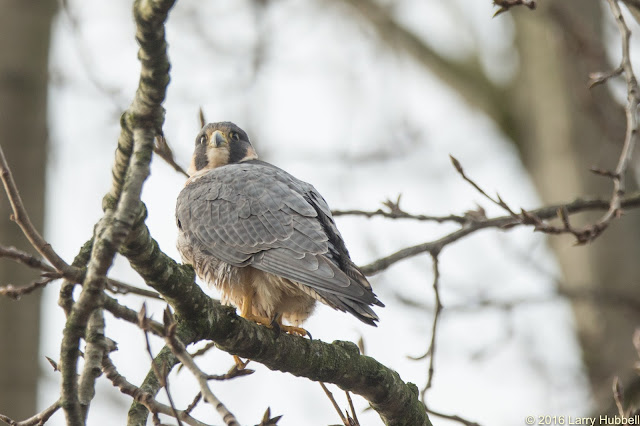 Among Peregrine Falcons, maybe just a look is all it takes. They are the fastest birds on earth. 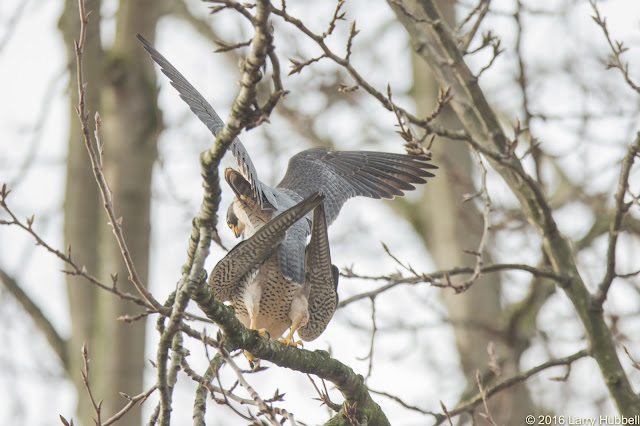 Within ten seconds, the male arrived and they were consummating their relationship. 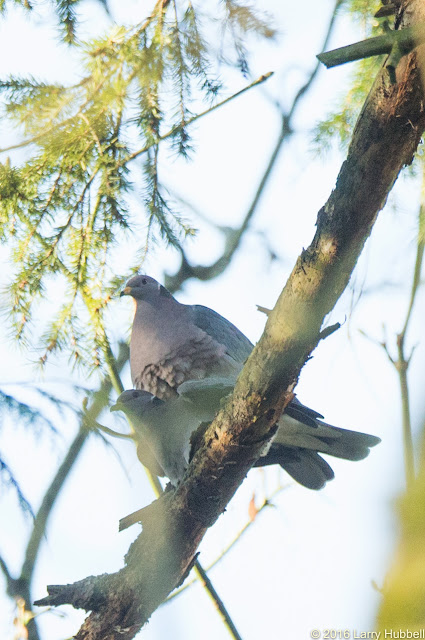 With Band-tailed Pigeons, the communications and the results are similar. 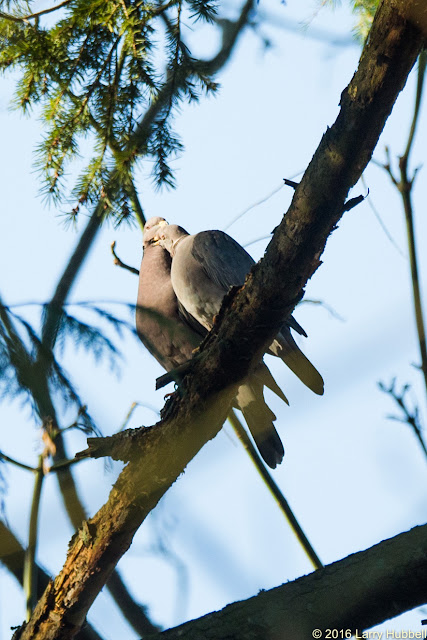 Afterwords, they spent some time preening each other's necks. The technical term for this behavior is allopreening, while it is a functional cleaning behavior, scientists admit there may be some 'signaling' involved. 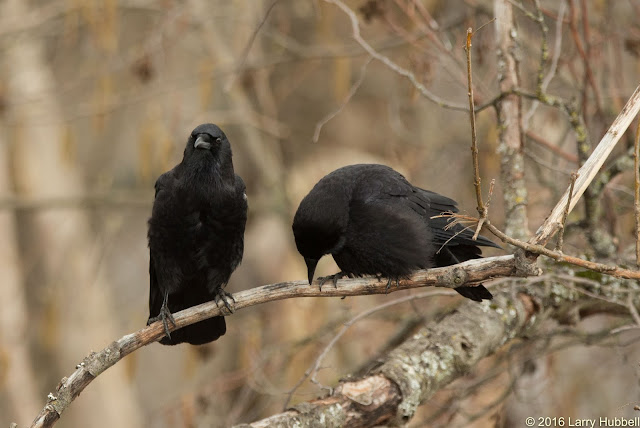 With a pair of crows, the visual signaling is very clear. Extending your head in a submissive posture communicates a desire to have one's neck cleaned 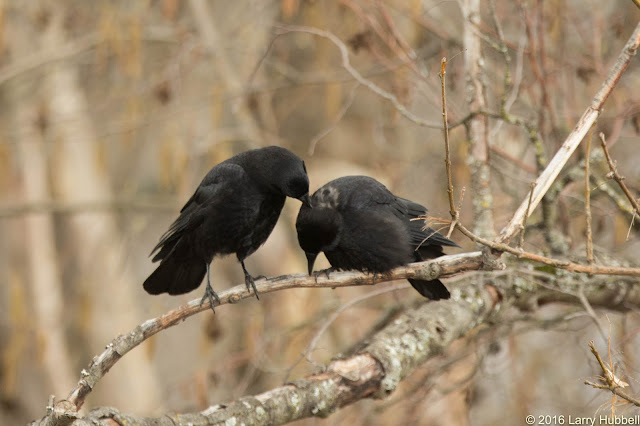 The signal is not ignored. 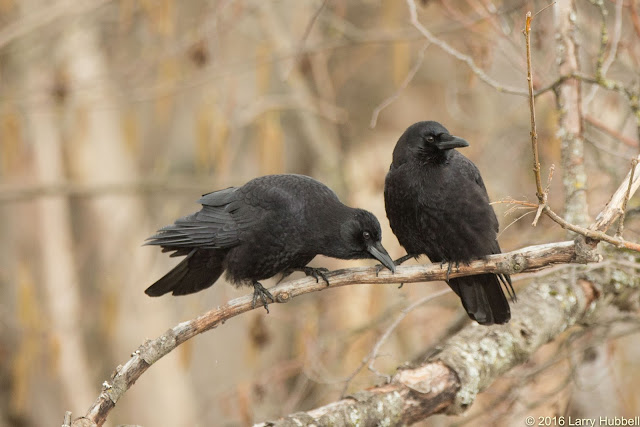 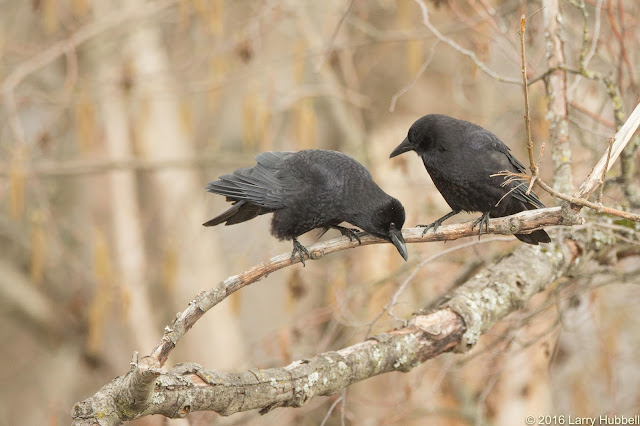 When the mate does not immediately reciprocate the second party bends a little lower. This message certainly looks like the visual equivalent of, 'Pleease!' 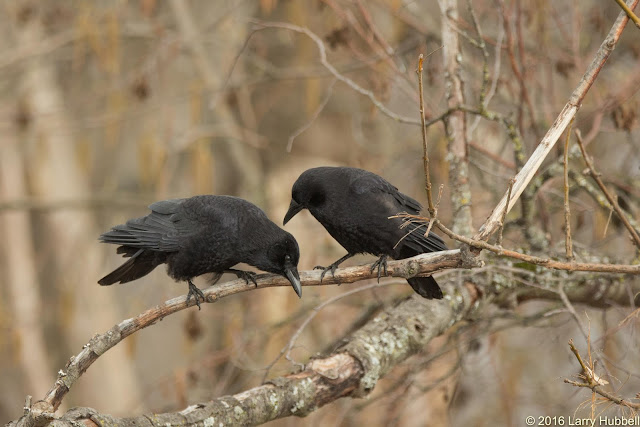 Finally, the signal is received and the initial kindness is repaid. 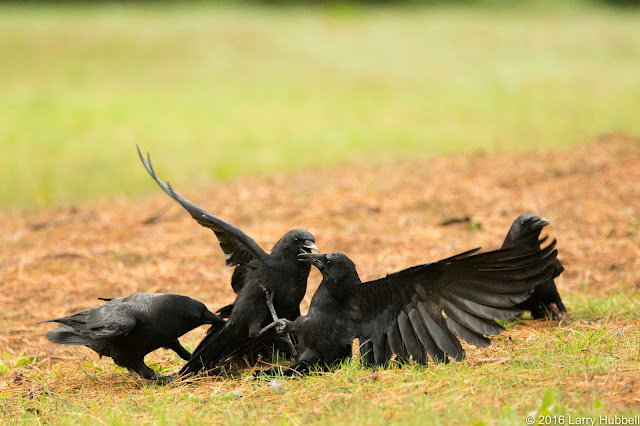 Even with crows, sometimes they simply disagree. I do wonder though, might this have been a case of getting their signals crossed. 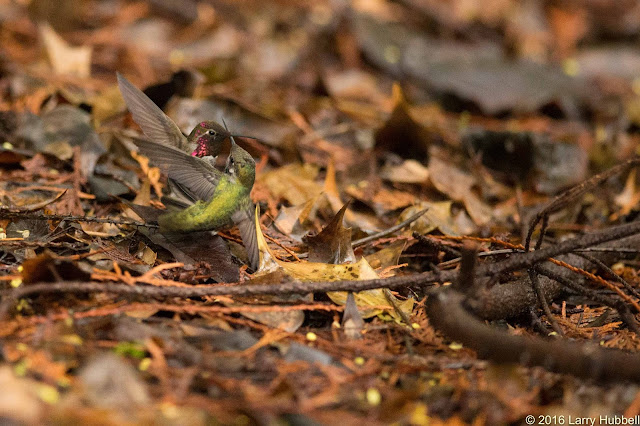 I also wonder about these two Anna's Hummingbirds. I spotted them rolling across the ground, at close to light speed. Was this the result of a disagreement between two males or part of a high speed misunderstanding between mating birds.

In some of the other photos, the second bird's head looked basically green, like a female, and in others there were a few sparkles of red reflections, which made me wonder if this was a young male. Either way, it certainly seems to me as if they may have gotten their signals crossed. 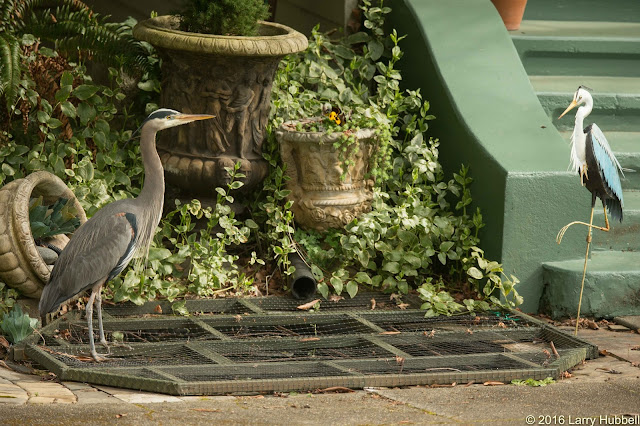 Earlier this week, there was no doubt in my mind. This Great Blue Heron was clearly getting its signals crossed. I can almost hear him thinking, 'My you have such elegant legs!'

Have a great day on Union Bay...where nature communicates in the city! 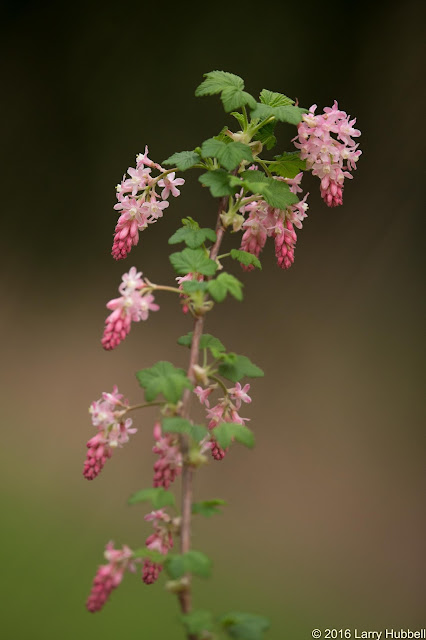 Red-flowering Currant: This is a native species and it is very attractive to hummingbirds, particularly at this time of year. If you find some nearby watch it closely. The female Anna's Hummingbirds can be easily overlooked among the green leaves.

Posted by Larry Hubbell at 1:30 PM