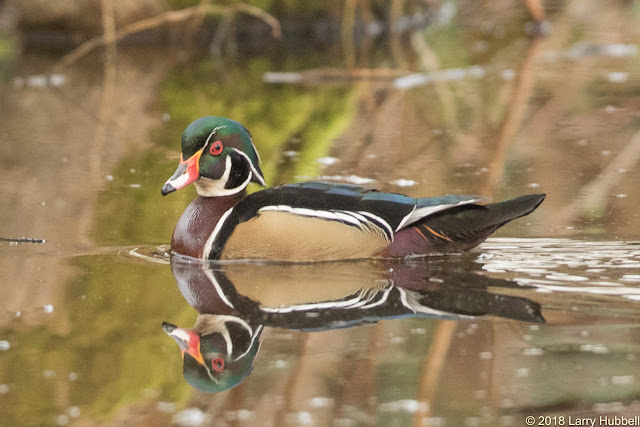 Do we have a beauty bias? I suspect I do. A partial survey of my 2017 photos showed that I saved forty-one percent more male Wood Duck photos, compared to photos of females. 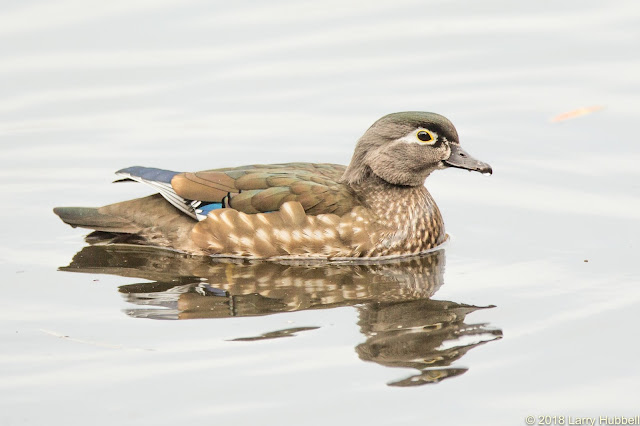 There is no question that males have brilliant eye-catching colors. Which makes it obvious that females have an eye-for-beauty. If the females started picking less colorful mates, in a few generations the beauty of the male's would fade.

I am starting to think I may be under appreciating female Wood Ducks. Not only do they select their mates, they make other tough decisions as well. For example in last year's post, 'The Housing Crisis', we saw the female aggressively looking for a nesting site. The male just hung around and looked pretty, but he didn't really do much.

While searching for nest sites, the males follow the females from tree to tree, and then just sit and watch. I assume that a male might chase off another male competing for their mate's attention, however I don't remember ever seeing this happen while they are away from the water and wandering among the trees. 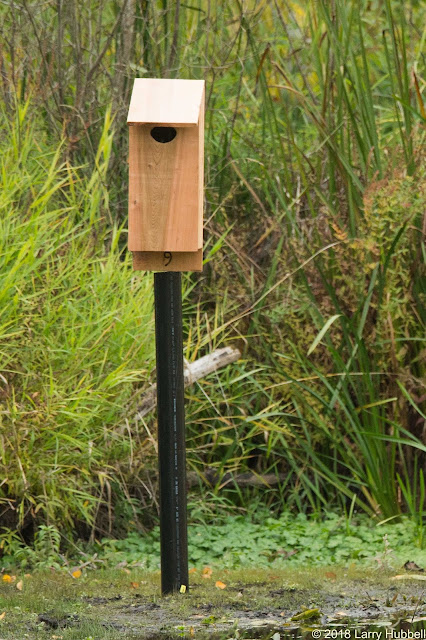 Speaking of nest sites, last fall four friends and I built ten new Wood Duck boxes and placed them around Union Bay. Unlike Mallards and many other common ducks, Wood Ducks nest in tree cavities. The boxes help to replace the trees (and cavities) which have been excluded by human development. You can read about our efforts in the post, It Takes A Village. 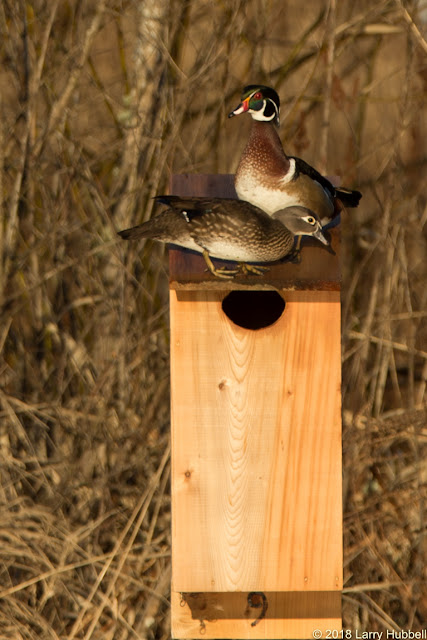 On Tuesday I noticed a pair of Wood Ducks inspecting Box #9 next to Nest Egg Island in Duck Bay. Click Here to see a map which shows the location of Nest Egg island. This box can be observed from the walking bridge on the S.W. corner of Foster Island. The male stood like a beautiful statue while the female wandered around the top of the box. She peered over both sides and the front of the box, obviously attempting to decide if it was safe to enter. 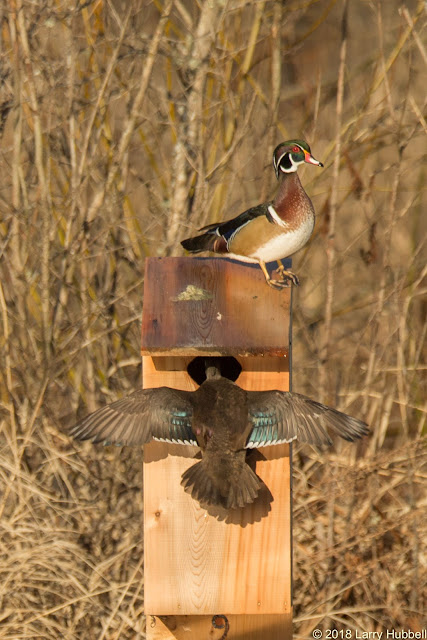 In the end, the female decided to go for it. It was my first time, to watch a Wood Duck enter one of our new boxes. It was also nice to notice her aqua-blue speculums and the white tips on her secondary feathers. Female Wood Ducks do have beauty, it is just a bit less obvious. 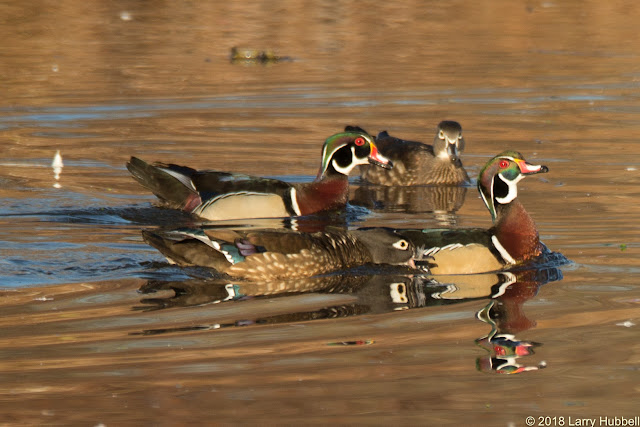 After the female finished her inspections and left the box, it looked to me like a second female with her mate in tow, began chasing the first female's mate. 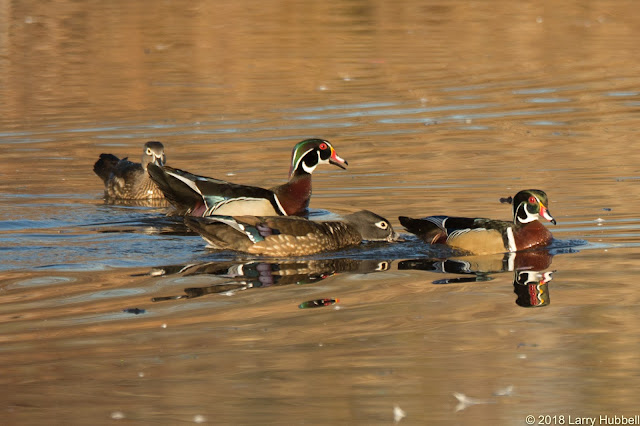 The male was wise enough not to argue with a female intent on securing a potential nesting location. 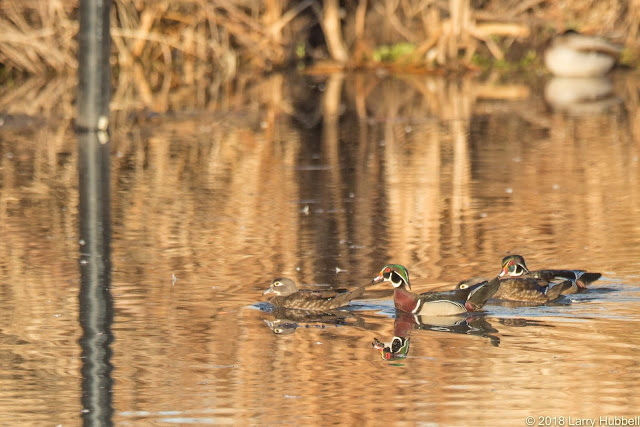 The first female and her mate turned and headed in the opposite direction. 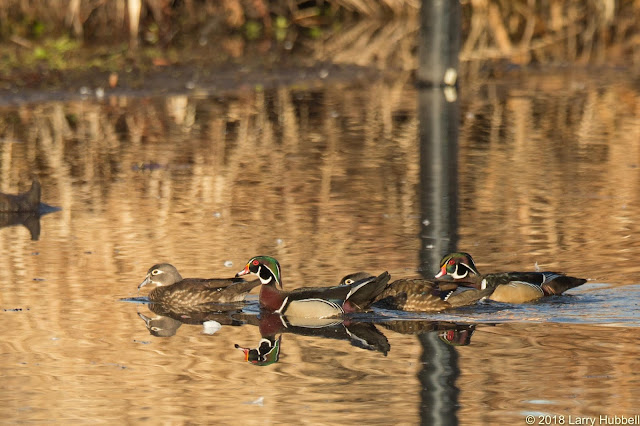 The more aggressive female chased after them holding her head down near the water. This lowered position helps extend the neck and improves the odds of nipping a target duck. 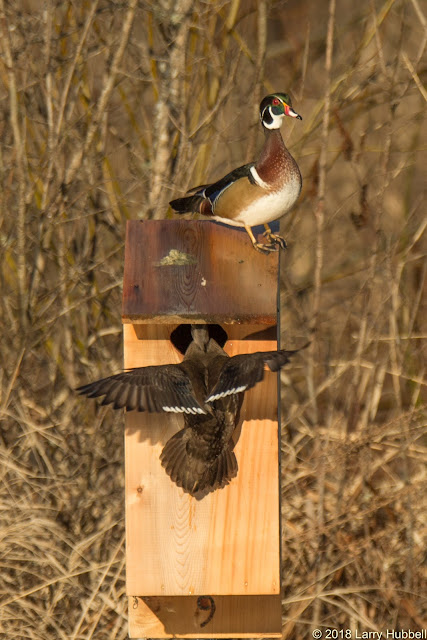 After the first pair left, the more aggressive female decided to enter the box as well. 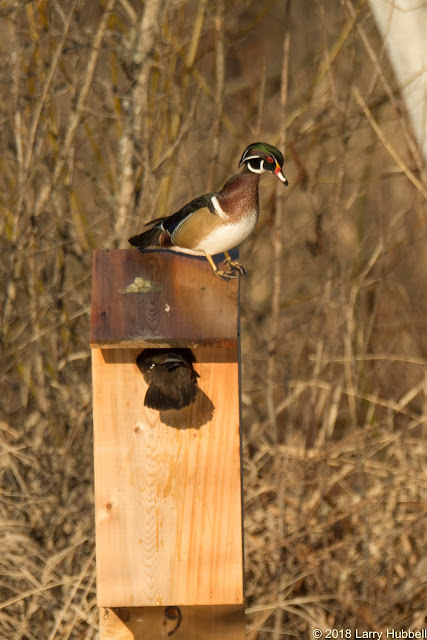 Notice how little the male does during this whole process. 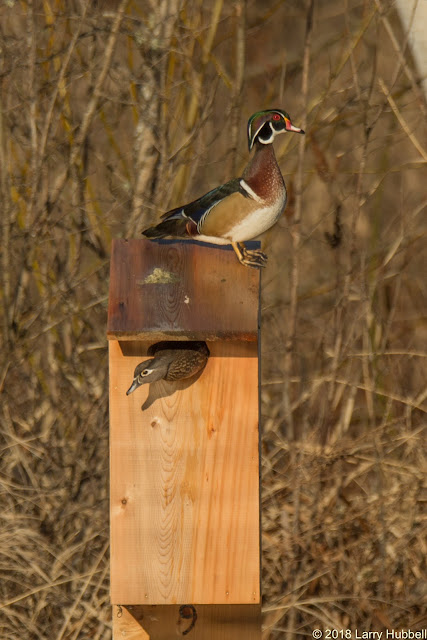 After making sure the box was in proper order, the female decided to leave the box and return to defending the area.

Afterwords, while observing the photos, I noticed that the white facial markings on the two females were somewhat different. For example, the tail of the white eye-lining teardrop is smaller and a bit more pointed on the second female. This made me want to look more closely at other photos of female Wood Ducks.

Clearly, this 'tear drop' is radically different. It is from a female seen the day before in Yesler Swamp on the north side of Union Bay, near Box #1.

This female was also photographed on Monday, but near the UW Baseball Field next to the northwest corner of Union Bay, not too far from Box #3.

A week ago Thursday, this female was photographed near Box #8 on the south side of Union Bay, next to the northwestern portion of Foster Island. Her white facial markings are especially unique because they include some of the white cheek markings which look surprisingly similar to the white 'fingers' on the cheeks of male Wood Ducks.

An astute Wood Duck observer might wonder if this bird is actually a male Wood Duck, in eclipse plumage. There are two reasons why that is not the case. One, I am pretty sure eclipse plumage is a late-summer-to-early-fall phenomenon.

Secondly, in eclipse plumage (like this photo) the males retain their bright red irises and generally lack the tear-drop eye lining.

I think that the beauty of the males has distracted me from paying attention to the far more varied and potentially interesting female Wood Ducks. Could it be that the females can be distinguished in a manner similar to Orca Whales? Is every female identifiable by her unique pattern of facial markings?

This photo, and the next three, are all file photos taken in the Arboretum during 2017. The white facial markings on these four females all seem to be unique, although the first and the third are similar, but still different.

What is really interesting to me is that this photo looks very similar to the second bird in my initial set above. Could this be the same bird one year earlier or could it be a close relative? I wonder if the feather patterns on the female Wood Ducks remain identifiably consistent from one year to the next, even while they replace and grow new feathers.

Notice how the white lining around the base of the bill is much thinner than on the first bird in this set of four.

This poor bird lacks a tail on her tear-drop. Her photo was taken in August of 2017, and the short feathers make me think that she was a first year bird. I wonder if that plays a part in her oddly shaped tear-drop.

In any case, it will be especially fun to watch the Wood Ducks this year. We will get to watch the beauty of the males, the potentially unique markings of the females and ultimately dozens of new young ducklings as they hop out of our new Wood Duck boxes and immediately begin feeding on the surface of Union Bay. 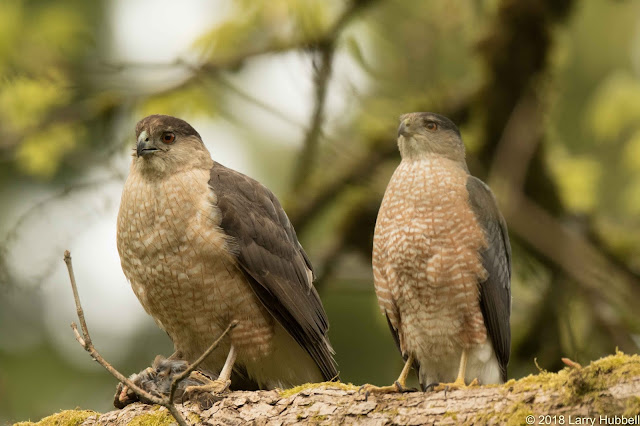 My friend Ed Deal, Master Bander of Cooper's Hawks and Peregrine Falcons, will be presenting an exciting review of his Seattle-based Cooper's Hawks Banding Study. Ed's March 24th presentation will almost certainly contain unique information, photos and video from his esteemed partner, Martin Muller, and plenty of humor as well. Ed and Martin have spent every Spring morning for years getting up before sunrise to watch our local hawks. Even their casual comments, often contain surprising nuggets of accipiter knowledge. I have no doubt the presentation will be worth every penny you spend - plus there will be biscuits. Click the link below to find out more: 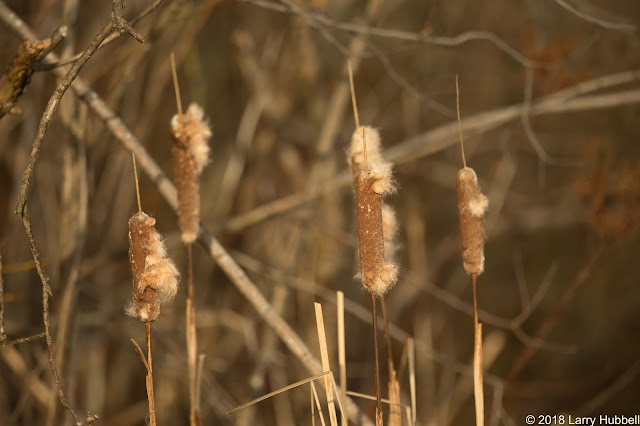 
Scroll down to see the answer!

Cattail: Yes, cattails are native to Union Bay. This time of year they are particularly interesting because of the variety of birds which will pick off the soft down-like material to line their nests.