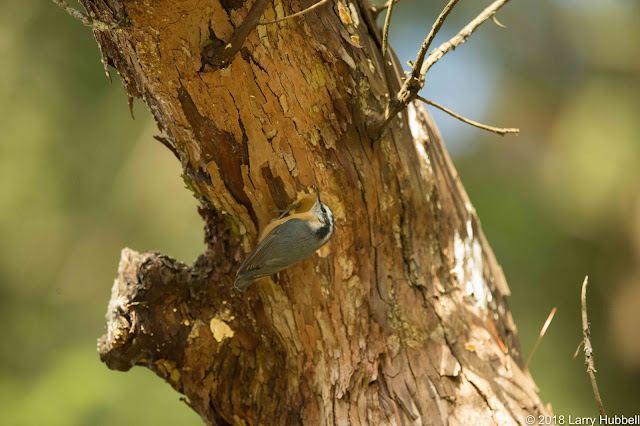 March 1st may seem a bit early to be hunting for hints of Spring, but I found it a surprisingly warm, sunny and productive day. Spotting a Red-breasted Nuthatch excavating a nest hole in a dead branch was my first obvious hint. 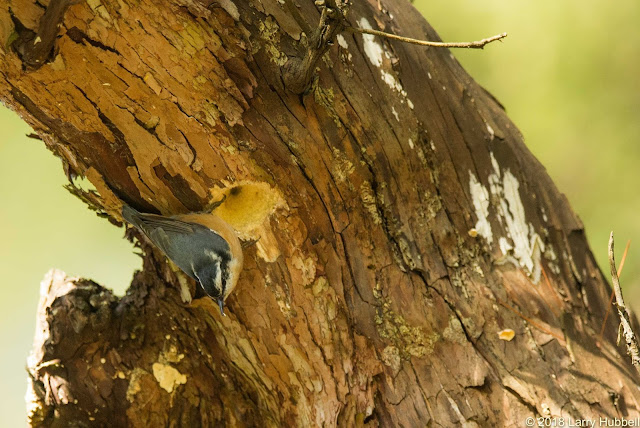 If you look very close you can see a tiny speck of wood on the tip of the nuthatch's bill. It is hard to imagine the strength of the nesting urge which drives these small creatures to invest in such a labor intensive effort. On the positive side, I do think the dead branch is hollow which should make their job easier - the dark center in the middle of the fresh hole indicates to me that the heart of the branch is missing. 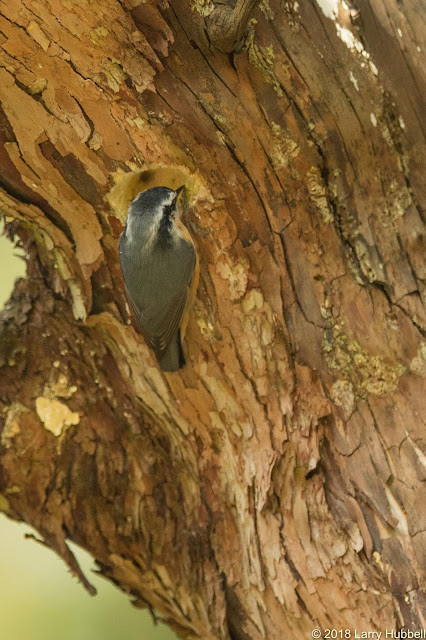 The coloring of this female nuthatch is very similar to a male's plumage. 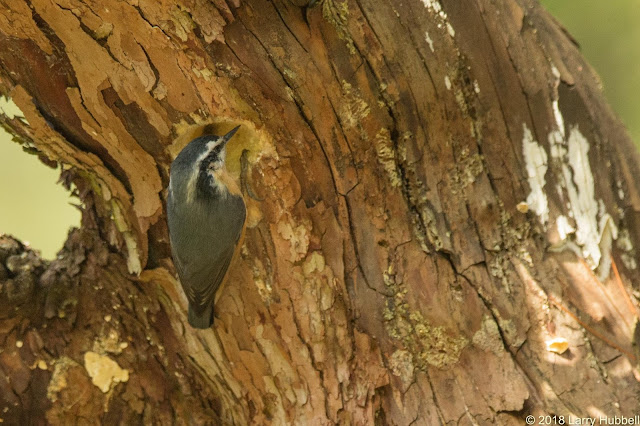 She is a bit lighter in some areas. Notice how her dark cap fades quickly away. This results in the reverse side of her neck being essentially the same color as her back. 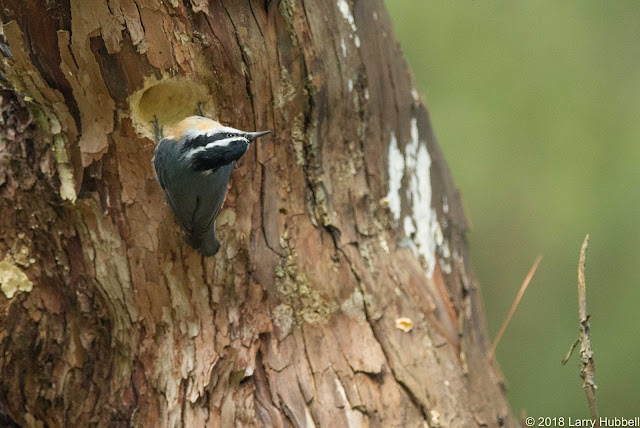 Later, the male took a turn. This photo shows that his dark cap extends much further down the neck and creates a fairly crisp transition to the blue-gray of his back. The extent of the black on his head also makes his white supercilium, or eyebrow, much more crisp than on the female. 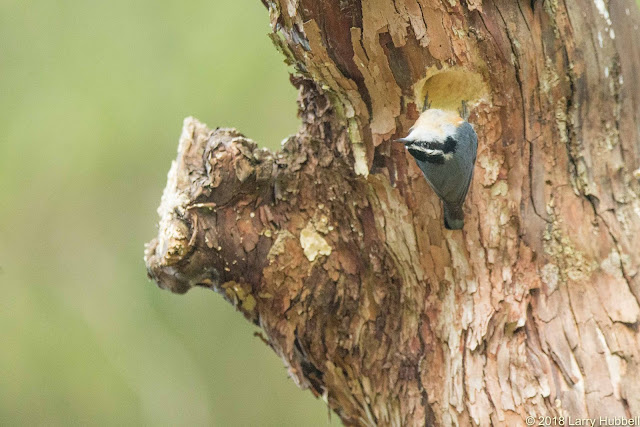 Even when his head is totally upside down, the male appears to have no trouble visualizing
the world. 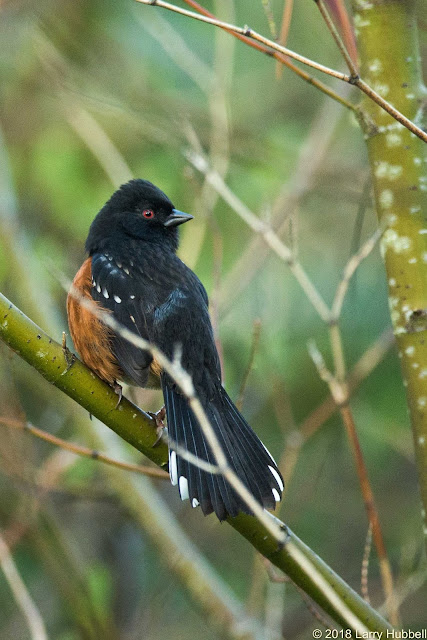 Not far from the nuthatches this male Spotted Towhee was calling. 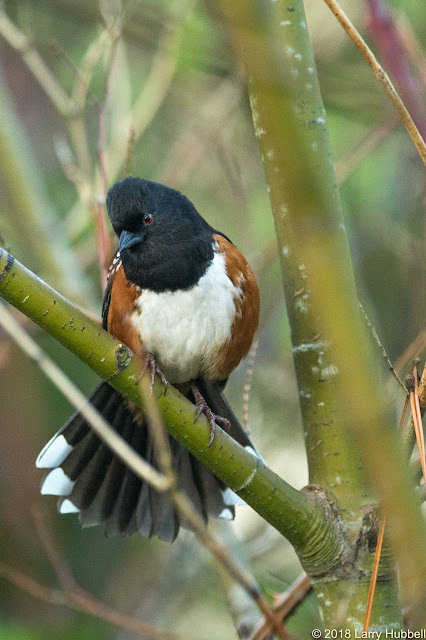 I believe the widely spread tail feathers are a territorial display proclaiming to other males, 'Stay away, I am uniquely strong and handsome. You can't compete with me!' 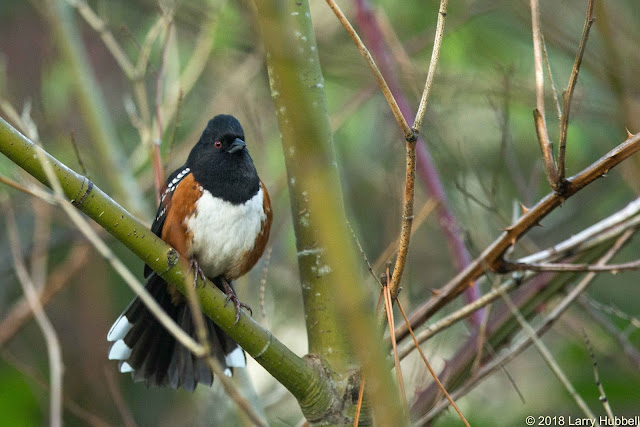 The towhee turned around and held his tail widely spread for a number of minutes. It was an obvious display which also indicates that Spring is coming. 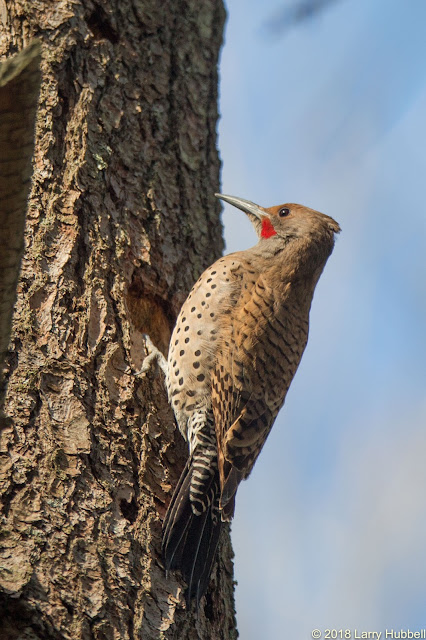 Nearby, a male Northern Flicker softly pecked at the wood around a hole in a dead snag. In his case, there was no evidence of damage to the bark. I suspect his soft drumming was an auditory territorial display. Later, a female flicker came and inspected the hole. She did not actually go inside. Maybe she was just getting a progress report. 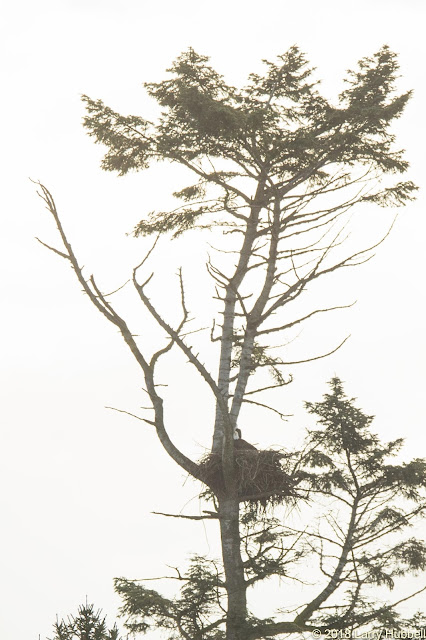 Another hint of Spring was evident when I watched Albert, the male Bald Eagle from the Broadmoor nest, pull a branch off a cottonwood tree and head back to the nest. Afterwords, each time I checked the nest both Albert and Eva were sticking close to home. 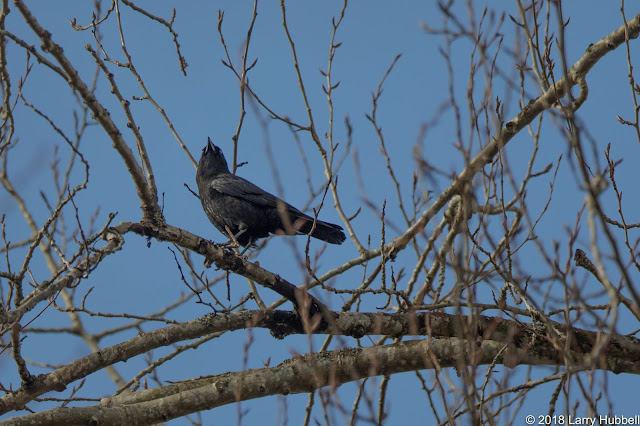 Later, I saw a crow who was also collecting nesting material. Luckily, the crow stopped to rest on the way to the nest. None the less, the little twig under the crow's foot, is a bit hard to see. 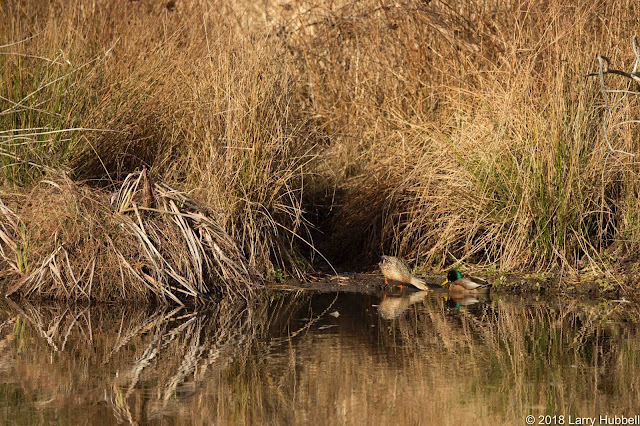 This female Mallard repeatedly took a little something from the water and then turned and walked back into the darkness behind her while the male waited patiently. I suspect she was building a nest. 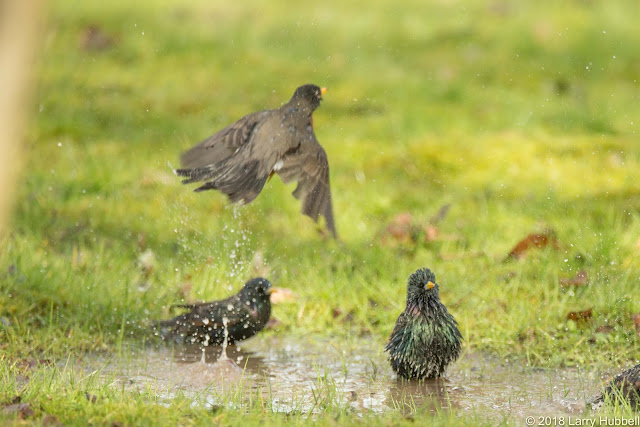 Out on Foster Island, I found a number of birds bathing in a small puddle. 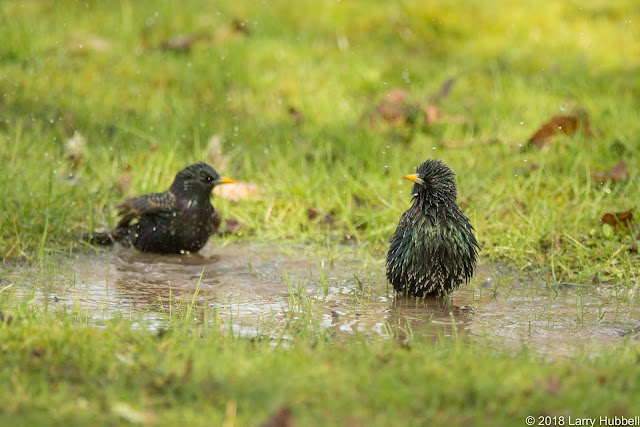 The European Starlings seemed to particularly enjoy the water, while I enjoyed their comical wet-feathered look. 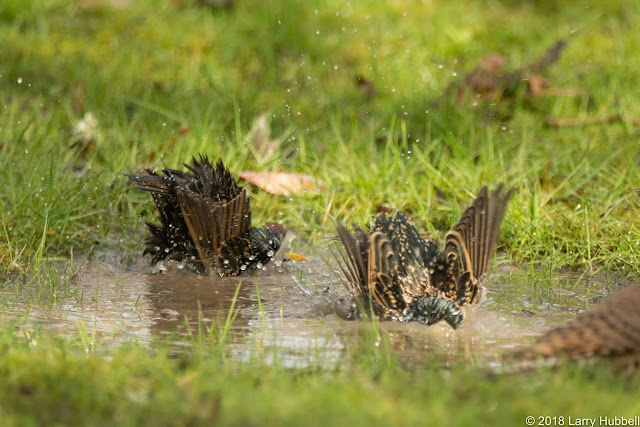 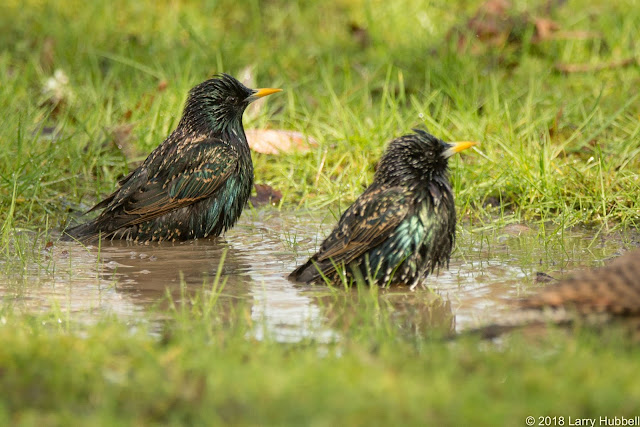 For now, as Spring approaches, I must admit the starlings are looking particularly attractive. By the way, the bluish tint at the base of the bills indicates these birds are male. Interestingly, females have a pink tint in the same location. 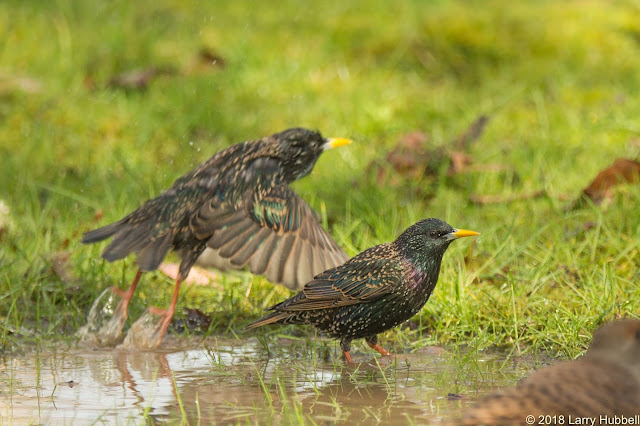 Also, since their bills turn yellow as the breeding season approaches, they provide another a hint that Spring is on the way. The last early sign of Spring I observed was a pair of wood ducks circling around under one of our new Wood Duck boxes. They circled about, south of the Foster Island floating walkway as the sun began to set. Box number 8 can be seen from the east end of the walkway which connects Foster Island to Marsh Island. 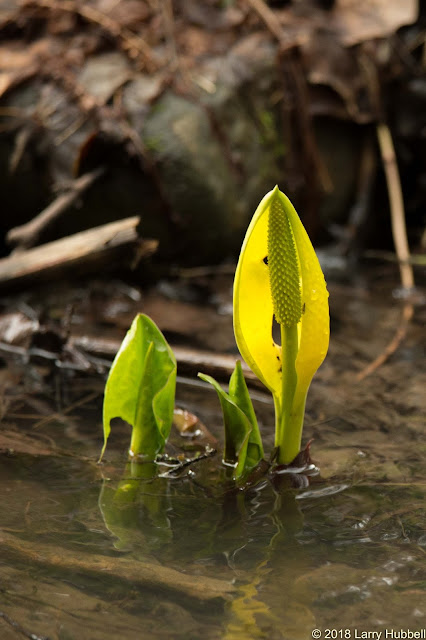 
Scroll down to see the answer!

Skunk Cabbage: Is a native plant, sometimes referred to as a Swamp Lantern. It is usually found in or very near water. Since it is flowering now, it is also an early sign of Spring. By April 1st it will be in full and fragrant bloom. At which point, you may find that you prefer to observe the large yellow blossoms from the upwind side.

Posted by Larry Hubbell at 1:15 PM