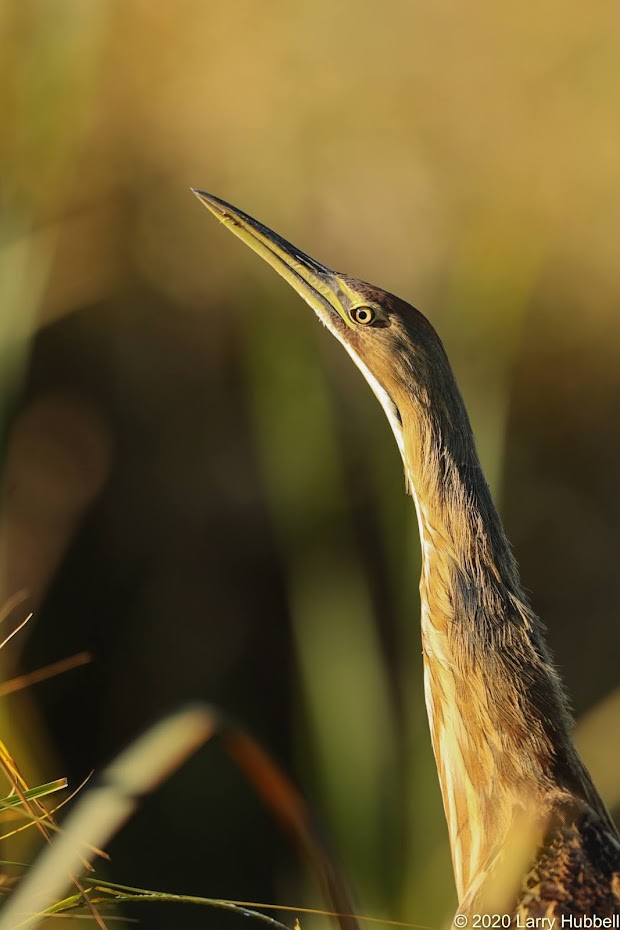 Last weekend was only the third time in nine years that I have seen an American Bittern on Union Bay. All three sightings have been along the shore and within a one hundred yard radius. Each of the bitterns walked in and out of the cattails while inspecting the shallow water along the shore for prey.
Curiously, I have been in my kayak each time I saw one of the Bitterns. Being close to their preferred habitat may have improved my odds of noticing them. On each occasion, I have watched them hunt. Sadly, during the two previous encounters, I did not see them catch anything. 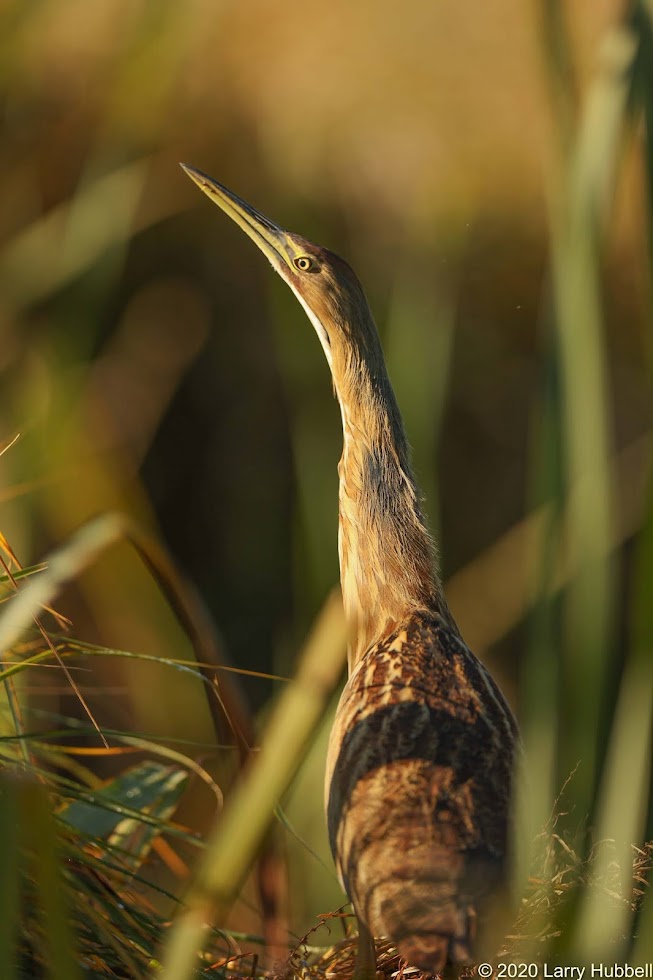 All three of the Bitterns were immature. Each bird lacked the black patch on the neck that would indicate maturity (Click Here to see an example). Since Bitterns are immature for only a small portion of their lives, I must have seen three different individuals. All three sightings were in the Fall. Most likely when they were each migrating towards Winter warmth.
This time, out of the corner of my eye, all I saw was a brief flash of movement. I had no clue what creature caused the motion. When I looked closer all I saw was the cattails slowly shaking to a stop.
According to the current range maps in "All About Birds" (and "Birds of the World") Bitterns apparently no longer nest west of the Cascades. In my previous Bittern post, I explained that 70 years ago Bitterns were known to nest on Union Bay. (Click Here to read the story.) They are currently shown as nesting in the northern half of the US and the southern half of Canada from the Cascades all the way east to the Atlantic Ocean.
They are widespread. However, they only nest in and around wetlands - areas which we, humans, tend to drain and develop. Like many other birds, their numbers are declining. But they are so good at hiding it is hard to notice their shrinking population.
The American Bitterns are so secretive that in Birds of the World, where they normally relate what a species natal down looks like, it simply says, "Undescribed." We still have a lot to learn about these incredibly specialized and secretive creatures. 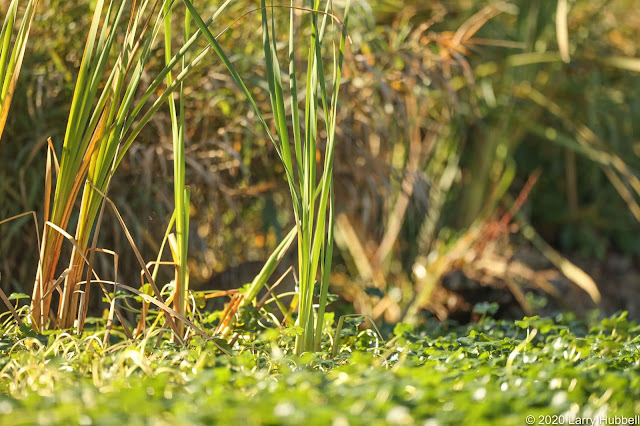 This photo focuses on the vegetation in the foreground, instead of the bird. I believe this is what our eyes tend to see when we are searching the shore for birds. Because I was in the kayak and using a telephoto lens this photo might even feel a bit closer to the bird than if we were using binoculars from a more distant location. 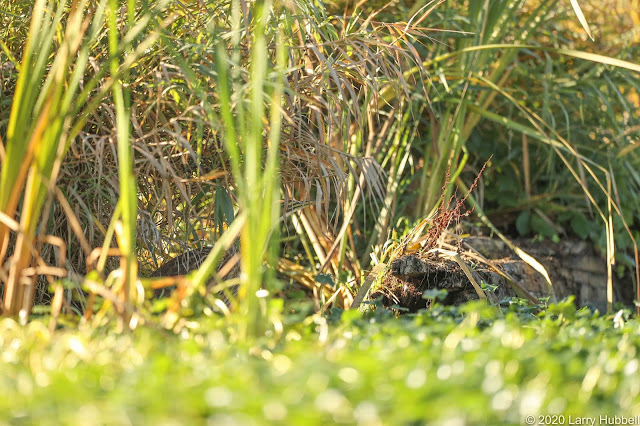 Now, the focus has shifted from the foliage to the Bittern. Don't be discouraged if you still cannot see it. Even immature Bitterns are masters of camouflage and concealment. 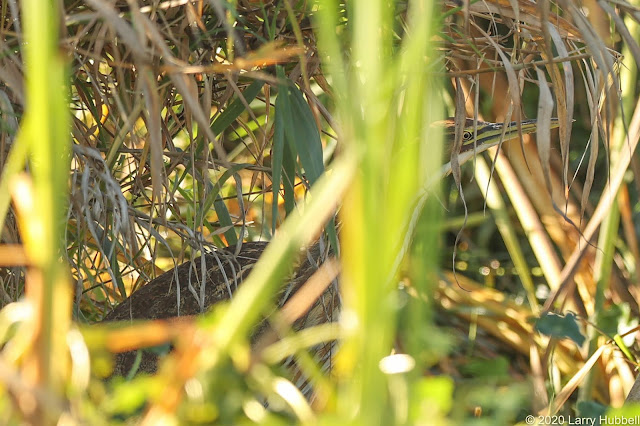 Finally, here is the same photo cropped and enlarged.  Even though the Bittern nearly fills the screen, it is not exactly easy to see. I suspect that we have American Bitterns passing through Union Bay every Autumn, often without being noticed at all. I wonder if some might even spend their winters here? 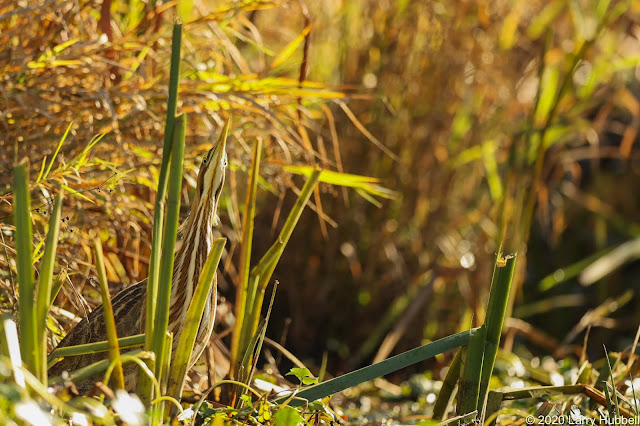 Skipping ahead, here is another classic American Bittern camouflage pose. In this case, the stripes on the long thin neck line-up with the vertical vegetation and help to hide the bird.
Notice how the Bittern holds its bill up out of the way and peers around its 'chin' or neck. 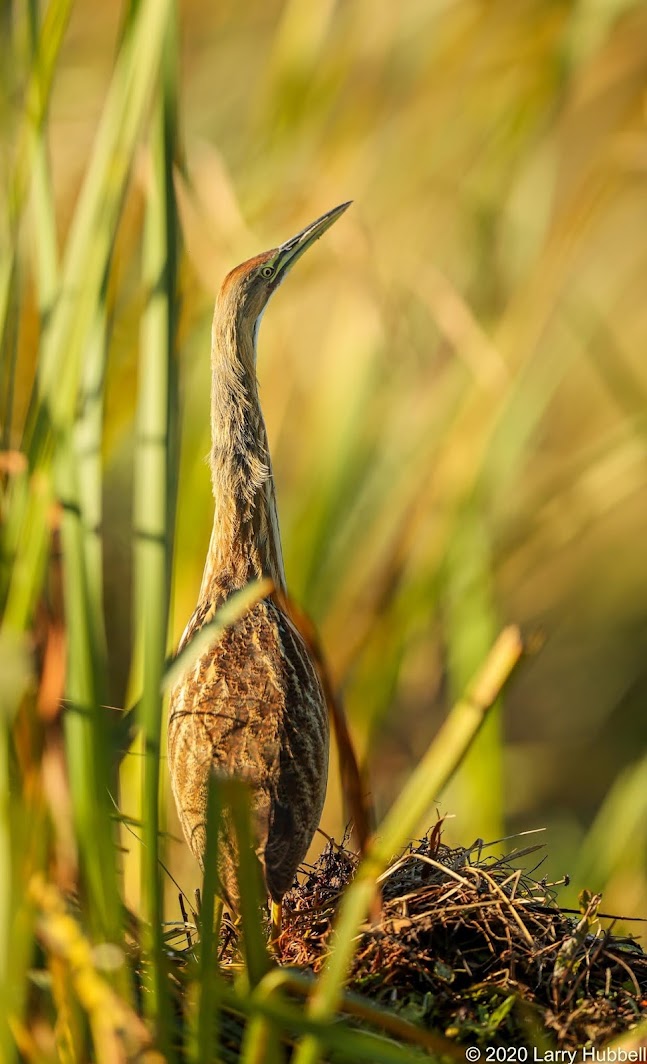 Luckily, there were moments when the Bittern stood tall and backlit by the brilliant sunlight. 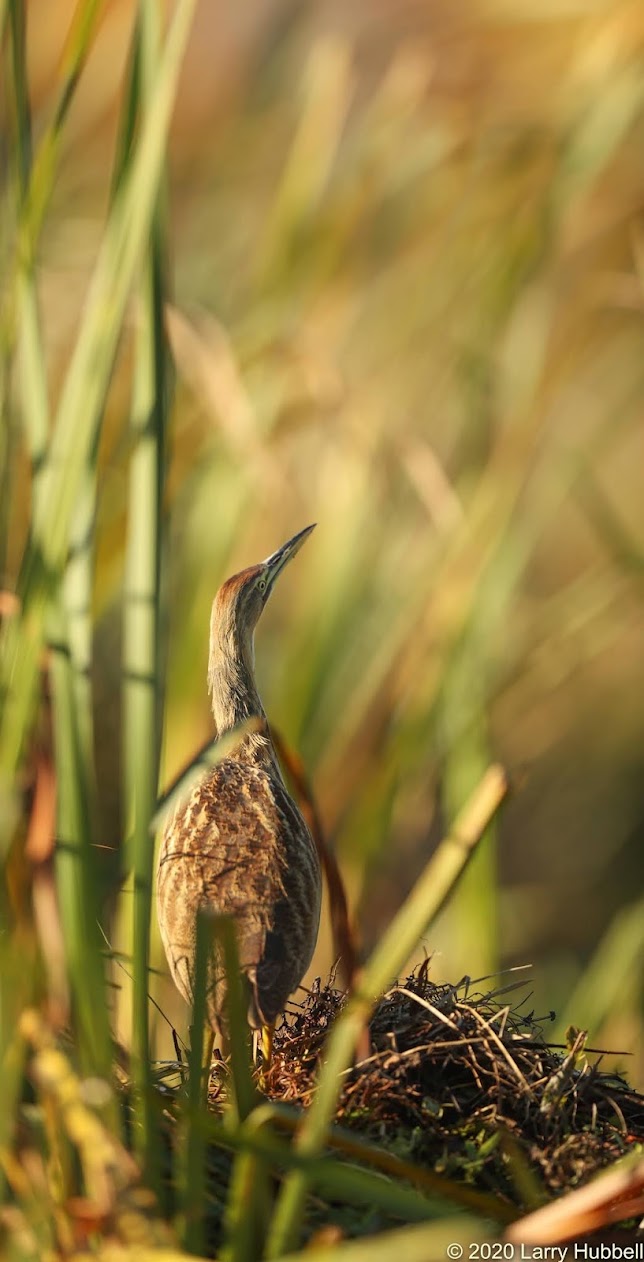 I am always amazed by how the neck can shrink. The Bittern is returning to the hunt. 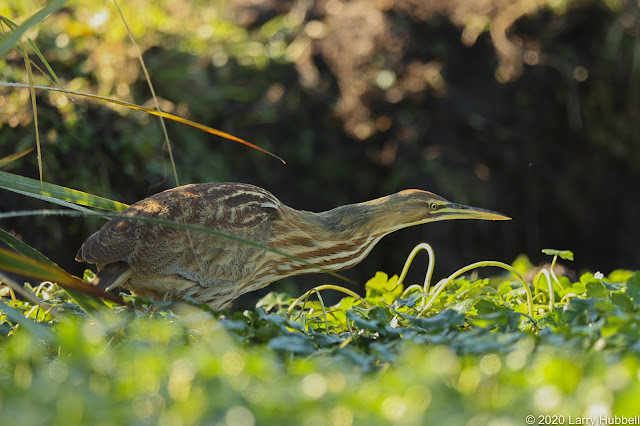 With a somber and stately stride, it proceeded along the dark bank of the shore. 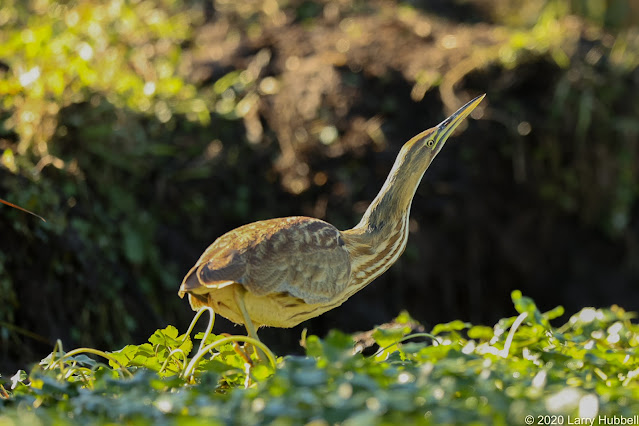 Momentarily, it raised its head. Once again it is peering around its 'chin'. Evidently, this odd position enlarges its field of vision - at least in the area where it is hunting 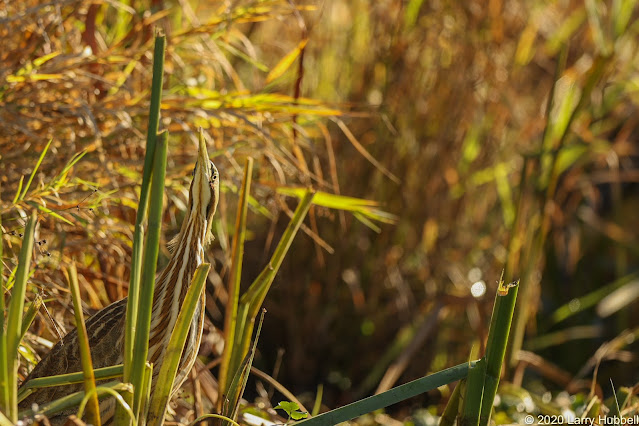 After the venture along the shore, the Bittern turned back towards the area it had previously hunted. 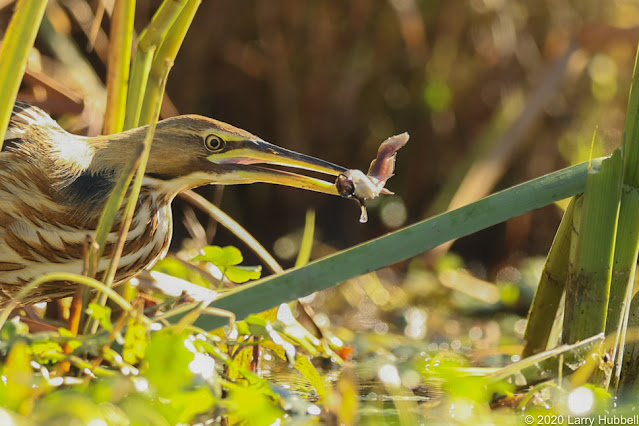 With a sudden extension of its neck, it snagged a pollywog i.e. a young bullfrog destined to never reach maturity. 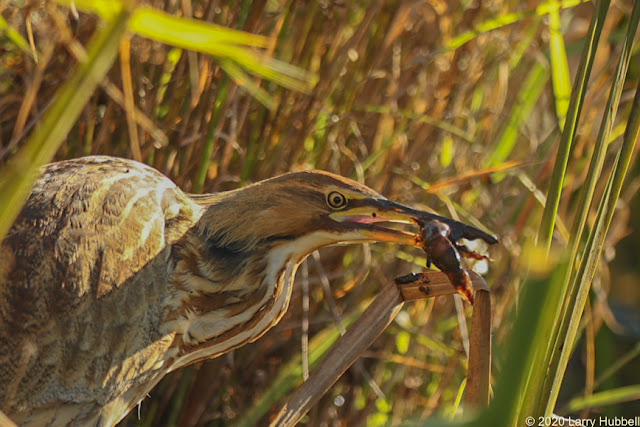 A little mashing and thrashing turned the tadpole into a mid-day meal. 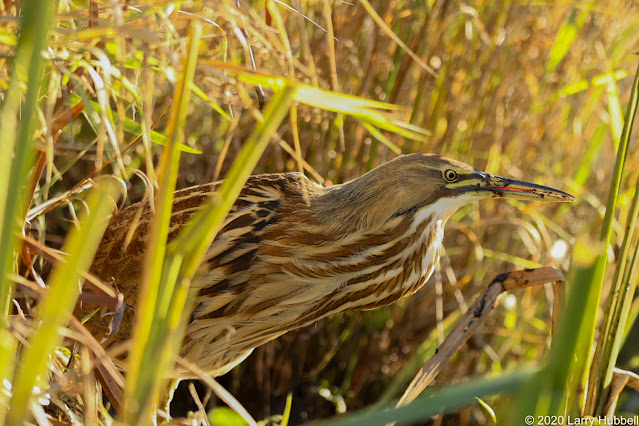 An American Bittern's long neck makes swallowing its prey a bit of a challenge. The food had a long way to go. I am a bit surprised that the bird did not extend its neck up into the air to get a little extra help from gravity. 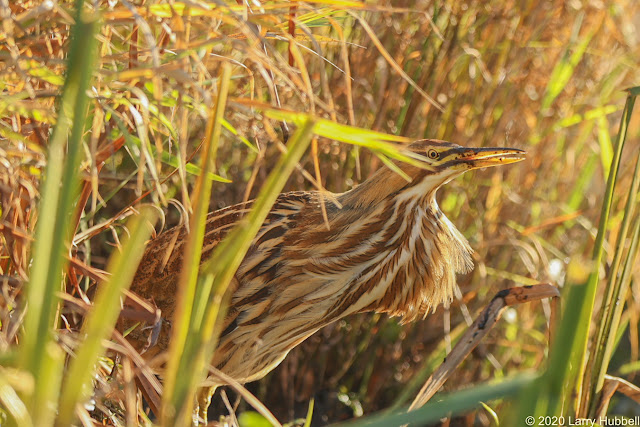 Unlike with humans, for a Bittern swallowing can be a multi-step process. 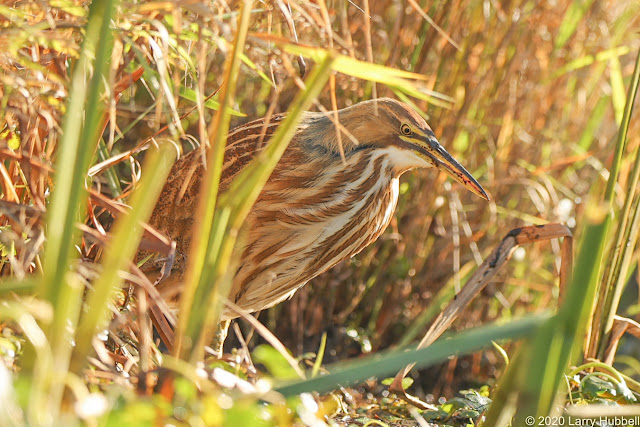 It took at least a half-a-dozen repeats of the swallowing effort to transport lunch from the upper end of the throat to its digestive destination. 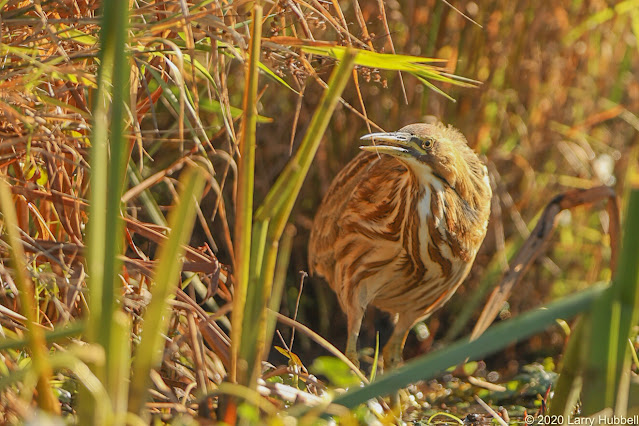 Afterward, the Bittern turned and headed back towards its original location. 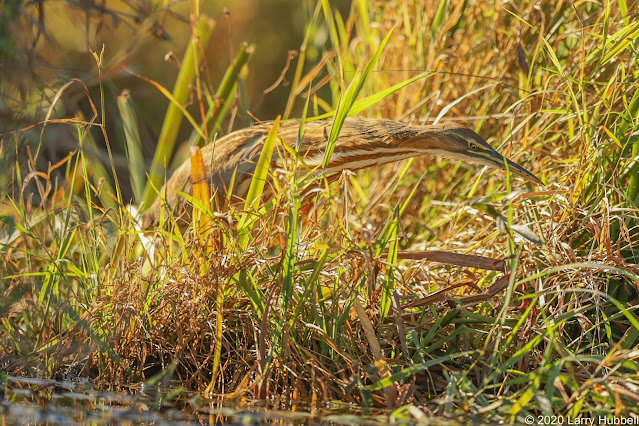 It stopped along the way. It was clearly enthralled with something. However, no matter how hard I tried, I could not see what it was looking at. 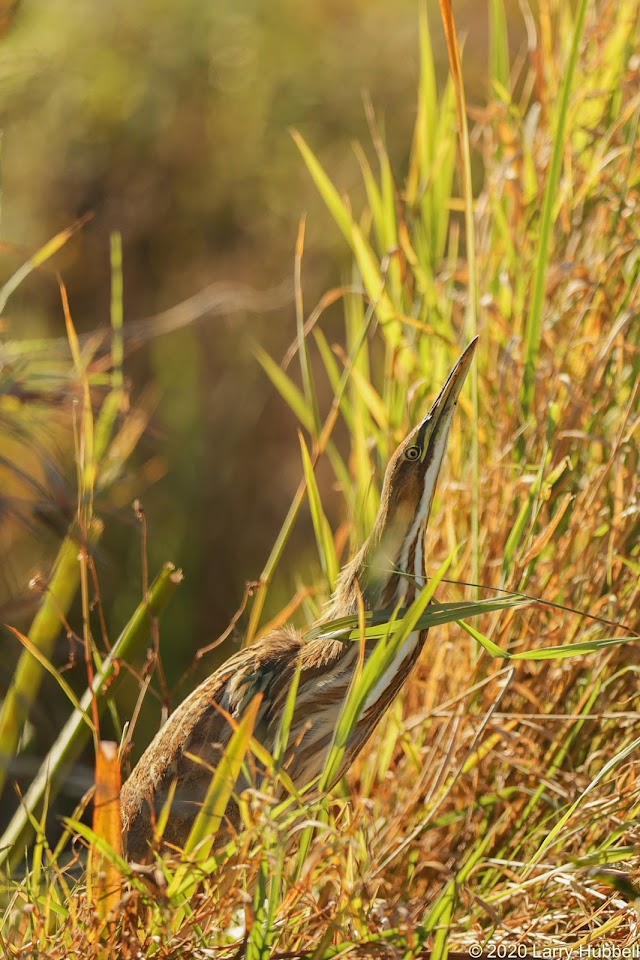 I suspect a small insect because of the way the Bittern slowly raised its head while maintaining its laser-like focus. 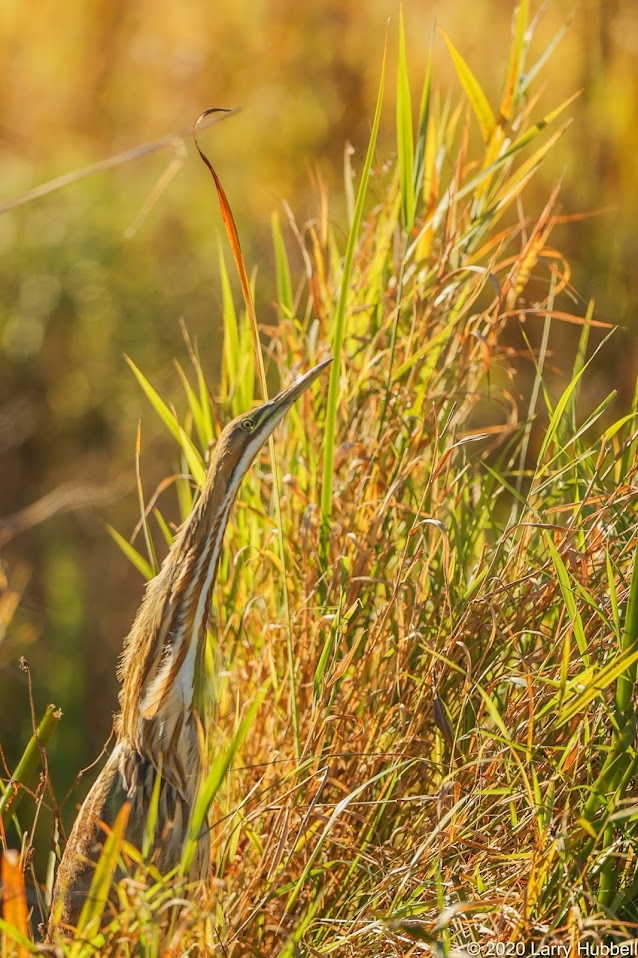 I never did spot the insect. However, watching the full extension of the Bittern's neck was a perfectly adequate reward for my efforts.
***************
This week's post is dedicated to Eric Kowalczyk. Eric was a kind and gentle neighbor with a fantastic knowledge of birds. His infectious love of everything avian was an absolute delight for those of us who were lucky enough to share a stroll along the shores of Portage Bay.
Thank you to Marianne and John for sharing and suggesting the following information be included here. 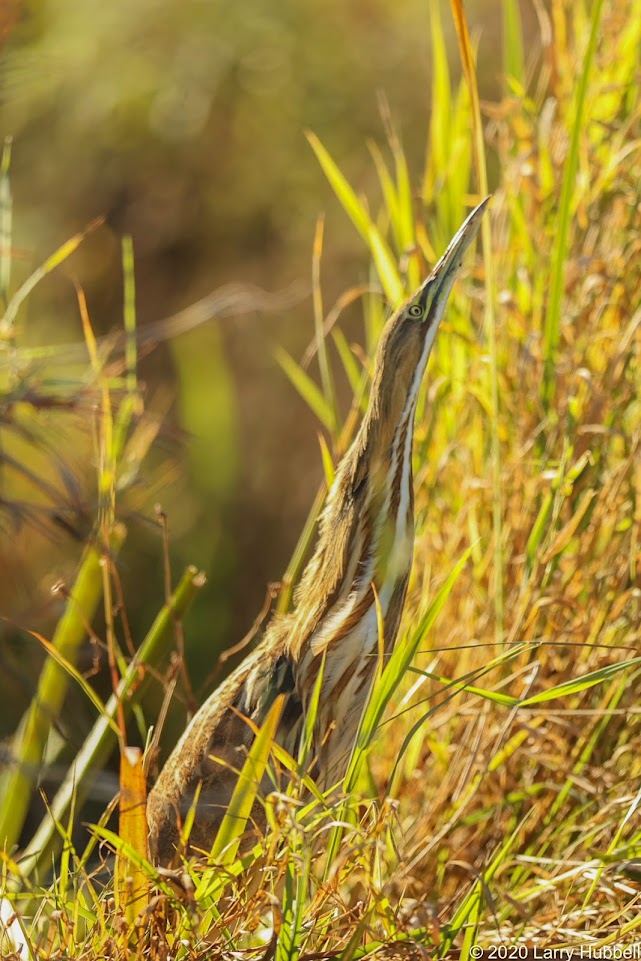 Have a great day on Union Bay...where nature lives in the city and Black Birders are welcome!
Larry
Recommended Citation
Lowther, P. E., A. F. Poole, J. P. Gibbs, S. M. Melvin, and F. A. Reid (2020). American Bittern(Botaurus lentiginosus), version 1.0. In Birds of the World (A. F. Poole, Editor). Cornell Lab of Ornithology, Ithaca, NY, USA. https://doi.org/10.2173/bow.amebit.01
Going Native:
Without a well-funded Environmental Protection Agency, it falls to each of us to be ever more vigilant in protecting our local environments. Native plants and trees encourage the largest diversity of lifeforms because of their long intertwined history with our local environment and native creatures. I have been told that even the microbes in the soil are native to each local landscape. I hope we can inspire ourselves, our neighbors, and local businesses to respect native flora and to support native wildlife at every opportunity. I have learned that our most logical approach to native trees and plants (in order of priority) should be to:
1) Learn and leave established native flora undisturbed.
2) Remove invasive species and then wait to see if native plants begin to grow without assistance. (If natives plants start on their own, then these plants or trees are likely the most appropriate flora for the habitat.)
3) Scatter seeds from nearby native plants in a similar habitat.
4) If you feel you must add a new plant then select a native plant while considering how the plant fits with the specific habitat and understanding the plant's logical place in the normal succession of native plants.
My intention in my weekly post is to include at least one photo each week and visually challenge us to know the difference between native and non-native lifeforms. 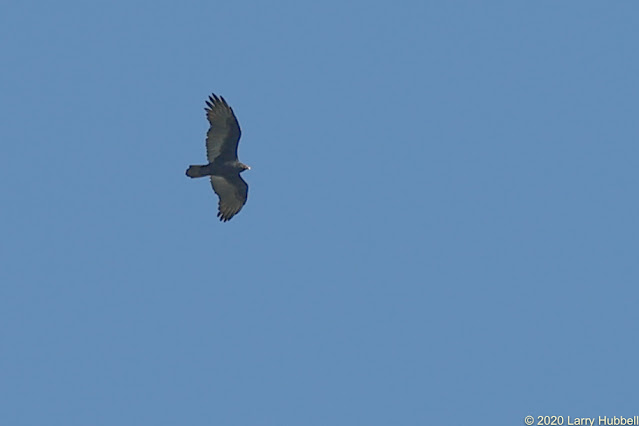 What species is this? Is it native to the PNW?
The pattern of light and dark on the wings, the small head, and the reflective bill are all helpful in identifying this bird.

Scroll down for the answer.
***************
Turkey Vulture: Yes. It is native to our area. However, they do not spend their winters here. This one was seen high over the Arboretum in early October - heading south. Some even migrate as far as South America.
***************
The Email Challenge:
Over the years I have had many readers tell me that Google is no longer sending them email announcements regarding my posts. Even more frustrating when they go to 're-sign-up', hoping that will enable them to once again start receiving the announcements, they get a message which says 'Sorry, you are already signed up.' Google has not responded to my requests for help with this issue.
My functional workaround is to set up my own email list and each week I manually send out a new post announcement. If you are experiencing the issue and would like to be added to my personal email list please send me an email requesting to be added. Thank you for your patience!
My email address is: LDHubbell@Comcast.Net
One more photo for the persistent. 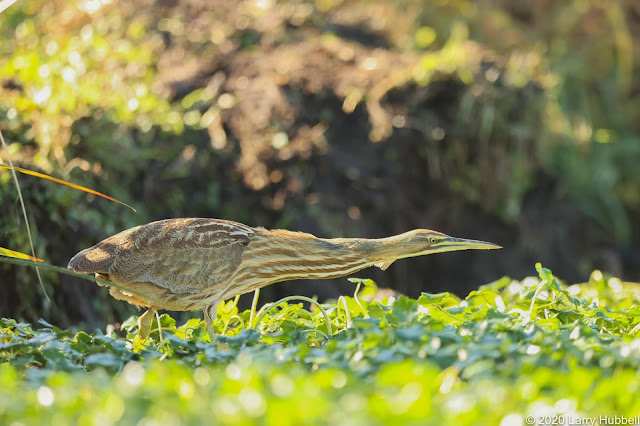 Posted by Larry Hubbell at 2:07 PM