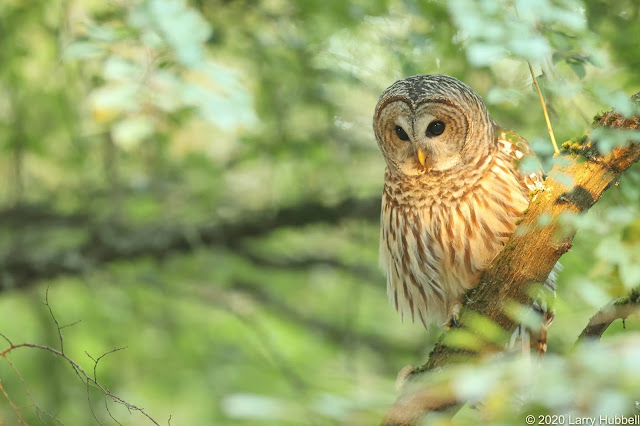 Toward the end of September, I decided to take an early morning walk to Foster Island. I must have I walked right under this owl without even noticing it. I was nearly a hundred yards away when Ginger, my daughter's dog, pulled at the leash.
Ginger is generally quite aware of any canine competition. I looked back fully expecting to see a well-rested dog dragging another bleary-eyed soul toward the morning light. The sun was struggling to assume its full responsibilities. However, the trail was empty of humans and dogs
The shadowy shape on the ground looked duck-sized and given the proximity to the shore waterfowl seemed like a reasonable assumption. When the shapeshifted, my assumption shattered. 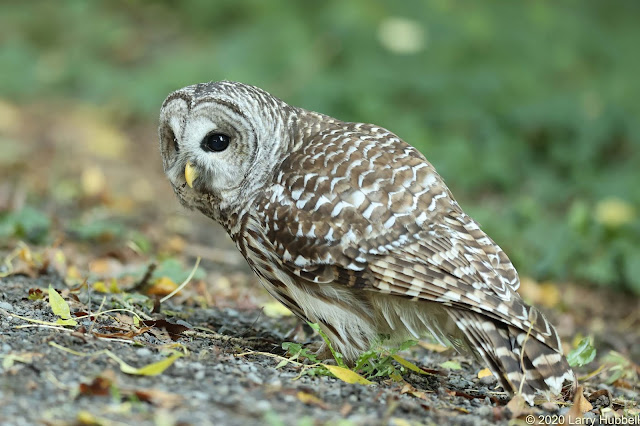 It was a Barred Owl on the ground. In the past, I have only seen Adult owls on the ground when securing food or water. Looking through my camera lens helped me to investigate the situation from a respectful distance. I was surprised by the apparent absence of any prey. 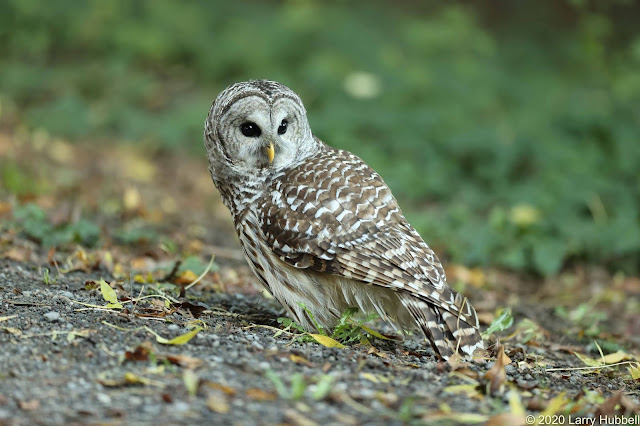 The owl was alert. It was carefully watching for any nearby movement. Its intensity implied that the previous night's hunting was not fully successful. 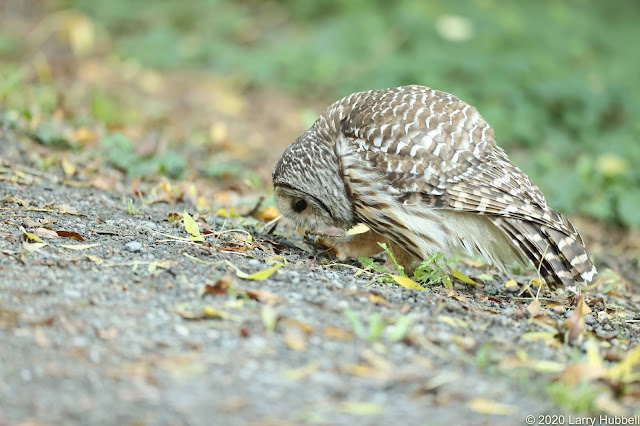 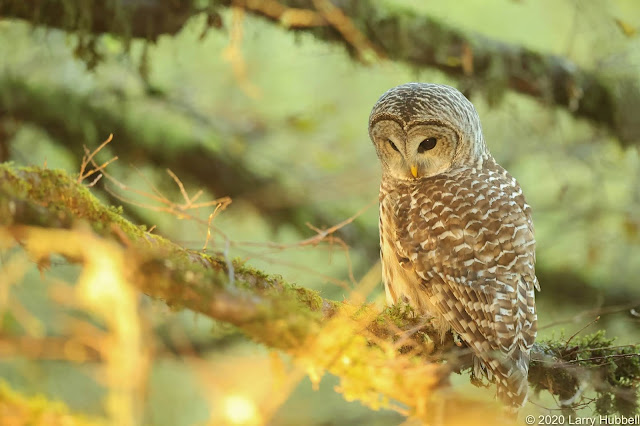 As the sun fought through the cottonwoods a shaft of light lit up the foliage below the owl. 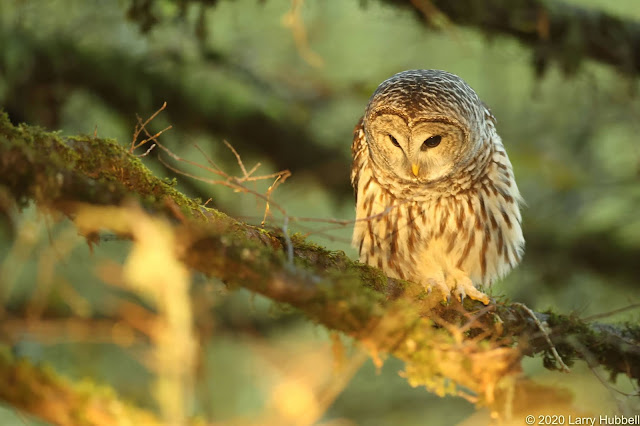 The owl remained intently focused. It reminded me of a person staring into a campfire. 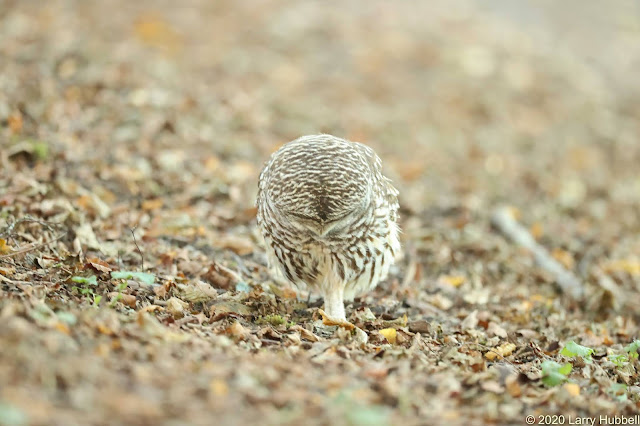 Again, the owl returned to the shaded ground. Its colors were a surprisingly similar match to the leaf litter, gravel, and twigs. 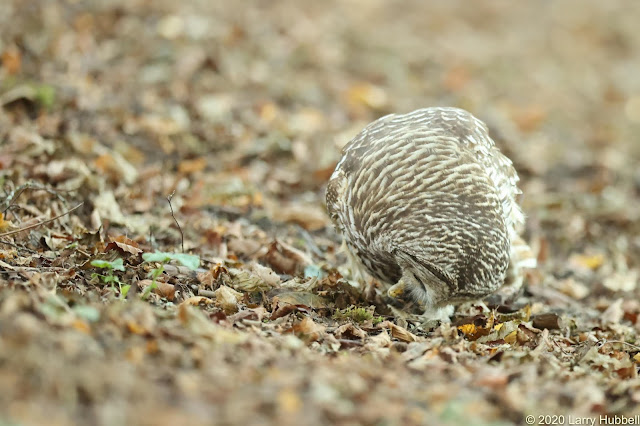 After the owl left, I inspected the spots where it landed. There was no obvious sign of food. 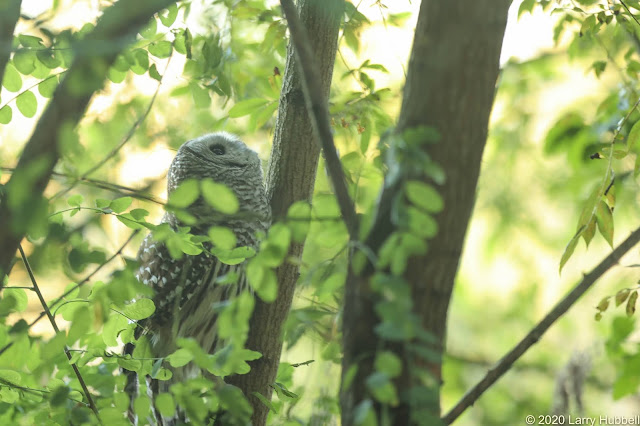 When an Eastern Gray Squirrel worked its way through willows along the shore, the owl gave chase, apparently, still hungry. The squirrel was much too quick, especially given the owl's obvious, daylit approach. Ultimately, the owl gave up and disappeared into denser vegetation. Its early morning hunger reinforced the idea that it was a young, inexperienced hunter. 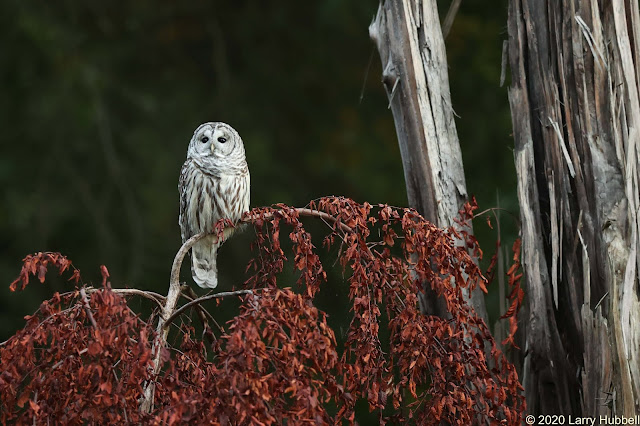 A couple of weeks later, near the end of an October day, I found a solitary owl watching a field of grass just south of Foster Island Road. I cannot prove it is the same owl but the location and behavior make it seem likely. Barred Owls are territorial and they do not generally migrate. So the odds of seeing the same owl, or at least the same pair, in the same area are pretty good. 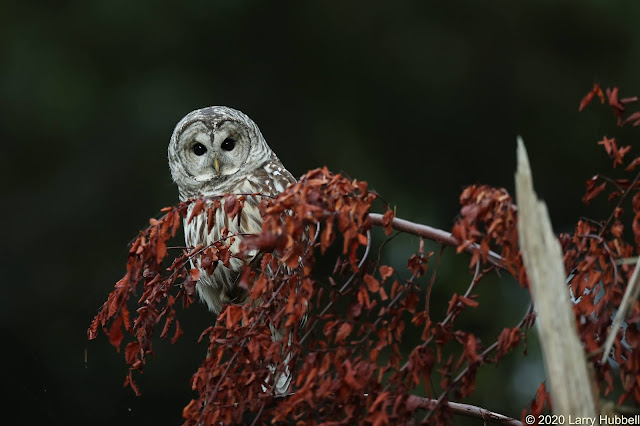 Ginger and I stood silent and still at the far edge of the grass for at least a half-hour. The owl noticed us once. 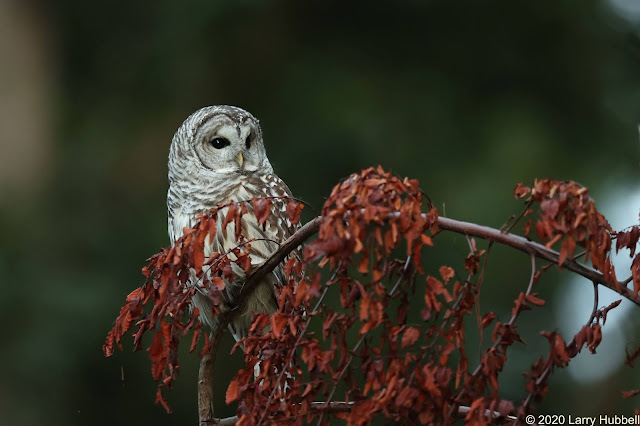 It quickly resumed searching the grass and the trees for something tasty to eat. 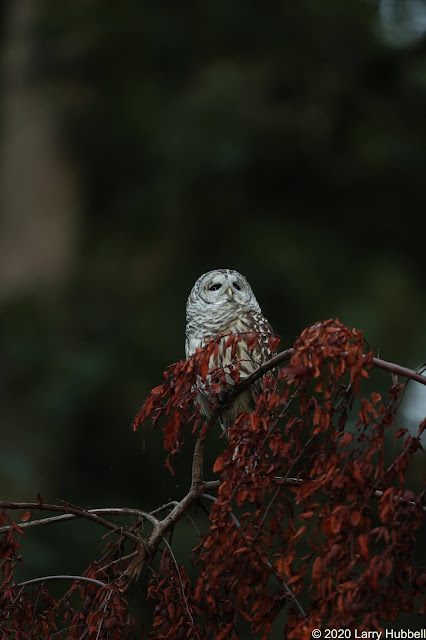 Searching the trees overhead seems like a poor hunting strategy. (On the other hand, when sitting out in the open it may be a very good defensive strategy. I have seen Bald Eagles and Ravens stalking or chasing Barred Owls and we have both in the area. Plus, Great Horned Owls reportedly eat them as well.)
Adult Barred Owls tend to stay undercover and to focus on what is below them. They often sit near the water's edge as darkness falls. They wait patiently for a small creature to reveal itself. Then, when the prey looks the other way the owl spreads its wings and silently descends. If this owl spotted viable prey overhead in the trees the odds of success would quickly diminish while the owl attempted to gain the necessary elevation. The smaller creature would be likely to notice its approach and easily scamper away to safety. 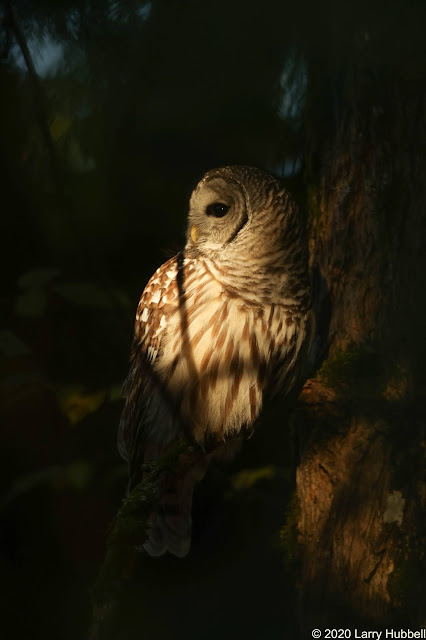 This week, I have seen and heard the owl twice more. Each time toward the end of the day. I am assuming it is the same bird in part because I have yet to hear an answering call. I suspect it is trying to stake out its first territory and hoping to attract a viable mate. 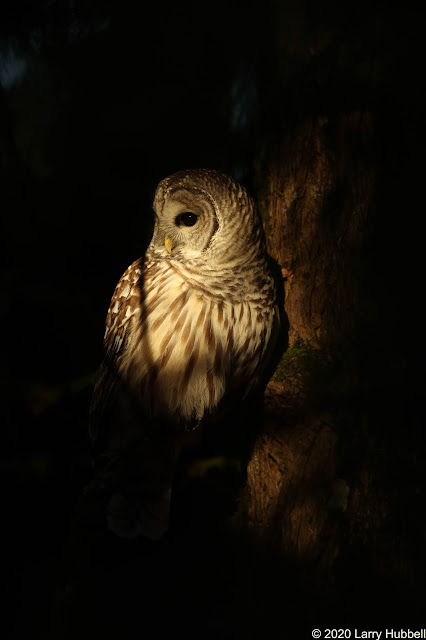 The first evening, when I heard it call it was doing the complete Barred Owl statement, e.g. "Who cooks for you?, Who cooks for you?" Sadly, for the owl, the only answer I heard was from a young girl out for a walk with her parents. 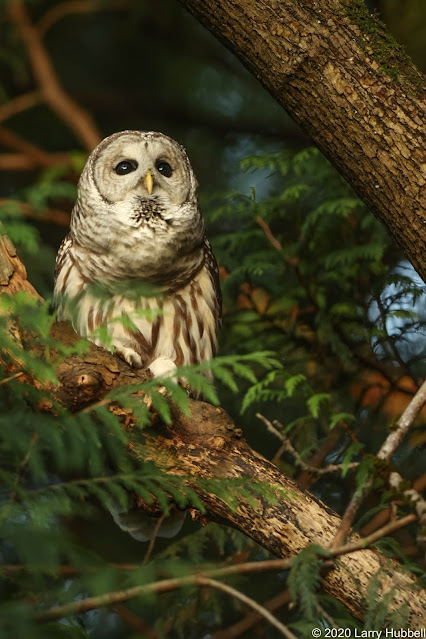 The next evening the calls I heard were much shorter. I do not know why? However, I still did not hear a reply.
If you happen to walk through the north end of the Arboretum, especially toward the end of the day, please listen for the call of the Barred Owl. In particular, listen for a reply. It will be curious to see who is the first to hear two owls calling from different directions in the north end of the Arboretum.
I believe this photo was taken just as the owl called out. Its mouth is apparently open, Curiously, even though there is a dark patch in the feathers they still hide the mouth from view. It is a bit harder to see in the video below but it still seems like the open mouth remains hidden whenever the owl calls out. This is a new observation for me.
I hope this owl refines its hunting technique before winter arrives and food gets even harder to find. If it succeeds then by spring it may even attract a mate. Currently, it reminds me of the title to an old Beatles' song, "Sgt. Pepper and the Lonely Hearts Club."
Have a great day on Union Bay...where nature lives in the city and Black Birders are welcome!
Larry
Going Native:
Without a well-funded Environmental Protection Agency, it falls to each of us to be ever more vigilant in protecting our local environments. Native plants and trees encourage the largest diversity of lifeforms because of their long intertwined history with our local environment and native creatures. I have been told that even the microbes in the soil are native to each local landscape. I hope we can inspire ourselves, our neighbors, and local businesses to respect native flora and to support native wildlife at every opportunity. I have learned that our most logical approach to native trees and plants (in order of priority) should be to:
1) Learn and leave established native flora undisturbed.
2) Remove invasive species and then wait to see if native plants begin to grow without assistance. (If natives plants start on their own, then these plants or trees are likely the most appropriate flora for the habitat.)
3) Scatter seeds from nearby native plants in a similar habitat.
4) If you feel you must add a new plant then select a native plant while considering how the plant fits with the specific habitat and understanding the plant's logical place in the normal succession of native plants.
My intention in my weekly post is to include at least one photo each week and visually challenge us to know the difference between native and non-native lifeforms. 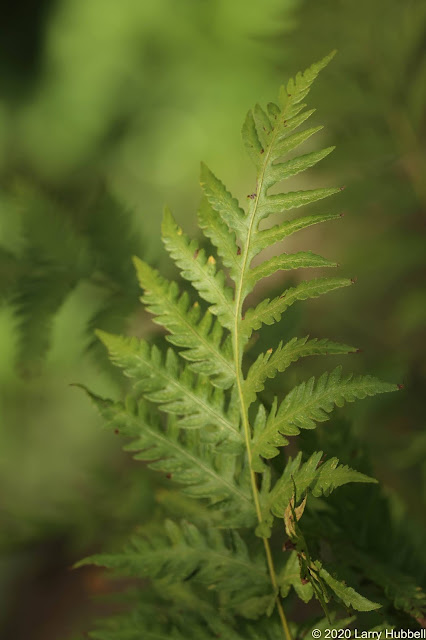 What species of fern is this? Is it native to the PNW? 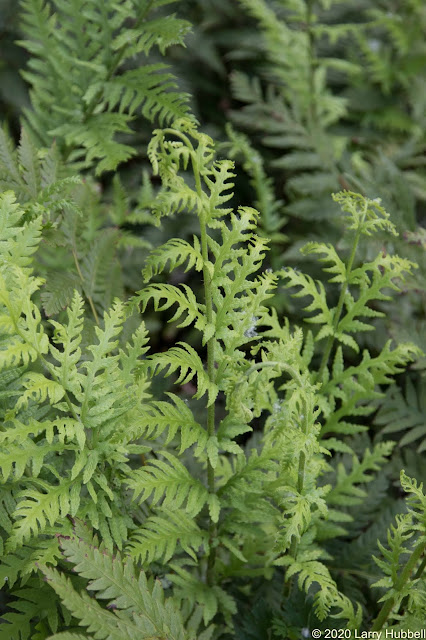 Here is a second more distant view - in case it helps. These ferns can be seen in the Arboretum along the Loop Trail.

Scroll down for the answer.
***************
Giant Chain Fern: It is a native West Coast fern. According to the University of Washington, it is listed as a sensitive plant on the endangered species list. I suggest learning what it looks like just in case you have one growing in your yard. You might want to protect it. Click on the name to visit the UW fact sheet.
Thank you to Andy Mitton from the Berger Partnership for teaching me about this plant.
***************
The Email Challenge:
Over the years I have had many readers tell me that Google is no longer sending them email announcements regarding my posts. Even more frustrating when they go to 're-sign-up', hoping that will enable them to once again start receiving the announcements, they get a message which says 'Sorry, you are already signed up.' Google has not responded to my requests for help with this issue.
My functional workaround is to set up my own email list and each week I manually send out a new post announcement. If you are experiencing the issue and would like to be added to my personal email list please send me an email requesting to be added. Thank you for your patience!
My email address is: LDHubbell@Comcast.Net
One more photo for the persistent. 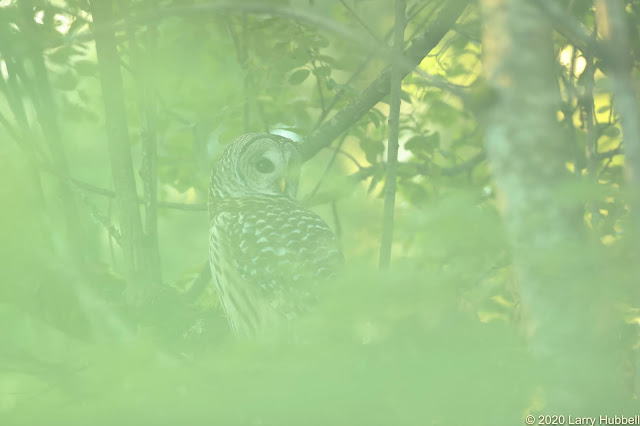 As the owl moved deeper into the foliage it became progressively more difficult to see.