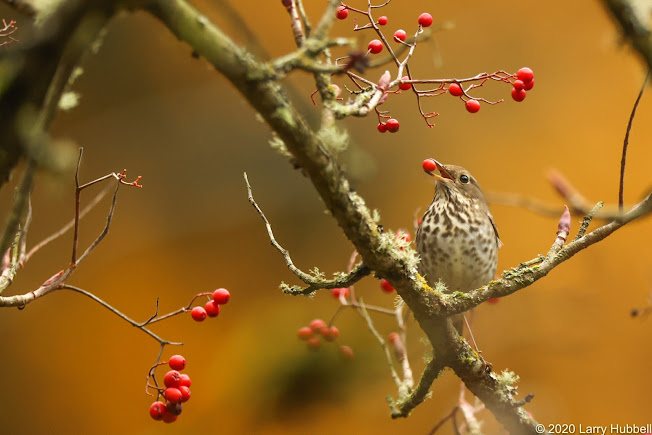 A Hermit Thrush belongs to the same family as an American Robin. In the fall and winter, similar to a robin, they can act a lot like a frugivore. 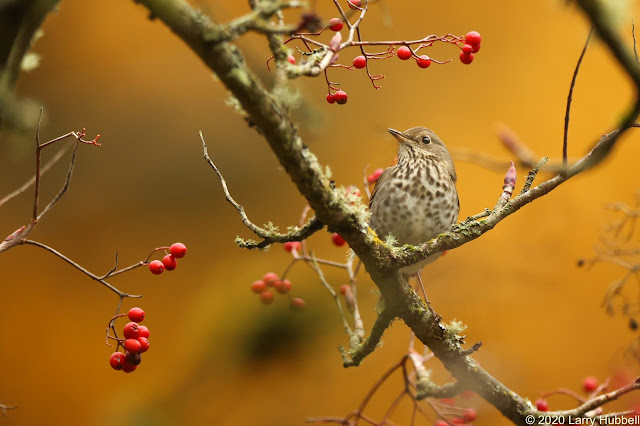 If you adjust for size and compare the silhouette of a Hermit Thrush and an American Robin I suspect they would look quite similar. They are both members of the Turdidae or Thrush family. However, there are dramatic differences in plumage, size, and song.
Sadly, this week, I did not get to hear the haunting song of a Hermit Thrush. (Clicking Here will enable you to hear a recording though.) Luckily, I did hear their soft "chuff" call, which is virtually identical to a call made by Varied Thrush. 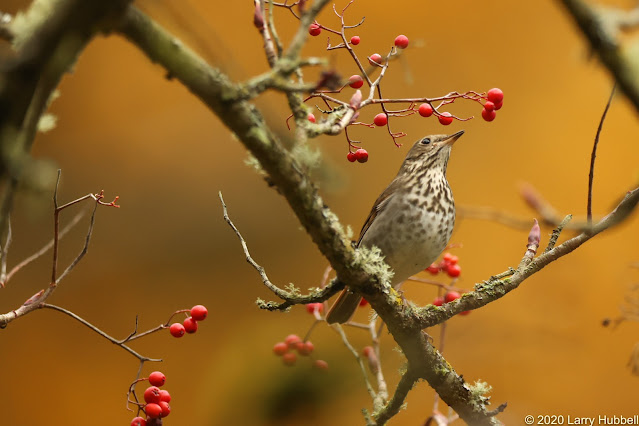 A Hermit Thrush weighs less than half as much as a Robin. To my eye, it appears even smaller. 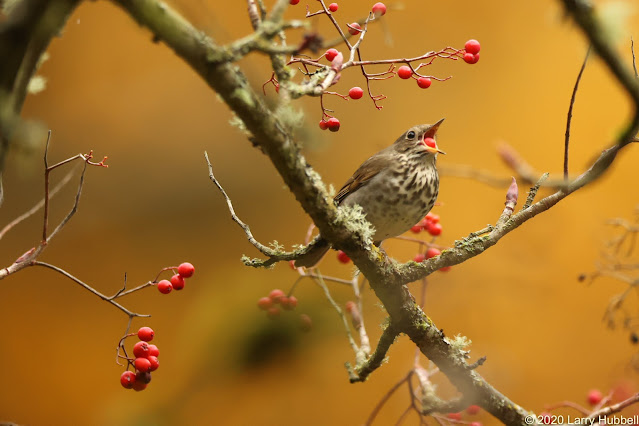 I remember seeing one a few years ago crushing a Sorbus berry it found on the ground. It took some time to reduce the fruit to a manageable size. American Robins (and Varied Thrush) have no problem with the size of a 'normal' Sorbus berry.
This year, I was lucky to find a flock of Hermit Thrush, in the Arboretum, focused on an apparently unique, Asian Sorbus. This particular tree seems to have smaller than average berries, which allow the Hermit Thrush to swallow them whole. 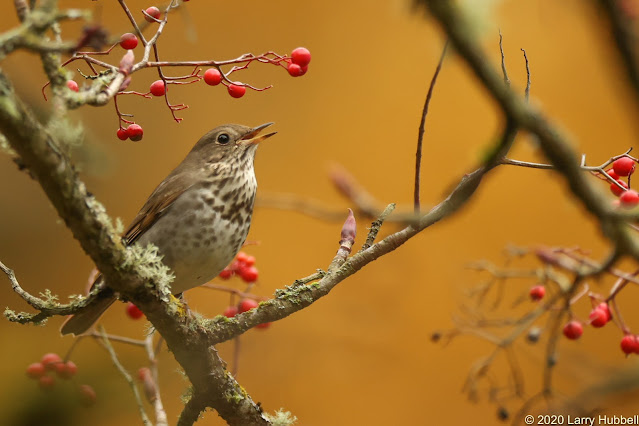 This is also the first time I remember noticing that the swallowed berry causes a temporary protrusion in the lower throat on its way south. 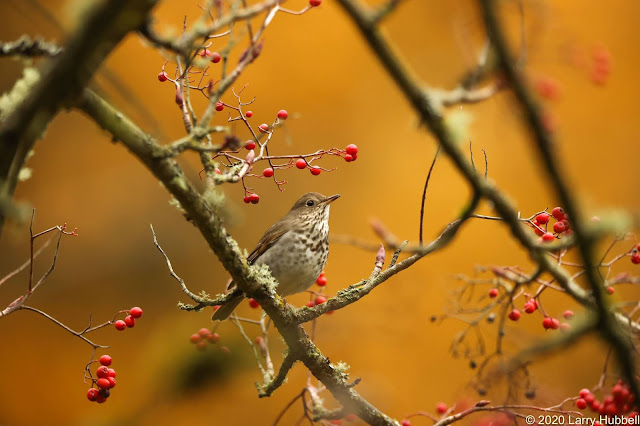 Sometimes, the Hermit Thrush will sit for a moment while the berry descends into its digestive tract. 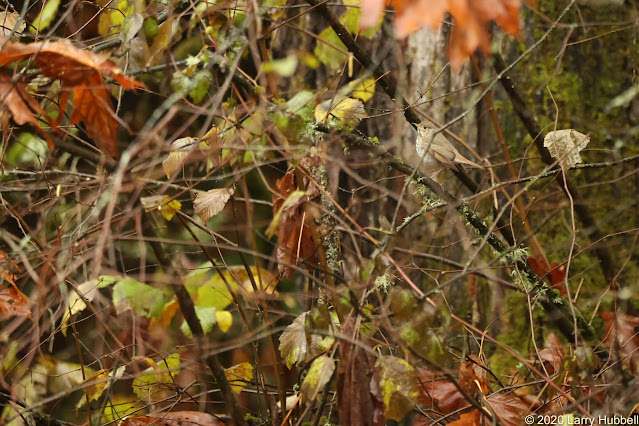 At other times, similar to a Robin, after initially swallowing two or three berries it will abandon the fruit tree. They seldom go far. Generally, they sit somewhere nearby while waiting for the urge to consume more fruit.
An American Robin will often choose an elevated perch in a tree. A Hermit Thrush, on the other hand, is more likely to pick a lower spot in a bush, beneath a small tree, or in the undergrowth. 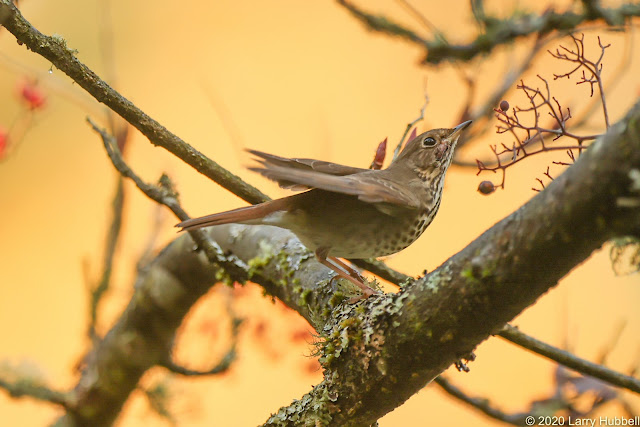 Even when sitting, a Hermit Thrush is seldom still. They will often raise their reddish tail and flick their wings. I wonder if this behavior scares insects into moving or silently signals their companions.
To me, Hermit Thrush appear to be nervous birds. Their behavior looks like I feel when I drink too much coffee. Maybe, they are internally calm - but I doubt it. 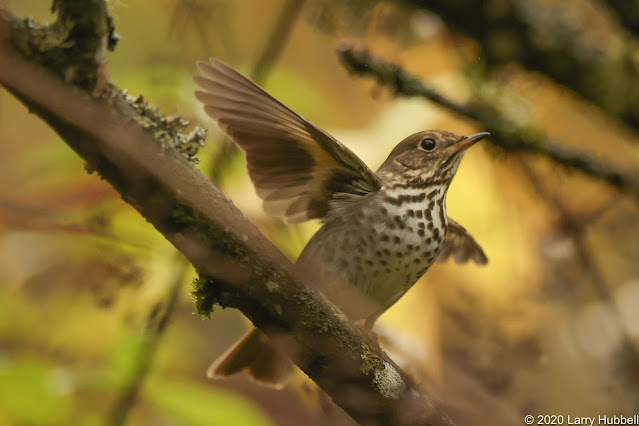 Even though we have other spotted Thrush species that breed in Washington state this is the only one that winters here. Lucky, for us.
There are three other small, similar-looking, spotted Thrush species that breed in Western North America e.g. the Veery, the Swainson's Thrush, and the Gray-cheeked Thrush.  The latter is not normally found in Washington state.
Note: There are five other Thrush species in Washington state which are quite distinctively different e.g. without spots in their adult plumage.
Amazingly, Birds of the World (BOW) says that we have 12 subspecies of Hermit Thrush in North America.  However, BOW does not have a map laying out the ranges for all the subspecies. (It makes me wonder if mapping their ranges might be an interesting task for a budding ornithologist.) Locally, Birdweb says we may have four Hermit Thrush subspecies in Washington state.
Personally, I find this incredible complexity of life keeps me humble while I work to expand my knowledge and understanding. 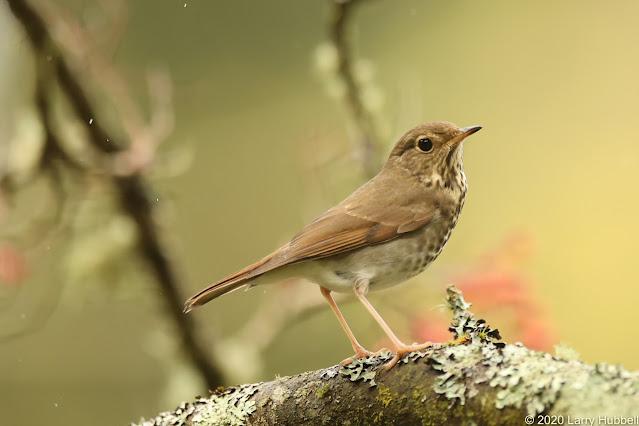 An interesting, bite-sized, piece of information is learning how to tell a first-year Hermit Thrush from one that is more mature. The tiny buff-colored line across the upper wing, e.g. the tiny pale coloring at the end of the upper coverts, indicates this is a Hermit Thrush who hatched out this year. 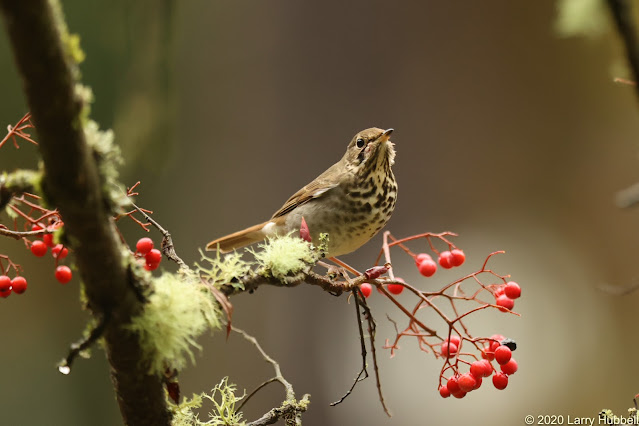 This week, as the fruit on the Sorbus tree, disappeared the corresponding number of Hermit Thrush seemed to also decline. 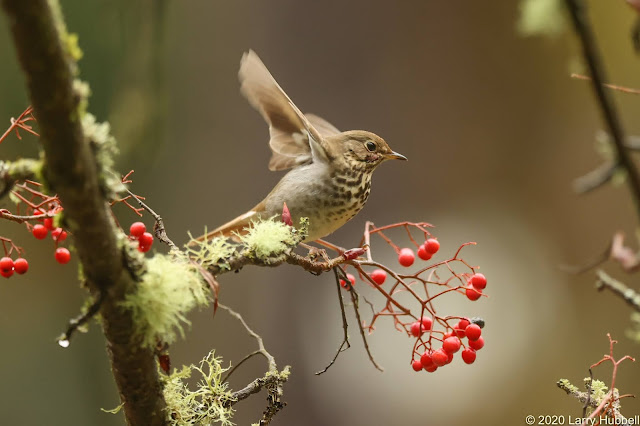 As mentioned above, I have generally assumed the flicking of a bird's wings was to frighten insects. (Inspiring a bug to move makes it easier for a bird to see them.) However, waving your wings above fruit does not make the berries any more obvious, although, I guess the downdraft might make them move. 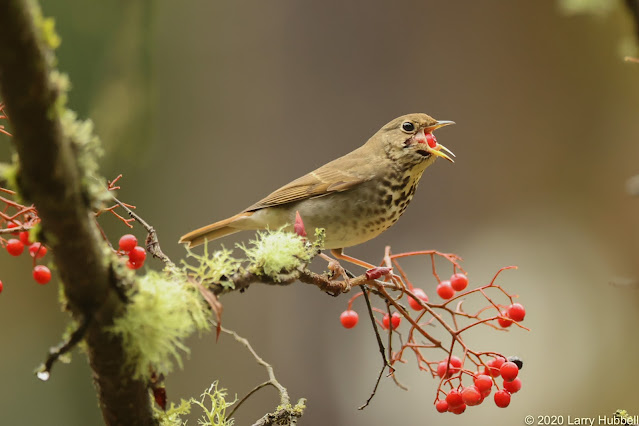 Notice how the 'fish' hook on the back of the tongue helps to push the fruit down the throat. We might argue whether it is pushing or pulling. However, the tongue runs underneath the berry enabling the hook to apply pressure from the far side.

By the way, the reddish-brown tail, contrasting with the grayish-brown back, is unique to the Hermit Thrush species. 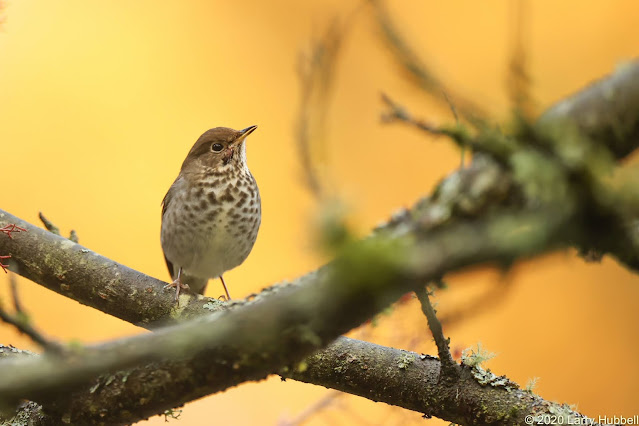 When they stop and look around before snatching the next piece, I wonder if they are watching for danger? 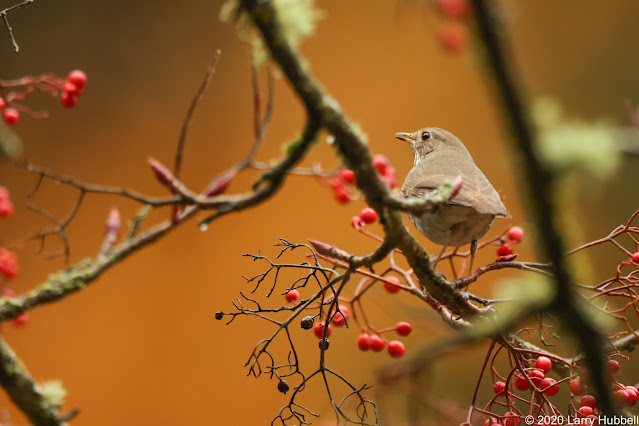 Maybe, they are just trying to understand that odd clicking noise - coming from my camera. 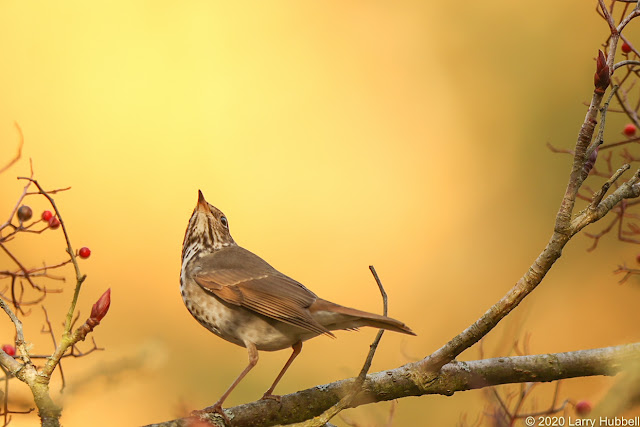 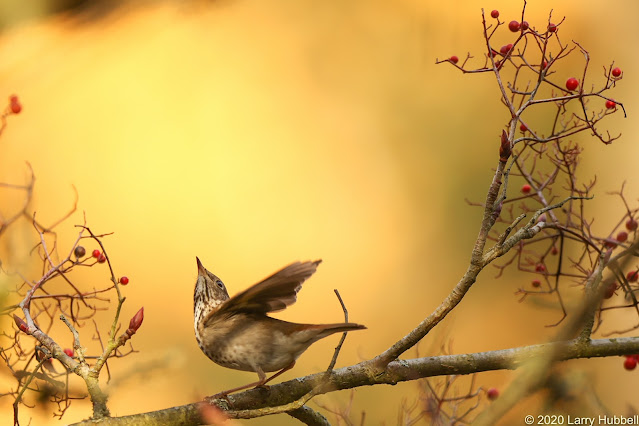 ...they are totally focused on the fruit.
Have a great day on Union Bay...where nature lives in the city and Black Birders are welcome!

PS: The Washington Thrush without the white central line under the wing is an American Robin.

Dellinger, R., P. B. Wood, P. W. Jones, and T. M. Donovan (2020). Hermit Thrush (Catharus guttatus), version 1.0. In Birds of the World (A. F. Poole, Editor). Cornell Lab of Ornithology, Ithaca, NY, USA. https://doi.org/10.2173/bow.herthr.01
Going Native:
Without a well-funded Environmental Protection Agency, it falls to each of us to be ever more vigilant in protecting our local environments. Native plants and trees encourage the largest diversity of lifeforms because of their long intertwined history with our local environment and native creatures. I have been told that even the microbes in the soil are native to each local landscape. I hope we can inspire ourselves, our neighbors, and local businesses to respect native flora and to support native wildlife at every opportunity. I have learned that our most logical approach to native trees and plants (in order of priority) should be to:
1) Learn and leave established native flora undisturbed.
2) Remove invasive species and then wait to see if native plants begin to grow without assistance. (If natives plants start on their own, then these plants or trees are likely the most appropriate flora for the habitat.)
3) Scatter seeds from nearby native plants in a similar habitat.
4) If you feel you must add a new plant then select a native plant while considering how the plant fits with the specific habitat and understanding the plant's logical place in the normal succession of native plants.
My intention in my weekly post is to include at least one photo each week and visually challenge us to know the difference between native and non-native lifeforms. 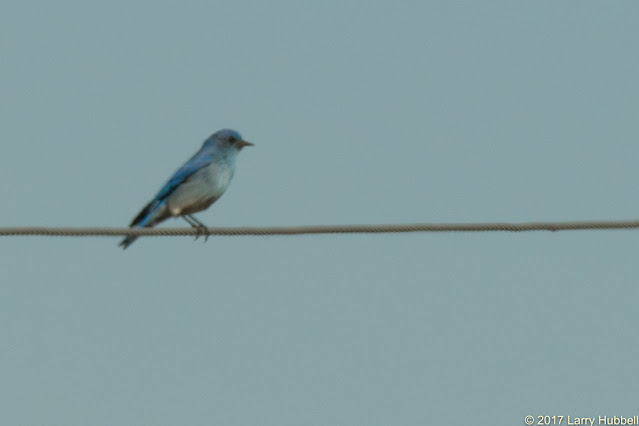 Scroll down for the answer.
***************
Mountain Bluebird: This beautiful thrush is native to Mt. Rainer, Mt. St. Helen's, and various locations east of the Cascades, but sadly not Union Bay.
The eight species of Thrush that can normally be found in Washington State, at some point during each year, are the:
* These three have spotted breasts in adult plumage.
Although, I have not seen them all myself, I understand that the juveniles of the other five species may also have spotted breasts.
***************
The Email Challenge:
Over the years I have had many readers tell me that Google is no longer sending them email announcements regarding my posts. Even more frustrating when they go to 're-sign-up', hoping that will enable them to once again start receiving the announcements, they get a message which says 'Sorry, you are already signed up.' Google has not responded to my requests for help with this issue.
My functional workaround is to set up my own email list and each week I manually send out a new post announcement. If you are experiencing the issue and would like to be added to my personal email list please send me an email requesting to be added. Thank you for your patience!
My email address is: LDHubbell@Comcast.Net
One more photo for the persistent: 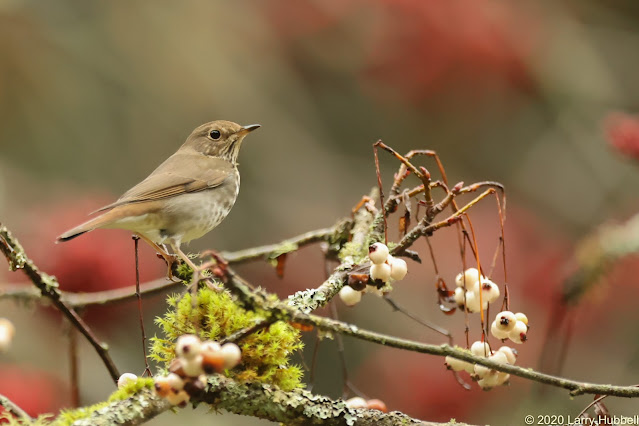 This is a non-native, white-berried variation of Sorbus that can also be found in the Arboretum.
Posted by Larry Hubbell at 1:59 PM