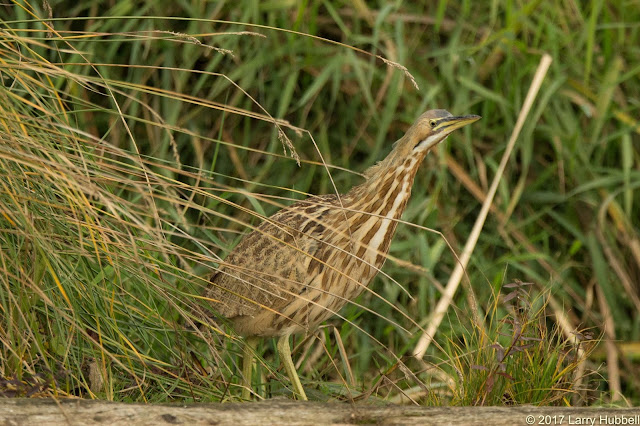 To the casual observer the American Bittern, a member of the heron family, may not be terribly exciting. Its carefully camouflaged coloring does not stand out. Its stealthy movements do not attract attention. Its long drawn-out silences, even though critical for hunting, provide no music for our ears. It would not be surprising if some consider the bittern to be a bit boring.

The most exceptional and least boring aspect of a bittern might be its call. If you have never heard a bittern, click here (and then scroll down) to be enthralled by their strangely odd and uniquely liquid sound. 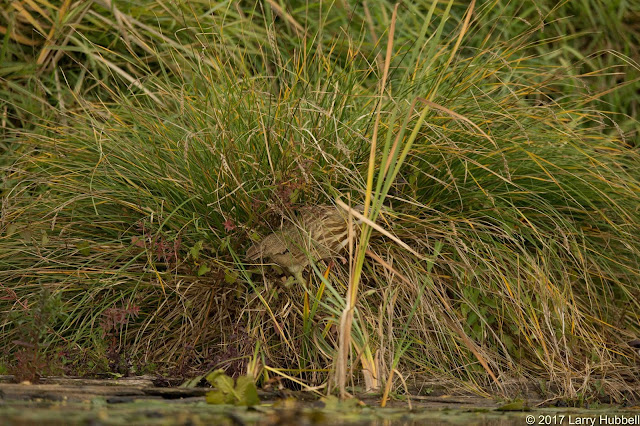 In an age of neon lights, nagging cell phones and addictive video games the silent bittern prowling through the marsh can be somewhat subtle and easy to miss. 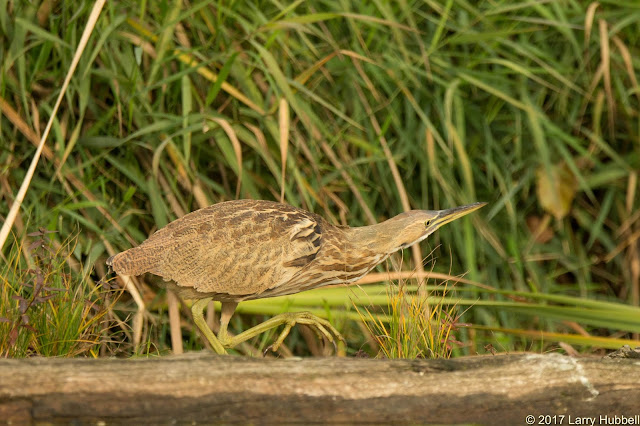 If you are lucky and patient enough to watch a hunting bittern, I suspect you will become slowly mesmerized. The bittern's slow moving style makes the green heron look like the hummingbird of the heron family.

Still, the difference between observing a creature in its natural state or focusing  on electronic devices is stark. For me, nature feeds the soul, refreshes the mind and creates hope for the future. It is never boring. Electronic interactions tend to increase my tension, drain energy and keep me awake when I should be sleeping. 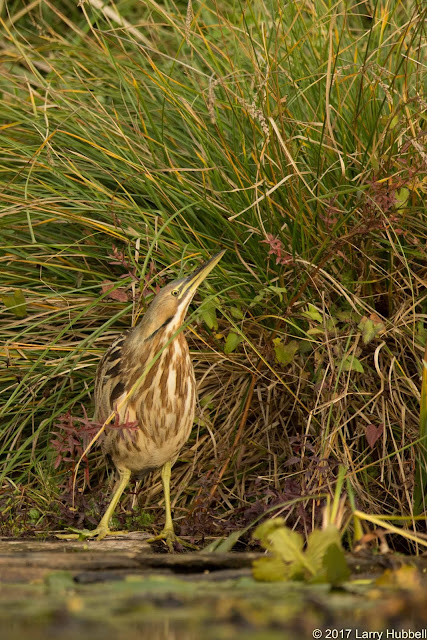 One of the intriguing and odd habits of a bittern is the way it stares at the world while holding its beak above its head. It is strangely comical, especially for such a silent and serious creature. 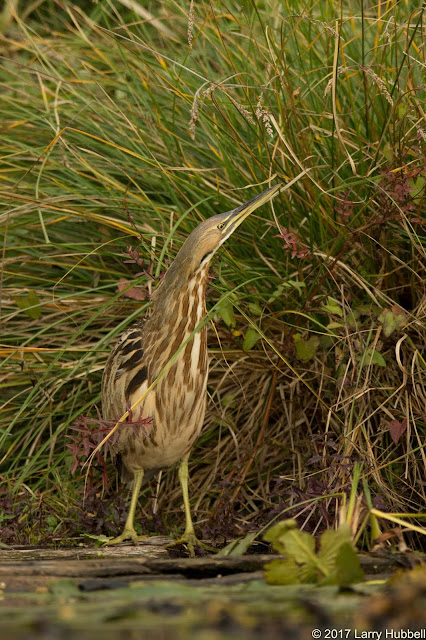 When the bittern detects a possible food source the head slowly rises. 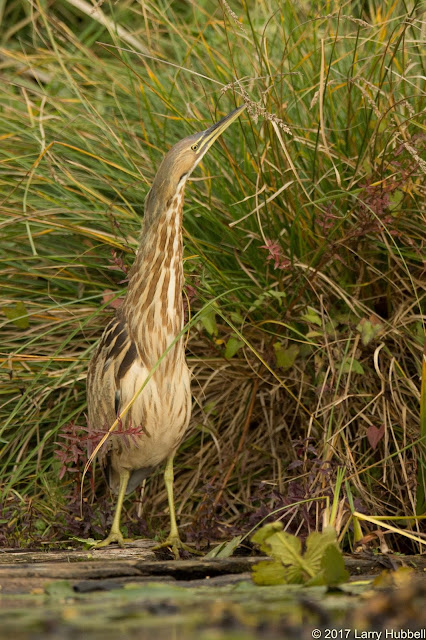 When the bittern's head reaches the highest possibly height it always makes me wonder where the neck was previously hidden. In the first photo, of this little series of three, there was virtually no sign of the bittern's neck. 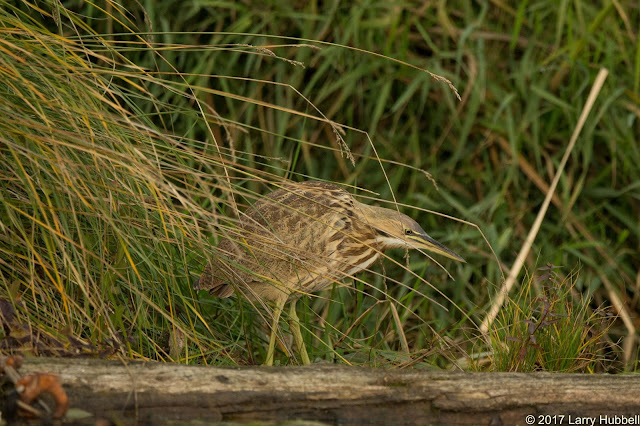 Even from the side the neck seems to disappear. Beside this heron, the only other bittern I have ever seen on Union Bay was in 2012. Click Here to see the photos and read the story. 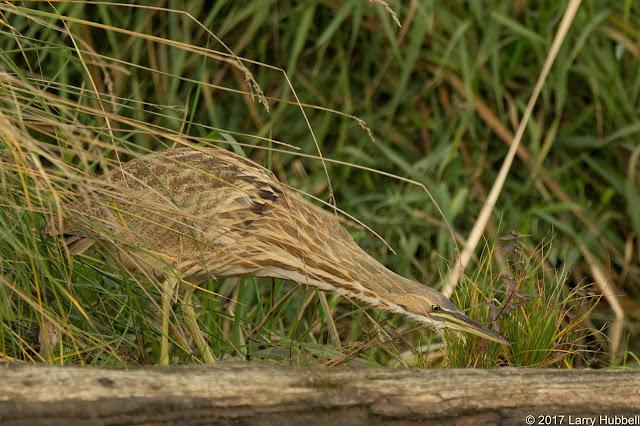 As well as extending the neck up to see potential food, the bittern will very slowly extend it down and out. Clearly, the bittern is hoping to get close enough to grab a snack - prior to the  prey sensing its impending doom.

In the book, 'Union Bay - The Life of a City Marsh' the authors (Harry Higman and Earl Larrison) mention seeing breeding bitterns on Union Bay. They also state that green herons were a new species, having just arrived to our area, prior to the book being published in 1951. 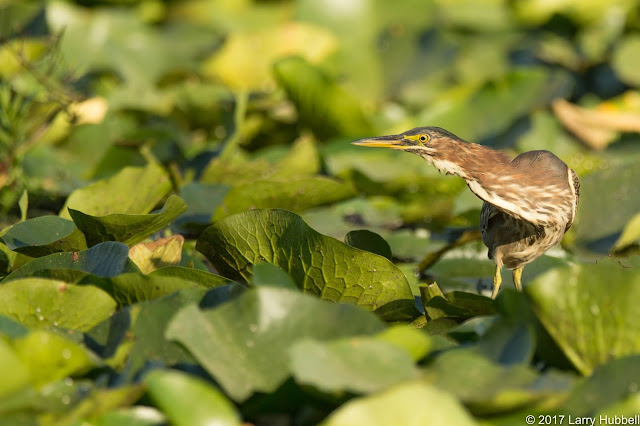 Today the situation has reversed. Every year I see the smaller green herons while the bitterns are now uncommon on Union Bay. In early September, I had six green heron sightings in a single day. All but two of the birds were in different areas of the bay. I suspect I saw at least five different birds. As my friend Teri suggested, I was most likely witnessing an influx of green herons during their fall migration.

Green herons weighs about half a pound, a bittern weighs around a pound while our great blue herons weigh in at closer to five pounds. I suspect the green heron's light weight helps explain why they can hunt from on top of the lily pads. As you can see in the photo above, green herons with their rusty red coloring and the dark green caps, are a bit less boring than bitterns. 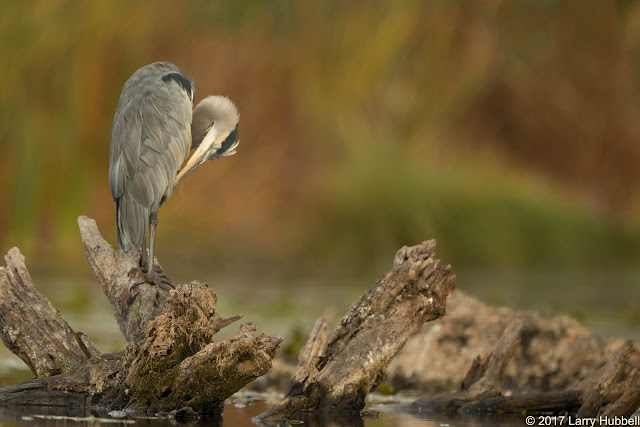 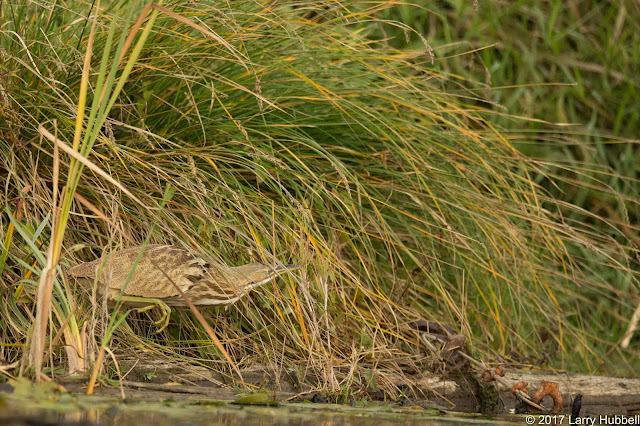 I hope we are learning how to live in harmony with nature. Specifically, I would love to see bird species, like the bittern, return and reproduce around Union Bay. Could it be that someday the new wetlands in the Union Bay Natural Area (UBNA), where the old 'dime' parking lot was, will provide just enough new habitat to entice bitterns to resettle here. It would certainly be wonderful to hear their strange liquid calls booming across the natural area in Spring. There wouldn't be anything boring about it for me.

Last week, I was lucky enough to have a short article published in the Fall Bulletin of the Washington Park Arboretum. My article, 'Birds of the Arboretum - Revisited' is an attempt to follow up on a prior article, written by Earl Larrison. Mr. Larrison's article was appropriately titled 'Birds of the Arboretum'. It was published in the Arboretum Bulletin in 1942. It is available for review in the Miller Library at the Center for Urban Horticulture. The new bulletin is available in the Arboretum at the Don Graham Visitors Center or you can link to an electronic copy by Clicking Here.

Don't miss the gentle quiz at the end of my article. The quiz provides you with the opportunity to match up the monikers for some of our local birds, from 1942, with their current names. I find the old names colorful and refreshing. They also provide us with a tiny window into the thoughts and views of a previous generation.

Without a well-funded Environmental Protection Agency, it falls to each of us to be ever more vigilant in protecting our local environments. Native plants and trees encourage the largest diversity of lifeforms because of their long intertwined history with local, native creatures. I have been told that even the microbes in the soil are native to each local landscape. My hope is that we can inspire ourselves, our neighbors and local businesses to plant native flora and to support native wildlife at every opportunity. My intention is to include at least one photo each week and visually challenge us to know the difference between native and non-native lifeforms. Can you identify these trees by their cones and needles? Are they Union Bay natives? 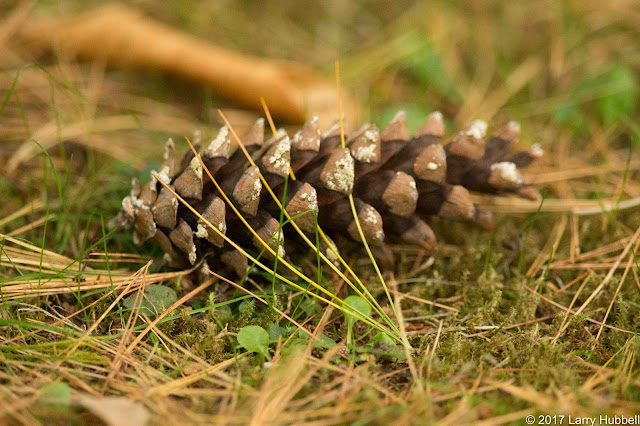 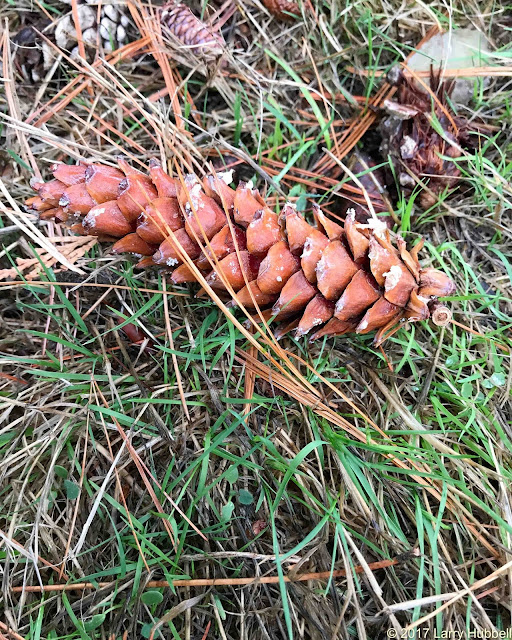 If you identified these as White Pines as a opposed any other pine, in my book, you should consider that a success. Unlike the more common Shore Pine or the long-needled Ponderosa Pine these White Pines have five needles in a bundle instead of three. At a distance the 'extra' needles create a much softer and warmer appearance, at least to my eye. Also, their cones are longer, leaner and lighter than cones of the Shore or Ponderosa Pine.

Telling the two White Pines apart is quite challenging. Our local expert Arthur Lee Jacobson, in his book 'Trees of Seattle' says, 'People often need a few years of observation before they can tell these two apart at a glance. The native (tree) is darker, denser and usually narrower.'  For me the name tags in the Arboretum also help. Plus, I find the native cones are usually a bit longer.