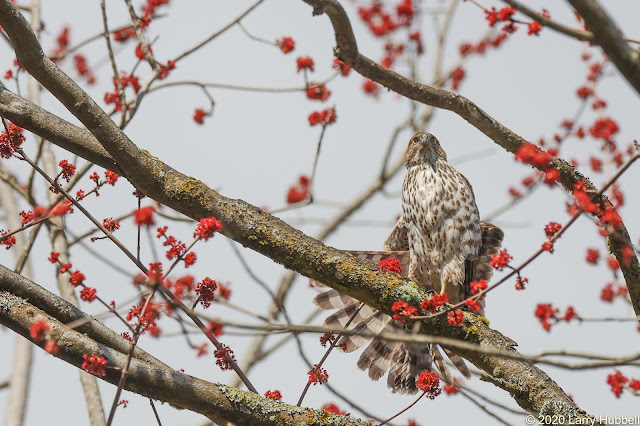 Earlier this year, we met Wanda. (Click Here to read about her May - December relationship with Walter.) In this March photo, she was in her second calendar year but most likely not yet a year old. By year-end, the dark vertical streaks or striping on the chest, indicative of her youth, will be gone.

I am assuming that I have seen her multiple times because Cooper's Hawks are territorial during the breeding season, because of her odd relationship with her mate, Walter, and because of her consistent plumage. Although, I am unable to be totally positive about identifying her. 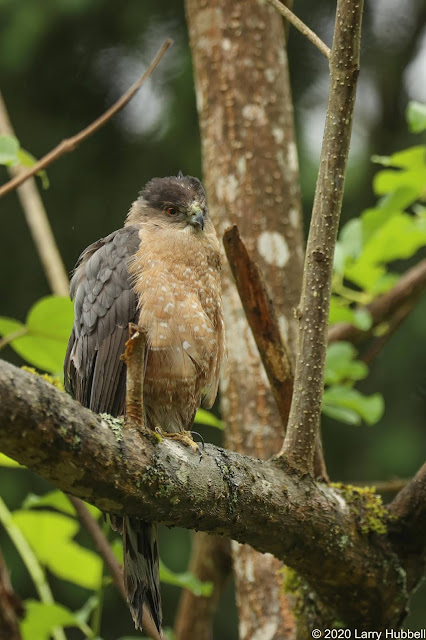 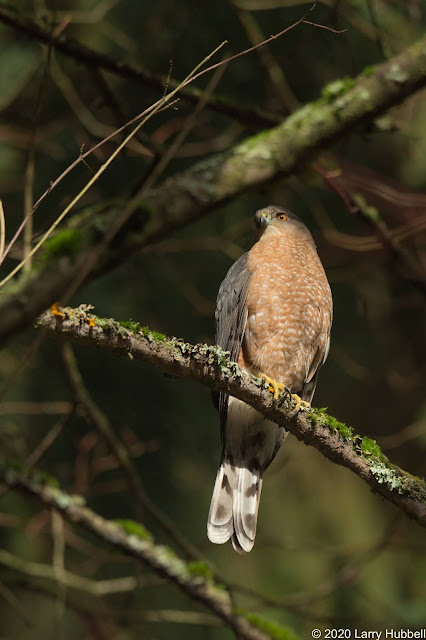 Here is an example from February in the Arboretum. The rufous barring on this hawk's chest, probably Walter, is readily apparent. 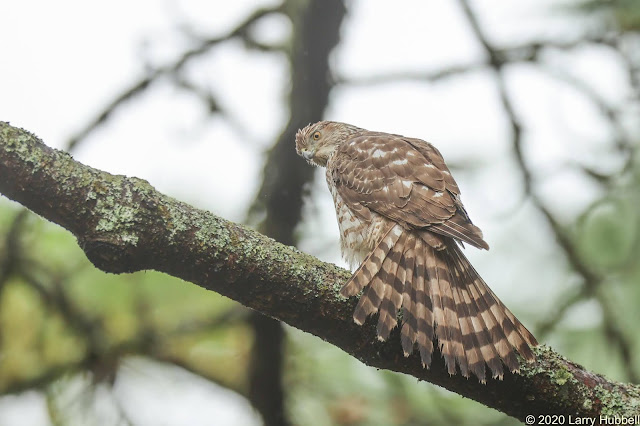 In May, I caught some photos of Wanda during the morning after a rainstorm. The tips of her tail feathers were still wet. I suspect the spreading of her tail was an attempt to help the feathers dry out 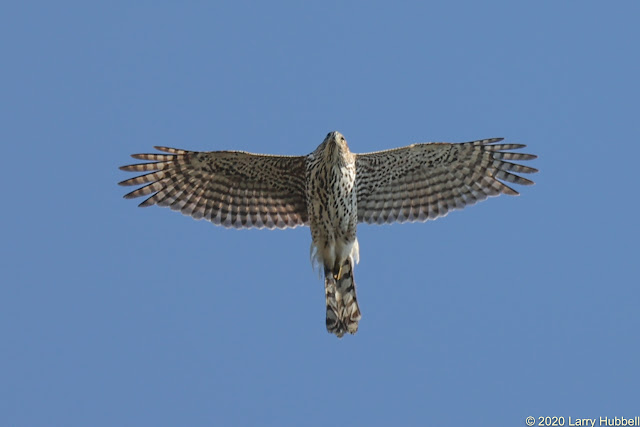 Cooper's Hawks depend on their long tails to help make fast turns while chasing elusive prey and also to avoid branches, leaves, and tree trunks while flying through the forest.

Fully grown tail feathers are around seven and a half inches long - approximately half as long as the bird. Although their tails normally appear somewhat shorter because an inch or two is generally hidden from view.

Feathers on a bird are arranged similar to shingles on a house. The feathers 'above' cover over the point where the feathers 'below' attach. In both cases, this helps to repel water. With birds, it also improves their aerodynamics. For example, it allows their wings to function as a single surface.

When birds grow new feathers the function can be interrupted. With ducks, they lose all their flight feathers at one time and can't even fly for a few weeks. (See the Going Native section in the post from two weeks ago for more about the eclipse plumage of ducks.)

Among predatory birds, they would most likely starve if they lost their ability to fly. So they tend to lose and replace just a few feathers at a time. This means their molting takes longer but they can still catch food in the meantime. (With Bald Eagles a complete molt takes two years.) 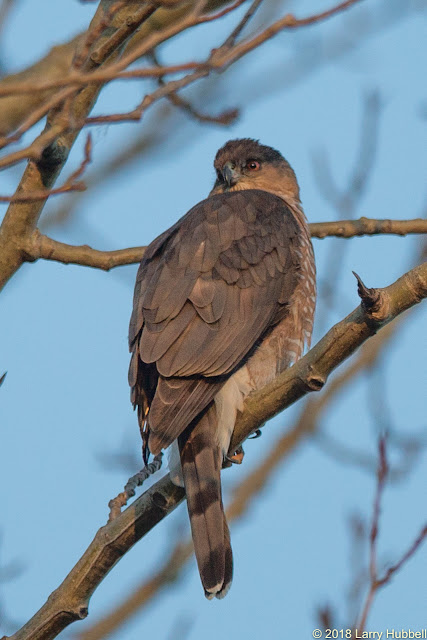 From the back, all of a Cooper's Hawk's tail feathers generally appear to be roughly the same length.

By the way, notice how the mature birds in this post have a dark 'cap' on the top of their heads. 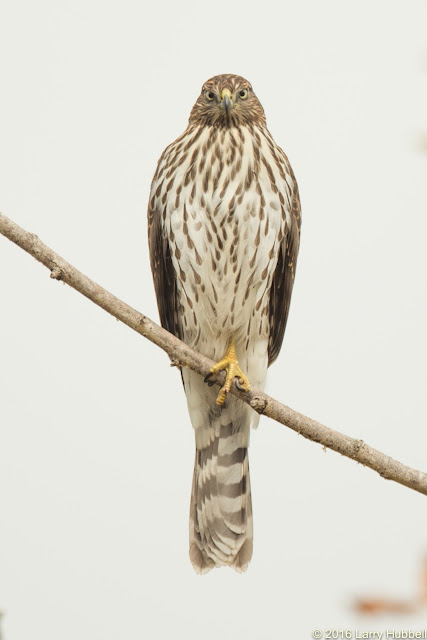 From the front graduations in length can be seen. This helps to distinguish Cooper's Hawks from Sharp-shinned Hawks. 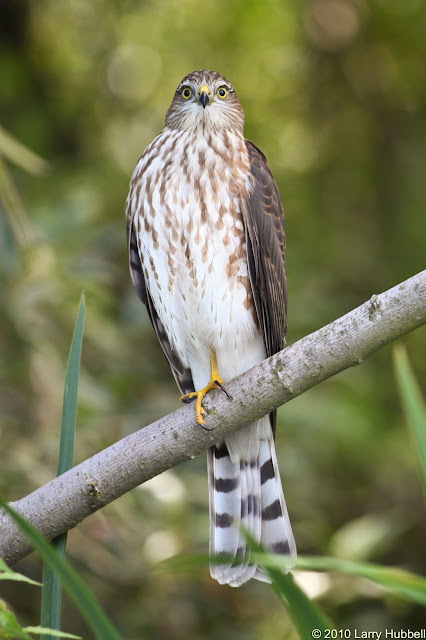 The tail feathers on Sharp-shinned Hawks look close to the same length from the front. Curiously, with regard to stripes versus bars on the chest, Sharp-shins go through basically the same developmental stages as Cooper's Hawks. 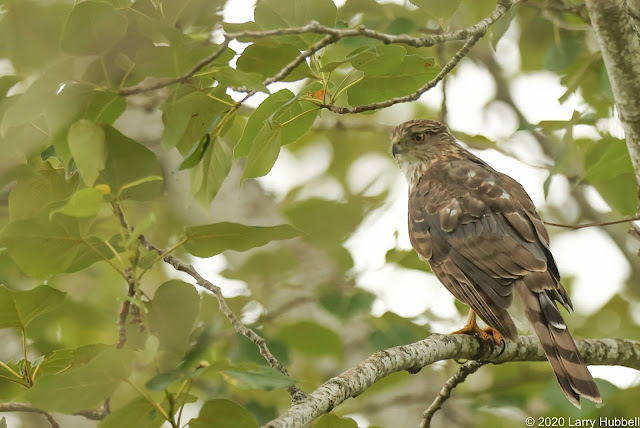 On July 8th, I encountered a second-year Cooper's Hawk at the Beaver Lodge Sanctuary northwest of Madison Park. When I mentioned it to Ed Deal, from the Urban Raptor Conservancy (URC), he suggested that it might be Wanda. 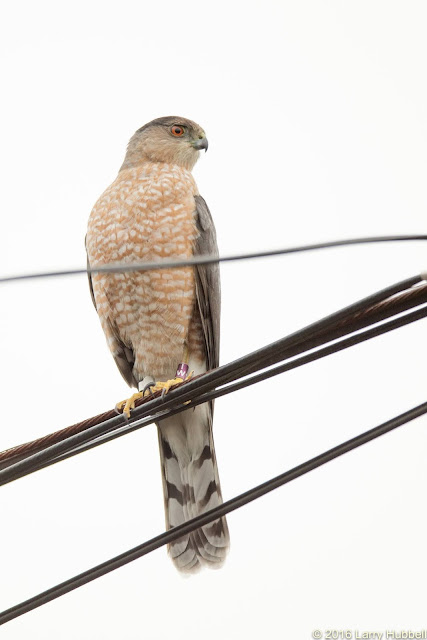 A few years ago, I was lucky enough to photograph a male, Cooper's Hawk, who had a similar Arboretum-based territory, when he was visiting Madison Park. In that case, he wore an identifying band (supplied by URC - Thank You!) that enabled me to be positive that I saw the same bird at both locations. 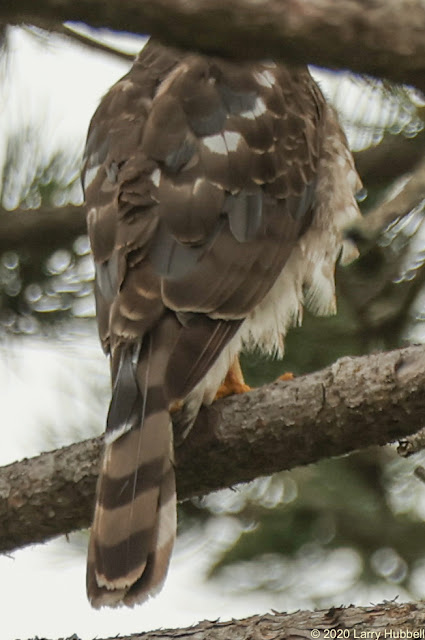 Wanda, on the other hand, has never been banded. So, in this case, I cannot be totally positive about identifying her. Although, noticing potentially unique aspects of her plumage, like this new tail feather beginning to come in, can be helpful. Notice how it is about four bars short of its full length. 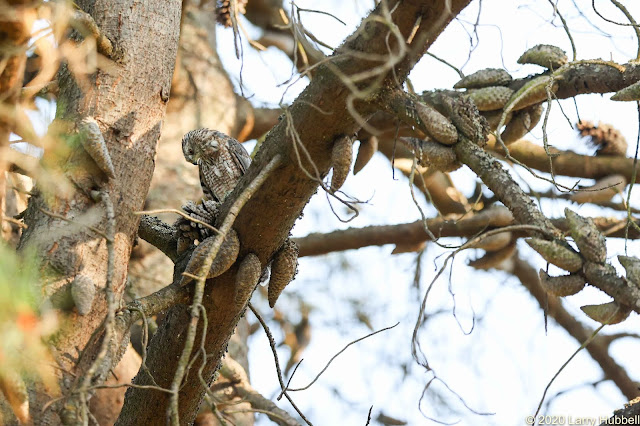 On July 21st, I watched a young Cooper's Hawk land in a tree in the Pinetum portion of the Arboretum. This was just after its potential prey, a Northern Flicker I believe, disappeared into the dark recesses of the nearby Sequoias. 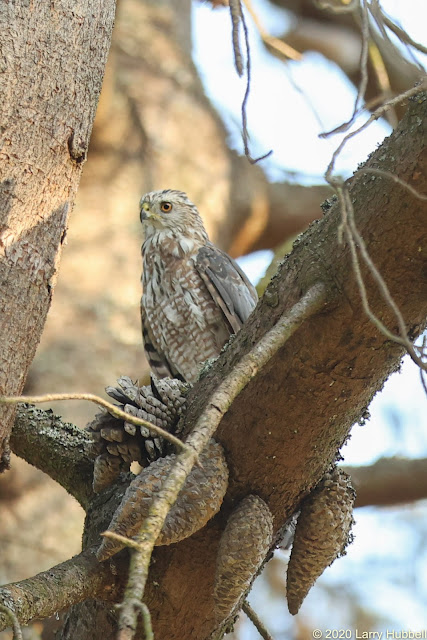 My first impression was to be stunned by the beauty and the unusual amount of white feathering on the head. Later, as I studied the photo, I realized this second-year bird was in the process of exchanging its stripes for bars. 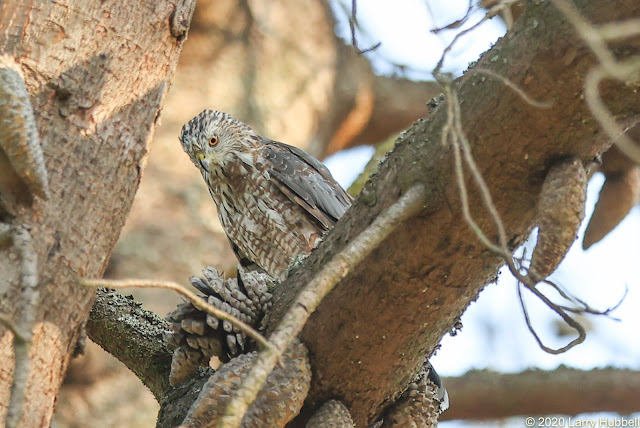 A tiger can't change his stripes, but a Cooper's Hawk can!

I wonder if the molting of feathers exposes more of the underlying white downy-like feathers. Maybe this contributes to what appears to be an abnormal amount of white on this bird's head. 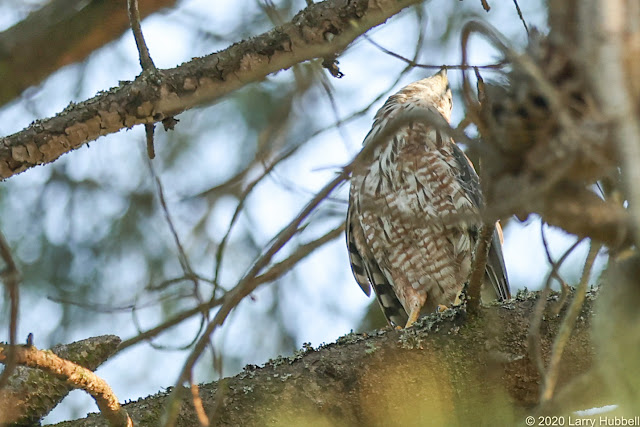 I got a final view of the mixed bars and stripes before the bird flew. 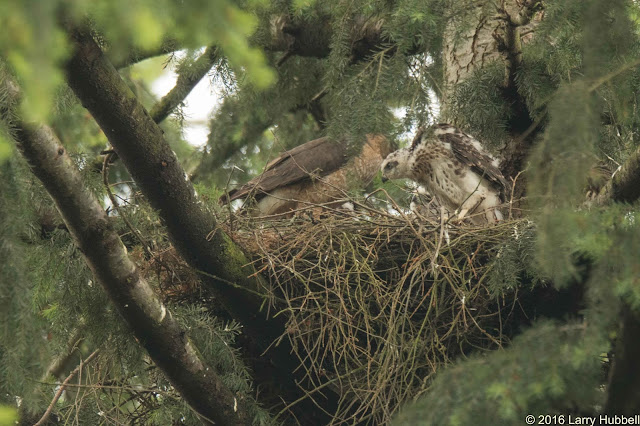 I have also seen young birds, prior to fledging, with a fair amount of white feathering. They too are probably molting into a new plumage. However, I did not remember ever catching a photo of a second-year bird in the process of molting. I decided to take a closer look at my photo collection. 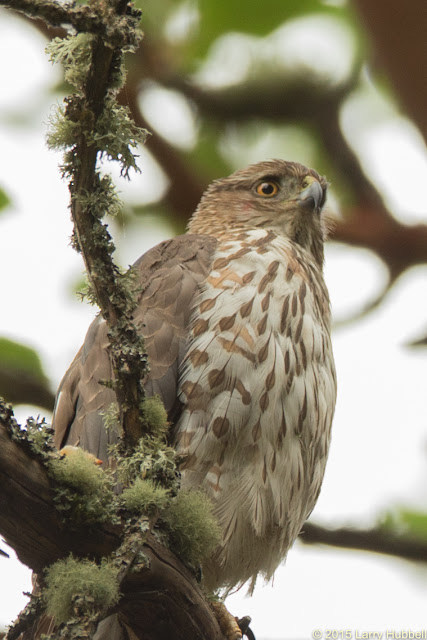 I found this 2015 photo of a second-year Cooper's Hawk with a few faint orange bars starting to show through among its vertical stripes. This was also a July photo. 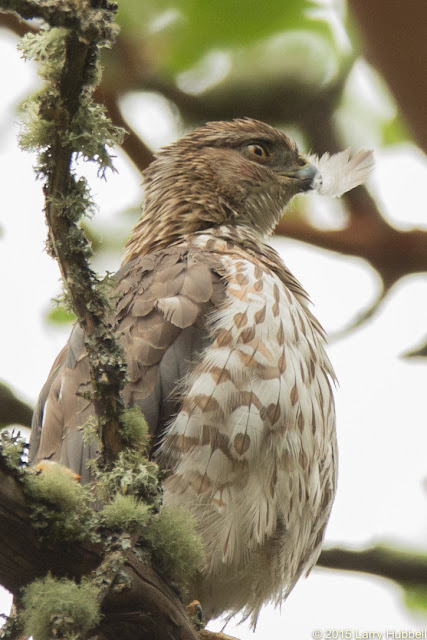 A few photos later, I saw the same bird as it plucked a feather from its chest. It makes sense if a bird is molting that the old feathers must go. 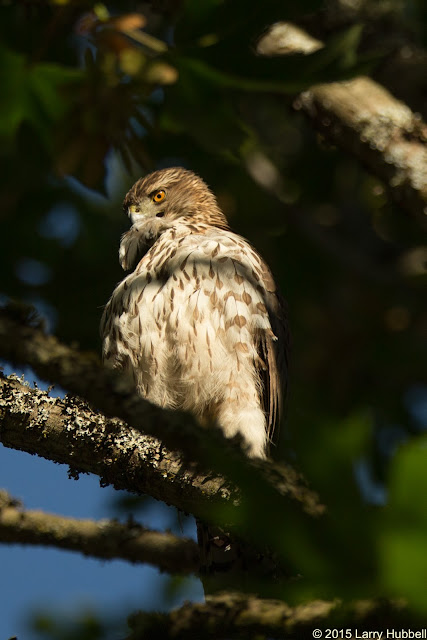 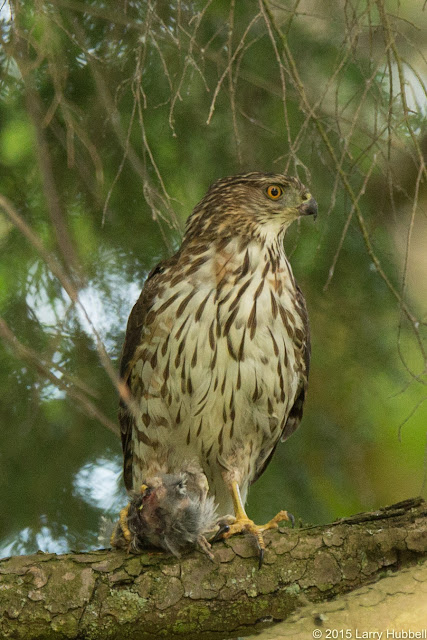 A week later I have a photo from the same area, with the same type of faint barring starting to peek out among the dark stripes and streaks. One of the interesting facts about these second-year birds is that in both cases, as they mature, their irises are turning orange. 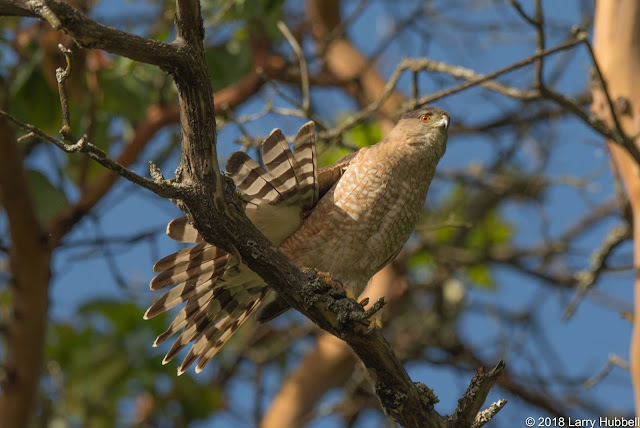 In a fully mature bird, the eye can turn from a yellow-orange to an orange-red. 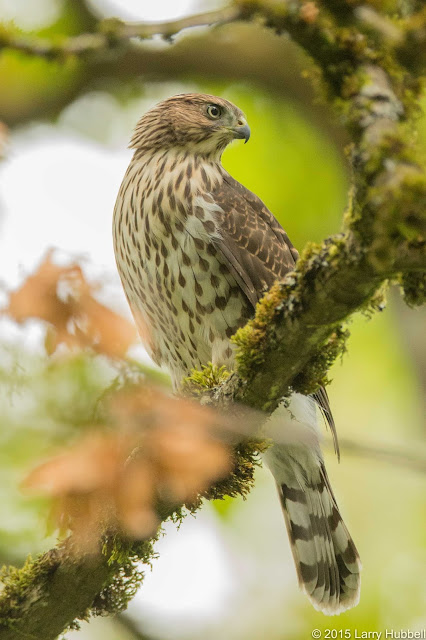 This photo of a first-year Cooper's Hawk shows stripes without a hint of barring. It also shows light-colored irises that reflect the color around them. Often a young bird's irises will look gray or blue, like the sky, but in this case, they have taken on a light greenish-yellow tint, most likely reflecting from the surrounding deciduous leaves. The feathers on the bird's back have a clean pristine look with unmarred light beige edging on the end of each dark feather. 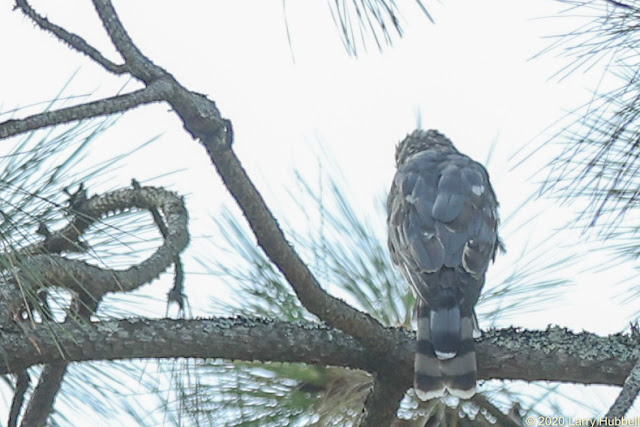 Back in the Pinetum, the second-year Cooper's Hawk flew towards the sun and perched for a moment before continuing its hunt. It allowed me to catch a couple of surprising photos of its tail. 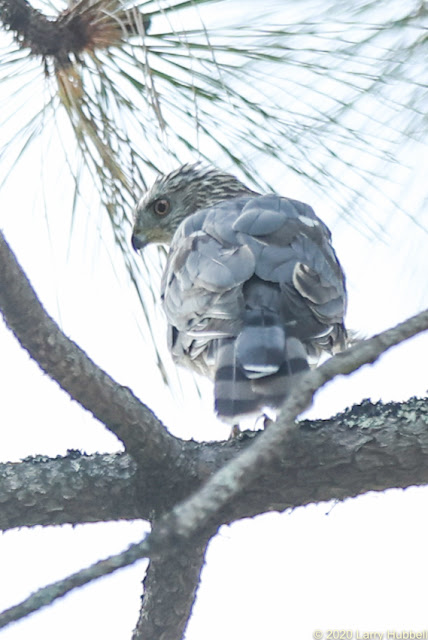 Given the location, the age of the bird and the central tail feather growing in I suspect this is Wanda. If so, then the feather grew about two stripes further down the tail in two weeks. I am guesstimating a growth rate of approximately one half an inch a week.

During the last month, I have occasionally seen a Cooper's Hawk in the area. I suspect it is Wanda. I have not been close enough to catch a photo. Either way, I wish her well. I hope in 2021 she finds a functional mate who helps her to properly repopulate Union Bay.

Have a great day on Union Bay...where nature lives in the city and Black Birders are welcome! 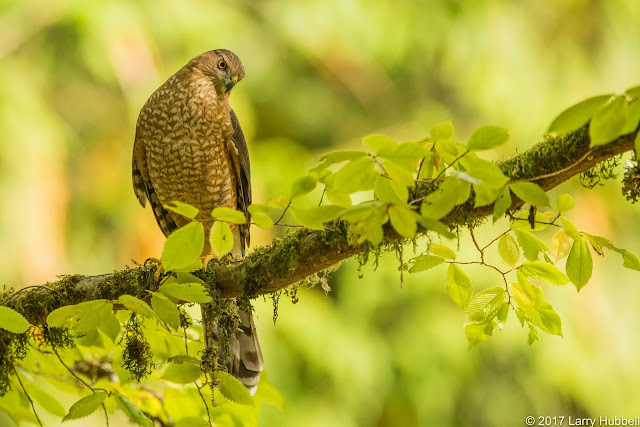 Are Cooper's Hawks native to Union Bay all year-round?

Cooper's Hawk's: Curiously, all the sources I can find show Cooper's Hawks as migratory breeders who visit Union Bay primarily during the warmer part of the year. Birdweb lists them as uncommon during the colder months of the year. Certainly, their numbers decline in the winter.

However, when I search by database by month I find local photos of Cooper's Hawks in every month of the year. I wonder if their year-round range is moving north? Is this another sign of climate change?


Does the following photo show a first or second-year Cooper's Hawk? 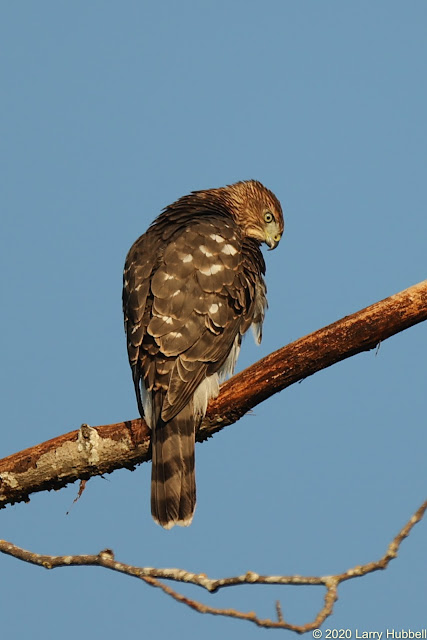 The light spots on the back say first or second-year bird to me (as does the lack of a defined dark 'cap' on the head). The light-colored Iris suggests it is still in its first year.
Posted by Larry Hubbell at 1:03 PM