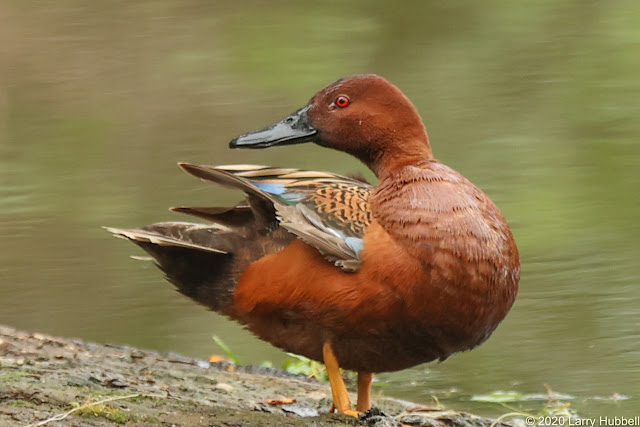 A male Cinnamon Teal, in breeding plumage, is a feast for the eyes. There are many beautiful birds to be found around Union Bay, however, spatula cyanoptera is truly a magnificent creature.

I believe the term spatula, in the scientific name, refers to its spoon-like bill which is somewhat similar to that of a Northern Shoveler. The term cyanoptera evidently refers to the blue and green colors on the wing. Small hints of the blue can be seen in this photo. The reference to the word cinnamon in the common name is beautifully obvious. 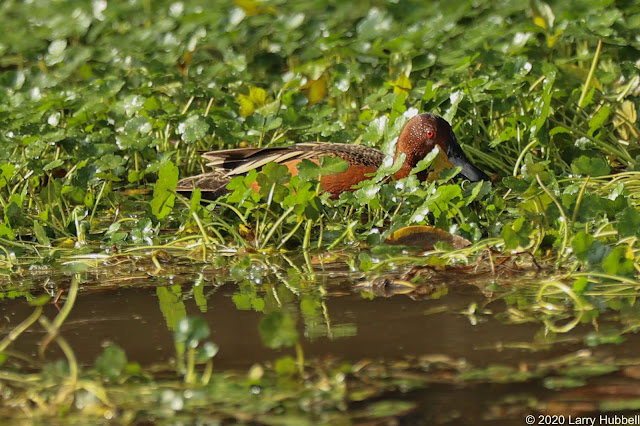 In mid-April, when I first saw this particular bird, it was half-hidden in the pennywort. I was standing on Oak Point to the west of Duck Bay. Click Here to see my map of the area. 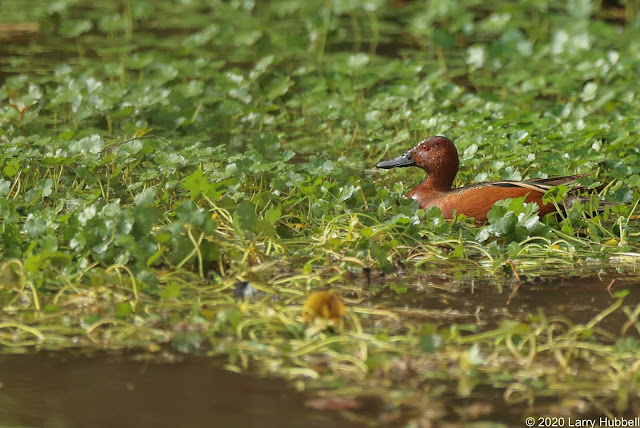 I do not consider Cinnamon Teals a common duck. Although, Birdweb (Click on the Find in WA tab) does call them 'fairly common' in the Puget Sound area, during late spring and summer. I suspect Cinnamon Teals are the least common migratory duck that regularly visits Union Bay during breeding season.

Almost every year, I see a few at the Union Bay Natural Area (UBNA). I seldom see them on the south side of Union Bay. Apparently, there is a significant difference between the UBNA habitat and the environment around Duck Bay and Foster Island.

Whatever that difference may be, it is not readily apparent to me. Although, the south side has had direct freeway runoff for more than fifty years. I wonder if Cinnamon Teals will spend more time around Foster Island and Duck Bay when the automotive pollution stops flowing into the water? 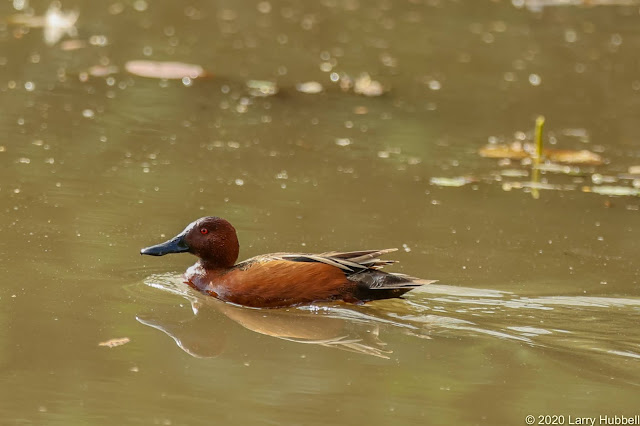 Mesmerized, I watched the duck work its way west. Soon the Teal passed around the north end of Elderberry Island and out of sight. I quickly turned and headed south, west, and then north. I finally arrived with a view of the water to the west of the island. The Teal was gone. I assumed it had flown and started looking for other wildlife. 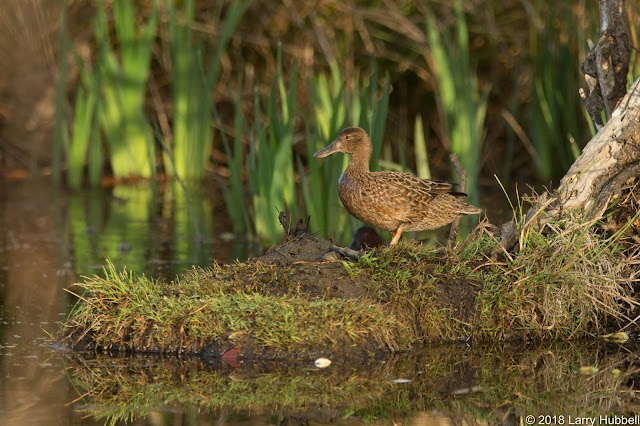 Here is a photo of a female Cinnamon Teal from two years ago in the UBNA. They are very similar to female Blue-winged Teals. The C. Teal has a slightly larger bill and... 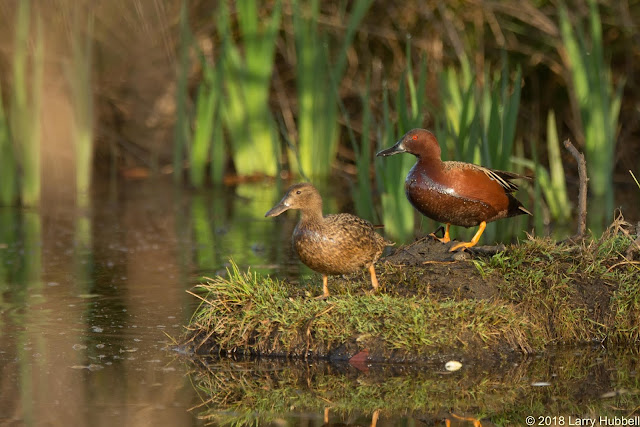 ... if she attracts a male Cinnamon Teal that is also a good identifying hint. 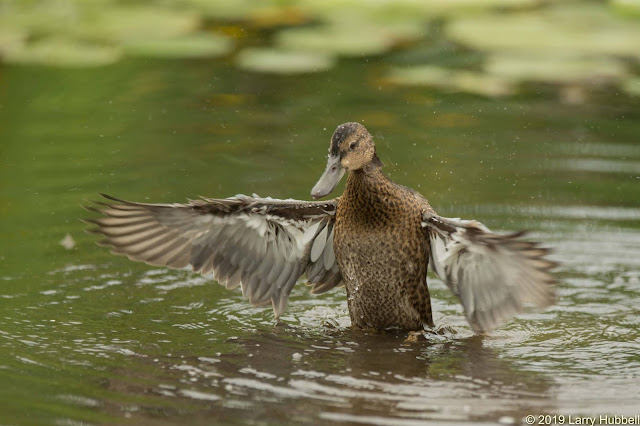 In both the male and the female the underside of the wing is a surprisingly nondescript mixture of mostly pale colors.

On the other hand, actually, I should say on the upper side of the wing both sexes have a large patch of blue, a triangle of white, and a smaller patch of green which is the speculum. As you will see, these colors are brighter on the males. 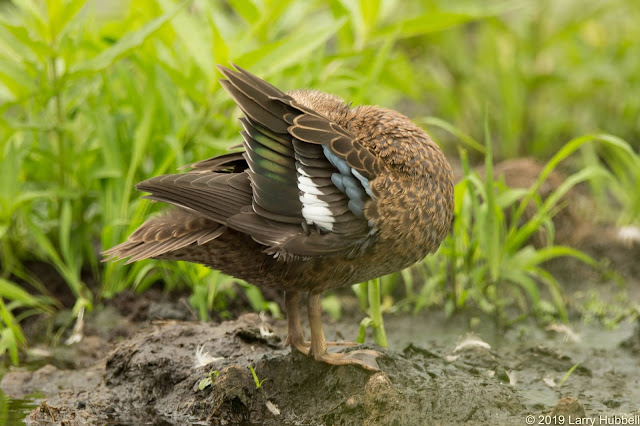 A close up of the female shows the faintness of her green speculum. Given the way the blue feathers were not fully grown (in mid-July of 2019), she may have been molting.

In April 2020, while standing to the west of Elderberry Island, it suddenly occurred to me that the Cinnamon Teal may not have flown after all. While I was following the mainland trail around the island, and the Teal was hidden from my view, it could easily have turned and worked his way back towards Duck Bay. Once again I hurried around the island and back to my original location. 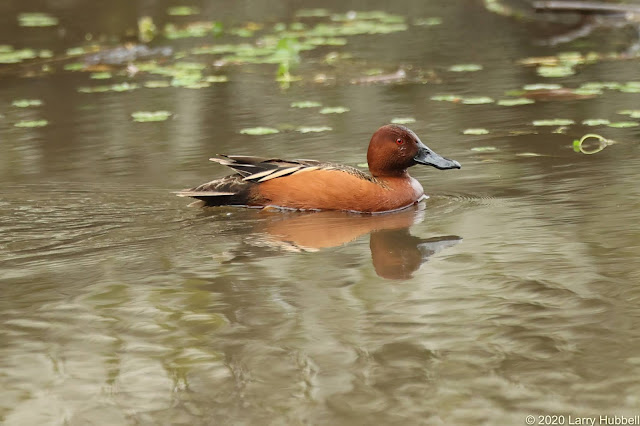 To my surprise, the Cinnamon Teal was there. 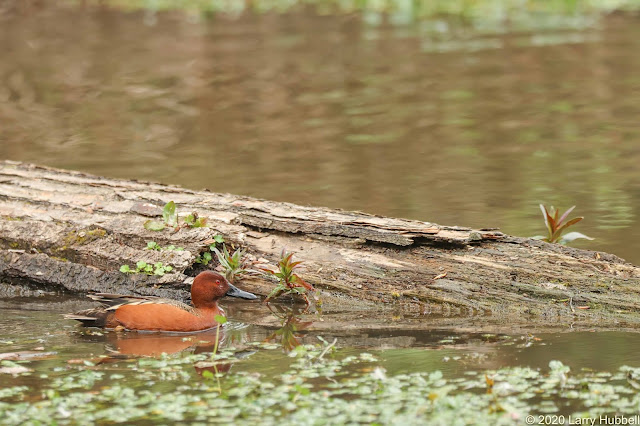 It swam east until it arrived at the remains of a beaver-cut cottonwood. 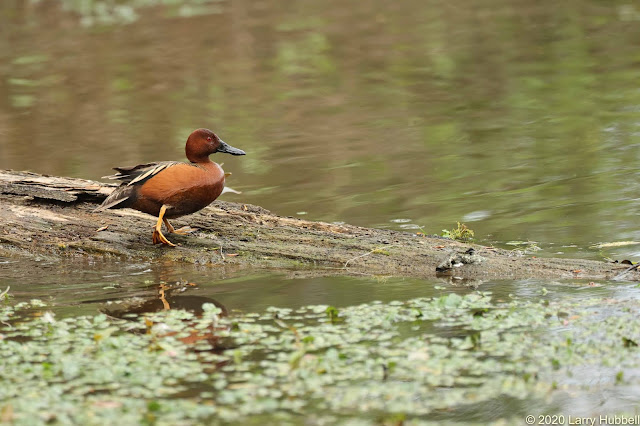 When it hauled-out on the log the dampness of its underside was readily apparent.

While looking at this photo, the full-body view made me pause to consider how big is a Cinnamon Teal. Even though they have a classic duck shape they weigh less than half as much as a Mallard. On average, they even weigh less than a Crow. 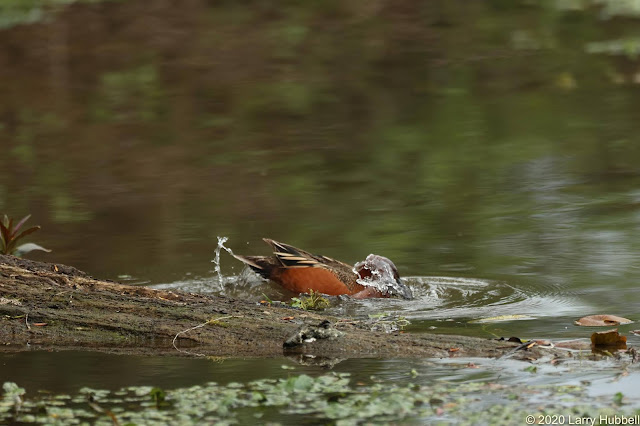 It was getting late in the afternoon and the Cinnamon Teal was apparently well-fed and ready for a bath. 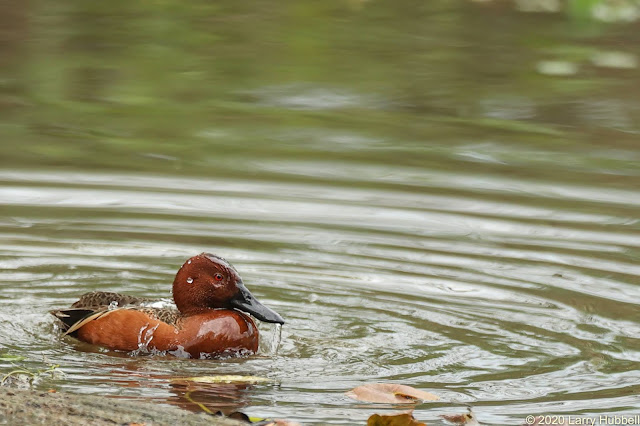 The water running off of its head and chest gave it an almost plasticized-looking shine. 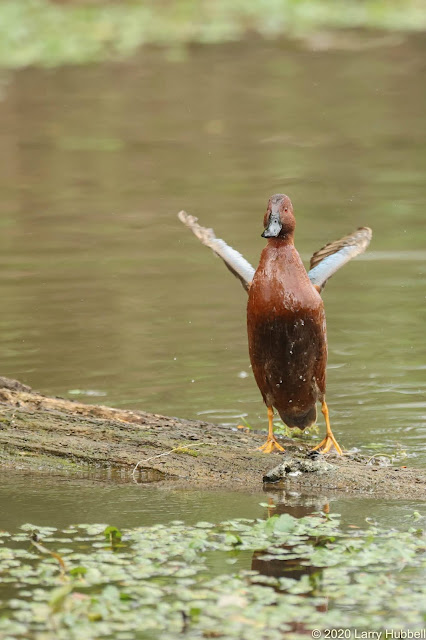 Afterward, when it stood to shake off the water, I caught a brief glimpse of the large blue patches on the upper, leading half of its wings. The only other species with similar patches, that I know of, are Blue-winged Teals and male Northern Shovelers. 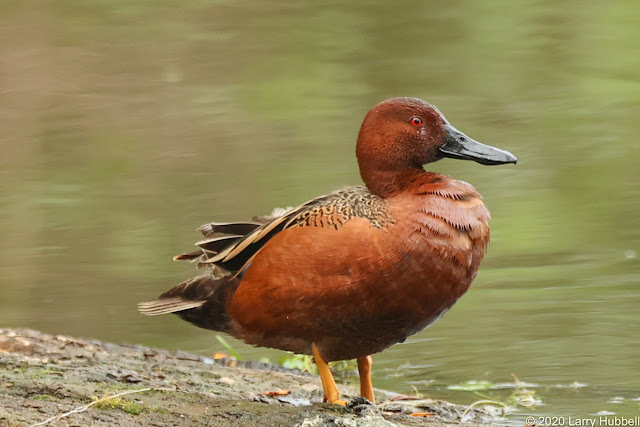 After bathing, its next thought was apparently preening. I remember thinking, How in the world could a bird this gorgeous and handsome be standing around in the middle of the breeding season without a mate? 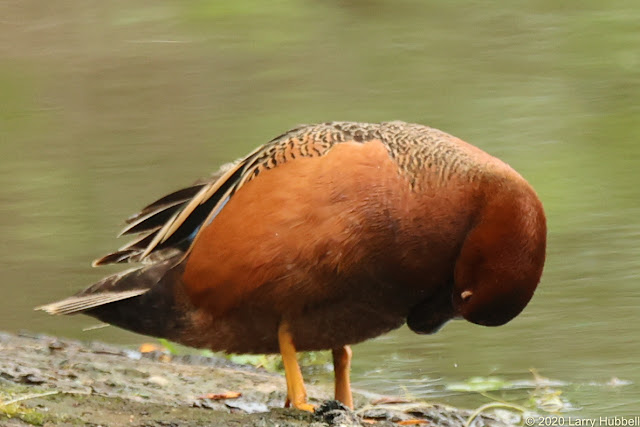 When he leaned forward, to pluck at his chest, he exposed the thin wavy black lines running across his back. Every detail of his plumage is incredibly exquisite. 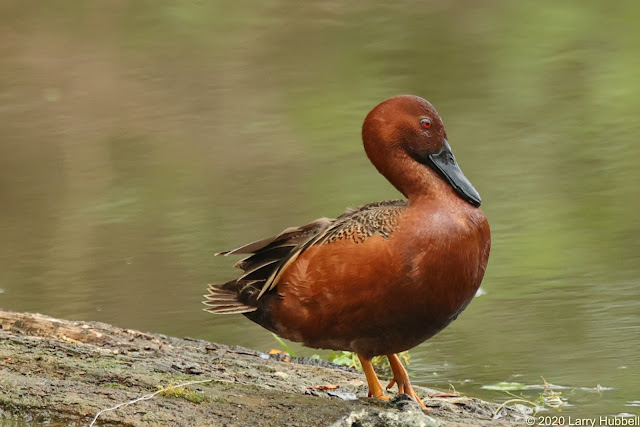 The Cinnamon Teal did its best preening-pelican imitation. 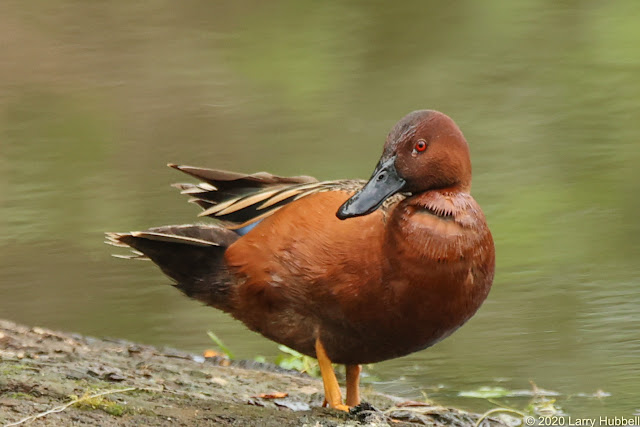 Our North American Cinnamon Teals migrate north from Mexico and California and breed primarily in the Rocky Mountains and west to the Pacific Coast. Southwestern Canada is the limit of their northern migration.

Surprisingly, there is a completely separate population of Cinnamon Teals in the south half of Southern American. This group is essentially non-migratory and apparently never mixes with our North American population.

Wouldn't it be interesting to do genetic research on the two populations? I wonder which is the younger group? Did migration originate out of the non-migratory group or was the South American population initiated by a pair of misguided migratory North American birds? 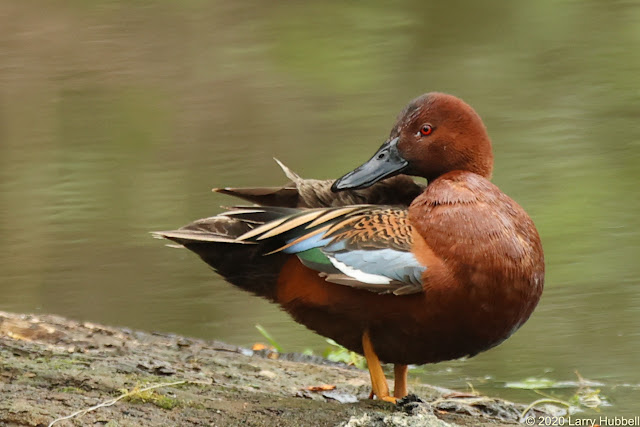 While our hero was preening he revealed a nice glimpse of his blue wing feathers and a hint of his vibrant green speculum. 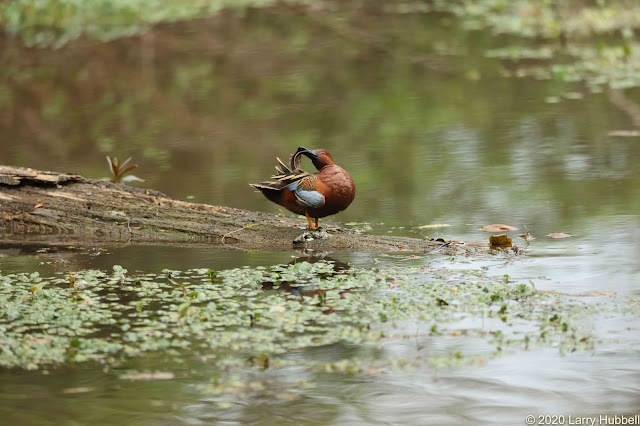 When he straightened one of his primary wing feathers... 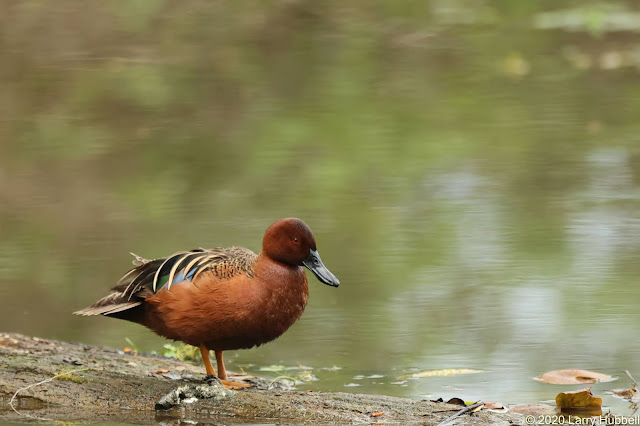 ...it drew attention to their alternating gold and black coloring. 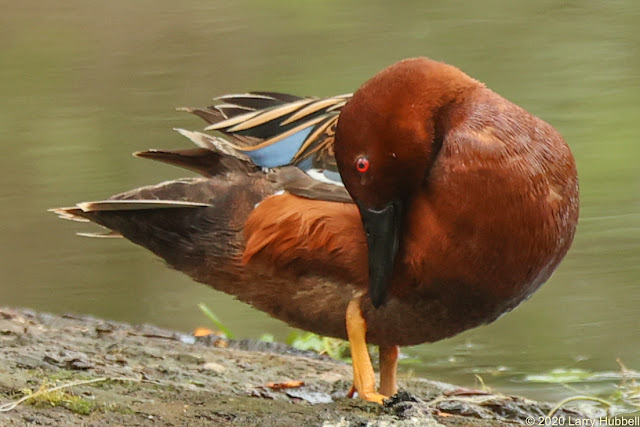 His fiery red eyes will remain even when he molts into eclipse plumage, later in the summer. The female-like, camouflage coloring of eclipse plumage will increase his odds of surviving while he grows new flight feathers.

When he tucked his head and went to sleep I headed home for dinner. Since that day, I have not seen a single Cinnamon Teal on the south side of Union Bay. I wish him well wherever he ended up. I hope he found a mate and they produced a nest full of young.

By the way, the title Sienna Cyan was to help make the point that a Cinnamon Teal has two names which both refer to its colors. Shouldn't the name Cinnamon Teal feel as odd as calling a Red-winged Blackbird a Red Black?

Have a great day on Union Bay...where nature lives in the city and Black Birders are welcome! 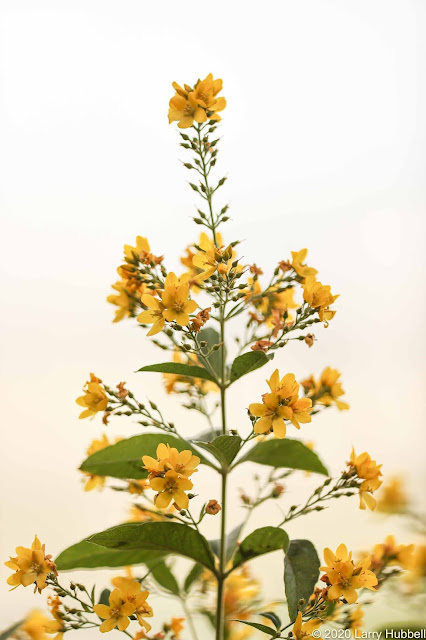 To what species does this plant belong? Is it native to Union Bay?

Garden Loosestrife: It is a noxious, invasive, and undesirable weed. Since it is flowering now this is a good time to identify it. Click Here to learn how it should be dealt with in King County. 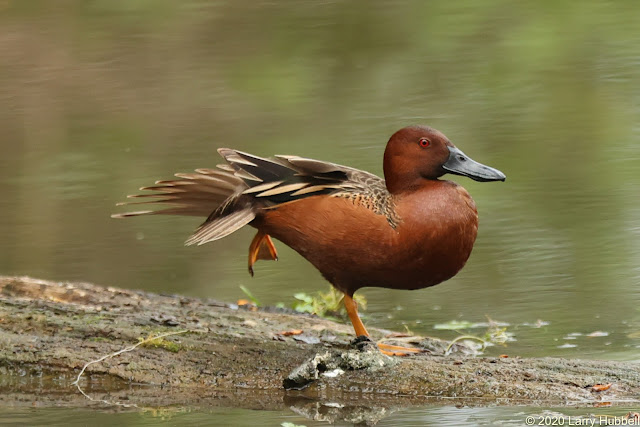