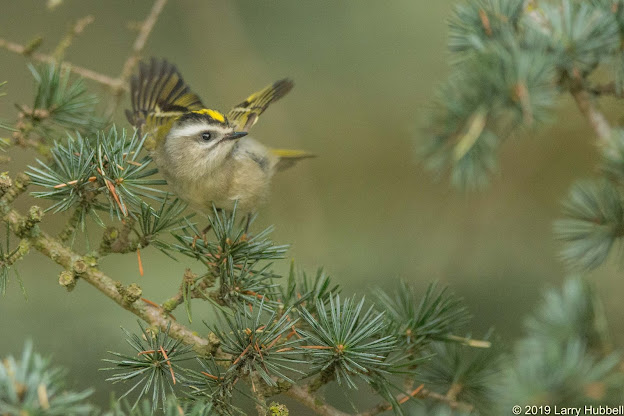 Golden-crowned Kinglets are flashy little birds. However, they are not flashy in a reflective way, like an Anna's Hummingbird. 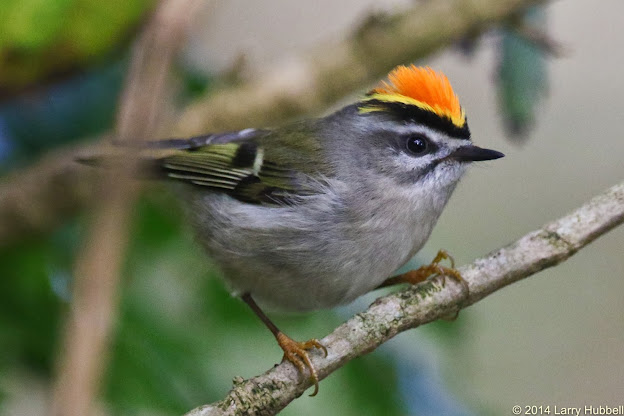 They only time I consider their plumage to be flashy, is when a male occasionally exposes his brilliant orange crest to a territorial intruder. 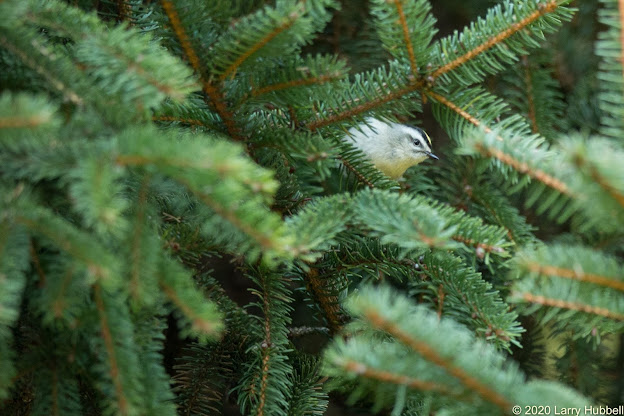 I think of them as flashy due to the way they fly. They dash in and out through the needles and leaves of trees. If you can follow the flight path of a kinglet for more than a few minutes you should count that a success. Kinglets are constantly changing their minds and darting off in new directions. 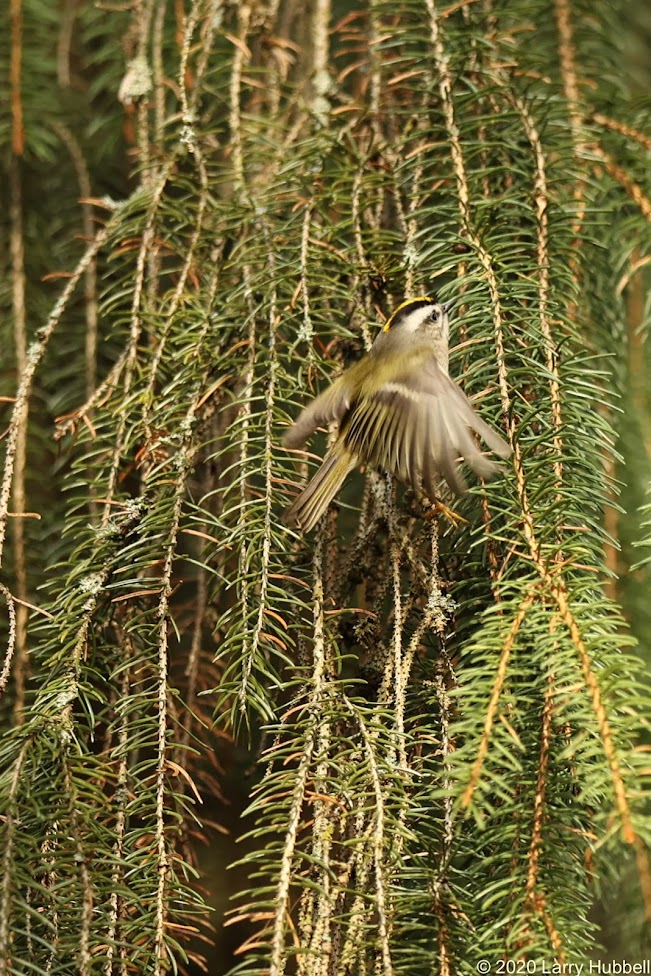 They also occasionally hover and flash their wings at the foliage in front of them. I suspect this behavior is used to inspire the movement of their microscopic prey. A fatally flawed reaction that converts their quarry from consumer to consumed. 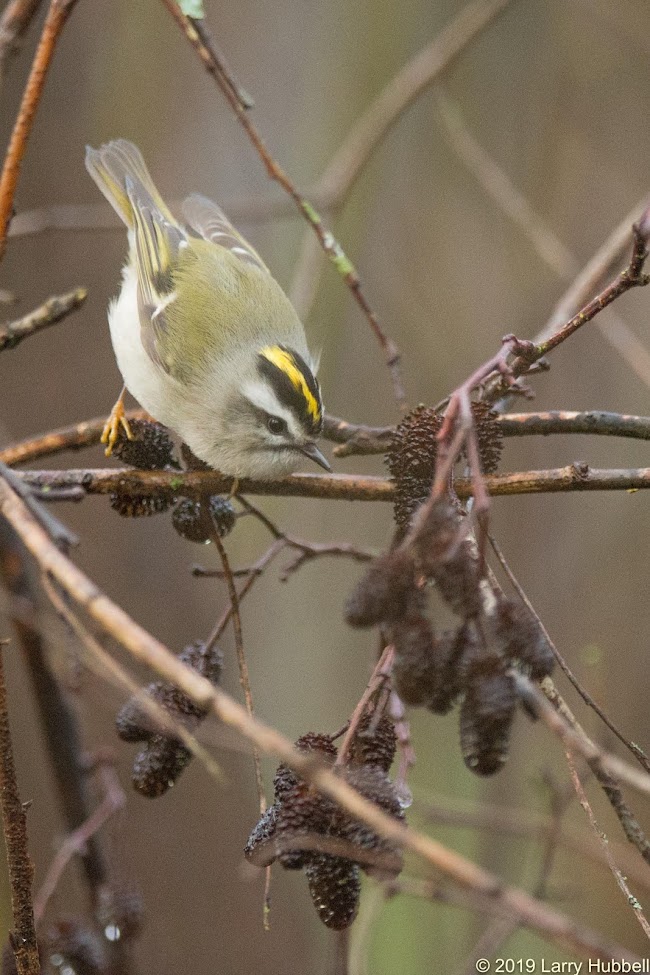 However, flashing their wings is not their dominant hunting technique. 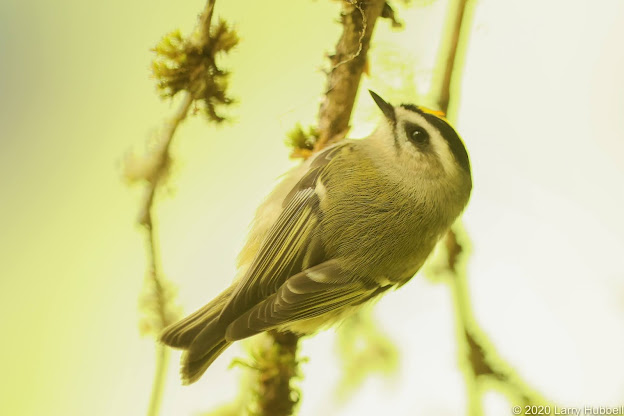 Being incessantly curious is clearly the key to their success. They look under... 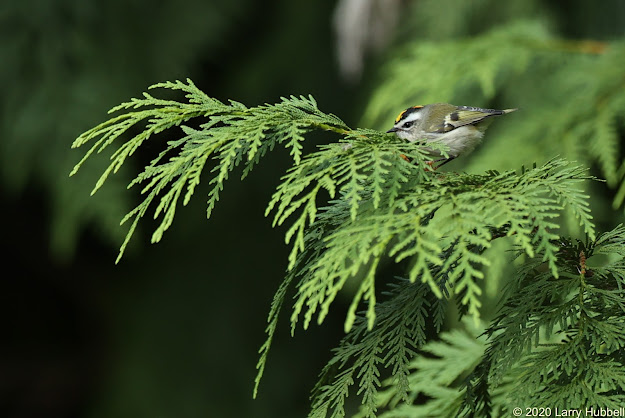 ...over, behind, beside, below, in, out, and around almost every piece of foliage, they pass. Occasionally they will even hunt on the ground. Although this approach is far more common in the winter. You can read about their amazing cold weather adaptions in a prior post called Our All Weather Bird. 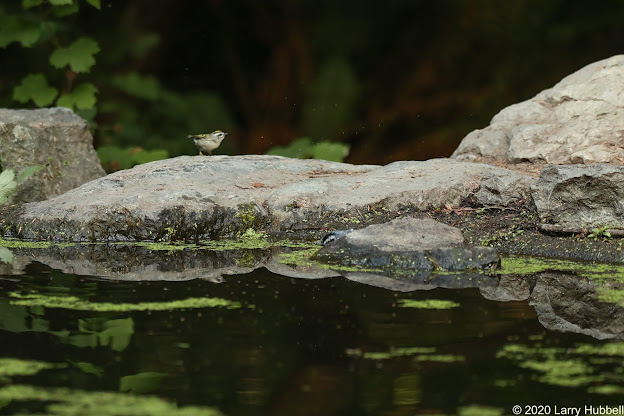 In August, I was surprised to see a Kinglet on a rock by the Woodland Pond in the Arboretum. I was even more surprised when one flew out vertically, just a few inches above the surface of the water. It appeared to catch a small insect before returning to shore. 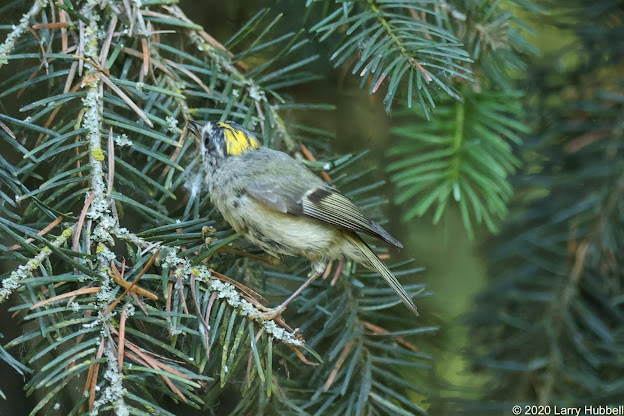 Earlier, in mid-June of this year, I was startled to see this Kinglet with an abnormally wide yellow crown falling down the back of its head. June is their primary month of the year for egg-laying, although Birds of the World says it can start as early as mid-May.
All About Birds says they require 15 days to incubate their eggs and approximately two and a half more weeks until the young fledge. In total, almost exactly a month. 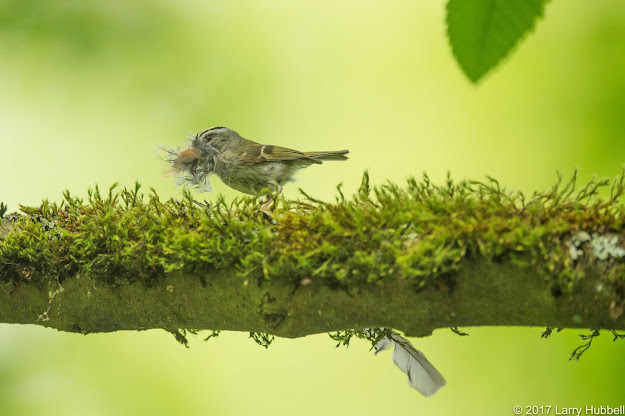 This May 17th photo from 2017 shows the timely gathering of nesting material by a Golden-crowned Kinglet.
What does the feather below the branch tell you? (My perspective can be found later in this post.) 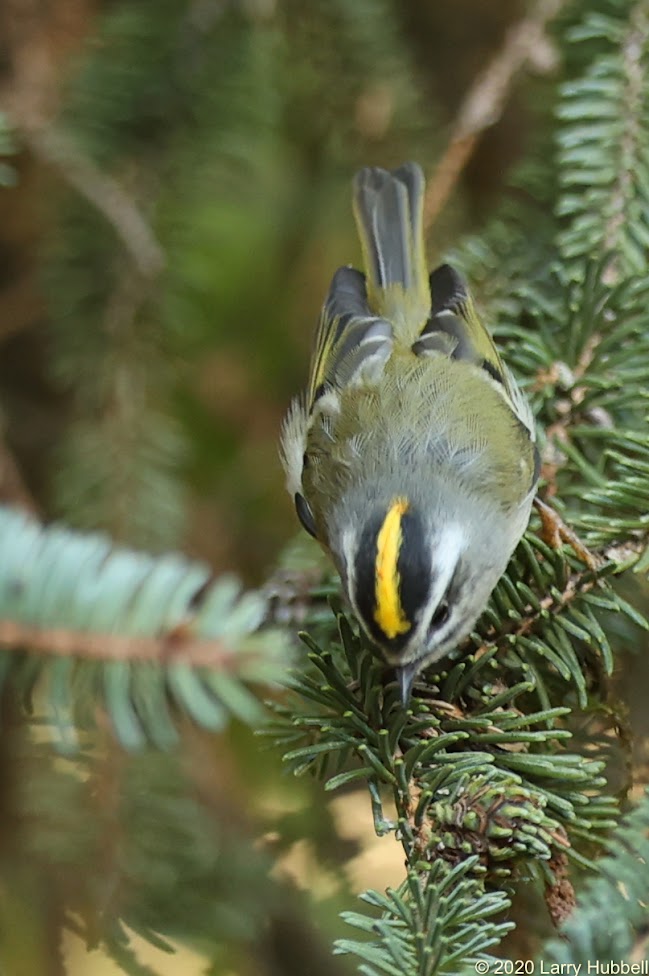 Normally, a single narrow stripe of yellow on the head indicates a mature Golden-crowned Kinglet. 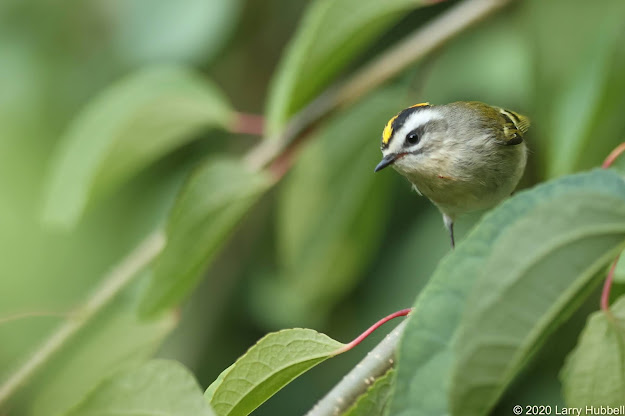 Since both males and females have a yellow 'crown' it does not help to distinguish their sex. 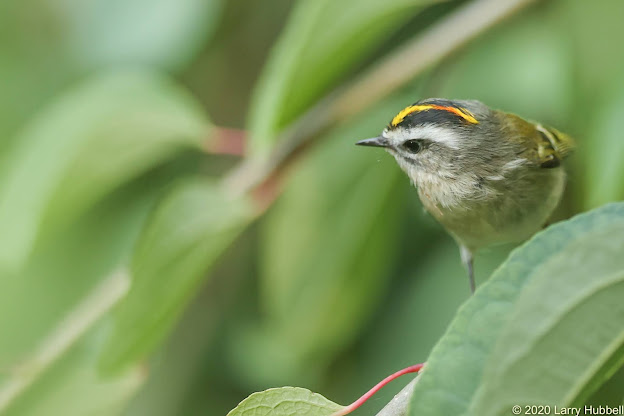 However, even just a tiny hint of orange indicates the bird is male. 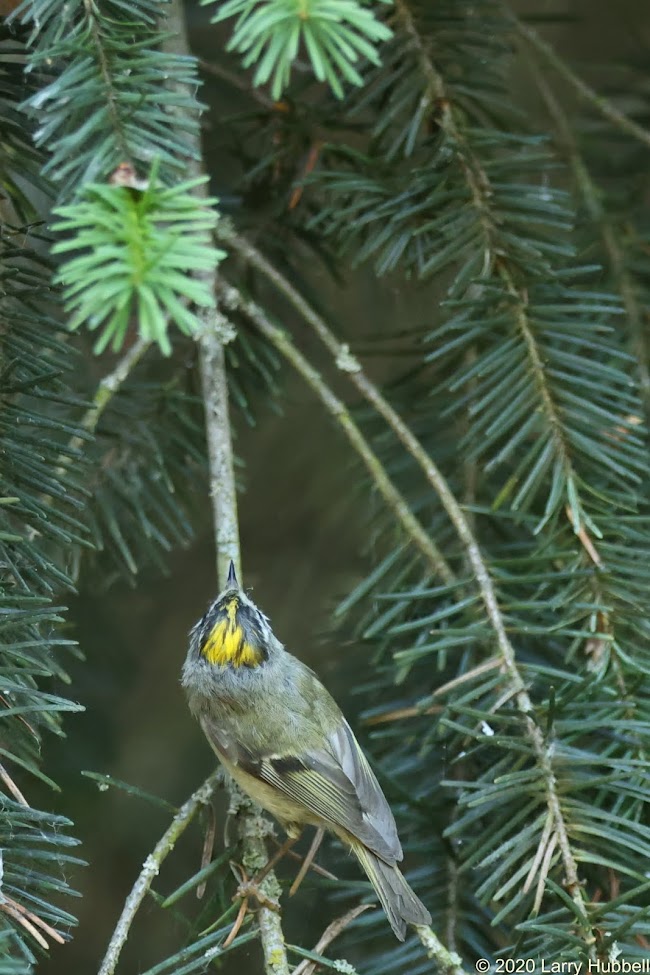 When I saw this exceptionally wide patch of yellow my first reaction was to mentally revaluate this bird species. Nothing else seemed to fit. No Warbler, Tanager, or Goldfinch seemed appropriate. 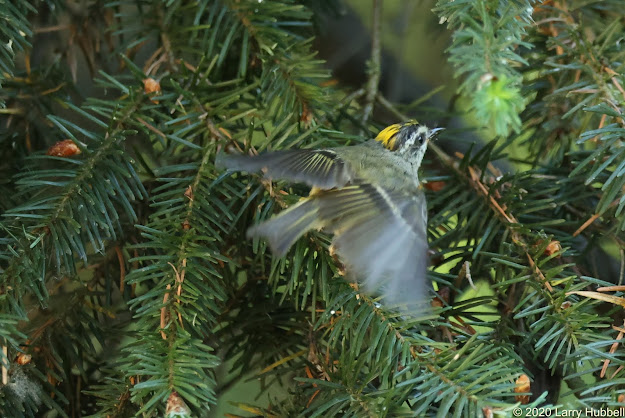 The pattern of black and white on the face and the wing bars confirmed it was a Golden-crowned Kinglet. Next, I began to wonder if this bird was mature or immature? 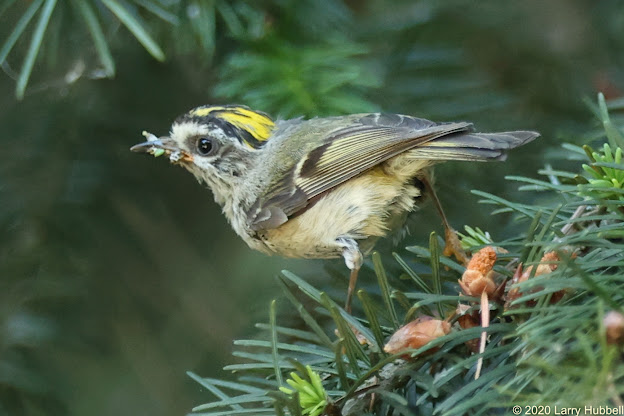 A closer look shows just a hint of orange-yellow on the gape i.e. where the bill hinges. This indicates an immature bird. If the egg that held this bird was laid in mid-May, right at the beginning of the season, then there would have been, just barely, time for incubation, nestling, and fledging. 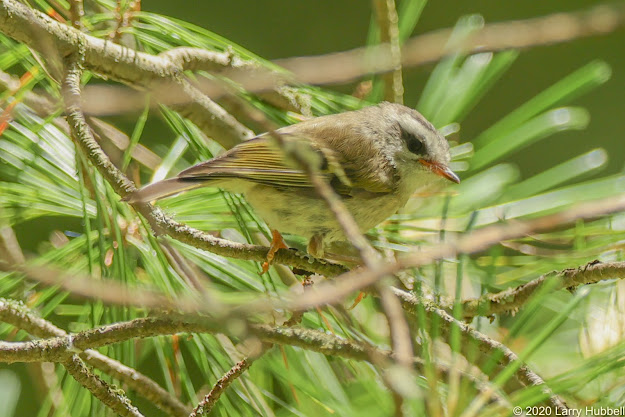 This young bird which I saw the next day had much more conventional immature coloring. There was no visible yellow on top of the head. According to my Sibley guide you birds may lack the yellow crown all the way into August. This young bird also had a more colorful gape and the black and white on the side of the face was far less defined. This too fits with Sibley's depiction of a young Golden-crowned Kinglet. 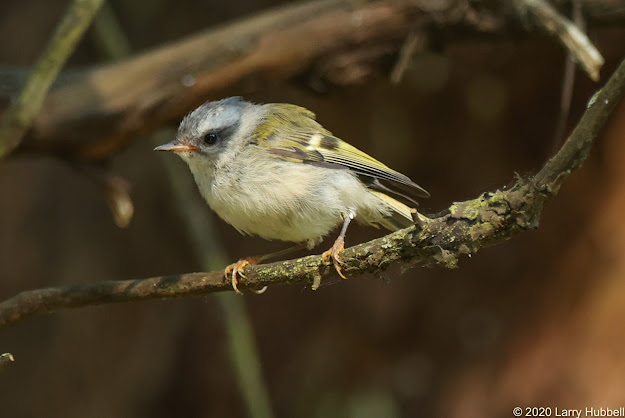 A similar look from a photo taken three days later. 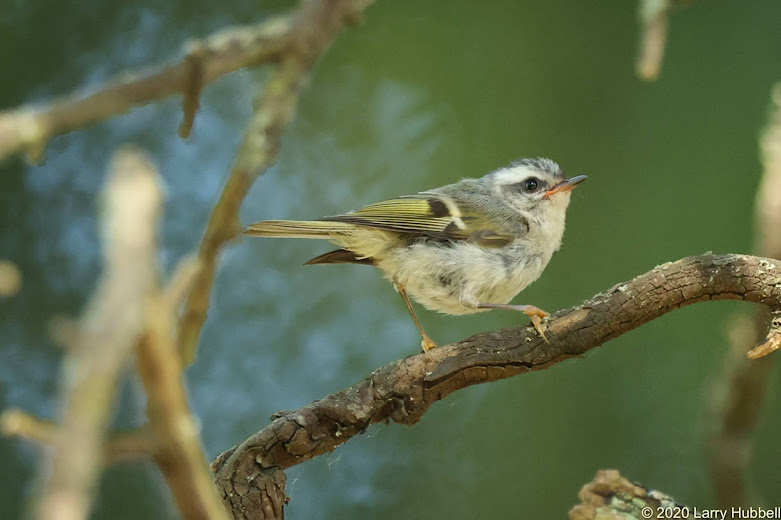 The black and white on this bird's face seems a bit more defined than with the previous bird. However, a little variation between individuals and of course variation overtime should not be surprising. 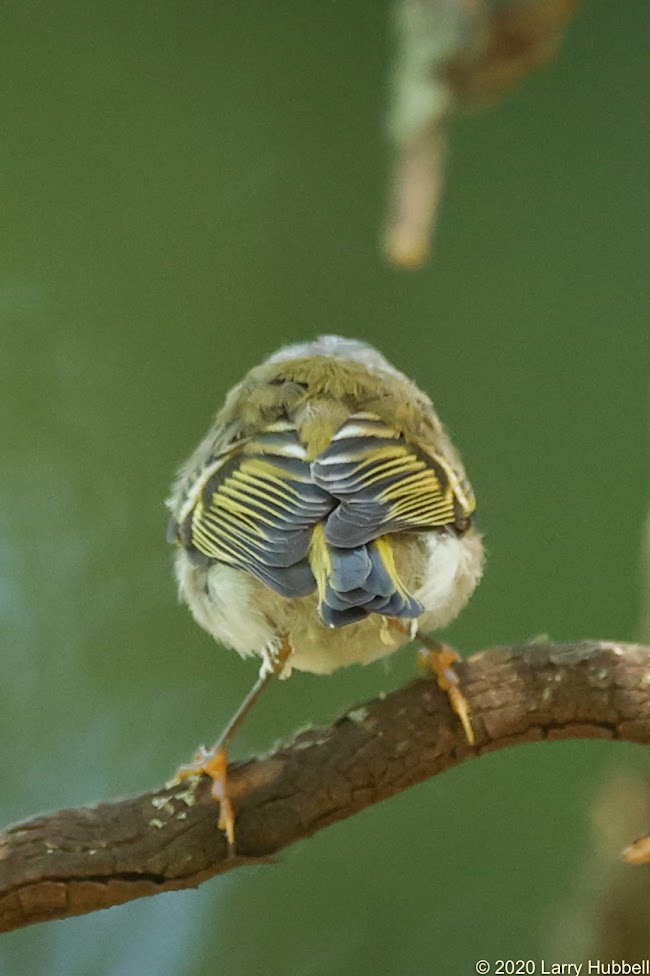 When this bird turned away it was fun to notice the crisp golden edging on its flight feathers (remiges) and the outer part of its tail feathers (rectrices). 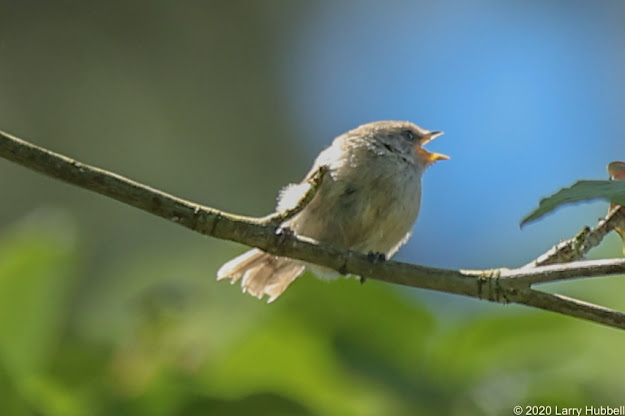 Later the same day, I found another young bird begging for food. 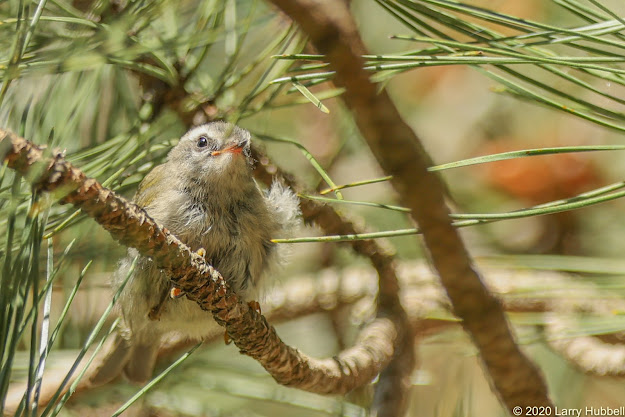 Three days later another one was still in the process of losing its downy fluff. 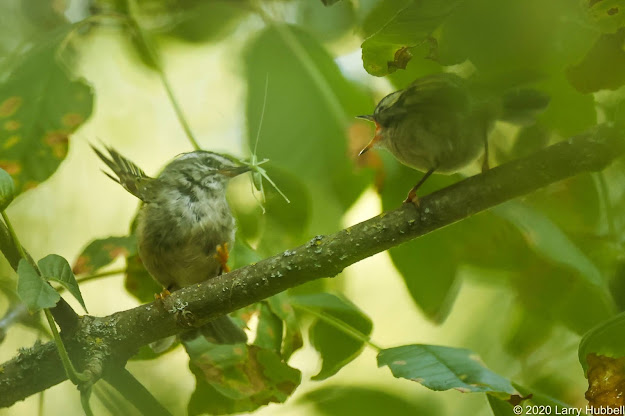 This early August photo adds one more level of confusion. The bird on our left is bringing food to the young bird on the right. However, the bird on the left still has a hint of a yellow gape. 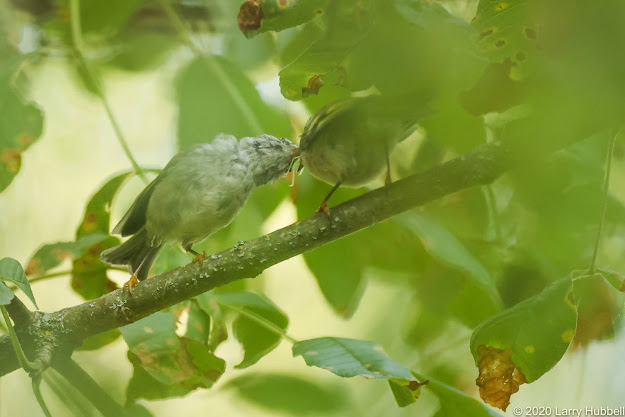 The feeding occurs.
I have thought of two potential scenarios that might explain this situation.
A) Could the bird on the left be in its second calendar year, while still having a little yellow on the gape, while being mature enough to be a parent?
Or
B) The bird on the left is a young bird from an earlier brood in this year, that is helping the parents by feeding a sibling. Golden-crowned Kinglets normally have two broods per year so it makes sense that the younger bird (on the right) could be from a second brood.
I just reviewed several years' worth of Golden-crowned Kinglet photos during the months of January, February, March, and April. I could not find a single photo that displayed a Kinglet with a light-colored gape. My tentative conclusion is to favor the second possibility.
In regards to the early bird with the wide yellow crown. It sure seemed to be ahead of schedule for mid-June, e.g. having a yellow crown already, a relatively small light-colored gape and well defined black and white facial markings. Maybe Golden-crowned Kinglets are laying eggs earlier than what has been previously documented. This could be partially substantiated if anyone in the area has a photo of an immature (e.g. with a yellow gape) Golden-crowned Kinglet dated before June 15th.
Regarding, the feather below the branch in the 2017 photo. The feather appears much too large to belong to a Golden-crowned Kinglet. Since predatory birds will often eat their prey on horizontal, moss-covered branches I suspect this was the site of a prior meal. Most likely, the Golden-crowned Kinglet spotted some leftover downy feathers and decided to use them to line the inside its nest.
Sadly, today is not a great day to enjoy Union Bay. I hope you are staying indoors and avoiding the smoke.
All the best,
Larry
Recommended Citation

Going Native:
Without a well-funded Environmental Protection Agency, it falls to each of us to be ever more vigilant in protecting our local environments. Native plants and trees encourage the largest diversity of lifeforms because of their long intertwined history with our local environment and native creatures. I have been told that even the microbes in the soil are native to each local landscape. I hope we can inspire ourselves, our neighbors, and local businesses to respect native flora and to support native wildlife at every opportunity. I have learned that our most logical approach to native trees and plants (in order of priority) should be to:
1) Learn and leave established native flora undisturbed.
2) Remove invasive species and then wait to see if native plants begin to grow without assistance. (If natives plants start on their own, then these plants or trees are likely the most appropriate flora for the habitat.)
3) Scatter seeds from nearby native plants in a similar habitat.
4) If you feel you must add a new plant then select a native plant while considering how the plant fits with the specific habitat and understanding the plant's logical place in the normal succession of native plants.
My intention in my weekly post is to include at least one photo each week and visually challenge us to know the difference between native and non-native lifeforms. 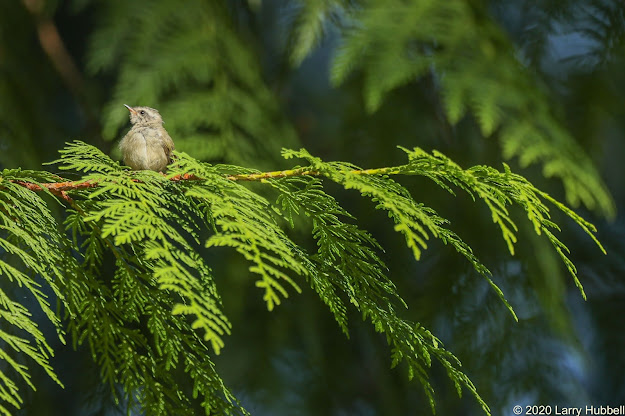 What type of tree is this young Golden-crowned Kinglet sitting in? Is it native to Union Bay?
Scroll down for the answer.
***************
Western Red Cedar: Not just a native tree it has been called the Tree of Life.
***************
The Email Challenge:
Over the years I have had many readers tell me that Google is no longer sending them email announcements regarding my posts. Even more frustrating when they go to 're-sign-up', hoping that will enable them to once again start receiving the announcements, they get a message which says 'Sorry, you are already signed up.' Google has not responded to my requests for help with this issue.
My functional workaround is to set up my own email list and each week I manually send out a new post announcement. If you are experiencing the issue and would like to be added to my personal email list please send me an email requesting to be added. Thank you for your patience!
My email address is: LDHubbell@Comcast.Net
***************
For those who read to the end here a couple more Golden-crowned Kinglet photos. 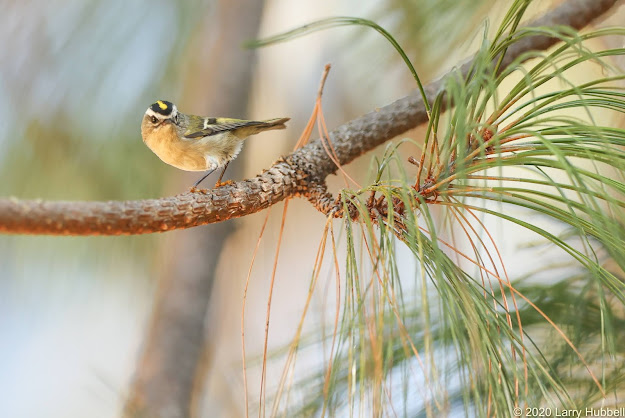 Is this bird young or mature? 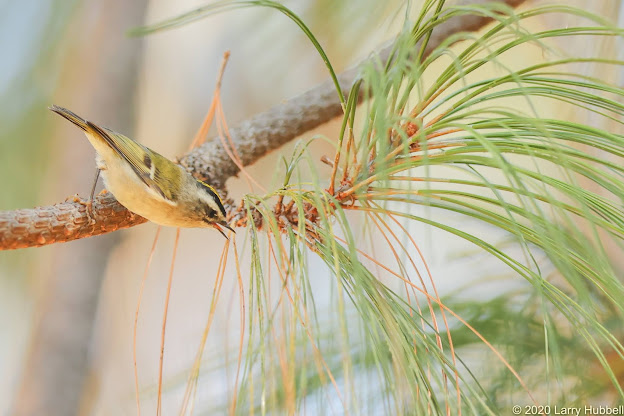 It is mature. The lighter (in this case reddish) color near its gape is its tongue.
Posted by Larry Hubbell at 4:37 PM