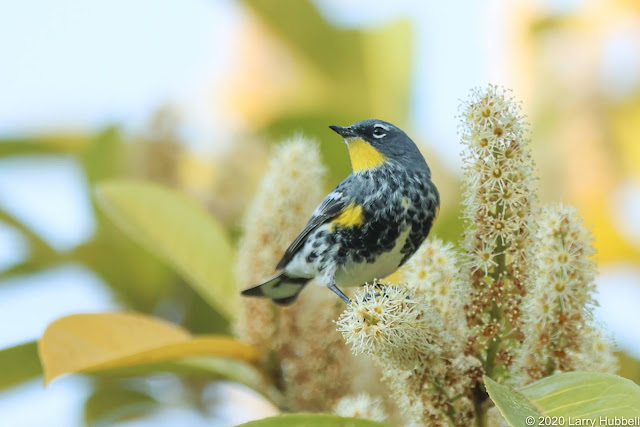 The variety of warblers in the world is wonderful.

There are at least 48 different species that have been observed in the western portion of North America. In addition, there are often gender differences and age differences. Plus, there are occasionally variations by subspecies. I suspect, there may be over a hundred identifiable variations of plumage among the warblers that are at least occasionally seen west of the Mississippi 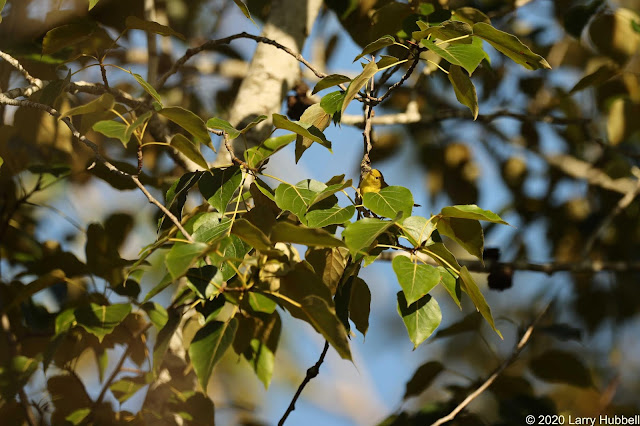 In addition to their variety simply seeing warblers can be challenging. (Binoculars are helpful.) Many warblers are partially yellow and almost disappear in sun-dappled foliage. For example, there is a Yellow Warbler just up and slightly to the right of center in this photo.

Given their small size, their speed, their variety, and their similarities, identifying warbler species can feel overwhelming. However, if we know a few key characteristics and some of their vocalizations distinguishing our local warblers can often be relatively easy and rewarding.

Eighty percent of the species mentioned above are rarely, if ever, seen in our area. Of the remaining eight only two species are here year-round. Among the other six, there are a couple gender variations and one species that is still on my photographic bucket list. I consider them rather challenging to find around Union Bay. 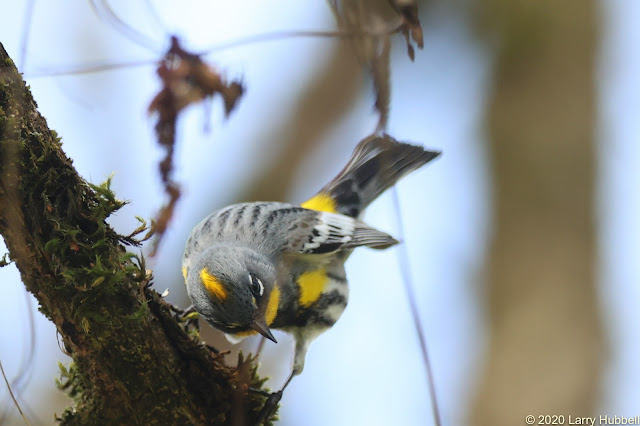 It is unusual to see five yellow spots on a warbler, at least, all at one time. Although, even in this photo the spot on our left, i.e. on the right side of the bird's body, seems more imagined than visible. However, the yellow spot just above the tail is always a great tip for identifying a Yellow-rumped Warbler. 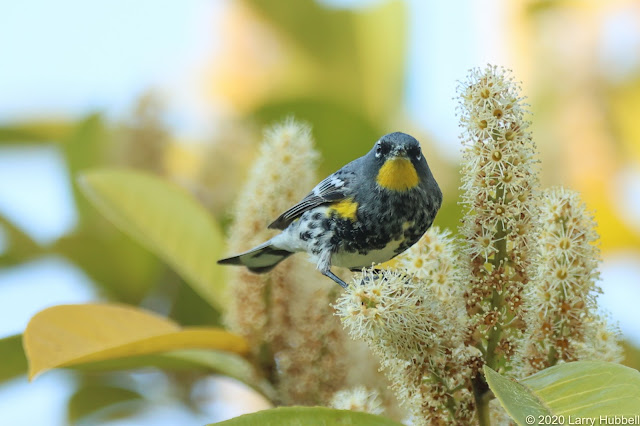 We have two different subspecies of Yellow Rumps in our area. Those with yellow throats are the Audubon's subspecies. Notice that the yellow on the throat does not extend on to the cheek. 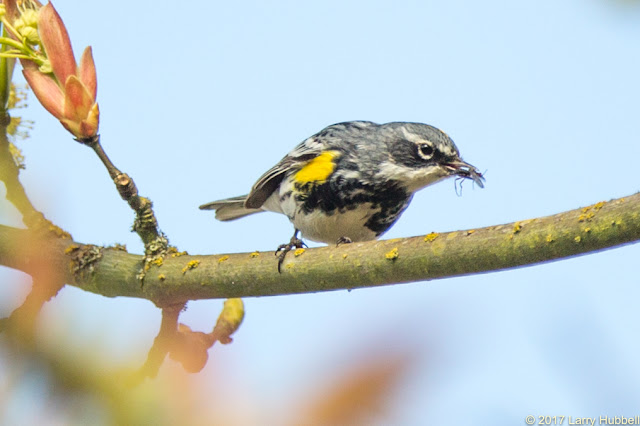 Those with white throats are the Myrtle's subspecies. During the colder months, I often spot these warblers in cottonwood trees. Notice that white on the throat extends back on to the lower cheek. 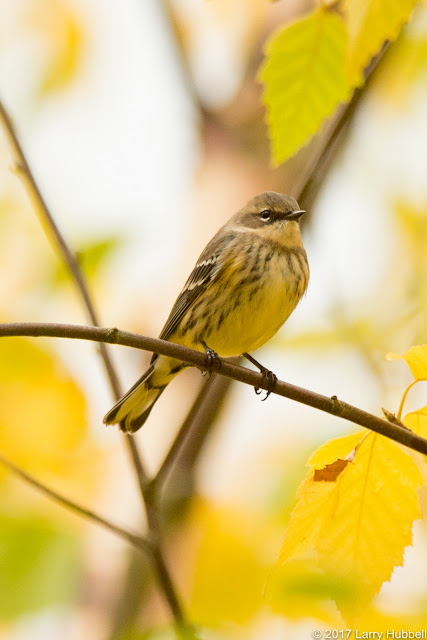 Occasionally, the Myrtle subspecies can appear to have a pale yellowish throat. Regardless of whether the throat is white or yellow if the light color curls back on to the lower cheek we identify it as a Myrtle subspecies. In this photo, I am uncertain how much yellow there actually is on the throat, since the nearby leaves may be reflecting onto the bird.

Click Here to listen to their classical warbling songs. 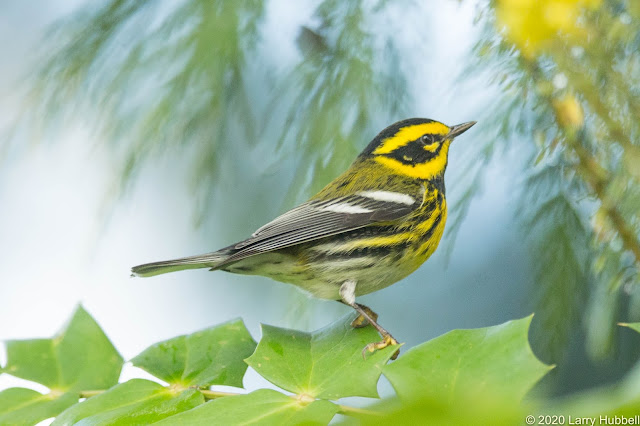 A male Townsend's Warbler has a striking facial pattern which makes it easily identifiable. They can occasionally be seen high overhead wandering in and out of a Western Red Cedar's foliage. One of my neighbors reports having multiple individuals visit their feeders. 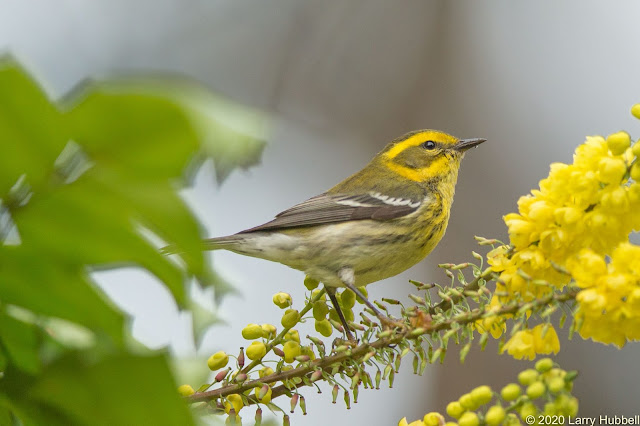 The female, and the young, have similar plumages with less contrast. In December and January I tend to see Townsend's Warblers searching for bugs among the yellow Mahonia blossoms in the Arboretum.

Even though both of these species are here year-round they also migrate through our area. So, they are often easier to find in the Spring when their numbers are temporarily increased by northern breeders. The male Common Yellowthroat is easily identified by its black mask. They are often found in low foliage next to the water. For example, in the lower portion of a cottonwood tree.

This species can winter as far south as Central America. 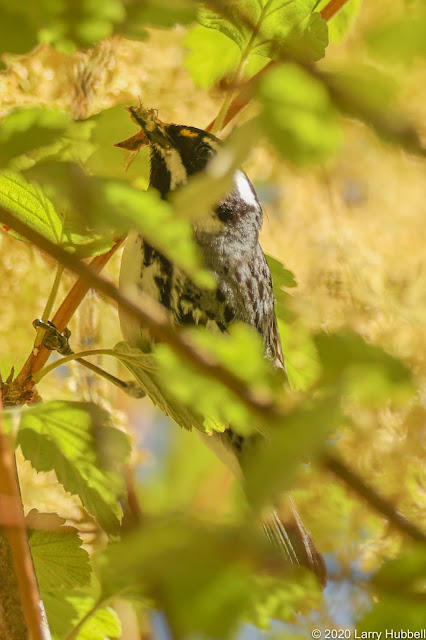 Only the male of this species has a black throat. It looks somewhat similar to a Townsend's Warbler with mostly white on the face instead of yellow. However, both genders of the Black-throated Gray have a distinctive pair of yellow dots between their eyes. 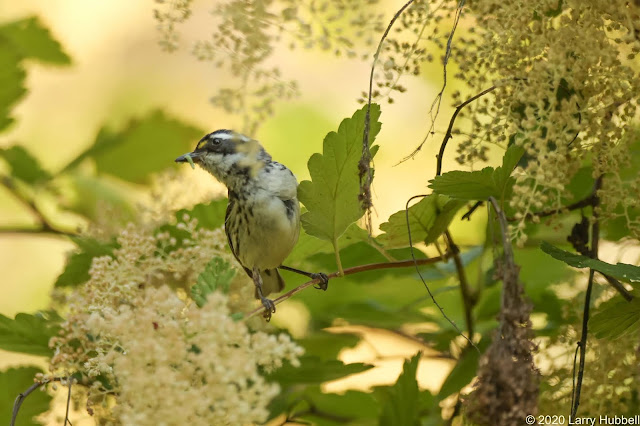 The female has a very similar plumage but with a white throat. In early summer when you see birds carry food, and not immediately eating it, I assume they have young somewhere nearby. These birds were hunting in the Ocean Spray with a flock of Bushtits.

Click Here to hear their buzzy song which sounds somewhat similar to a Townsend's Warbler.

They winter in Mexico. 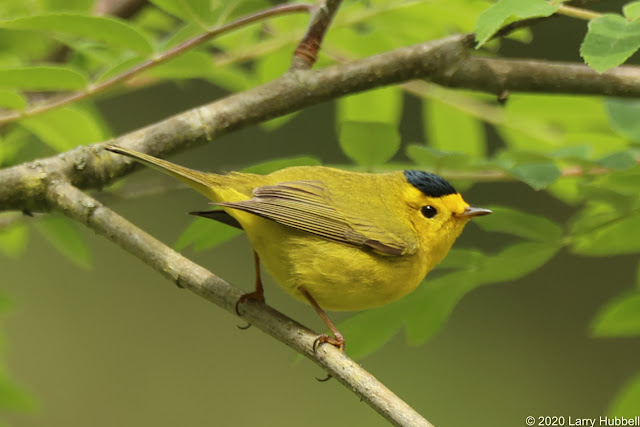 A Wilson's Warbler is most easily identified by its little black cap. They like low bushy foliage. I often find them in Indian Plum and sometimes near moving water. 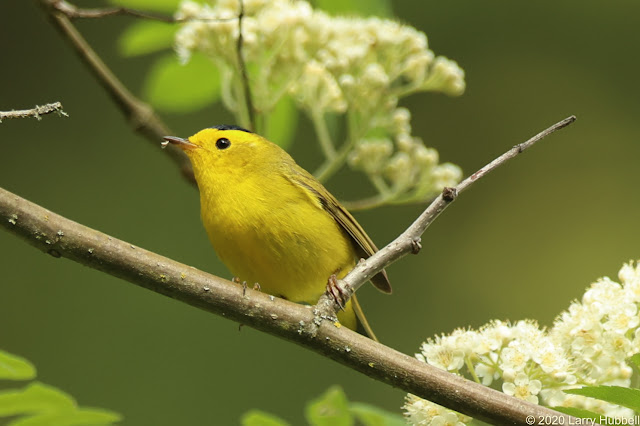 However, if you are looking up at a Wilson's Warbler, the cap can become difficult to see. Since more than one of our local species is primarily yellow this can make them a bit challenging to identify.

Click Here to hear their song which seems to quickly run out of gas.

They winter in Mexico and Central America. 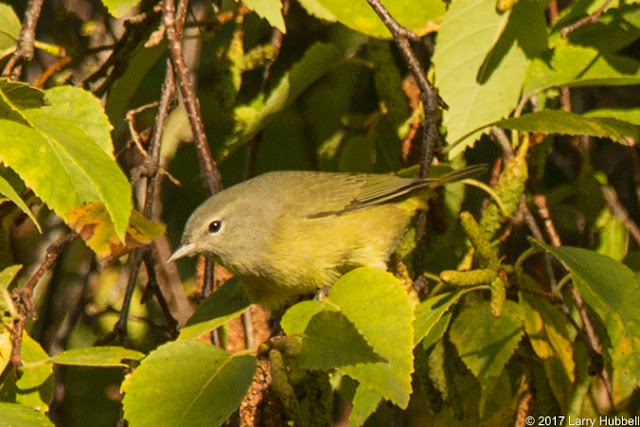 This is one of our more challenging warblers. Its main distinctive features are the faint light eyebrow, slightly dark eye-line, and the broken eye ring. My experience leads me to sometimes wonder if their orange crowns are imaginary. Someday, I hope to see and photograph one of their faint orange patches which they are reported to occasionally reveal.

Photographing the orange crown on this species would be the first of my three bucket list photos.

Click Here to hear their song which sounds a bit cleaner than a Yellow-rumped Warbler.

The Orange-crowned Warblers, which breed along the Pacific Coast, appear to winter in California or Mexico. 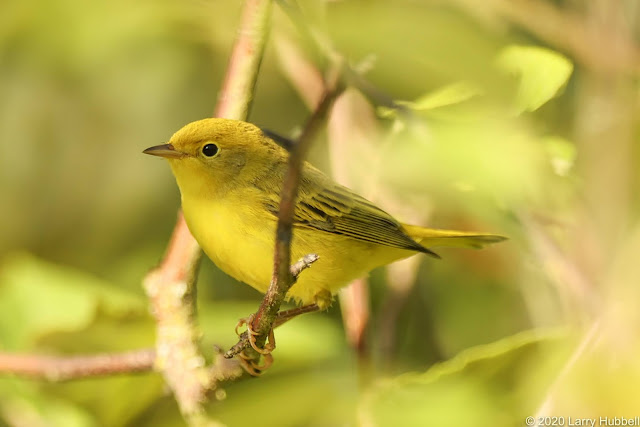 This is a female Yellow Warbler. The male looks the same except for having a series of vertical reddish lines on the chest. Notice that their unbroken eye-rings form complete circles around their eyes.

Photographing a male of this species would be the second of my three bucket list photos.

Click Here to see a photo of a male.

Click Here to hear the song. It is often remembered by the phrase "Sweet, sweet sweet, I'm so Sweet!"

Some members of this species winter in northern South America.

Securing a photo of this species is the third and final photo on my warbler bucket list. Their gray heads or hoods, contrasting with their yellow bodies, should make them ease to identify..

Click Here to see the All About Birds photos and hear their song.

They migrate south to primarily Mexico. All About Birds also displays a migratory question mark in Central America. 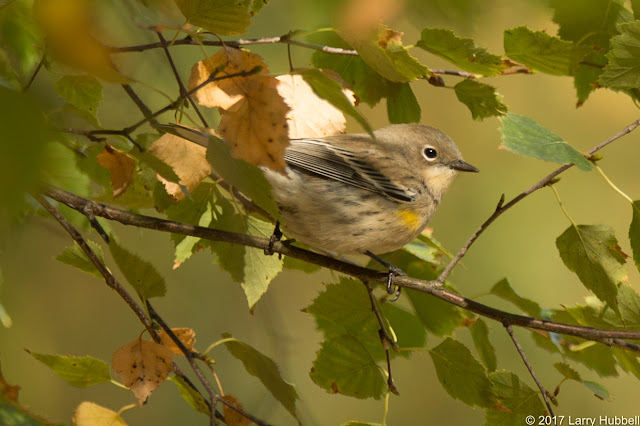 I believe this is a young Yellow-rumped Warbler. What I cannot positively determine is whether the throat will eventually turn yellow, making it an Audubon subspecies or whether the white on the throat actually extends further back on the face making it a Myrtle's subspecies. The more extensive eye-ring makes me lean toward it being a Myrtle's. 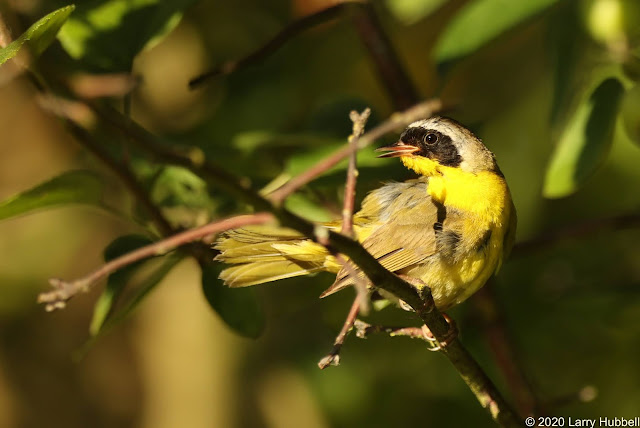 This is a young, first-year, male, Common Yellowthroat, which I stumbled across this week. The lightly-colored gape, contrasting nicely with the black mask, is clear evidence of the bird's youth. 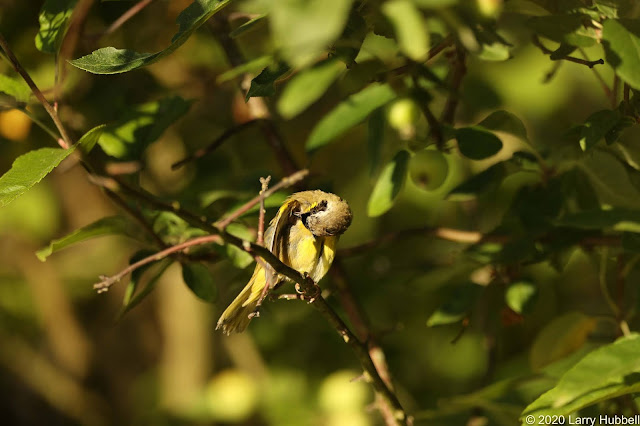 Its extensive interest in preening seemed to reinforce the idea that it was still in the process of growing its first adult plumage. 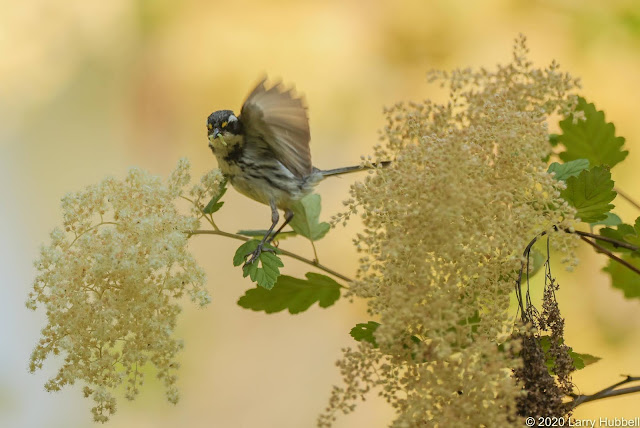 Here is one more shot of the female Black-throated Gray Warbler spotted a couple of weeks ago in the Arboretum. If you enlarge the photo you can clearly see the two yellow dots between the eyes. I returned the next morning to the same area but did not see any further signs of them. 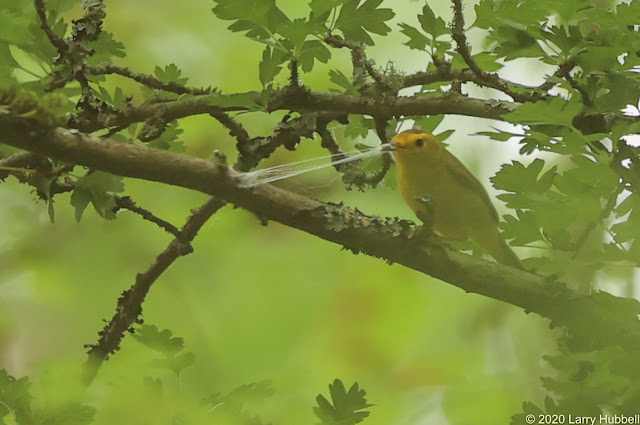 A month or so earlier I caught this big bully of a Wilson's Warbler, apparently, preparing to eat a spider's lunch - if not the spider.

Have a great day on Union Bay...where Black Birders are always welcome! 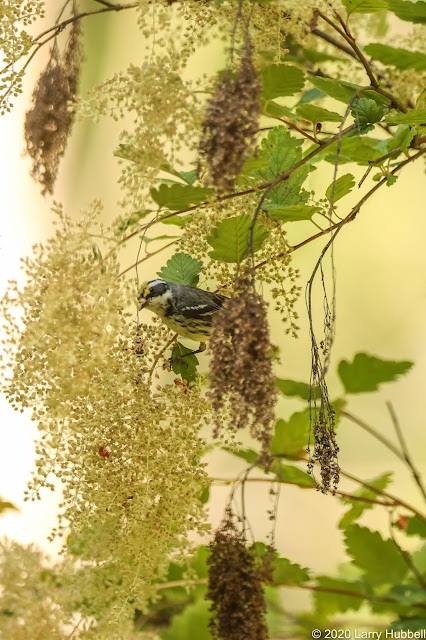 What species of plant and warbler are these? Are they native to Western Washington? 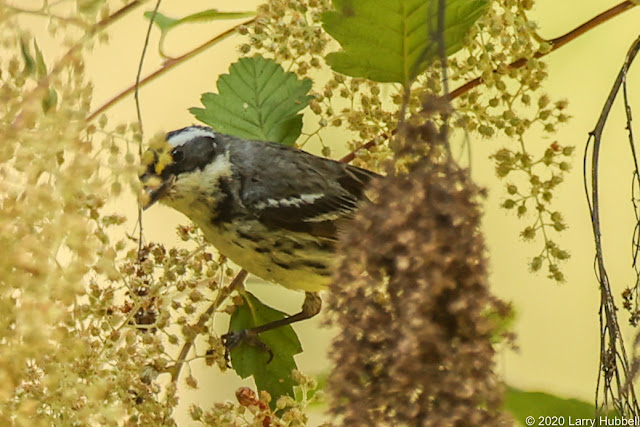 Black-throated Gray Warbler: Due to the white throat we can assume it is a female. 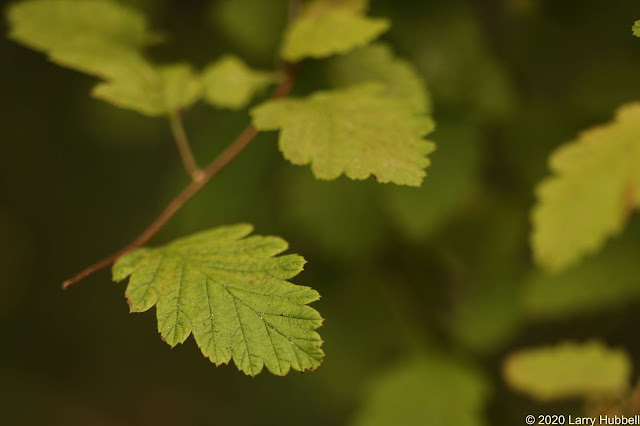 Ocean Spray: The leaves have three or four fully-formed lobes closer to the branch and smaller partially-formed lobes towards the tip of the leaf. The outer veins are asymmetrically aligned along the central vein.

Here is one more warbler photo for those who read to the end. 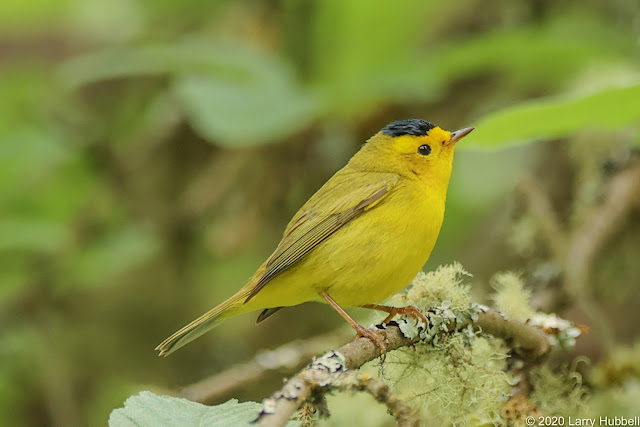 Posted by Larry Hubbell at 2:03 PM