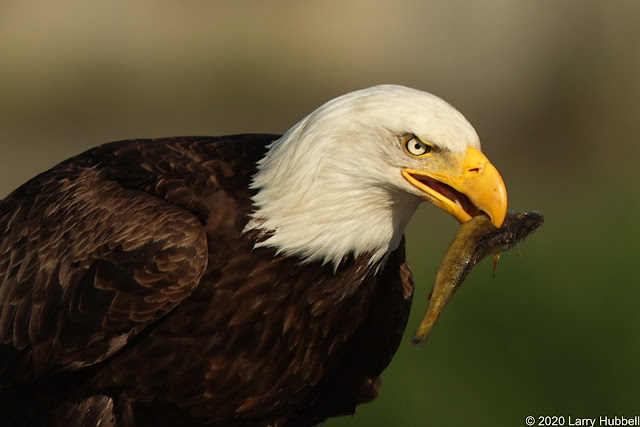 Marsha with a fresh fish. Notice how her eyebrow obscures the upper portion of her iris.

On Wednesday morning, not long after dawn, I was directly offshore from the University of Washington Waterfront Activities Center (WAC). My kayak was bobbing gently as I glanced at the tops of the cedars just north of the WAC. I was looking for one the adult Bald Eagles, either Monty or Marsha, from our local Montlake Cut pair. 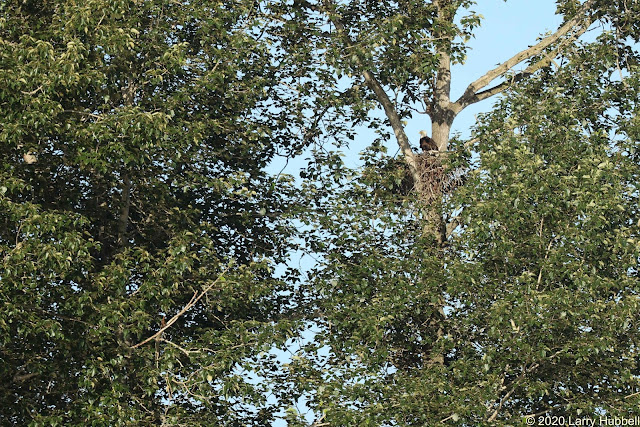 Moments earlier, I checked out their nest high above The Cut. One of the two was visible in the nest. In spite of the help from my camera, I could not tell which one. It made sense to search for the other eagle in the trees north of the WAC, since that is their favorite hunting roost. 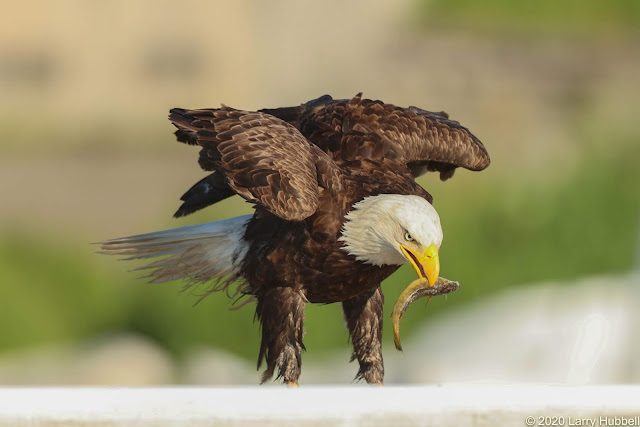 Suddenly, there was a flurry of dark wings and a Bald Eagle was heading directly at me. If I was a duck, I would have dived. Technically, I am sure I wasn't in danger but that was not the way it felt. I grabbed at my camera and fumbled with the focus. With every wing beat the eagle was getting larger. Neither I nor the camera was capable of focusing with the speed required. I felt quite lucky when Marsha landed on the off-shore dock directly in front of me.

Mentally, I struggled to comprehend what had just happened. In retrospect, as Marsha flew straight at me she descended to the surface of the water and apparently she reached down and grabbed a fish. The offshore dock, between us, obscured my view which explains how I totally missed the moment. The wet feathers on her legs and the fresh fish in her mouth provide obvious evidence to support this theory. Most likely, she rapidly transferred the fish to her mouth so she could land on her feet. 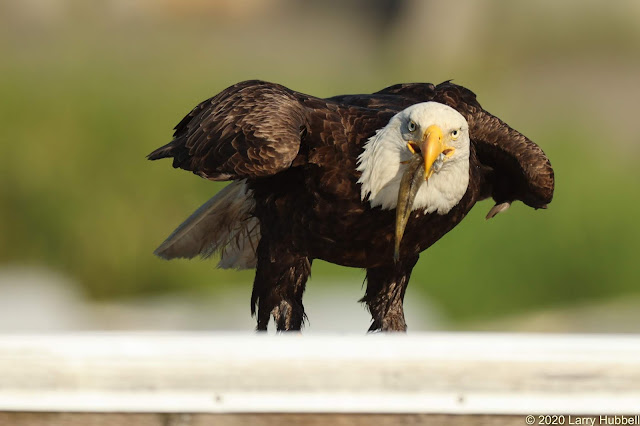 This is not the first time I have seen her carry a fish in her mouth, but so far she is the only Bald Eagle I have ever seen do it in flight. In my experience, most Bald Eagles carry fish with their talons.

Marsha had obviously been focused on catching the fish and coming face to face with me may have been somewhat of a surprise. She quickly took to the air and headed north, just above the water. 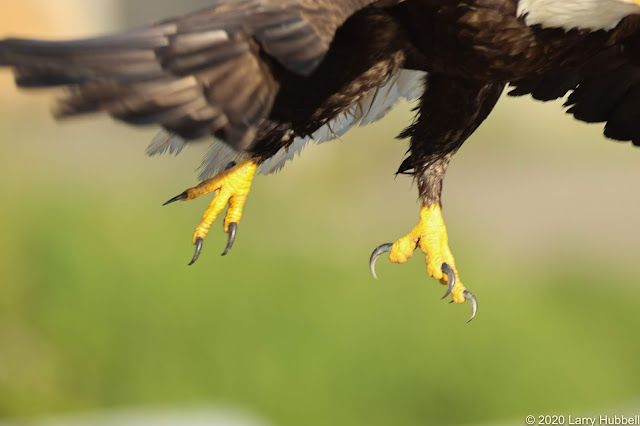 As she lifted off I got a fairly good look at her talons. Based on eagle talons I have handled in museums, hers are probably at least an inch and a half long, exceedingly sharp, hard and durable. I suspect the curvature helps eagles to close their talons into a ball shape, which is much safer when moving eggs in a nest. 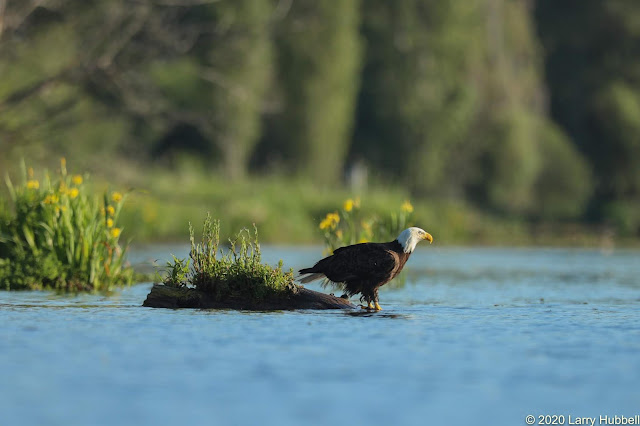 Marsha flew a short distance and landed next to this log or islet. I missed where she placed the fish, but she did not have time to eat it. 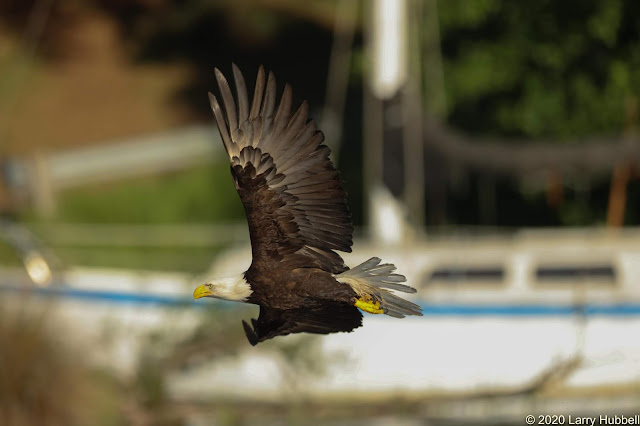 A moment later, she took to the air again. This time she flew back towards her favorite hunting perch. There was no fish in her mouth or talons. 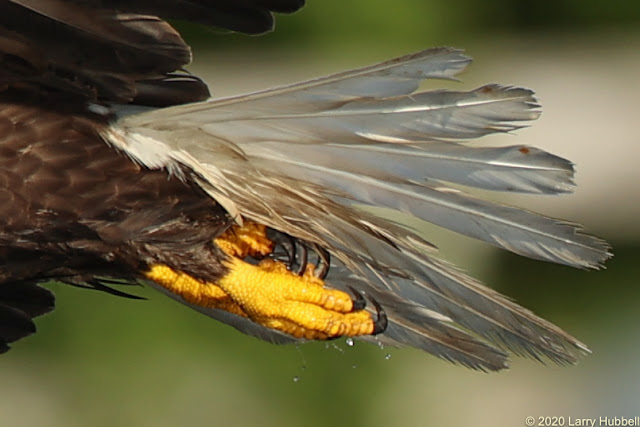 Another closeup of her talons helps prove they were empty. 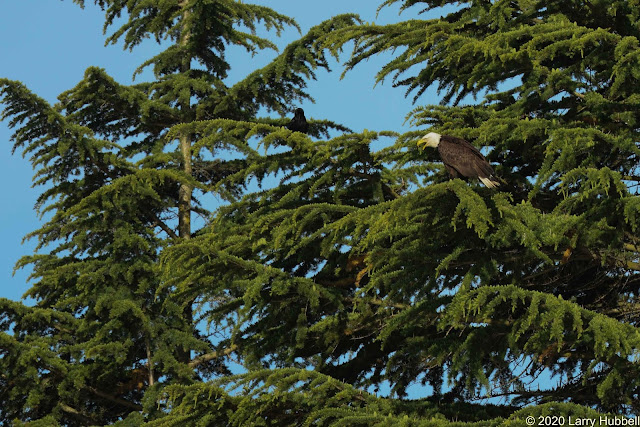 After she landed back in the cedars, she threw up her head and then called out - apparently to Monty. 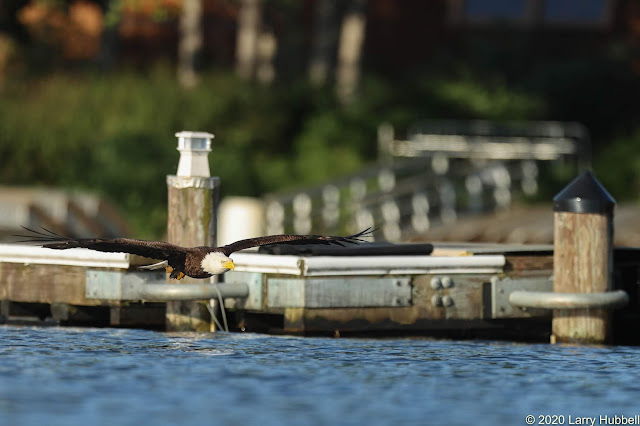 Within moments, Monty was coming in low from the direction of the nest. From my location I could not see Monty's initial response, but apparently when Marsha called, he dove out of the nest and then headed north just above the water's surface.

The mental image of his descent from the nest reminded me of an incident two weeks earlier. In mid-May, I was on the south side of The Cut attempting to document the growth of their newest eaglet, when Marsha left the nest tree and swooped down to the water. 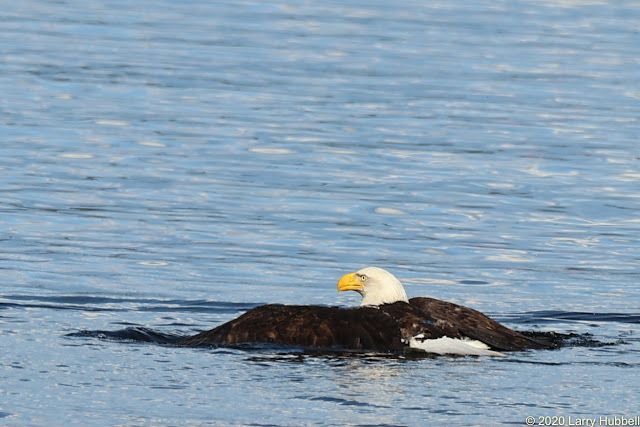 She did not execute the classical Bald Eagle catch off the surface. Instead, Marsha ended up in the drink. 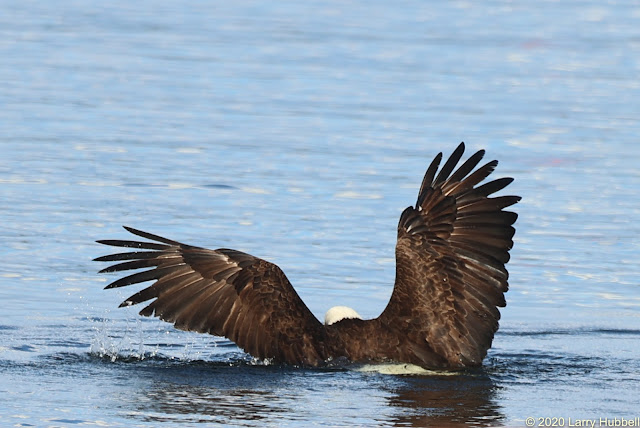 Once an eagle's feathers are waterlogged it must become difficult for them to get airborne. Ospreys produce an oil to help their feathers resist water, apparently, eagles do not. 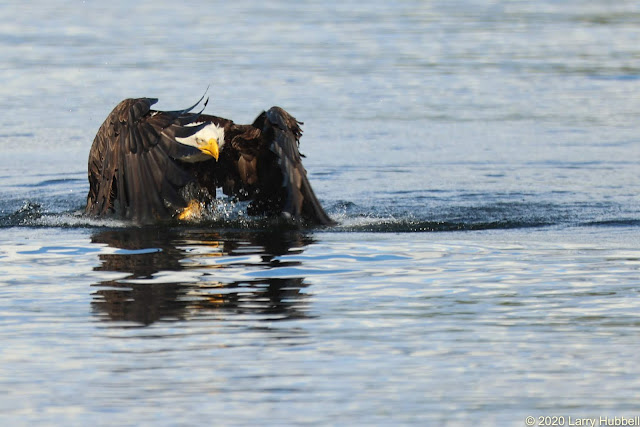 Marsha turned, struggled, and fought her way through the water. 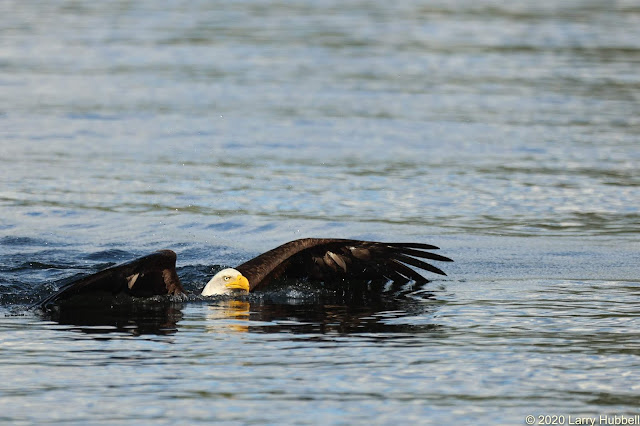 She repeated these strokes dozens of times as she slowly 'rowed' her way to safety. 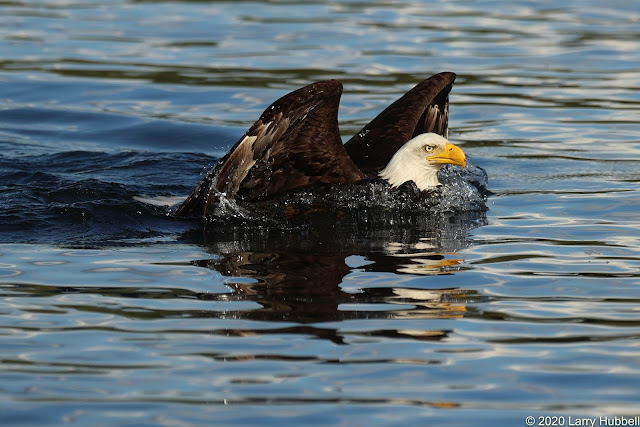 Finally, she reached shallow water where she was able to scramble out onto the shore and shed the weight of the water. After a few minutes, she flew back to the nest. 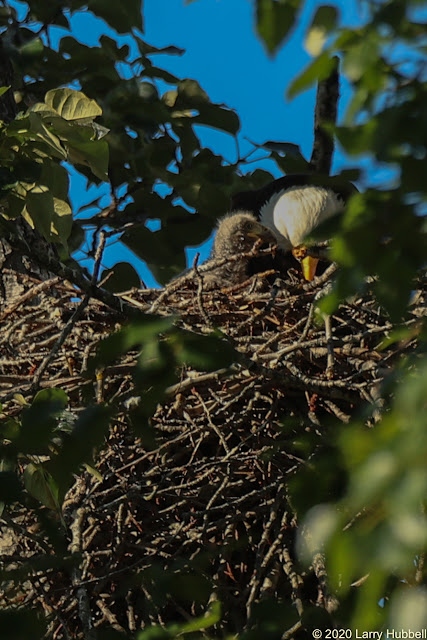 I never got a clear view of what she caught. I suspect it was a fish. She must have carried it in her talons with it hidden beneath her tail. When she reached the nest, she began feeding the young eaglet. At this point, I am guessing the eaglet was about one month old. 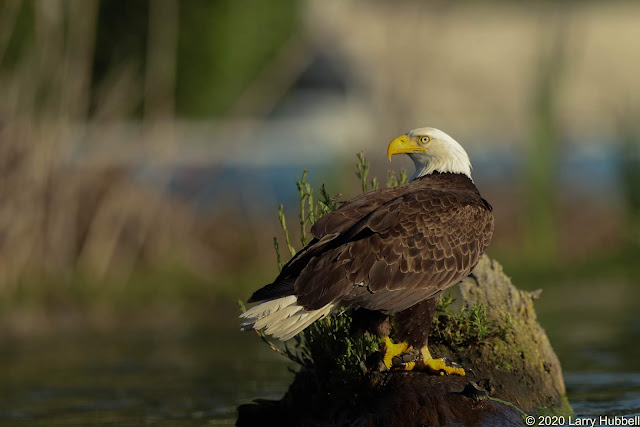 On Wednesday, Monty continued north. Surprisingly, he went directly to the same small island where Marsha had been. Notice how his 'eyebrow' usually does not cover his iris. 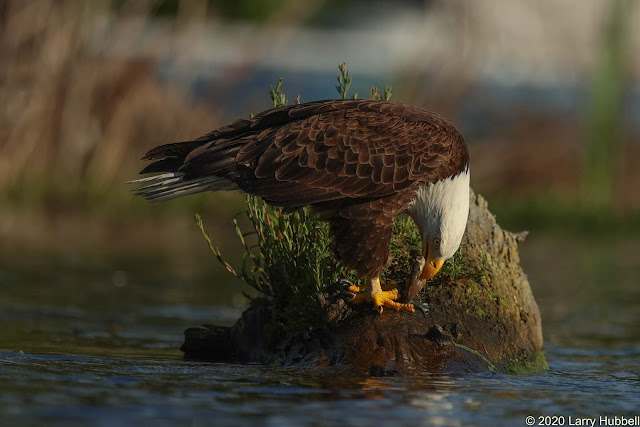 Once there he immediately began eating a fish. Again, I began to question what I had just seen. The following options came to mind. 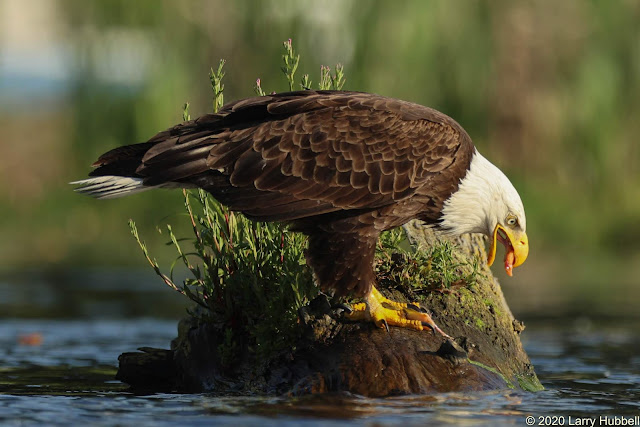 A) Marsha left the fish for Monty, at a location out of his sight. Then called and told him where to find it. B) Marsha left the fish for Monty, at a location out of his sight. Then called and told him to look for food. Even though he was probably a quarter mile away and close to the water's surface he saw the fish and headed directly toward it. 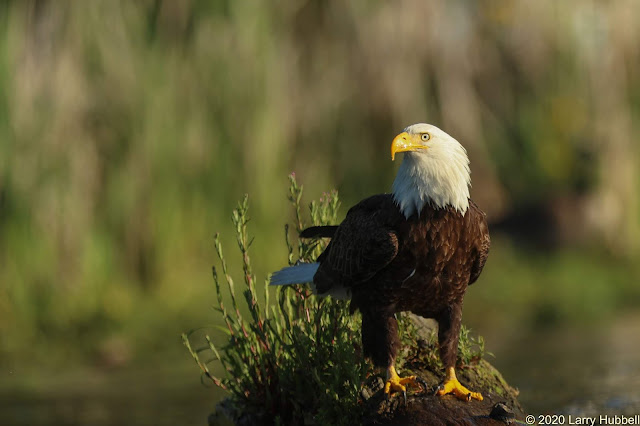 C) Monty left the nest earlier than I observed. He saw Marsha leave the fish behind from a considerable distance and immediately descend to the water's surface, flew to the spot and ate the fish. Clearly, Option C seems like the most logical scenario. However, on site and in the moment it certainly felt like they executed Option A.

In any case, I think we can all agree Bald Eagles have some amazing talents.

I suspect there is some level of special communication and understanding between mated pairs. Given that we are talking about intelligent creatures, who spend potentially decades together, a lack of communication would be the more surprising outcome.

However, even if the communication in this situation was minimal then it reinforces that an eagle's eyesight is phenomenal. The National Eagle Center says, 'An eagle can see something the size of a rabbit running at three miles away.'

Note: From Husky Stadium, looking directly east, the beautiful homes on Webster Point are only one mile away. Imagine being able to a see rabbit at three times that distance. 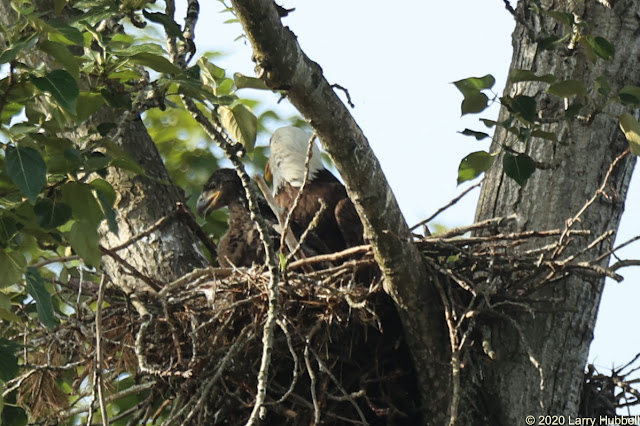 After approximately six weeks it seems obvious that Monty and Marsha have only one offspring this year. Their young eagle is beginning to look more like a juvenile than an eaglet.

Given that Monty and Marsha had two young in both 2018 and 2019 this is their fifth offspring. In recognition of the Native Americans, who shared this bay with eagles for hundreds of years, it seems appropriate to call this new eagle by the Lushootseed word for five.

Sadly, I can only approximate the sound of the word with English letters. With the utmost respect for the complexity of the language and the culture, the best I have been able to do is, 'Tsuloss'.

Clicking Here will enable you to find the word for five and the link to the pronunciation guide, which I attempted to use. I would be very happy to receive corrections or improvements from anyone with greater knowledge or understanding of the language.

Have a great day on Union Bay...where nature still lives in the city! 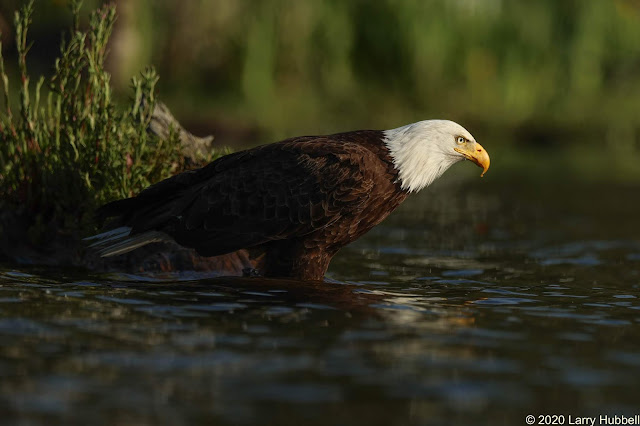 Based on what you have seen and read, Is this Monty or Marsha? The answer can be found at the end of this post. 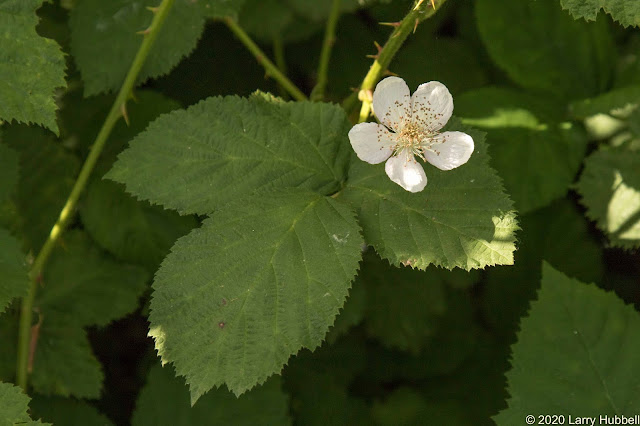 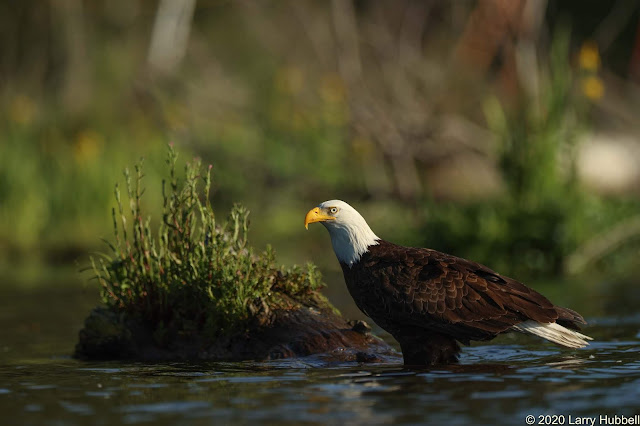 This is Monty. If you can consistently see the full iris, and you are looking at an eagle from the pair that 'owns' Montlake, then you are most likely looking at Monty. Also, the white feathers on his head generally look brighter than Marsha's, to me.

Posted by Larry Hubbell at 2:40 PM