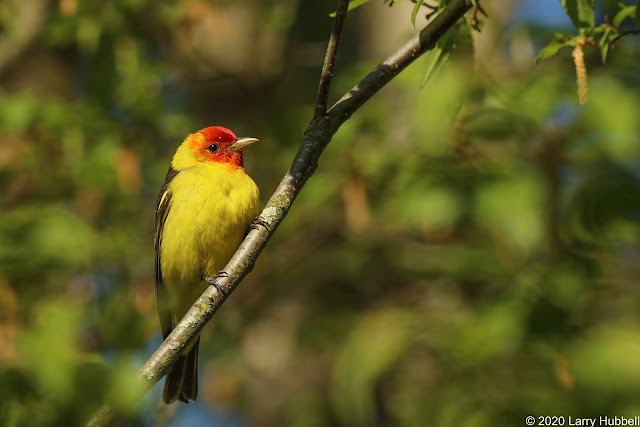 A clear view of a male Western Tanager is startling. You can be forgiven for thinking that a Tanager is an exotic bird with a misguided sense of direction. They do winter in places like Costa Rica, Honduras, El Salvador, Guatemala, and Mexico. However, in the Spring, they follow their ancient impulses and head north. Their migratory path covers both sides of the Rocky Mountains and all the way west to the coast. All of their breeding and reproduction happens in the western portion of North America. So, maybe we should say, they are native birds with a taste for exotic winter vacations.

All About Birds quotes Partners In Flight who estimate the Western Tanager population around eleven million. Even if only one percent pass near Seattle that would still be over one hundred thousand birds. 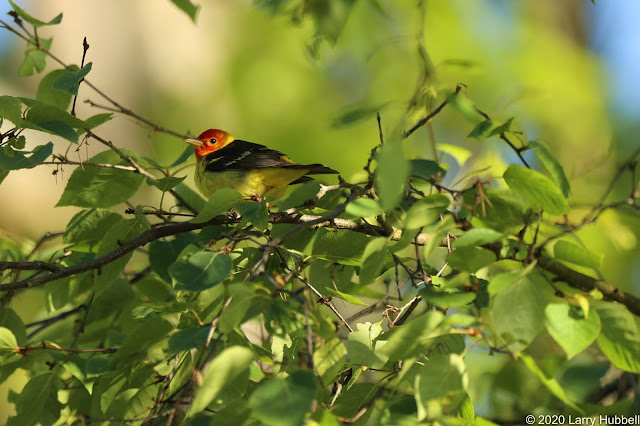 Why don't we see more of them? For one thing, they often migrate at night which is no doubt their safest way to travel. Thousands of bright yellow birds with redheads migrating during the day would be an amazing sight, but I suspect they might be easy targets for predatory birds. 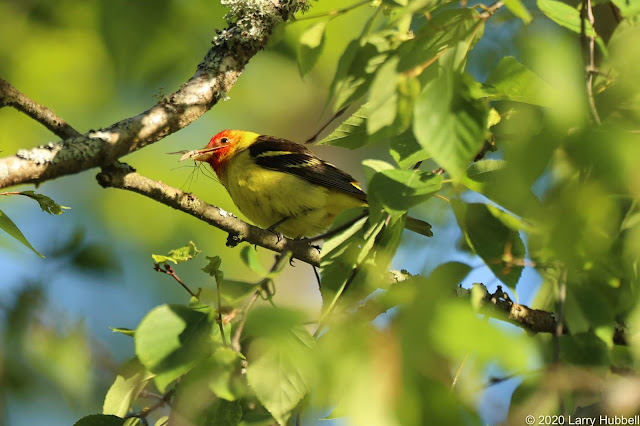 During Spring their dietary focus is on eating insects. They do most of their hunting in the treetops, which is another reason we seldom notice them. Also, their yellow color actually blends surprisingly well with the fresh sunlit leaves of Spring.

I suspect that this was a crane fly. (Chemicals that get rid of insects in our yards and trees  are effectively stealing food from the birds and poisoning the ecosystem.) 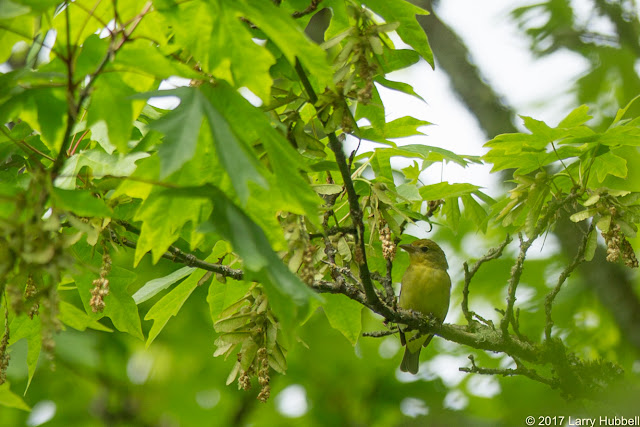 Plus, roughly half are female. Unlike the males, they do not have brightly colored faces. 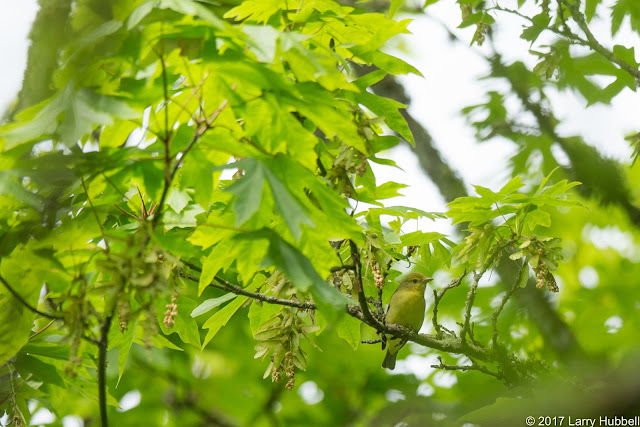 Their greenish-yellow color could be considered nearly perfect camouflage, especially, when perched among the winged seeds hanging in a Big Leaf Maple tree. Tanagers often perch for a moment while they check out their surroundings for insects. 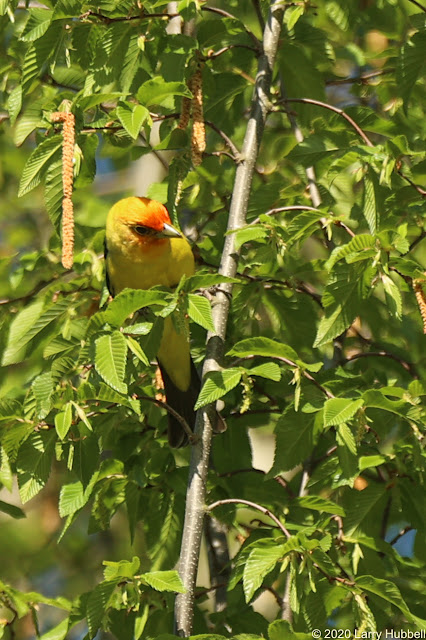 Birdweb says, that during their first-year male Western Tanagers tend to have less red on their faces. Tanagers are thought to get their red coloring from the food they eat. Apparently, the amount of red varies due to diet and, evidently, accumulates over time. Having less red probably makes them less appealing to females. It certainly makes them a bit less conspicuous to us.

I have not found any documented link to a known food source that supplies the red coloring. There are suggestions that they might get the coloring from insects. However, there is no mention of which species. It is amazing how much we still have to learn about the creatures around us. 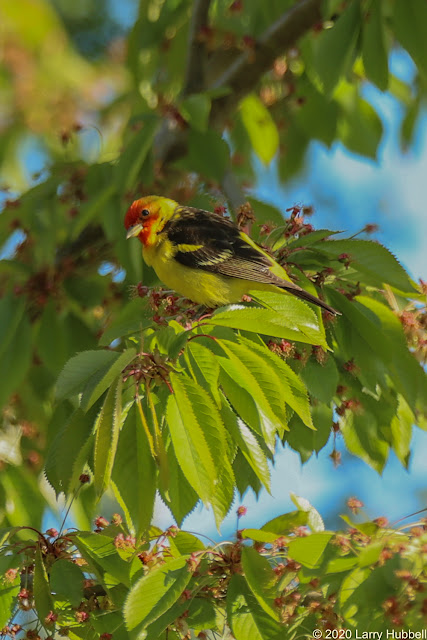 There is one more important reason we do not see as many tanagers as we might expect. For many of them, Seattle is more like a truck stop than a destination. They are simply refueling before heading further north to nest. Click Here to see their North American breeding territory on All About Birds.

Although they can nest high in the mountains, some do nest in nearby rural areas. My friend, Dan Pedersen, has had a pair nesting near his home on Whidbey Island for several years. 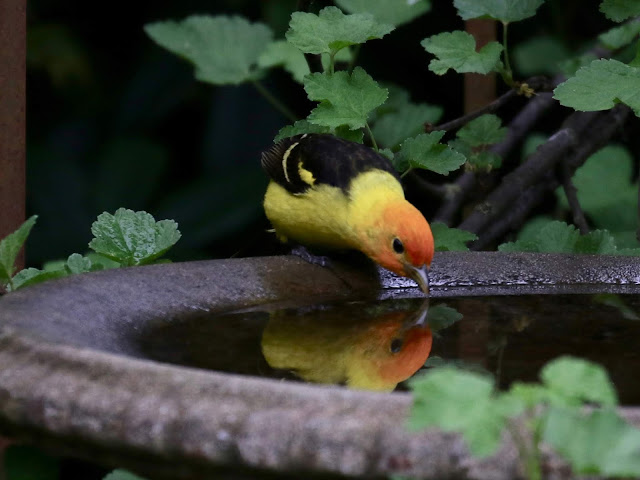 The earliest arrival, I have heard about this year, was at this birdbath belonging to my friends, Anne and Rick. (I truly love this great photo taken by Rick.) This Western Tanager arrived on April 26th and was joined by a female about a week later. 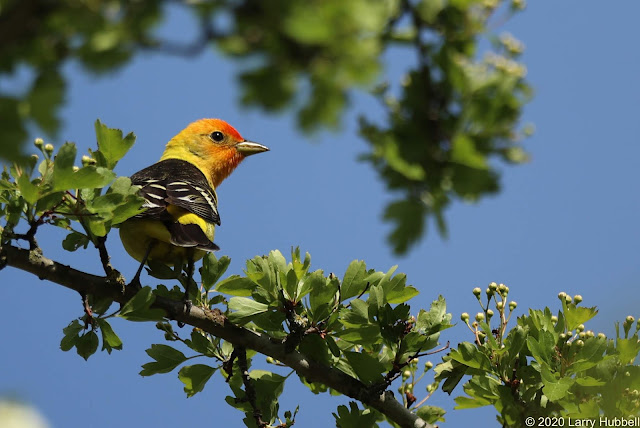 This year, my first sighting of a Western Tanager was on May 1st, about two hours later than last year. I have read reports from friends all over the city who suddenly noticed Western Tanagers on the same morning. May is most certainly the month to break out your binoculars and search the treetops for Western Tanagers. 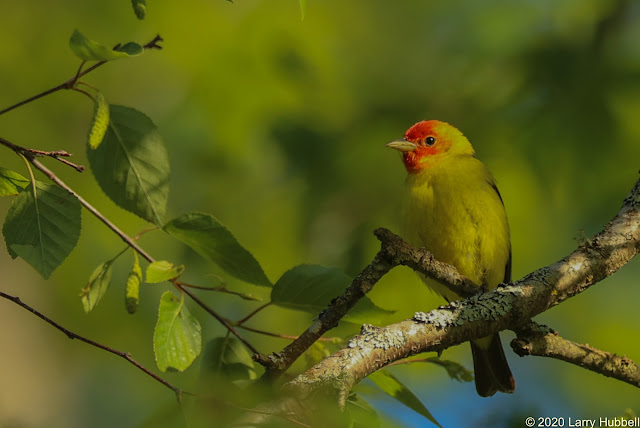 The next few days were a bit cooler and I didn't see any more until suddenly on May 4th, which was a nice sunny morning. I stood for hours taking these photos and enjoying the rush of exotic colors. 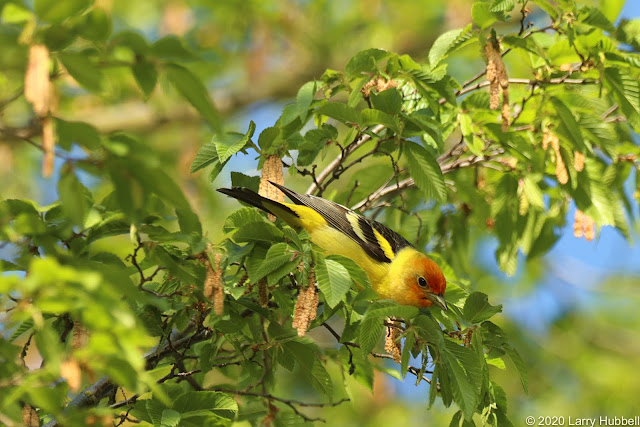 A curious bit of information I just learned on Seattle Audubon's Birdweb is about the gender-based difference in their wing bars. Males have a bright yellow wing bar above and a pale bar below. Isn't funny how we can look at a bird or a photo and not notice something perfectly obvious until it is brought to our attention. 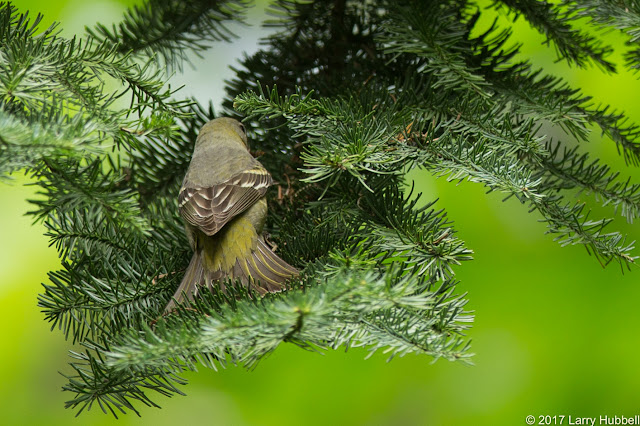 Females have two pale wing bars. They are often white or may contain a very slight yellow hue. 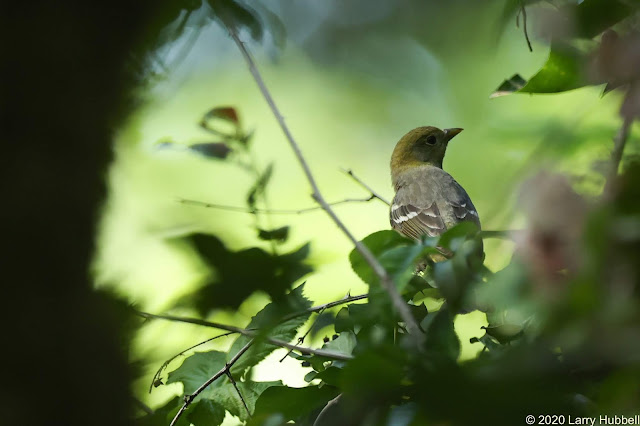 Another interesting point on Birdweb was the discussion of the Tanager's bill size. It is heavier than the bills of birds that specialize in insects, while lighter than the bills of birds who eat primarily seeds. In the winter, Western Tanagers are said to eat fewer insects and more fruit. Apparently, their mid-sized bills are a compromise that enables a more varied diet.

I also find the shape of their bills helps identify the female Tanagers. Most other primarily yellow-green birds, that I see, have noticeably smaller bills. 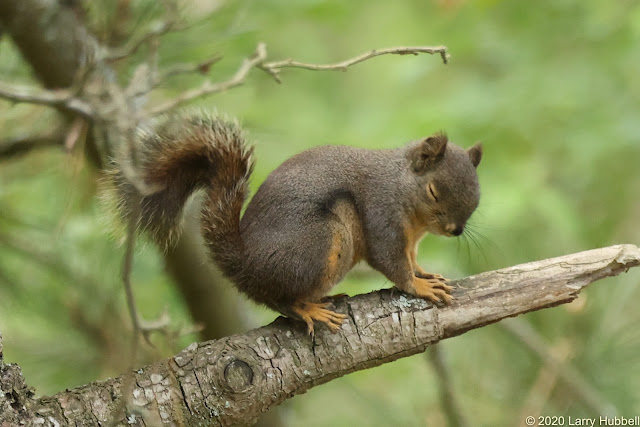 Douglas Squirrel: The Douglas Squirrel is native to our area. However, this is the first one I have ever photographed in our Union Bay neighborhood. My friend Kathy mentioned seeing one a few months ago but it has taken time to find it and get a photo. I have spoken to neighbors who say they remember seeing them decades ago. It is wonderful to have at least one returning to our area. By the way, they love pine trees, which is where I found this one. 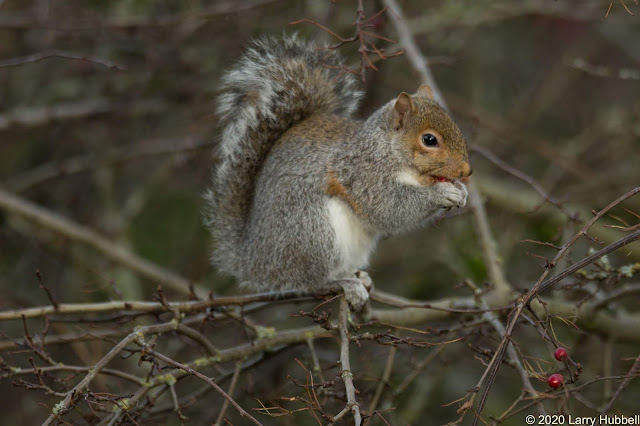 Eastern Gray Squirrels are now our most common squirrel seen around Union Bay. They were introduced from the eastern portion of North America. A few easily noticed differences include primarily gray versus more of a brownish-gray, white bellies versus yellowish-orange, and the lack of ear-tufts on the Eastern Gray Squirrel. Mature Eastern Grays are also larger plus their tails are bigger, fluffier and lighter. 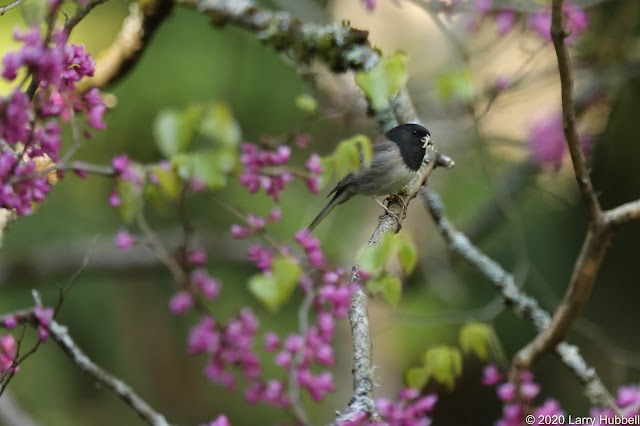 This photo is a little reward for those who have read all the way to the end. I watched while this male Dark-eyed Junco took these little inchworms to the nest. The nest was on the ground hidden under Creeping Yellow Buttercup. (This time of year off-leash pets can easily sniff out the Junco nests and quickly consume their young.)