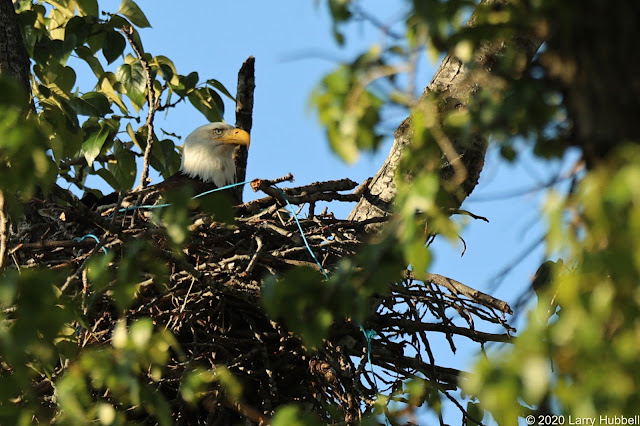 Marsha in her newly refurbished nest above Montlake Cut.

By mid-April, Monty and Marsha's behavior around the nest was beginning to change. 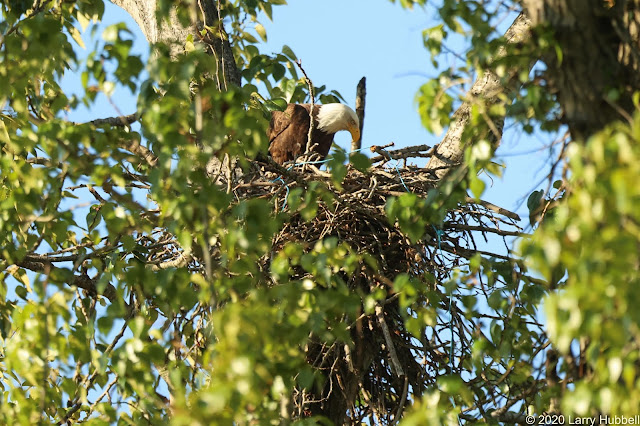 Tyler, a Union Bay Watch reader, sent an excited email on April 20th. He was nearly certain he could see the eagle's behaving as if their eggs had hatched. The situation was a stark contrast to earlier in the month - in more ways than one. 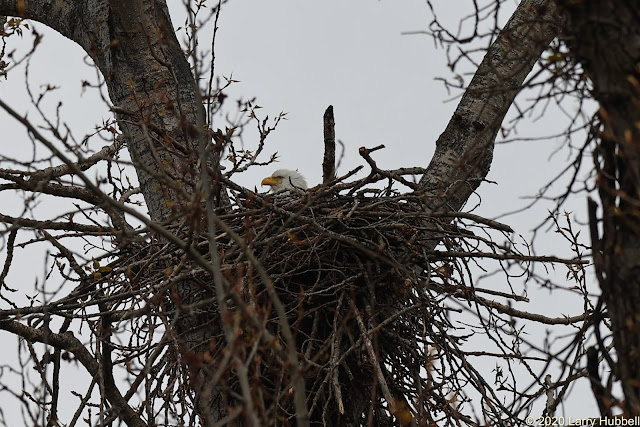 On April 3rd, the eagle's were still taking turns sitting low in the nest, apparently, incubating eggs. While Monty was searching the cold gray skies for any signs of danger, he may have also been wondering when Marsha would return and take the next shift. 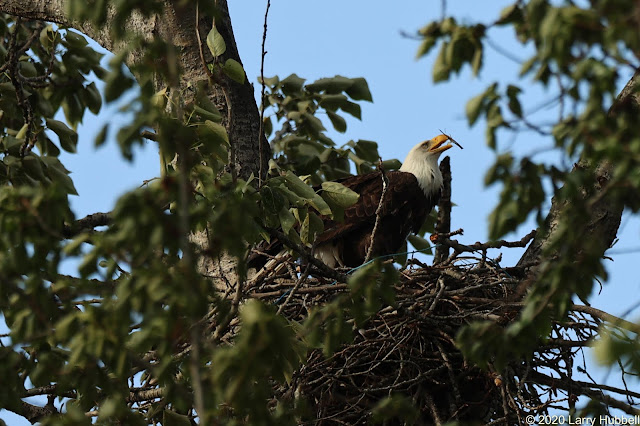 By mid-April, the green leaves, the blue skies, and the eagle's evolving interest in the nesting process were all encouraging signs of spring.

One obvious behavior change was when the adults start bringing food to the nest. Even though the eaglet(s) were too small to be seen from the ground the adult's new behavior was fairly obvious. Prior to nesting season, the adults often eat on reasonably-sized, horizontal portions of nearby branches. Once they start feeding young, the adults will often finish the leftovers while still in the nest. Later, as the eaglets grow, the leftovers shrink, the inept young birds may become a bit dangerous. The adults revert to eating elsewhere.

During what looked like a feeding session in the nest, Marsha got something temporarily stuck on the tip of her bill. It may have been a twig from the nest or some inedible portion of the meal. 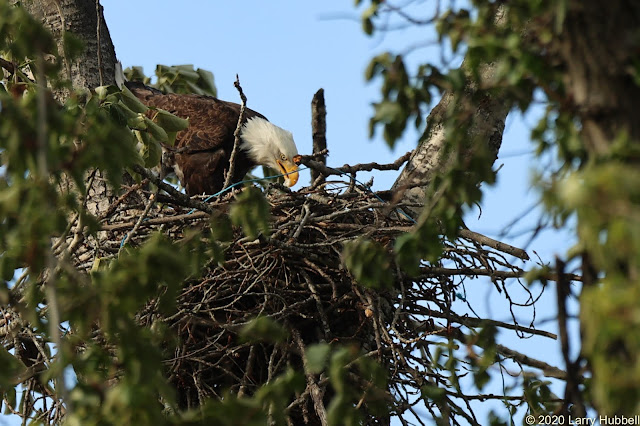 In either case, it looked a lot like she was feeding an eaglet.

Our big questions for this year are: 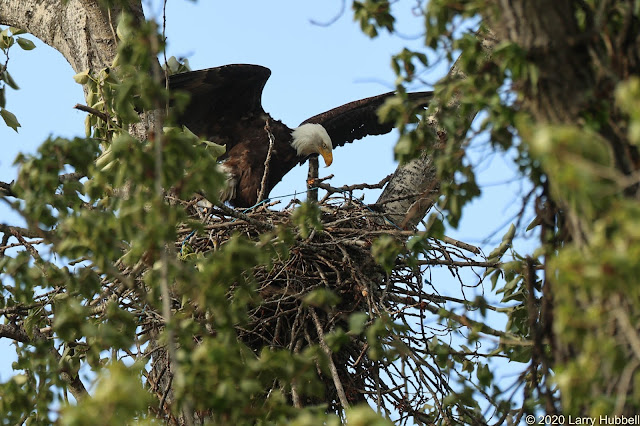 This is Monty and Marsha's third year nesting above Montlake Cut. They are in the first tree south of the totem pole. If you want to see them be sure to bring binoculars. Due to the angle of the nest and the proliferation of cottonwood leaves, the best viewing may actually be from the north side of Montlake Cut.

In 2018, a branch broke, the nest fell and both young ended up on the ground and unable to fly. With help from the Progressive Animal Welfare Society (PAWS) and others, both young survived and were released to the wild.

In 2019, one of their two young fell from the tree, he was uninjured and, again with help from PAWS, he was reunited with the adults. So far, often with help, all of their young have survived long enough to learn to fly. 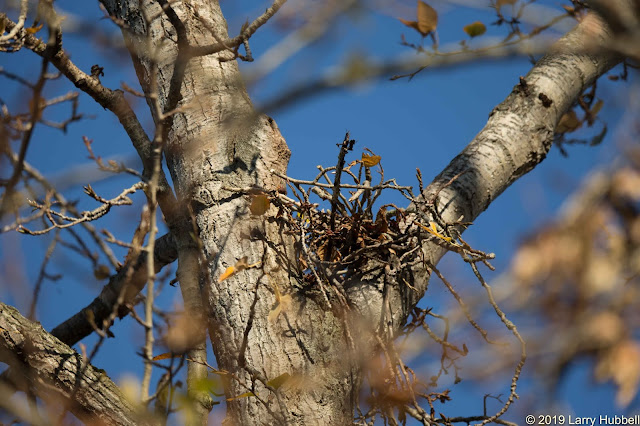 After considerable use (for flight practice, landing pad, and dinner table) the remnant of the 2019 nest could have been easily mistaken for the work of a crow. This photo was taken in November of last year, around the time the adults began their reconstruction. 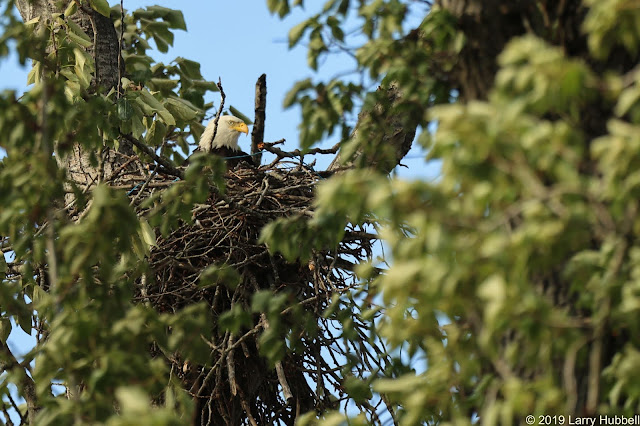 By April, after an extensive effort, the nest was many times larger, hopefully, much sturdier and, hopefully, holding a full set of eggs. 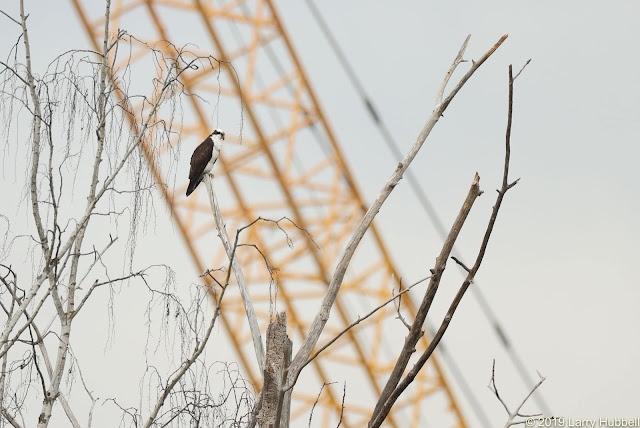 Last Sunday, on my way over to check for eaglets, I noticed an osprey searching for fish in Kingfisher Cove. The cove is a shallow bay, south of 520, and just southeast of the eagle's nest. The cove is completely enclosed by the WSDOT 520 bridge construction and staging areas. 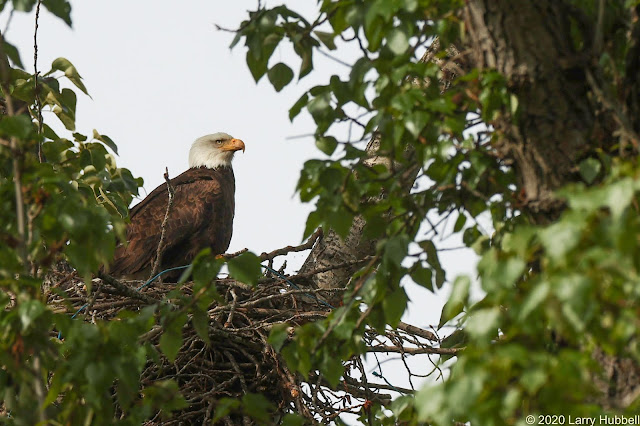 A short time after I arrived at the eagle's nest, Marsha spotted the osprey. Apparently, she felt the osprey was a threat. I do not know why. Ospreys normally eat only fish. I have never heard of them being a threat to an eagle nest. Although, I suppose Marsha might have simply wanted to protect the supply of fish in their territory. Monty and Marsha's territory normally includes Kingfisher Cove, Marsh Island, the southwest portion of Union Bay, Montlake Cut, and Portage Bay.

Quickly, she left the nest and headed directly towards the osprey. The smaller bird began circling up higher and higher into the sky. Marsha circled below, slowly gaining altitude while driving the osprey ever upward. 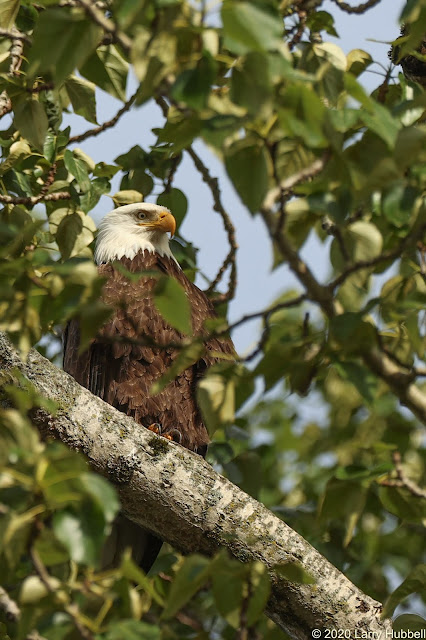 Monty was sitting just a few feet above the nest and peering intently into it. 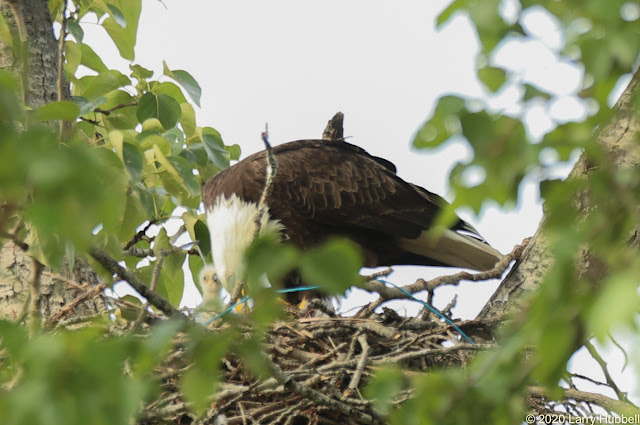 After a time, he jumped down to the nest and began removing morsels from the remains of a previous meal. That was when I first saw the small fuzzy head of a young eaglet just to his left. 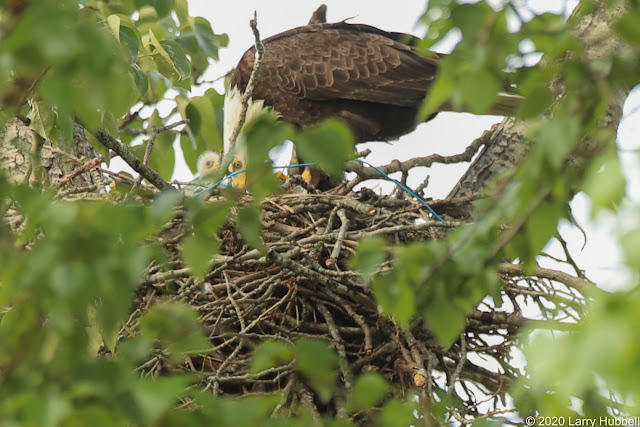 If the eaglet hatched out in mid-to-late April, I am guessing it will fledge sometime in the first half of July. Independence Day would certainly be a fitting time to begin to fly. 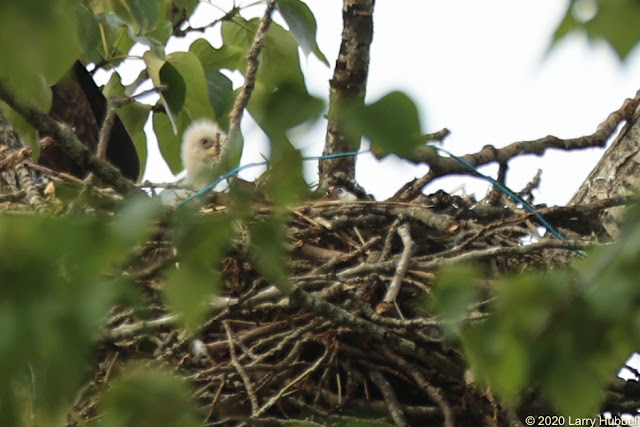 The eaglet is so small and distant I was unable to get my camera to actually focus on it. 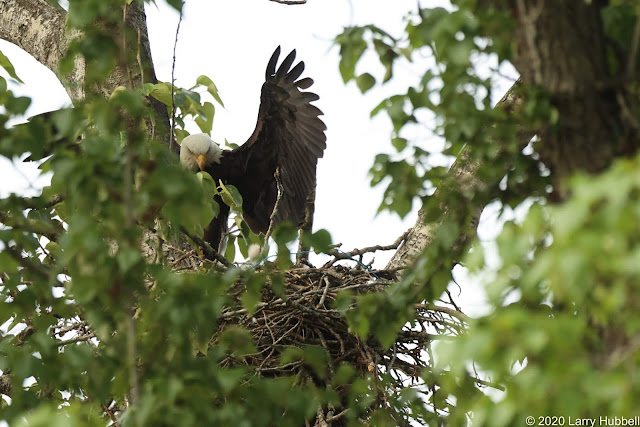 When Marsha returned after banishing the osprey, Monty had already left the nest. 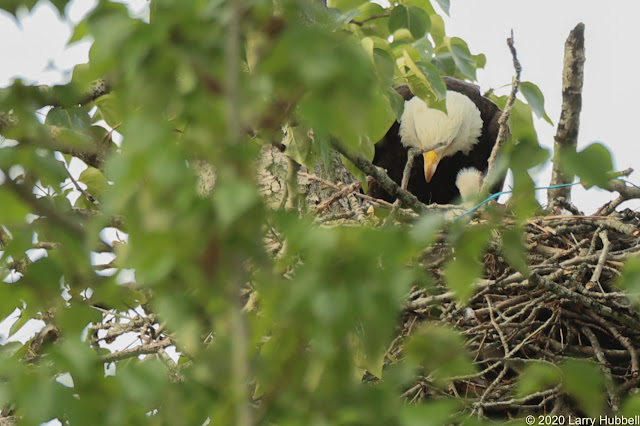 The size difference between the eaglet and Marsha is incredible. If we average the weight range of adult eagles given on All About Birds it comes out to about ten and quarter pounds. Females are actually larger than males so Marsha may weigh even more. If we average the weight of eagle eggs listed on Birds of the World (citation below) they come out at about one-quarter of a pound. Even if the eaglet has been eating for a few days, It may have weighed less than a pound when this photo was taken. 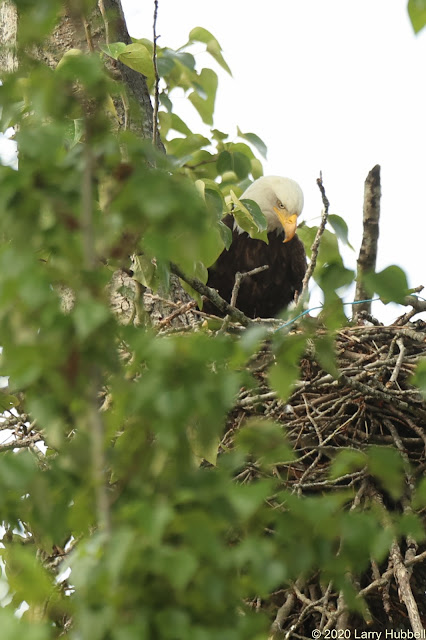 Later, after Marsha settled in and the eaglet disappeared from view, a first-year eagle passed overhead. 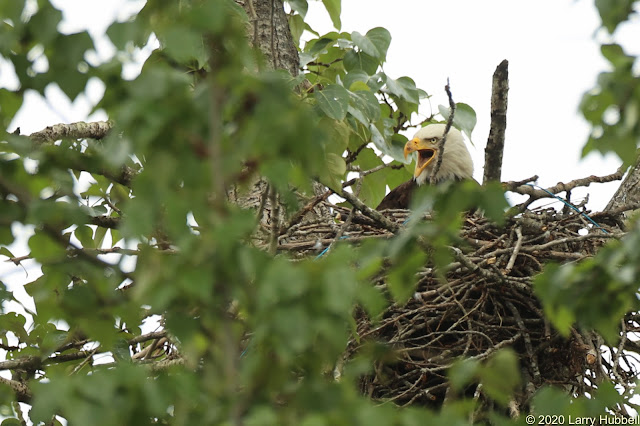 Marsha raised a ruckus and Monty immediately gave chase. After two rather aggressive dives, Monty circled back towards the nest tree. 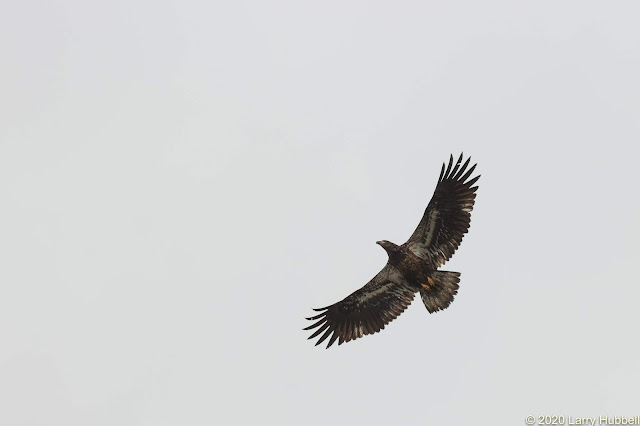 The immature eagle circled around for a last look before leaving the area.

We now know there is at least one eaglet in the nest. There could be more. They may still be too young to walk around. Even the first one has been nearly impossible to spot as the week progressed. We also know Monty and Marsha are on active alert. The eaglet patrol is strongly defending the nest site.

Curiously, this strict attention to the nest area means the outer realm of their territory is not being defended as much as it was during winter. In a sense, you might say that Monty and Marsha are sheltering-in-place. Their family focus means intruders may have more time to hang around and hunt in Portage Bay, at the far end of Marsh Island or even at Kingfisher Cove. I think this may be part of the reason we notice more immature eagles around Union Bay during this time of year. Migration also plays a factor. For example, the Ospreys have begun returning from their warm winter locations. 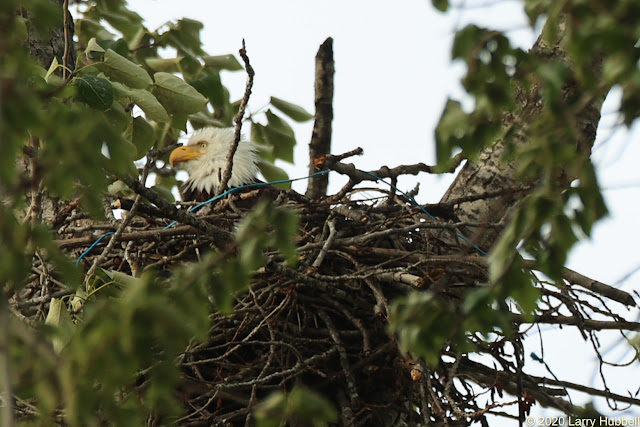 Once the young can feed (and to some degree protect) themselves the adults will switch to delivery only. By that point, the white young bird will have grown a less-inspiring cloak of gray feathers. By the time it learns to fly the gray will be replaced by mostly dark feathers speckled with white. Finally, four or five years later, the young eagle's head will turn white once again when it is ready to settle down, take a mate and reproduce. What species are these? Are they native to Western Washington? 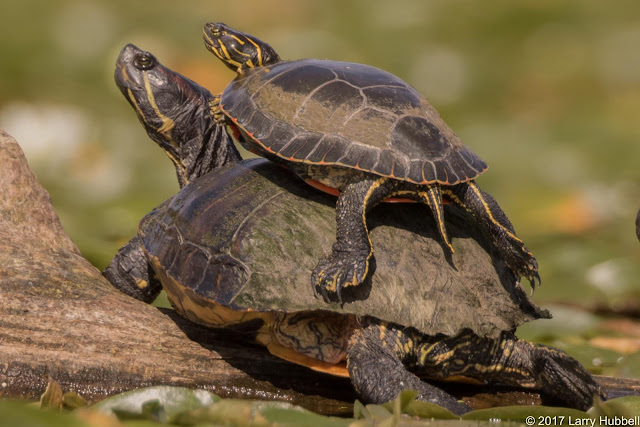 Red-eared Slider: The larger turtle is native to the lower Mississippi Valley and neighboring areas. For more information Click Here. I zoomed in, in this second photo, to try and make the 'red ear' a bit easier to see. 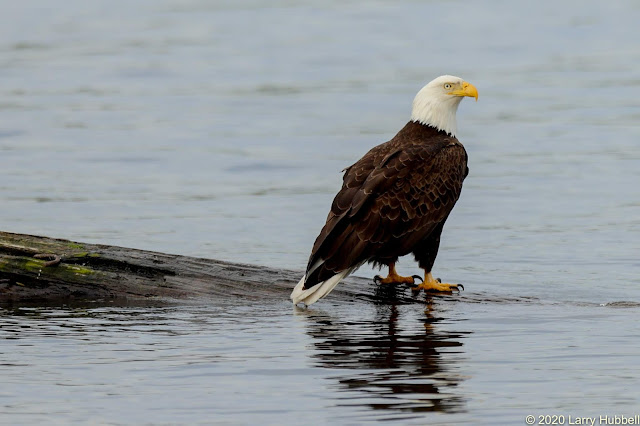 As a reward for reading this far here is a photo of Monty from last Sunday, sitting on a log along the edge of Union Bay. It looks like he is considering a swim, but actually, I think he is watching some noisy gulls approaching from the south.