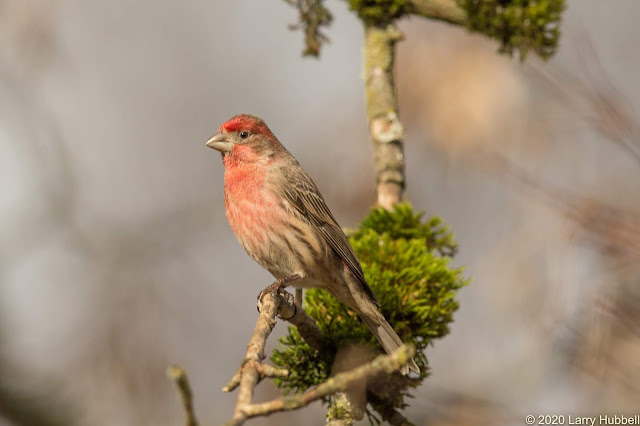 A male House Finch is a beautiful bird. Originally, they were from the southwest, which is implied in the second half of their scientific name, Haemorhous mexicanus. Today, House Finches can now be found in 49 out of the 50 states. Many years ago, they had some human help in getting to both New York and Hawaii. During the following decades, they made good use of the opportunity to dramatically expand their range. It's not surprising that a bird that originated in the desert has yet to establish itself in Alaska.

In general, House Finches tend to migrate vertically. When the snow reaches the mountains they like to come down into snow-free cities and make good use of the warmth and the seeds which they find in our bird feeders. 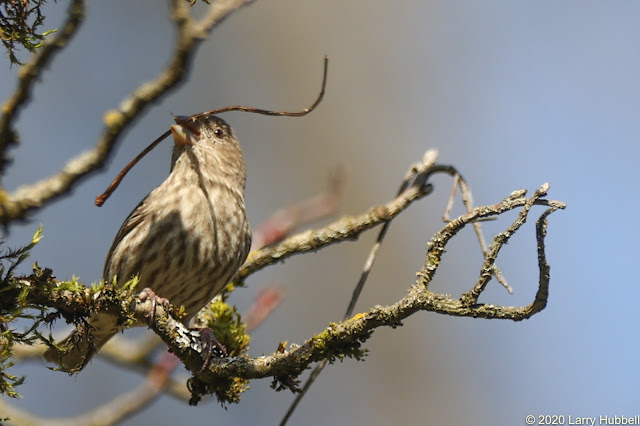 This female finch appears to be collecting the leaf stem from a Big Leaf Maple to be used in nest building.

For the most part, females lack the bright coloring of the adult males. Immature birds, of both genders, also wear basic brown.

Males get their red coloring from the fruit they eat. Depending on the fruit, their bright spots can occasionally be orange or yellow. 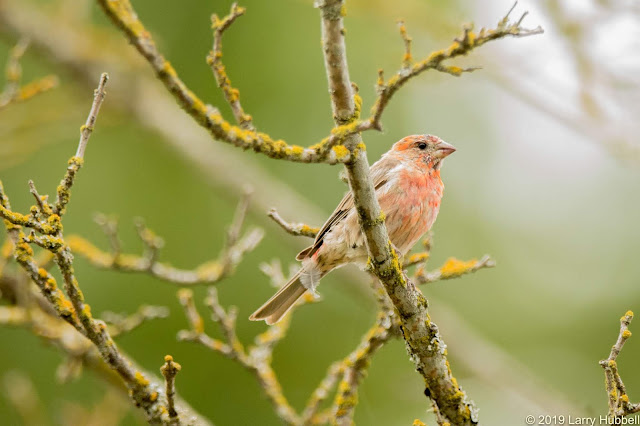 This August photo shows what appears to be a young male bird, which is apparently molting into its mature coloring. One clue to its youth is the fine streaking on the belly. Looking back at the two adult photos, you can see that their vertical belly stripes are not nearly as delicate. 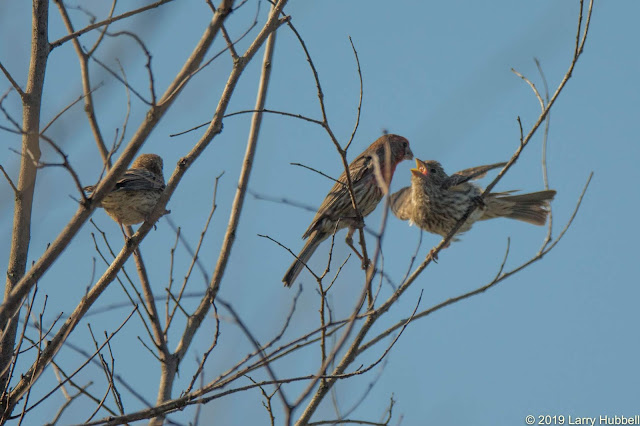 In this June photo, if you look close, you can see that a male is regurgitating food for a full-sized young bird. After the young leave their nests the male birds apparently take over all of the feedings. This frees up the females to focus on producing their next brood. All About Birds says House Finches can have as many as six broods per year. 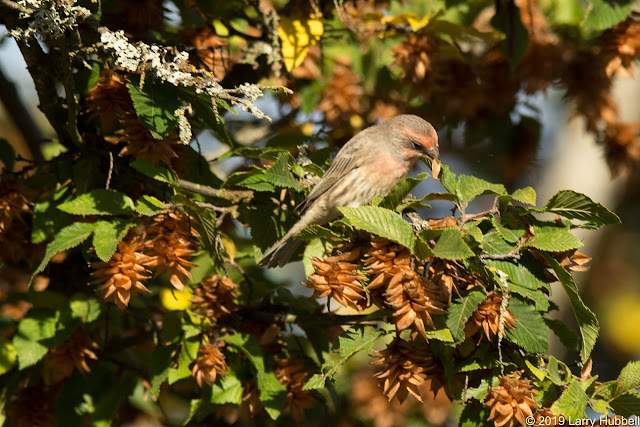 This October photo also shows a male beginning to get its color.

In the fall, House Finches regularly dismantle the 'hops'  found on the Hophornbeam in the Arboretum (on the east side of Duck Bay) to consume the seeds.

The gray-brown patch on the upper cheek is one way the colorful males can be distinguished from Purple Finches. You can learn more about their differentiating features by Clicking Here. 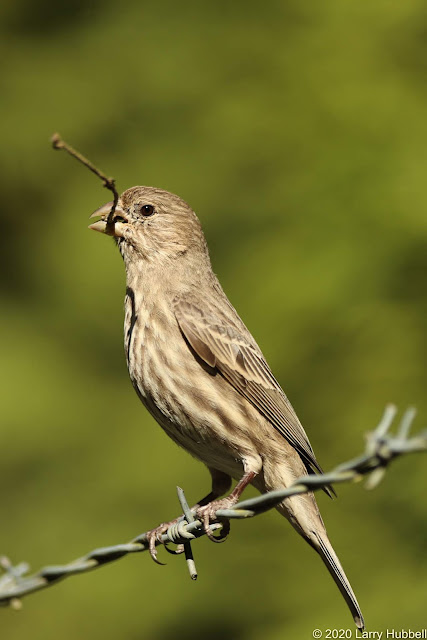 Since almost all of us are spending an abnormally large amount of time at home, this might be a good time to watch for nest-building behavior in your backyard. The House Finch starts with relatively larger twigs to build the supporting structure of the nest. 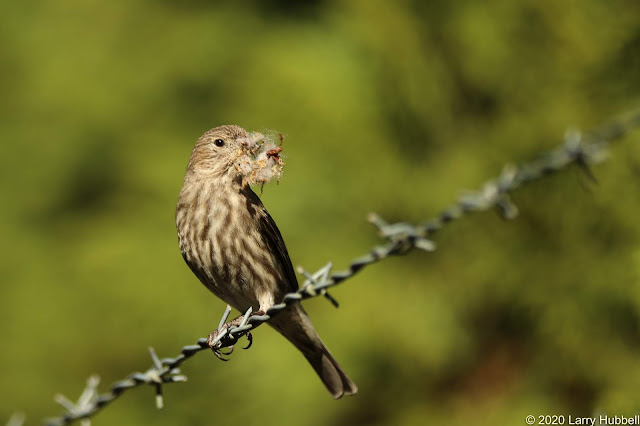 They progress to smaller and softer materials. 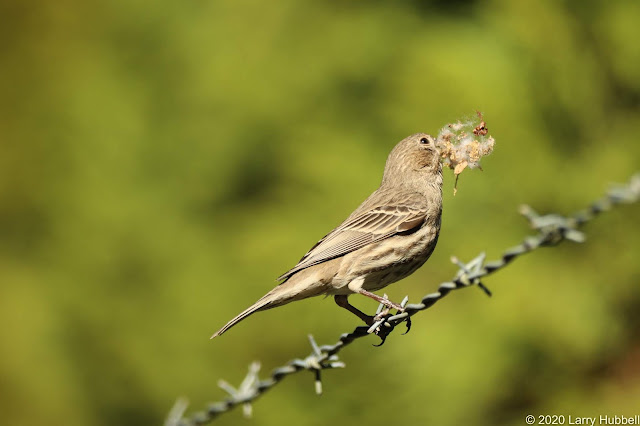 In this case, the female is eyeing the opening in the bushy conifer that leads to her nest site. 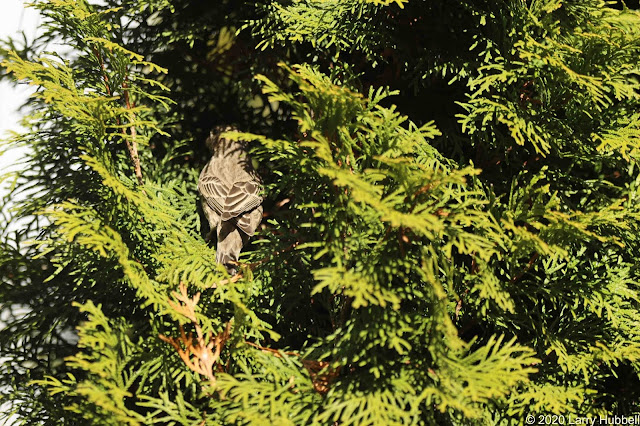 There is no way to view this nest, which is wonderful. Her eggs and her young will be much more likely to survive in such a nicely hidden location. 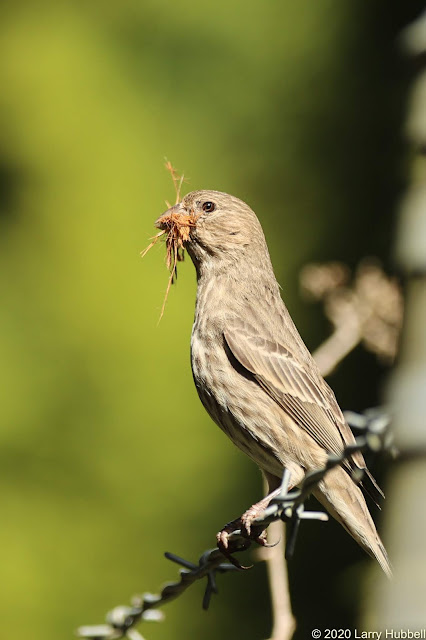 Later, she brought in what appeared to be thin strips of shredded bark. 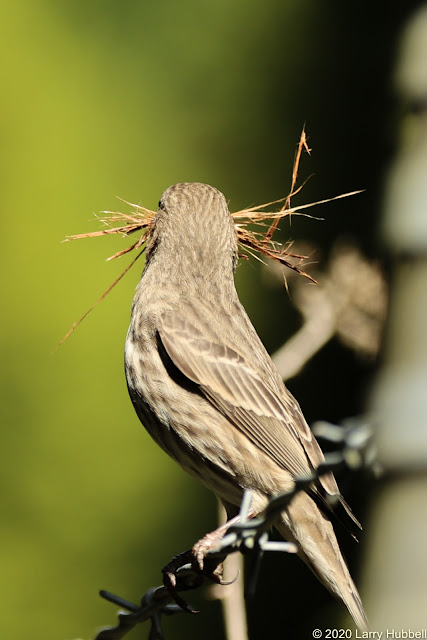 Although, from this angle, it looked more like dried grass. 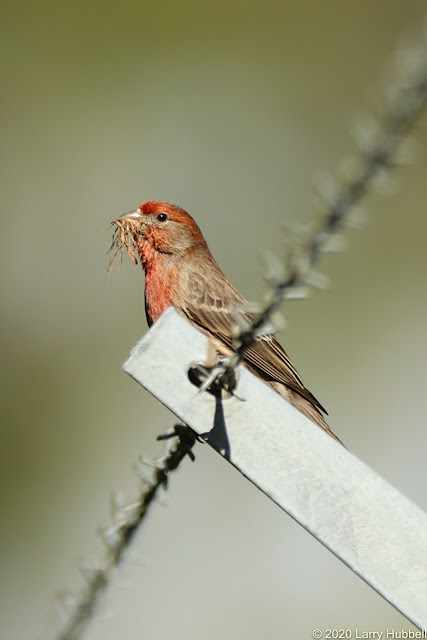 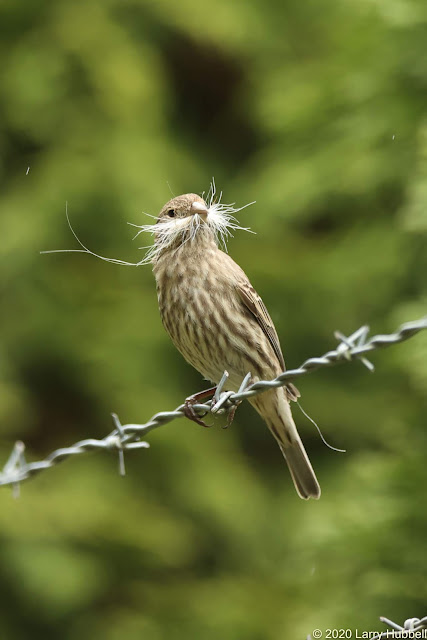 Bringing in this very fine white material seemed like an indication the nest was nearing completion. 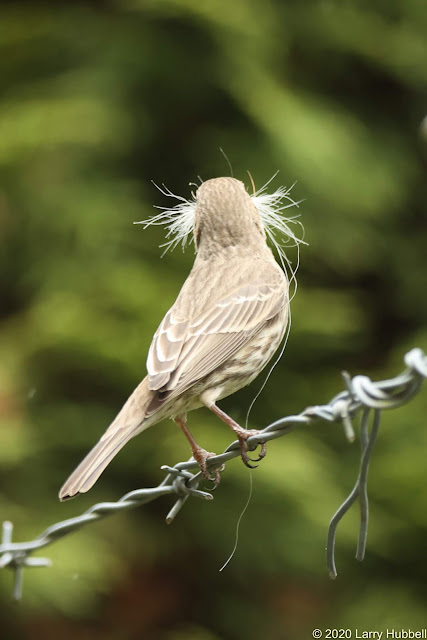 I really have no idea what type of plant could produce such a long thin fragment, but it sure looked soft and warm, just like a baby's blanket.

The materials the finches are using could be considered hints to making our backyards into wildlife sanctuaries. Leaving grass to grow tall and dry out, leaving the down from flower and tree blossoms, leaving bark that is decaying and falling off trees and leaving last year's leaves to decay on top of your flower beds could provide almost all of the materials seen in this post. Also, having some thick conifer shrubs or trees, hopefully, with vegetation all the way to the ground, could provide some nice hidden nesting spots. 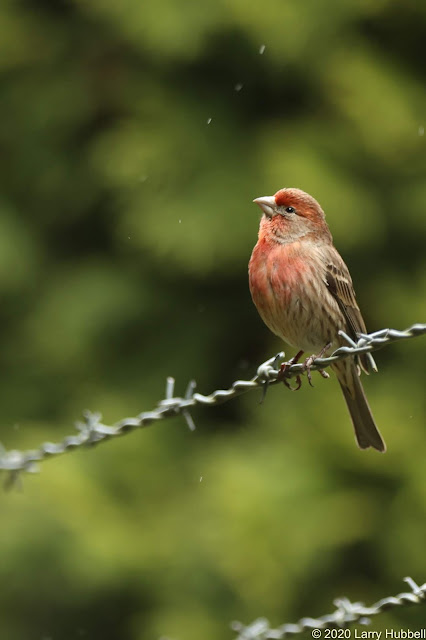 Generally, the male accompanies the female where ever she goes. Sometimes he helps bring nesting material, and sometimes he appears to be simply standing guard. In this photo, he was waiting patiently while she updated the nest. When he tilted his head, it seemed obvious that he was listening to a nearby House Finch singing its warbling song. 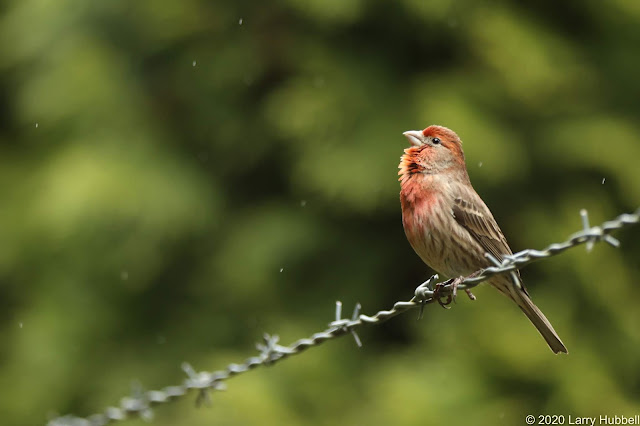 When the neighbor took a breath, the male visibly raised his head, despite the rain. 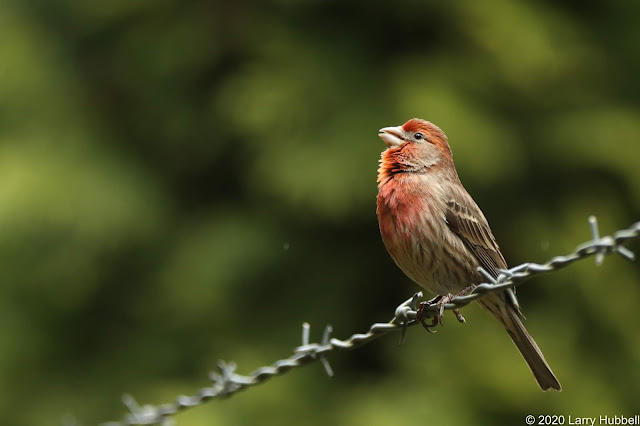 He opened his mouth and replied with his own version of the House Finch melody. As the two birds took turns singing, the male looked around apparently trying to find the source of the sound.

Clicking Here will take you to an example of a House Finch song on All About Birds. Often at the end of a phrase, a House Finch will produce a somewhat less melodic sound. In my mind it makes me think, 'Splat'. Since no other finch makes that final sound, I find it very useful in identifying the song of a House Finch, even when I cannot see them.

Have a great day on Union Bay or...in your own backyard! 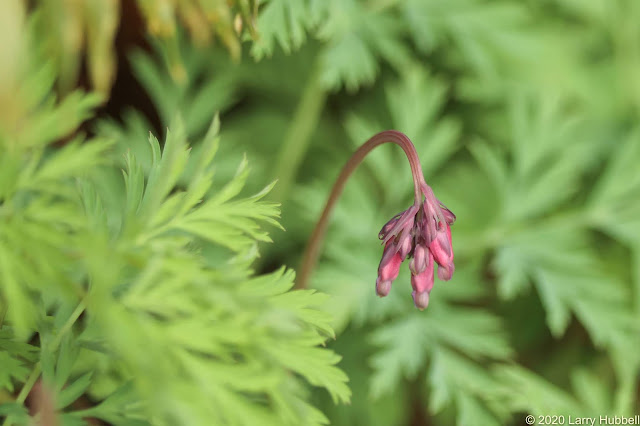 A low-growing plant that is currently beginning to bloom around Union Bay, 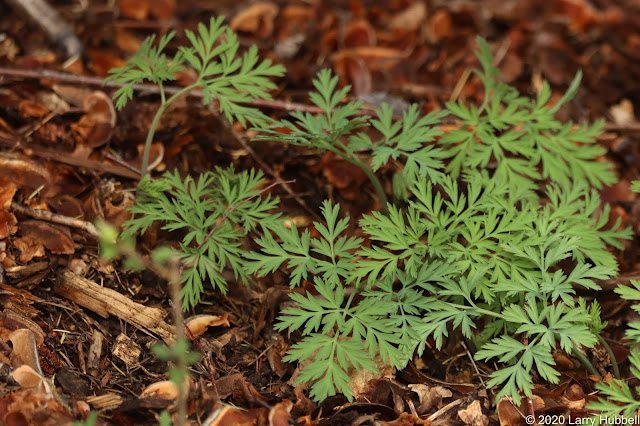 Here is a better look at the foliage? Is it native to our area?

Pacific Bleeding Heart: The scientific name is Dicentra formosa. It is a native plant that can bloom all summer if you remove the flowers as they age. Follow the highlighted link to learn more about its elaiosome. 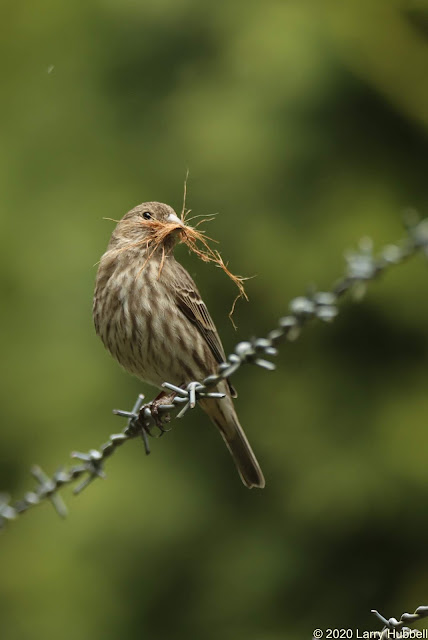 As a reward to those who have read this far, here are a few more House Finch photos. 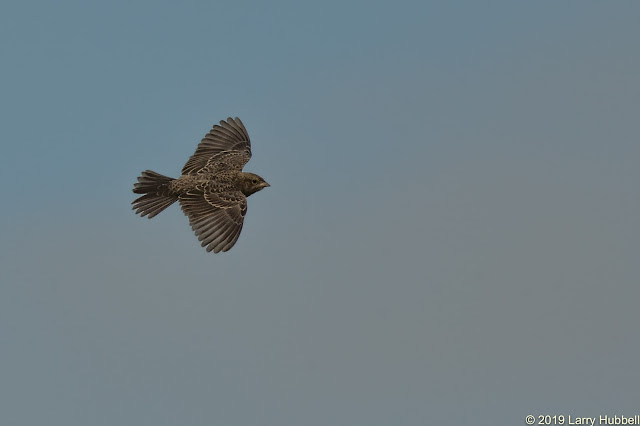 Finches generally have a 'notched tail', however, this example is a bit over the top. 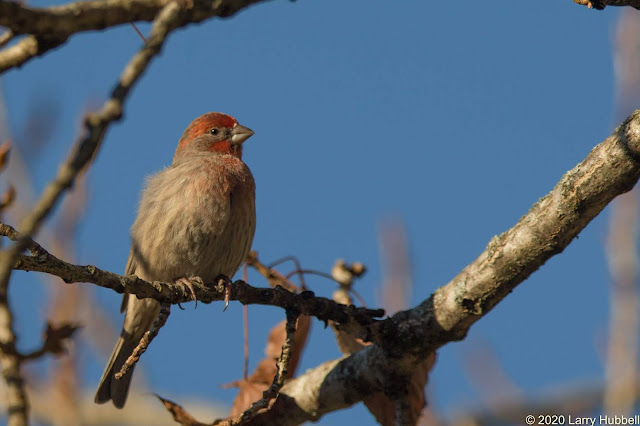 When birders refer to finches having 'notched tails' this is what usually comes to mind. The previous photo does demonstrate why the subtle, 'perched' notch exists.