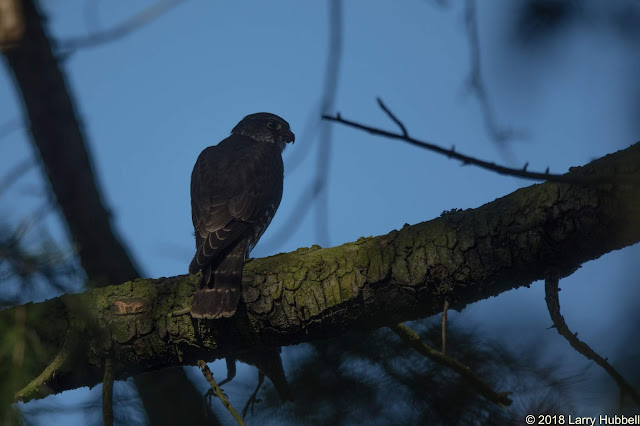 As a pair of birds crossed Montlake Cut, my eye followed their trajectory. They landed in a coniferous tree to my east. The second bird was a crow. I was less certain about the first. Before I reached the tree, two crows flew out, circled and landed nearby. My hope for some avian excitement faded.

I was almost passed the tree when I glanced back over my shoulder. I caught a surprising glimpse of a small predator sitting silently in the shadows. My initial thought was Cooper's Hawk, however even in poor light, I quickly noticed that the tail did belong on an accipiter. 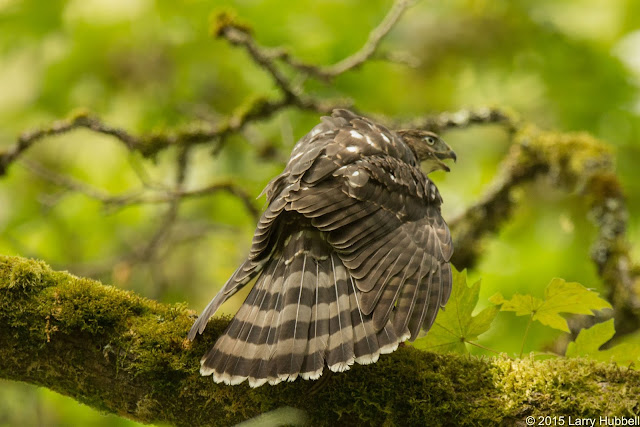 A young Cooper's Hawk may have a light (or white) coloring on the tip of the tail - as shown here. However, the light bars on the upper portion of the tail are not white and certainly not thin. Accipiters, including our local Sharp-shinned Hawks, also have much longer tails than the bird in the first photo. 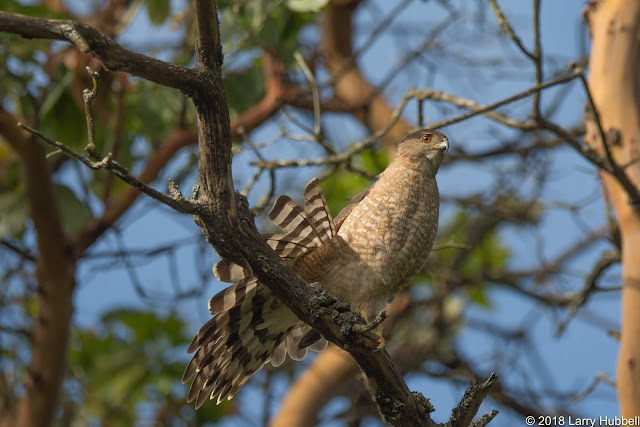 A mature Cooper's generally has less whitish coloring on the tips of its tail feathers. However, when their tail feathers are backlit the lighter barring can appear almost white. In any case, with Cooper's Hawks, the bars are wide and the tails are long, unlike the bird in the shadow.

Suddenly, I became aware of the small birds around me. I could hear a Black-capped Chickadee, an alarmed Bewick's Wren and I could see a highly observant Dark-eyed Junco staring intently at the small, dark predator. All About Birds says, "The more dee notes in a chickadee-dee-dee call the higher the threat." I heard seven in a row. 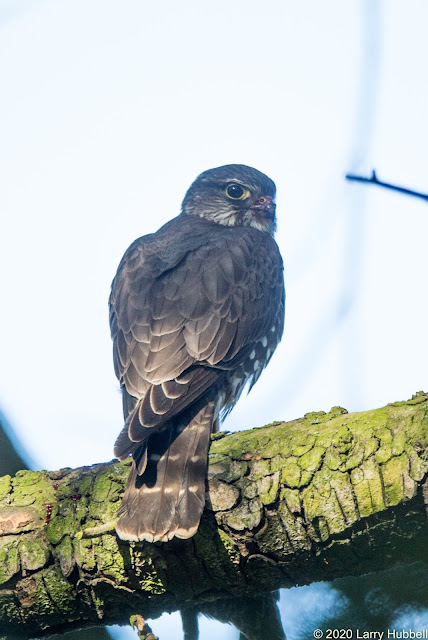 Finally, a shaft of sunlight found the perched predator. The dark eye offset by the pale yellow ring, the pointed wingtips that crossed and the multiple thin, light bars on the tail made it obvious, the bird was a Merlin. I am sure the Junco arrived at this conclusion much faster than I did. For the Junco, this type of awareness can mean the difference between life or death. 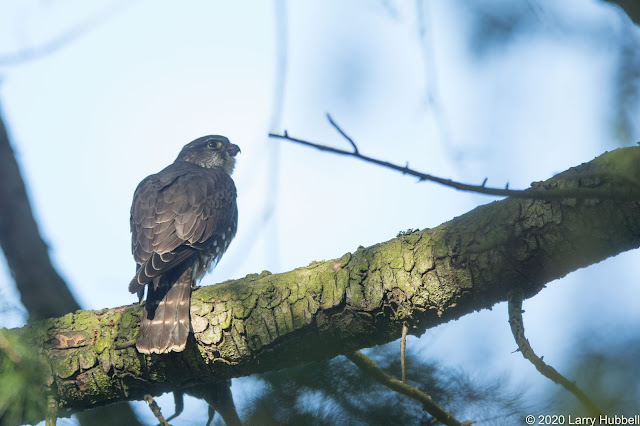 The Merlin was watching everything. It glanced up, most likely watching for the crows. 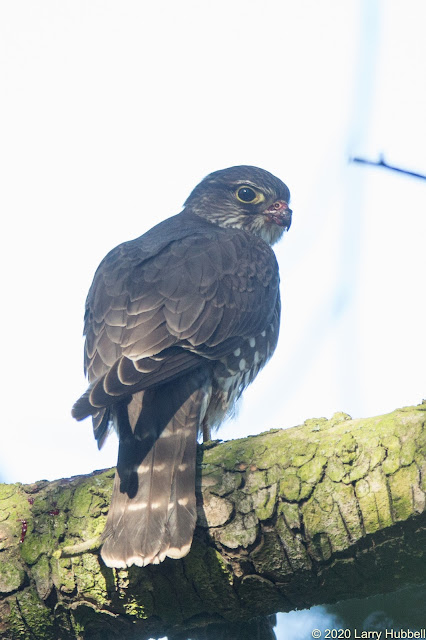 It glanced down. Checking out the small birds. It may have been making sure they were not upset by some other nearby threat. At that point, the light hit its bill. Finally, I noticed the red color and realized that coloring did not originate with this bird. I am sure the Junco was already well aware of the blood on the bill. 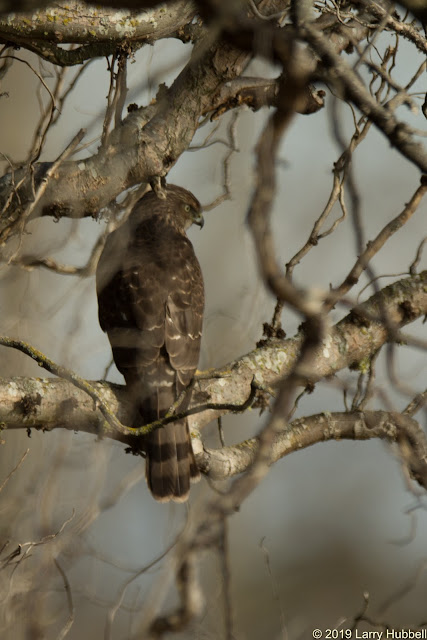 One last comparison to a perched Cooper's Hawk, notice how the wingtips stay on their respective sides of the bird's body. Unlike, with the Merlin, they do not come close to crossing or touching. 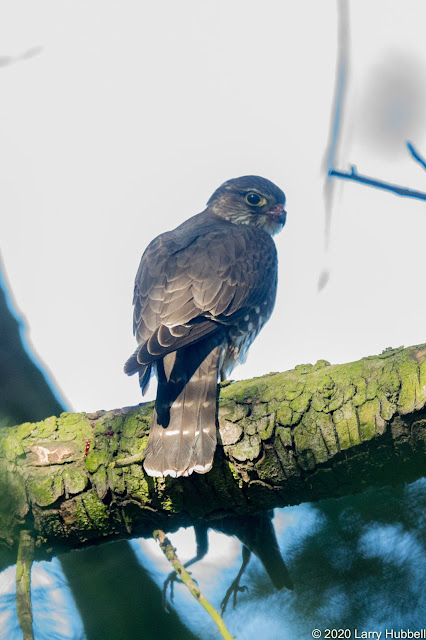 Glancing below the branch, I finally noticed the tail and feet of a smaller bird. My respect for the observation skills of the Junco continued to increase. 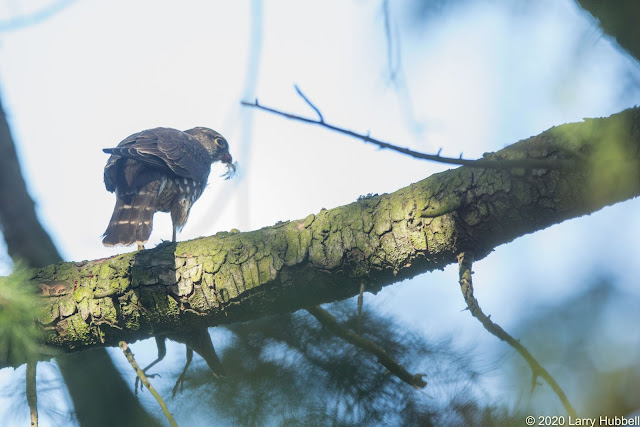 Once the Merlin felt relatively safe, it resumed plucking and feeding.

There are three subspecies of Merlin in North America.  The Black Merlin, residing in the Pacific Northwest, is a stationary, year-round resident. (Maybe we should be thankful for those warm winter rains.) The other two Merlin subspecies migrate south during winter. 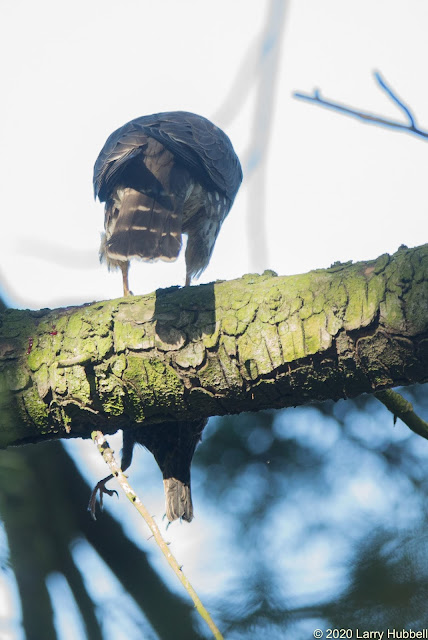 During the feeding process, the tail of the prey was briefly exposed to sunlight. I began wondering if I would see enough to identify the species of the prey. 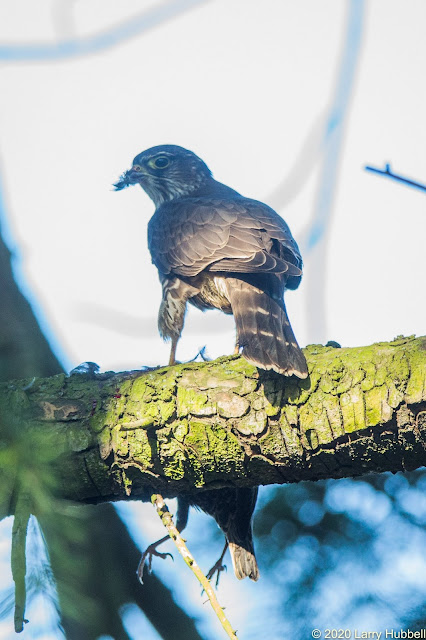 The Merlin continued to keep a watchful eye on its surroundings. 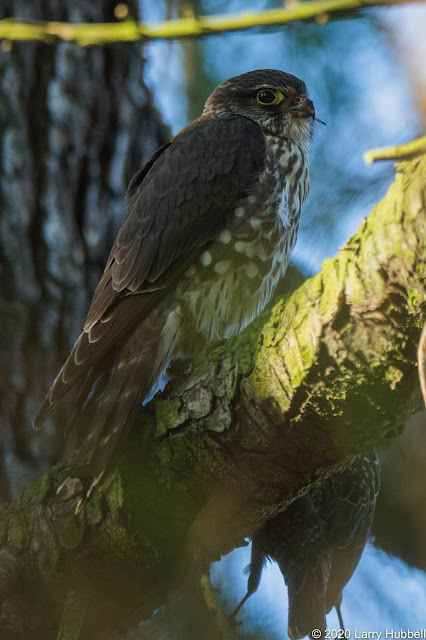 Later, while reviewing the photos, I found an angle where I can just barely make out light-colored spots on tips of the feathers on the back of the bird being consumed. I can think of only one bird, with these types of spots, and especially, this time of year. 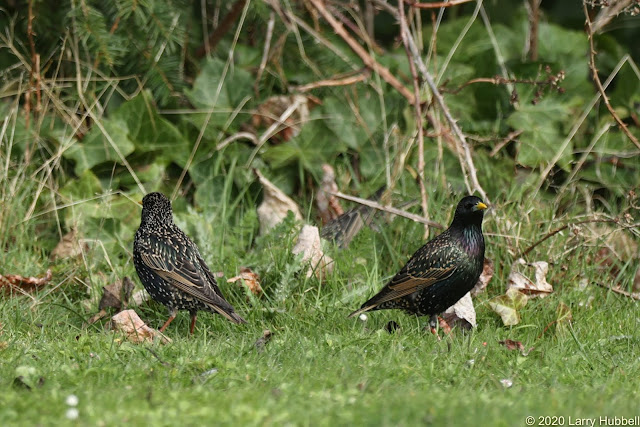 I suspect the prey was a European Starling. Given that starlings are invasive and chase  native birds out of their nest sites my empathy for the starling passed quickly. 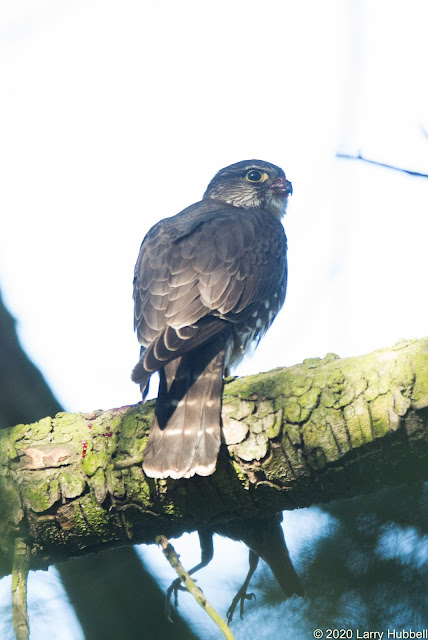 It looked like the Merlin had consumed about half of the starling by the time the crows returned. They came in quietly, hopping from branch to branch among the shadows. The Merlin watched their approach but did not appear nervous. They ended up directly above the Merlin.

Finally, a crow dived. It descended directly at the Merlin. The Merlin called out loudly as it took flight. I could not see the action. However, I circled a dividing hedge in time to see the Crow eating three or four small bites of food. Apparently, the Merlin escaped with the bulk of the remaining food. 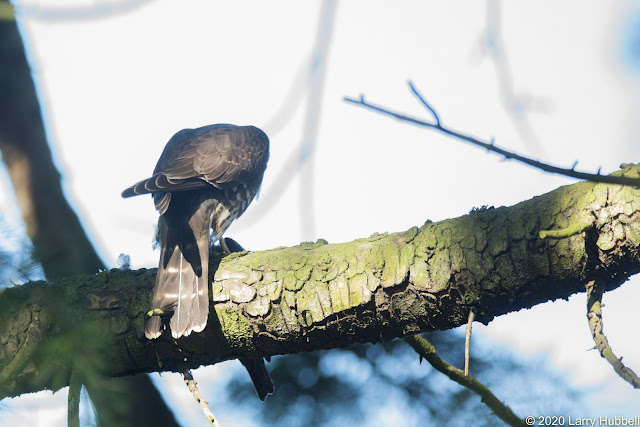 Earlier, as the Merlin moved about, the sunlight fell on its crossed wingtips and projected a shadow on the upper tail. Even when not in use, the sharply-pointed primaries of this small falcon were evident. I smiled at the thought, "X marks the Merlin". 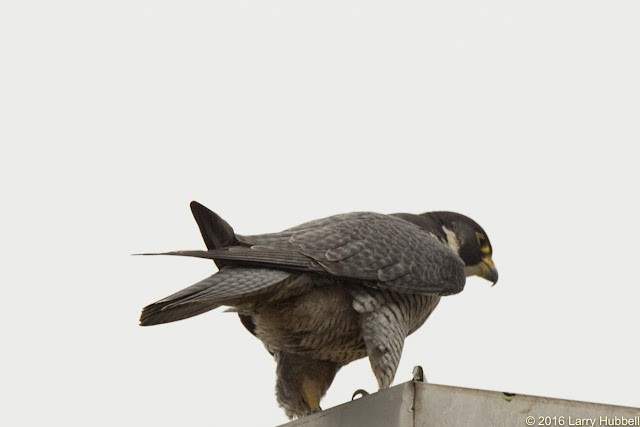 This photo of a Peregrine Falcon implies, it might be more appropriate to say, "X marks the Falcon. Actually, in most of my perched peregrine photos, the wingtips are generally not crossed. A question for a future post might be, Do any other predatory birds have wingtips that frequently cross?

Surprising Fact: According to the weight ranges listed on All About Birds, the largest Peregrine Falcon (most likely female) can weigh tens times as much as the smallest Merlin (most likely male). 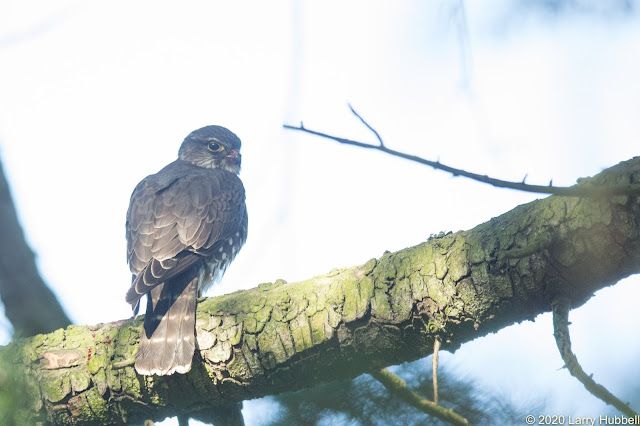 It may be impossible to know what a bird feels, but in my opinion, the Merlin behaved fearlessly. It stood its ground, as long as possible. Even though it was facing two larger opponents, who were intent on stealing its lunch. The Merlin's screech sounded more like anger than fear. Plus, the Merlin was strong enough and fast enough to carry significant weight and still escape the Crows.

Not surprising my previous post about a Merlin also included Crow harassment. Click Here to read about it. Crows may be larger and possibly the more intelligent species. However, one on one, I would bet on the Merlin. 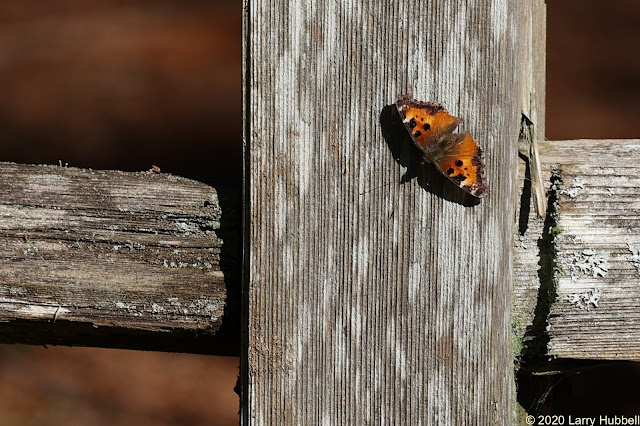 What species of moth is this? Is it native to our area?

Sorry, that was a trick question. Last month, when I took the photo I really thought I was looking at a moth. Much to my surprise, the matching photo I found was on page 342 of Merrill A. Peterson's 'Pacific Northwest Insects', under Brush-footed Butterflies. They are native to the area. The scientific name is Nymphalis Californica. For more information Click Here. Note: Depending on which photo is displayed, when you get to the linked website, you may need to page through a couple to see a similar example.

As a reward to those who have read this far, here are a photo of a young Cooper's Hawk. 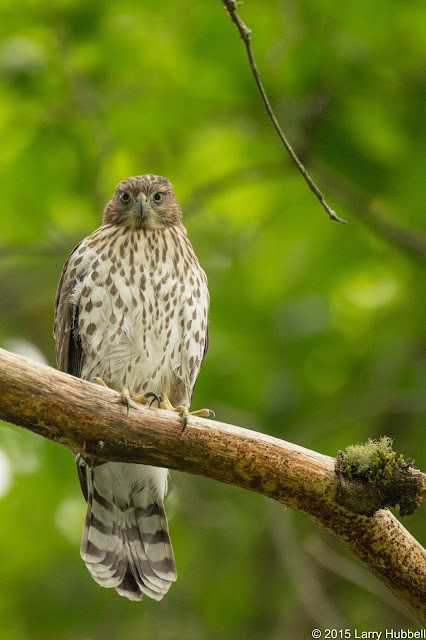 Notice the graduated length of the tail feathers - unlike what you would see with a Sharp-shinned Hawk.