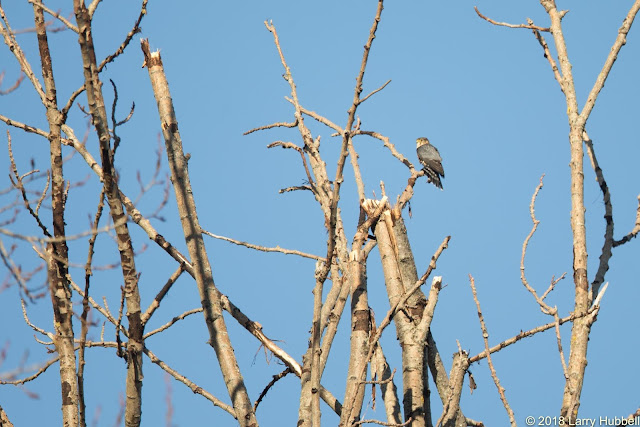 A Merlin sitting in the remains of a leafless tree above Union Bay is like a small bubbling bundle of predatory excitement waiting to explode. Merlins are smaller members of the Falcon family. They often capture even smaller birds like Sparrows and Waxwings.

Unlike Peregrine Falcons, which commonly attack from a height, Merlins will often attack horizontally. Then can come in at high speed across the treetops, cattails or water. They must be able to process an amazing amount of visual information. A single misunderstood, split-second decision could easily be the end of a Merlin.

More than once, I have seen Merlins come in horizontally towards a Pileated Woodpecker. Each time the woodpecker was hanging on the trunk of a tree. At the last possible moment, apparently, when the Merlins caught a close look at the size of the woodpecker and its bill, they made high-speed ninety-degree turns and wisely abandoned their attack. 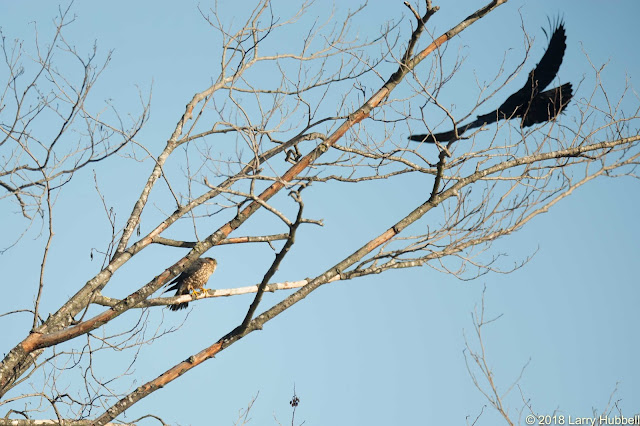 Last week, the tables were turned by an aggressive Crow. 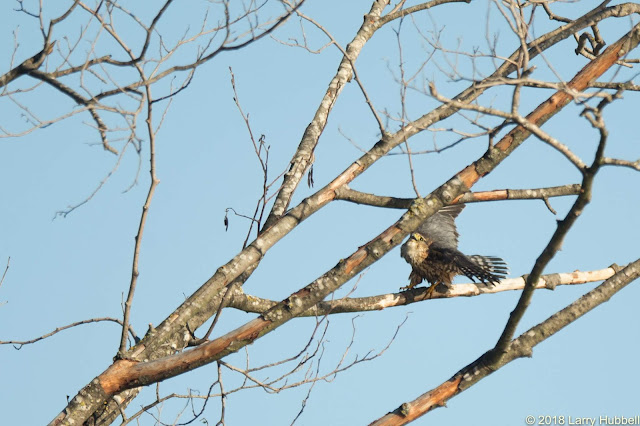 The fierce, little Merlin is similar in length to a robin. However, their wingspan is on average around seven inches wider - approximately twenty-four inches. Plus, a Merlin can weigh more than twice as much as a Robin. I suspect much of the weight difference may be devoted to chest muscles, which help to increase their flight speed. 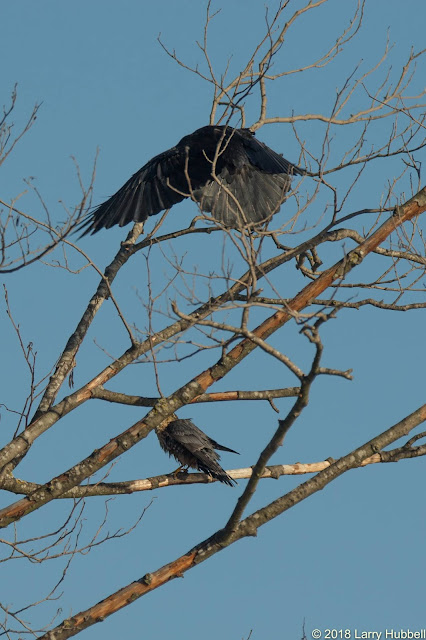 Due to the grey-blue color on this Merlin's back, I believe it was a male. Similar to most other Union Bay raptors, the males are generally smaller than the females. The female Merlins are also browner in color. 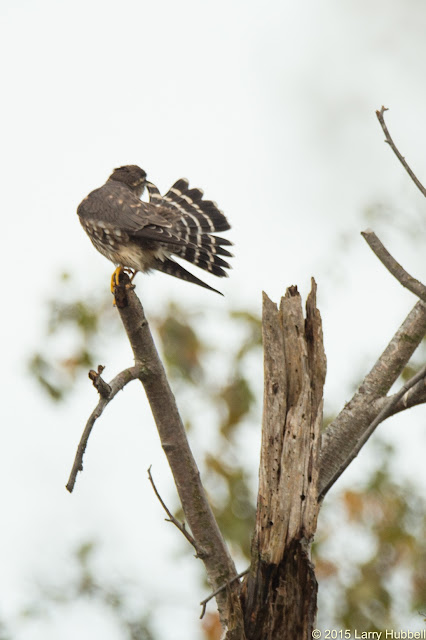 This photo from 2015 shows what I believe is a younger Merlin whose coloring is more similar to that of a female. 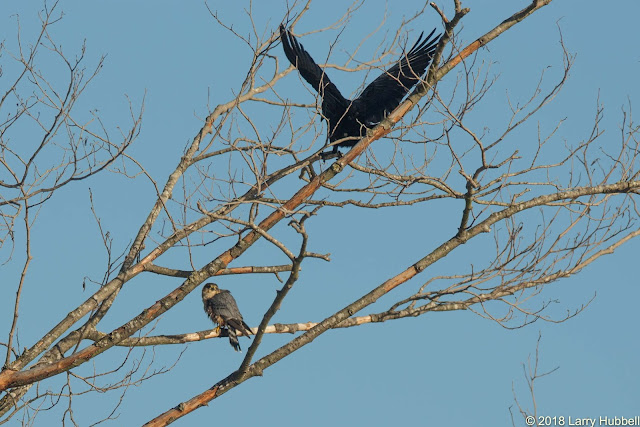 Clearly, the Crow was making the Merlin uneasy. Normally, I see crows harassing larger birds like Bald Eagles and Barred Owls. Occasionally, Crows will chase Cooper's Hawks. Although, that can be dangerous as Cooper's Hawks often turn around and chase after the crows. I really cannot imagine why the Crow was so intent on harassing the speedy, little Merlin. In breeding season, I would think it would be much more likely to see a Merlin chasing a Crow. 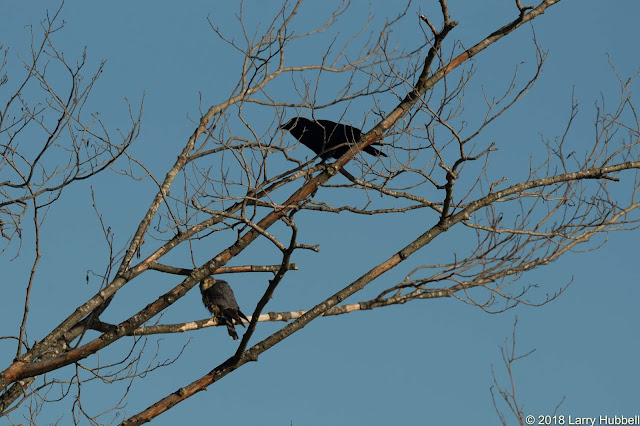 The only way I can imagine a Merlin directly endangering a member of the Crow family would be in the Spring. I suspect a Merlin might raid a defenseless Crow's nest if there were no parents in close attendance. According to Sibley's the average Crow weighs more than twice as much as the average Merlin, potentially, even more in the case of male Merlins. 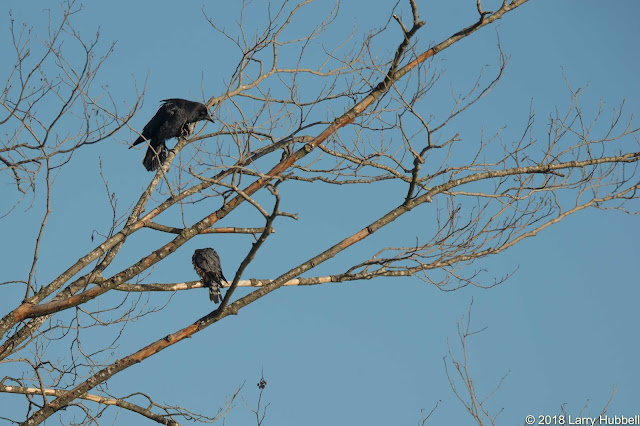 The Crow's persistence was successful and the Merlin took to the air multiple times. Each time the Crow would follow and the Merlin would make an abrupt turn. The little Falcon was not only faster but far more agile as well. Repeatedly, the Merlin landed in a higher location. I suspect the greater the elevation, the greater the distance from potential prey. 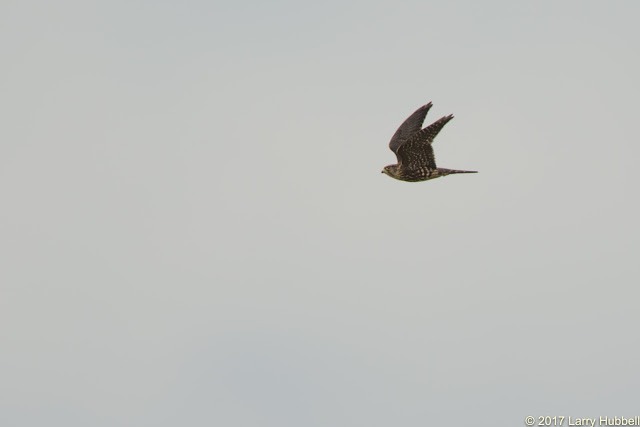 In this 2017 photo, we can see the sharp, pointed wings of a Merlin in flight. Among predatory birds, this look is characteristic of falcons. It also looks somewhat similar to pigeons in-flight. All About Birds says this is why the older term 'Pigeon Hawk' originated, as a description for a Merlin. 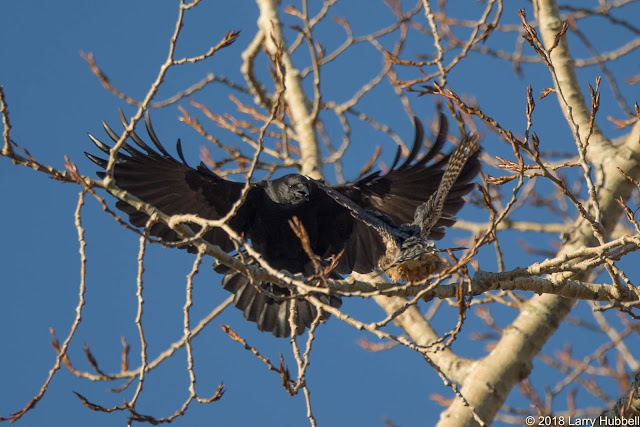 This photo clearly displays the dramatic size difference between our little male Merlin and the adult Crow, who has a wingspan in excess of three feet. 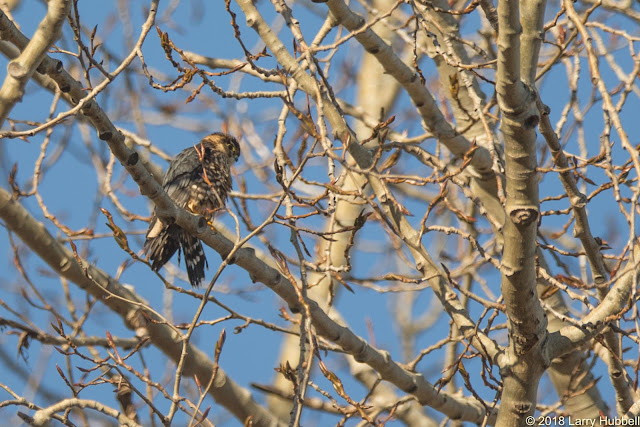 After a number of high-speed chases, the Merlin ended up among the dense upper branches near the top of a tall cottonwood tree. 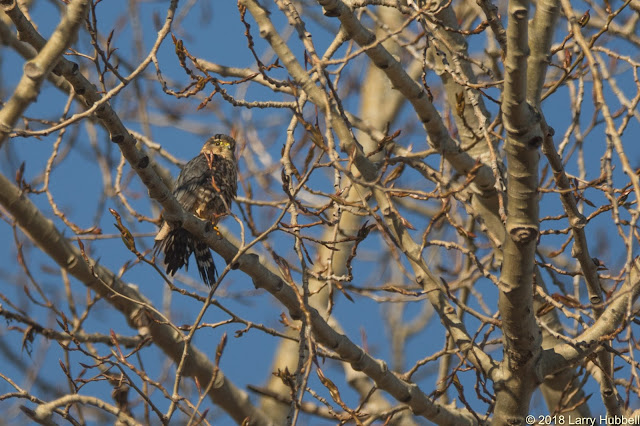 It seemed to be enjoying the abnormally bright afternoon sun. 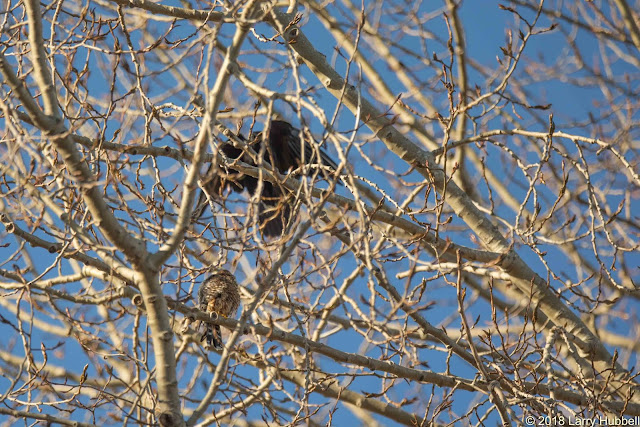 The Crow continued to hang around but apparently felt uneasy about getting too close given the density of the branches and twigs. 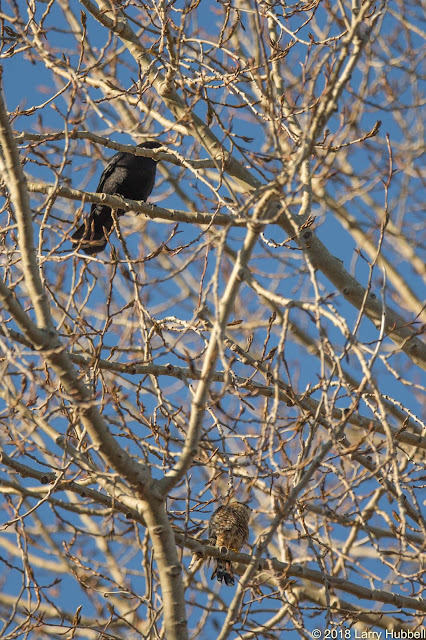 I suspect the Merlin never lost sight of the Crow. Finally, the Crow flew away. It landed on a small island, not too far away. The Crow spent just a few minutes there, walking around next to another Crow which had been searching through the mud for sustenance. 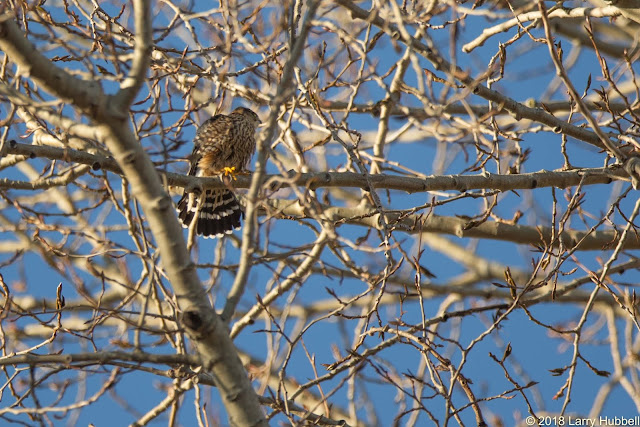 Soon the first Crow returned to the Cottonwood tree. It stayed just to the north of the Merlin, focusing the smaller bird's attention. At the same time, the second Crow flew to the top of the next Cottonwood to the south. I saw no other Crows in the area. I am assuming the second Crow was the mate of the first one. 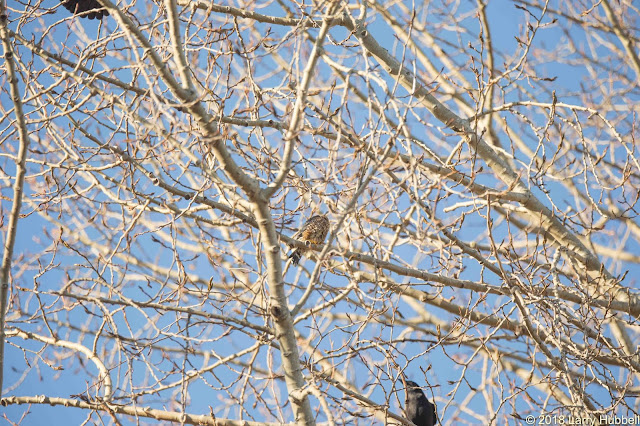 After a few moments, the second Crow came over and quietly landed in the tree above the Merlin. This was as close as I could get to catching all three birds in a single photo. You can just see the tips of the second Crow's tail feathers in the upper left. 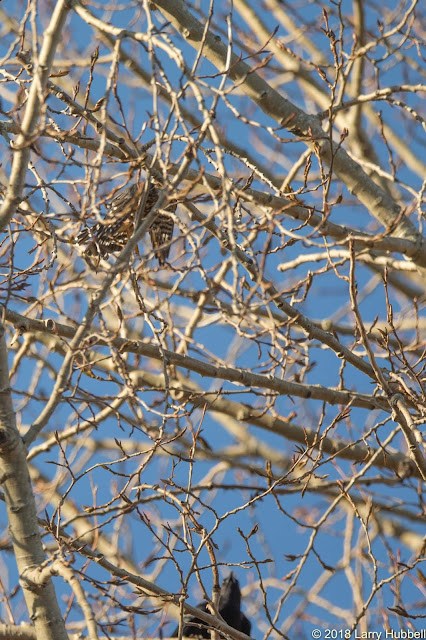 As soon as the Merlin realized it had a Crow on each side, it abandoned its post and took to the air. In just a couple of heartbeats, the Merlin disappeared over the treetops to the northwest.

I was left to wonder how smart are the Crows. Did the first Crow actually tell the second one about the Merlin, and then request its help? Did they discuss a plan of attack? or Do they just naturally surround the object of their disaffection? Could a male Merlin, at potentially only one third the weight of a Crow, actually harm a Crow? If not, why was the Crow so determined to move Merlin on its way? Could it be that the Crow saw the Merlin as a superior competitor who might deplete the potential prey in its territory?

One of the great joys of observing nature is the unending opportunities to learn. We may never completely understand the life forms around us. However, as we slowly chip away at the challenge, step-by-step, we increase our understanding of what it means to live in harmony with nature. 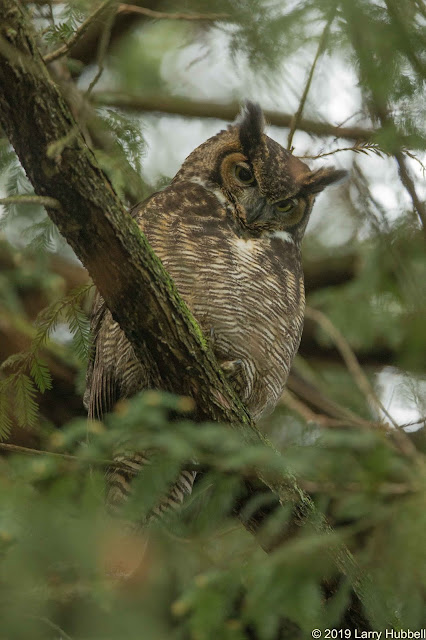 (Update: I should have said the largest owl, except for the Snowy Owl, and the most widespread. Thank you, Alan, for your thoughtful help!)

It is basically, native to the whole continent. On January first, it (the Great Horned Owl) was certainly worthy of being surrounded by a scared murder of crows. The calls of the crows led me to the owl like the auditory equivalent of a flashing neon sign.

Posted by Larry Hubbell at 1:58 PM