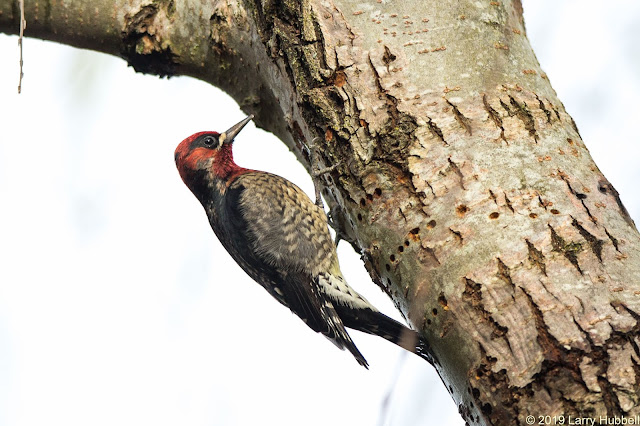 On Christmas Eve, this Sapsucker was feasting on a Willow tree next to Duck Bay, at the northern end of the Arboretum.

Learning to identify the life forms around us is certainly one of the first steps to appreciating our urban web of life. Since we are the dominant species on the planet, everything we do impacts our fellow creatures. Where we live, what we eat, drive and buy. The undisturbed habitat we leave in our yards, as well as the native seeds and fruits we allow to mature, can have a huge impact on our neighboring lifeforms. Understanding their needs will not only make our lives richer and healthier it is a critical step to a flourishing future for life on earth.

Take a closer look at the sapsucker (above), its holiday meal, and its surprising impact on the web of life. 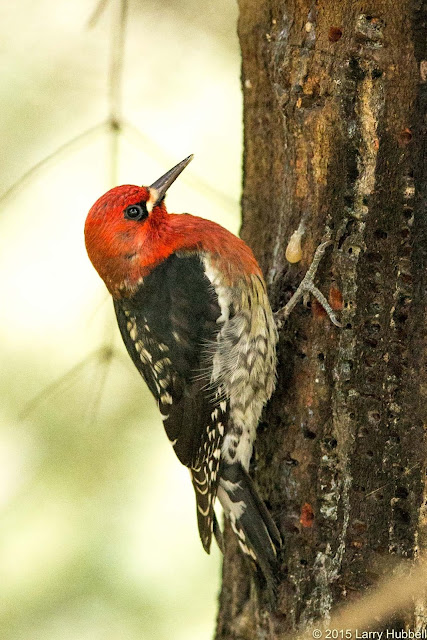 To help with identification, let's compare this 2015 photo of a locally common Red-breasted Sapsucker. Does it look like the sapsucker in the first photo? What differences do you see?

Most obvious is the redbreast on the 2015 bird. It is clearly what inspired its name. On the other hand, there is virtually no red on the chest of the 2019 sapsucker. 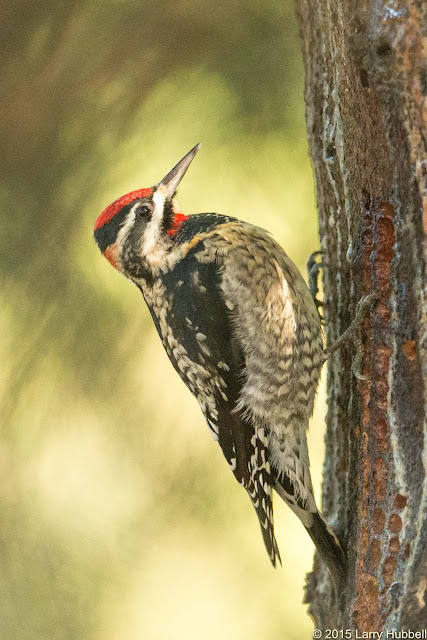 This photo shows the only other species of sapsucker I have ever seen in Seattle. It is a, locally rare, Red-naped Sapsucker, also photographed in 2015. A third sapsucker, the Yellow-bellied, is even less likely in our area. Both of these species are known to interbreed with Red-breasted Sapsuckers and neither have red on their breasts. 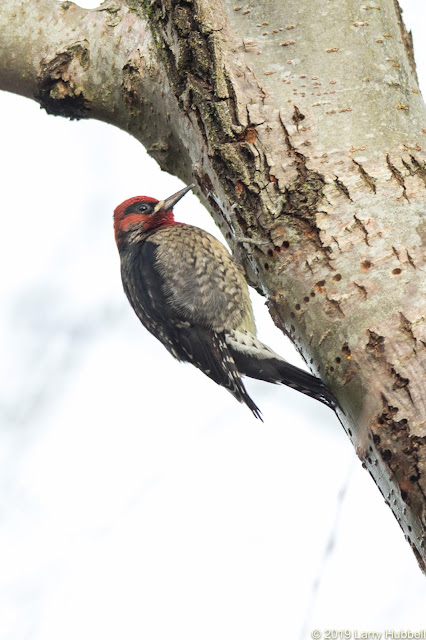 This 2019 bird appears to be a unique individual. The black mask around the eye appears to be personal variation. Maybe this is how a new species begins. If this bird's unique DNA is passed on maybe someday its progeny will form another species. They might even be called, Black-masked Sapsuckers. 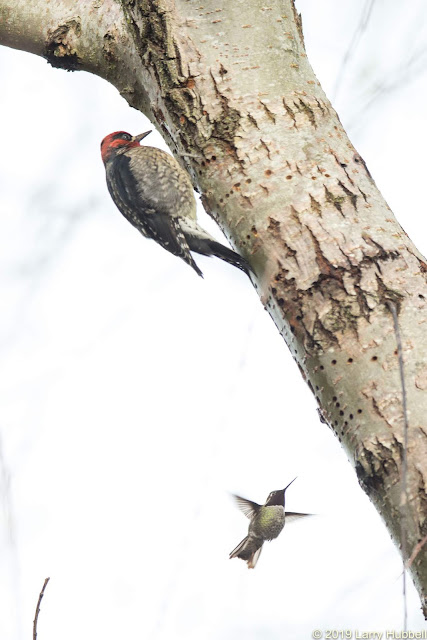 In any case, all the Sapsuckers have the ability to drill sap wells. They drill just deep enough to cause sap to flow out of the trees. Other creatures, like this Anna's Hummingbird, are wise enough to stop by and share in the meal, even though they lack the ability to create sap wells for themselves. 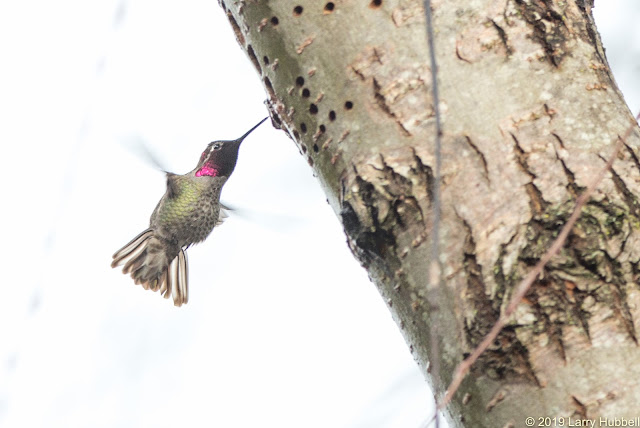 While hovering the hummingbird uses its tongue to lap up the sap. For the most part, the sap will only flow out of the tree while the sapsucker is keeping the wells open and functional. (Although, after this Sapsucker left the Hummingbird was seen a couple of days later checking for additional sap and/or insects.) 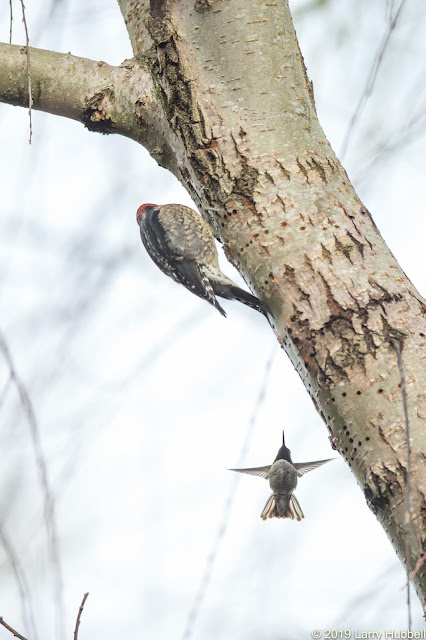 This photo shows that the two birds were aware of each other, neither one appeared particularly intimidated and both were perfectly willing to share their holiday meal. 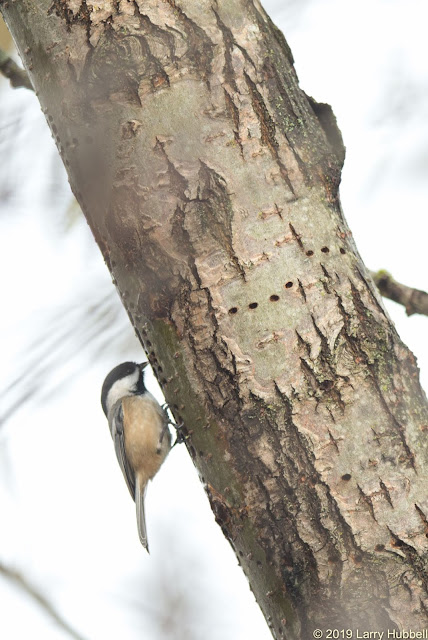 Later, a Black-capped Chickadee stopped by to check out the possibilities. Chickadees do like insects and it is possible that a very small creature, trapped in the sap, may actually have been what attracted the Chickadee. 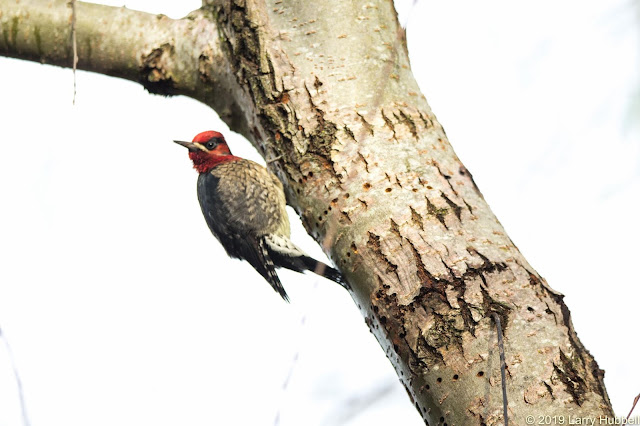 During these visits the Sapsucker had remained undisturbed. Its body was virtually stationary while feeding just below this branch. However, when it began turning its head and looking around I figured something was up. 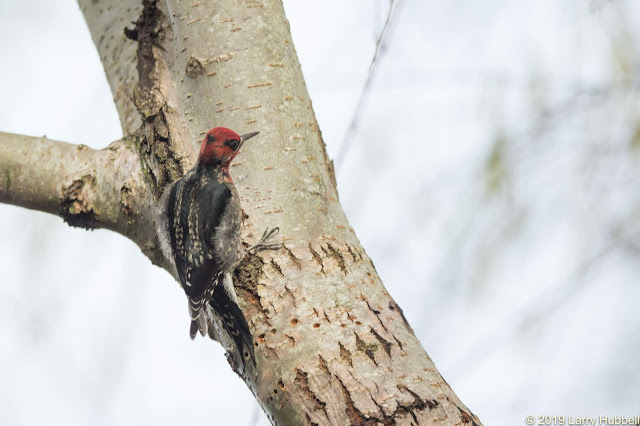 As it moved away from its favorite set of wells I suspected a nearby predator. 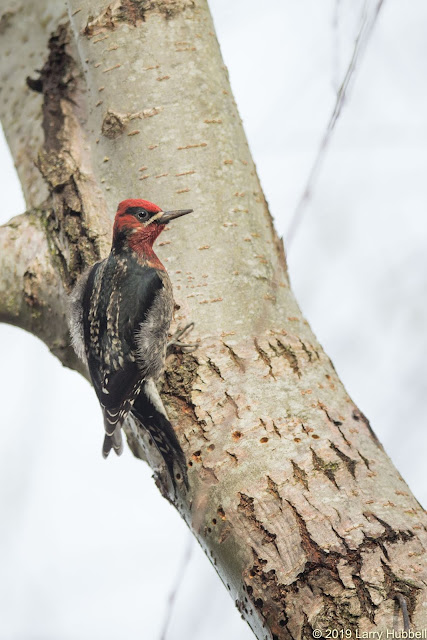 With its head and neck extended the Sapsucker was clearly on alert. 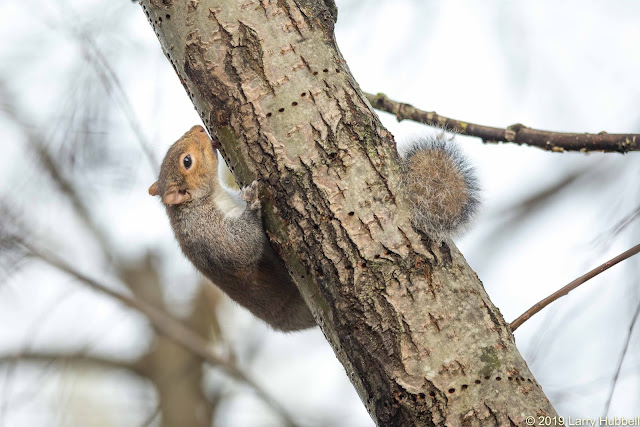 A moment later, I noticed the Eastern Gray Squirrel. 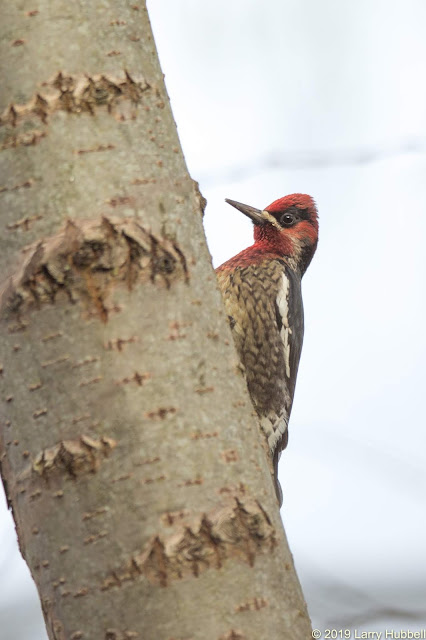 The Sapsucker, with its small crest erect, moved to a nearby perch. The Squirrel moved on up the trunk. Squirrels in the area can often be seen eating acorns but apparently, sap makes a nice dessert. 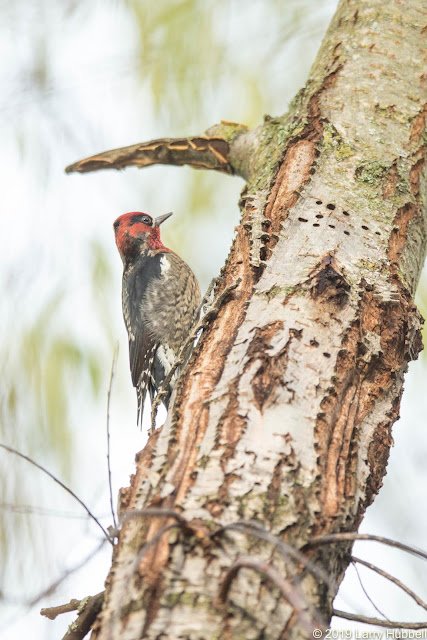 The Sapsucker moved again to a more extensively used location on a nearby portion of the tree. It appears the bark of the tree actually split apart along the vertical lines of previous sap wells. I believe this willow is a Salix Alba or White Willow, an Old World native, which helps explain why the sapsucker damage is so extensive. 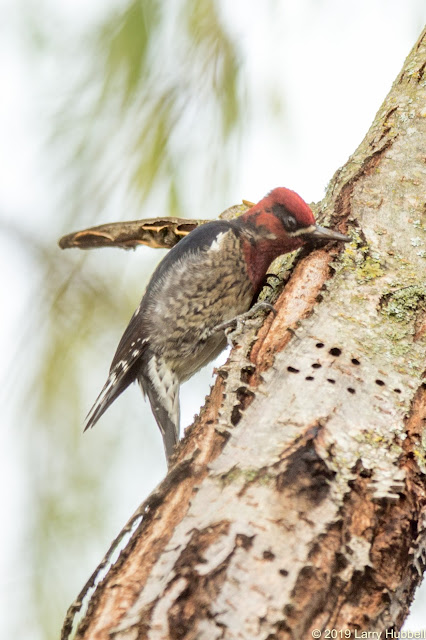 There are no Sapsuckers in the Old World. As you can see, this tree species never developed a thick protective bark, unlike our local Douglas Firs and Western Red Cedars. 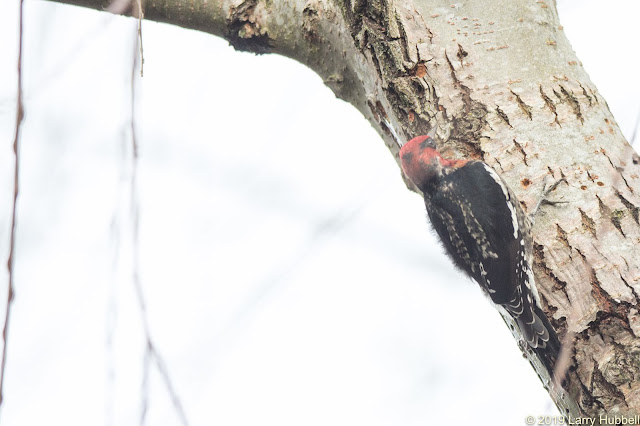 After the Eastern Gray Squirrel moved on the Sapsucker moved back to its preferred location. 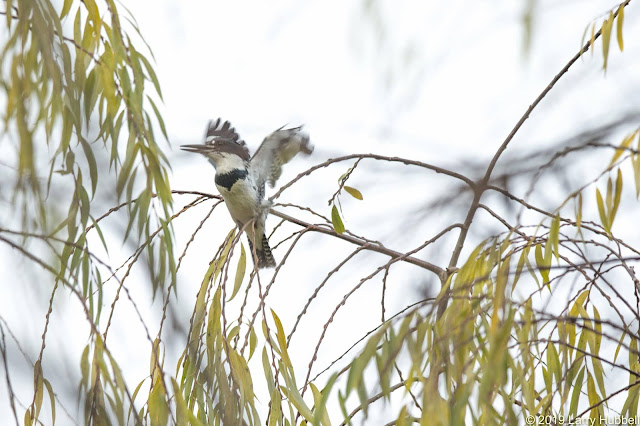 Moments later a male Belted Kingfisher stopped in. I suspect all the commotion was just a bit much for the Kingfisher and it quickly flew. It chattered loudly and sounded a bit perturbed. I have never seen a Kingfisher eat anything but small fish so I suspect it was just looking for a quiet perch above the water and did not really want to share in the sap. 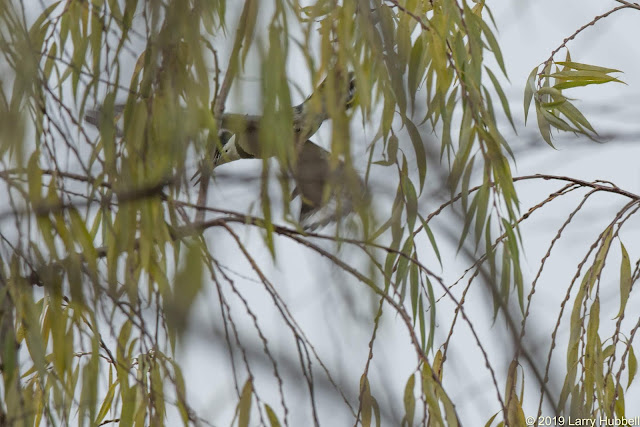 As the Kingfisher flew away, another surprise became apparent. This particular Willow Tree was obviously different from its neighbors. It still had some leaves on December 24th. 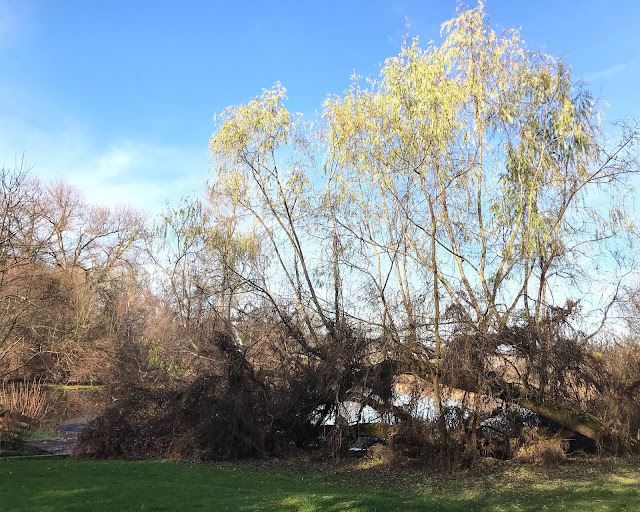 A couple of days later, when the sun came out for a moment, I caught this photo of the same tree. All the neighboring willows are bare. Their leaves have fallen and their sap has presumably stopped. This old fallen willow, with fresh sprouts, appears to be the only one in the area with leaves and sap still flowing.

I am amazed by the variety of life that the sap wells feed as well as the unique characteristics of both the individual Sapsucker and this specific White Willow tree. Back in 2015, I remember seeing raccoons sniffing around the bottom of a tree with active sap wells. I did not see them feeding at the wells but they sure looked like they were considering the idea. Nature is amazing!

PS: For more about Sapsuckers you can read last winter's post titled, 'Brilliance'. 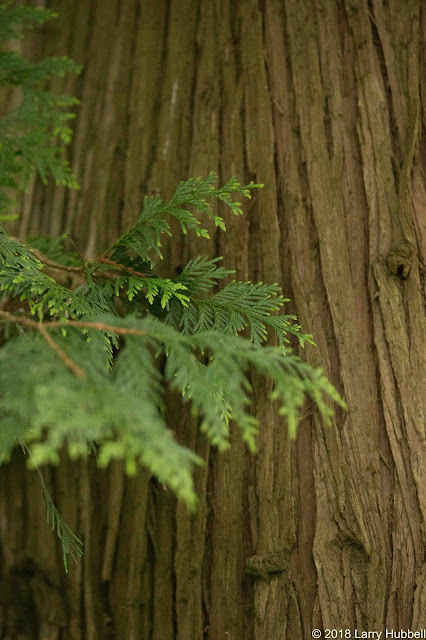 A) Is this tree native to Union Bay? What species is it? 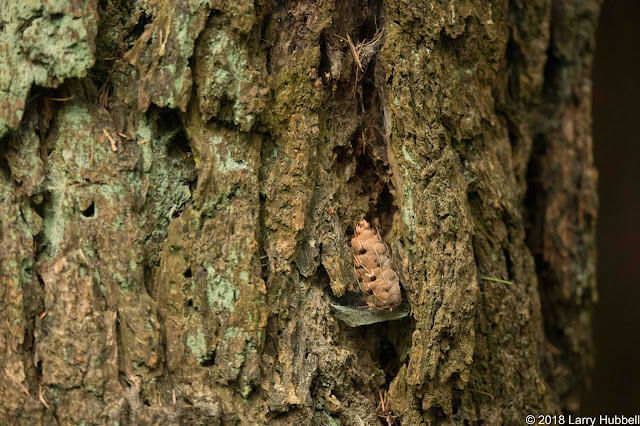 B) Is this tree native to Union Bay? What species is it?

Yes, both of these species are native to Union Bay and therefore better able to handle Sapsuckers than most Old World Trees.


My email address is: LDHubbell@Comcast.Net
Posted by Larry Hubbell at 5:21 PM